All 50 US states have their own quarters with George Washington’s image on the obverse, but their reverse designs are customized and differently styled. The idea was to group these coins into five sets and release them in circulation according to each state’s birthday. The process was finished when completing the series about ten years later.

Even though most Americans prefer coins from their native states, they also want to know how valuable state quarters from other states are and which one is the most expensive. As expected, most of these coins are widespread and are not particularly worth, but some of them are rare and surprisingly pricey. You can also find a few errors that collectors appreciate. Let’s take a look.

Various designers took part in these beautiful coins creation. John Flanagan designed a George Washington bust on the obverse, while you can see different reverse designs dedicated to each US state. 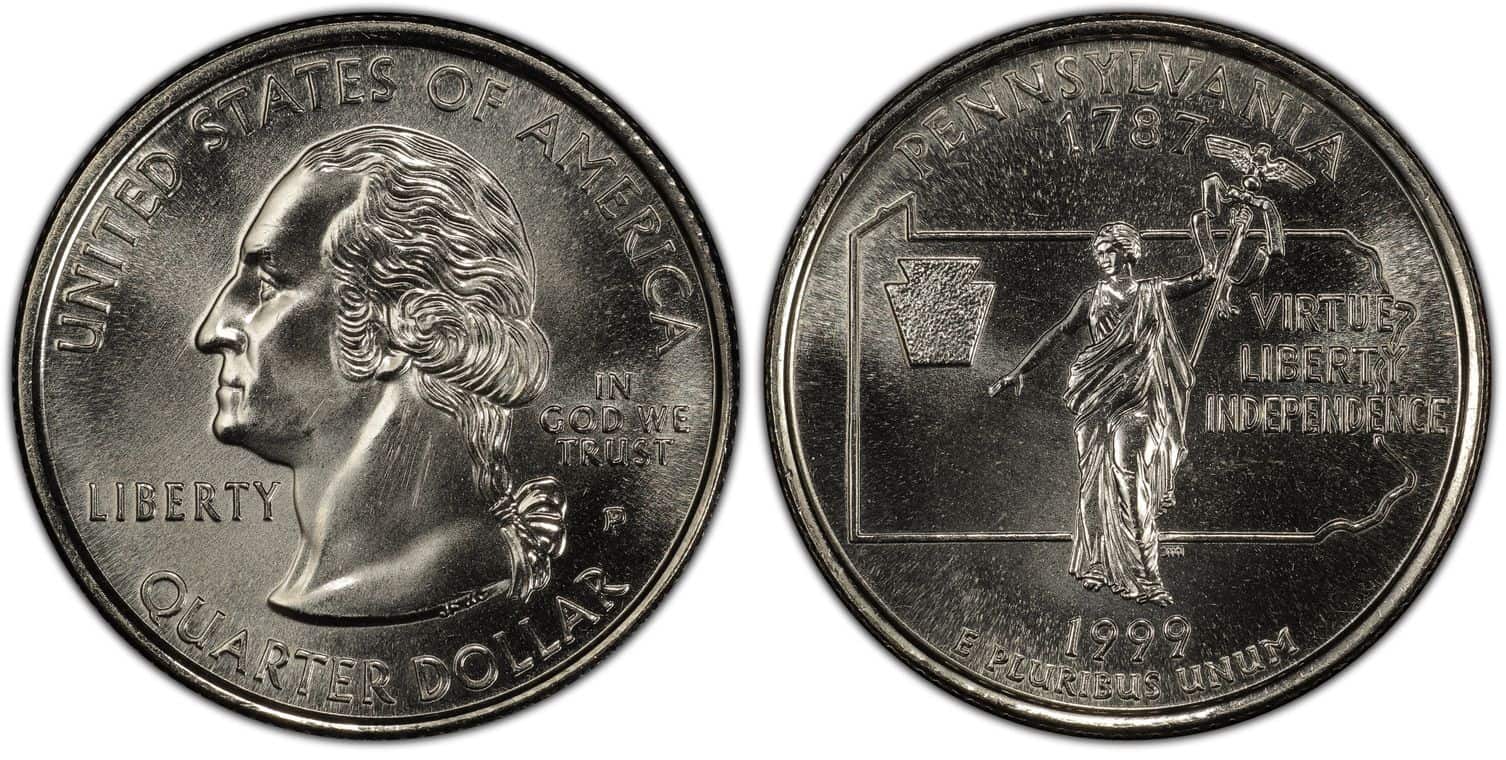 Pennsylvania got the honor of being the 2nd state to have a state quarter released in 1999. John Mercanti’s design came with the engraved state outline and the words VIRTUE LIBERTY INDEPENDENCE. 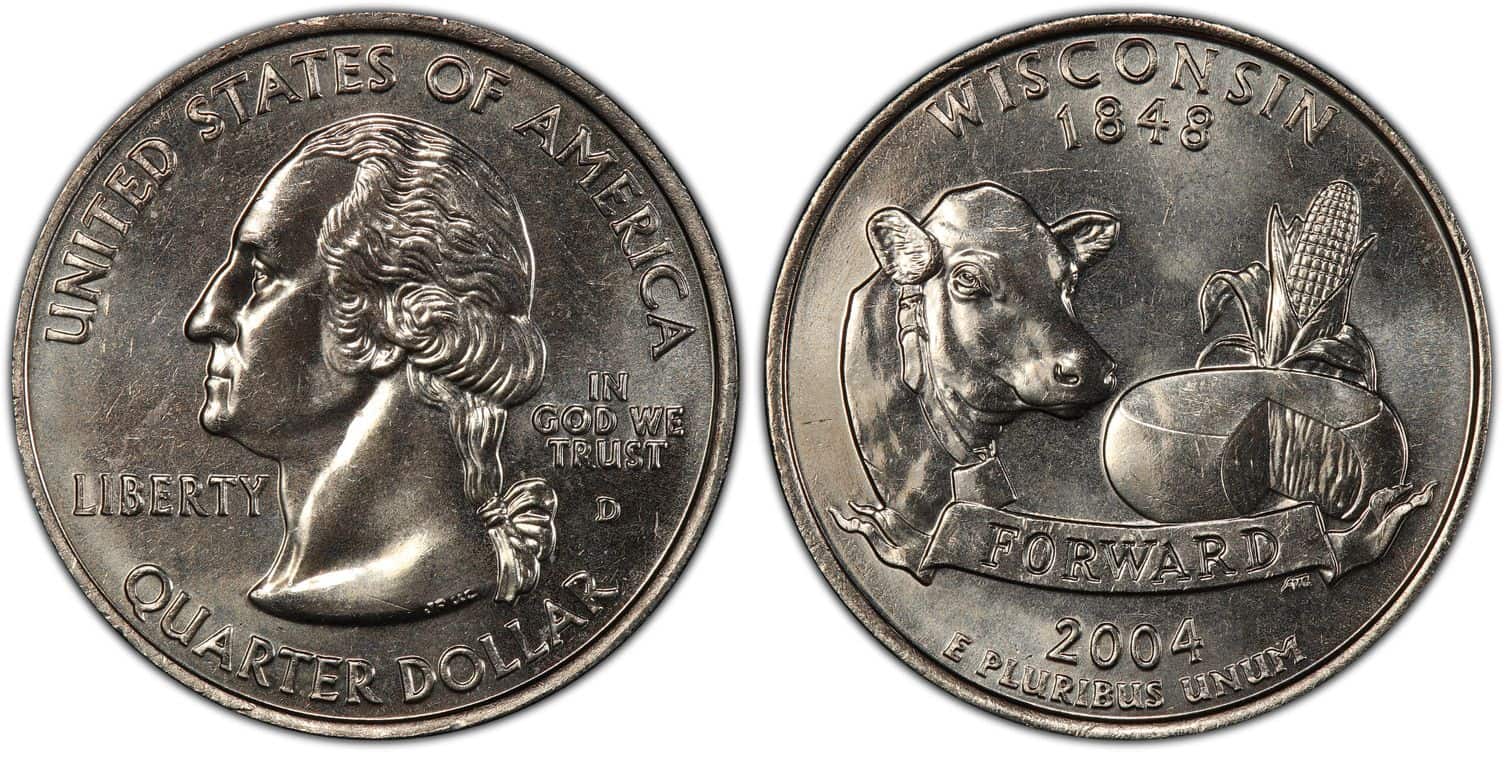 Alfred Maletsky designed this great coin’s reverse, but it appeared in three possible varieties. You can find coins with regular strikes and those with an extra leaf placed low or high on the left corn cob’s bottom.

Since no one exactly knows how many of these error coins were released in circulation, one collector set aside $6,000 for one with an extra leaf low in 2020. The most expensive piece with extra leaf high was sold at auction in 2006 for $2,530. 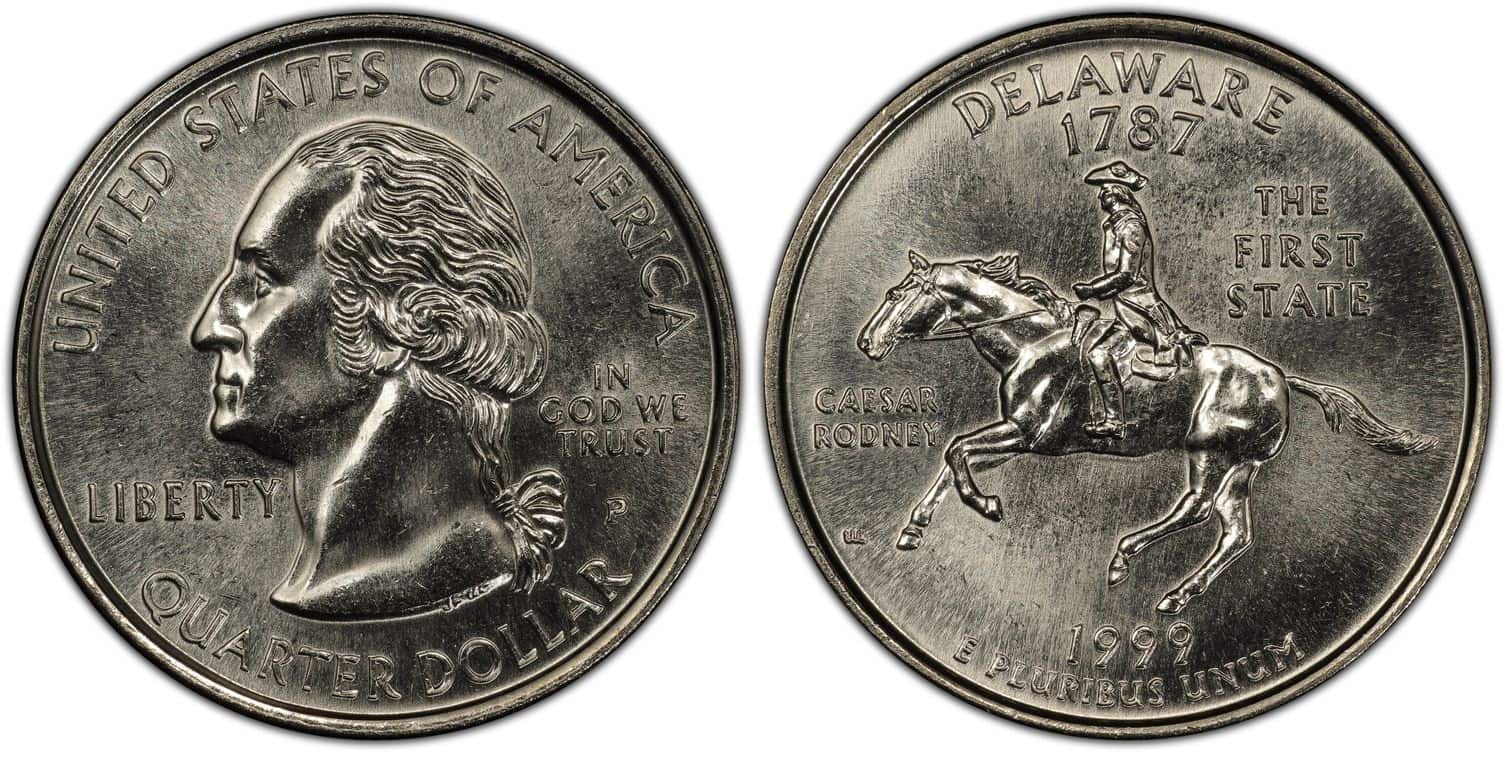 Many people love Delaware quarter because of the historical significance of the Caesar Rodney horseback ride. The Philadelphia mint struck 373,400,000 coins this year, including a few error coins, so-called die crack spitting horse. 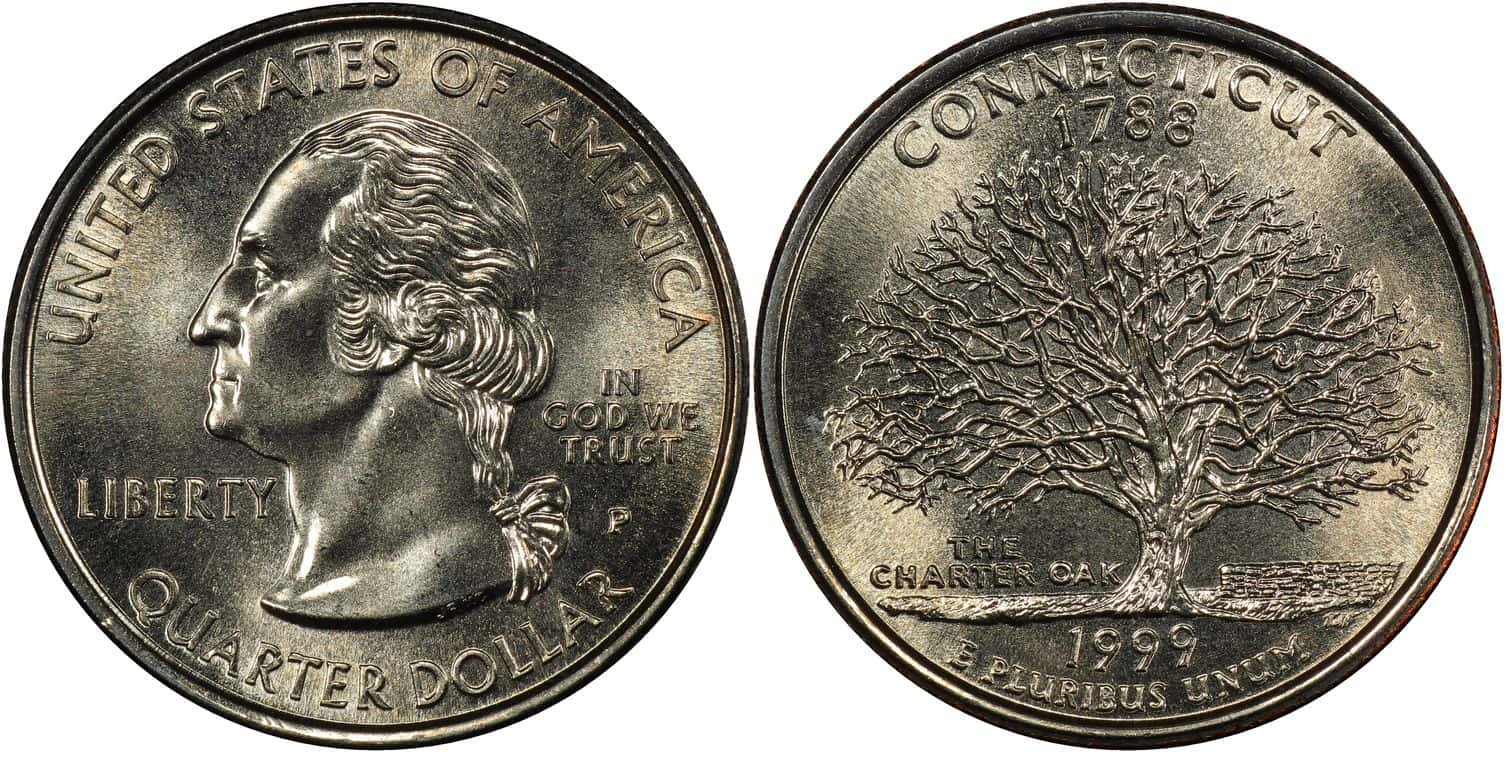 Connecticut quarter displays a Charter Oak Tree where the state’s original Constitution was hidden during turbulent times in American history. James Ferrell faithfully depicted the beloved tree with the added 1788 when this state became a member of the new country. 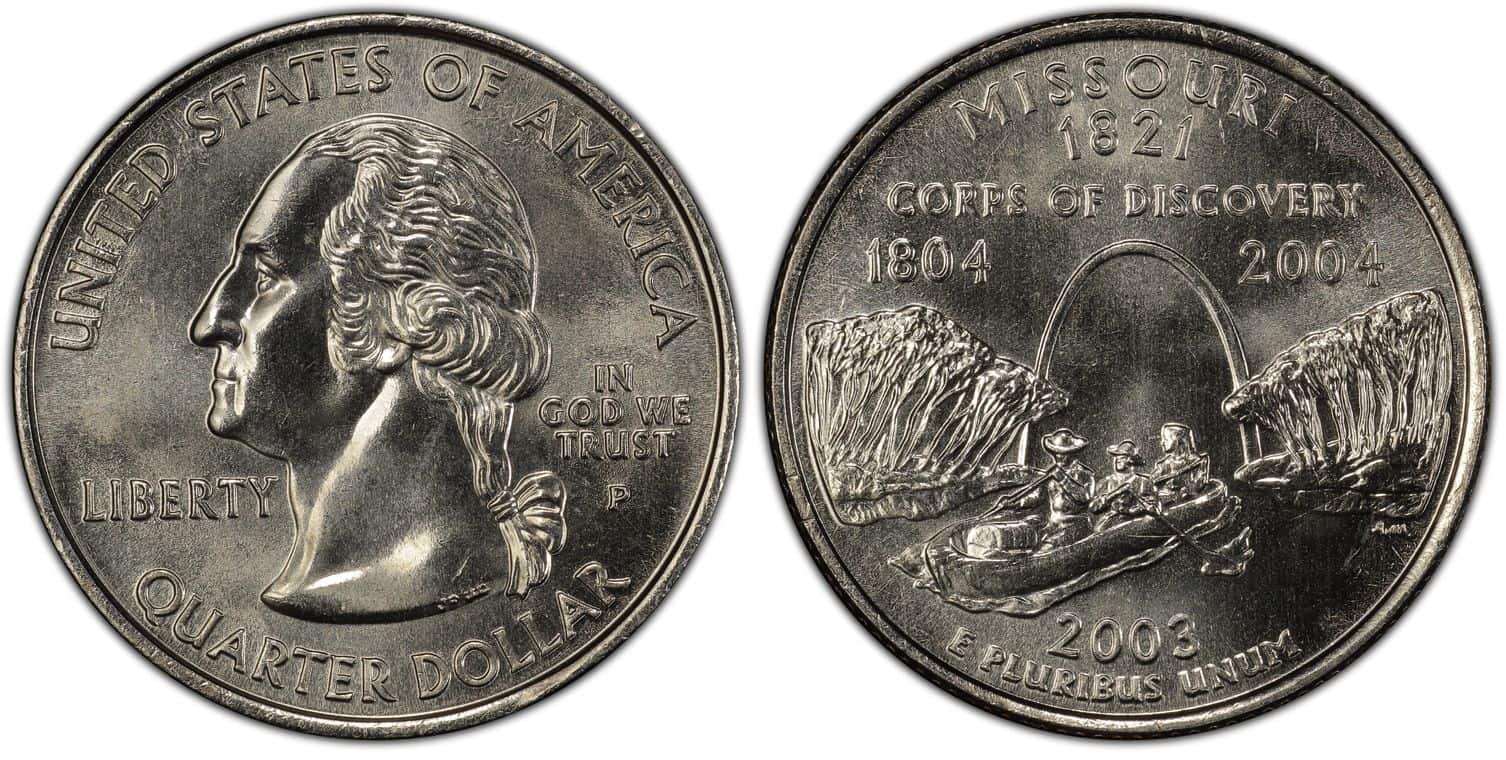 Philadelphia mint produced 225,000,000 Missouri quarters in 2003 with beautiful Alfred Maletsky design. They presented Lewis and Clarke rowing a boat along the Missouri River with the Gateway Arch proudly towering over them from the background.

You can also see an inscription CORPS OF DISCOVERY and the year 1821 when this state became a part of the new nation. One collector paid $4,313 at an auction in 2007 for this coin, while the regular price for most other pieces struck this year is modest $0.67 to $1.43. 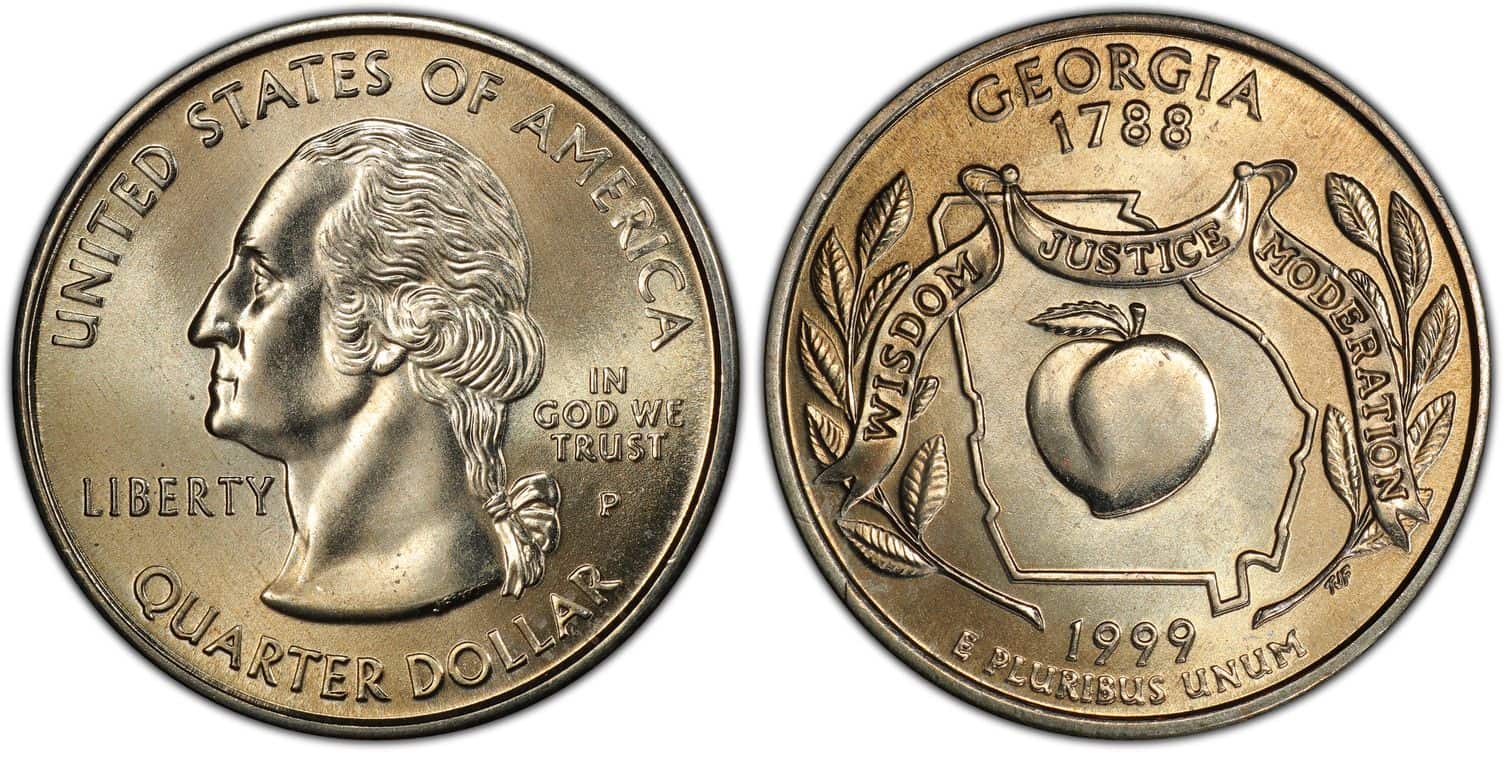 James Ferrell designed this coin, symbolizing this state’s motto JUSTICE, WISDOM, AND MODERATION. You can see a large peach surrounded by oak leaves in front of the state outline and the 1788 year when Georgia became a part of the union. 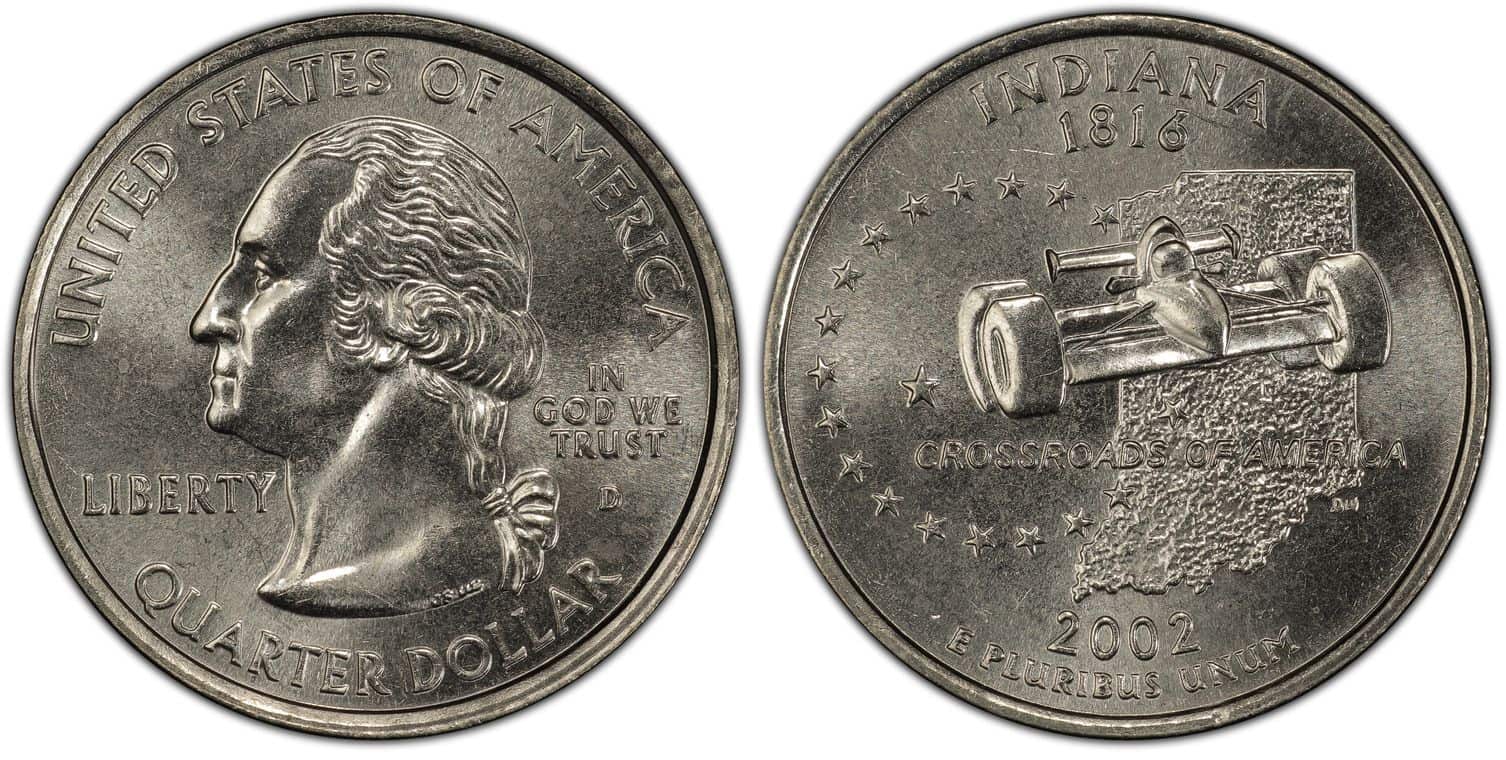 The Denver mint issued 327,200,000 Indiana state quarters in 2002, typically worth $0.67 to $1.43. Designer Donna Weaver did an excellent job with the inscription CROSSROADS OF AMERICA and engraved race car Indy Care over the state outline. This particularly beautiful coin in the mint state was paid $3,760 in 2017 at an auction. 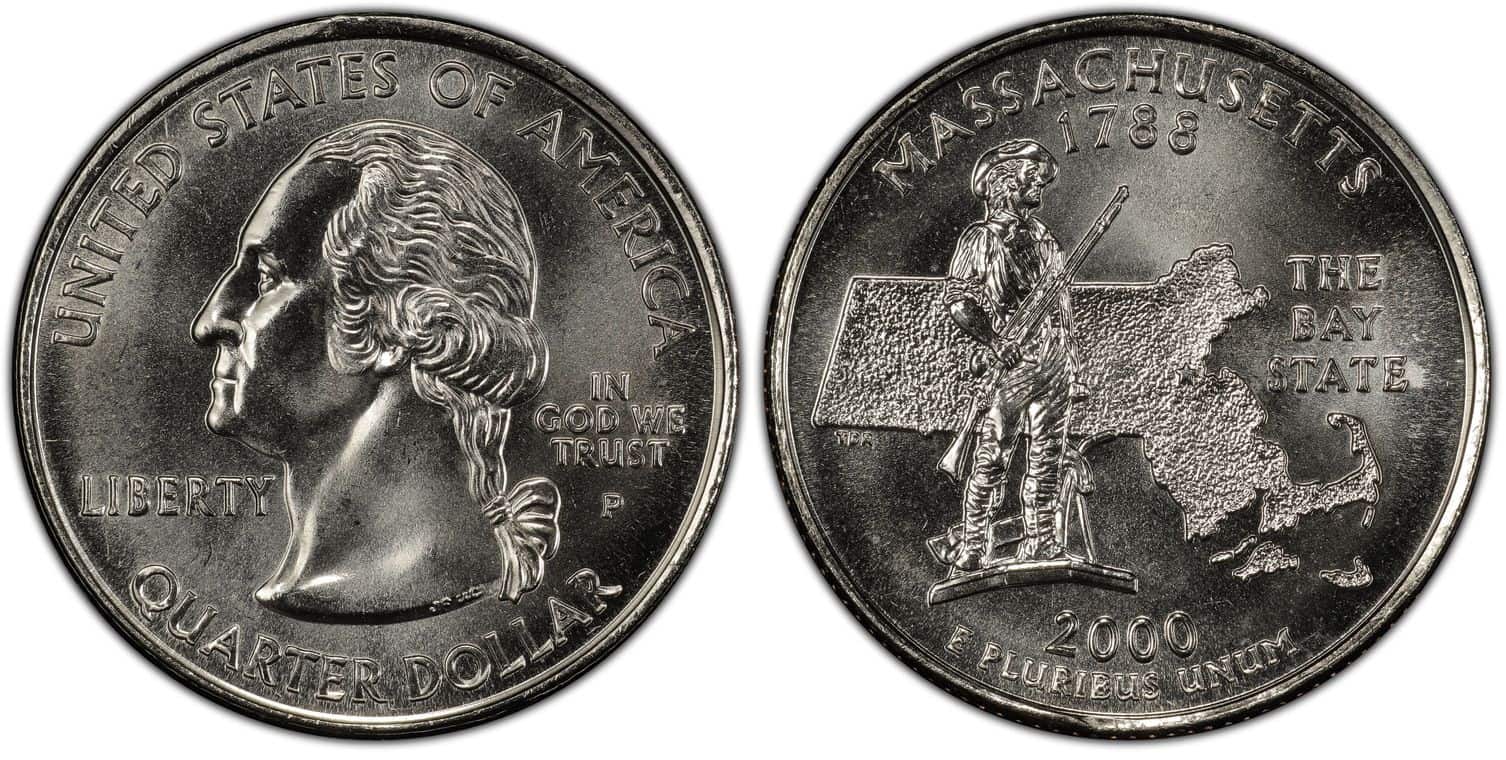 Thomas D. Rodgers designed the Massachusetts State quarter with a Minuteman statue in front of the state outline. The year 1788 is above his head, while the words the BAY STATE are placed on the right. 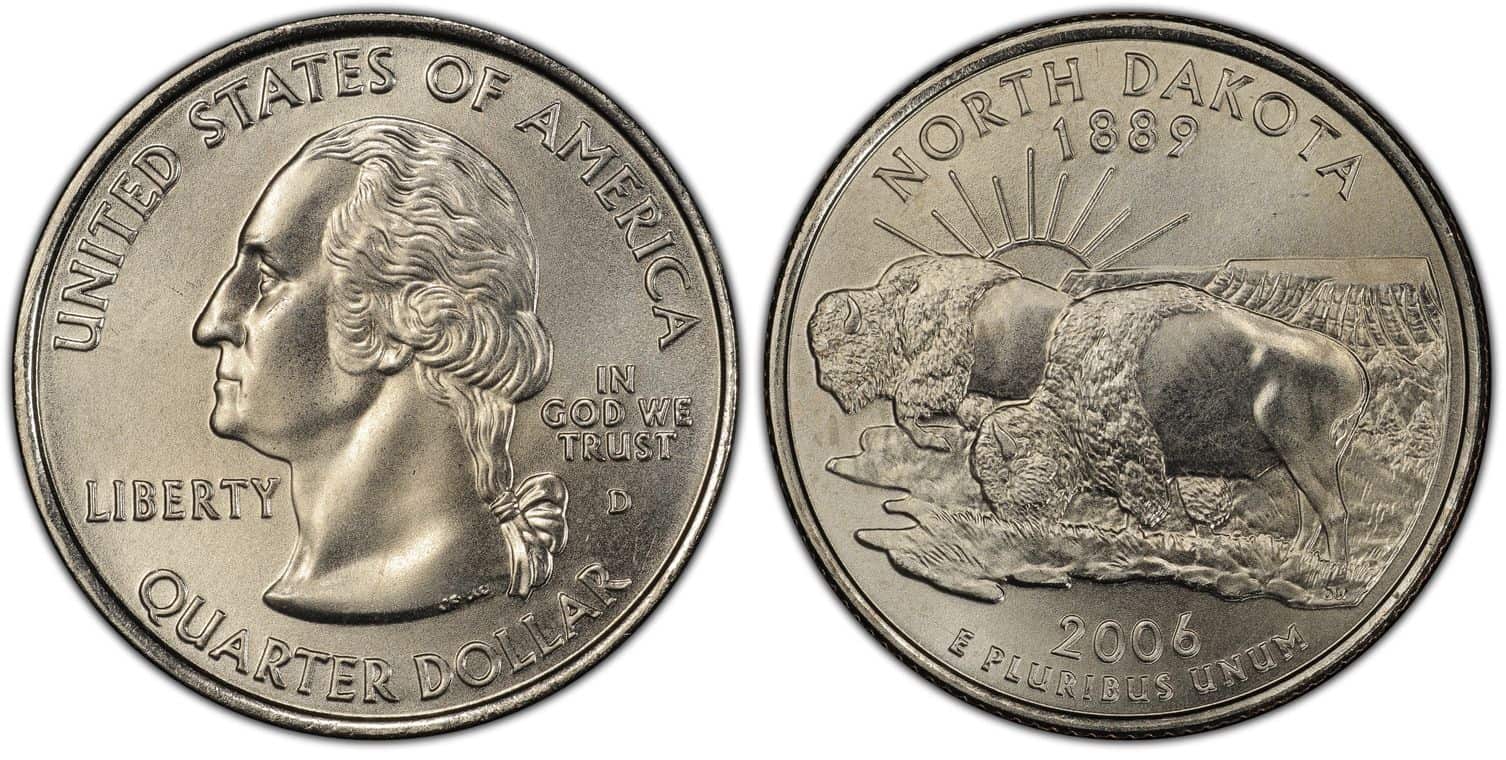 Donna Weaver created an attractive coin reverse showing two American Bisons with half a sun and the Badlands in the background. 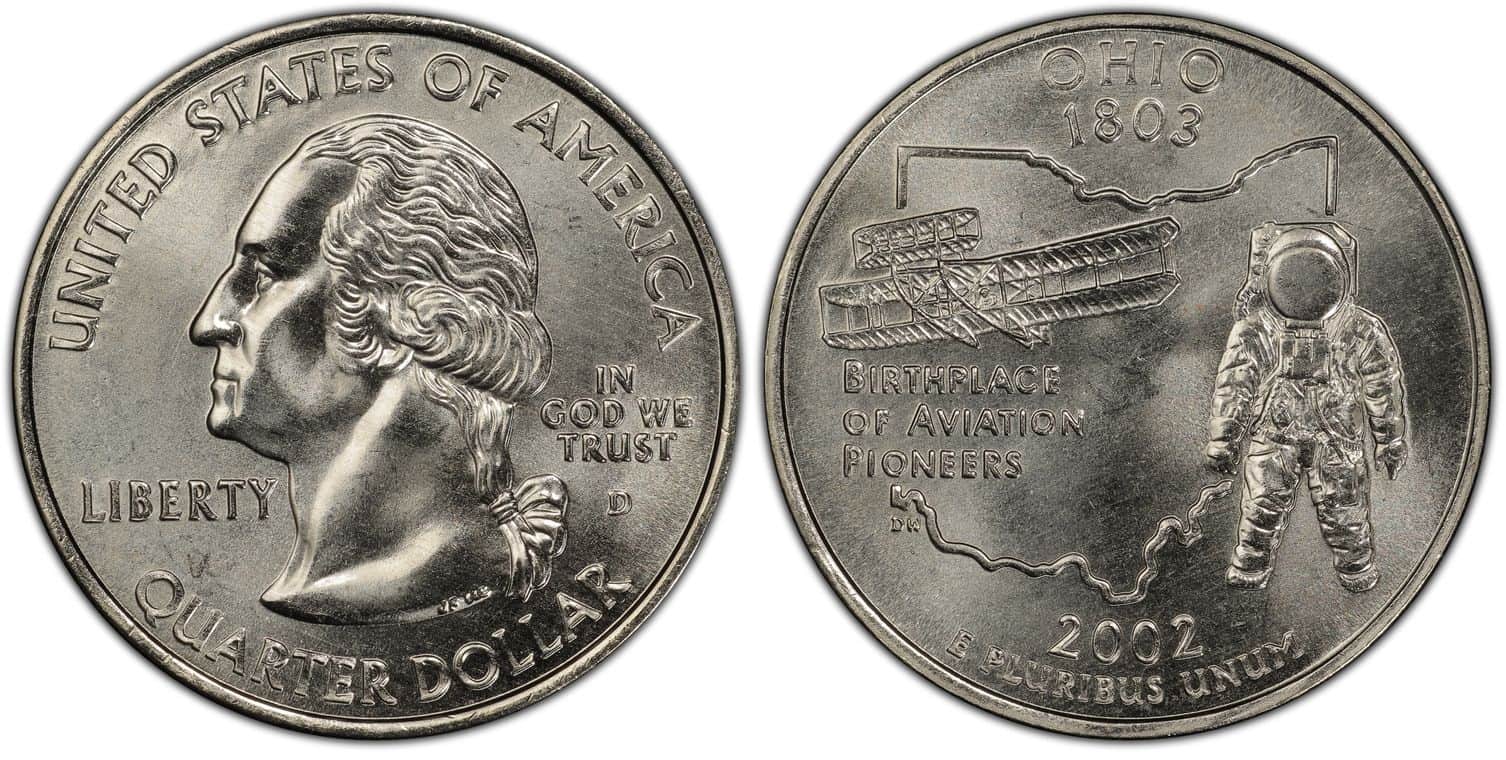 By Donna Weaver’s design, the Denver mint struck 414,832,000 Ohio quarters in 2002. It shows an old airplane, Wright Flyer, and astronaut Neil Armstrong standing beside the words BIRTHPLACE OF AVIATION PIONEERS. 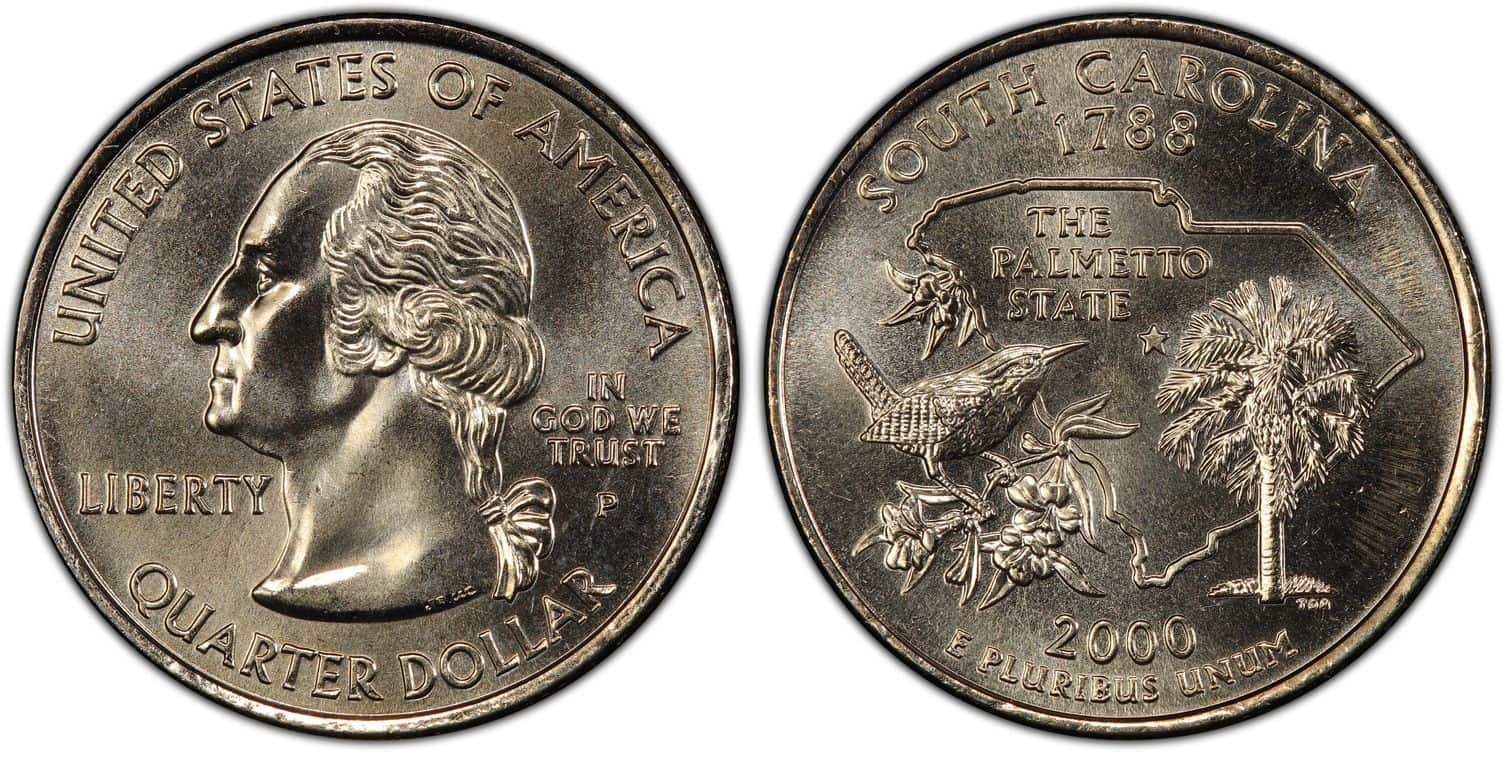 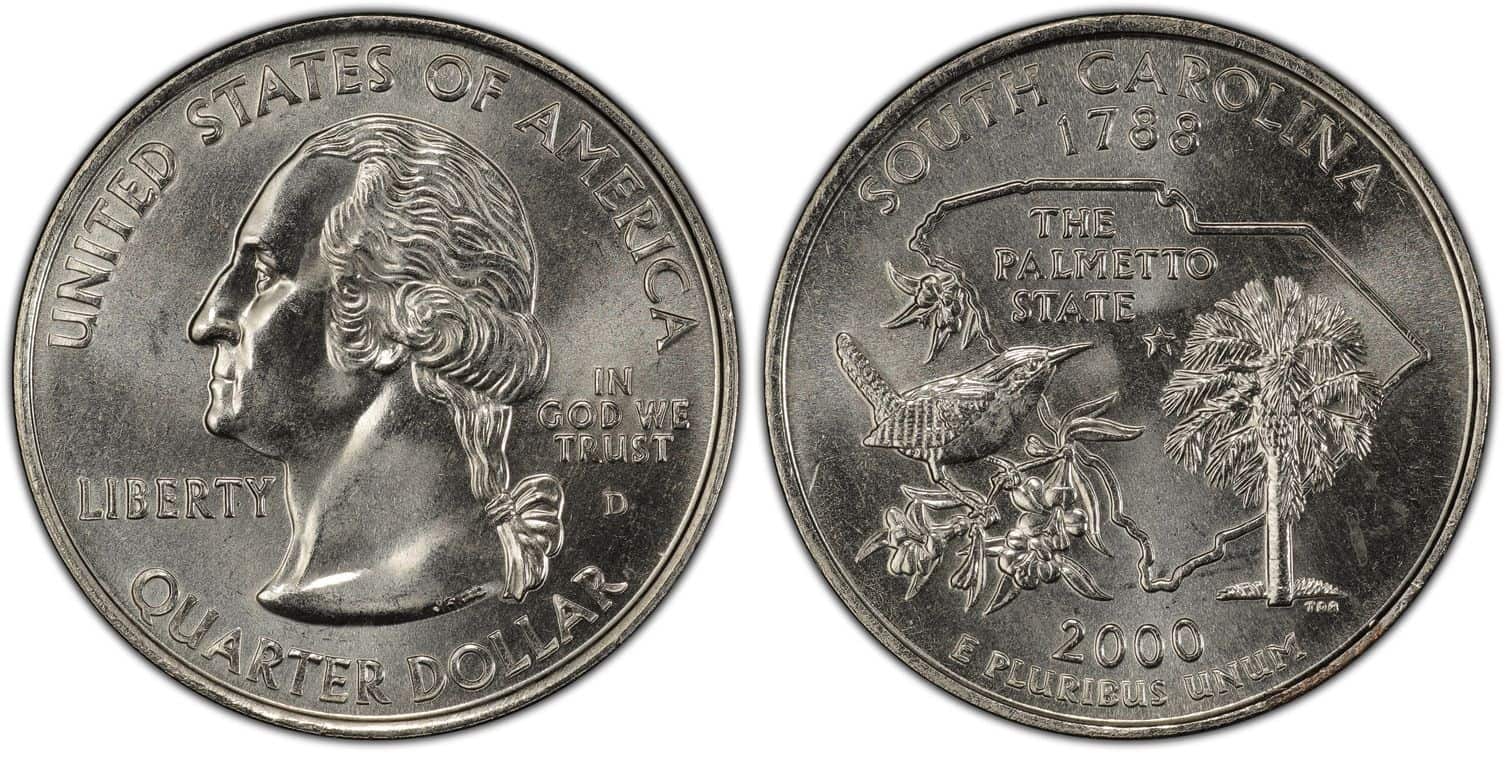 Thomas D. Rogers engraved the South Carolina State quarter, and the US mint released it in 2000. You can see the state outline on the reverse with the PALMETTO STATE inscription, a states bird Carolina Wren, and a palm tree in front.

However, these two fantastic coins won auction records. The first one produced in Philadelphia was sold at auction for $3,525 in 2017, while one collector paid $2,990 for the specimen struck in Denver in 2003. 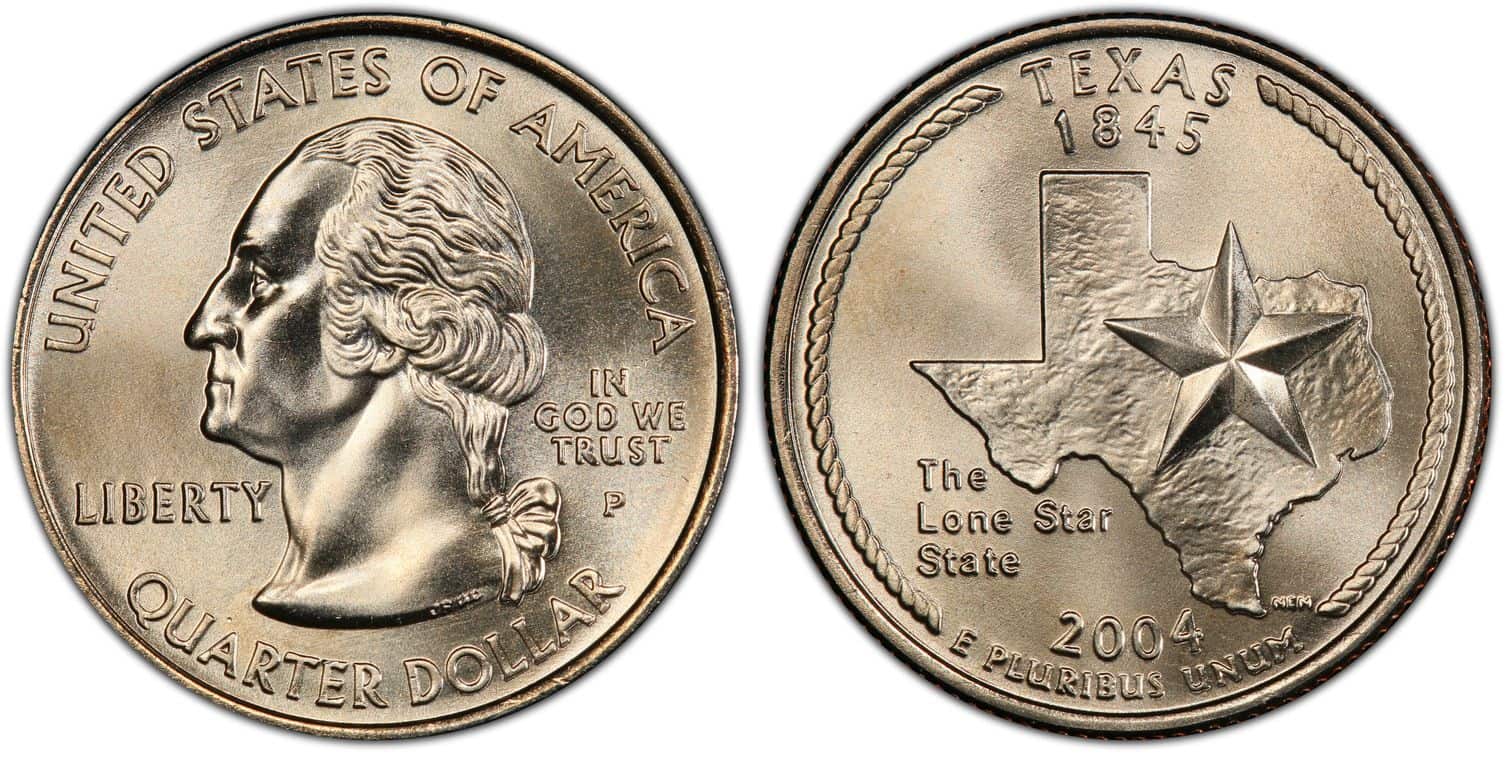 Even though the Texans wanted their quarter to be more sizable than others, the mint refused their request. However, Norman E. Nemeth still designed an imposing coin reverse with a Texas state outline. 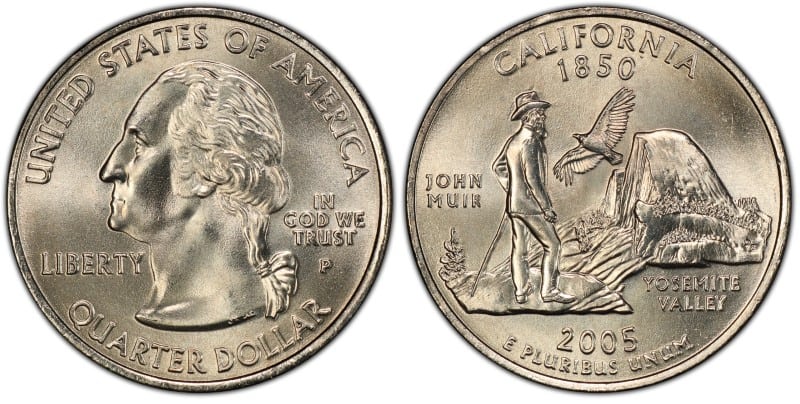 Don Everhart engraved this precious coin, released in 2005. On the reverse, you can see a Scottish-born naturalist, John Muir, and California Condor. There was also the Yosemite Valley and the 1850 year when this state became a part of the new country. 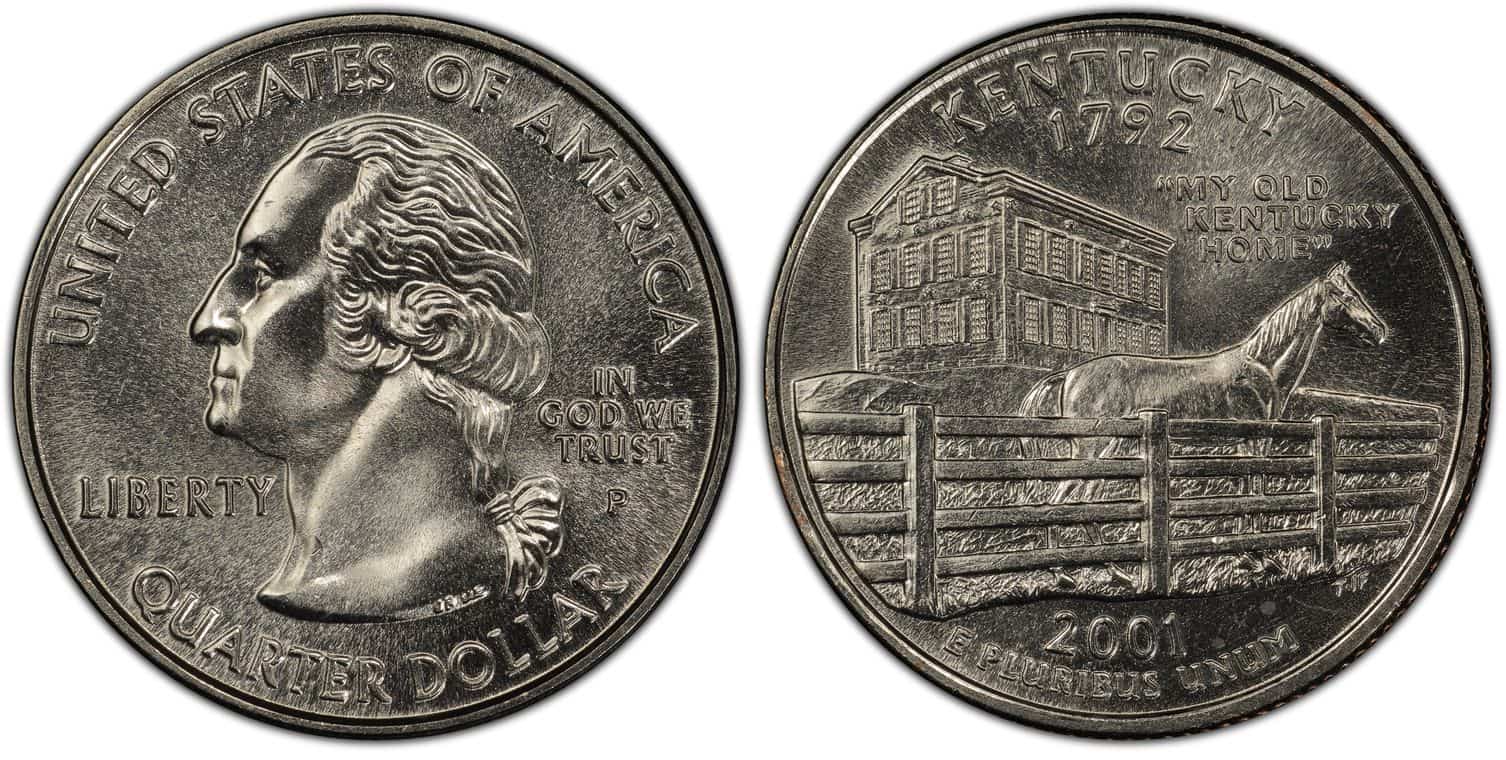 The Philadelphia mint produced 353,000,000 Kentucky quarters worth $0.67 to $1.43 on the current market. T. James Ferrell did an excellent job by placing the Bardstown Mansion, a horse, and MY OLD KENTUCKY HOME inscription on the reverse. This particular specimen was paid $2,585 at an auction in 2017. 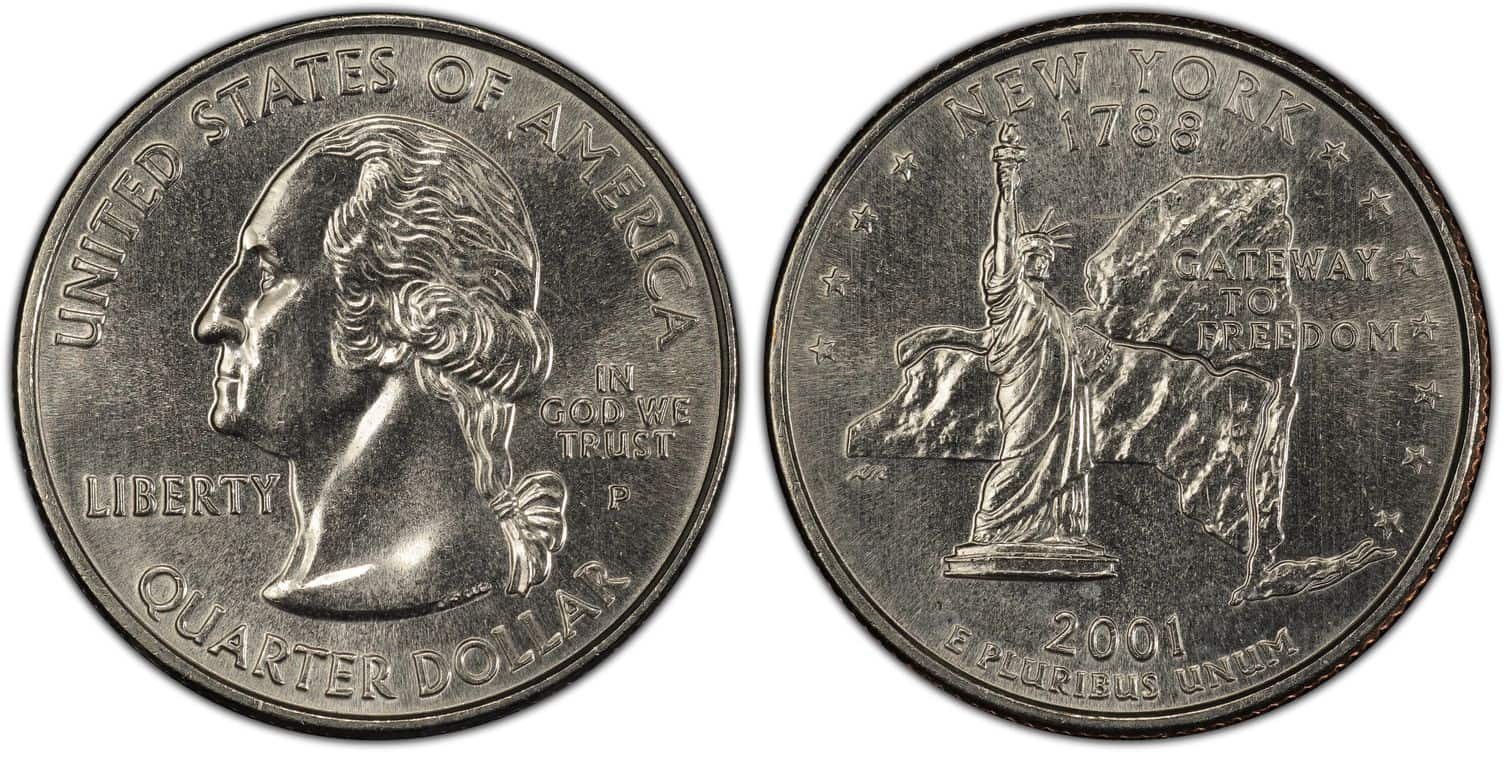 Alfred Maletsky designed the New York state quarter, and the Philadelphia mint produced 655,400,000 pieces in 2001. Even though these coins are inexpensive and you can find them at the price of $0.67 to $1.43, one collector set aside $2,585 for a specimen in practically perfect condition in 2017.

These quarters have attractive reverses containing the Statue of Liberty. However, the most impressive part is the inscription GATEWAY TO FREEDOM, symbolizing the essential value woven into the foundations of the USA. 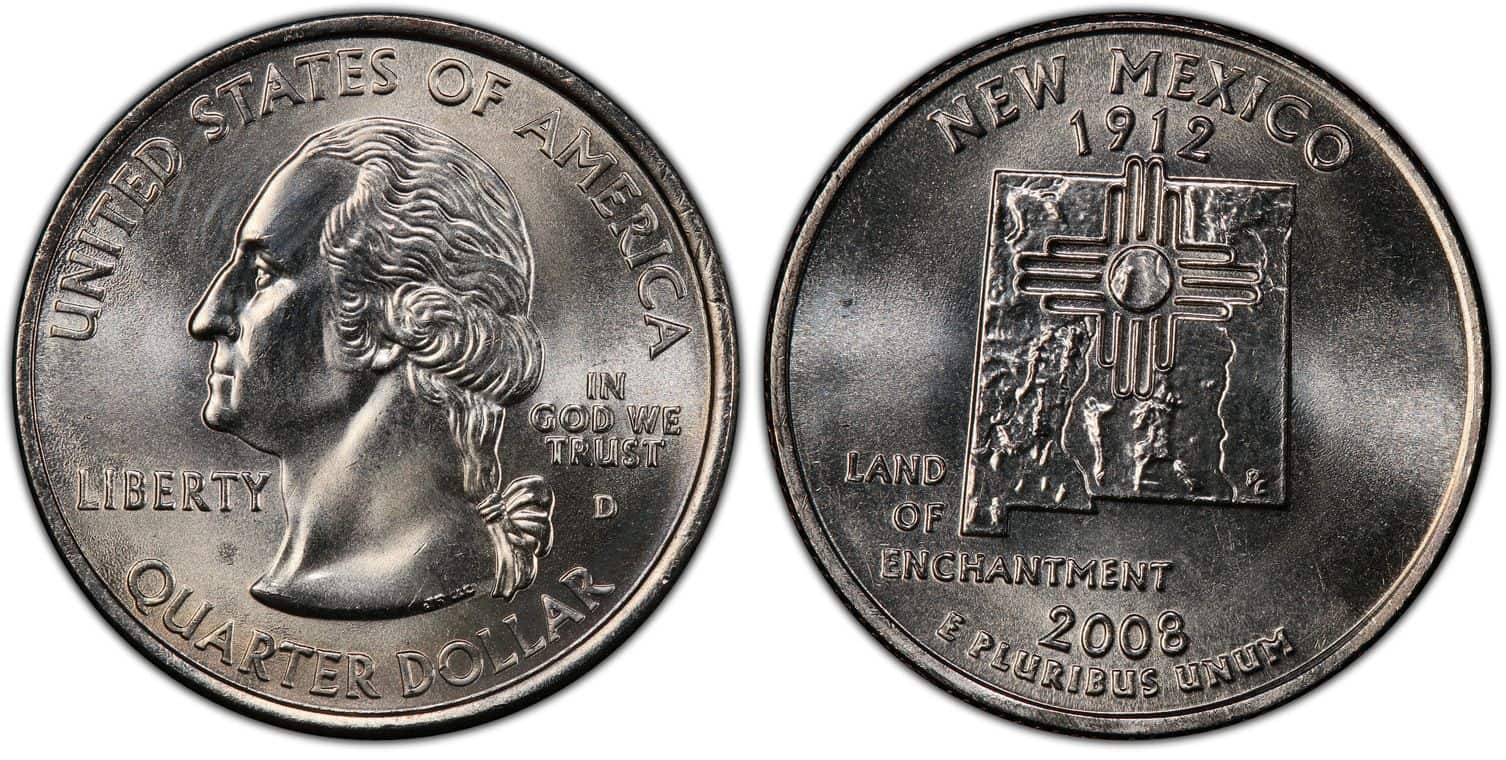 Don Everhart created a unique design for this quarter by engraving the Native American Zia sun. The motto, the LAND OF ENCHANTMENT, is next to the topographical state outline, while above the composition is 1912, symbolizing the year when New Mexico joined the US. 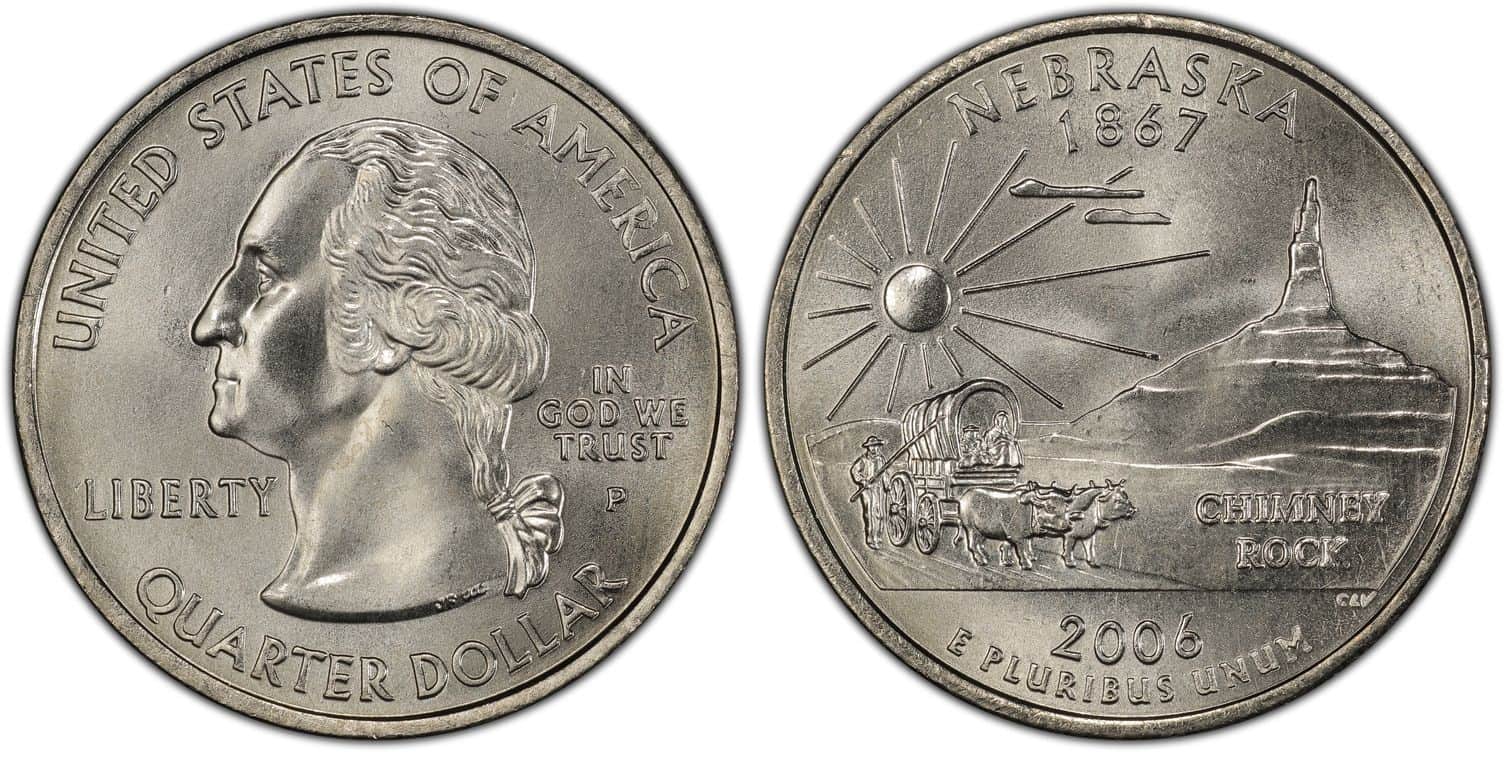 In 2006, the Philadelphia mint struck 318,000,000 quarters, according to Charles Vickers’ reverse design. It includes a Covered Wagon pulled by oxen that passed by Chimney Rock under the hot Nebraska sun. 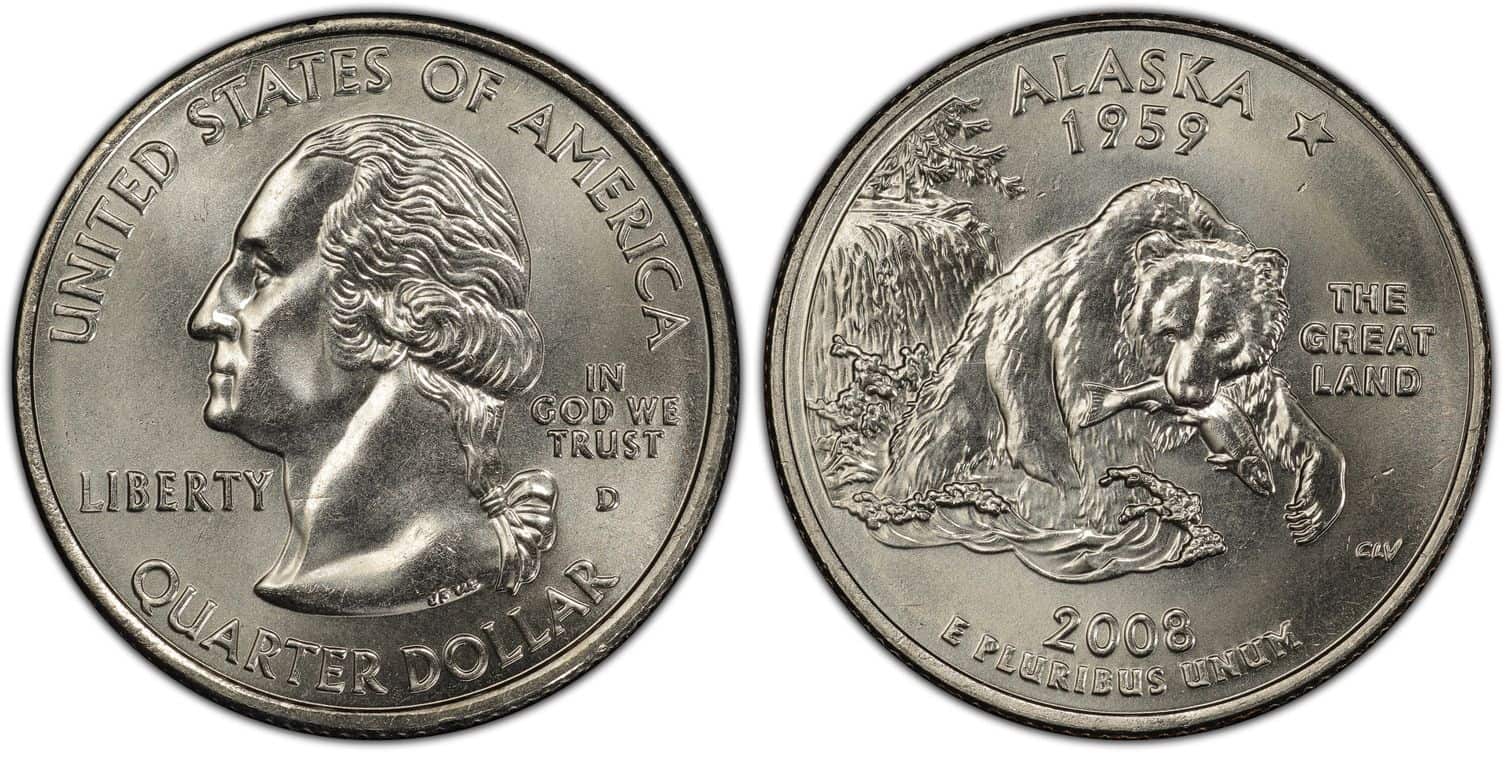 Besides the GREAT LAND motto, Charles Vickers successfully showed beautiful Alaska’s natural wildlife. The central position is reserved for a grizzly bear holding a state fish, salmon, in its jaw. You can also see the North Star and the year 1959 above. 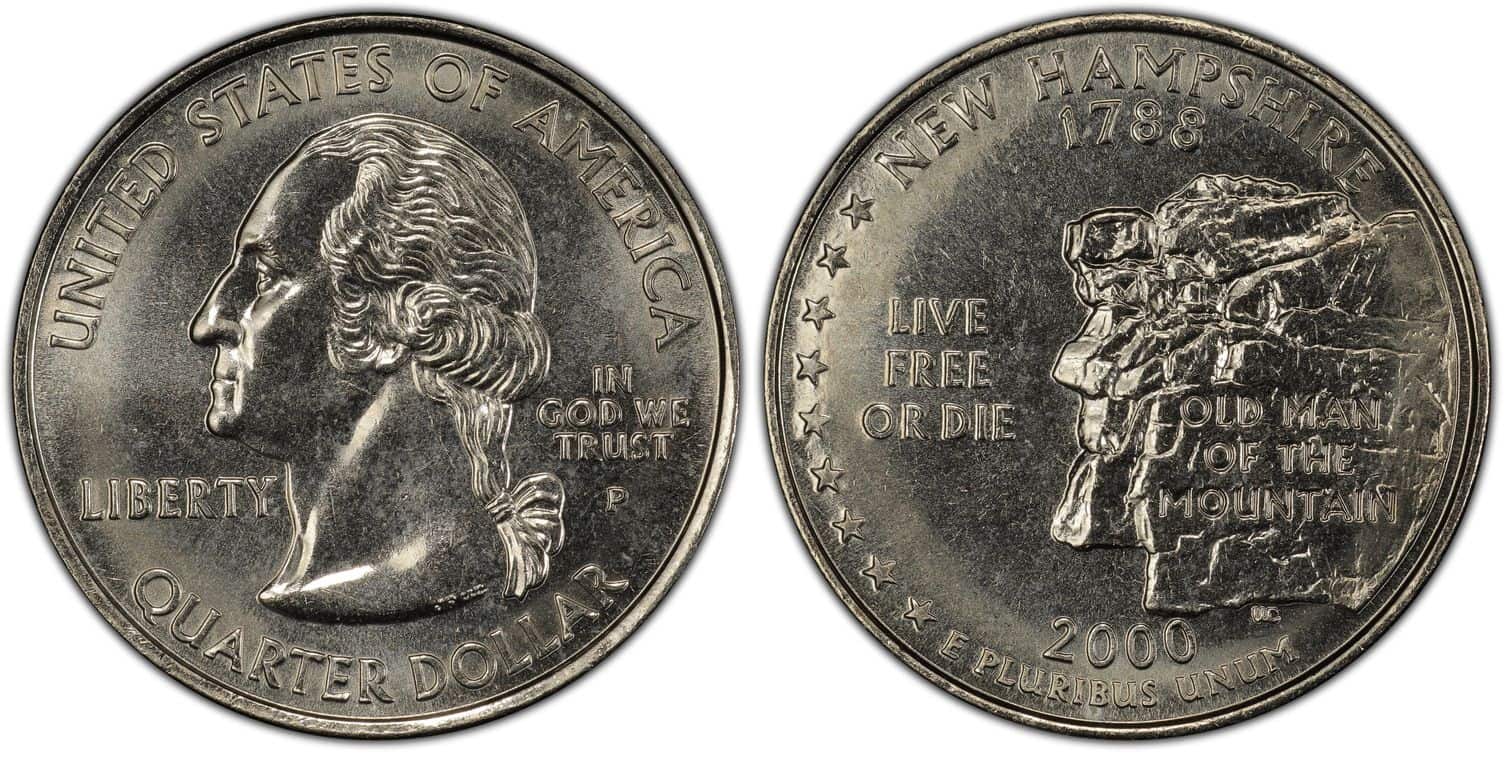 William Cousins created a beautiful New Hampshire quarter design, and 673,040,000 of these coins were minted in Philadelphia in 2000. Besides nine stars and the motto LIVE FREE OR DIE, you can see the inscription Old Man of the Mountain engraved on a sizable rock typical for this state.

According to the USA Coin Book, these coins’ price is $0.67 to $2.28 on average. However, one extraordinary specimen in the mint state reached an auction record after one collector paid $2,128 for it in 2004. 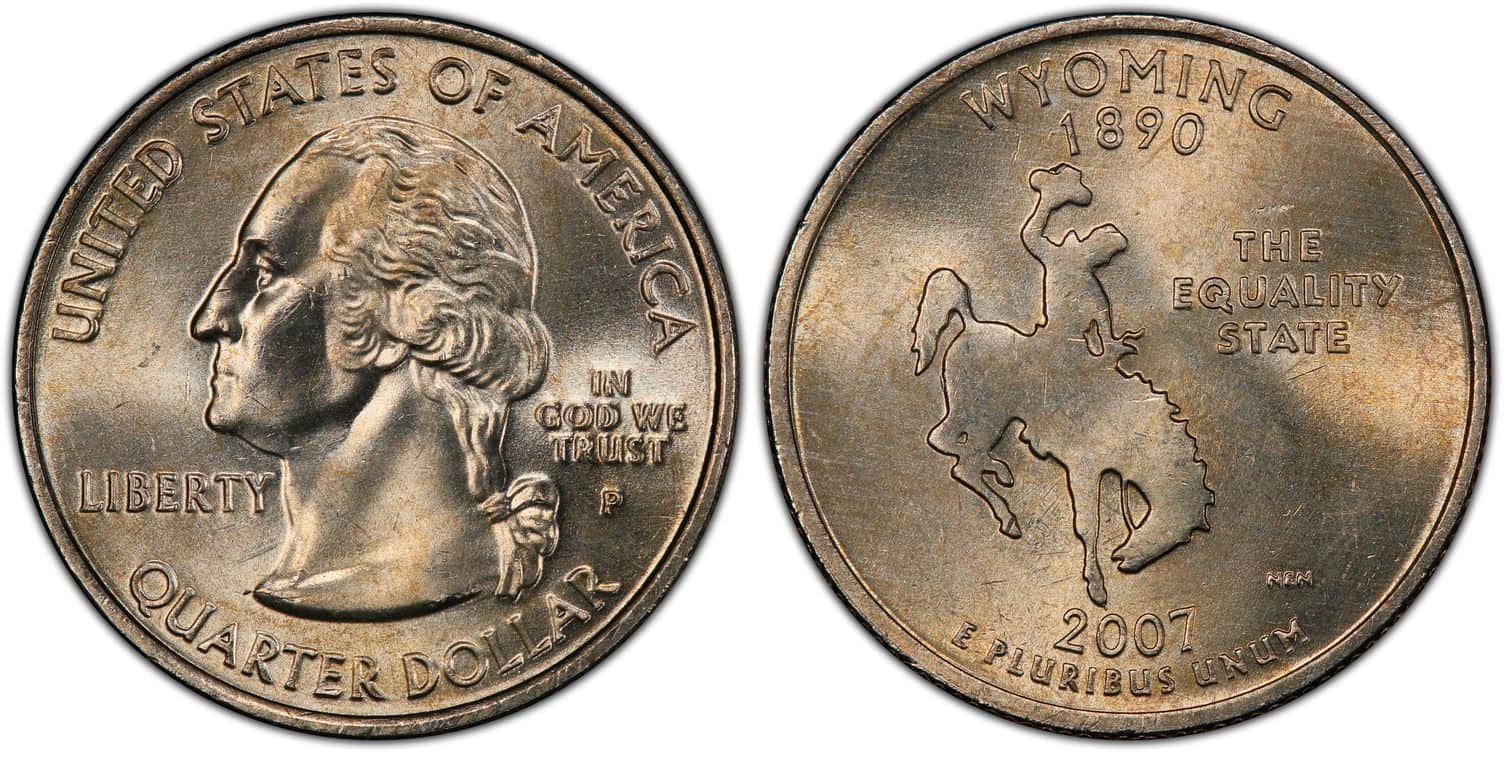 Wyoming quarter is the 44th coin released in the series since this state became a part of the union in 1890. The  EQUALITY STATE motto was added in honor of the first territory that granted women the right to vote in 1869. The central figure is a bucking horse and rider image symbolizing the wild west heritage.

Each US state has its own quarter with George Washington on the obverse and a unique motif on the reverse. These coins are abundant on the market and typically are worth 25+ cents. Still, you can get serious money for several rare proof pieces and popular errors from Delaware, Alaska, Kansas, Wisconsin, and Minnesota.

Where can I take my quarters that match these to be sure of their value?