The Liberty Head nickel (V nickel) is an American five-cent coin minted from 1883 to 1912. However, at least five of these coins were secretly minted in 1913, making them pricey. In most cases, the V nickel value depends on the date, preservation level, and possible errors.

While those produced before 1897 are typically expensive, most are worth $100 to $200. However, you can find a few rare coins worth thousands of dollars and highly expensive mysterious 1913 Liberty Head nickels worth millions. Are you intrigued? Let’s go!

Interestingly, the first 5.5 million coins were without the mark CENTS. Unfortunately, it was an excellent opportunity for counterfeiters since the new nickel was almost identical to the five-dollar gold coin.

Possible gold-plating the nickel would lead to problems, so Barber promptly modified the design and added the word CENTS on the reverse. The redesigned nickel appeared on 26th June 1883.

There was one more uniqueness about these coins. Even though these nickels’ mintage stopped in 1912, five pieces were mistakenly struck in 1913, and collectors included them among the rarest American coins ever minted.

The V nickels are beautiful five-cent coins with a Lady Liberty on the obverse. Except for pieces minted in San Francisco in 1912 and only five coins struck in Philadelphia in the last minting year, these coins’ mintage was high for that time.

The obverse of the Liberty Head nickel (V nickel) 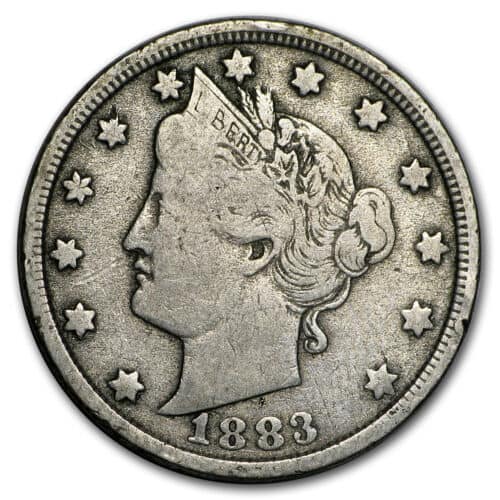 You can notice that Charles E. Barber added the word LIBERTY discreetly written on her coronet and a wreath of wheat, corn, and cotton inserted in her hair. Thirteen stars framed a beautiful portrait, symbolizing the first states, with the DATE on the bottom.

The reverse of the Liberty Head nickel (V nickel) 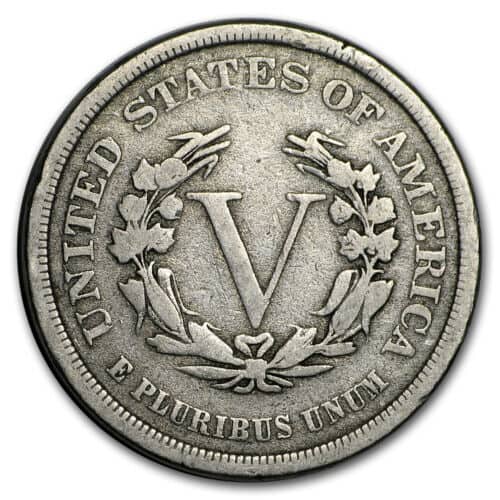 This five-cent coin got its name after the Roman number five, reminding the letter V on the reverse. Around the centrally placed figures are struck corn, wheat, and cotton stalks entwined in a wreath.

The first version from 1883 had the required words UNITED STATES OF AMERICA and E PLURIBUS UNUM surrounding the whole composition. All other coins have the country name and the Latin motto stretched along the top rim with the word CENTS below the wreath.

Other features of the Liberty Head nickel (V nickel)

Besides, they had a plain edge and thickness of 0.07677 inches (1.95 mm). Since the entire series was minted in Philadelphia except for coins struck in 1912, they come without the mint mark. Only pieces produced the last year have the letter S or D on the outside dot that separates the words UNITED and CENTS.

In most cases, the V nickel value is pretty modest for such an old coin, but you can notice that coins from five minting years are highly expensive and collectible. Collectors always pay over $1,000 for them in rare situations when they appear at auctions. 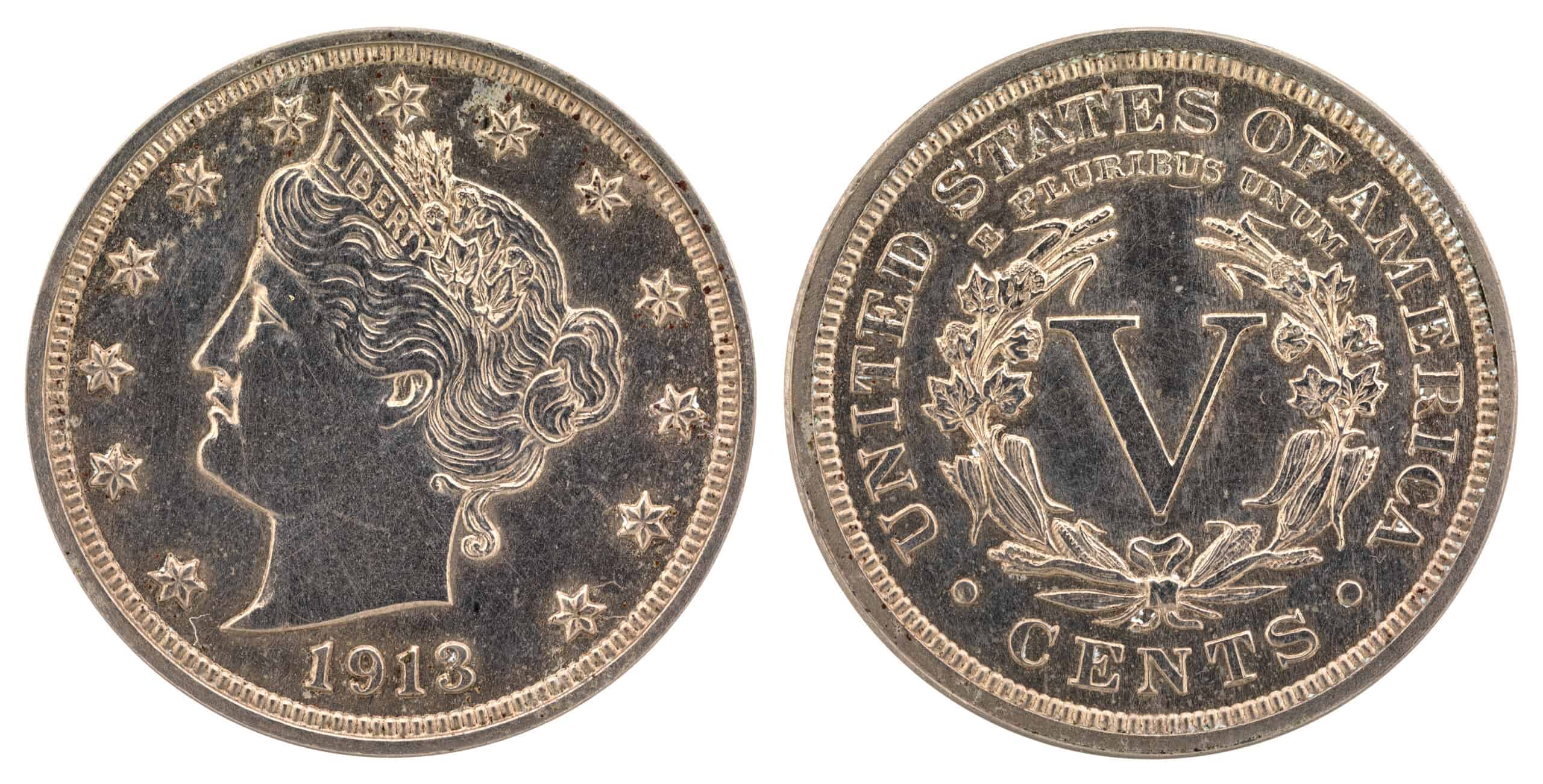 Undoubtedly, the most pricey Liberty Head nickels are rare five pieces struck in 1913 in the Philadelphia mint under mysterious circumstances. One of those proofs reached an astonishing $4,566,149 at an auction organized in 2018. 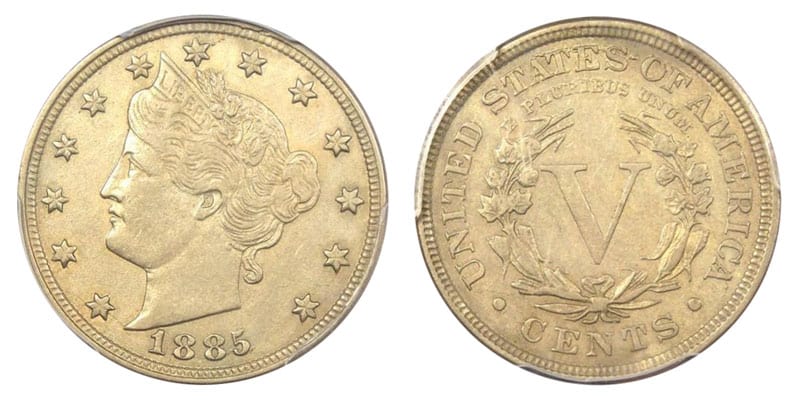 The next valuable and scarce piece is the 1885 Liberty Head nickel. This lovely coin is worth $600 to almost $4,000, depending on the preservation level. Interestingly, proofs are often less expensive than nickels from regular strikes in an extra fine condition. 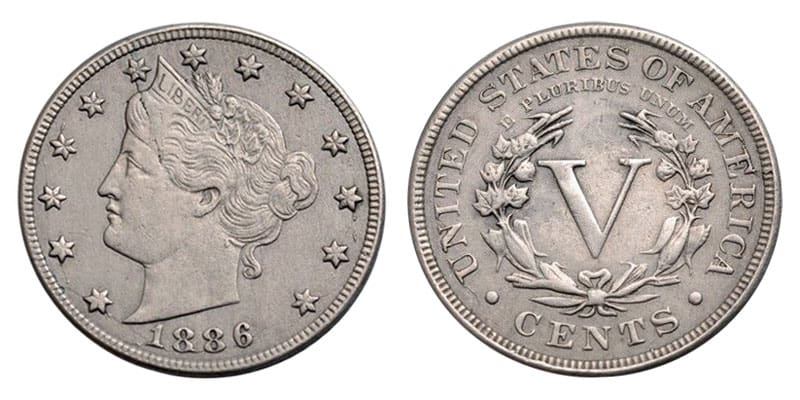 The V nickels minted in 1886 are collectible coins you can rarely see on the market. Once they appear at an auction, you can expect a price range of $300 to $2,960 for regularly struck coins, while proofs are estimated at $720. 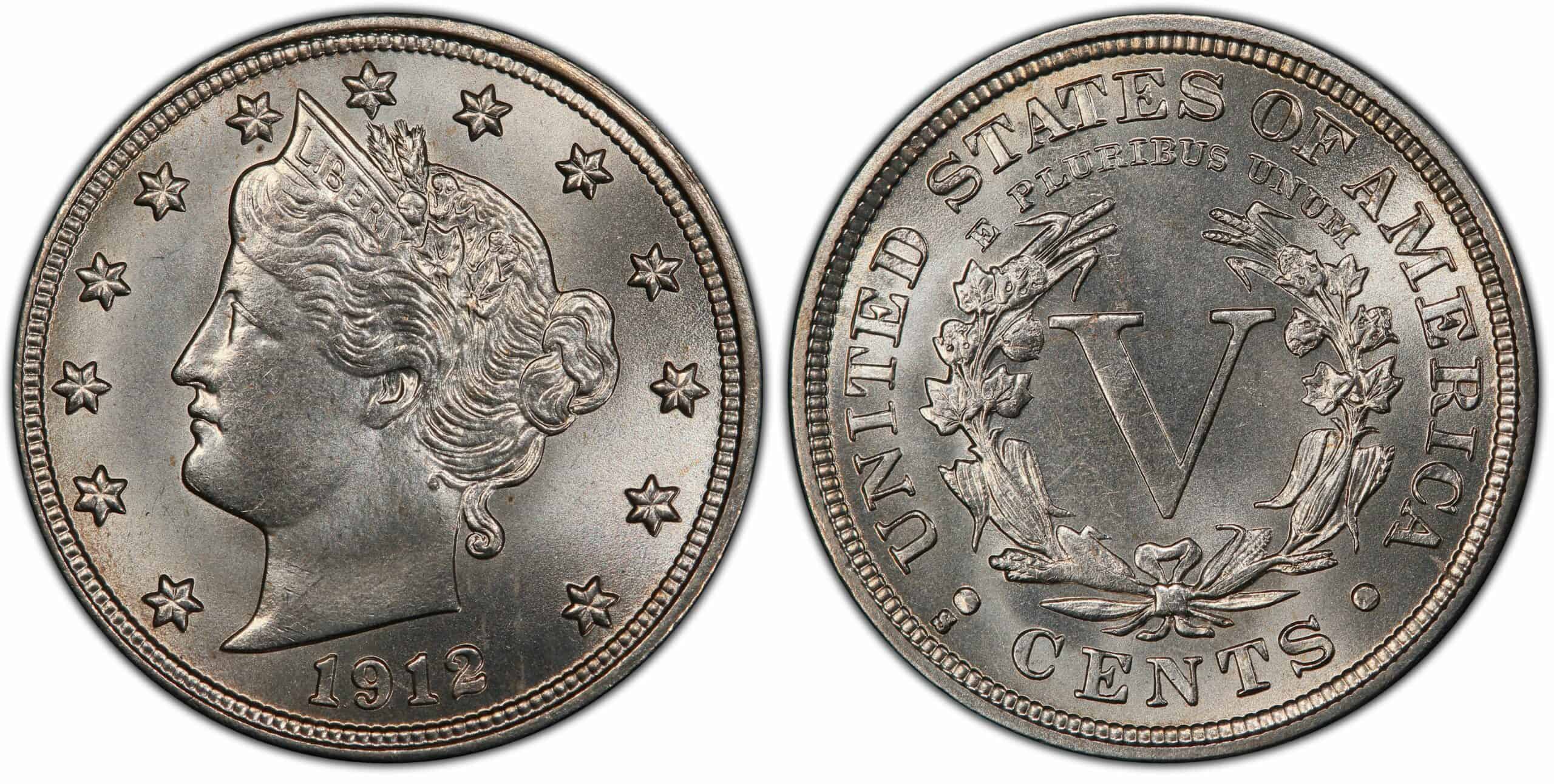 Unlike 1912 Liberty Head nickels from Philadelphia and Denver worth a couple of dollars, those minted in the San Francisco mint are scarce and particularly valuable. Even pieces in good condition cost at least $200, while excellently-preserved ones and proofs reach approximately $2,000 at auctions. 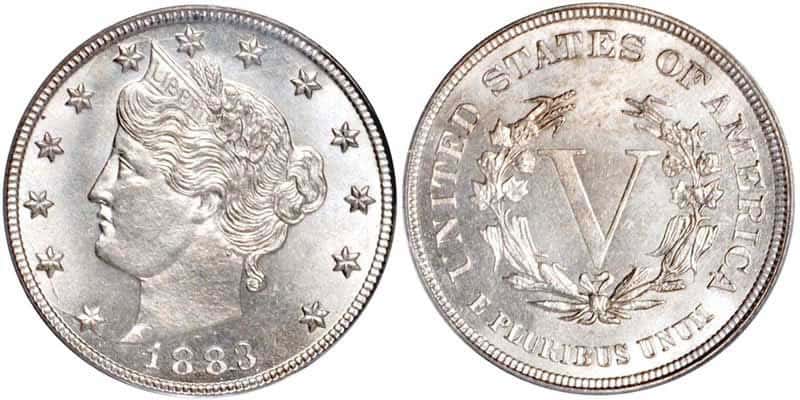 One variation from the first minting year is also included on this list. On average, you should pay $20 to $300 for such a specimen minted in 1883.

Remember that only pieces with the denomination struck on the reverse can reach this price. Those without CENTS on the reverse cost $10 to $55, but proofs are often more expensive than similar coins from the first variation.

Since the US Mint minted these coins three decades, you can expect to find some errors among pieces from the regular strike. Besides specific varieties from the first minting year, you can recognize a few errors. Let’s see.

The V nickels mostly stayed the same during their production from 1883 to 1913, but collectors appreciate one notable exception from the first minting year. In 1883, the US Mint came up with two variations:

The variation with CENTS from the regular strike is worth much more than the one without CENTS. When it comes to proofs, the situation is a little different. Their prices are very similar, regardless of the coin type.

Wrong planchet – This coin was a result of striking on the wrong planchet intended for American and foreign coinage. Therefore, you can sometimes see strange pieces with the wrong denomination.

Clipped planchet – Once the planchets became incomplete due to an accident, the result was nickels with curved, straight, elliptical, or ragged surfaces.

Off-center – These misstruck nickels occurred when the planchet failed to enter the coinage press correctly. In this case, the percentage of deviation is crucial, and the most expensive coins are those with a minimum of 40% to 50% off-strike.

The only condition to get more money for such a piece is to have the coin with a recognizable date.

Broad strike – Some coins were mistakenly struck outside the collar die, resulting in specimens spread out more than regular ones.

Brockage – This relatively rare error occurred when already struck nickel remained on the die. In this case, it impressed its design on the following blank planchet and left a mirror or negative imprint.

Lamination – This error was a result of a non-belonging foreign body, like dirt or gases, being trapped in the strip. You could recognize two lamination flaws, those with attached or missing particles on the surface.

Indent – It occurred when two blanks were minted in the same collar, partially overlaying one over the other. In this case, the upper blank was incused into the lower one after the die struck, making a depression on its surface.

Rotated reverse – Such a coin appeared in two possible ways. The first possibility occurred when the mint employee incorrectly installed the die, causing the obverse and the reverse to be misaligned. Another option resulted from the loosened die, causing it to move whenever striking a new coin.

Multiple strikes – This rare error appeared when the same coin went back into the press by mistake and was struck with the same dies once more.

Struck fragments – After the blanking press punched blank metal pieces, small scraps went to melting and recycling. Occasionally, one or more pieces were mixed with the planchets, and the die struck them. These coin fragments are rare, and only one such Liberty Head nickel exists nowadays.

What makes a V nickel rare?

Even though most V nickels were minted from 1883 to 1912, it is known that at least five specimens were somehow struck in 1913.

The mystery of their minting and the low number of existing coins make them the rarest and the most collectible in the series. The price of $4,560,000 that was paid for one tells more than any explanation.

Which V nickel is worth a lot of money?

What is the most pricey V nickel?