Susan B. Anthony has gone down in history as one of the most important figures in the American women’s suffrage movement. So perhaps it’s not surprising that coins bearing her image can be highly desirable to collectors.

We’ve gone on the hunt for the most valuable Susan B. Anthony coin to have been sold in recent years. And we’re going to look at some of the other examples that have fetched high prices too.

So if you’re ready, step this way to find out more …

Most Valuable Susan B. Anthony Coin 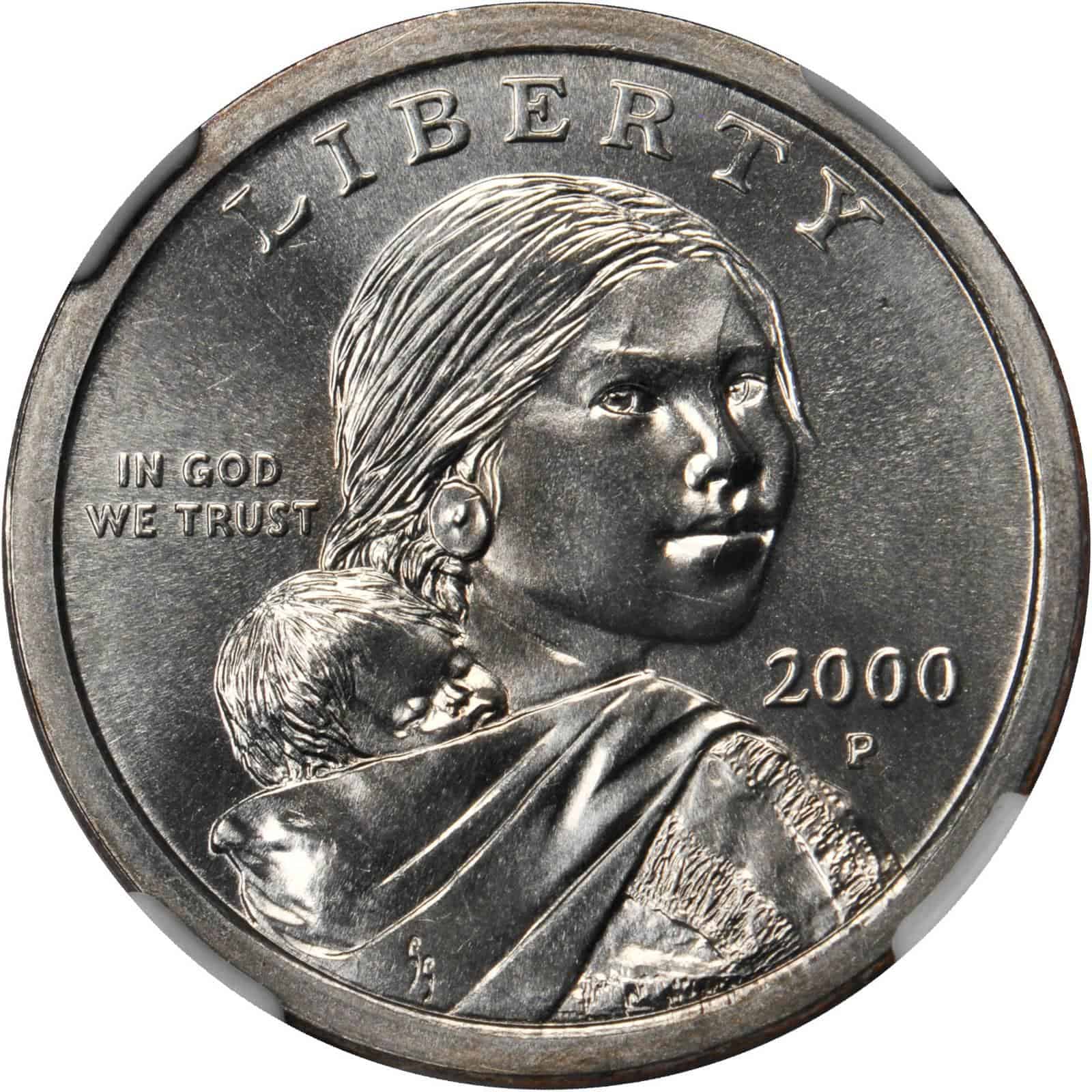 This coin from the year 2000 brings together two iconic women: Susan B. Anthony and Sacagawea. But it was actually produced in error. It was struck with the dies for the Sacagawea dollar, but used the planchet – the metal disc – intended for a Susan B. Anthony dollar.

The disc was made of three quarters copper and one quarter nickel, bonded to an inner layer of pure copper. The Susan B. Anthony dollars were originally made for three years, beginning in 1979. But then in 1999 a fresh batch was produced to increase the quantity available for vending machines.

This particular example would have been one of the 1999 planchets. It was no doubt left in a machine that had been used for the 1999 Susan B. Anthony dollars, and was then used for the Sacagawea dollar.

Error coins are rare, and that makes them very desirable to collectors. There are estimated to be only between nine and twelve examples of this particular error.

This individual coin was presented for auction by coin specialists Stack’s Bowers in 2012. It fetched the impressive price of $16,450. 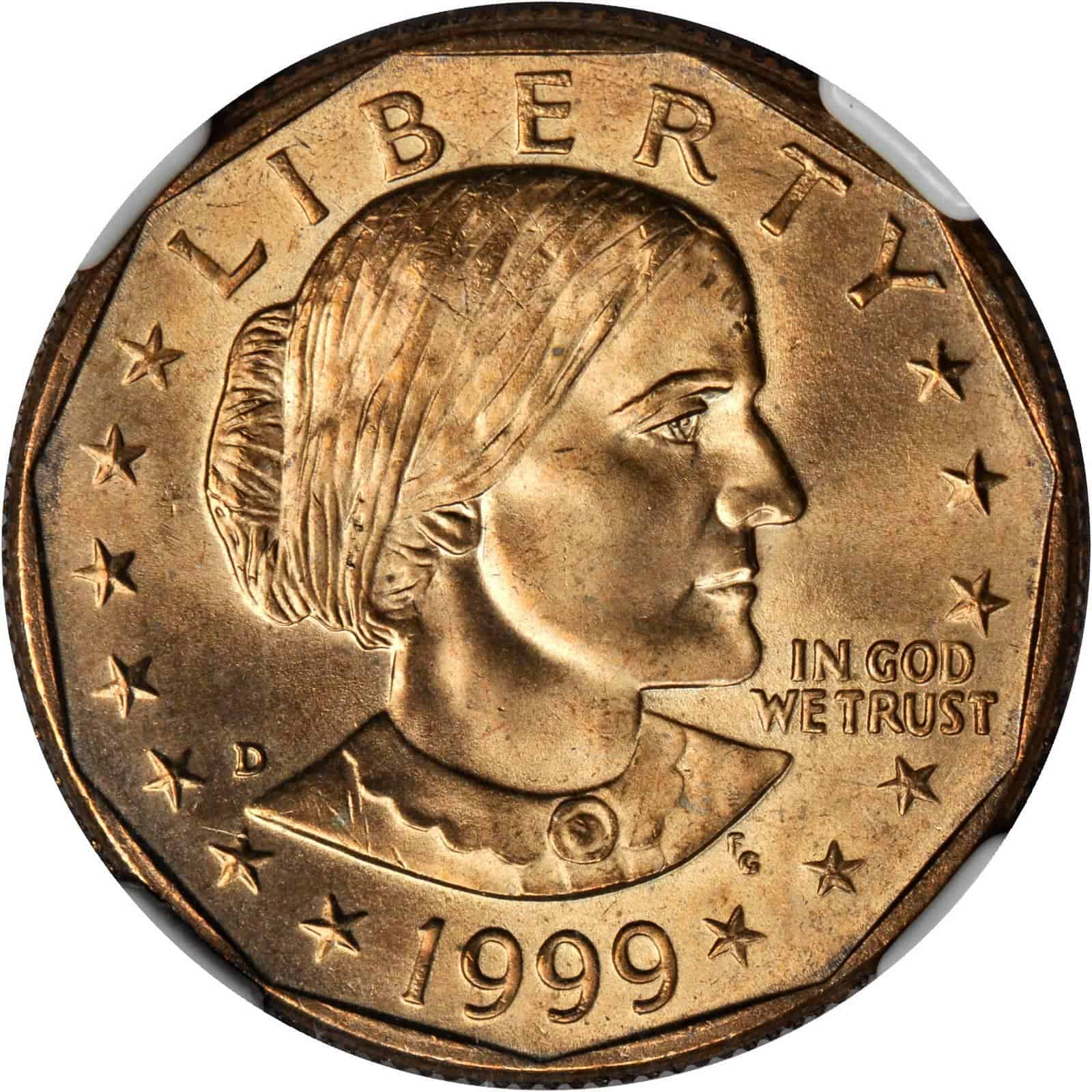 The dollar is dated 1999, when the Sacagawea dollars were also being minted. This one was created in the mint at Denver.

It’s a high quality example of an error coin, graded MS – mint state – 65 by the Numismatic Guaranty Company, or NGC. The NGC is an independent coin assessor, and its mark of 65 reflects the coin’s quality and condition.

The highest possible mark is 70, and coins graded 65 and above are known as “gem quality”. This one is beautifully struck, with plenty of what coin collectors term “eye appeal”. 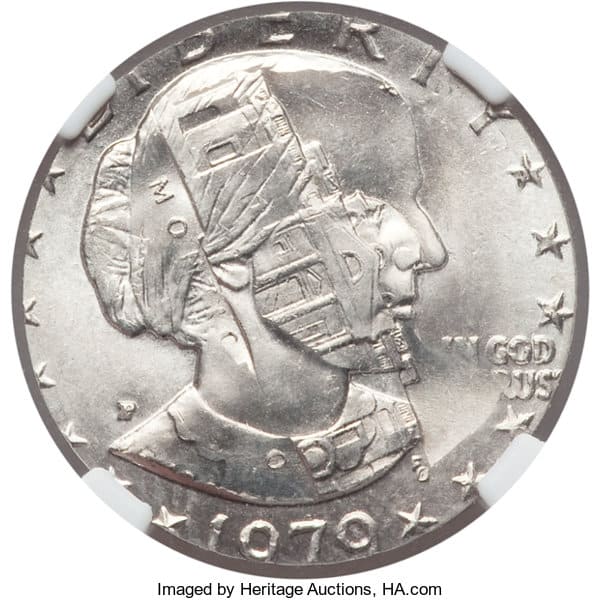 Here’s another interesting example of an error coin.

It’s a Susan B. Anthony dollar that was struck in 1979, the very first year these coins were produced. The coins of that year were minted in great numbers in all three mints that were then active – Denver, San Francisco and Philadelphia.

This one was created in Philadelphia, which is what the “P” in its designation of 1979-P stands for. And again, it’s the  Susan B. Anthony dollar which was struck on top of another coin. That other coin was a 1978 Jefferson nickel.

The result is a coin showing Monticello running lengthways at a slight angle down Susan B. Anthony’s face. Monticello, meaning “little mountain”, was Jefferson’s home from 1770 until his death in 1826. On this coin, the central dome of the house appears near Anthony’s nose. 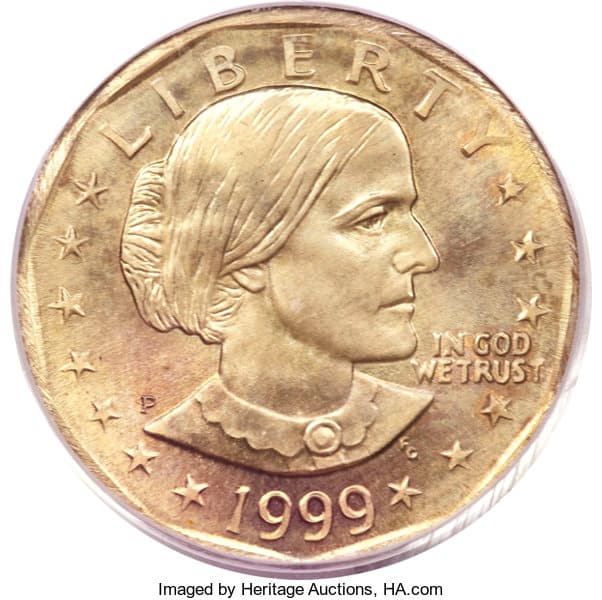 Here’s another example of a Susan B. Anthony dollar that’s quite different from standard coins. But in this case it’s the result of an experiment, rather than an error.

In 1999 the Mint was searching for a new alloy for its coins. It wanted it to have a gold appearance, but the same electromagnetic signature as the planchet used for the existing Anthony dollars.

The alloy used for this coin was one of the samples produced during the course of this quest. This one has a lovely sea green shade, with dashes of gold and rose toning.

The experiment wasn’t entirely successful, though. The striking wasn’t very crisp, as can be seen in the letters of “LIBERTY” and the upper portion of Anthony’s hair..

Unsuccessful experiments like this one should have been melted down, but somehow this coin survived. It is one of only two such specimens known to exist. The other is slightly higher quality, graded MS67 against this one’s grade of MS66. 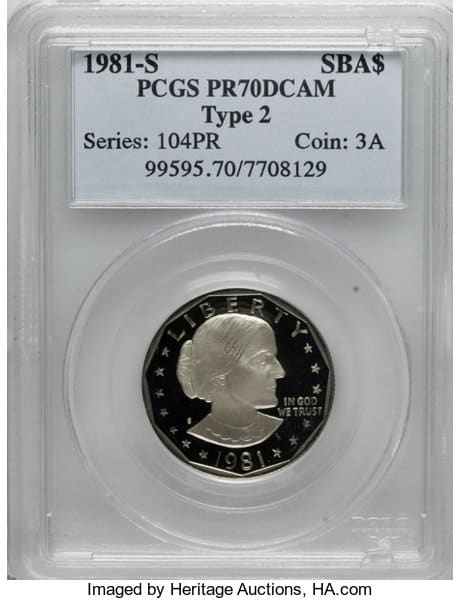 Here we have a coin which is, to all intents and purposes, perfect. It’s a proof coin. That means it was never intended for circulation and was struck to exacting quality standards. Proofs were produced for the Mint’s archives or, in more recent times, for collectors.

The coin was minted in San Francisco in 1981. There are two types from this mint and year. They’re distinguished by the different appearances of the mint mark of “S” for San Francisco. In Type 1 coins the S is clear and upright. In the rarer Type 2 coins, the S is on a slant. This example is a Type 2.

It was graded the highest possible mark of PR70 by the Professional Coin Grading Service, or PCGS. It also achieved the “deep cameo” designation. This is used for coins with a beautiful contrast between glossy fields (i.e. the flat areas) and the “frosted” raised parts of the design.

But a perfect grading of this coin isn’t as rare as you might expect. In fact, all the proofs of Susan B. Anthony coins are deep cameos. (The only exceptions are those coins graded before the term was invented.) And there are no fewer than 39 1981 coins graded PR70. 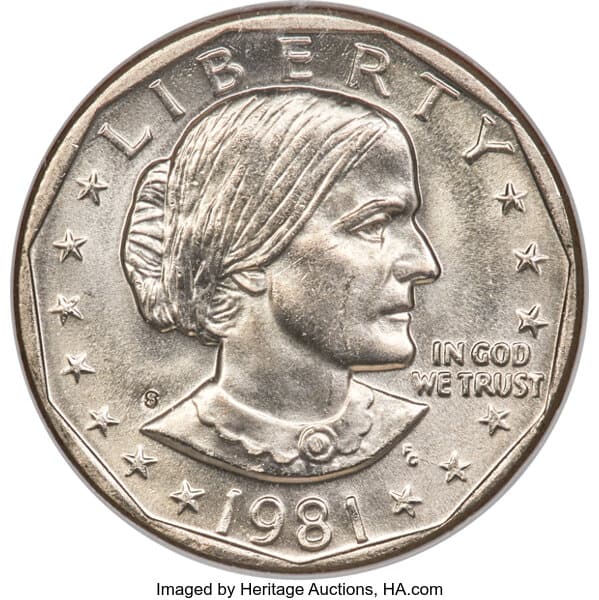 Here’s another example of a Susan B. Anthony dollar from 1981. It too was minted in San Francisco. But in this case, it’s a mint state coin, rather than a proof.

Unlike proof coins, mint state specimens were struck using the same processes as coins intended for circulation. But they never were circulated, meaning they’ve escaped wear and tear from use and handling.

While 1981 Susan B. Anthony dollars aren’t rare, versions rated this highly are considerably less common. Only seven coins are known to exist at mint state 67. And there are no known finer examples.

This one was offered for sale by coin specialists Heritage Auctions in February 2022. It sold for $5,040. 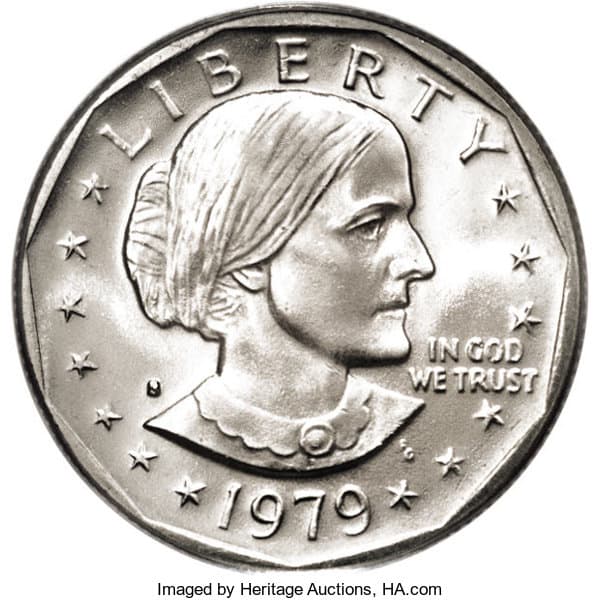 Like the 1981 Susan B. Anthony dollars, those minted in 1979 in San Francisco fall into two types. And again, it’s the mint mark that tells them apart.

With Type 1 coins, like this one, the S has a “blobby” appearance. It looks more like a rectangle with a diagonal line through the middle. The Type 2 coins have a much clearer S. It’s estimated that between 80 and 85 per cent of the 1979 dollar coins are Type 1.

This particular 1979 Type 1 coin was graded mint state 68 by the PCGS. That puts it in first place for the finest graded example, tied with two other coins at the same level. 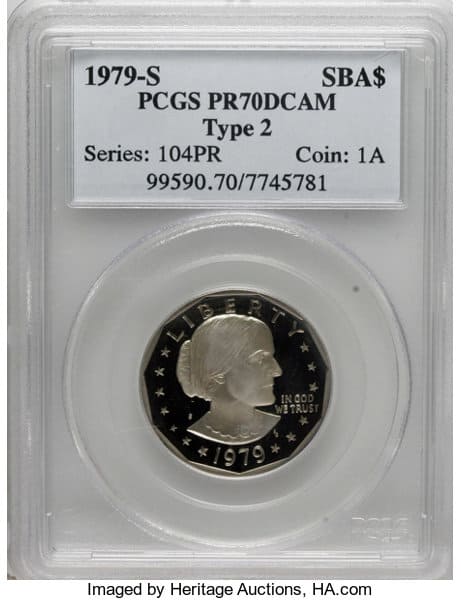 It’s a proof coin, struck to an exceptionally high standard. And it also has the “deep cameo” designation, reflecting the attractive contrast between its reflective fields and frosted design.

It scored a perfect 70 points out of 70 when it was assessed by the PCGS. But as a relatively modern coin, that wasn’t particularly rare. Another 54 coins from the same year and mint also share this perfect score.

The availability of those other examples kept the price relatively low. When this one came to auction in June 2007, it sold for $1,995, including the buyer’s premium. 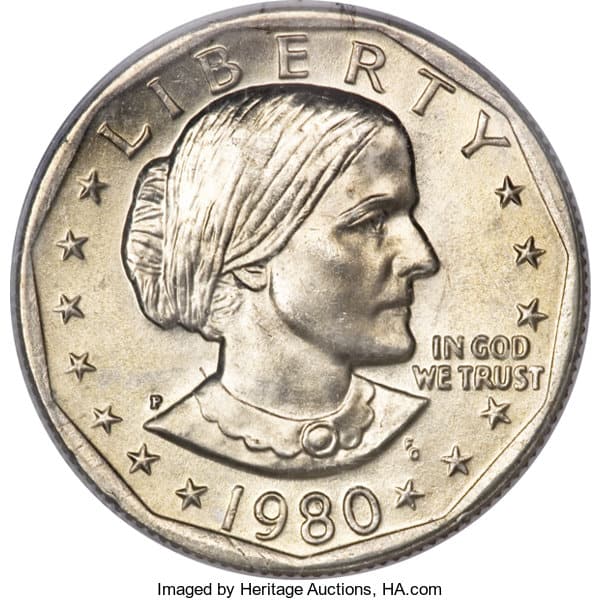 This Susan B. Anthony dollar was minted in 1980, and bears the mint mark P for Philadelphia. 1980 was the second year of the dollar’s production, and mintages were markedly lower than in 1979. That makes these examples somewhat rarer.

The reason for the lower mintages was that it was already becoming clear that the coin wasn’t popular. Its diameter was very similar to the quarter, so the two were often confused. And paper dollars were more familiar to the public.

Even so, there are still plentiful 1980 dollar coins to be found at lower grades. But this one, graded mint state 68 by the PCGS, is a far rarer find. It’s one of only two known to exist. And there are none that have been graded finer.

It was sold at auction in April 2008. The winning bidder paid $4,600, including the buyer’s premium, to add it to their collection. 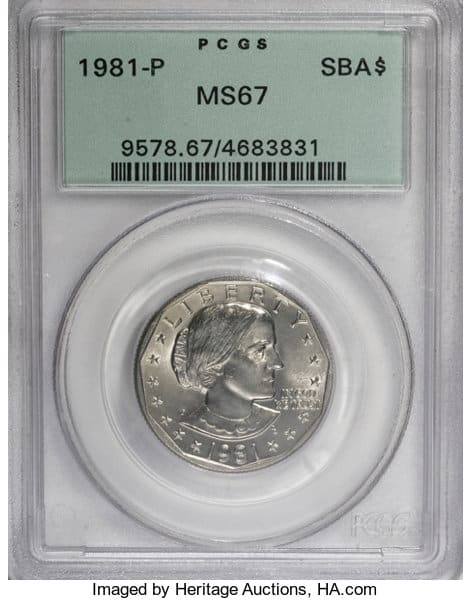 This is another coin struck in 1981, the last year of the initial run of Susan B. Anthony dollars. This one was minted in Philadelphia, and the mint mark “P” is visible just above Anthony’s shoulder.

About 3 million of these coins were minted, so they’re not rare. But finding one in excellent condition is a much taller order. This one was graded mint state 67 by the PCGS.

That placed it in the top spot for Philadelphia specimens from that year. But it’s not alone. The PCGS have graded 16 coins at this level. And the NGC have awarded the same rating to no fewer than 50 coins.

So while it’s still an interesting and uncommon coin, it’s not unique. And that helps keep its value to collectors at a relatively modest level. 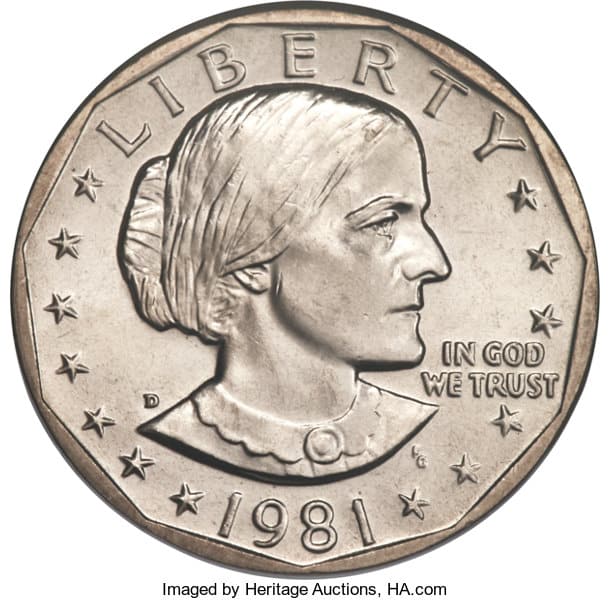 In 1981, the Denver mint issued no fewer than 3.2 million Susan B. Anthony dollars. And they were all presented in Mint sets, likely to be snapped up by collectors.

So it’s something of a surprise that high quality examples are in relatively short supply today. This specimen, graded mint state 68 by the NGC, is the only one of this standard. And just as surprisingly, there’s not a single known coin of better quality.

The allure of owning the best known example of a particular coin is always an added draw for collectors. This coin was offered for sale at auction in January 2017. Including the buyer’s premium, it sold for $2,938. 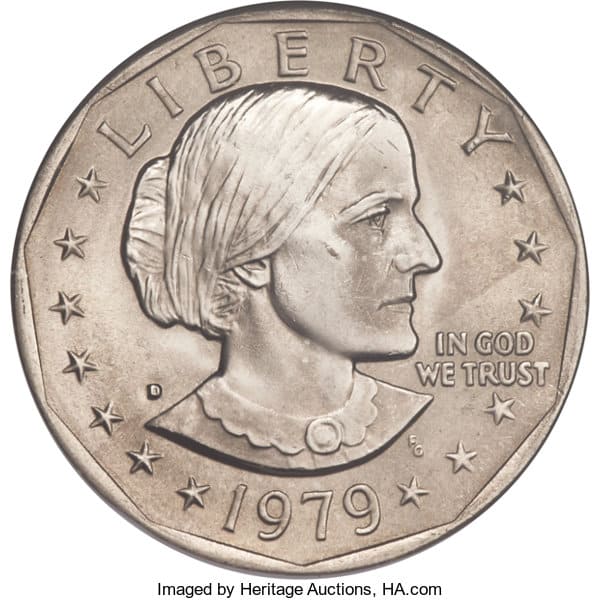 The 1979 Denver version of the Susan B. Anthony dollar was again produced in large quantities. 288 million coins came out of the mint that year.

But just as with this 1981 version, only one coin has achieved a rating of mint state 68 – this one. And again, no finer examples are known to exist.

This coin came up for sale in 2017, and it was the first time it was believed to have crossed the auctioneer’s block. It sold for $1,528, including the buyer’s premium.

That brings us to the end of our look at the most valuable Susan B. Anthony coins sold in recent years.

As the first time a real woman – as opposed to Lady Liberty – had graced US coinage, these dollar coins represent a numismatic landmark. We hope you’ve enjoyed learning more about this historic series.

Why would the rim on a 1979 d mint Susan b Anthony dollar be a blueish black color instead of bronze colored. Or whatever color it's called. I have one outta of several is gotten on trade and can't find out as to why the rim is a different color than others. Thank you. Glenn