The coins of the Philippines provide a fascinating insight into the islands’ journey from Hispanic and American colony to independent nation.

But what are the most valuable Philippine coins? How can you spot them? And just how much might they be worth?

Join us, as we search out the most collectable specimens to have come to the market in recent years. 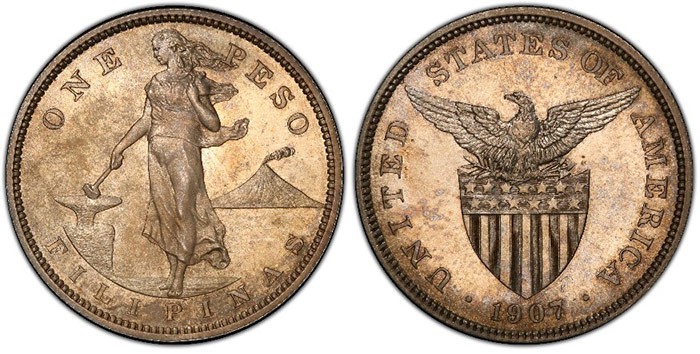 This proof coin is the only one of its kind, making it highly desirable to collectors. Proofs are coins that were never intended for circulation as currency.

In more recent years, they have been struck in relatively high quantities for collectors. But the process for making a proof is time consuming and expensive. So in 1907, they were made in far smaller numbers, usually to be kept in currency archives.

This proof coin was produced in the USA, one of a series of bi-national coins produced from 1903 to 1908. The coins were marked Philippines on the obverse and USA on the reverse.

The whole series were beautifully detailed, showing Lady Liberty on one side and an Eagle on a shield on the other. Very few of the proofs survive. From 1907, there are only two. And because each one was struck on a planchet with a different diameter and fineness, both are unique.

The largest of the two now resides in Manila’s Museum of Money. This one sold privately in 2018 for just under $1 million. 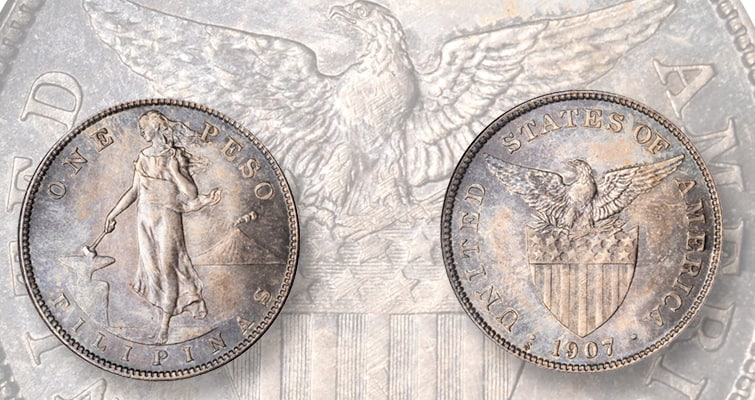 Proofs may be the cream of the crop when it comes to attracting high prices. But mint state coins – those produced for circulation but never actually circulated – are also highly collectable.

This version of the 1907 bi-national peso was graded MS66 by the Professional Coin Grading Service, the PCGS. The MS means it’s mint state.

The 66 is a mark for the quality of the strike and the condition of the coin. The highest possible grading is 70, and anything over 65 is known as “gem quality”.

A grading of 66 under the PCGS system means the coin was the product of a good strike. There are only minor marks or hairlines, and these are only in unobtrusive areas of the design.

The San Francisco mint struck no fewer than 10 million US-Philippine pesos in 1907. But coins in high quality mint state are far rarer. There are only four graded MS66, one MS66+. And one MS67. 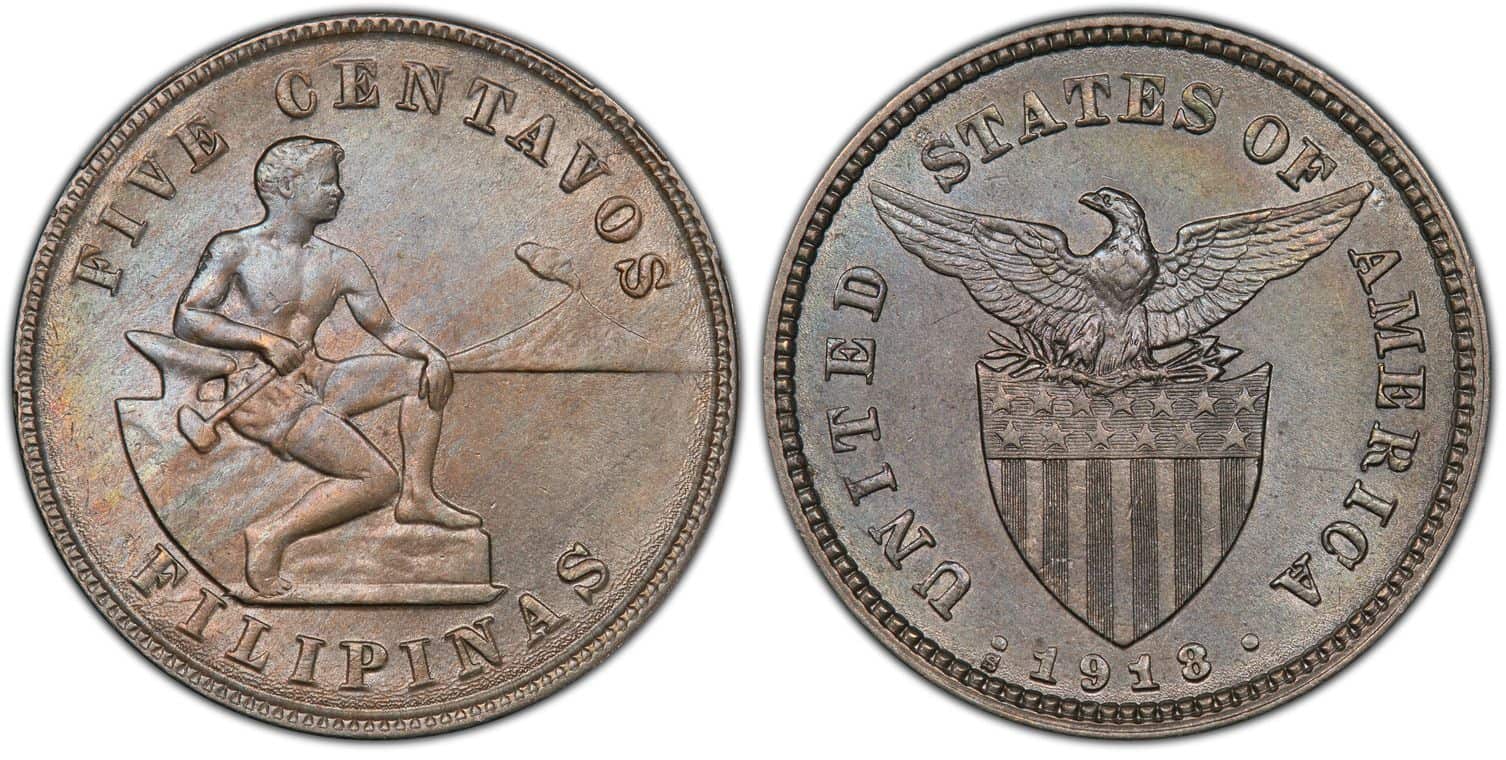 This coin is another made at the San Francisco mint. It dates from 1918 and is an exceptionally fine example of its type. It’s not a proof, but it is mint state, graded 64, and with a very good strike.

But what makes this particularly interesting to collectors is that it’s what’s known as a “mule”. That means it pairs two images not usually seen on the same coin. The obverse carries the image used for the 20 centavo coin, while the reverse has that used for the 5 centavo.

These kinds of errors are very rare. And that makes this a highly collectable coin.

It was in excellent condition too. It bears the image of a seated man on the obverse. The leg in the foreground is raised from the surface of the coin, and as such it’s prone to rubbing. But in this case, there’s barely a mark to be seen.

It was the subject of fierce competition between bidders when it came to auction in April 2014. The winning bidder paid $41,125, including the buyer’s premium, to add it to their collection. 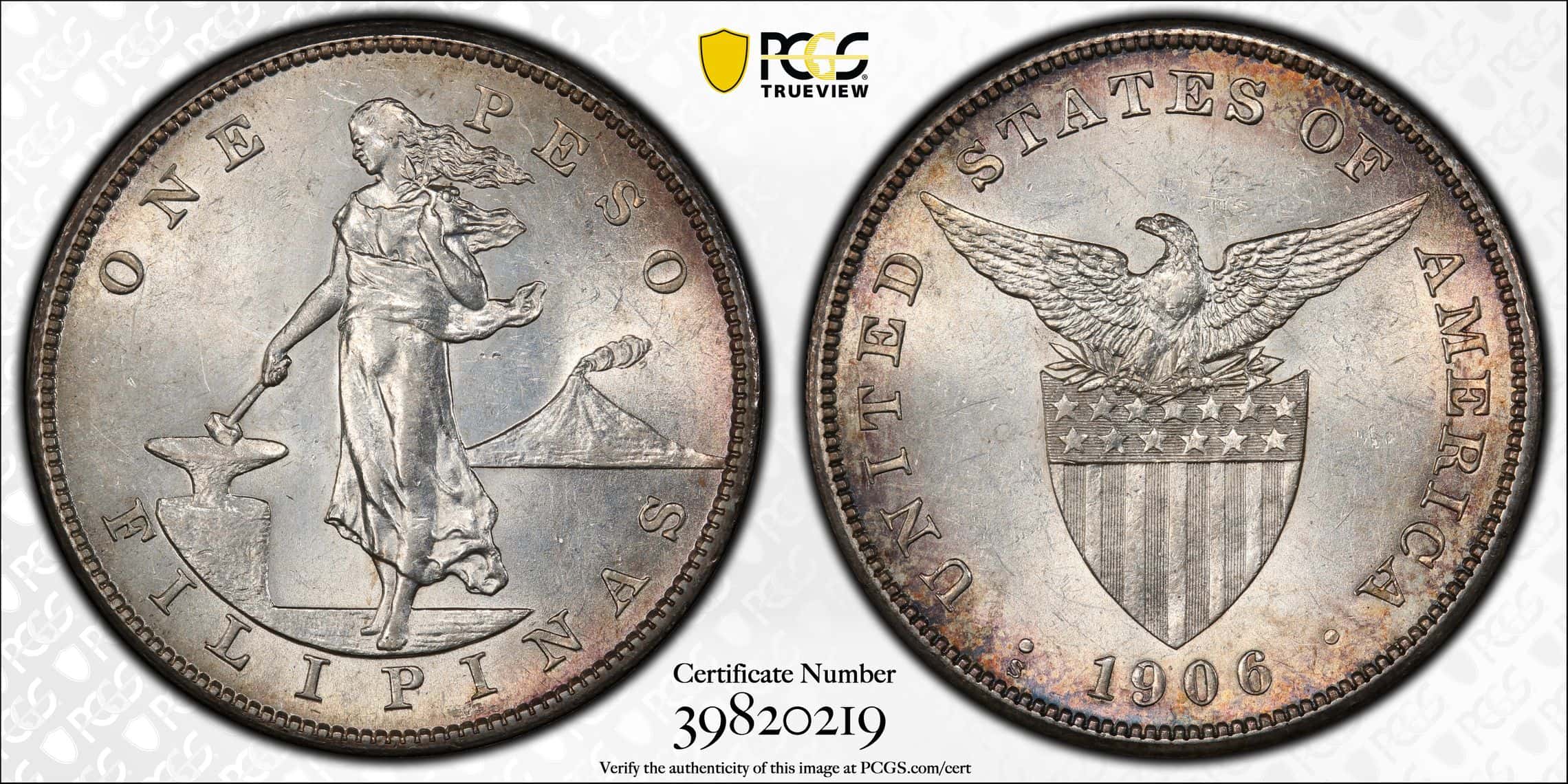 This 1906 peso had an initial mint of over 200,000 coins. But most remained in the vaults of the American Treasury and were subsequently melted down.

That’s because the silver peso and the American silver coin known as the Morgan used about the same quantity of silver. That was despite the Morgan having twice the face value.

In 1907, this changed to make production of the peso less expensive. It became smaller and the quality of the silver reduced from 900 to 800 parts per 1,000. The existing pesos in the Treasury vaults were melted down to make the new, smaller versions.

As a result, 1906 pesos are today very rare. This example was rated AU58 by the PCGS, a good quality rating for a coin that had been circulated. Only eight coins in finer condition are known to exist.

It came to auction at coin specialists Heritage Auctions in 2020 and sold for $43,200, including the buyer’s premium. 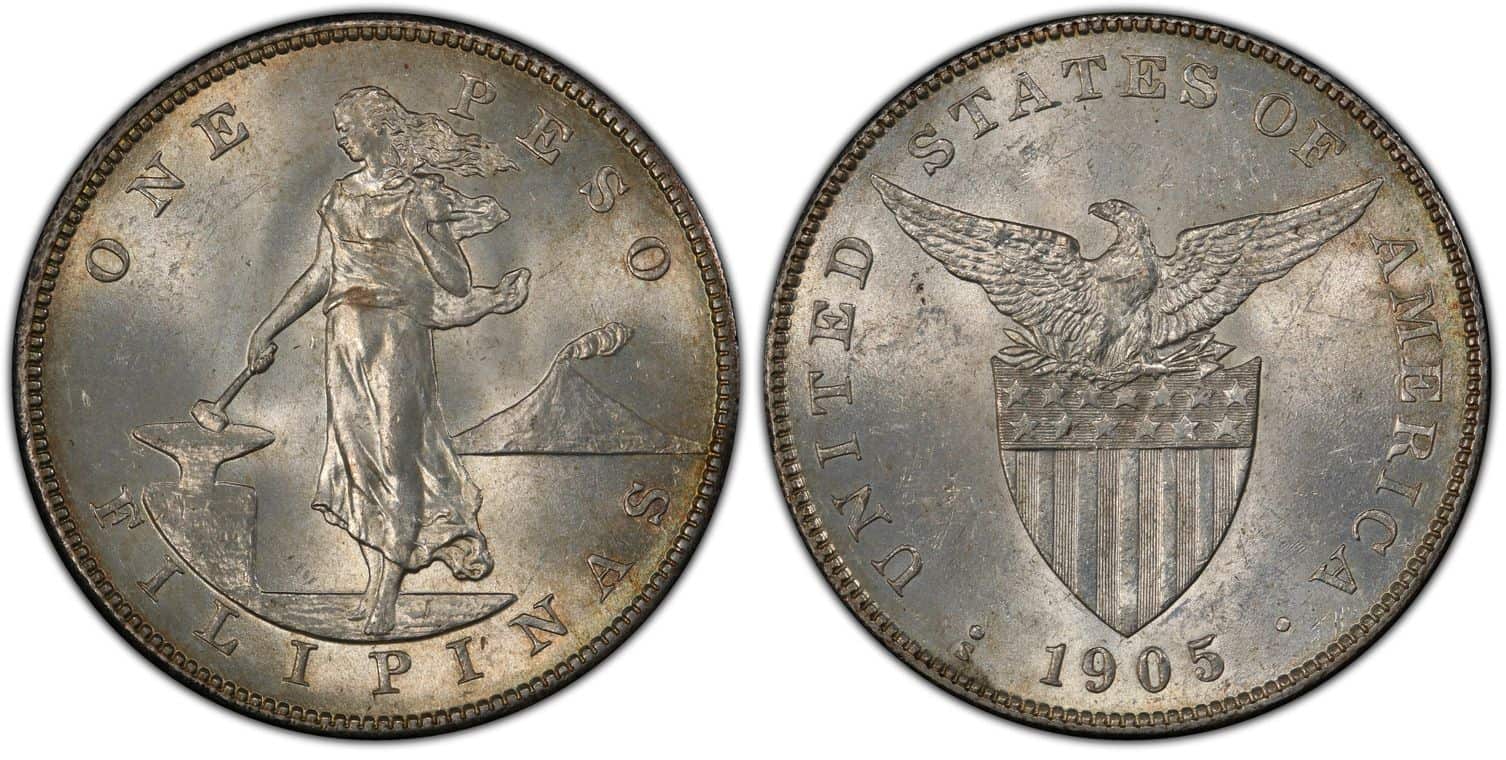 The US-Philippine peso minted at San Francisco in 1905 came in two different varieties. You can tell the difference by looking at the “1” in the date. The rarer variety, known as the Allen-16.06a, has squared off feet and a straight diagonal at the top.

After the Japanese invasion, carrying US-Philippine money was enough to mark out Filipinos as suspected members of the resistance. That was a death sentence. As a result, many buried their money. Even if coins were subsequently retrieved, this treatment meant their quality suffered.

The hot, humid Philippine climate was another enemy to coin quality. It corroded the silver, degrading the quality of the coins.

A mint state coin like this MS64 specimen, then, is a considerable rarity, even with the curved serif “1”. When it came to auction in January 2022, the winning bidder paid $60,000, including the buyer’s premium, to secure it. 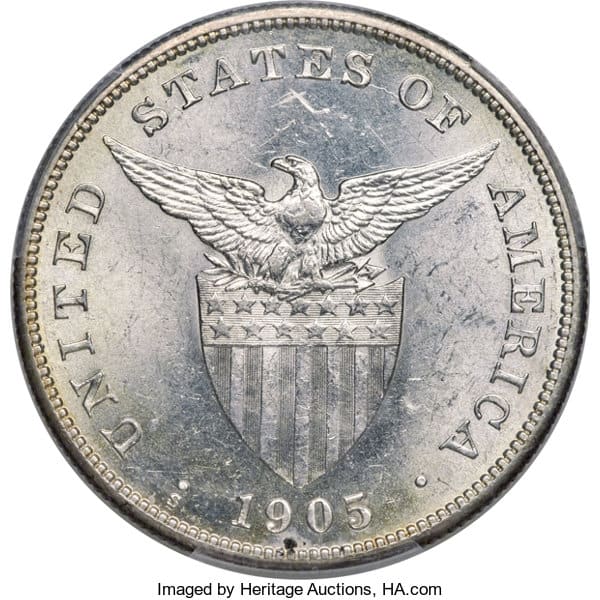 It’s an interesting exercise to compare the sale price achieved by this coin with that of the MS64 curved serif peso.

This is another 1905 peso, but it’s the rarer type, with the straight serif on the figure “1” in the date. But it’s not in quite such good condition, graded a point lower by the PCGS at mint state 63. So does the quality of the coin or the rareness of the type matter more to the price collectors are willing to pay?

When iit comes to quality, one consideration is the grading a coin has received. But another is its relative quality. In other words, collectors will pay a premium for the “best” coin in its class.

This MS63 is one of four graded by the PCGS at this standard. And it’s not quite the finest of the straight serif examples. There’s another graded MS64, although that’s never been offered for sale.

The MS64 curved serif example, in contrast, tied in top spot as the finest quality coin of that type.

When this one came up for sale in April 2020, it sold for $43,200, including the buyer’s premium. Not too shabby. But despite being the rarer type, it was still considerably less than the $60,000 commanded by the MS64 curved serif specimen. 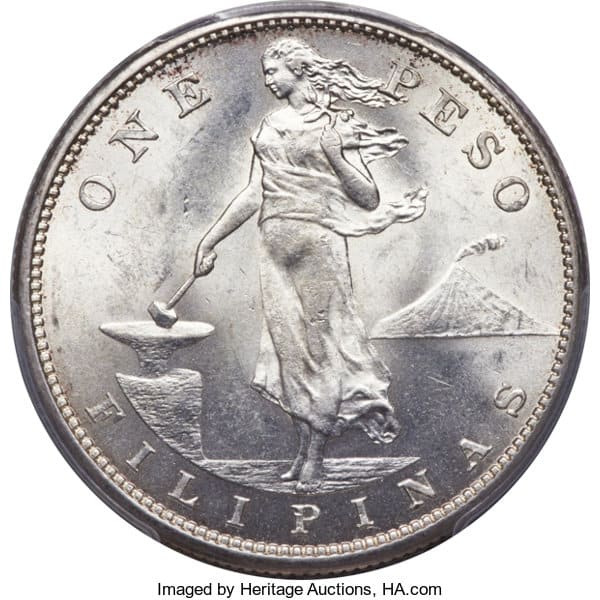 Despite its size having been reduced, the peso was still not a popular coin for commerce. As a result, it was retired after the 1912 issue, not reappearing until 1936.

This 1912 specimen was minted at the San Francisco Mint, and it’s in a condition that’s rarely found. There are only two mint state coins graded 64 known to exist. And there are only four finer specimens on the planet.

This one came up for sale in 2016, another offering from specialist auctioneers Heritage Auctions. It sold for a shade under $40,000, including the buyer’s premium. 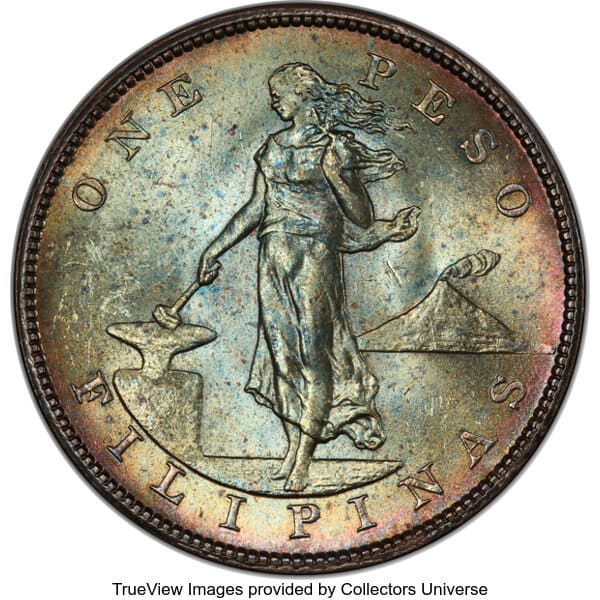 The 1904 peso minted in San Francisco is another that was plentiful at the time, but where survivors are rare. And finding a coin in gem condition is an extremely difficult task.

This specimen is one of only two graded by the PCGS at this level or finer. The other coin is graded MS65+. But it doesn’t feature the same attractive toning of blue, gold and red that graces this coin.

The Numismatic Guaranty Company, the other main independent coin grading agency in the US, has graded another coin MS65 too. But here again, the colorful toning is absent.

That makes this example very desirable. And when it came up for sale at Heritage Auctions in January 2022, it sold for $31,200, including the buyer’s premium. This beautiful gold coin was minted at the Casa de Moneda in Popayán, in Colombia.

It was struck in 1799, when the Philippines was a colony of Spain. One side features a portrait of the Spanish King, Charles IV. On the reverse is the Latin legend “In utroq felix auspice duo”. It means “with happiness under the look of God”.

At over 300 years old and made of 27 grams of fine gold, you’d imagine this would be a very valuable coin. But while it is certainly precious, the price tag when compared to much later US-Philippine pesos is surprisingly modest.

It was offered for sale at an online auction by the Philippine auction house León Gallery in 2021. It formed part of a lot with two other 8-escudo coins. Let’s take a look at those before revealing the combined sale price. The second coin in the lot was another 8-escudo piece, this one dating from 1809. It too carried the portrait of Charles IV, together with the name of his successor, Ferdinand VII.

It was another gold coin, made with gold of a purity of 875 parts per 1,000 – i.e. 21-carat gold. And like the early 8-escudo piece, it weighed 27 grams. And it was another coin minted in the Colombian city of Popayán. The third and final coin in the León Gallery lot was a later 8-escudo piece. This one bears the date of 1818, and it was minted in another Colombian city, Bogotá.

One side again bears the portrait of Charles IV. His successor, Ferdinand VII, had been on the throne for five years by the time it was minted. But he still had to be content with only his name appearing on the coin.

So what price did the three coins achieve when they came under the hammer?

All three were sold for 619,040 Philippine pesos. That’s the equivalent of around $11,000. Compared to the US-Philippine pesos, these beautiful gold coins feel like an absolute bargain. 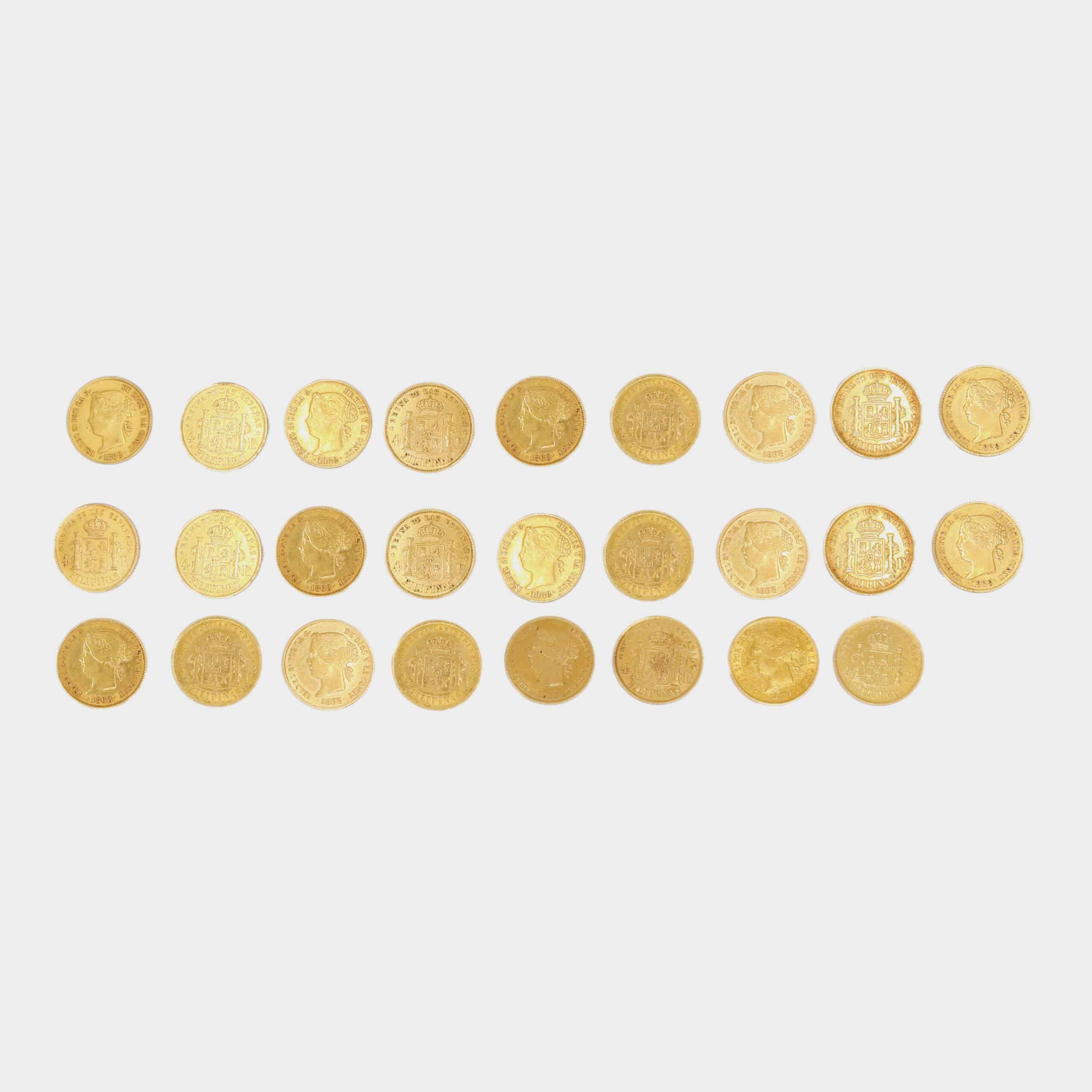 Another lot of 26 coins came under the hammer at the León Gallery auction that same day in 2021. Each of the coins was made of 21-carat gold and weighed 6.8 grams. That gave the lot a combined weight of 176.8 grams.

They had a face value of 4 pesos and were known as Isabelinas. The name came from Isabel II, the Spanish monarch who appears on them. Isabel’s portrait is accompanied by the words “Isabel 2a. Por la g. de dios y la const.” It means “Isabel II. For the glory of God and the constitution”.

The coins were minted in 1868 at the Casa de Moneda de Manila. The mint had opened in 1861, and its coins were historic for two reasons.

The winning bidder snapped up the lot for a surprisingly reasonable 1,109,600 Philippine pesos. That’s the equivalent of about $19,500.

That brings us to the end of our look at some of the most valuable Philippine coins to have been traded in recent years.

As our review shows, it’s not necessarily the coins made of precious metals that command the highest prices.

But all these coins have one thing in common. They shine a light on the fascinating history of the Philippines, and its journey to independence. We hope you’ve enjoyed learning more about them.