The history of Mexican coinage begins in 1535, with the creation of the country’s first mint. It was built on the site of the Casa Dengrida, the place with the Emperor Moctezuma once meditated.  And it was the first mint in the whole of the Americas.

That long history has resulted in some very collectable coins. But how do you spot something that might be valuable? And just how much might it be worth?

That’s what we’re here to find out! We’re going to look at some of the most valuable Mexican coins, and what makes them so desirable to collectors. 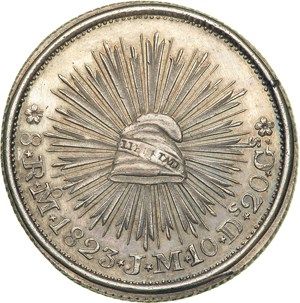 This lovely coin was minted in Mexico City in 1823. It has a face value of 8 reales. Reales were a Spanish unit of currency in use from the 14th to the 19th centuries. The word means “royal”, and the 8-reales was the most common denomination for coins. It’s the equivalent of one Spanish dollar.

This coin bears the image of a Liberty cap with the sun’s rays behind it. On the other side there’s an eagle with a hooked neck holding a snake in its beak.

This one is particularly special because it’s a proof coin. Proofs were made to a higher standard and were never intended for circulation, meaning they are often still in excellent condition.

The coin was graded PR63 by the independent coin assessors the Numismatic Guaranty Company, or NGC. The mark is out of 70, and reflects the presence of slight hairlines caused by early cleaning. Excitingly for collectors, this coin was thought to be the only one in existence. 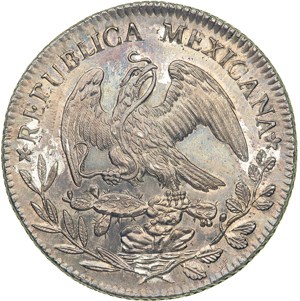 Comparing this coin with the last one tells us something interesting about coin value.

At first glance, the two are very similar. They were both minted in 1823 in Mexico City, and both are the same 8-reales denomination.

But this example looks different. The Liberty cap on the obverse is larger. And rather than disappearing behind it, the sun’s rays stop before reaching it.

On the reverse, the eagle looks different too, with its head raised rather than lowered. This variant design is known as the “upright eagle”.

This is another proof coin, and it’s graded one point higher at PR64. It was one of only two such coins known to exist. And of the two, it was considered by far the best. 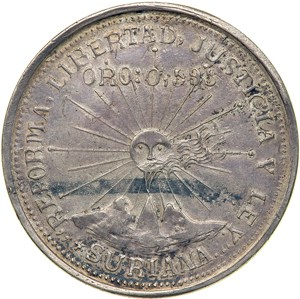 This coin dates from 1915, during the Revolutionary period in Mexico. One side depicts an eagle with a snake in its beak, this time perched on a cactus. The other side shows the sun over a smoking volcano.

The coin has a plain edge, making it a rare type. Only two plain edge coins are known to exist – this one, and another held in the collection of the Banco de Mexico.

It was graded AU55 by the NGC, the “AU” signifying “almost uncirculated”. Coins with this designation will have minor signs of wear on only the highest points of the design.

Both this and the Banco de Mexico specimen are what’s known as “presentation strikes”. In other words, their quality is much better than the norm. And of the two, experts considered this one the superior coin.

This coin is something that for many years was believed not to exist – a peso from 1914 struck on silver. Graded MS62 by the NGC – MS standing for “mint state” – it’s the only specimen ever discovered.

It was made during the Revolutionary period, when Pancho de Villa held power in Chihuahua. It features a Liberty cap on the obverse, and a set of scales and a law book on the reverse.

The quality of the strike is excellent, with clean, lustrous fields. And both sides exhibit attractive, even toning. 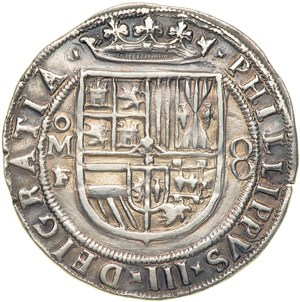 This coin was struck during the reign of Phillip III of Spain, dating it to somewhere between 1598 and 1621.

“Royal” reales, like this one, were a cut above the standard currency. They were struck with special dies on carefully selected, high-quality planchets. And it’s possible some may have even been sent to Spain for the monarch’s approval.

The royal dies did not always have the same designs as standard currency. This coin carries the Hapsburg shield on the obverse, and the arms of Castille and León on the reverse. The design is perfectly centered, with all the details crisp and clear. 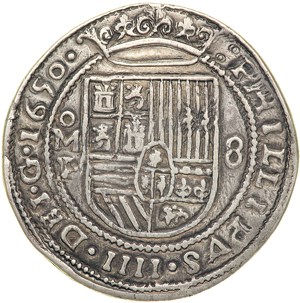 “Royal” 8-reales coins from 1650 are the rarest of all the Royals. So this example attracted considerable interest when it was offered for auction in 2008.

Its condition of XF45 was considerably further down the scale than most other high-value coins. The XF stands for “extremely fine” and it’s a designation applied to circulated coins. It means that all the details of the design are “complete” but not “full”. And there will be some wear to the highest points.

But while the condition was well below that of a proof coin, it was still by far and away the finest specimen of the 1650 Royal known to exist. And that meant collectors were prepared to offer a lot of money to secure it. 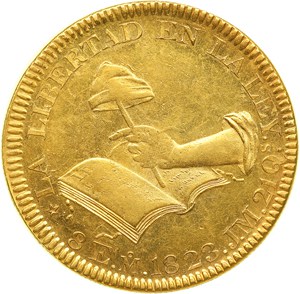 This attractive gold coin dates from 1823, two years after Mexico formally gained independence from Spain. But “independence” still gave Mexico an emperor, and it was not until 1823 that he was persuaded to abdicate.

This was the first gold coin to be minted for the new republic, and it has a face value of 8 escudos. It was minted in Mexico City, and was produced for just one year.

There are two different types. Type I coins are usually better struck, but Type II coins – like this one – are considerably rarer. For every Type II coin in existence, there are about two Type Is.

Finding a good quality Type II specimen is more difficult still. So this one, graded MS62 by the NGC, was a rare find. It was auctioned in 2008 and sold for $48,300. 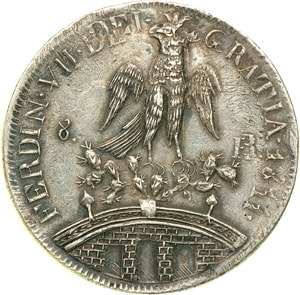 In August 1811, a “Supreme National Junta” was established at Zitacuaro in Michoacán. They minted their own coins. And it was on these coins that the Mexican emblem of an eagle atop a cactus appeared for the first time.

This 8-reales piece shows the design, with the eagle and cactus appearing above a bridge. On the other side there is a hand holding a bow and arrow, with a further arrow, quiver, sling and spear below.

It is a rare specimen, representing an important part of Mexico’s history. And its condition, graded AU55, made it amongst the highest quality examples known to exist. 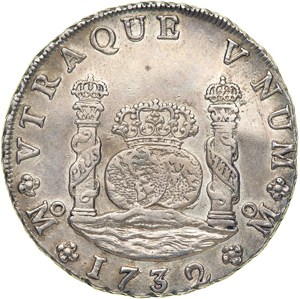 This coin, dating from 1732, is an example of what’s known as “pillar coinage”. The reverse shows a design of two pillars, with snakes coiled around them.

The change in design marks the start of fully mechanised coin production in Spain’s New World mints. Milled coins from the Mexico City Mint are among the earliest examples in existence.

This coin dates from the first year of production. All 1732 pillar coins are rare, but those with higher denominations, like this 8-reales piece, are rarer still.

Fast forward eight years, and another 1732 8-reales coin was presented at auction. This one had all the attributes of the one sold in 2008. But it was considerably higher quality. The “mint state” designation meant that it had never been circulated. And it was graded 63 out of 70.

It wasn’t quite the best example known to exist – the NGC had graded one other specimen higher. But as the second finest coin of its type, it certainly got collectors hot under the collar.

When the auctioneer’s hammer fell, the coin had realised a price of $130,000. 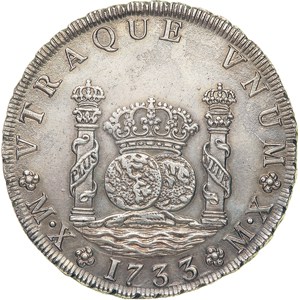 This is another example of pillar coinage, this time dating from the following year. It’s in excellent condition, rated MS63 by the NGC. And it has something else that makes it rare and desirable – an “MX” mint mark.

The mint mark appears as two letters on the reverse of the coin. “MX” signifies Mexico City. But in most cases the Mint used the letters “MO” instead. Only milled silver coins from 1733 bore the “MX” mark. 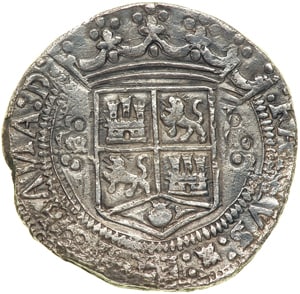 This beautiful gold coin dates from 1714 and is very rare. And rated MS65 by the NGC, it qualifies as “gem quality”.

This is another Royal coin, also known as a presentation strike. It was struck on a planchet carefully selected by hand for its superior quality. And it would have been made with a special die too.

It is possible that the coin was struck in celebration of a special occasion – the marriage of Phillip V, King of Spain, to Elizabeth Farnese took place that year. Specially struck coins may have been amongst the gifts presented to the royal couple by their overseas colonies.

One side of the coin features the crowned royal coat of arms. The value “VIII” for 8 escudos appears in the field. The other side shows a cross and angled sceptres, signifying divine power. 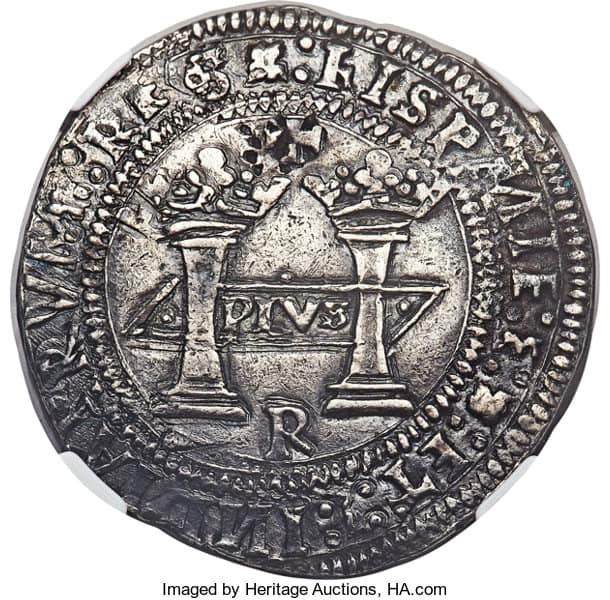 This historic coin is one of the first dollars ever produced in the Americas. It was minted in Mexico City – at this time, the mint mark was “M”, and it appears twice on the reverse. The coin was made just two years after the mint was established.

It also carries the signature of the mint’s first ever assayer, Francisco del Rincón. He worked at the mint from 1536 to 1538.

It’s one of only three such coins known to exist. All were recovered from the shipwreck of the Golden Fleece, a ship that sunk in around 1550.

The coin shows signs of just how difficult production was at that early age. The legends show evidence of double striking and numerous breaks. But it is in excellent condition, with virtually no sign of saltwater damage.

It is, in fact, the finest of the three known coins by a considerable margin. That was reflected in its price when it came to auction in 2016. It sold for an astonishing $528,000.

That brings us to the end of our look at the most valuable Mexican coins to have changed hands in recent years. From the sixteenth century right up to the twentieth, these coins record Mexico’s history as colony, battleground, and republic.

We hope you’ve enjoyed learning more about them, and the amazing prices they can command.

What about the coins during the reign of Maximilian and Carlota in Mexico in 1866+?