Japan’s history and culture stretches back many centuries, and that’s mirrored in its currency. The country’s first coin was struck way back in 621 AD. So it’s perhaps not surprising that there are some highly collectable specimens on the market today.

We’re going to explore the most valuable Japanese coins to have changed hands in recent years. We’ll find out why collectors were so keen to secure them. And we’ll reveal just how much they were willing to pay.

So if you’re ready, let’s get started! 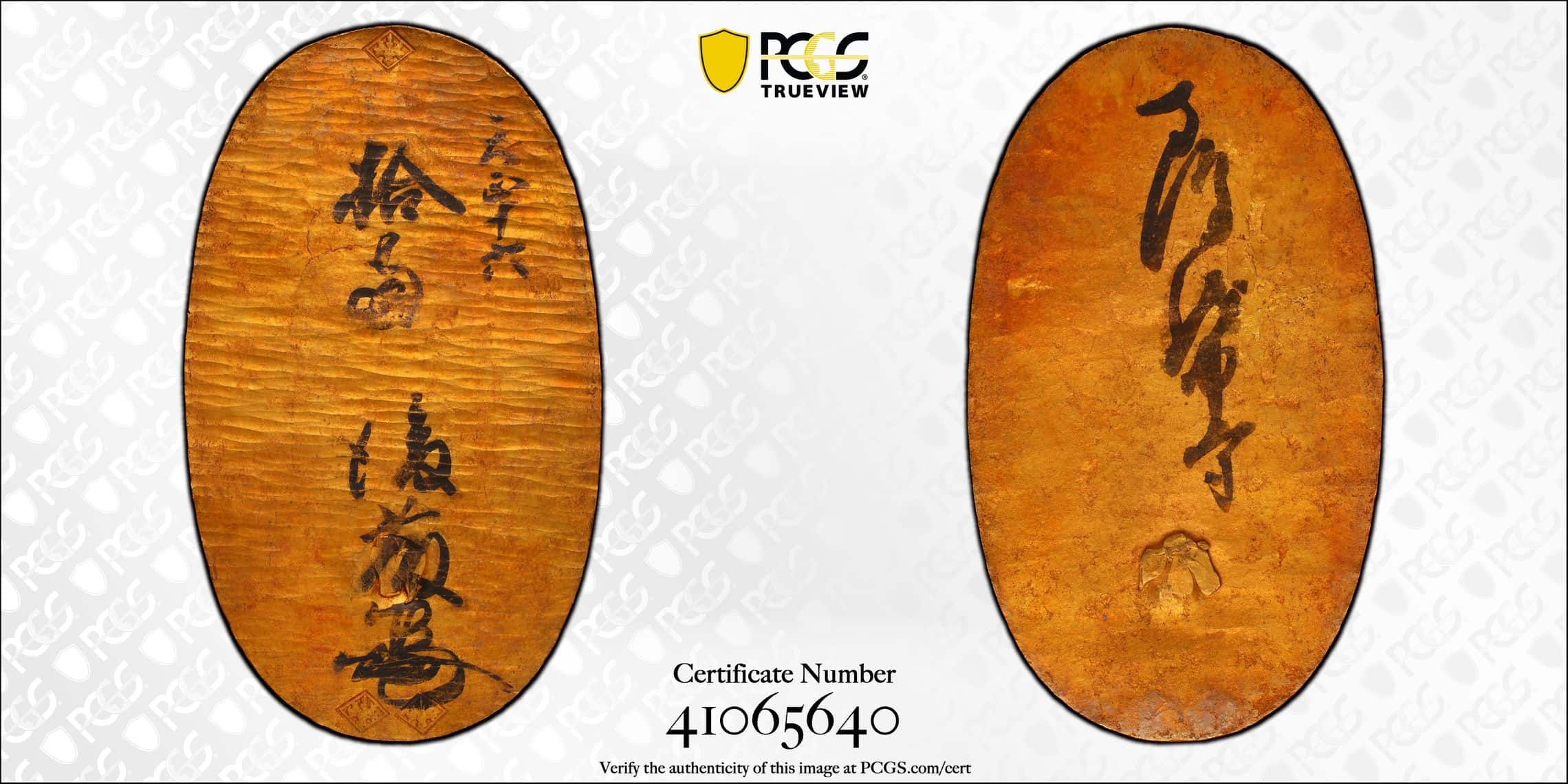 This remarkable coin is one of the first Oban coins ever minted. It dates from the Tensho era, in around 1588. And there are only six known specimens of this type in existence.

Obans were oval gold plates – the word means literally “large stamped piece”. And they were the largest denomination of the currency introduced by the military dictator, or shogun, Tokugawa Ieyasu.

This Oban is set apart from other kinds by the presence of three diamond shaped stamps on the obverse. These are known as “Kiri stamps”.

Both sides are signed in ink. And on the obverse (the front) there are several characters inscribed by hand on the lower left portion. These may be graffiti, or they may have had a more official purpose: two other Obans of this type are known to have similar additions.

It was graded by the independent coin assessors, the PCGS – the Professional Coin Grading Service. They assessed it as MS60, meaning it was in “mint state”, with 60 points out of a possible 70 for its quality and condition. 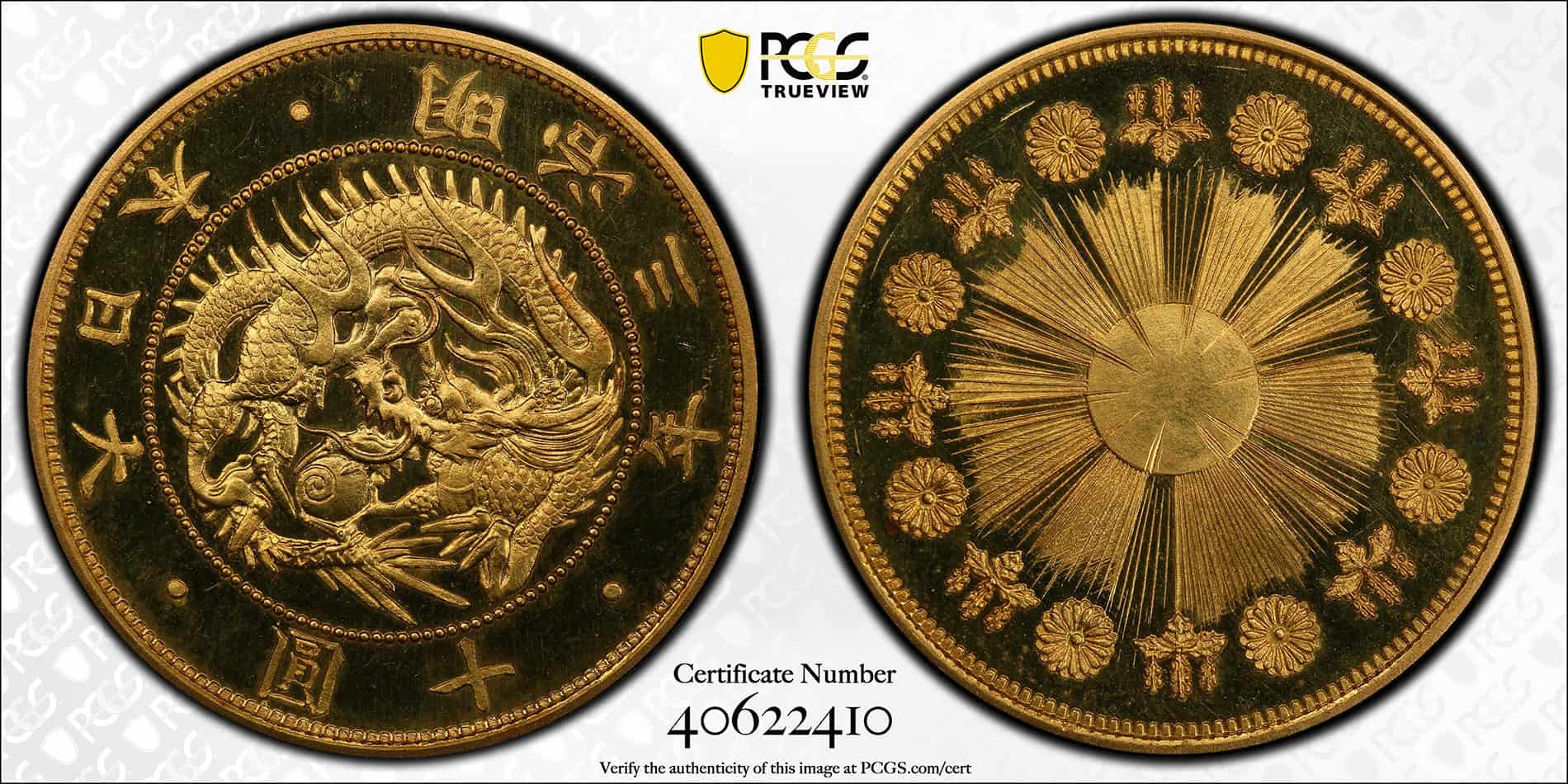 While Japan’s coin making history stretches back over a thousand years, it’s not necessarily the oldest specimens that fetch the biggest prices. This set of eight coins smashed records when it was presented at auction. And it dated from the relatively recent year of 1870.

This was just two years into the restoration of imperialism with the Meiji Dynasty. And the new coins marked a distinct change in approach. Gone were the ingot style coins of the feudal period. In came round coins of a uniform size.

They were minted in London, but the designs were Japanese to the core. They were the work of the artist Tamoo Masuda, calligrapher Hyoka Ishii, and engraver Natsuo Kano. In London, they were translated into dies by  engraver Leonard Charles Wyon.

There are no official records of how many of the coins were minted. But today, only two complete sets are known to exist. One of those is in the collection of the British Museum. The other was offered for sale at auction in Hong Kong in April 2021.

It became the most valuable set of coins ever sold, with the winning bidder paying $1.56 million to secure it. 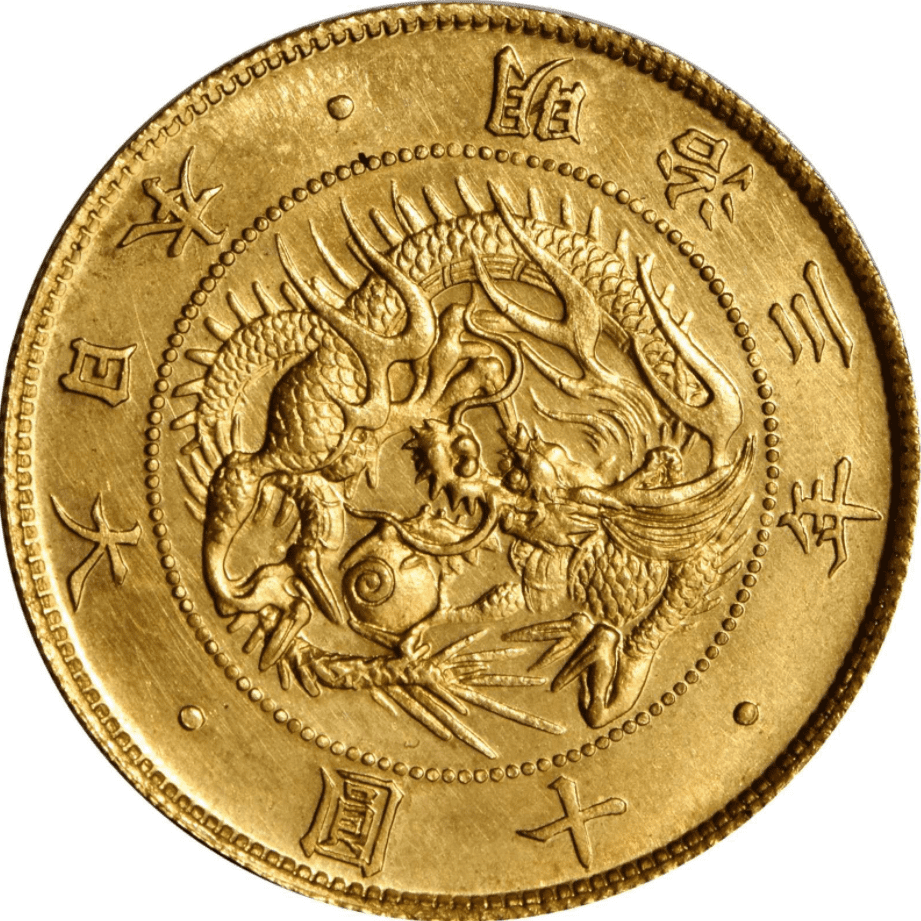 This beautiful gold coin is a very rare pattern for a 10 yen coin. It dates from 1870 and is similar to the coin from the previous year. This one, though, is larger, measuring 32 millimeters in diameter compared to just under 30 millimeters for the 1871 version.

It is beautifully engraved with a dragon on one side, and a sun and wreath on the other. It was graded as a specimen coin by the independent coin assessors the Professional Coin Grading Service, or PCGS. That means it’s not quite the quality of a proof coin, but better than one in mint state.

The grading of 61 points is out of a maximum of 70. The coin shows light signs of handling, and there is one small mark on the rim of the reverse side, around the 1 o’clock position.

It was perhaps those flaws that meant the coin was given a relatively conservative pre-sale estimate of $100,000 to $150,000. But it was a very rare coin, with only five known to exist. And of those, two were in museums, leaving just three for collectors to get their hands on.

It was sold in Hong Kong in April 2021 by coin specialists Stack’s Bowers. The price when the hammer fell was an estimate-busting $660,000. 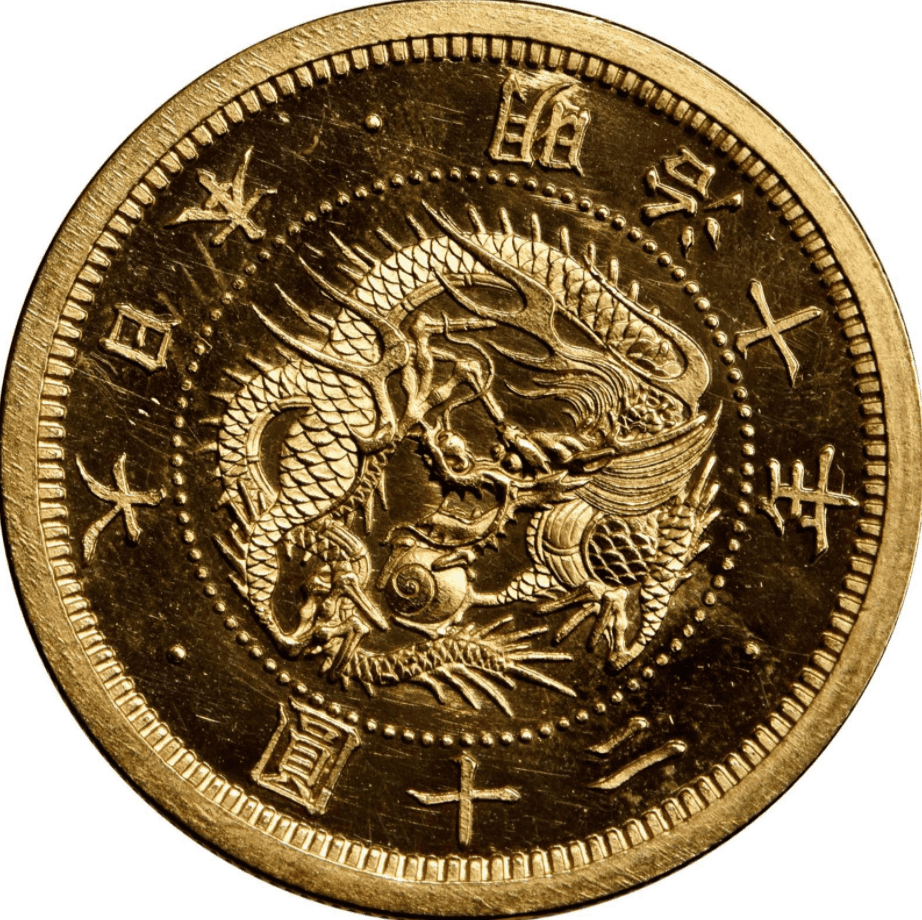 This 20 yen coin dates from 1877, the tenth year of the reign of Emperor Meiji. And despite being nearly 150 years old, it is in excellent condition. It was graded MS (mint state) 64 by the PCGS. And it was highlighted as being almost as fine as a proof coin in its quality.

Very few of these coins were ever made – so few, in fact, that they were probably struck for presentation to high-ranking officials or foreign dignitaries. That is probably also the reason for this coin’s exceptional quality, with its crisp detail, broad edges, and highly reflective fields.

But in the event, the sale left even that upper estimate behind. The winning bidder paid an astonishing $840,000 to add it to their collection. 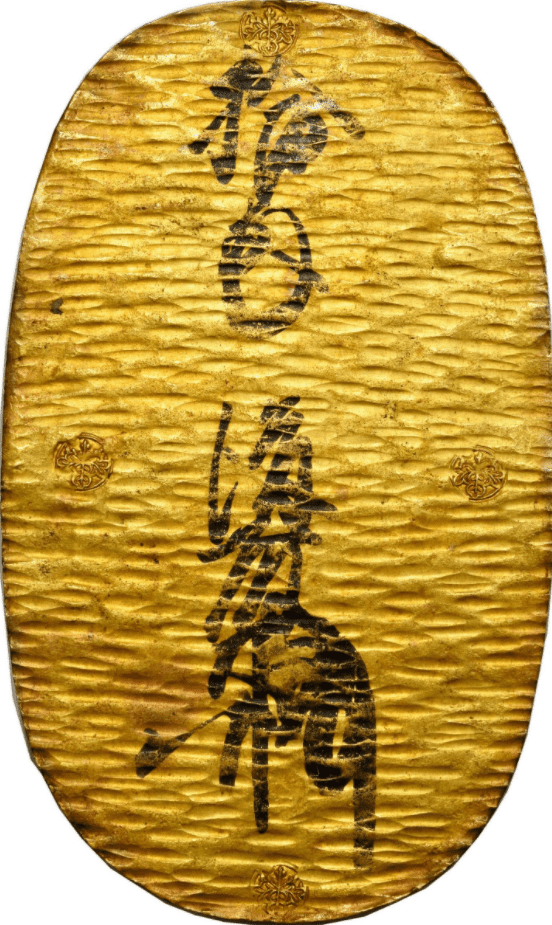 This is another Oban dating from the 16th century, in what’s known as the Tensho era. It’s a rare coin, and it’s particularly rare for it to appear for sale outside Japan. So when this one was offered at a Hong Kong auction in 2021, it got collectors hot under the collar.

The ink signature is complete, with just some fading to the upper section. The Kiri marks are unevenly applied, as would be expected for a piece from this period.

The coin bore some faint scratches in one quarter, and a small punch mark towards one edge. It was graded “AU” by the PCGS, standing for “almost uncirculated”. That’s one level down from “mint state”, and applies to a circulated coin with the most minor signs of wear. 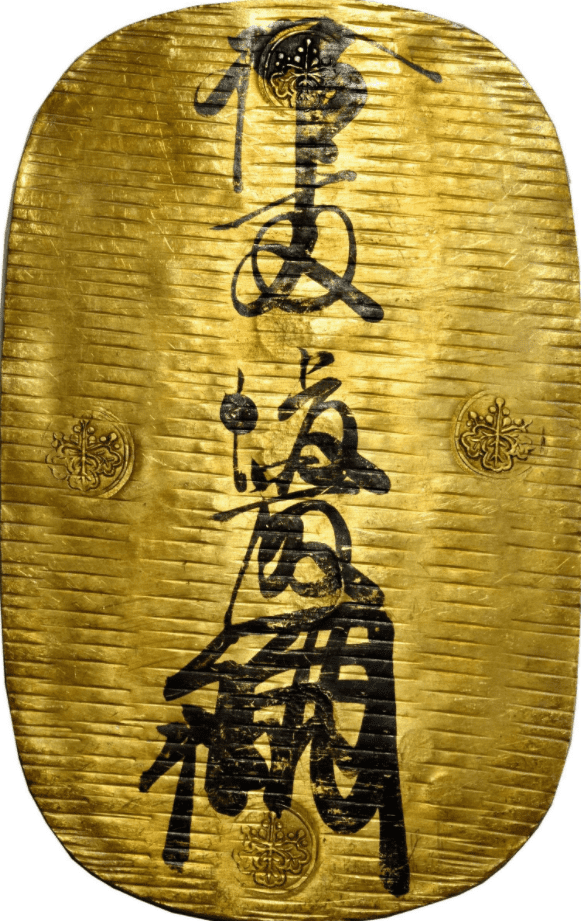 This later gold Oban dates from the Genroku era, between around 1695 and 1704. It is the characteristic ovoid shape, with a signature in ink on both sides.

It is decorated with shallow, thin lines crossing the coin – quite different to the deep, thick lines on most Obans. The signature is almost complete, and there’s additional graffiti on the reverse. The control marks and Kiri stamps are uneven.

The method of decoration marks this out as an unusual example – and unusual means exciting for collectors. It had been assessed by the PCGS when it was offered for sale, achieving a grading of mint state 61. 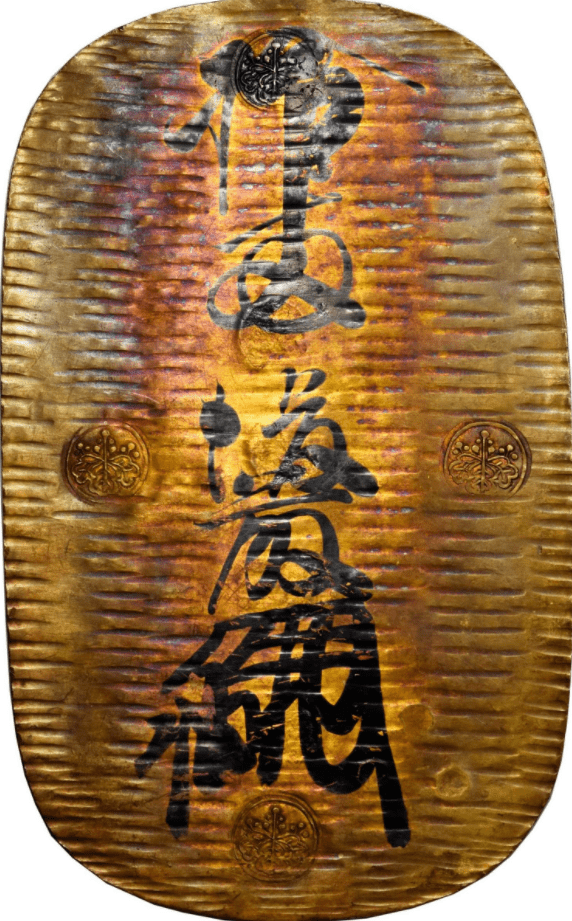 This is another attractive Oban dating from the Genroku era. It is in good condition for a coin of its age, graded mint state 62 by the PCGS. And it has an attractive and distinctive rainbow colored patina on both sides.

The signature is in good condition, with minor loss of ink at the high points. There’s another inscription in ink on the reverse.

It’s in many ways very similar to the specimen graded MS61. The main difference is in the style of the control marks on the reverse. 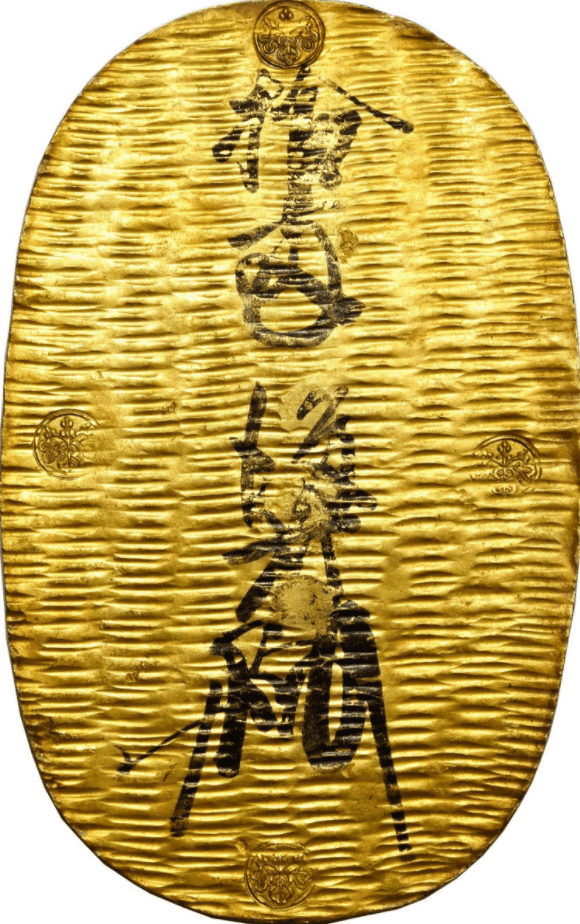 This Oban is an early example that dates from the Tensho era. Like other Obans, it is covered in hammer marks. But in this case, they’re arranged in columns, rather than the random positioning found on most specimens of this date.

In fact, the style of both the hammer marks and the signature are ahead of their time. They more closely resemble those found on Obans made in the Keicho era, from 1596 to 1615.

There are unevenly applied Kiri stamps and official emblems, and there’s a clear control mark on the reverse.

The unusual nature of this Oban meant that it was of considerable interest to collectors. It was sold at auction in 2021, and achieved a price of $156,000.

This 2 Yen coin dates from 1880, year 13 of the reign of Emperor Meiji. It was a year in which relatively few coins were minted, making survivors highly collectable. And 2 yen coins are the rarest of all the gold coins produced that year.

This one is also a very attractive example. It has smooth, reflective fields, with contrasting frost on the raised parts of the design. But it does have one problem. Look closely at the field on the left hand side of the dragon’s mouth, and you’ll see several thin scratches.

It was for this reason that the PCGS, whilst confirming the coin’s authenticity, declined to give it a numerical grade. And when it was offered for sale at auction, the estimate was a relatively modest $50,000 to $70,000. 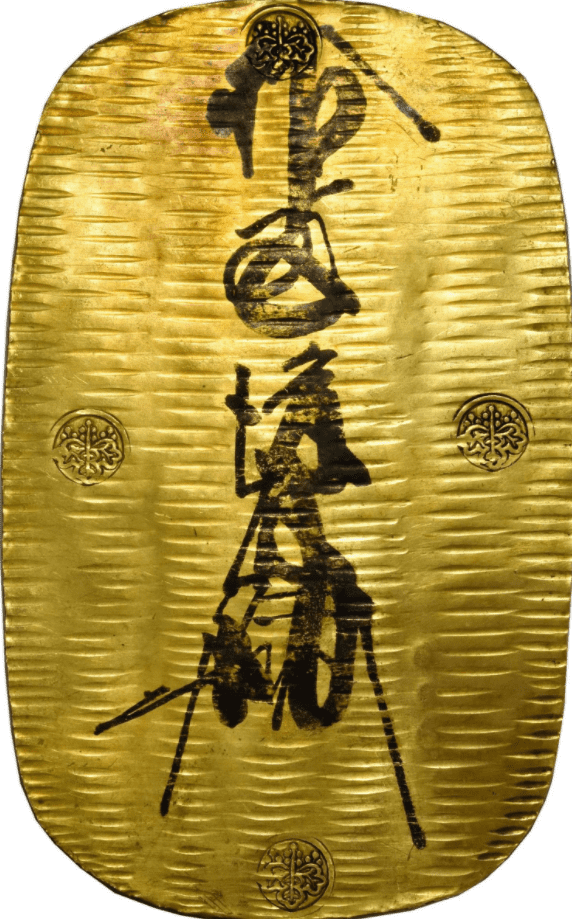 This Oban dates from the Keicho era of the 17th century. It has hammer marks in a neat series of seven columns. The Kiri marks and control marks are uneven. And on the reverse side, the control marks are neatly aligned, making this quite an unusual example.

The ink signature has some areas of fading, and the same is true of the additional ink inscription on the reverse. And the reverse also has two white stickers, with Japanese characters written on them.

Over 16,500 Obans of this kind were minted. But this one was graded mint state 62 by the PCGS, making it the finest known example in existence. 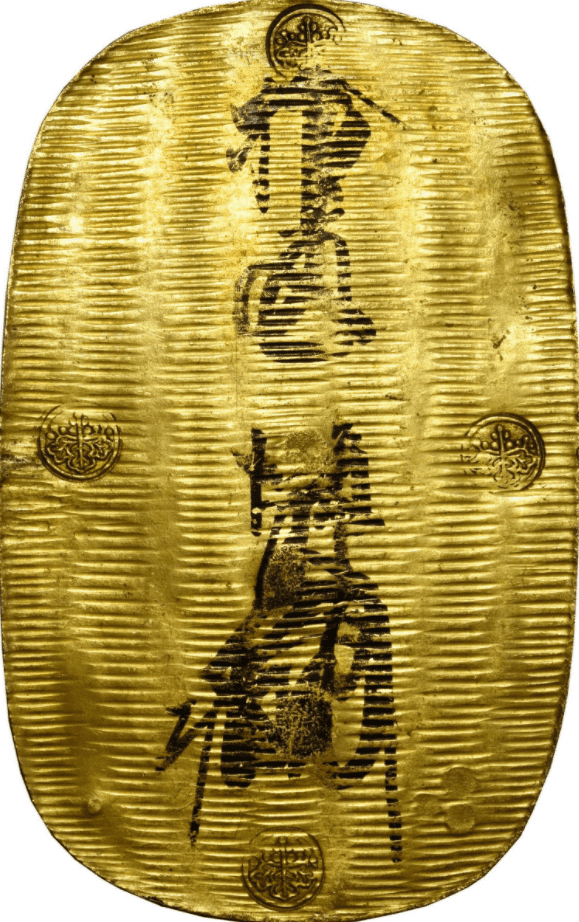 This Oban is another that dates from the Keicho era.

Like other Obans of this period, the hammer marks are neatly arranged in seven columns. The ink signature has some signs of fading on the highest points. There are uneven Kiri marks, clear, bold control marks, and an extra mark on the reverse.

The style is an interesting combination of Keicho and the succeeding Genroku era. The coin was graded mint state 61 by the PCGS, and bears evidence of light handling. The gold is an attractive pale yellow.

The Koban was a coin used in the Edo feudal period in Japan. It was a key part of the Tokugawa coinage and had a value of 1 ryo.

This specimen was made from gold mined on the island of Sado. That makes it one of the most desirable types of Koban for collectors. It was also in excellent condition, with few signs of handling, neat and even chisel marks, and well struck stamps.

All this makes it very rare. And it had been certified as the genuine article by the PCGS.

The Most Precious Japanese Coins

That brings us to the end of our tour of the most valuable Japanese coins out there. We hope you’ve enjoyed learning more about these beautiful and precious objects.

And although these are the crème de la crème, you don’t have to be a multimillionaire to collect Japanese coins. You can pick up interesting and elegant examples at all price points.