In the world of numismatics, or coin collecting, coins from all over the world can fetch high prices. We’re going to look at the most valuable Italian coins to have been sold in recent years. We’ll find out just what makes them special, and exactly how much they’re worth.

So if you’re sitting comfortably, read on to find out more … 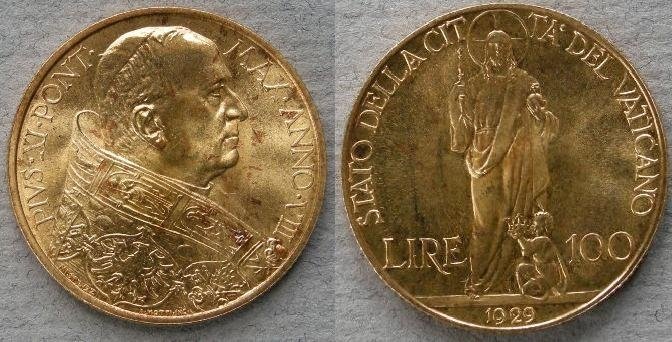 This beautiful coin comes from the Vatican City State, the independent state that sits inside the borders of Italy.  It was minted in 1929 and bears the portrait of Pope Pius XI in profile facing right.

It has a glowing gold finish and was rated as MS66 by the independent Professional Coin Grading Service, the PCGS. The designation MS means that it’s “mint state”, a coin produced as currency but never circulated.

The numbers relate to the quality of the strike and the condition of the coin. The highest possible grading is 70, for a perfectly struck coin in perfect condition. At 66, this coin meets the definition of “gem quality”, reserved for coins graded 65 and above.

This particular coin in this condition is rare. Only five are known to exist, and there is only one finer, graded at MS67.

It came up for auction in August 2018, through coin specialists Stack’s Bowers. It comfortably exceeded its pre-sale estimate of $400 to $500, making $780. 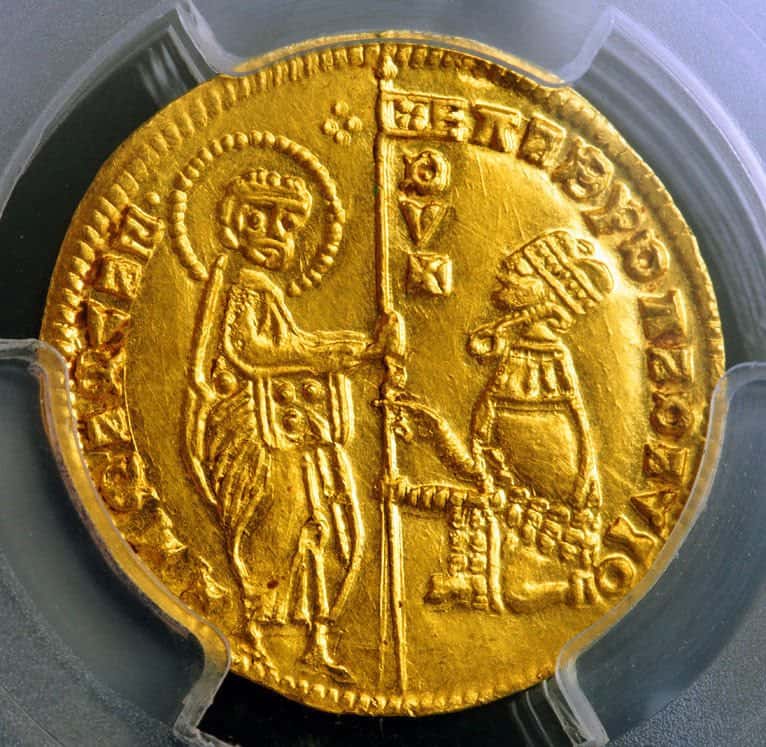 This beautiful gold coin is almost a thousand years old. It was minted for the Duchy of Achaia, now part of Italy, in the year 1346.

The small coin is unmistakeably medieval. One side depicts a haloed St Mark holding out a banner to a kneeling Doge. The other side carries the image of Christ, surrounded by stars and with a hand raised in blessing.

The coin was once considered extremely rare, but that changed in 2010 when a small horde was found. This one, however, is a variant design and the only one known to exist. It was graded MS61 by the PCGS, and sold via the online auction site eBay in June 2019.

It achieved a hammer price of $1,349. And this being eBay, the lucky buyer didn’t have to pay commission on top of the sale price. 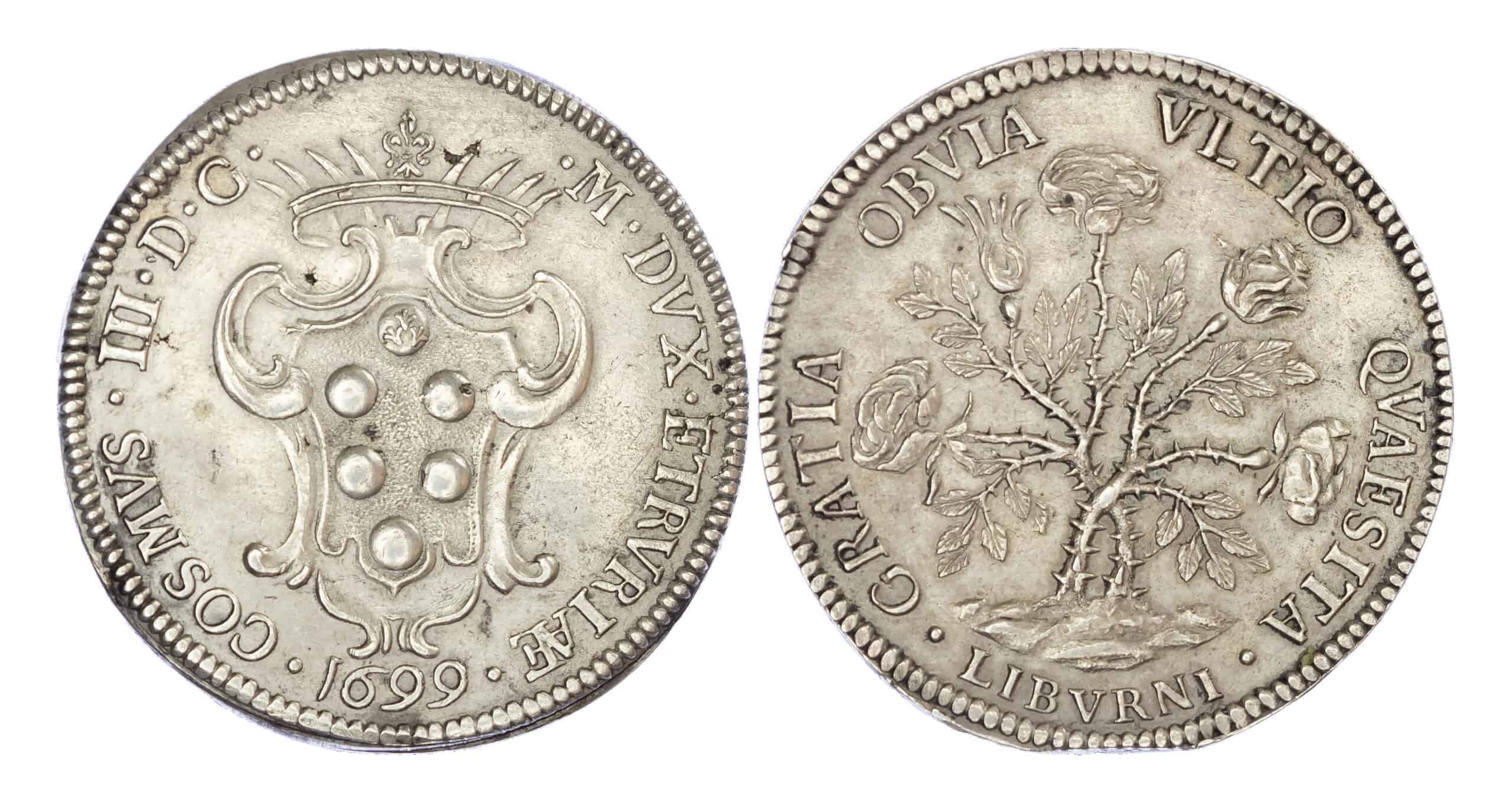 This lovely silver coin dating from 1699 was minted for the Italian city state of Livorno. On one side it bears the crowned coat of arms of the Medici family. On the other is depicted a rose bush, rendered in exquisite detail.

The coin was minted in Florence, and produced for Cosimo II de’ Medici, the Grand Duke of Tuscany from 1670 to 1723. His reign was the longest in Tuscan history, and was notable for its laws governing prostitution and May Day celebrations.

At the time of writing, a couple of examples of this coin were about to come to auction, with guide prices ranging from around 1,200 to 4,400 Euros. The example shown in the image, rated by the seller as “extremely fine” (but with no independent grading), could be purchased for $4,600. 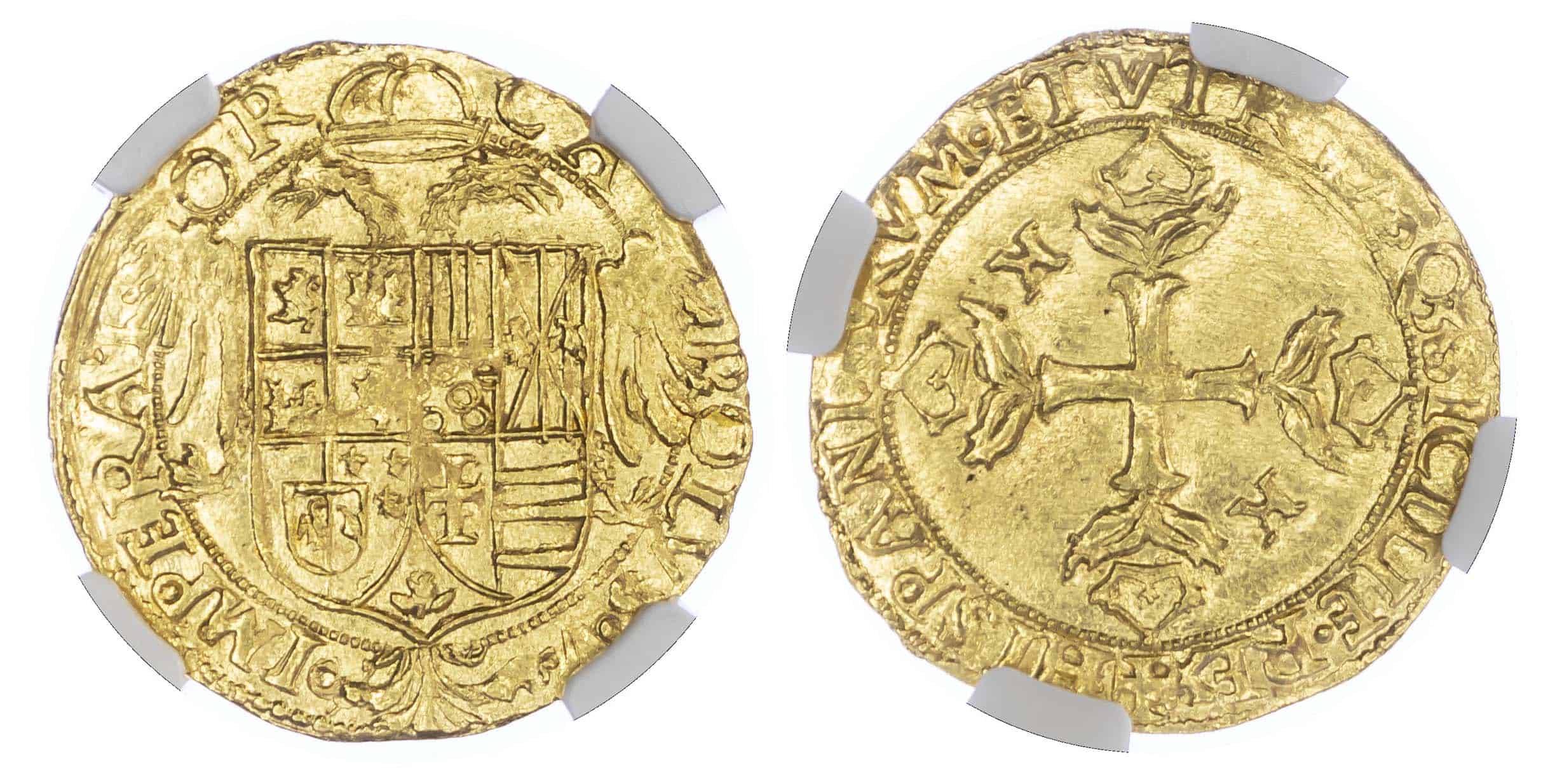 This beautiful coin was used as currency in the city of Naples around 500 years ago. The word scudo describes coins used in the city states of the Italian peninsula until the 19th century. They were more usually made in silver, but this version has been crafted in gold.

That alone would make it rather special. But it is also graded MS64 by the NGC, just one point short of gem classification. And it’s the finest known example of this coin in existence.

On one side it bears the crowned coat of arms of Emperor Charles V, who reigned from 1516 to 1556. On the reverse there is an elaborate Greek cross with crowns at the end of each of the arms. 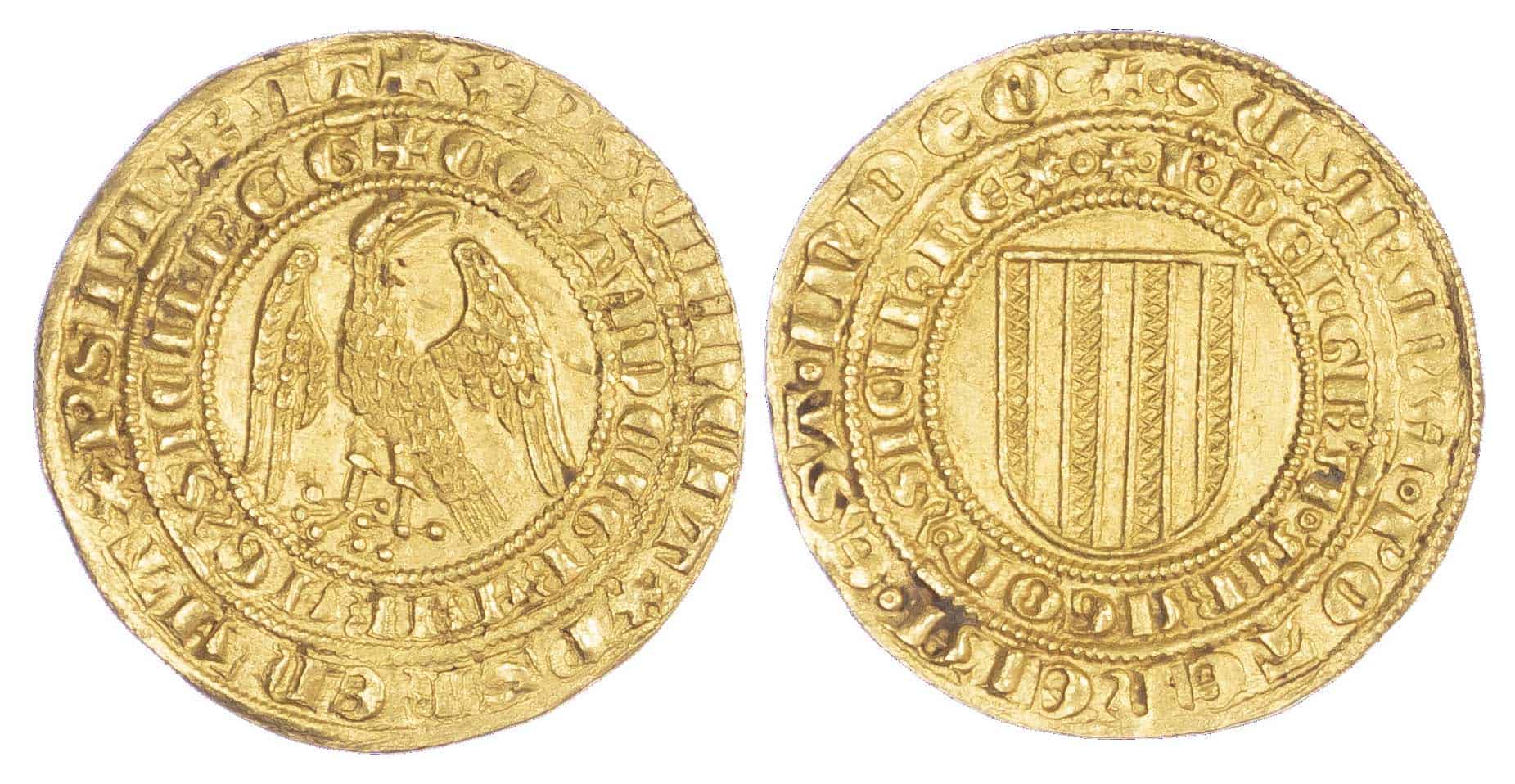 Here is another example of a beautiful Italian gold coin. And this one dates back almost 1,000 years.

It is in remarkable condition for a coin of such age. The detail on both sides remains crisp and clean. There is only a minor scratch on the obverse, which carries the image of an eagle surrounded by two bands of text. The reverse depicts a shield, the arms of the Aragon family.

The combination of shield and eagle makes this a type of coin known as a “pierreale”. And the fact that it is gold rather than the more usual silver makes it very desirable to collectors. 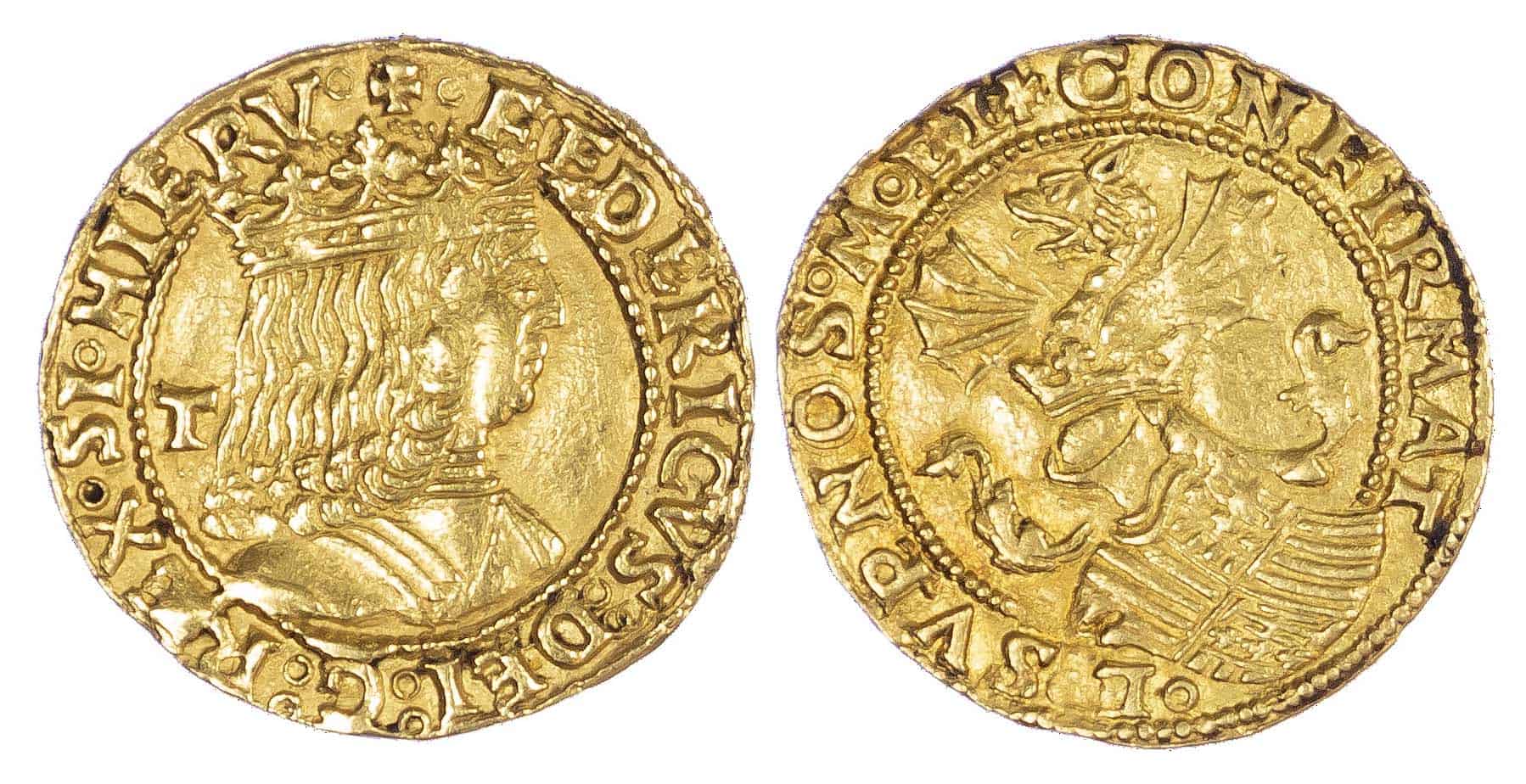 This coin was minted for use in Naples during the reign of Federico IV, more commonly known as Frederick IV or Frederick of Aragon. That dates it to somewhere between 1496 and 1501.

Frederick was the last King of Naples to come from the House of Trastámara. He was deposed in 1501, and Naples then passed to the Spanish.

The obverse of the coin shows a bust of a crowned Frederick facing to the right. Just behind his head there’s a “T”, signifying that the coin was crafted by the mint-master Gian Carlo Tramontano.

The reverse has a dramatic design of the curved arms of the Aragon family surmounted by a dragon.

This is a ducat, a gold coin used across Europe between the 13th and 19th centuries. The coins usually contained about 3.5 grams of gold.

This one is well struck, and at the time of writing was being offered for sale through Baldwin’s. They had graded it “very fine to nearly extremely fine”. The price if you wanted to add it to your collection? £11,000. That’s about $12,700. 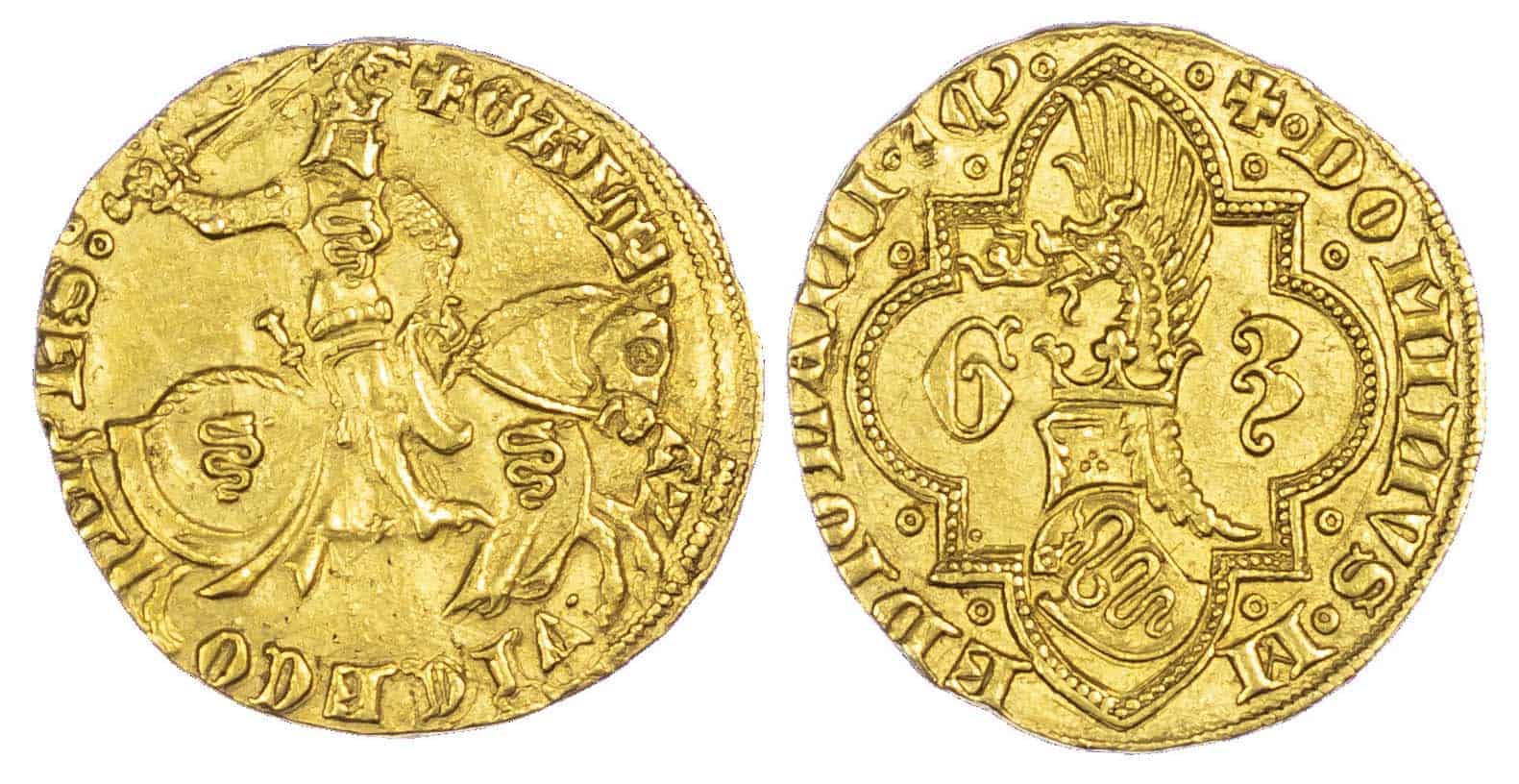 This beautiful coin bears the dramatic image of Gian Galeazzo Visconti, the first Duke of Milan. He is shown on horseback, standing in the stirrups, one arm raised as though about to strike with his sword.

The other side shows a shield with a biscione – a large coiled snake used as a heraldic device – and a helmet with a dragon crest.

The Duke reigned from 1395 to 1402. In common with many rulers of the time, he had a colorful history. He had deposed his uncle to take the throne, faking a religious conversion in the process. His uncle was later imprisoned and supposedly poisoned on his nephew’s orders.

Later in life, the Duke reacted to scurrilous gossip at the French court about his daughter Valentina by threatening war with France. In short, he was quite a character. 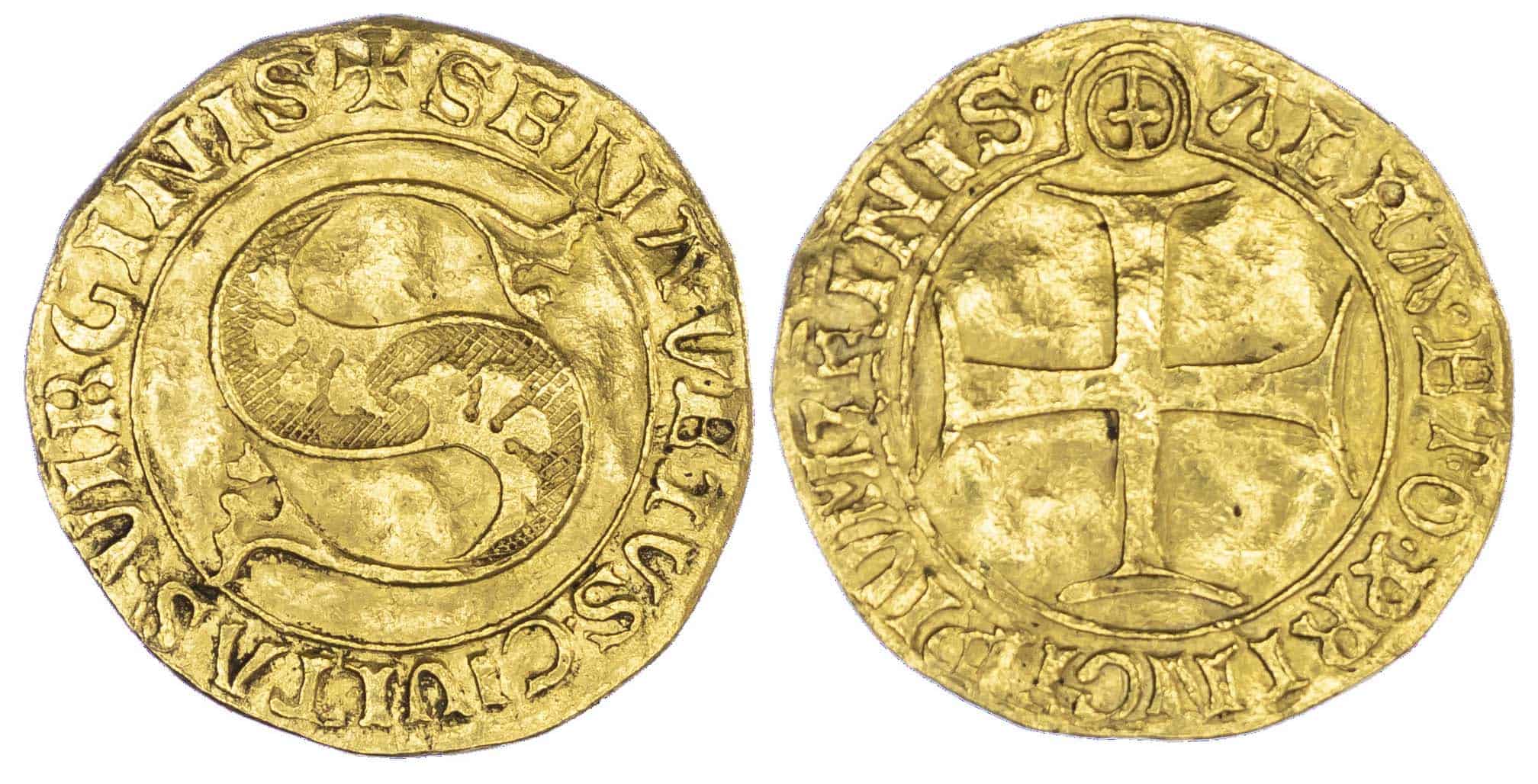 This coin is what’s known as a fiorino largo. It’s a little smaller than a florin or a ducat, and this example weighs 3.14 grams.

It’s made of pure gold and carries a large “S” on one side for “Siena”, where it was used as currency. The other side features a large cross within a circle.

Because it doesn’t carry the image of a ruler, dating it precisely is difficult. It could have been struck anywhere between 1404 and 1555.

At the time of writing, it was on sale through British coin dealers Baldwin’s, who rated its condition as “Good very fine”. They noted, however, that the planchet – the metal disc on which the coin was struck – was somewhat wavy.

That, together with the uncertain date, made this coin a veritable bargain. You could pick up this slice of Italian history for just £2,000. That’s around $2,300. 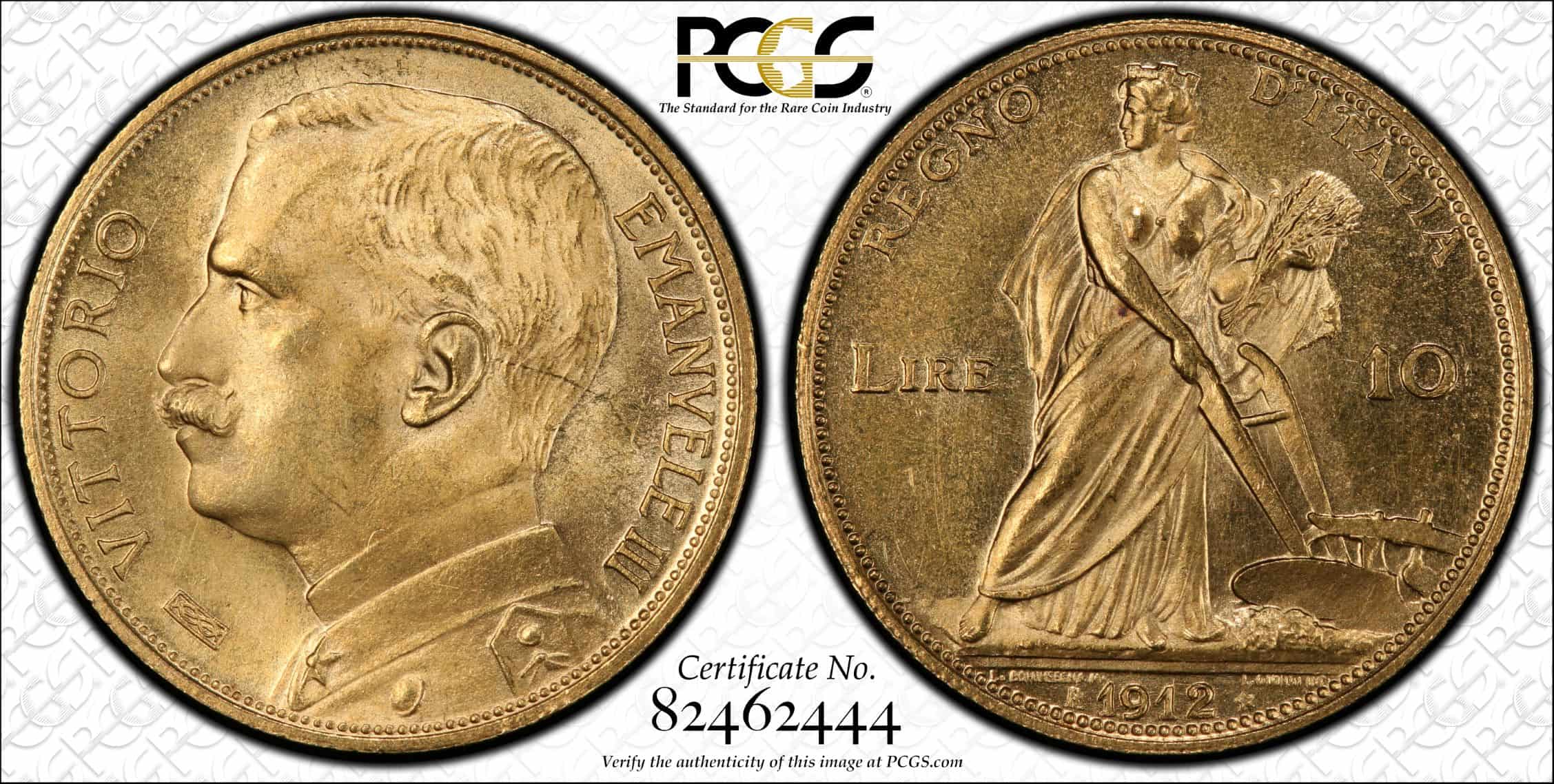 This lovely 10 Lire coin shows that coins don’t have to be hundreds of years old to command a premium price. It dates from 1912 and bears the portrait of Victor Emmanuel III, King of Italy for almost 46 years.

The coin is in lovely condition, graded MS65 by the PCGS, and earning it the classification of “gem”. It is one of only three coins of such quality known to exist, with only one finer, an MS66 specimen. 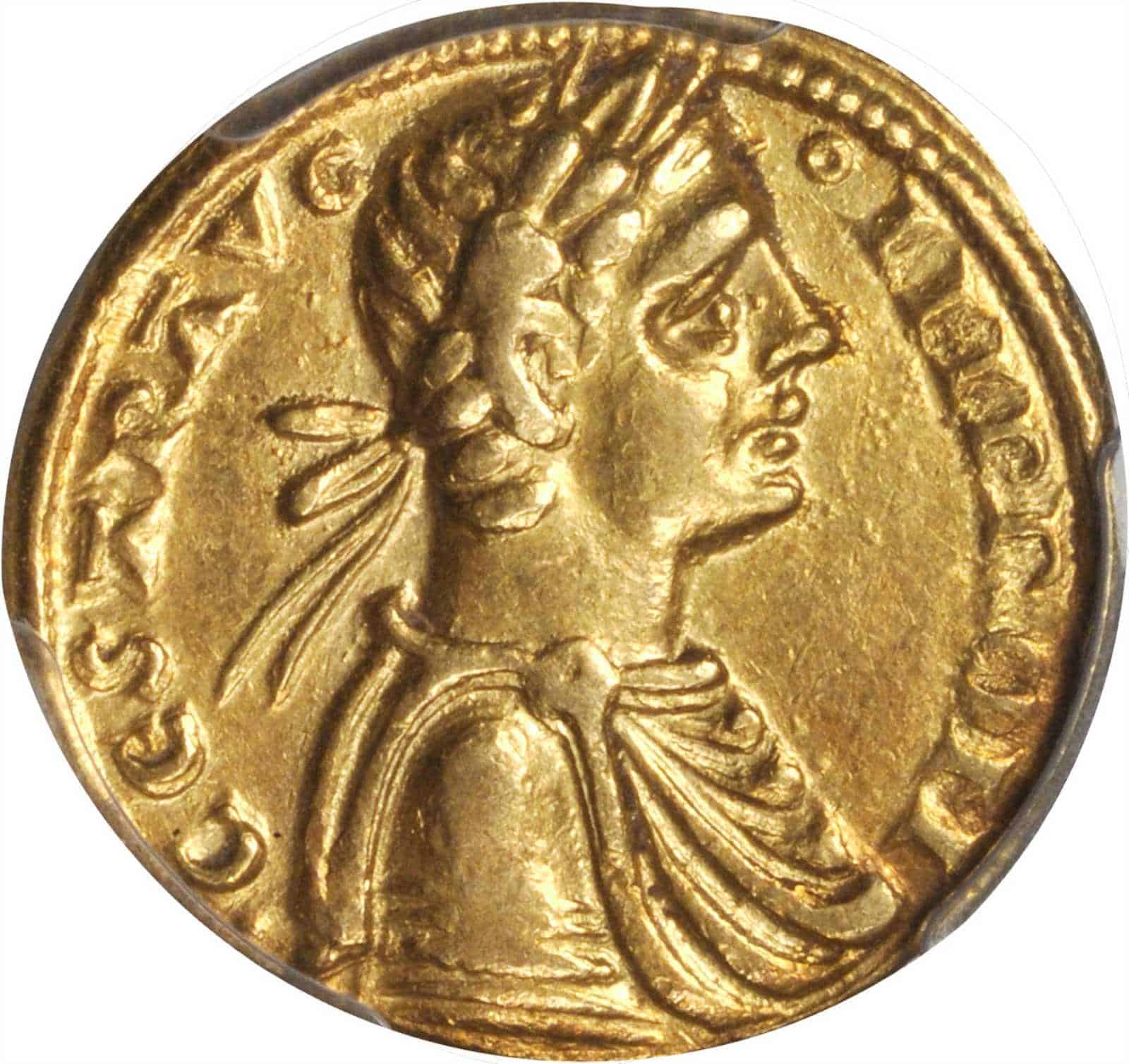 This beautiful gold coin is around a thousand years old. It dates to the reign of Frederick II, one of the most powerful rulers of the Middle Ages. He sponsored several of the Crusades of the 13th century, and played a key role in the codification of the Italian language.

The portrait shows Frederick in the style of the Roman emperors, after whom he modeled himself. He wears a toga, and his head is adorned with a laurel wreath. The reverse side bears the image of an eagle.

The coin was evidently used, and bears light signs of wear on its raised surfaces. It is nevertheless in astonishing condition for an artefact of such age. 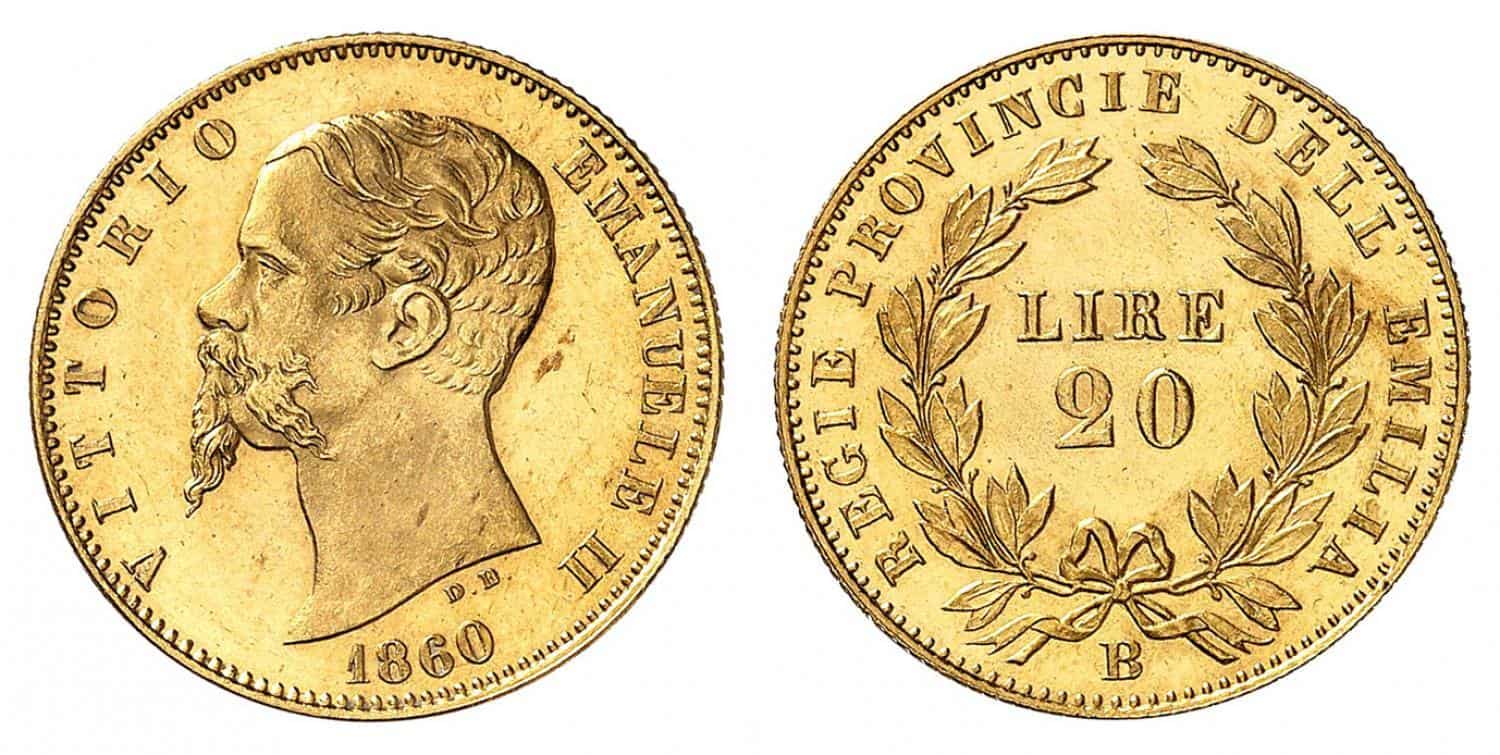 This 20 lire coin is amongst the rarest Italian coins ever sold at auction. It dates to 1860 and was struck at the mint in Bologna.

What makes it so rare is that it was struck for the region of Emilia. This happened just before the unification of Italy in 1861. (The creation of the country as we know it today came later, with the addition of Venetia in 1866 and the Papal States in 1870.)

With change already on the horizon, only a small number of these coins were struck for the transitional period. 159 are known to have been minted in 1860 at Bologna. And of those, this one, graded MS65, is the finest quality in existence. 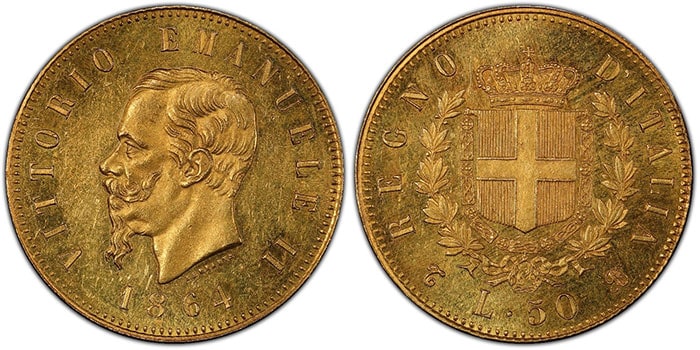 This coin from 1864 bears the image of Victor Emmanuel II. He was King of Sardinia until the unification of Italy, when he became the country’s first king.

This 1864 coin, struck at the mint in Turin, is one of only around 100 known to have ever been made. Any specimens are collectable, and those in better condition can fetch significant sums.

This is the second coin featuring a portrait of Victor Emmanuel III to make our list. This one dates from 1927, and it was produced at the mint in Rome. It’s extremely rare – only 30 such coins were known to have ever been made.

It’s not surprising, then, that collectors get excited when examples come up for sale. Most recently, a coin sold in 2017 for just shy of $160,000. It was graded “FDC”, a designation meaning “fleur de coin” and used for coins considered exceptional and perfect.

This example, though, had been graded by the PCGS, using its more detailed grading system. It was graded MS65, an uncirculated coin of gem quality. And it sold at auction in Geneva 2014 for the truly breathtaking price of 360,000 Swiss Francs. That’s about $372,250.

That brings us to the end of our look at some of the most valuable Italian coins to be offered for sale in recent years. From ancient artefacts to mementos of modern history, these coins are both beautiful and fascinating.

We hope you’ve enjoyed learning more about them.