German coin making history stretches back over many centuries. And each coin provides a fascinating snapshot of life in Germany, and the states that preceded it.

Some can command astonishing prices. And if you’re searching for the most valuable German coin, you’ve come to the right place. We’re going to share details of some of the most precious specimens to have come to the market in recent years.

Ready to find out more? Step this way. 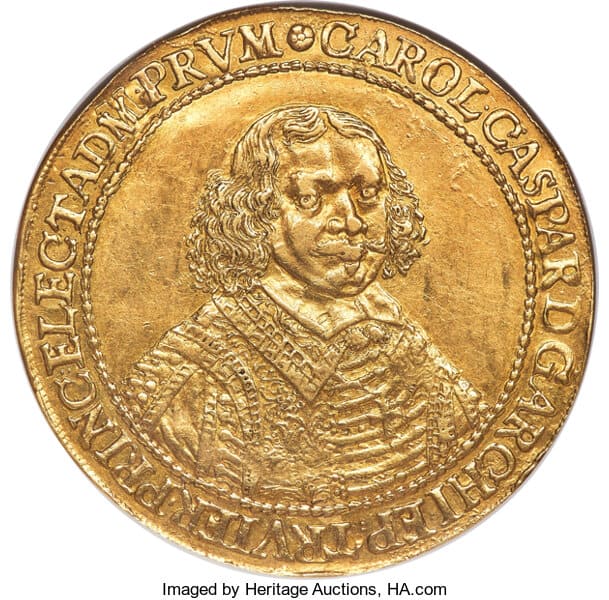 This handsome gold coin dates from the 17th century, at a time when the different German states still had their own currencies.

On one side, there’s a portrait of Karl Kaspar von der Leyen. He was Archbishop Elector of Trier – both an archbishop and one of those who elected the emperor of the Holy Roman Empire. The other side bears a coat of arms surmounted by the elector’s hat, together with the date of 1659.

The portrait is somewhat unusual for a coin, in that Karl Kaspar is shown in three-quarter profile. And this is the only known example of its kind.

It was graded by the independent coin assessors the Numismatic Guaranty Company, or NGC, as AU58. The AU stands for “almost uncirculated”, and the 58 is a mark out of 70 for quality and condition.  The grading means that the coin was used, but that there are minimal signs of wear.

But the rarity and condition of this coin meant it was worth a great deal more to collectors. When it was presented at auction, it achieved a price of $156,000, including the buyer’s premium. 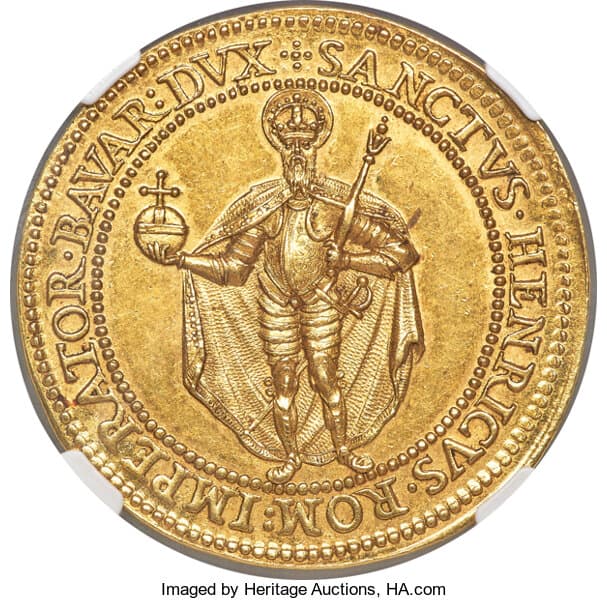 Here’s another beautiful gold coin produced for the German states. In this case, it was for Bavaria, and it’s even older than the Karl Kaspar coin we’ve just looked at. This one dates from the very end of the sixteenth century, 1598.

On one side, there’s a full-length portrait of Saint Heinrich, wearing a suit of armor and carrying an orb and scepter. The other shows the coat of arms of Bavaria and Pfalz, the date, and the electoral hat.

The coin was issued to commemorate the homage of Maximilian I, part of the coronation ceremony. Maximilian was the Prince-Elector of Bavaria. And like Karl Kaspar, he would have had a vote in the election for the emperor of the Holy Roman Emperor.

The coin was in excellent condition at the time of its sale, graded MS – mint state – 62+. That means it is a coin never intended for circulation, and bears no signs of handling.

But while it’s exceptionally rare, it’s not the only example of its type. Perhaps it was for that reason that, despite its other advantages, it made the same price at auction as the Karl Kaspar coin: $156,000. 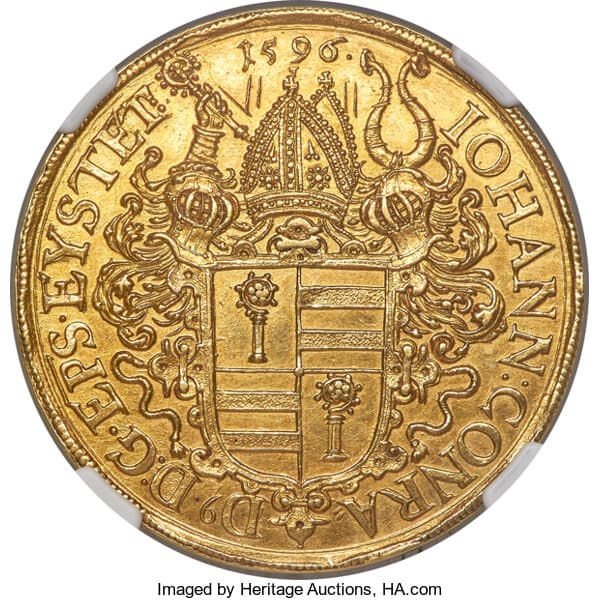 This coin comes from the German state of Eichstätt. It’s a large 8 ducat piece, and it was struck by  Valentin Maler, considered one of the most important engravers of the time.

It was probably produced to commemorate the consecration of Johann Conrad von Gemmingen as Prince-Bishop in 1595. But this coin carries the date of 1596, which makes it extremely rare. It’s thought to be the only such coin available to the private market (one other is in a state collection).

It was authenticated by the NGC, and graded UNC Details. This means that the coin is uncirculated, but it hasn’t been given a numerical grading. That’s because one side of this coin has graffiti – a “VIII” scratched onto the obverse side.

That probably refers to the value of the coin at 8 ducats. And when the coin was presented for sale, the auctioneer’s catalogue theorised that the graffiti was contemporary to the coin.

It came to auction in 2021. Even with the graffiti, one collector was prepared to pay $168,000, including the buyer’s premium, to take it home. 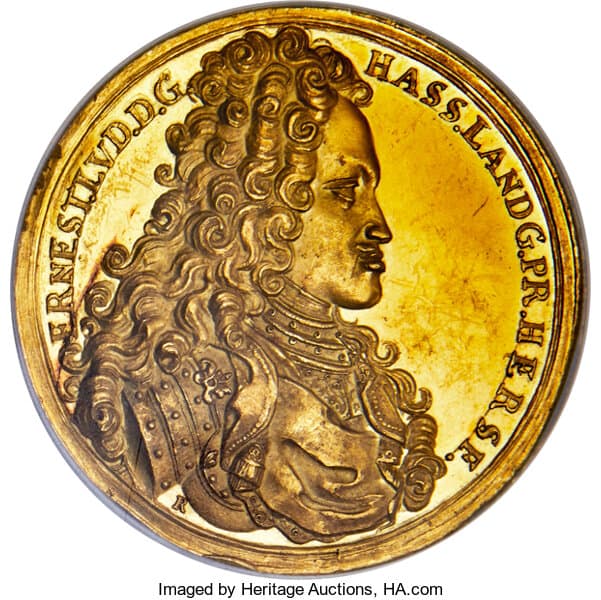 This large and beautiful gold coin is thought to be the only one of its kind in existence.

It was graded mint state 62+ by the NGC, who thought it was a 25 ducat piece. But the weight of the gold is consistent with a value of 27 ducats. In common with many coins of the time, it didn’t carry a denomination on its face.

The engraving is the work of Johann C. Roth, a highly celebrated craftsman. And some believe this coin to be the finest example of his genius.

The most similar coin known to exist is from the same year – but it’s smaller, made of silver, and the design is slightly different.

That made this a unique specimen, and highly desirable to collectors. And when it came under the hammer in 2021, it made $180,000, including the buyer’s premium. 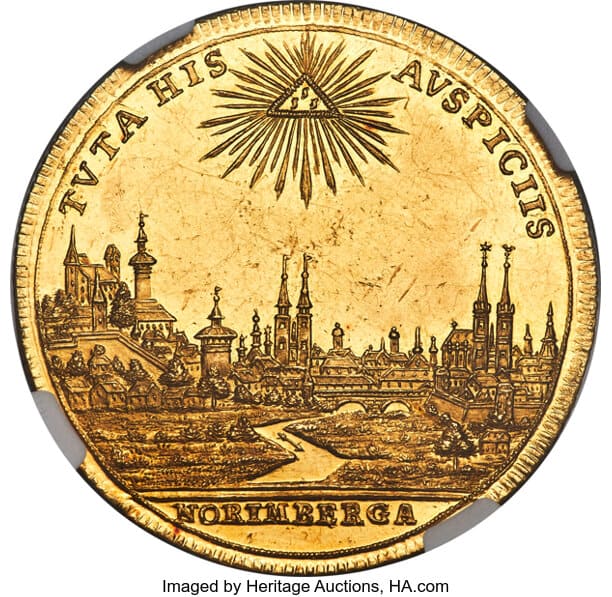 In 1745, the city of Nürnberg, known to us today as Nuremberg, was a free city – i.e. an independent city state – within the Holy Roman Empire.

At one time, it was one of the most important cities in the whole of Europe. But over time its fortunes declined, and in 1806 it was absorbed into the state of Bavaria.

This 6 ducat gold coin bears a beautiful engraving of the cityscape on the reverse. On the other side is a portrait of Emperor Franz 1.

It was graded by the NGC as MS60, and noted as being “prooflike” in its quality. Proof coins are even finer than coins in mint state, having been specially struck for archives or collectors.

It was also quite a rare coin. Only five had been auctioned in the two decades before this one was presented for sale. And when it came under the auctioneer’s hammer in 2021, it sold for an amazing $216,000.

Regensburg was another independent city state with its own coinage. And it’s there that this 6 ducat coin was destined for use. This one, though, was graded by the NGC as mint state, suggesting that it had never actually been circulated.

It’s excellent quality too, graded 62*. The star denotes a coin with exceptional “eye appeal” – in other words, it looks good. And it has a quality of strike that’s almost as good as a proof.

On one side it bears the portrait, names and titles of Emperor Franz I. On the other there is a beautifully detailed picture of the city of Regensburg. It’s undated, but would have been struck between 1745 and 1765.

Only three such coins are believed to have been created. It is possible that they marked the Treaty of Dresden. One theory is that a coin was presented to the head of state of each of the three powers who signed the treaty.

Whatever its true origins, it’s a beautiful and historic coin. And when it was presented at auction in 2021, it sold for $240,000.

This 10 ducat coin was struck for the German state of Saxony in 1611.

It’s a lovely piece, graded MS65* by the NGC. That puts it into the highest category of coins, known as “gems”. And the star denotes its added visual appeal.

On one side it has a half-length portrait of the Prince-Elector Christian II wearing armor, alongside his helmet. The inscription on the reverse signifies that this was a “death” coin, struck to mark the Prince’s passing.

This coin marks a critical point in the conflict known as the War of the First Coalition.  It celebrates the relief of the German city of Mainz, which had been under siege by the French. One side features a stone monument, the other a cityscape of Mainz.

The coin was graded mint state 62, with a star designation, by the NGC. The quality of the strike is such that it’s possible it was produced for presentation to an important person. Perhaps they were involved in the conflict in some way.

Even more excitingly for collectors, it’s the only known example of its type. 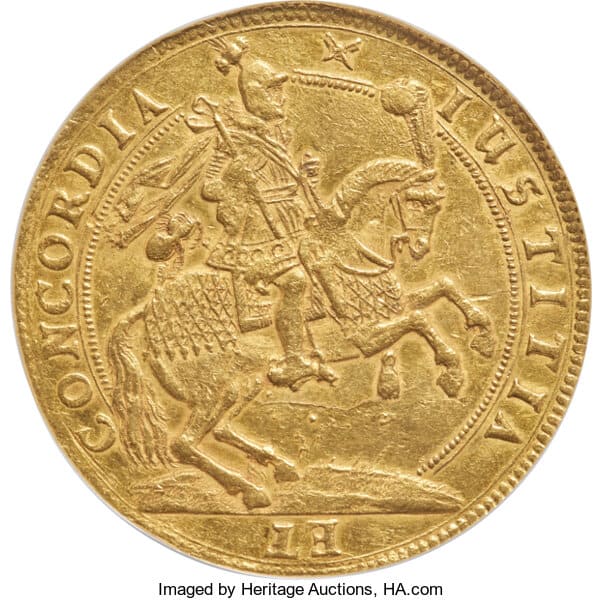 This large gold coin was very precious even when it was first made, with a value of 20 ducats. It isn’t marked with a date, but would have been crafted between 1611 and 1633. Those were the dates when Christian the Elder, shown on the coin, controlled the principality of Lüneburg.

Christian was the Bishop of Minden. He took over Lüneburg on the death of his elder brother, and held it until his death.

This coin is the only known example of its type in existence. One side bears the portrait of Christian on horseback, the other his coat of arms. The coin has the motto “justice and concord”. It’s perhaps a reference to the imperial troops which occupied the bishopric from 1623. 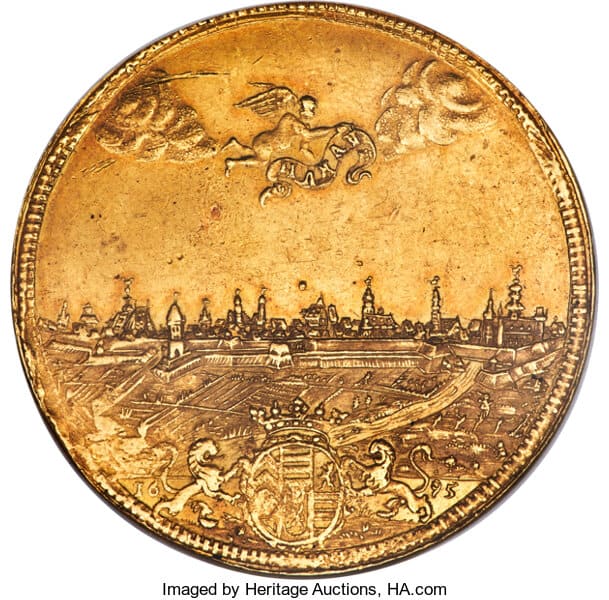 This 10 ducat coin is one of only two examples ever minted in gold for the German state of Hanau-Lichtenberg. And it is the only one to have been struck in 1695.

It was crafted during the reign of Philipp Reinhard. The obverse bears his portrait, while the reverse has one of only a handful of portraits of the city of Lichtenberg at this time.

The writing – known as “legends” – on the obverse appear to have been double struck. The letters “RE” can be made out beneath the “TZ”.

It isn’t in the very finest condition. The NGC graded it AU58, for “almost uncirculated”, and it does have some light signs of wear. But when a coin is as rare as this one, that doesn’t stop it from commanding a very high price. 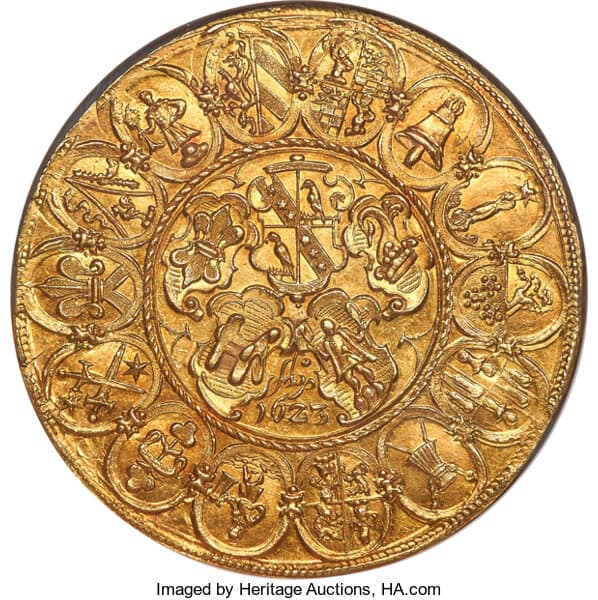 This coin, struck for the independent city state of Memmingen, dates from 1623. It’s made of gold and had a value of 10 ducats.

It’s exceptionally beautiful. The obverse shows Memmingen itself in striking detail. The reverse has a complicated pattern including the coats of arms of three mayors and two cities, surrounded by the 14 shields of other council members.

The coin is of a kind known as a Regimenstaler. These were more usually struck in silver. And this is the only known specimen from Memmingen to have been made of gold instead. It may perhaps have been specially struck as a gift for a distinguished official.

That brings us to the end of our look at the contenders for the most valuable German coin. These coins are both beautiful and precious, marking fascinating moments in the history of the German states.

Their gold construction means they’re also appealing to anyone who likes their coins to have some bling!

We hope you’ve enjoyed learning more about these wonderful specimens.

How much is a 1910 DEUTSCHES REICH 10 MARK OTTO KOENIG V BAYERN WORTH?