France is known for its long history and rich culture. So it’s not surprising that some of its currency is worth serious money to collectors.

We’re going to take a tour of the most valuable French coins to have come to the market in recent years. And we’ll find out just how much they’re worth.

Strictly speaking, this is a medallion rather than a coin. It was struck in 1803 to celebrate the visit of Napoleon to the Paris Mint.

One side carries the portrait of the man himself, shown in profile and presented as “Premier Consul” – First Consul of France. It is nearly the same as the 5-franc coins produced two years earlier. But there are subtle variations, like the style and position of the engraver’s initials beneath the bust.

Being struck on gold also made it extremely rare, as well as giving it an intrinsic value. When it was offered for sale in August 2022, only two other examples had made it onto the market in the previous decade.

And it was in very good condition – graded a “specimen” by the independent coin accessors the Professional Coin Grading Service, or PCGS. Specimen coins are those that are higher quality than mint state coins, but not quite at the level of a proof.

All these attributes made this a very desirable piece for collectors. The winning bidder had to pay $95,000 to take it home.

This coin from 1867 bears the unusual denomination of both 5 dollars and 25 francs.

It was struck for one of the multiple international monetary conferences that took place in the nineteenth century. This one was held at the Paris Exhibition. And over 100 years before the introduction of the Euro, it looked towards multinational monetary union and a single gold standard.

The obverse (the front) of the coin carries the portrait of Napoleon III. He was the nephew of Napoleon I and the last king of France.

A coin like this was never intended to be circulated. It was designated a proof by the Numismatic Guaranty Company, or NGC, another independent coin grading agency. Its mark of 63 points out of a possible 70 means small hairlines are visible without magnification.

This coin was struck in 1815 during the period between Napoleon Bonaparte’s return from exile and the restoration of King Louis XVIII. The period was actually 111 days, but is generally referred to as 100 days with a little artistic license.

The type of coin isn’t particularly rare – but the condition of this specimen certainly is. It was graded mint state 64 by the PCGS, leaving it just one point shy of what’s known as “gem quality”. And only two such coins graded higher are known to exist on the planet.

So it’s not surprising that when this one came up for auction in 2022, it attracted lots of interest. It sold for $12,000, excluding the buyer’s premium. 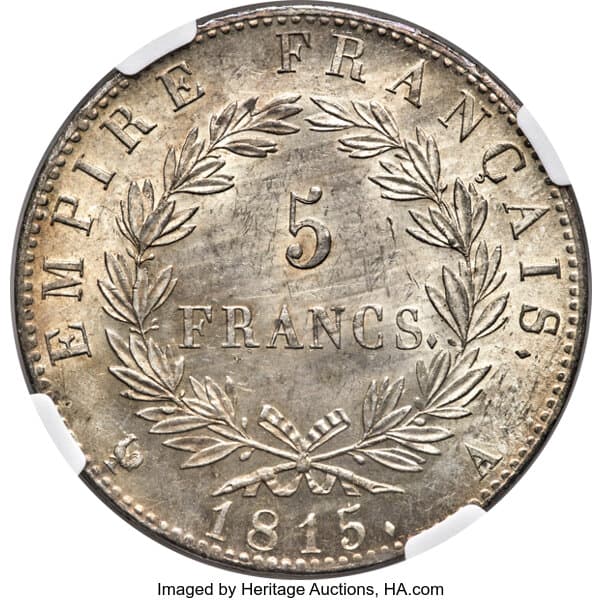 This is another coin from that turbulent 100 day period in 1815. This one, however, is a 5-franc denomination.

Like the 2-franc specimen, it was graded MS64, although in this case the grading agency was the Numismatic Guaranty Company. And for this denomination, only one finer example was known to exist.

It was also very attractive. It had what the auctioneers described as a “tangerine skin” with a “mint brilliance”.

It came up for auction in February 2022, six months before the sale at which the 2-franc coin was presented. The hammer price? An impressive $24,000.

This attractive coin from 1724 features a famous design known as the “Mirliton”, or “eunuch flute”. It was supposedly a reference to a popular song from the time which mocked Cardinal Dubois, finance minister to Louis XV.

These coins were known to have been minted in only two years, with the 1724 version being the rarest. Almost all the examples known to exist were recovered off the coast of Nova Scotia from the wreck of a ship called Le Chameau.

Not surprisingly, many of those coins suffered considerable water damage. This one, however, was graded MS62 by the PCGS. And it was tied in joint place for the finest quality example in existence. 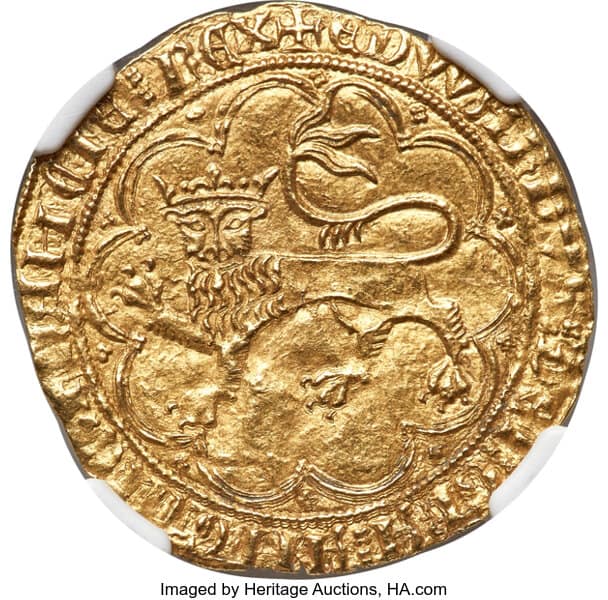 This coin was struck at the Bordeaux Mint almost 700 years ago for the French region of Aquitaine.

The coin is known as the Leopard d’Or, or golden leopard, after the crowned leopard which appears on the obverse.

It’s one of two variants, known as the Elias-39a. In this one, a saltire (cross) appears in the spandrel directly behind the leopard’s tail, roughly in the three o’clock position. The other variant has a mullet in that spandrel instead.

It’s considerably rarer both than the other variant, and a third type which was struck later. And when it came to auction in August 2022, it sold for $15,000.

This beautiful gold coin dates from the reign of Louis XIII. It was minted in Paris in 1641. Examples from the previous year are relatively easy to find, but there are far fewer coins from this mintage.

This particular coin is particularly desirable because it’s in mint state, and graded 62+ by the NGC. Look closely at the portrait of Louis XIII on the obverse, and you’ll see each strand of hair clearly delineated. His facial features are crisp and detailed too.

On the reverse a cross is depicted. Each arm is formed by a pair of Ls for Louis, and terminates in a crown. Four fleurs de lys are positioned at the diagonals.

Only three of these coins are known to exist, and this is the only one in mint state. It sold at auction in August 2022 for $19,000, not including the buyer’s fees.

This elaborate gold token was struck to commemorate the coronation of Louis XV in 1722. One side bears the portrait of the king in profile, his wig curled luxuriantly over his shoulders. The other shows him being anointed, surrounded by courtiers and clergy, in the cathedral at Reims.

The tokens would have been presented to the crowd outside the cathedral at the end of the ceremony. Most would have been made of silver and brass, but a lucky few would have received a version in gold.

Today, only a handful are known to exist. And this one, rated mint state 62 by the NGC, is a rare find. It was presented for auction in June 2022, and achieved a hammer price of about $18,000. 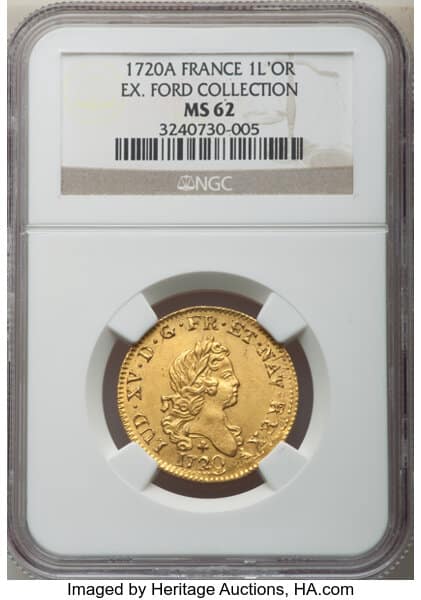 This attractive gold coin is another minted during the reign of Louis XV, the French king known as Louis the Well-Beloved. It’s dated 1720, but struck over a 1718 coin.

You can pick up Louis d’Or (Golden Louis) in lower grades for a more modest investment. At the time of writing, a circulated coin graded “very fine” was on offer for around $2,000.

But collectors wanting the best possible specimen are prepared to pay considerably more. This coin went to auction in February 2022. It sold for $9,600, including the buyer’s premium.

This is a coin with a fascinating history.

Only six examples of the Royal d’Or featuring a crown of thorns are known to exist. And for a century, they were celebrated as centerpieces of great coin collections.

But then that changed. Later experts said they believed the coins were fakes. And the debate rages to this day.

The whereabouts of only two of the six coins are now known. One resides in the National Library of France. This is the other – and it is the only one to have been graded by an independent assessor. The NGC graded it AU (“almost uncirculated”) 55.

The controversy over its origins certainly didn’t seem to dampen the enthusiasm of bidders. When the coin came to auction in June 2022, it sold for $60,000. 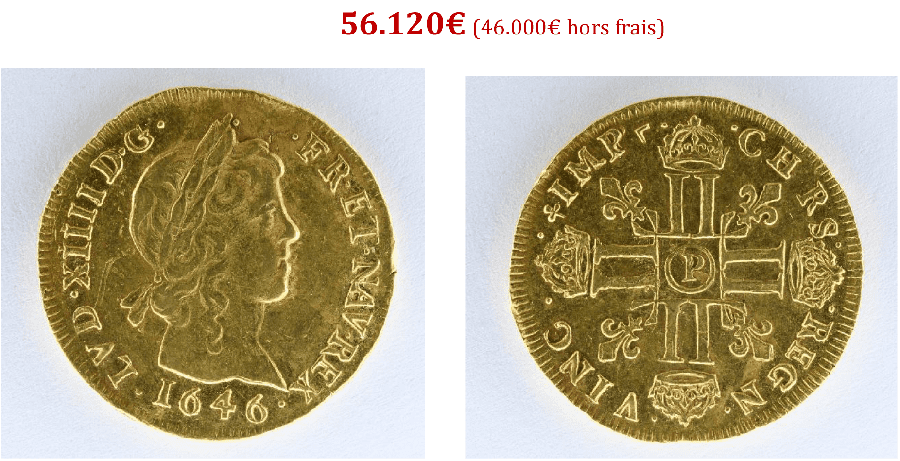 This coin is another with an amazing story.

In 2019, three stonemasons were employed to renovate an old farmhouse in the French town of Quimper. When they began work, they found an old metal box.

Inside were no fewer than 239 gold coins, all dating from before the French Revolution. They were probably the savings of a rich merchant or landowner.

The lucky family who owned the farmhouse kept four coins as souvenirs, and put the rest up for auction in 2021. 19 never made it to the sale room, having been snapped up beforehand by the Musée de la Monnaie in Paris.

But this one did go under the hammer in the town of Angers. It had been struck in 1646 and bore the portrait of King Louis XIV. And what was particularly unusual and interesting was that the portrait showed the King as a boy.

It was estimated to fetch around $15,000 – but the final price was over $56,000. The sale achieved over $1 million in total. It was good news for the stonemasons too: the proceeds were shared between them and the family. 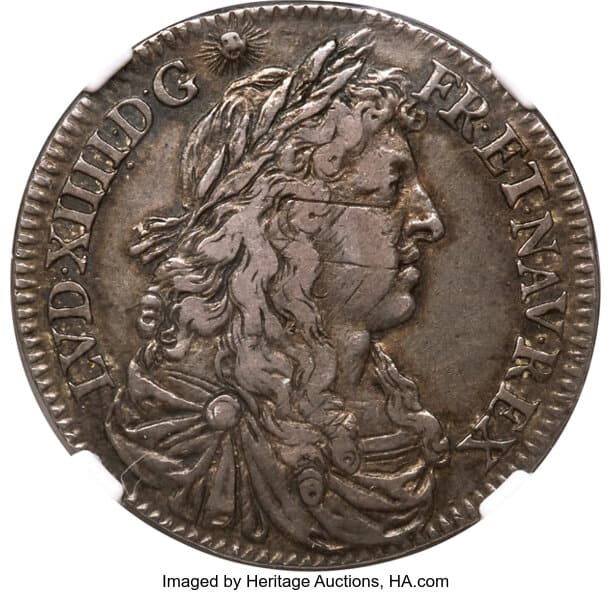 This coin was struck in the Paris Mint for use in France’s New World colonies. The 15-sol piece was first prescribed by ordinance of Louis XIV in 1670, probably for the West Indies.

Around 40,000 of the coins were minted, but they had a relatively small circulation. Most were subsequently melted down. The remaining examples were rare as the proverbial hen’s teeth. Even the National Collection in France did not own a specimen.

The grade of this one – XF (“extremely fine”) 45 – would usually not place a coin in the top rank of collectibles. But the rarity of the series meant it was highly desirable.

At the time of its auction in January 2022, no more than 17 examples at any grade were believed to exist. Of those, eight were in museums. And only one coin had been assessed as being finer – a specimen graded AU53 by the PCGS.

The winning bidder paid an eye-watering $132,000, including the buyer’s premium, to add it to their collection. 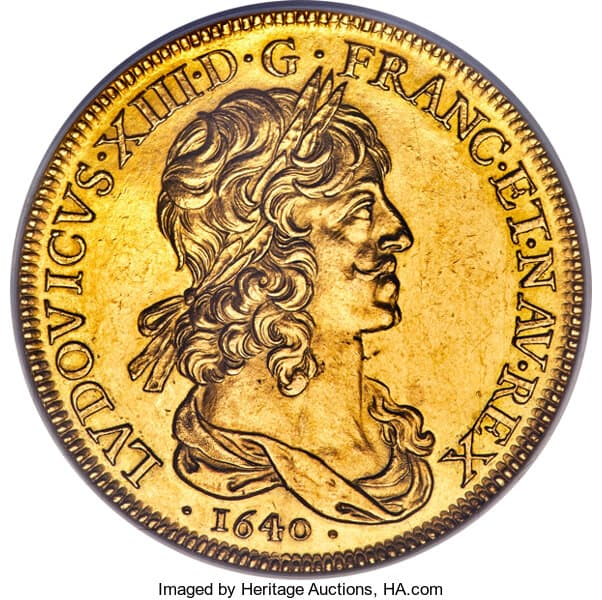 This remarkable coin is the largest denomination ever to have been struck in France. The 10 Louis d’Or measures 44 millimeters in diameter and weighs just under 67 grams.

A coin of this size and value was never intended for regular circulation. Instead it was probably used as a gambling chip.

Very few examples of 10 Louis are found today, and they all command staggering prices. This one was graded mint state 61 by the NGC. Look closely, and you’ll see a die crack which runs from the King’s shoulder to his cheek.

The Fascinating History of French Coins

That brings us to the end of our tour of the some of the most valuable French coins on the market. These beautiful objects are miniature works of art. But they also provide a fascinating insight into French history and culture.