Rob Paulsen Coin » 18 Most Valuable Franklin Half Dollars Worth Money

The US Mint produced Franklin half dollars from 1948 to 1963, when they were replaced by Kennedy’s half dollars, struck in memory and respect for the assassinated President. You can find two types of this coinage nowadays, specimens with and without Full Bell Lines.

The most valuable Franklin half dollars are those with the horizontal lines banding the Liberty Bell depicted on the reverse. As a rule, collectors use the FBL term only for uncirculated business-strike pieces since all proofs regularly exhibit Full Bell Lines. 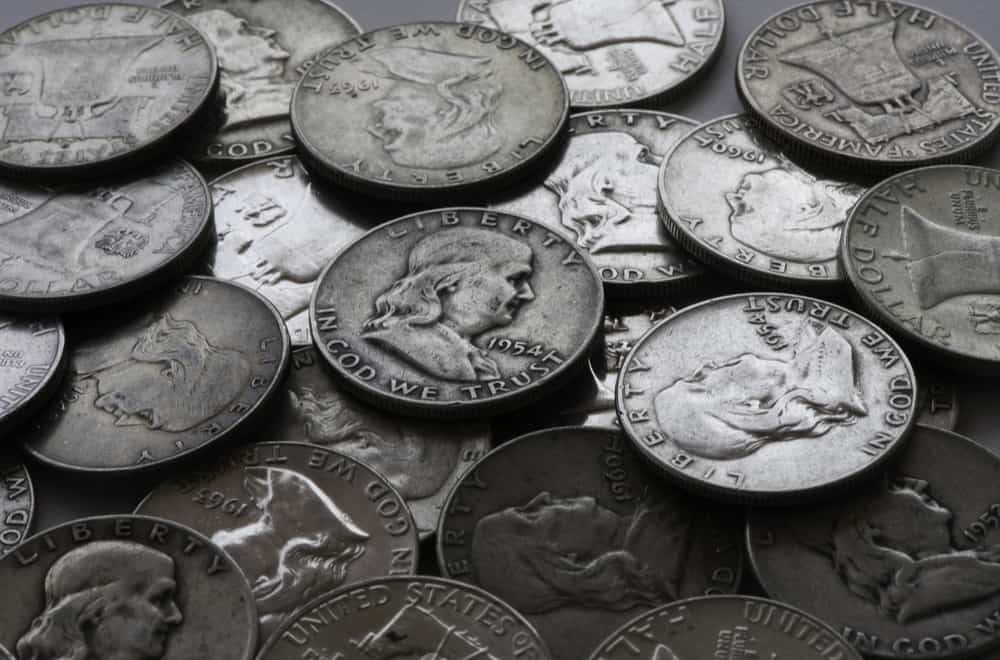 You can see Benjamin Franklin’s profile on the obverse with inscriptions LIBERTY and IN GOD WE TRUST along the rim. The date is struck on the right side.

The UNITED STATES OF AMERICA and HALF DOLLAR surround the Liberty Bell. The motto E PLURIBUS UNUM and small eagle are placed on the left and right sides.

Most Valuable Franklin Half Dollars

Almost all Franklin half dollars under extra fine conditions are worth $9.57, regardless of the minting year. Those in the mint state are more costly, and you should pay $40 to $610 for one. However, you can also find unique, rare, and error pieces that reach high prices at auctions. Let’s see. 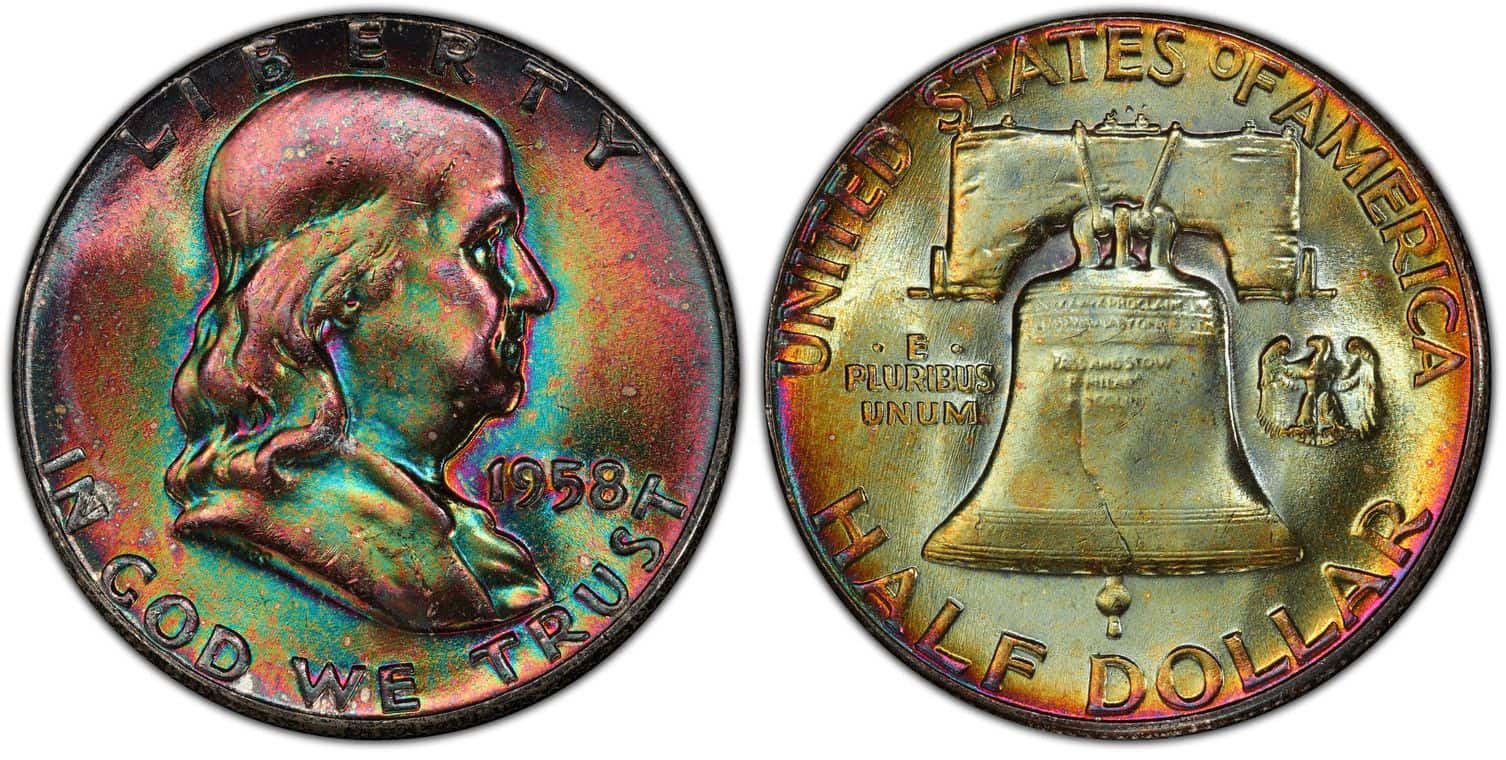 Most silver Franklin half dollars of 4,000,000 produced in the Philadelphia mint in 1958 are worth $9.33 to $46. Even though these coins are pretty common on the market, those with Full Bell Lines in the top grade of MS 67+ are precious.

The most expensive specimen is one of four certified this way. Its unique wild toning was so fantastic that one collector paid $129,250 for it at Legend Rare Coin Auctions in 2018. For comparison, you should know that a similar piece in MS 66 grade without FBL was paid a modest $1,680 at an auction. 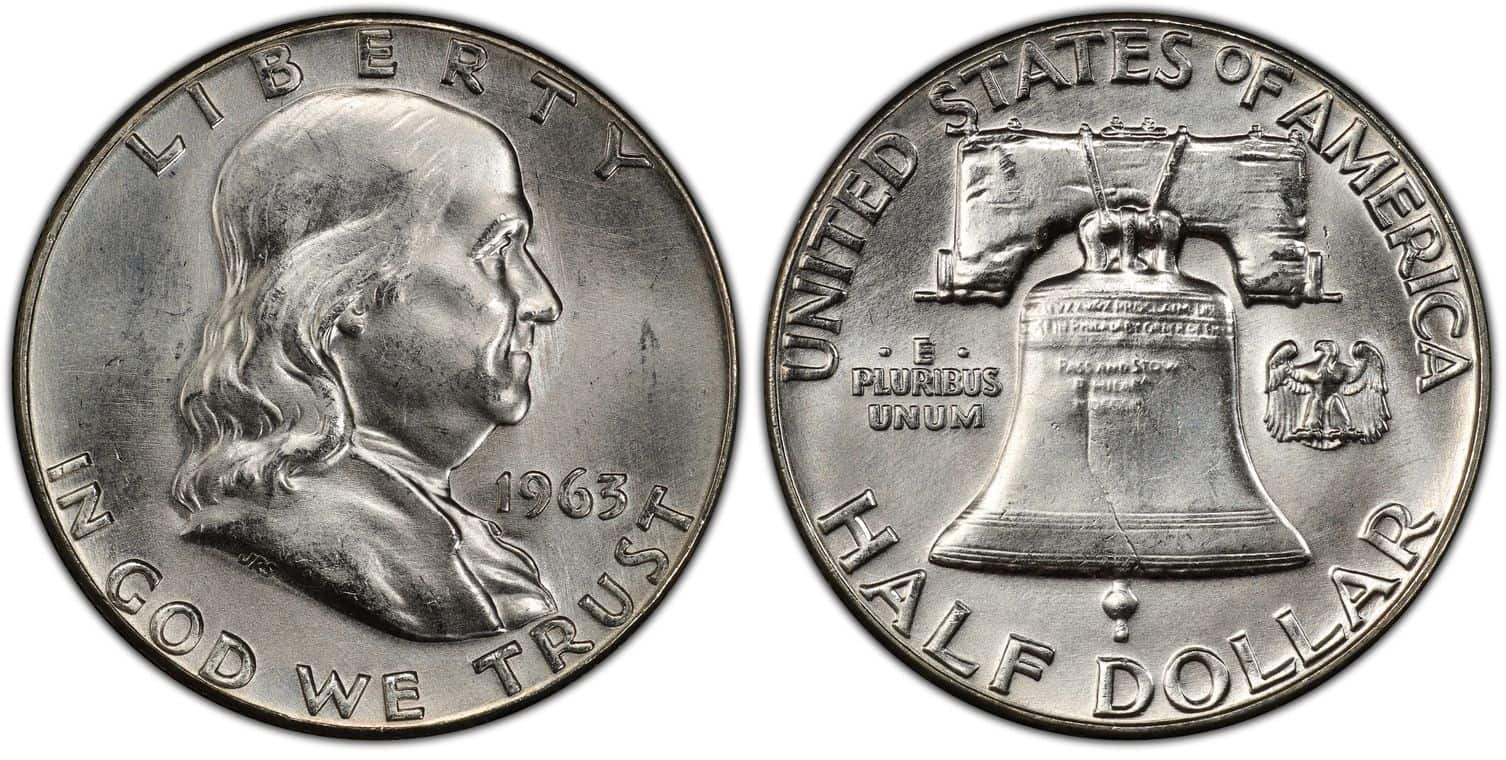 Most collectors believe that only spectacularly toned coins can reach high prices, but it is a beautiful exception. This brilliant specimen is untoned with fully defined Bell Lines, making it rare and highly graded. 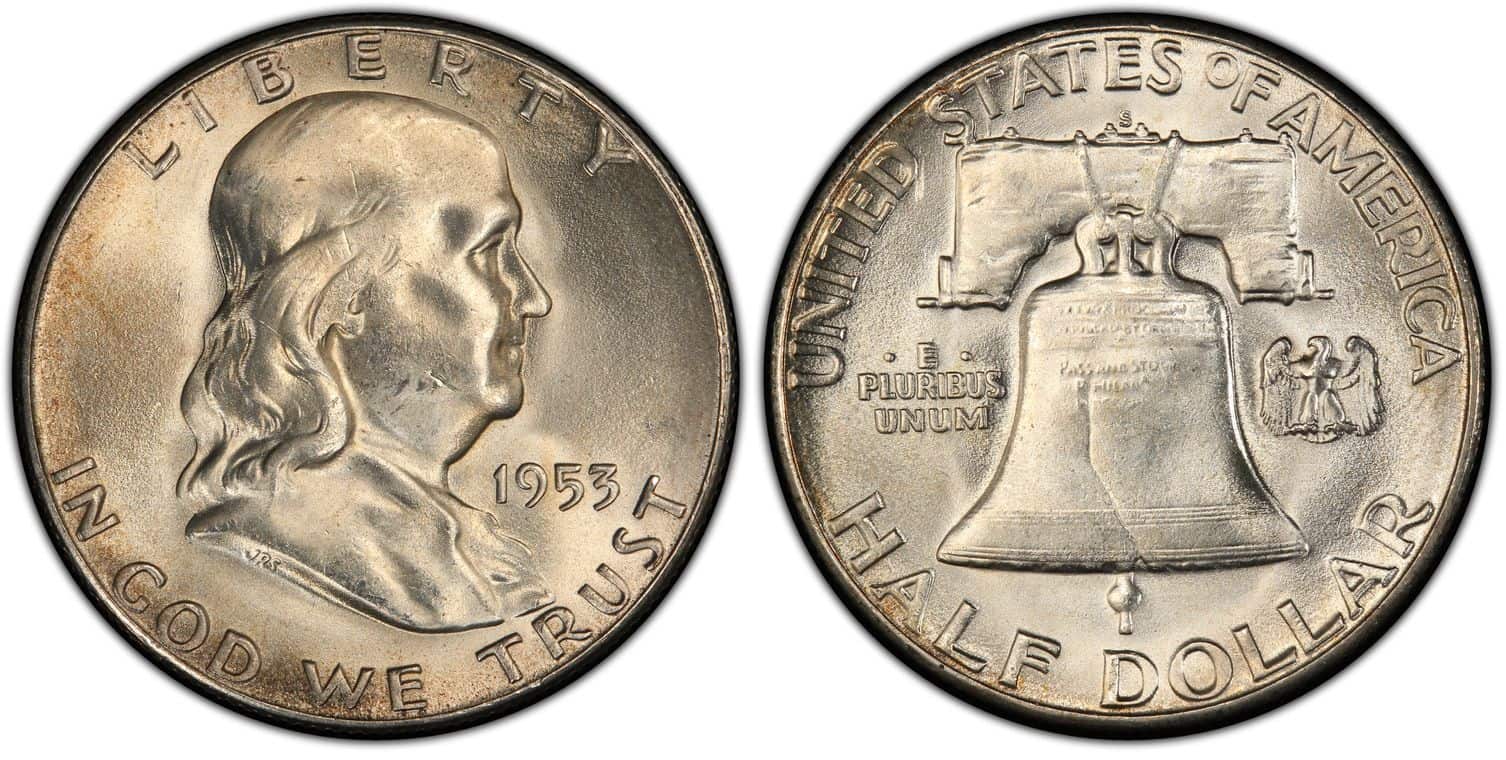 The San Francisco mint struck 4,148,000 Franklin half dollars in 1953, but only rare pieces are highly graded. This particular specimen rated with MS 66 FBL won an auction record when one collector paid an astonishing $69,000 for it at Bowers & Merena auction in 2001.

Most coins produced this year are known for their low quality and weak details on the Liberty Bell. However, this one is in a group of fifty existing Full Bell Line half dollars.

Interestingly, it is the weakest struck but still the most expensive piece in the series. Another MS 66 FBL coin and only one existing MS 67 FBL were paid less, showing how deceptive auctions can be. 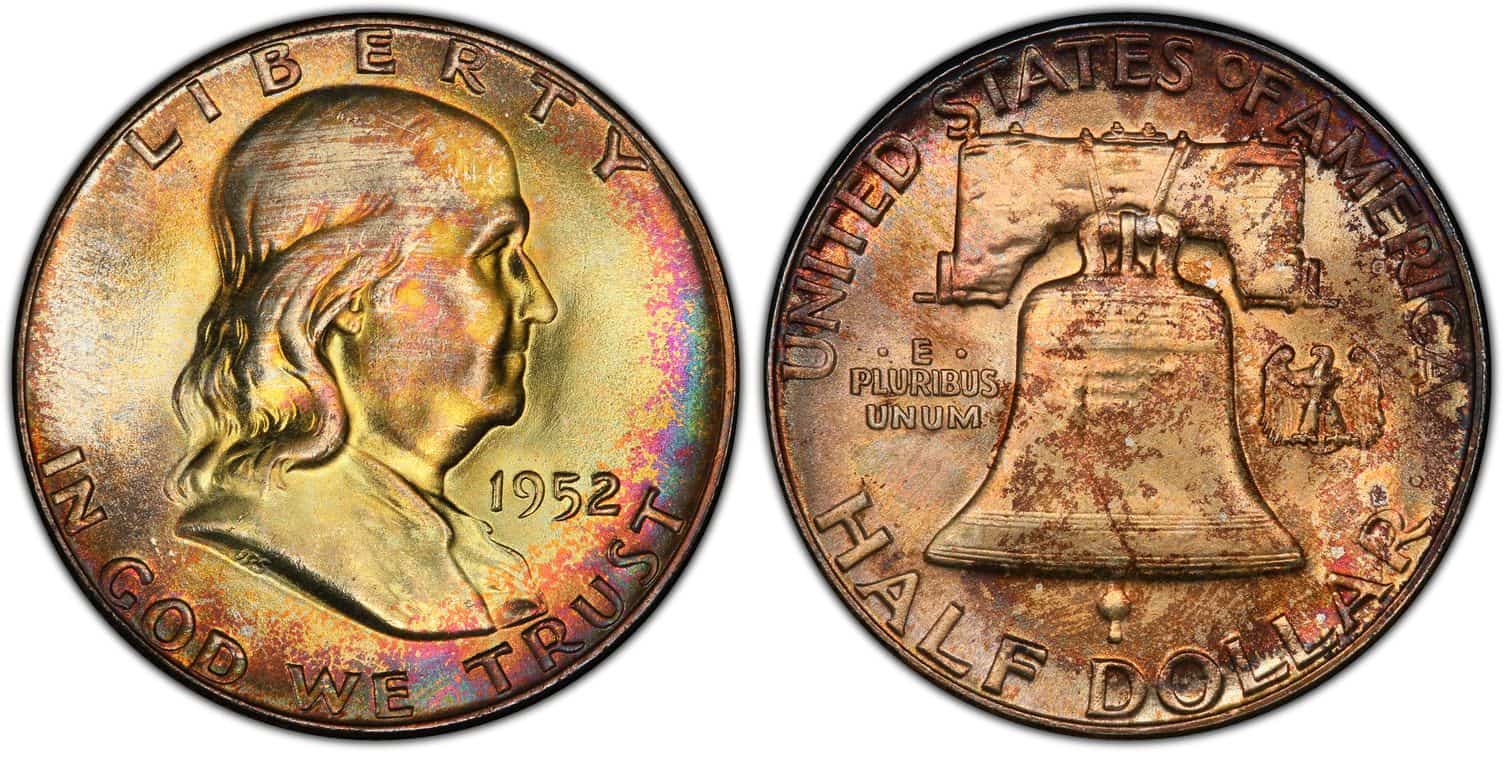 The 1952 MS 67+ FBL Franklin half-dollar is a rare coin minted in Philadelphia this particular year, worth more than the standard price of $9.34 to $74. One collector paid $42,300 for this specimen with unique and attractive color at Legend Rare Coin Auctions in 2019.

Its antique golden hue with hints of teal, magenta, and hot-pink tones over smooth surfaces makes this piece one in a kind, and worth every cent spent. This beautiful coin got a CAC certificate thanks to the exceptional strike and bold bell lines. 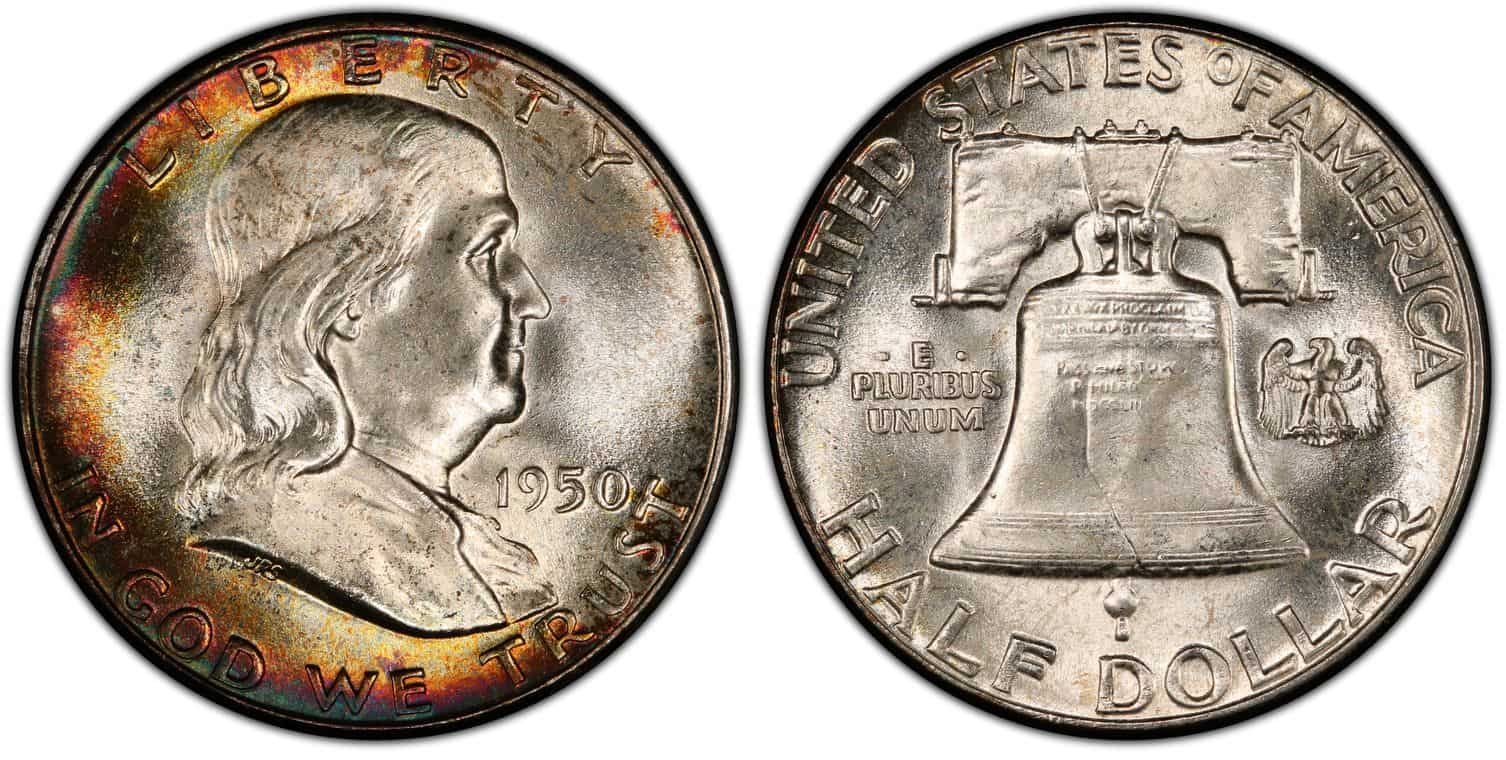 The extraordinary 1950 MS 67+ FBL Franklin half-dollar is the highest graded coin in the series. Therefore, one collector paid a fantastic $39,600 for it at an auction in 2018.

Other half dollars of 7,742,123 minted in Philadelphia in 1950 are typically worth about $9.34 to $122. However, this piece stood out from the crowd, thanks to its beautiful and smooth surfaces with vivid cobalt blue, pink, and orange-gold toning. 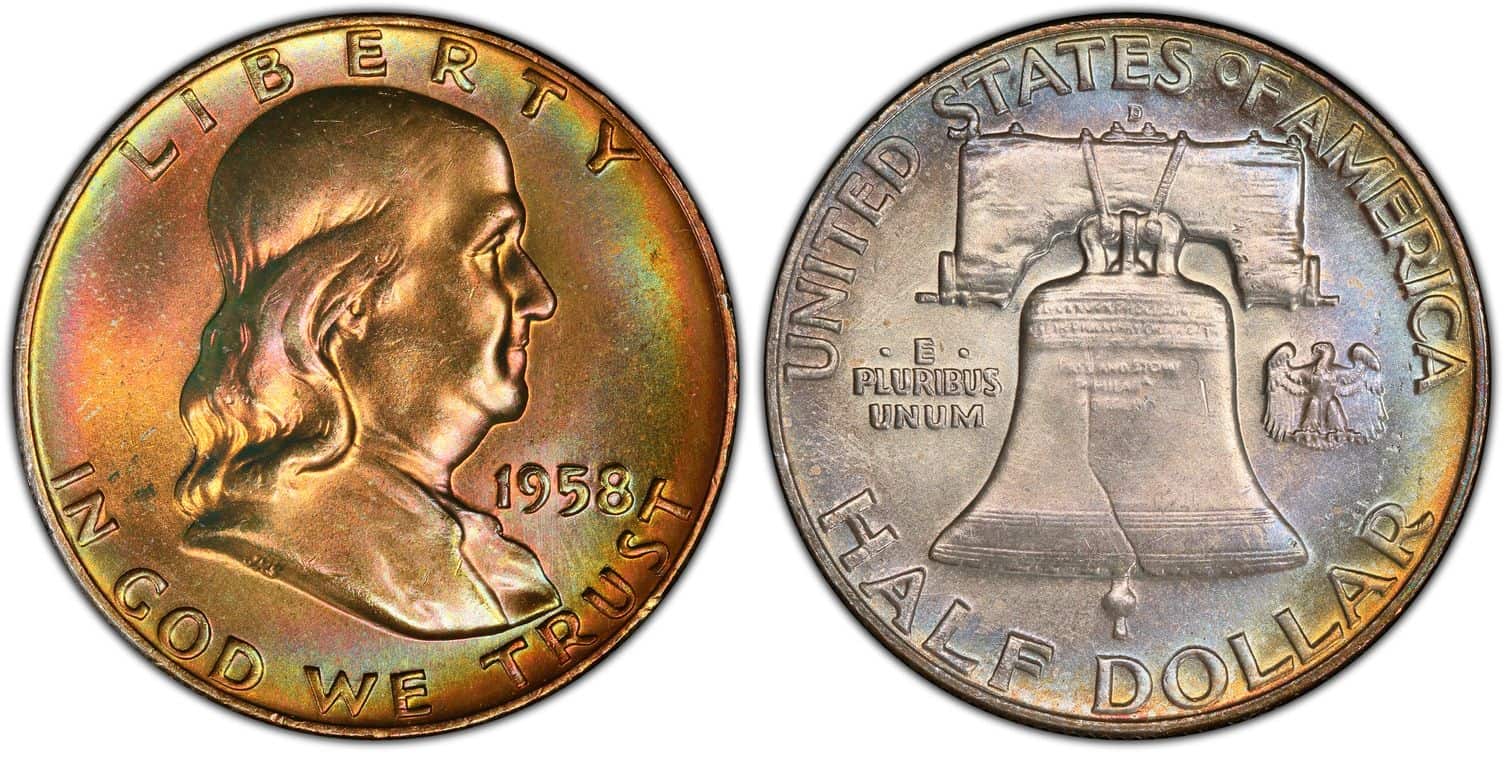 The final price depends on the condition, but even the poorest coins are worth something, thanks to the silver content. The most expensive half-dollar minted this year is the 1958 MS 67+ FBL Franklin half-dollar paid $32,900 at an auction in 2020. 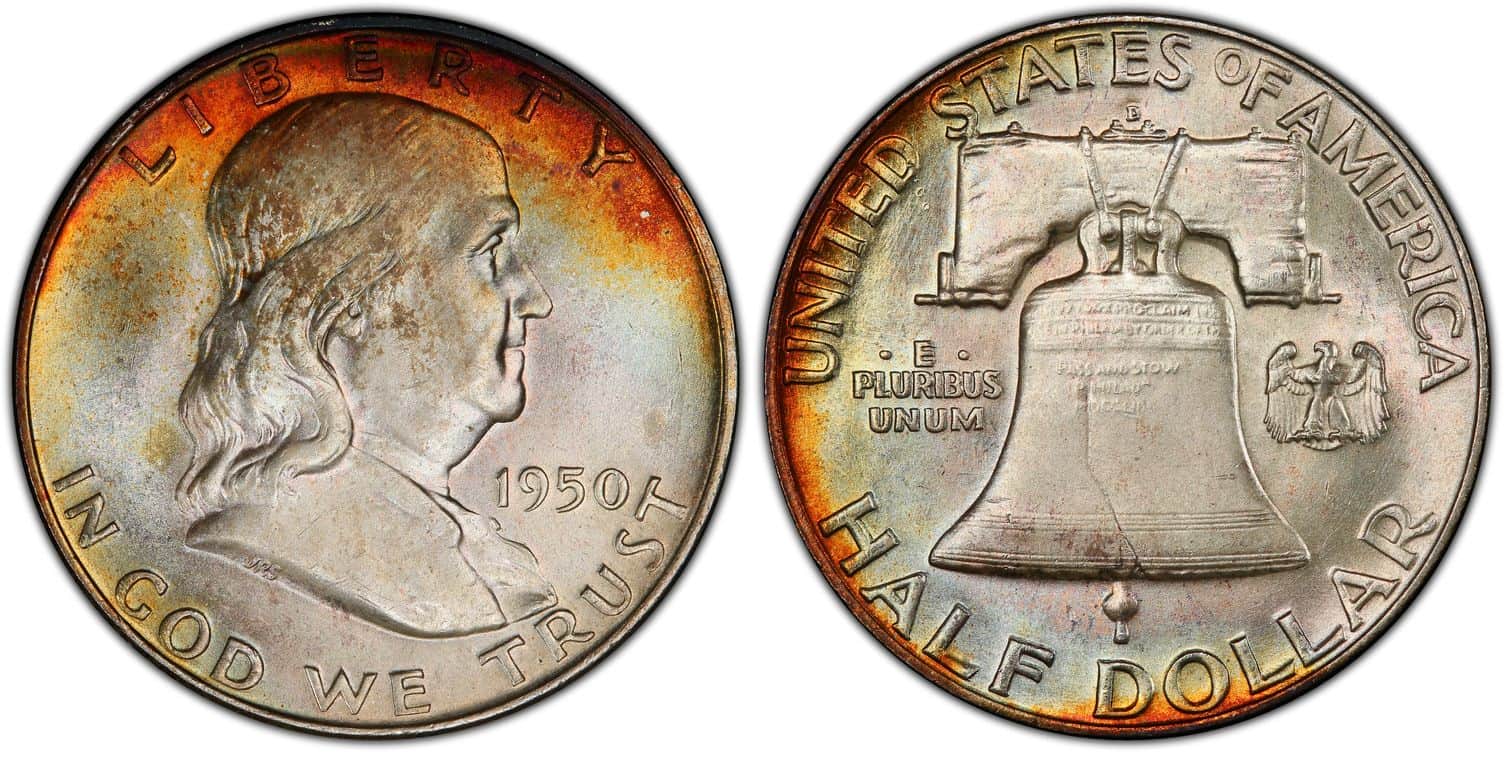 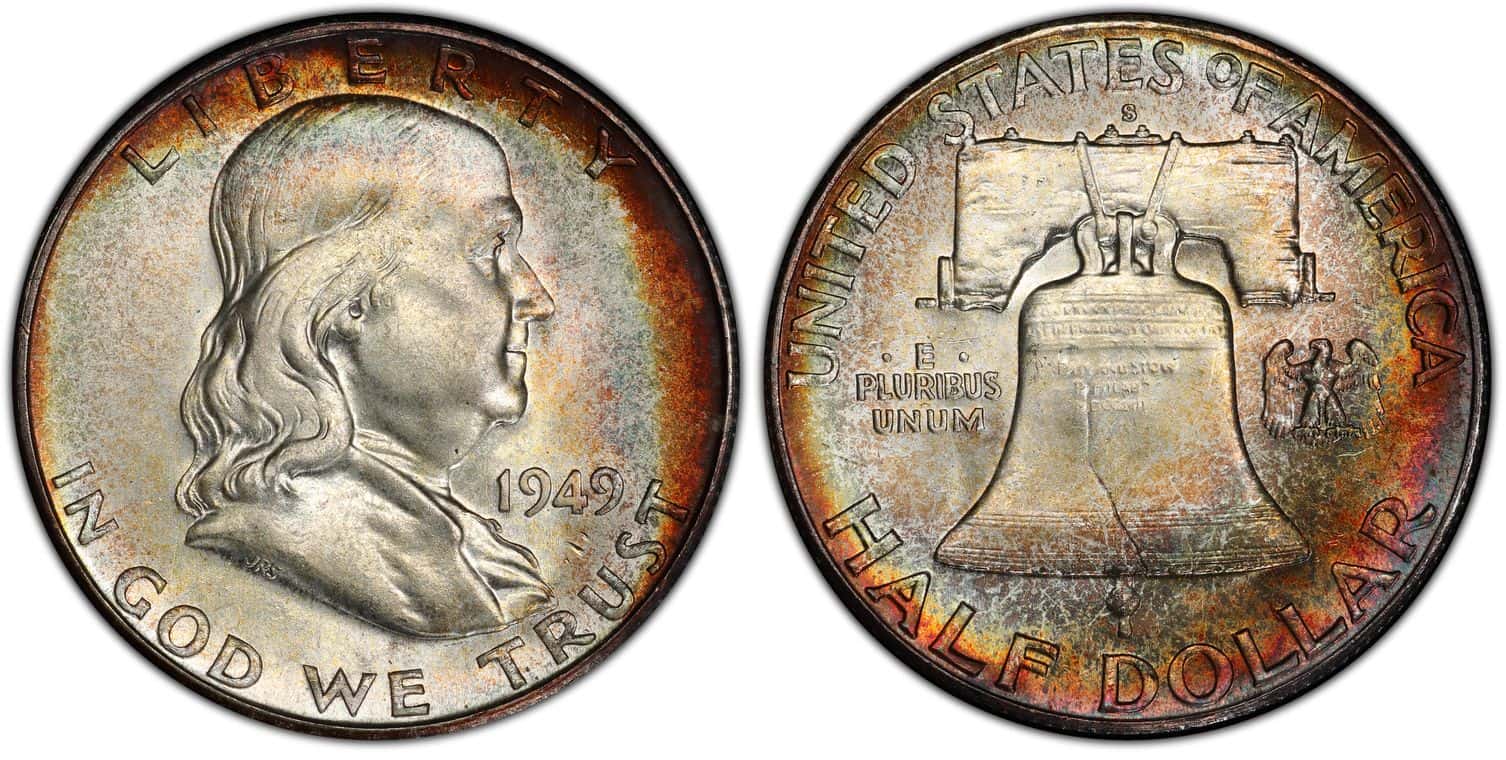 Since the San Francisco mint produced 3,744,000 silver Franklin half dollars in 1949, their price is expectedly moderate. You can buy most pieces for $9.34 to $161, but those with Full Bell Lines are pricier. For instance, the auction winner reached an astonishing $31,725. This coin in MS 67+ FBL grade was sold at Legend Rare Coin Auctions in 2018. 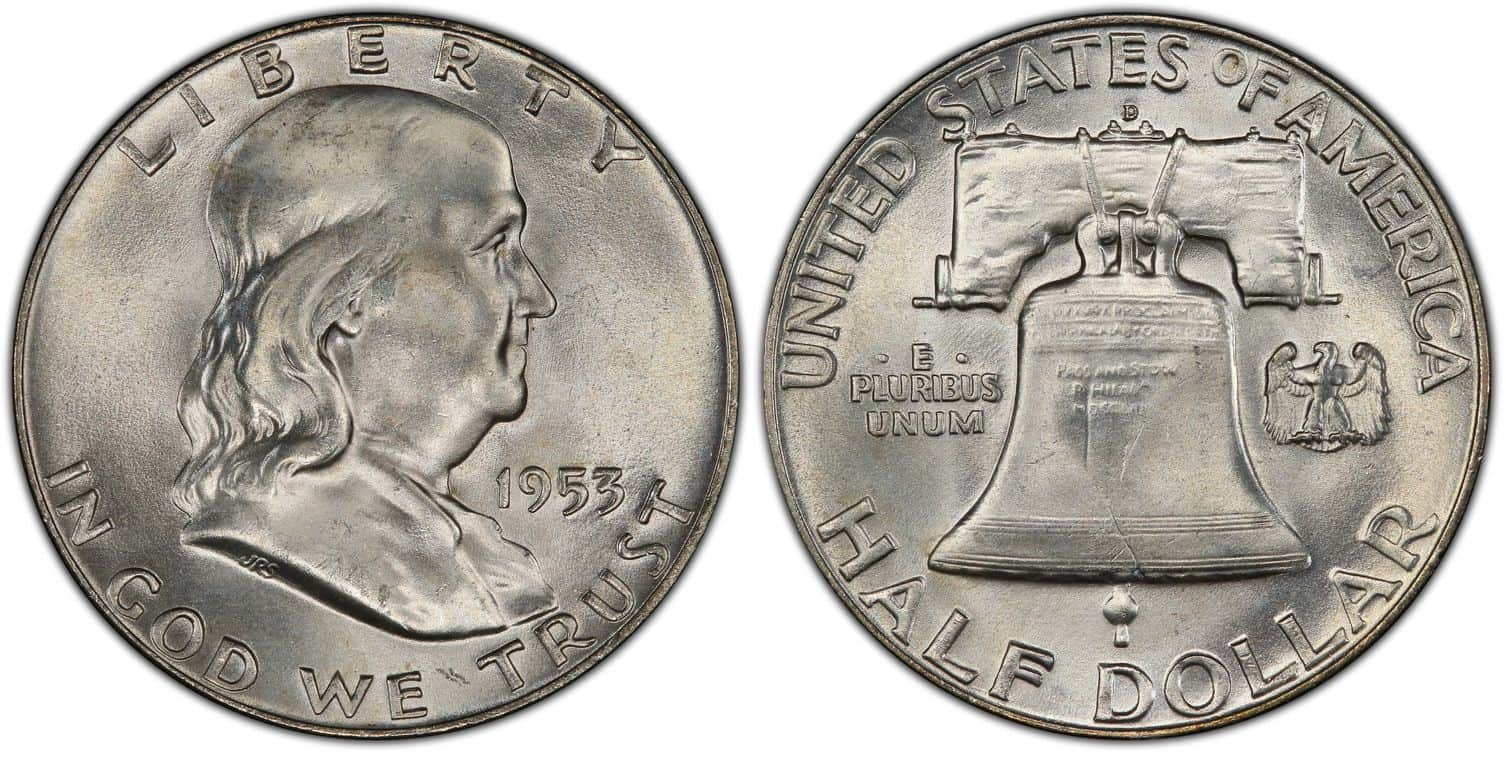 However, this unique, highly certified specimen reached $30,550 at Goldberg Auctioneers in 2914, thanks to its timeless beauty. 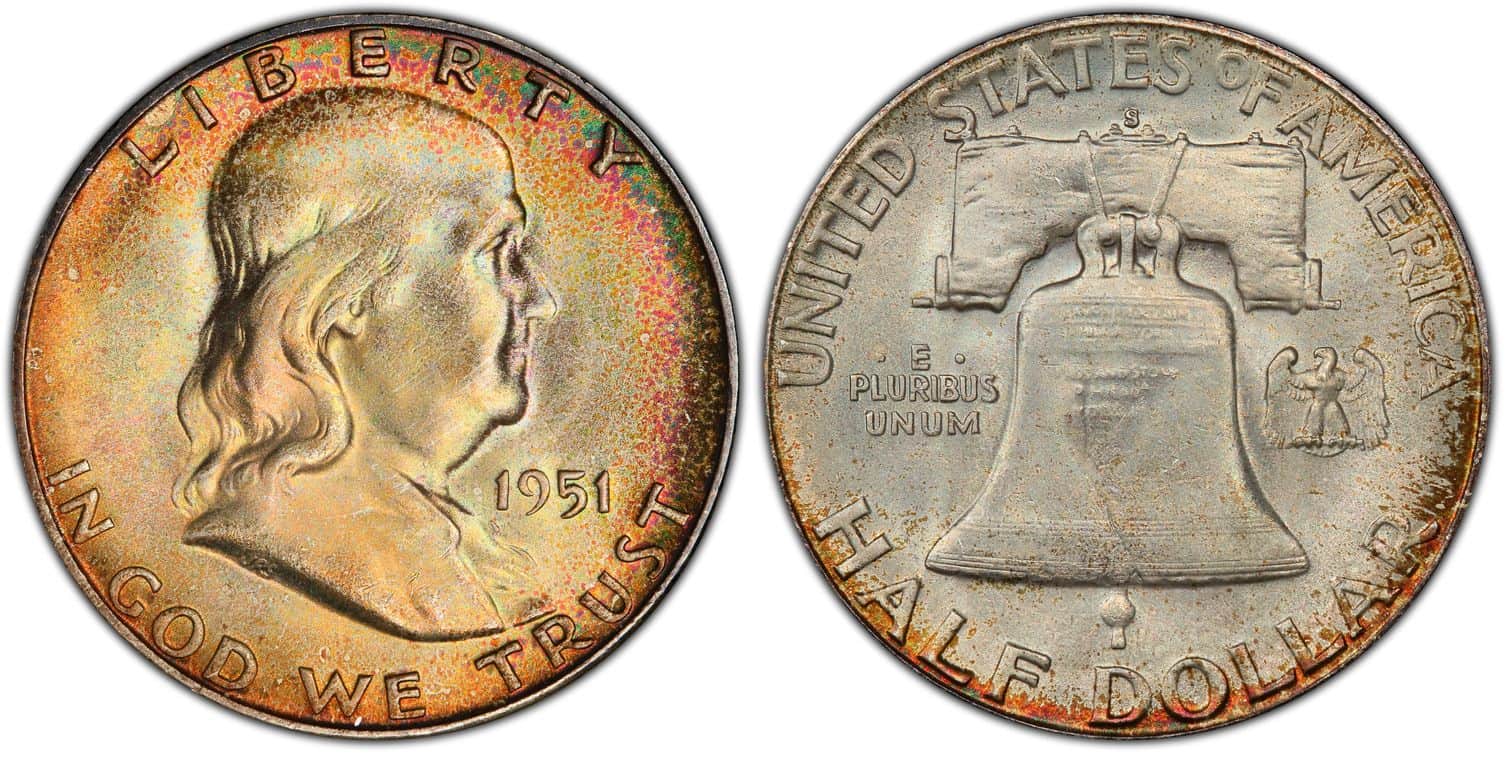 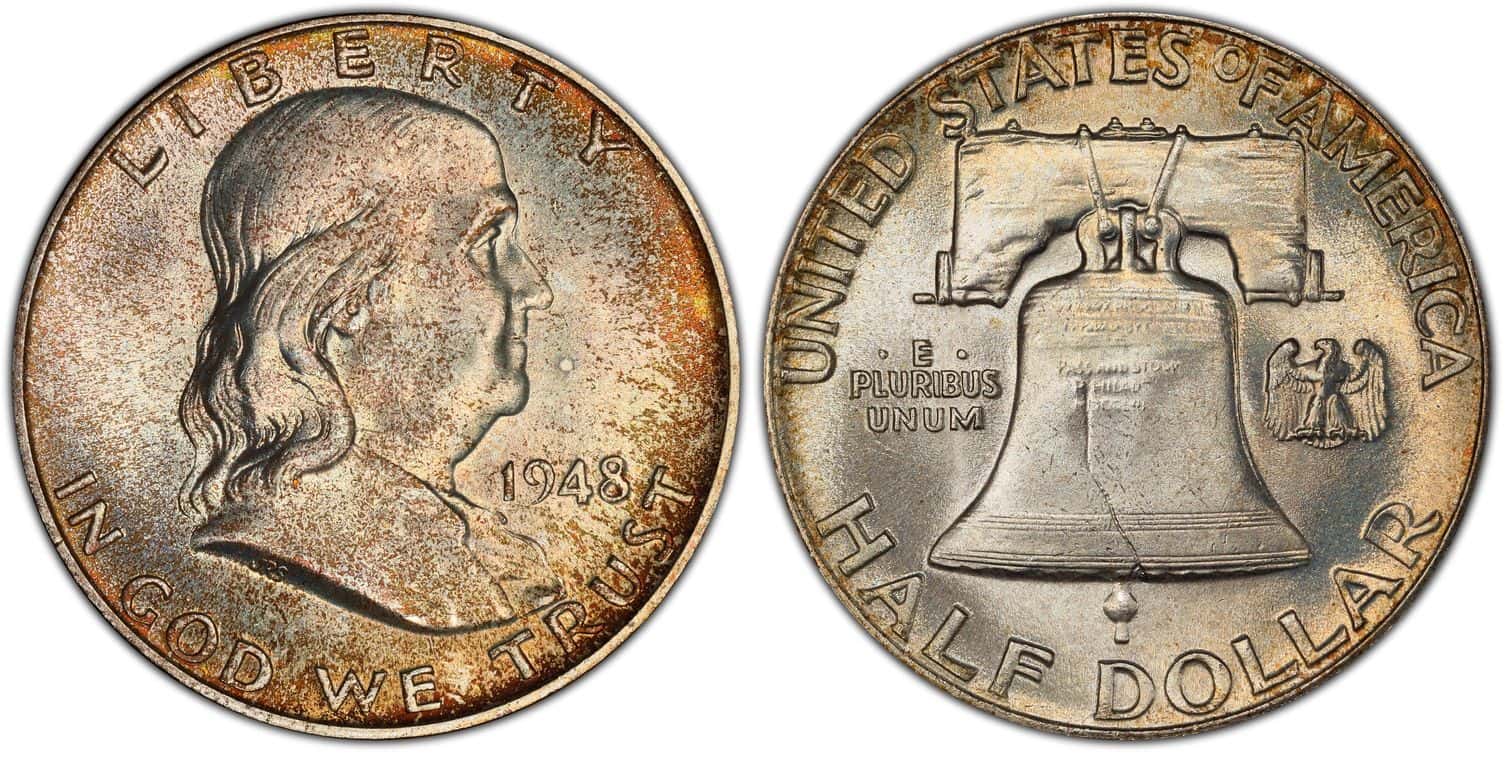 The silver Franklin half-dollar minting started in 1948, and the Philadelphia mint produced 3,006,814 pieces that year. It was the first American coin featuring a real person who was not a President on the obverse. 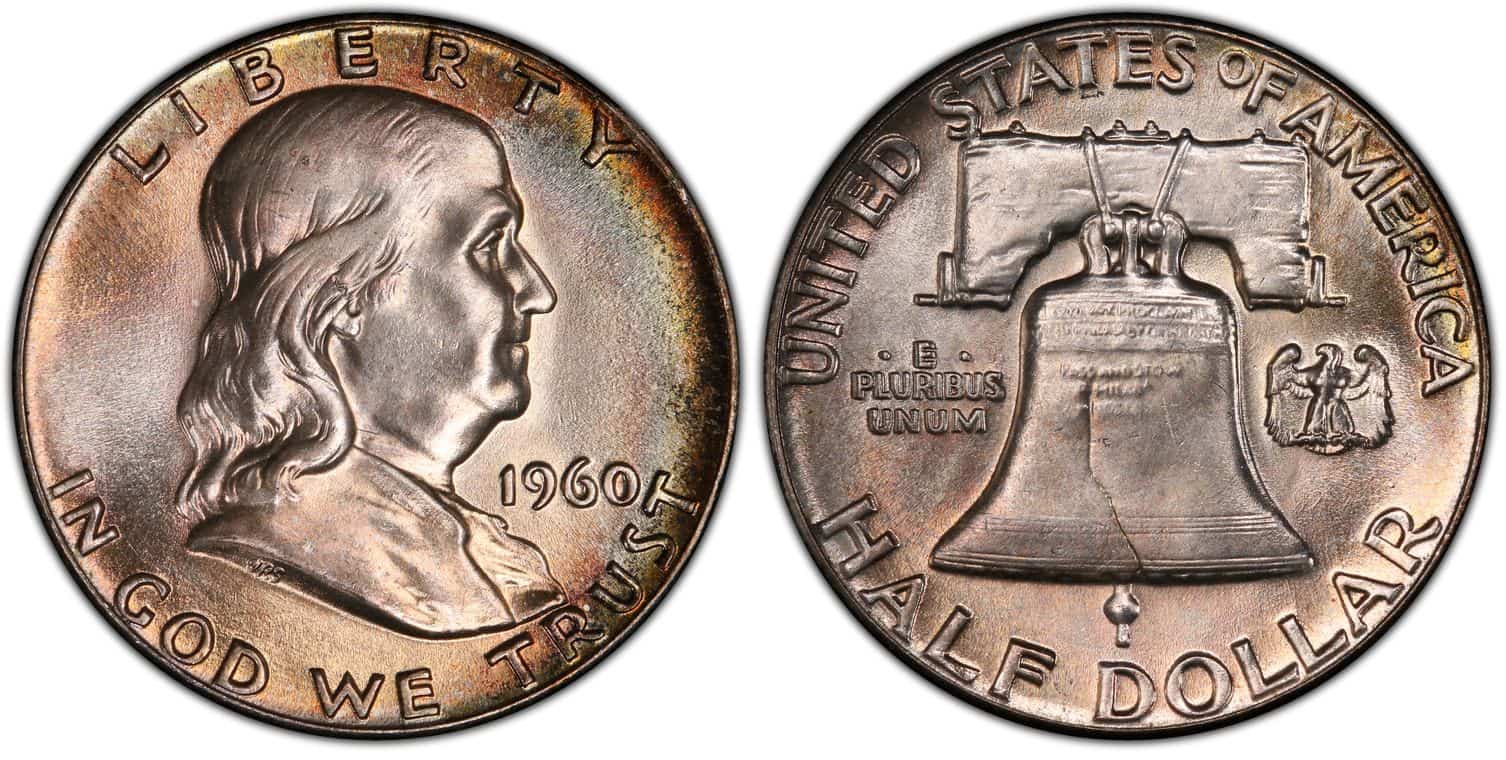 Most of the 1960 Franklin half dollars minted in Philadelphia are worth $9.35 to $113 on the market. They are different from previous mintages because the US Mint changed design quality, particularly visible on Ben’s more delicate hairlines.

Unlike most surviving coins of 6,024,000 minted, some better-quality ones can reach $4,500 on the open market. However, only this rare half dollar in MS 67 FBL is worth $28,200. One collector set aside such a sum of money for this beautiful piece at Heritage Auctions in 2016. 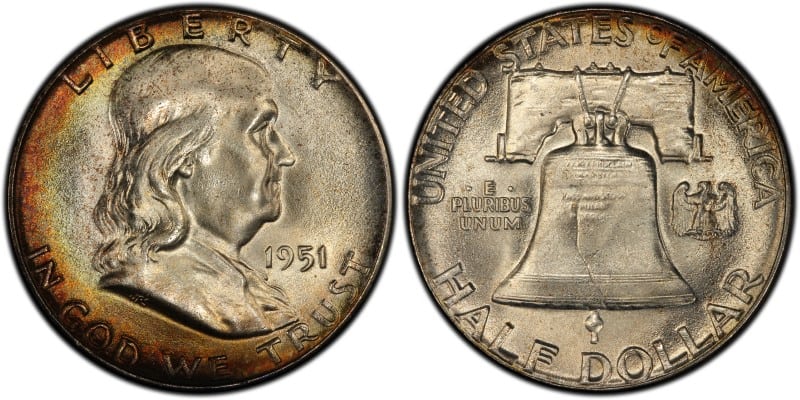 However, this vividly toned coin won the auction record in 2019, when one collector paid $26,400 for it at an auction. Experts estimate that there are seven similar pieces worldwide, but only one is MS 67+ FBL, making it extremely rare. 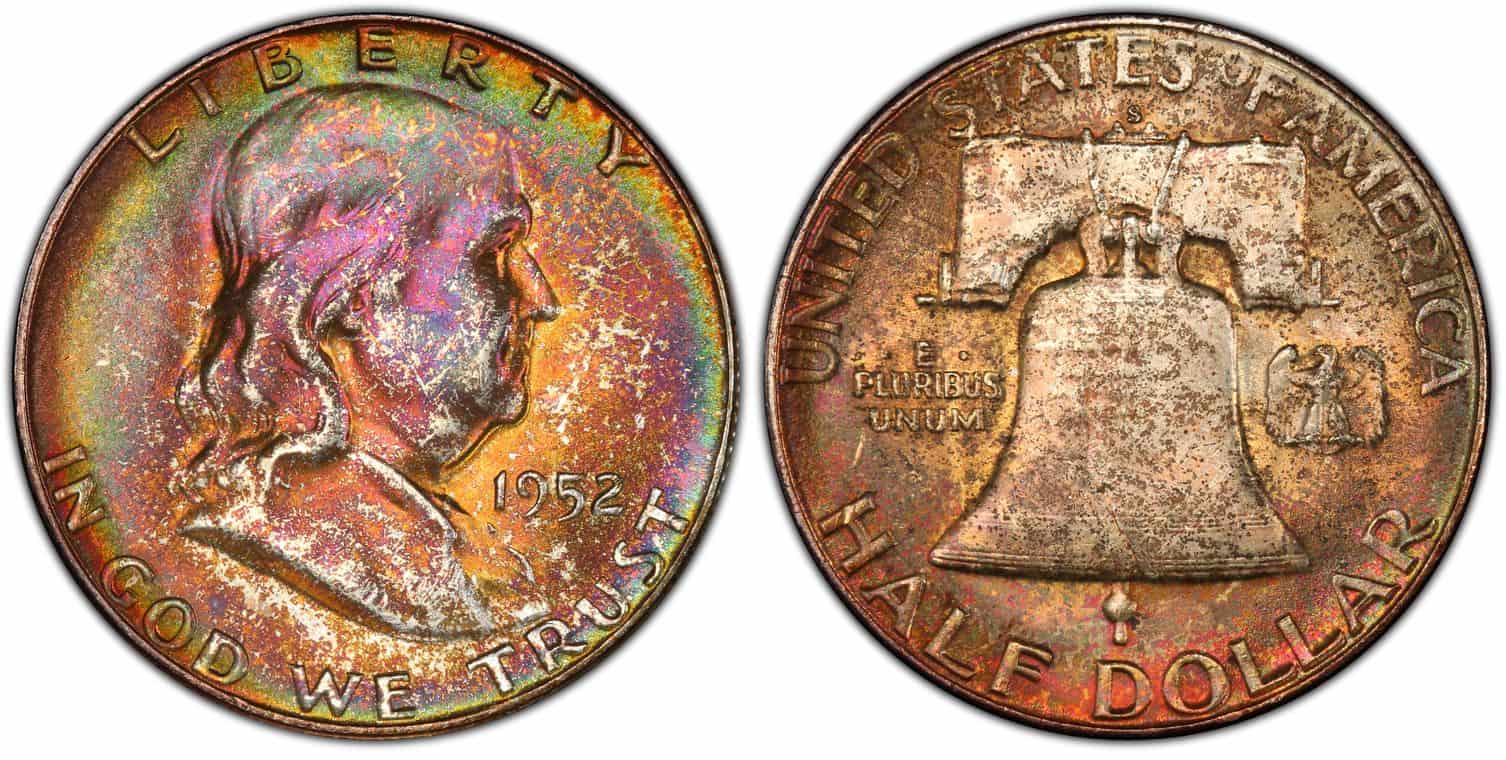 These coins are common in grades under MS 66 because they were often poorly struck on heavily worn dies. On the other hand, high-quality specimens are rare, so it is not surprising that one collector paid $25,850 for one piece rated MS 67 in 2014. 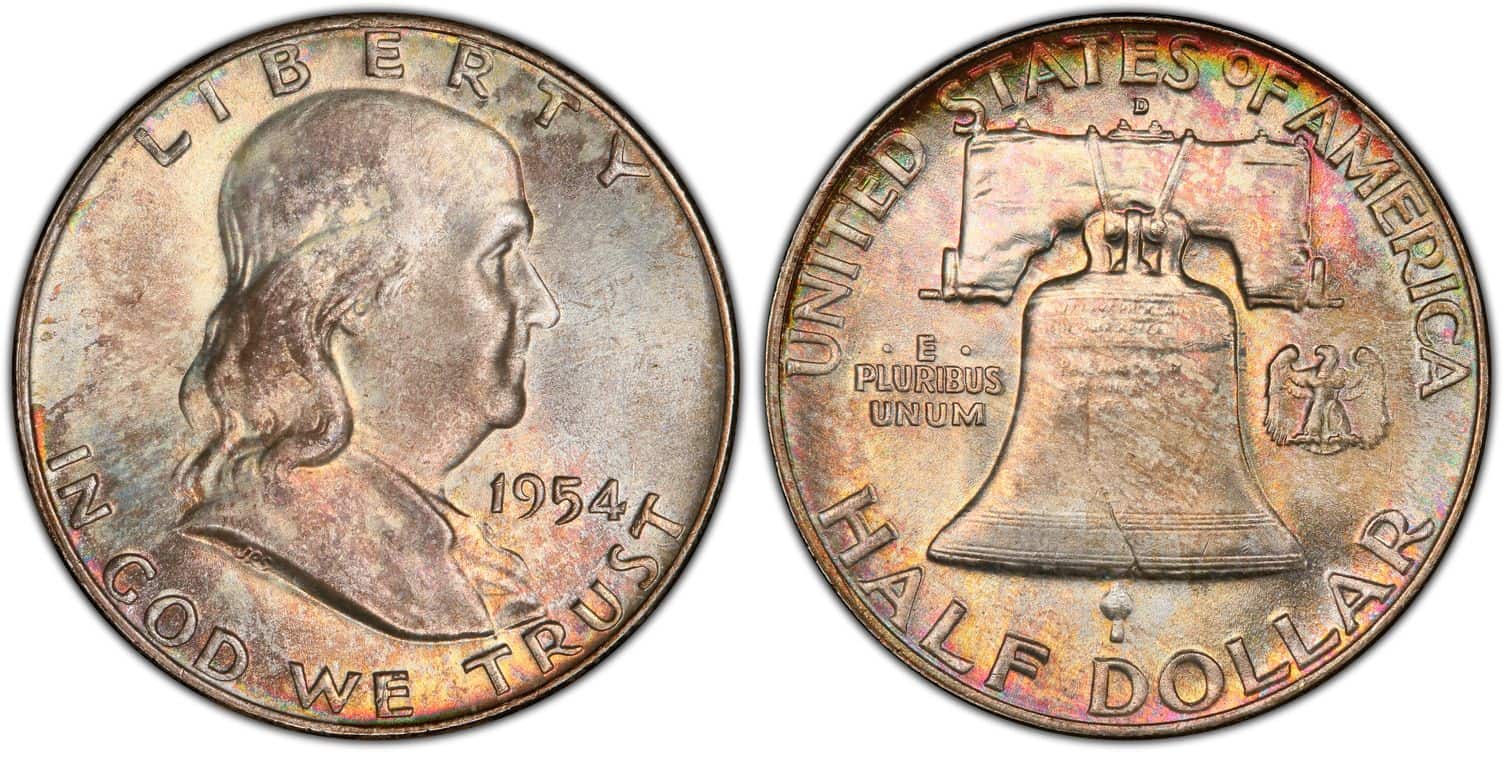 One stunning 1954 MS 67 Franklin half-dollar produced in Denver reached $21,275 at Heritage Auctions in 2002. The reason was its high grade, astonishing beauty, and soft pink toning. 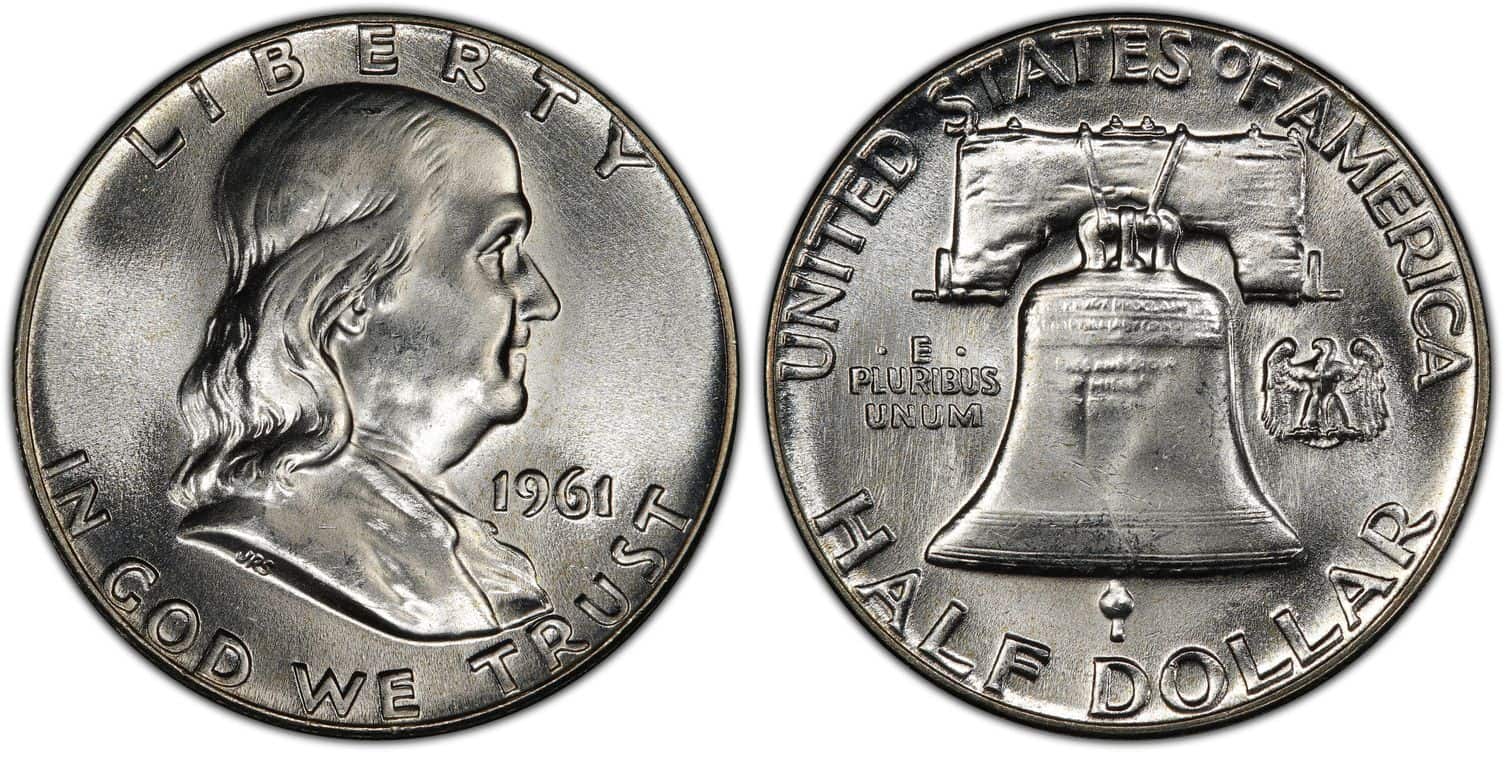 The Philadelphia mint produced 8,290,000 silver Franklin half dollars in 1961. Each piece is worth at least its weight in silver, despite its condition. Those in better grades typically cost $9.35 to $77, but those in pristine condition can reach about $1,150 on the open market.

Coins rated MS 65 can sell for approximately $100, while rare, well-preserved Doubled Die proof errors in the same grade are valued at $3,500. The most expensive specimen in the series is the one with Full Bell Lines in MS 66+, sold for $18,000 at Heritage Auctions in 2019. 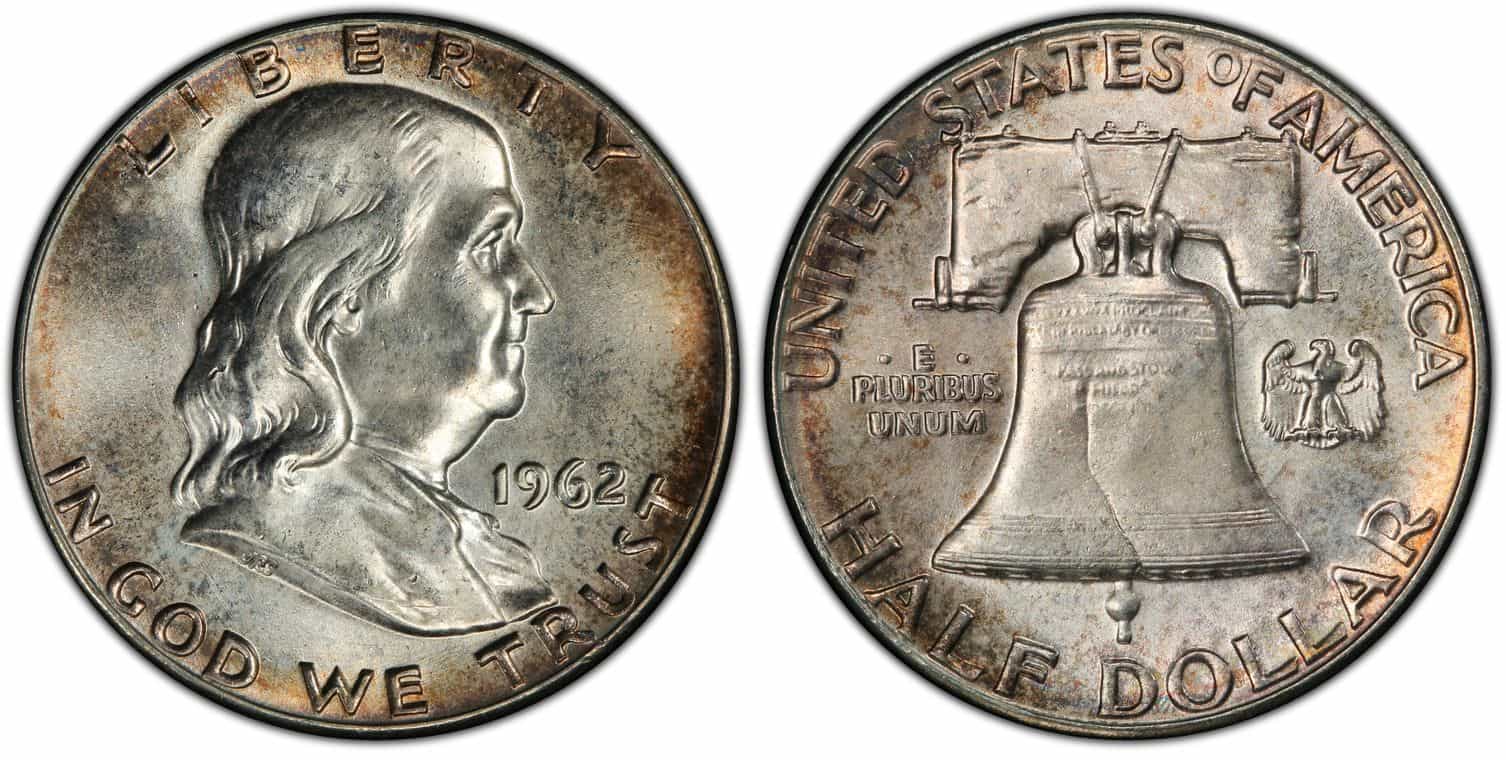 Franklin half dollars minted in Philadelphia in 1962 are not rare thanks to the mintage of an impressive 9,714,000. You can expect to pay $9.35 to $96 for a piece, depending on the preservation level.

However, the 1962 MS 66 FBL Franklin half-dollar is a real gem and is considered one of the rarest specimens in all series produced in the 1960s. In 2004, one collector bought it at Heritage Auctions for $17,825. 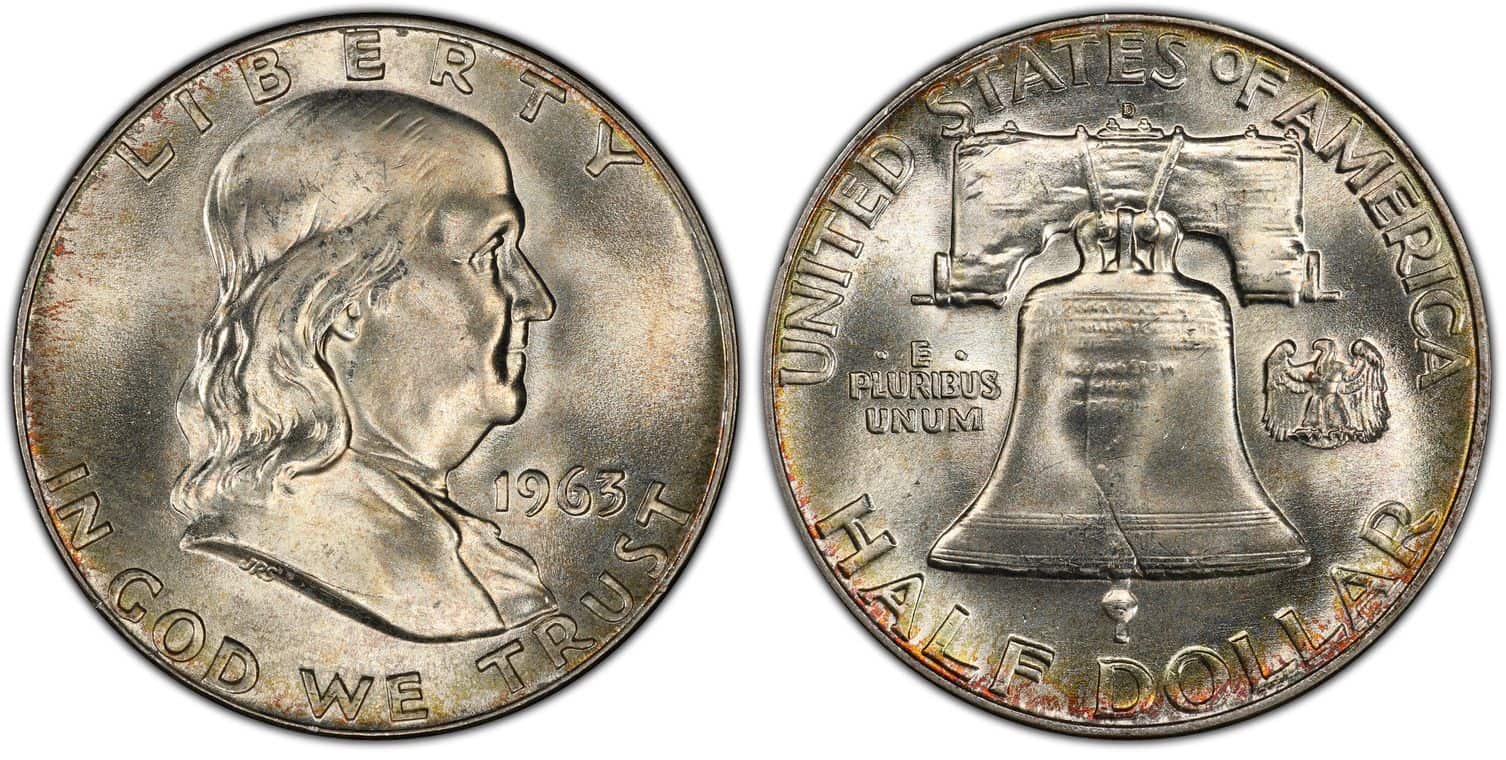 In 1963, the Denver mint set a new record for half-dollar mintage after minting 67,069,292 Franklin half dollars. It was the last year this coin was produced before the US Mint replaced it with Kennedy half-dollars in honor of the assassinated President.

Most Franklin half dollars are worth only a few dollars nowadays, but sometimes you can get more on the open market. On the other hand, rare specimens with Full Bell Lines can reach high prices at auctions. It is crucial to differentiate FBL coins from non-FBL ones before looking for their costs.