A challenge coin is a small medallion or token used to signify membership of an organisation. They’re often found in the military, where they’re sometimes used to reward outstanding performance. And some of them are worth a lot of money to collectors.

So how do you know whether a challenge coin is just an interesting trinket or a serious investment piece? That’s what we’re here to find out.

We’re going to look at the most valuable challenge coins to have come to the market in recent years. And we’ll find out what made them special – as well as how much they sold for!

Ready? Step this way to find out more.

1. Speaker of the House of Representatives, Nancy Pelosi 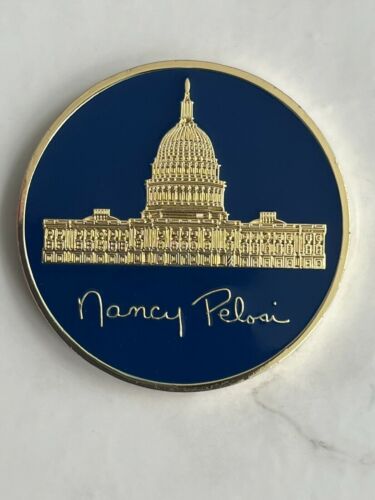 One of the rarest types of challenge coins are those awarded by senior politicians. They are usually given to close aides, and it’s relatively unusual for them to find their way onto the collector’s market.

This challenge coin from Speaker of the House of Representatives, Nancy Pelosi, came to the market via online auction website eBay in 2022. Ms Pelosi is a high profile Democrat, who has represented the state of California since 1987. She made history as the first ever female Speaker.

This challenge coin features her signature beneath an engraving of the House of Representatives. It was purchased at auction with a single bid of $7,500.

Interestingly, another political challenge coin was offered for sale on eBay at around the same time.

A photograph of Donald and Melania Trump, framed alongside two challenge coins from the 45th US President, was offered with a starting price of $7,900. The auction closed without it attracting any bids. 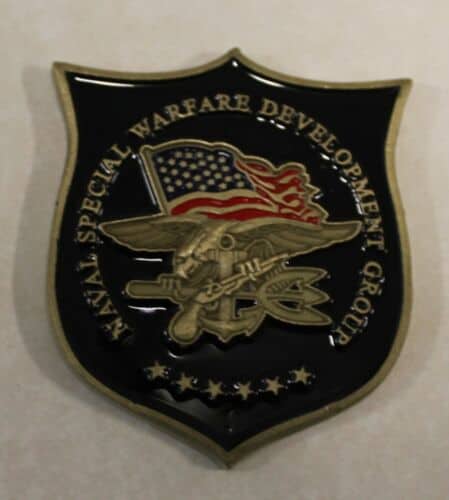 The Group is the Navy’s contribution to the Joint Special Operations Command. It is focused on counterterrorism. And its activities are shrouded in secrecy, giving it a certain cachet for militaria enthusiasts.

The coin marks membership of DEVGRU’s Gold Squadron. It depicts a gilt eagle atop an anchor, a rifle and a trident clutched (somewhat improbably) in its talons. The ground is black enamel. 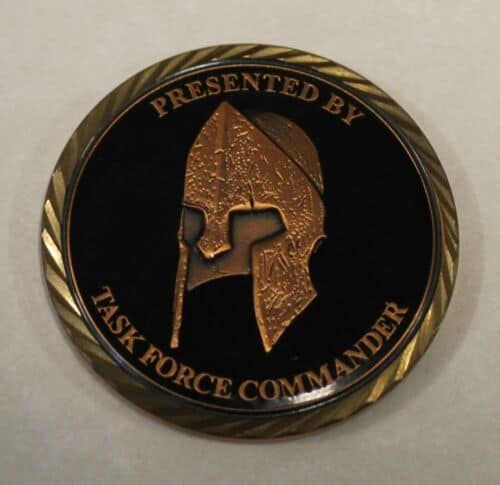 This challenge coin from DEVGRU looks more like a traditional token. It’s circular, with a black ground and gilt details.

One side bears the illustration of a Roman centurion’s helmet, with the legend “Presented by Task Force Commander”. It was presumably bestowed on the recipient in recognition of some particular deed of heroism.

The other side shows a sword and shield, with the words “The deed is all … not the glory”. That’s a motto that may have proved a comfort to those involved in special operations that would remain state secrets.

The coin was offered for sale on auction site eBay in September 2022. It was purchased for a fixed price of $3,250. 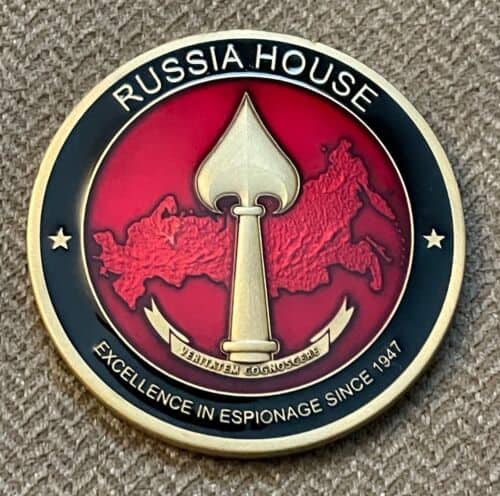 The Central Intelligence Agency, or CIA, is perhaps the best known of all US intelligence units. This challenge coin somewhat surprisingly celebrates its covert work.

One side bears the words “Russia House”, the Agency’s program to spy on Russia. It was the same name given to the division of Britain’s Secret Intelligence Service tasked with the same objectives. And it was famously the title of a 1989 spy novel by John Le Carré.

On the same side of the coin, at the bottom, is inscribed “Excellence in espionage since 1947”. On the reverse is written “Europe & Eurasia Mission Centre”. That makes this a Type II challenge coin. Type I versions were produced when the program was part of the CIA’s Central Eurasia division.

It was offered for sale via eBay in 2022, with a fixed price of just under $3,000. In the event, the seller was prepared to accept a lower offer. 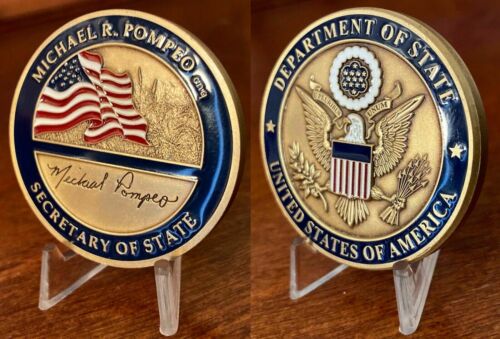 This political challenge coin would have been presented to its recipient by Republican politician Mike Pompeo. He served as Director of the CIA under Donald Trump, and subsequently became the 70th holder of the office of Secretary of State.

His tenure was marked by incident. He supported the 45th President’s unlawful efforts to pressurize Ukraine for political favors. He used State Department staff to run errands for himself and his wife. And he attempted to obstruct the peaceful transfer of power from Trump to President Joe Biden.

The recipient of this particular coin is unknown. It measures 1.75 inches in diameter, and would purportedly have been passed to its new owner via a handshake.

One side bears an image of the Stars and Stripes with Pompeo’s signature beneath. The other depicts an eagle with outstretched wings. 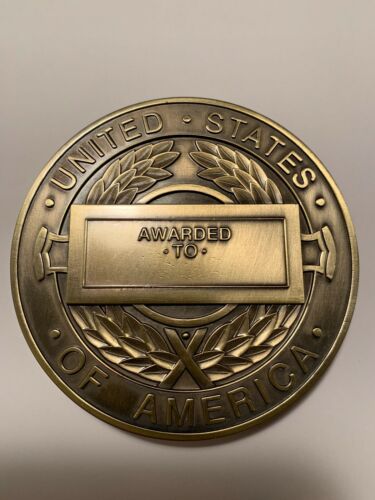 As we’ve seen, challenge coins from the intelligence services are highly sought after. And so it is with this example, a career commendation medal from the American CIA.

Cast in bronze, one side shows an eagle with the words “Central Intelligence Agency” and “Career Commendation Medal”.

The other has a laurel wreath surrounded by the words “United States of America”. In the middle is a box with the words “Awarded to”. The space for the recipient’s name remains blank.

The medals were awarded for performance which went above and beyond normal duties, and which helped advance the Agency’s mission. They were hefty items – this one measures 3 inches across and is a quarter of an inch thick.

It was offered in good condition in September 2022 for $2,500, with the seller accepting a lower offer. 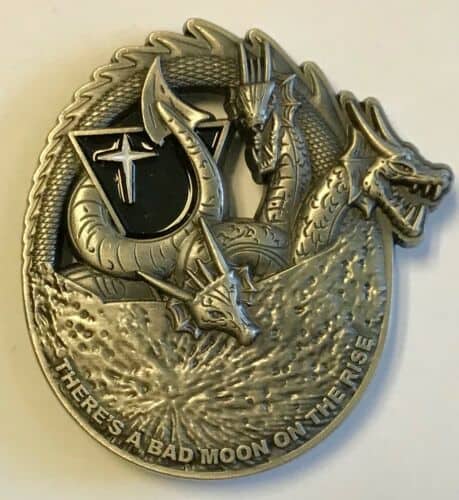 This mysterious token was sold on eBay in 2022. It purported to be connected to Area 51, alleged site of an alien spaceship crash landing, There were also hints of connections to the CIA Special Operations Group, and Air Force Special Projects.

The seller provided little in the way of further information, aside from a physical description of the token.

One side bore the words “There’s a bad moon on the rise”. The other carried the Latin inscriptions “Fortitudo et preparatio”, meaning “Strength and preparation” and “Facta non verba”, meaning “Deeds not words”.

Both sides carried the image of three snarling dragons in high relief. These were accompanied by an inverted triangle containing a four-pointed star.

At least one buyer appeared convinced by the token’s authenticity. It was bought for $1,750. 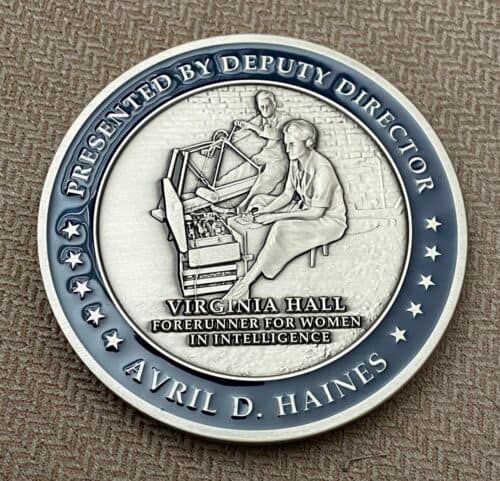 Here’s another challenge coin from the world of the CIA. In this case it was in the gift of the Agency’s deputy director, Avril D. Haines.

Ms Haines took up the position in 2013, appointed by the then President, Barack Obama. She later became Deputy National Security Adviser, the first woman to hold that post.

On one side of the coin is an image of Virginia Hall, another trailblazing woman. During the Second World War, she was the first female agent to take up residence in France. On the other side is the CIA’s logo of an eagle atop a shield with a star on it.

The coin measures 3 inches in diameter, and it was in excellent condition when it was offered for sale online in 2022. The asking price was $1,500, but the seller accepted a lower offer. 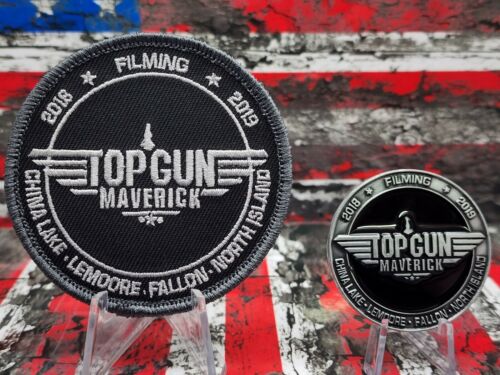 Another rich source of collectable challenge coins is the world of films. Coins are sometimes given to those involved in the production process as a memento.

So it was with these coins, produced to mark the filming of the Top Gun sequel, Maverick, in 2018. They were given out by the production crew to various ViPs. Each one came in a set with an embroidered patch.

The lot that was offered for sale via eBay in 2022 included five sets. It was snapped up for $1,500, probably for onward sale to collectors. 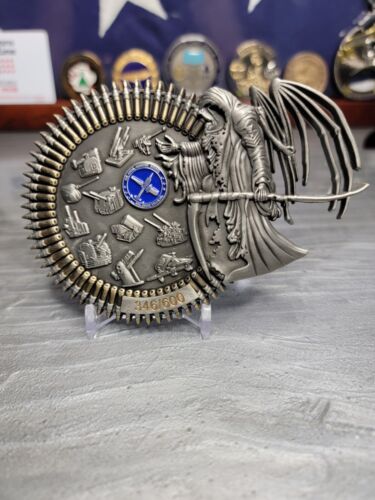 For those of us not familiar with the world of Gunner’s Mates, however, here’s an explanation. They’re the people who are responsible for maintaining the Navy’s small weapons and guided missile launching systems. That includes tracking and ordering ammunition.

This coin presumably marks attendance at the US Navy’s Gunnery School. The school’s name is inscribed on one side of the coin.

On the other is the legend, “Dealers of death and destruction”. For anyone finding that too subtle, a figure of the Grim Reaper, scythe in hand and with naval epaulettes on his shoulder, decorates both sides.

It was offered for sale via auction in January 2022, and attracted fierce competition. The winning bidder paid $1,375 to secure it. 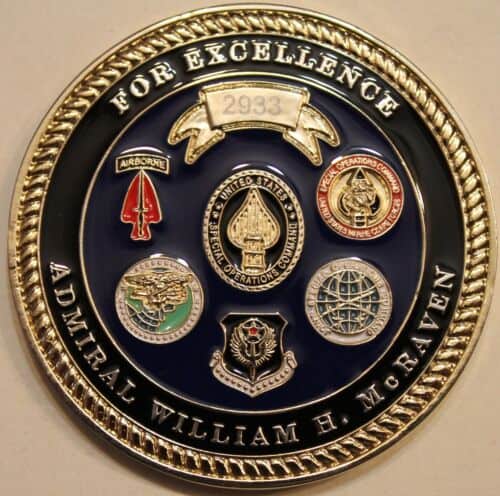 This coin was in the gift of Admiral William H. McRaven, Commander of US Special Operations. It was virtually unknown outside the intelligence community until 2012. But when news of McRaven’s involvement in the Osama Bin Laden mission surfaced, fake coins soon followed.

This specimen, however, is the real deal. It has the correct emblem of the Navy Seals, changed slightly in the fakes. And the size and position of the stars on the authentic coins is different too.

This is the Type 2 of the two existing variants of the coin. It has the serial number #2933, and carries the maker’s mark on the edge.

It was offered for sale online in 2022 at a fixed price of $1,359. Its pedigree and good condition meant that it was quickly snapped up by a collector. 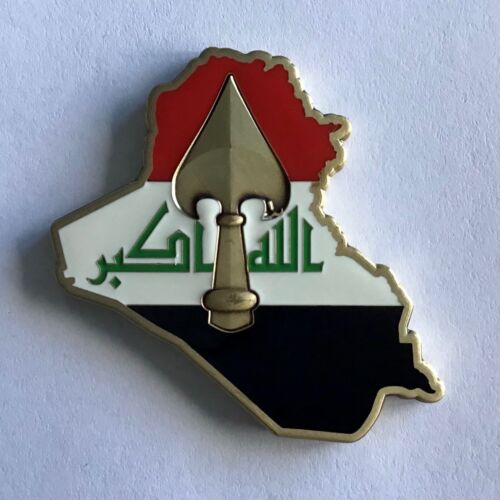 This striking challenge coin is shaped like a map of Iraq, with the country’s flag serving as a background. On the reverse is the legend “Embassy of the United States of America”, together with an engraving of a cityscape beneath crossed swords.

It is reputedly the coin given to key contacts involved with the CIA station in the Iraqi capital of Baghdad. And authentic versions are difficult to find. 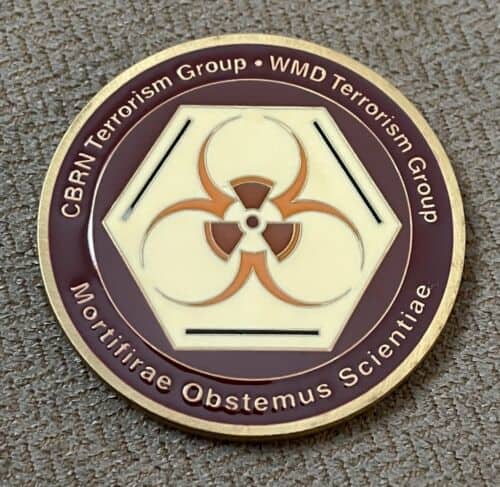 The CIA apparently found challenge coins very useful, because there are a lot of different versions on the market.

This one purportedly comes from two groups involved in counterterrorism. One group focused on chemical, biological, radiological and nuclear threats, the other on weapons of mass destruction.

The enthusiasm for Latin mottos is evident here too. One side of the coin bears the legend “Mortifirae obstemus scientiae”, which translates as “Let us resist the deadly science”. The other side carries the CIA’s eagle and shield logo.

The coin was offered for sale online in 2022. It was in good condition, and the seller accepted an offer against the asking price of $1,250. 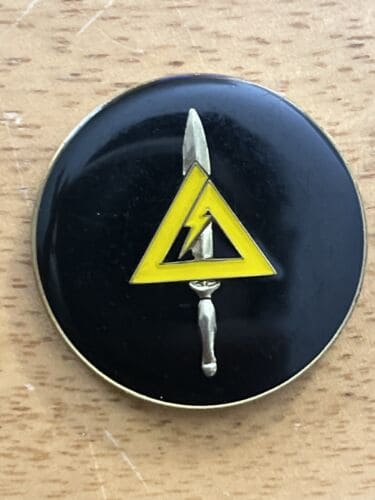 This striking challenge coin is another that comes from the military. This one bears the emblem of the 1st Special Forces Operational Detachment: Delta – more commonly known as Delta Force.

It comes under the authority of the Joint Special Forces Command and is tasked with the most difficult, secret and dangerous missions.

Perhaps it’s not surprising, then, that this challenge coin was highly desirable to collectors. It was presented for auction online in 2022, and attracted lots of interest. The winning bidder paid $1,165 to secure it.

A Challenge to Collectors

We hope you’ve enjoyed our look at some of the most valuable challenge coins out there. As we’ve seen, there are lots of collectors prepared to pay serious money to own them. And that also means it’s important to look out for fakes.

If you’re thinking of investing in an expensive challenge coin, do your homework first. Make sure you know exactly what you’re getting, and buy from a reputable dealer.

But most importantly, enjoy owning one of these rare and special objects!