A penny or cent is one-hundredth of a dollar, which means a hundred cents or pennies make a dollar. In the French-speaking parts of Canada, the coin is sometimes called a black cent (cenne noire) or black penny (sou noir). As we trace the most valuable Canadian penny, we’ll look at the history of these coins and their commercial significance to the nation’s economy. 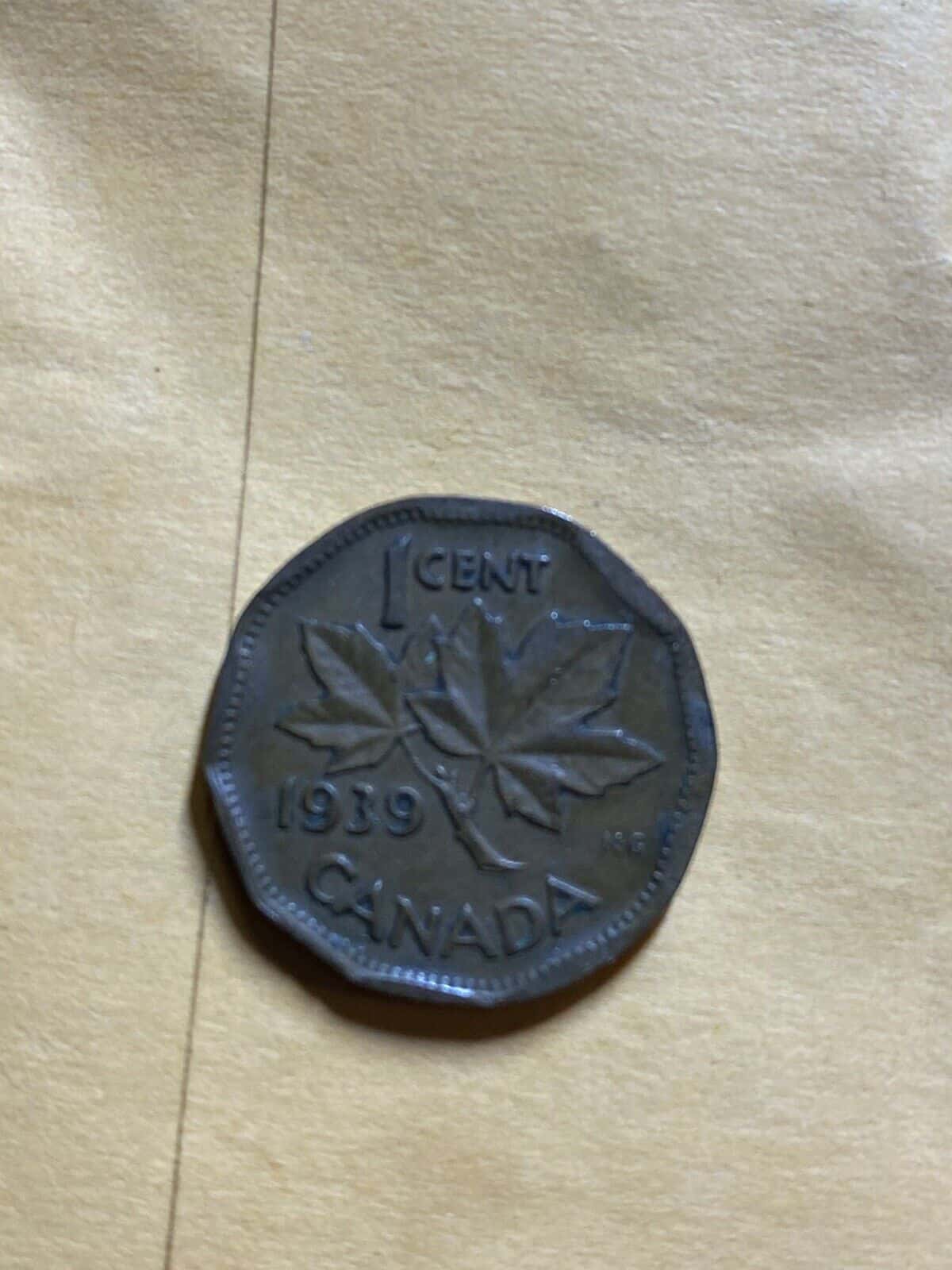 Let’s start with the basics. Just like the US, Canada had a native pre-colonial population. The tribes are known as the First Nations, and many retain their indigenous languages. Canada had colonial powers from both the UK and France, so these are their two official languages.

In Quebec, most people speak Québécois French aka Canadian French. This province has the second-largest population in Canada, and they refer to Canadian pennies as sou. Montreal is the biggest city in Quebec, named after its three-peaked mountain, the famous Mt. Royal. 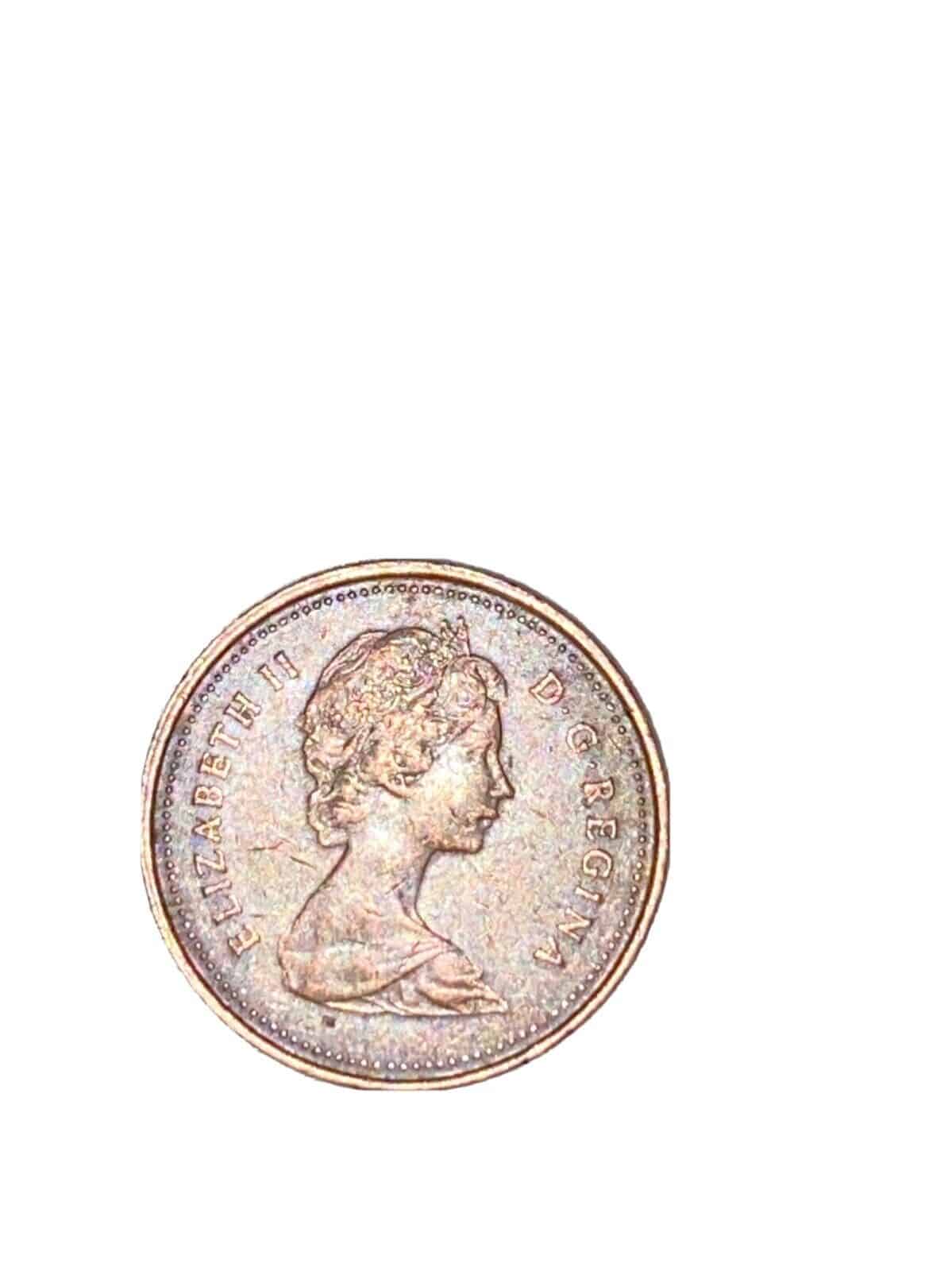 Canada considers itself part of The Commonwealth. These are fifty or so countries that were mostly colonized by the UK, and it’s a voluntary association of nations. Many commonwealth states have reigning British monarchs on their earliest coins, including the Canadian penny.

In those early days, Canada was a monarchy, but instead of having its own local kings and queens, they answered to the royal family in Britain. So Canadian pennies from various eras featured Queen Victoria, King George V and VI, King Edward VII, and Queen Elizabeth II. 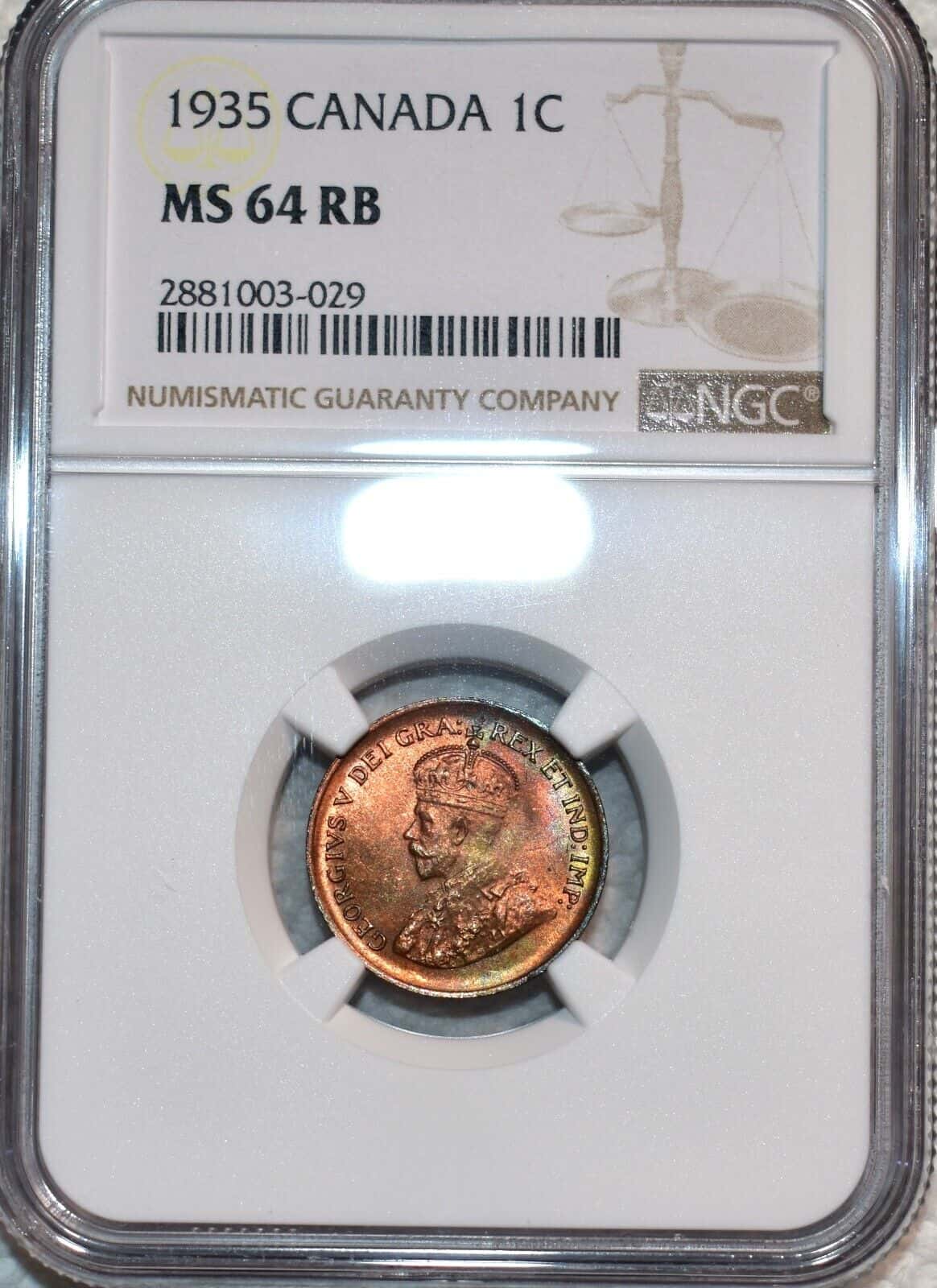 These coins had the monarch on the obverse (heads side) and some variant of a maple leaf on the reverse (tails side). They were coined from 1858 to 2012 and their metal composition changed over the centuries. The oldest versions were bronze, but today’s coins contain steel.

The bulk of the coin is made of steel – an alloy of iron and carbon. The steel portion of the coin accounts for 94% of its mass, while 1.5% is nickel with an outer coating of copper plating for the final 4.5%. The initial coins were an inch in diameter (25.4mm) and weighed 4.54g. 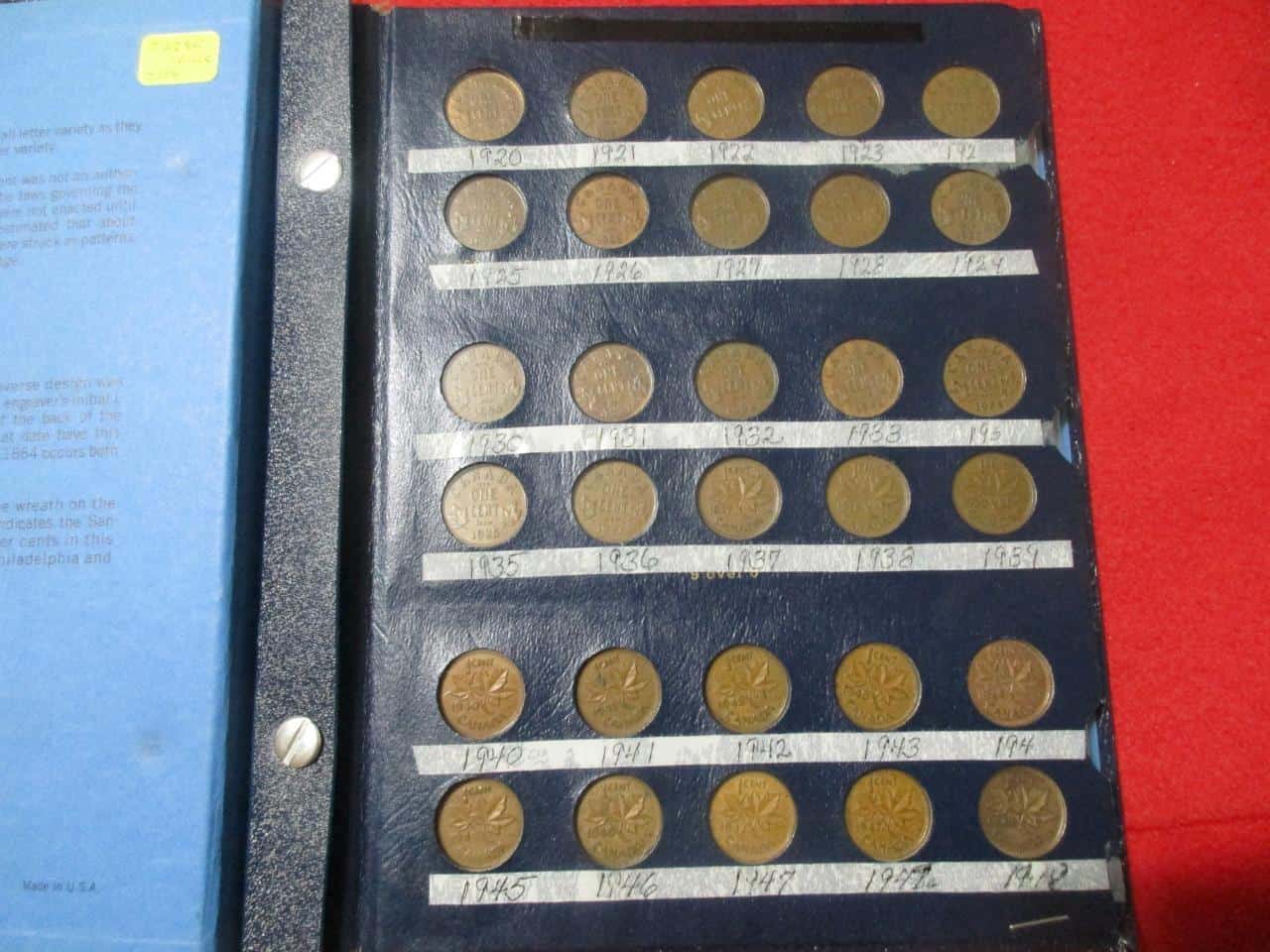 Let’s talk a little more about the metal composition of Canadian pennies. In their earliest form, the coins were 95% copper, 4% tin, and 1% zinc, which is a popular bronze ratio that’s sometimes called French bronze. Later, the mix became 95.5% copper, 3% tin, and 1.5% zinc. 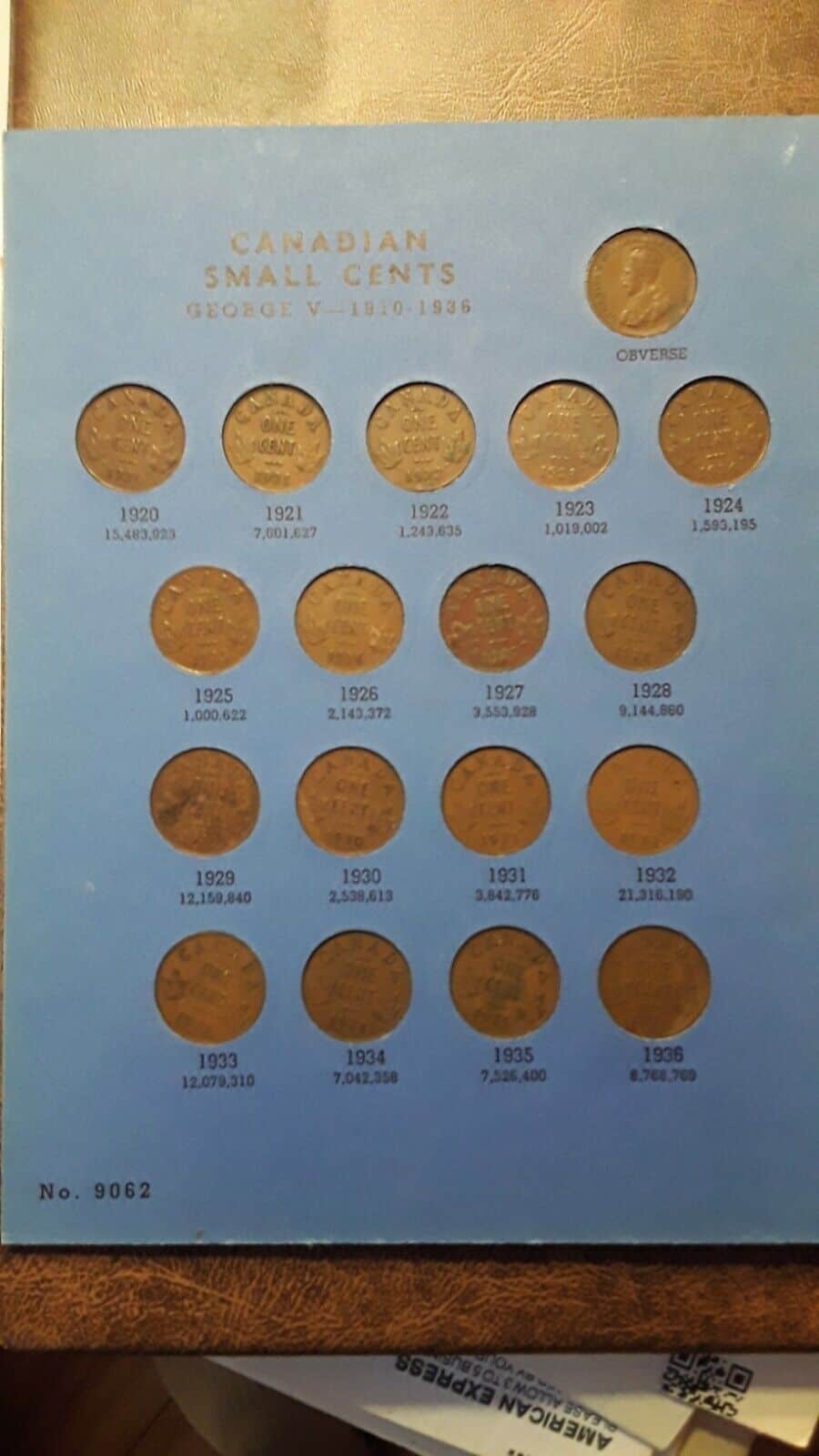 The varied metal composition meant Canadian coins from different generations had diverse weights, even though their diameter stayed the same after 1920; they were 19.05mm or ¾”. The lightest zinc coins were minted from 1997 to 1999; 98.4% zinc with 1.4% copper plating.

These coins only weighed 2.25g since they were mostly zinc with a thin copper coat on the outside. The year 2000 introduced contemporary Canadian pennies with 94% steel, 1.5% nickel, and 4.5% copper plating. These coins weighed 2.35g and were phased out after 2012. 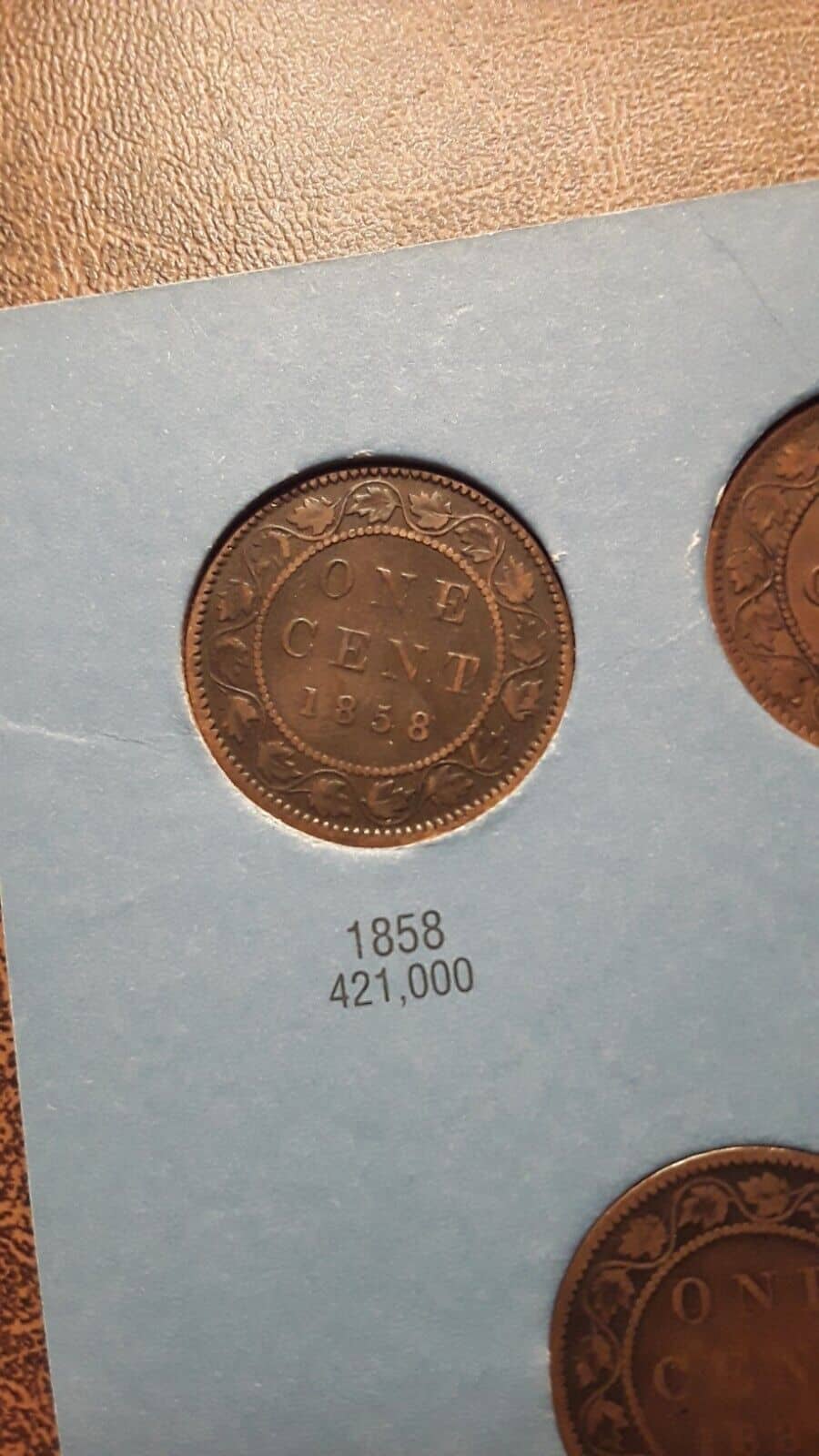 The early 1” coins seem large by modern standards. But since they were made of base metals rather than precious metals, they weren’t as hefty. The public was used to dense coins from America, Britain, and Spain, so they didn’t much like these new lightweight Canadian coins.

Since the citizens largely rejected these original coins, the Canadian Mint came up with an alternative to please the public in 1876. The coins had Queen Victoria on the obverse and a ring of maple leaves on the reverse. The coins were also heavier, at 5.67g or 1/5 of an ounce. 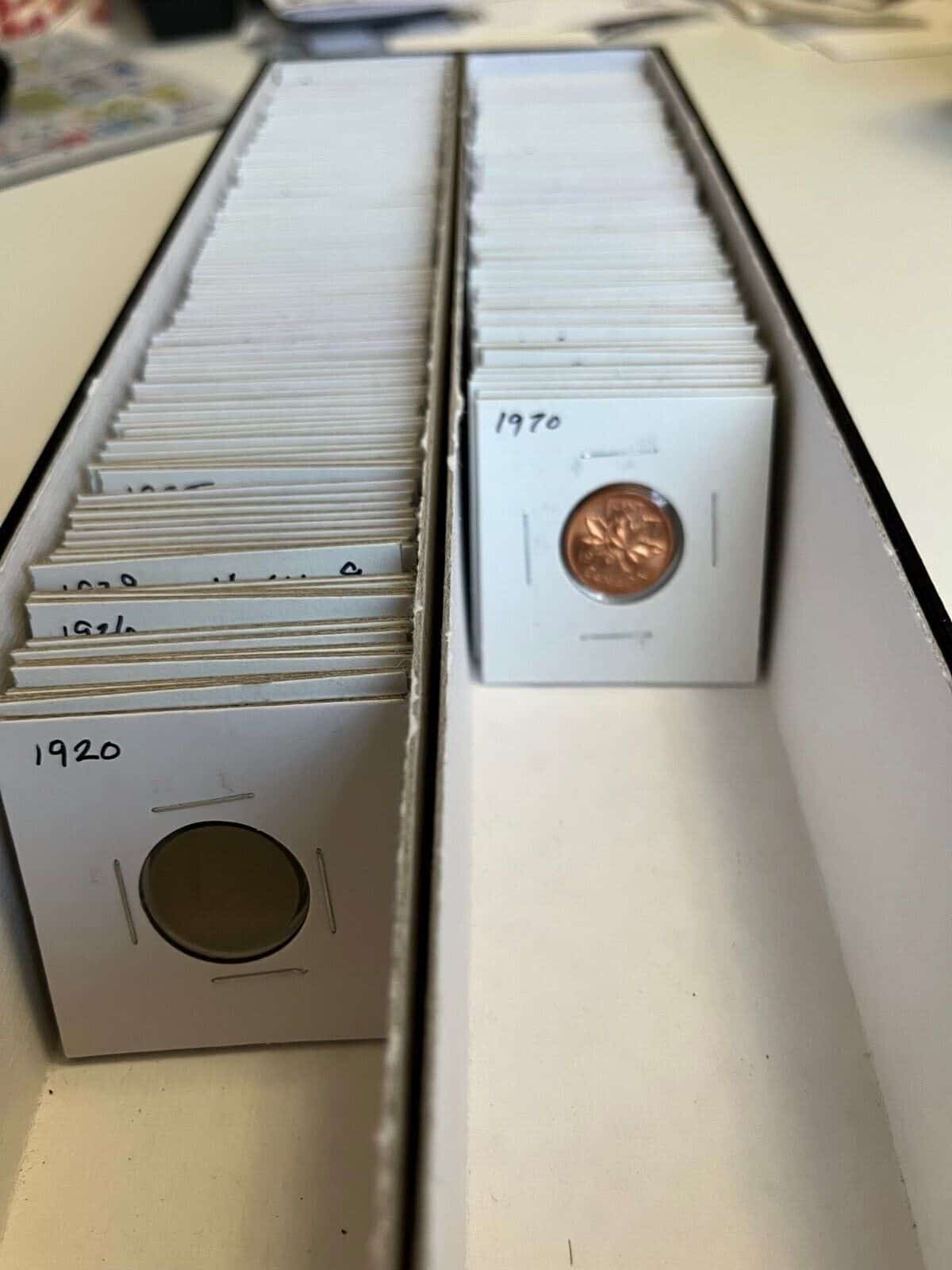 In 1867, Queen Victoria was the Queen of the United Kingdom aka Ireland and Great Britain. For reference, Great Britain = Scotland, England, and Wales, so adding Ireland makes it the UK. Meanwhile, Canada had four recognized provinces that formed the Dominion of Canada.

These provinces were formalized into a federation via the Confederation on July 1, 1867. The provinces were Quebec, Ontario, Nova Scotia, and New Brunswick, all under Queen Victoria. After this, Canadian pennies used the equivalent British half-pennies as their base planchets. 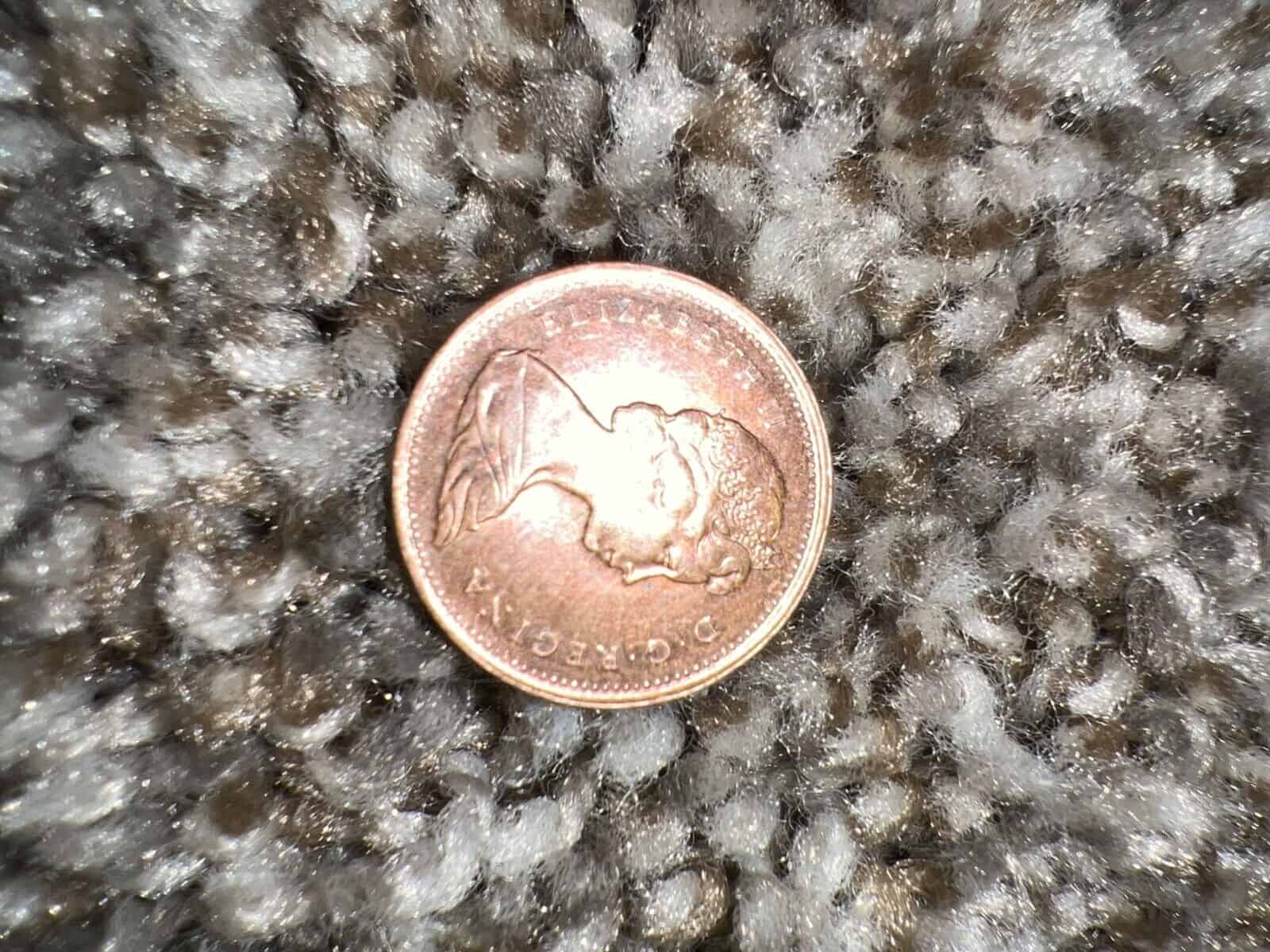 If you’re unfamiliar, a planchet is the blank metal disc that gets stamped to become a coin. The British halfpennies had the same size, metal composition, and melt value as Canadian pennies, so they made sense as a base. Later, coins got smaller to match American pennies.

The large earlier Canadian pennies (Queen Victoria, King Edward VII, King George V) had crowned monarchs and shared the reverse, which was a circle of maple leaves. The smaller coins featured the royals without their formal crowns and ditched the ring of leaves as well. 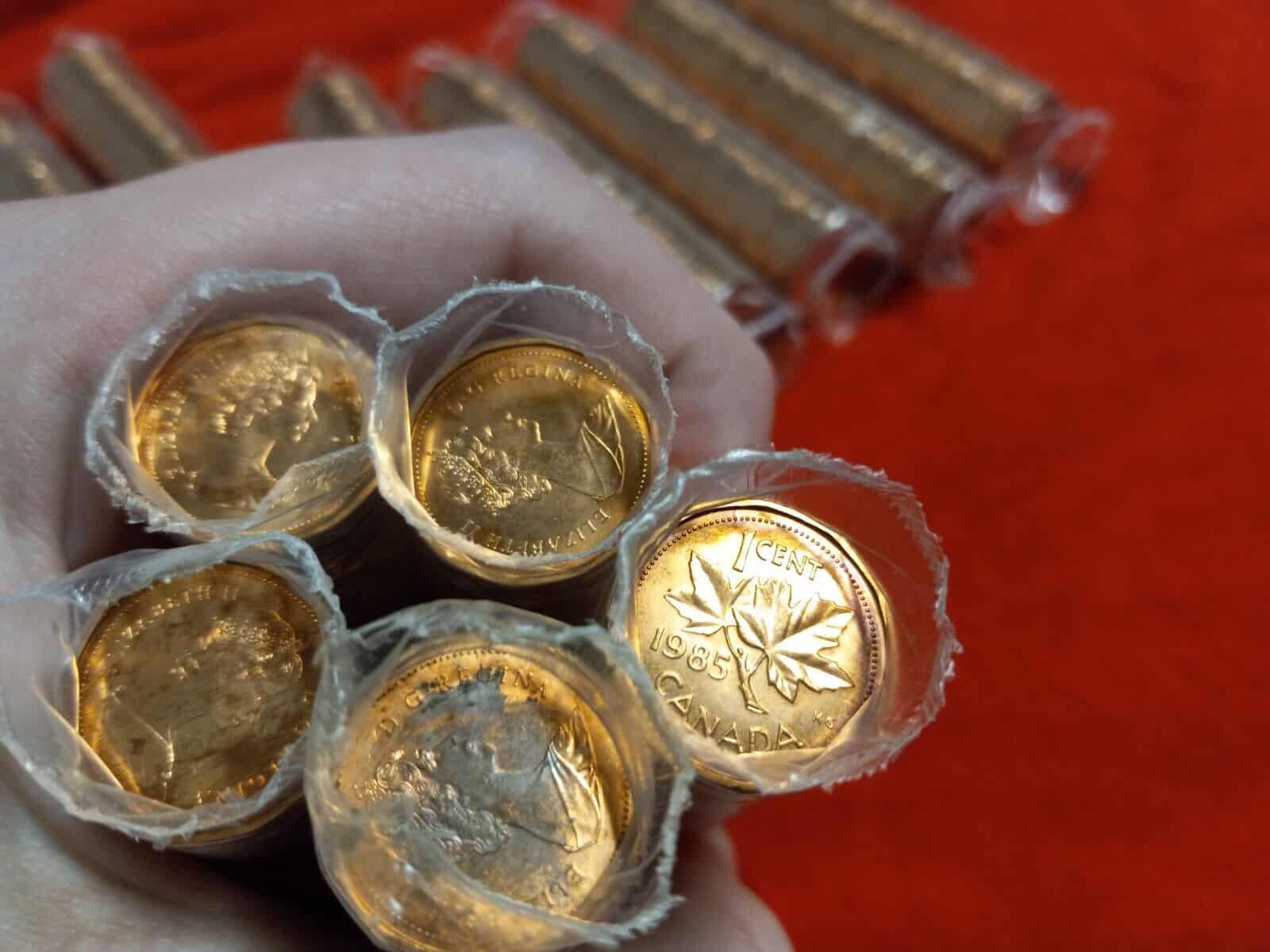 Starting in 1920, Canadian pennies shrunk to 19.05mm in diameter, and as we mentioned, featured monarchs that were not wearing their official headgear. Queen Elizabeth II made her Canadian penny debut in 1953 and stayed until 2012 when penny production stopped.

These Queen Elizabeth II coins were redesigned three times. Dora de Pedery-Hunt did the 1990 update. She was a Canadian of Hungarian descent and was the first Canadian citizen to sculpt the Queen on a coin. Previous portraits had been created by coin experts from the UK. 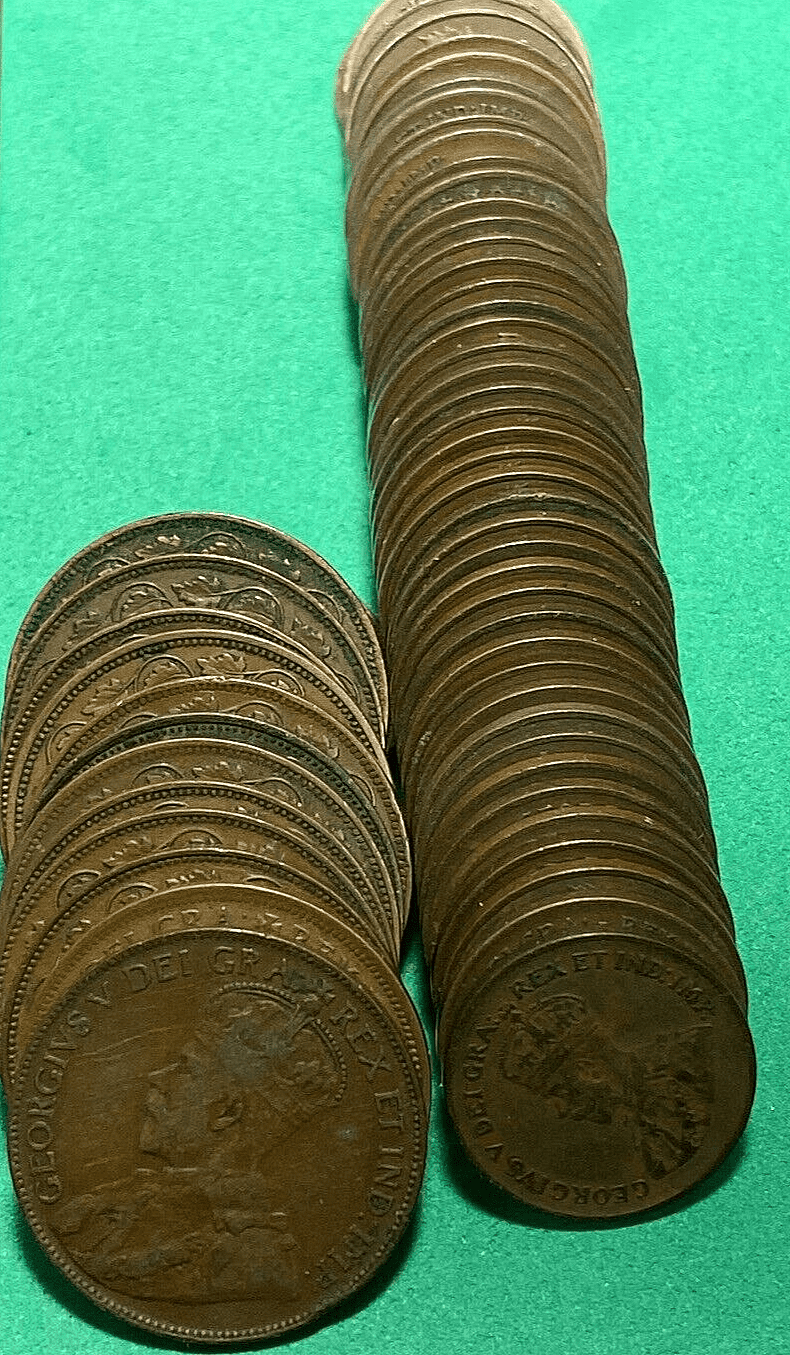 All the Canadian pennies featuring Queen Elizabeth II have a pair of maple leaves on the reverse. This emblem was designed by George Edward Kruger Gray in 1937. He went by G.E. and his design had denticles framing both sides of the coin, with the leaves in the middle. 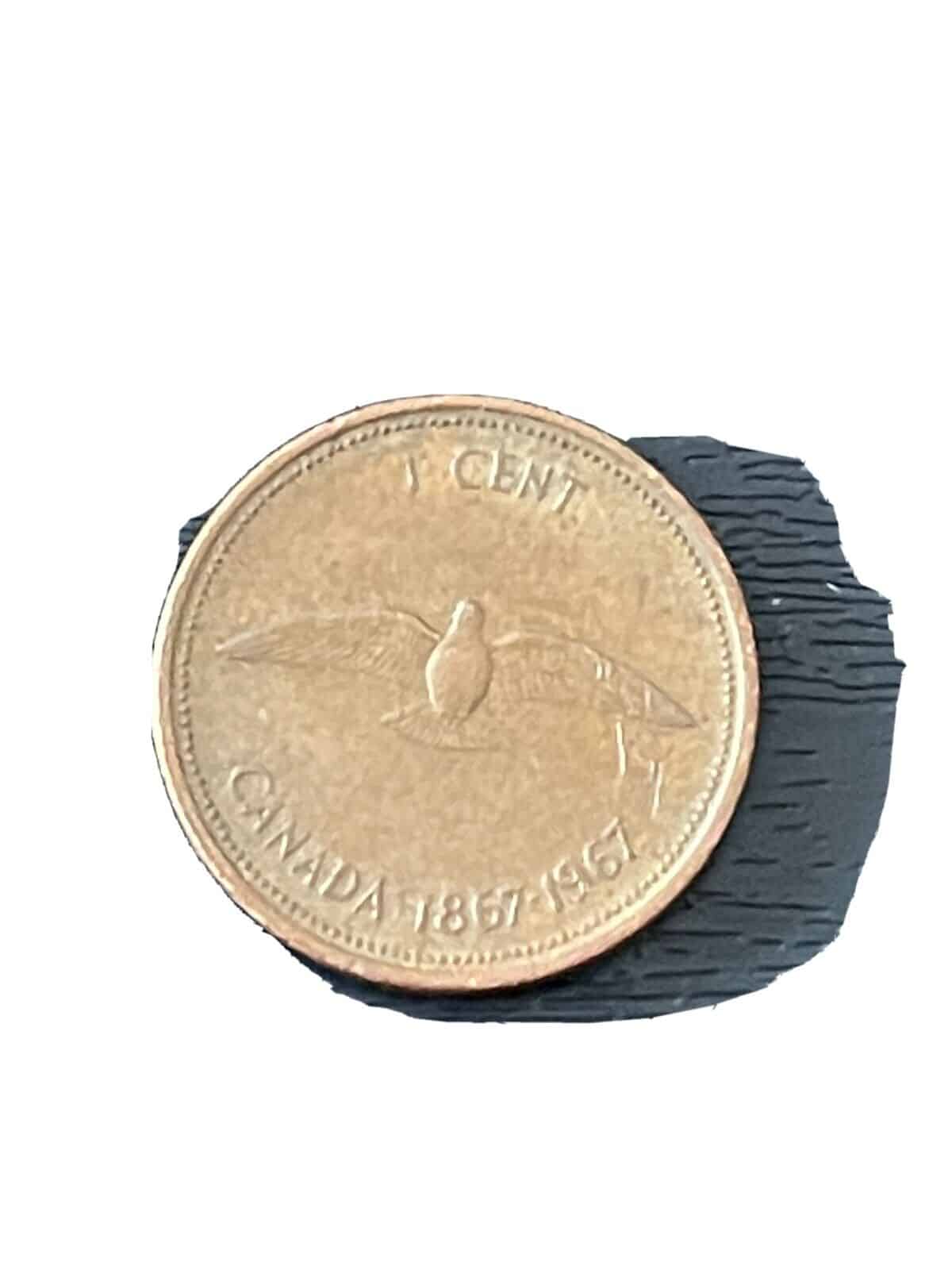 In 1967, a special penny was minted to celebrate the 100-year anniversary of Canadian Confederation. This coin had Queen Elizabeth II on the obverse and a rock pigeon on the reverse. The easily recognizable bird is sometimes called a rock dove or a common pigeon.

It’s the type of pigeon you’ll see on city streets with its grey body and flashes of aqua, blue, green, and purple on its iridescent neck. On the coin, the bird has its wings outstretched while the front of the coin features a young Queen Elizabeth II wearing her royal tiara. 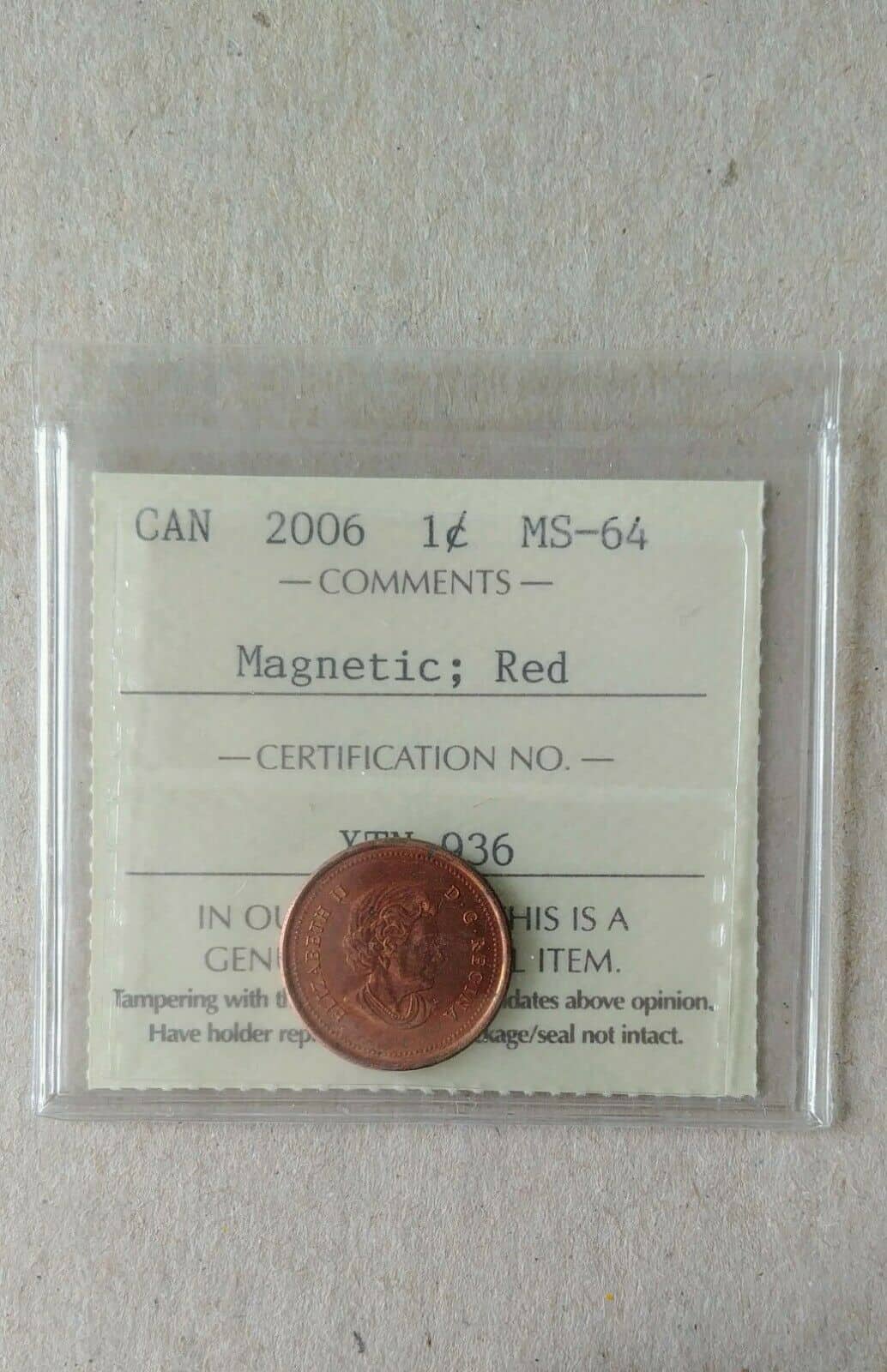 Apart from the distinctive reverse and the crown, you can identify centennial pennies because they have two years on the reverse: 1867 – 1967. This characteristic distinguishes Canadian pennies from American ones, which have the year of mintage on the front instead.

But let’s talk about another British (and therefore Canadian) monarch, King Edward VIII. He was only king for a year before stepping down to marry his beloved, Wallis Simpson. She was an American and a divorcée, so in order to wed her, he abdicated his birthright and throne. 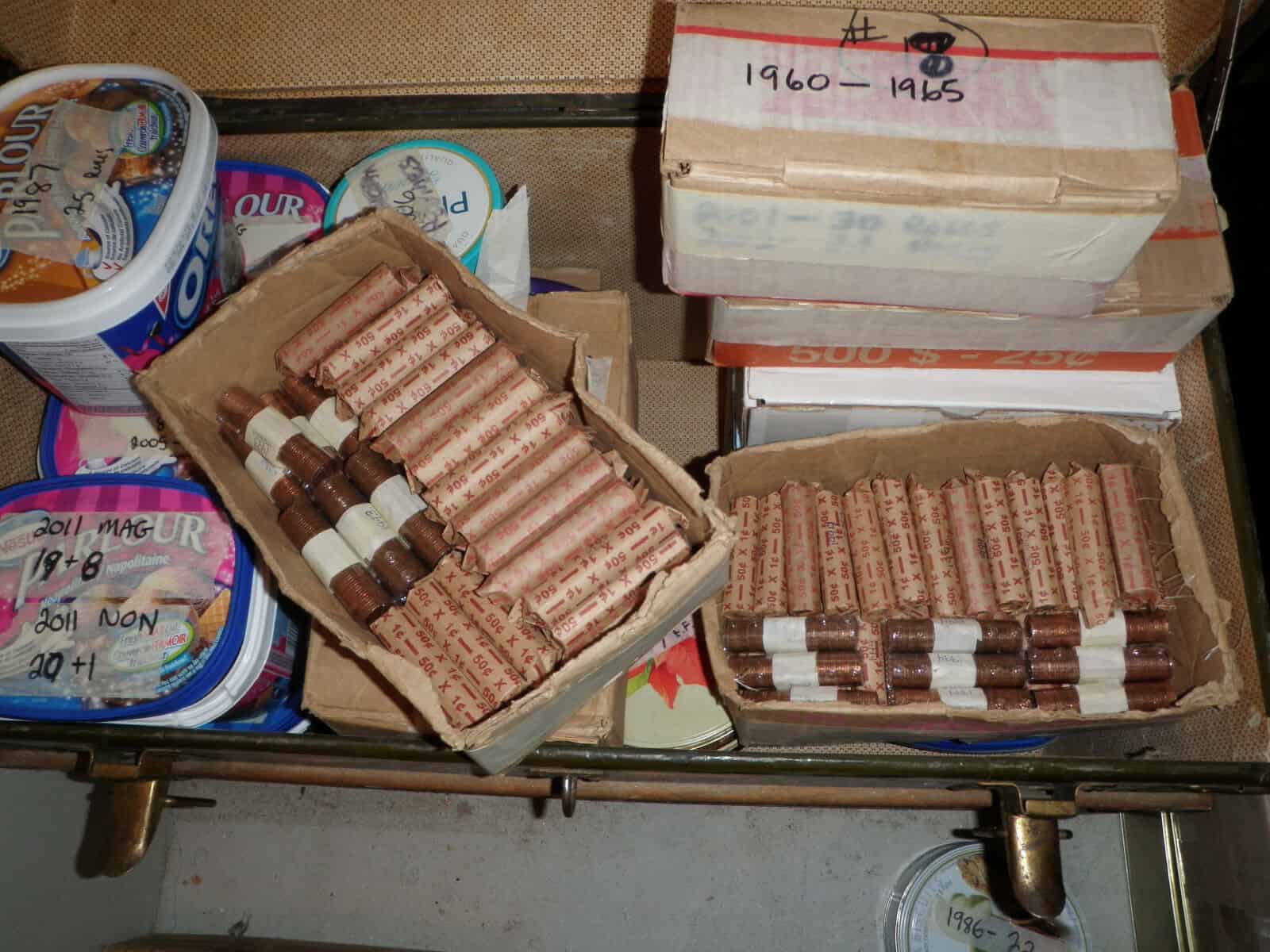 Before abdication, the former king held the official title of the Prince of Wales, but after his wedding, he became the Duke of Windsor. But what does this have to do with Canadian pennies? Remember, Edward VIII was only on the throne for a year, so he had no coins yet.

When he stepped down, the Mint had to make new dies for the incoming king, George VI. During the stopgap, they issued four coins that came to be known as the 1936 Dot Coins. The coins were stamped 1936 but minted in 1937, and you could identify them by the distinct dot. 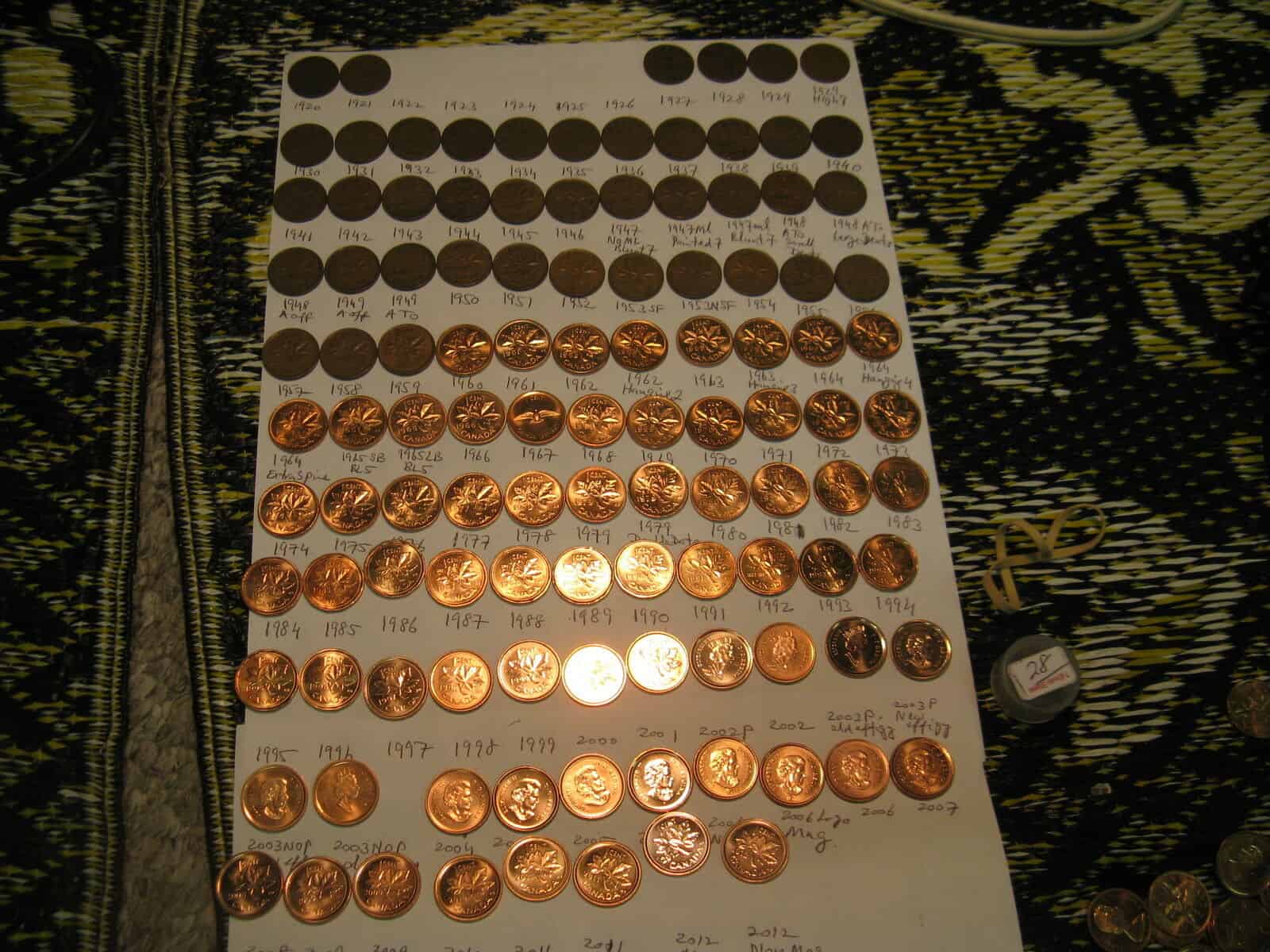 Because only four of these 1936 Dot Coins exist, they can fetch a premium among collectors. One of the four sold for more than US$400,000 in 2010. The only other Canadian coin of this caliber is the 50-cent piece from 1921 with Queen Elizabeth II (King of Canadian Coins). 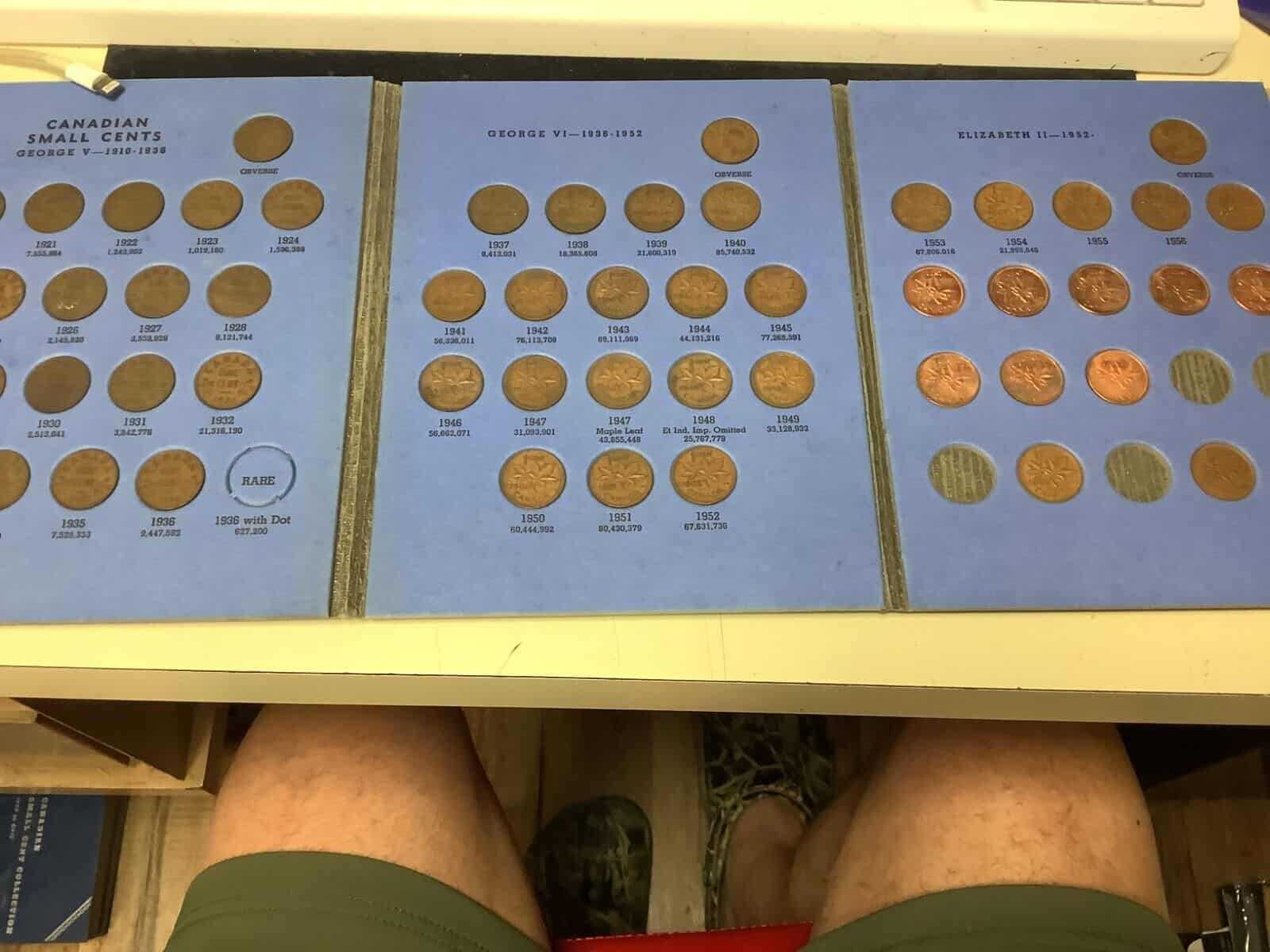 The 1936 Dot Coins were also the last Canadian pennies that had the reverse design from 1920. If you recall, 1920 is when the coin got smaller and adopted the split maple reverse. This design had a maple leaf on each side with ‘One Cent’ and the mintage year in between.

These coins had ‘Canada’ stamped at the top of the coin rather than the bottom, while earlier coins had the year, denomination, and sometimes Canada inside the ring of maple leaves. After 1937, the reverse switched to today’s design of twin maple leaves on a single branch. 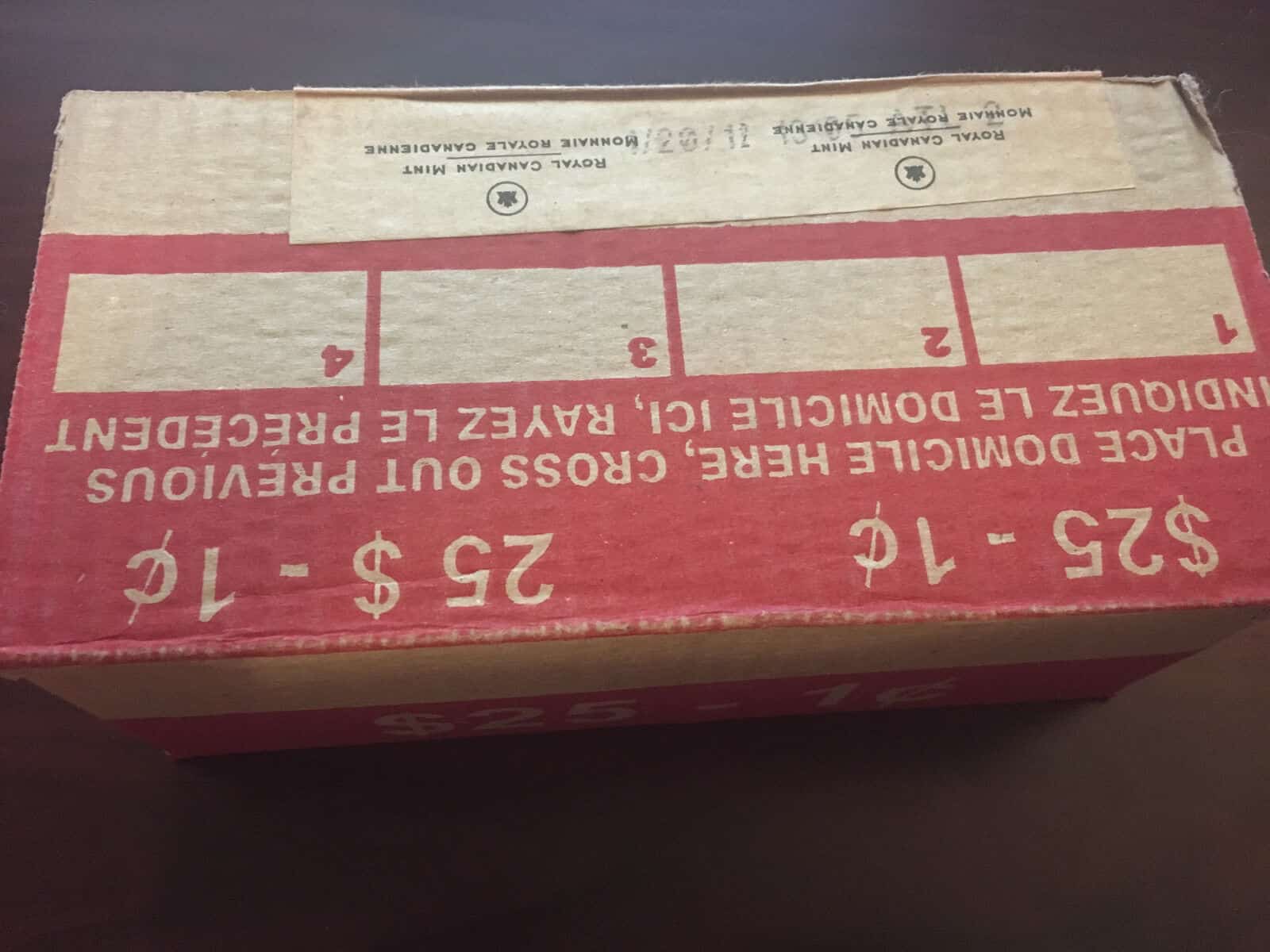 There was a time when half the world belonged to the British Empire, literally. They had colonies, territories, and protectorates that dotted the globe, which is how a UK King or Queen could also be the monarch of Canada, Australia, and Barbados. But things changed.

One such shift happened in 1947 when India gained independence from the UK. Since King George VI was now no longer the Emperor of India, the coins had to be altered. This meant they had to make new dies, and the delay meant some 1948 pennies came with 1947 stamps. 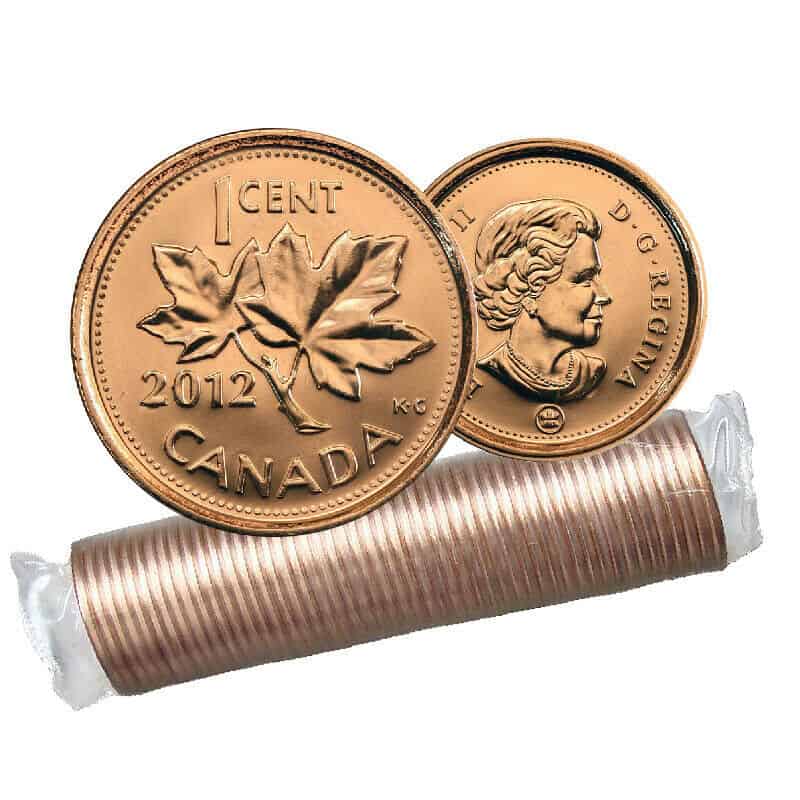 While these 1947 Maple Leaf pennies (made in 1948 but marked 1947) were unusual, the mintage was huge so the coins are common and don’t fetch as much in reselling spaces. So let’s look at a weirder Canadian cent – the 12-sided penny that coincides with millennials. 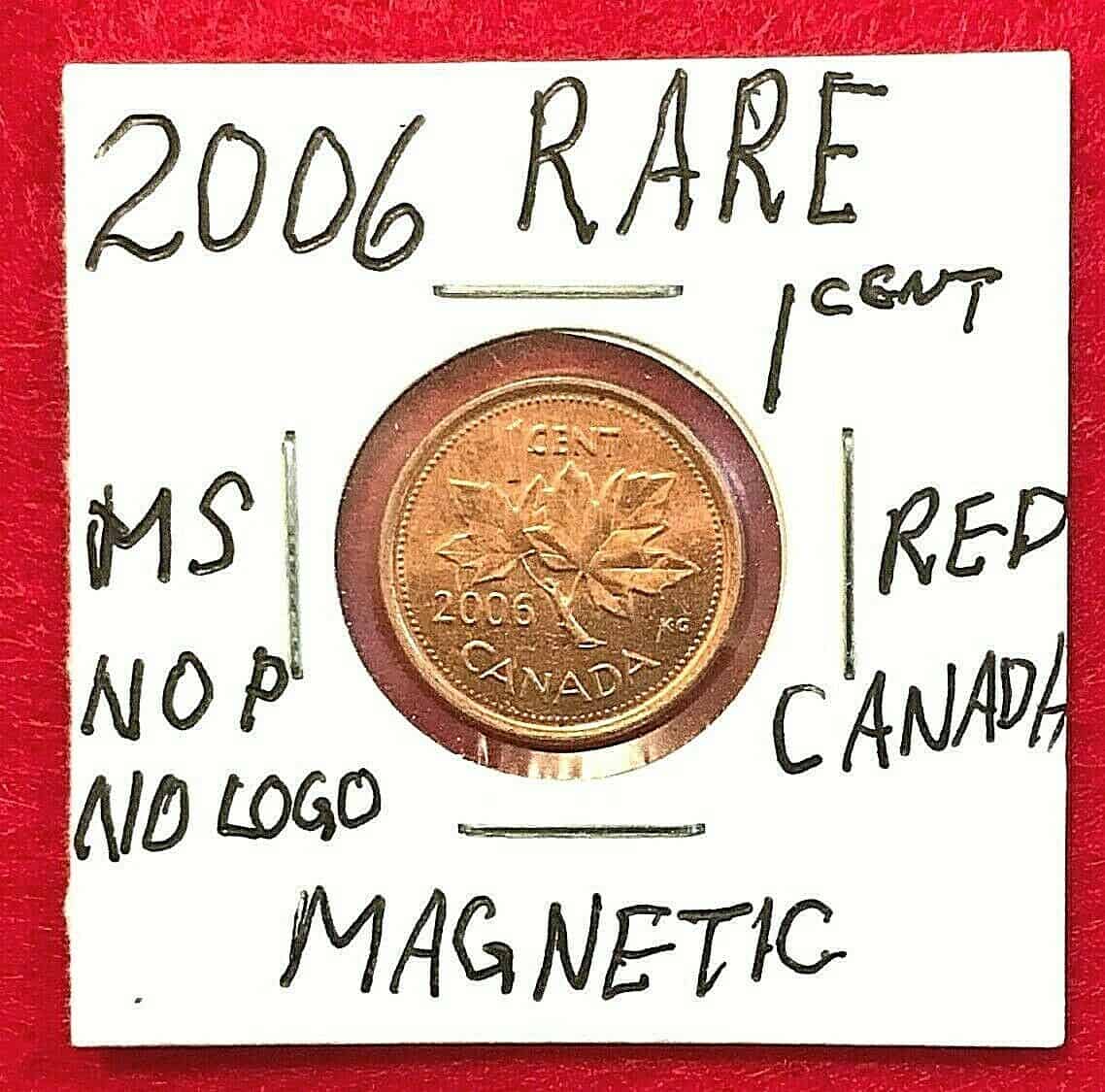 Why did these coins have a dozen sides? Well, in true millennial fashion, the coins were made for the differently-abled. Their shape made it easier for visually-impaired citizens to spot the coin by touch. The trouble came when the coins changed to 98.4% zinc in 1997.

While it’s simple enough to coat a round zinc coin with trace copper, it’s a much tougher ask when the coin has a dozen angles. So in 1997, the cornered coins resumed their round shape. But few people were using Canadian pennies and their production officially ceased in 2012. 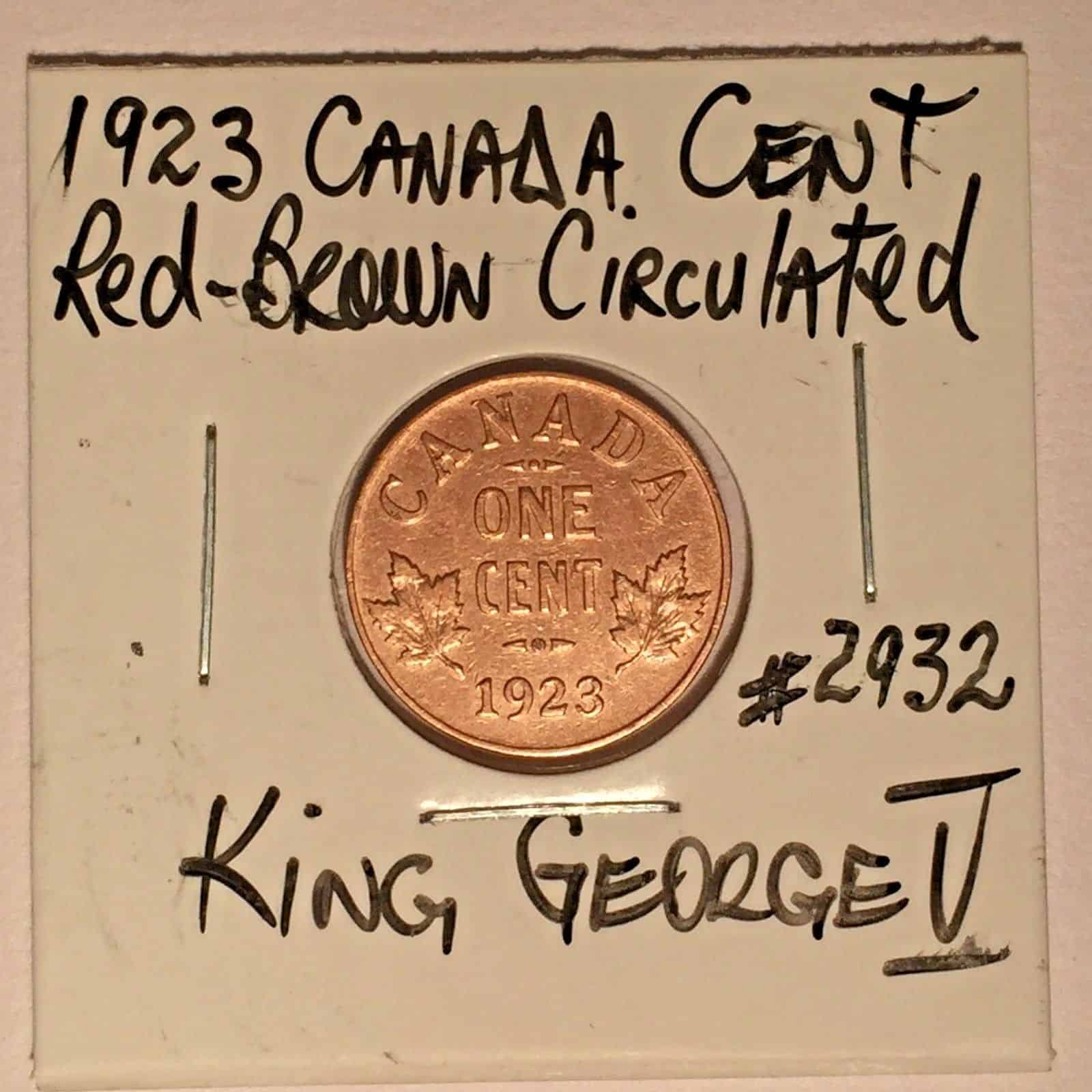 By the 2010s, it cost 1.6 cents to make a penny (worth 1 cent) so they killed off the coin. While no Canadian pennies have been minted since then, it’s still technically legal tender. But there’s hardly any demand, and most stores round their prices up or down to 5 cents.

The coins officially exited circulation in 2013, though lots of Canadians still have hoarded pennies at home. Google even posted a Google Doodle on February 4th to mark the death of the penny. But you can still find items priced in pennies due to credit cards and digital cash.

Do you own any valuable Canadian pennies? Tell us about your treasure in the comments!

I have a 1967 Canadian 1cent it marks 100 year anniversary of Canadian confederation has Queen Elizabeth the 2nd on obverse side and rock pigeon on reverse is there any value to this coin it says on this site that ts worth 100.00$ is that true?

I have a collection of Canadian circulated pennies from 1920 thru 1962. Are they worth having someone look at them to assess there value. If so who would you suggest to see that is legitimate. Is there a cost associated with this service? Thx.