Australia is perhaps better known for its natural beauty than its antiques. But in the world of coin collecting, there are some fascinating and highly collectable specimens from Down Under.

So what are the most valuable Australian coins? And what is it that makes them so sought after?

Step this way to find out! 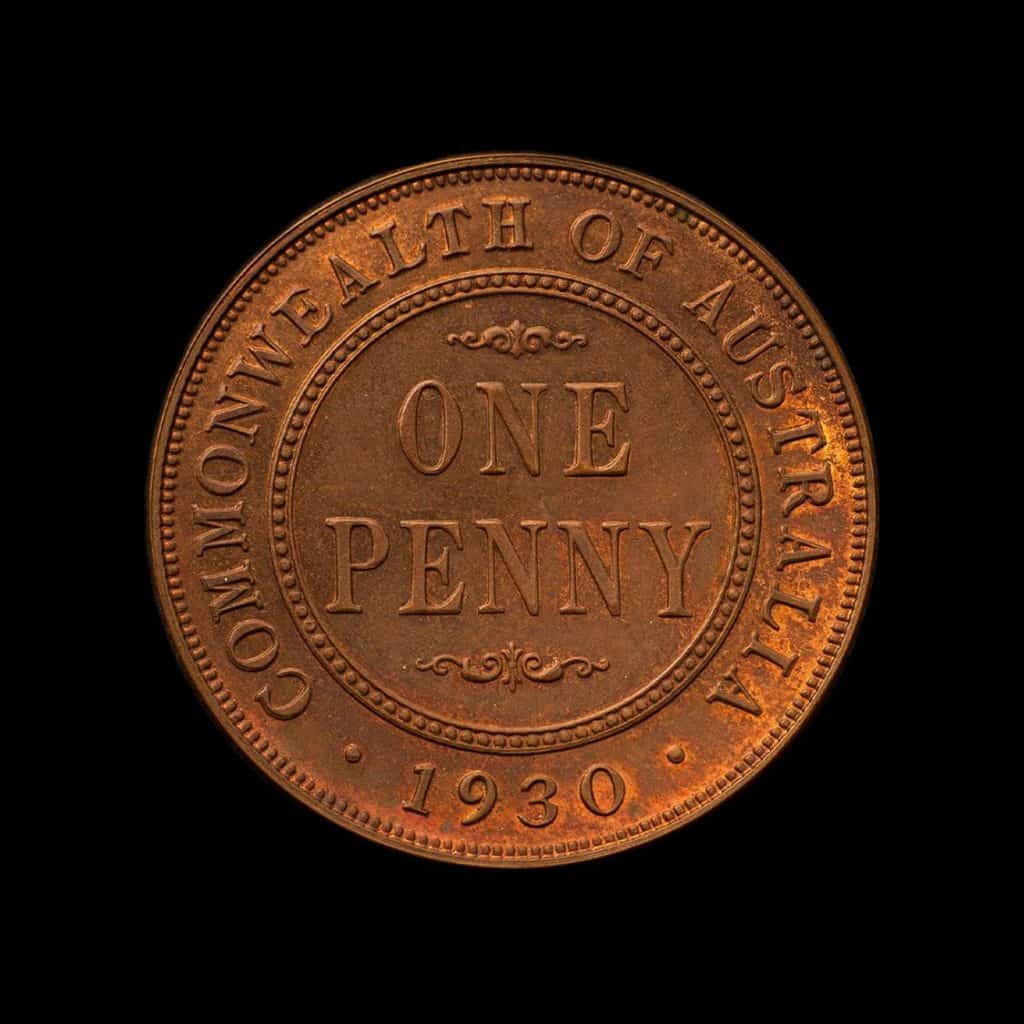 If you thought that valuable coins had to be made of precious metals, think again. This humble proof penny is the most valuable copper coin on the planet.

It was one of only six proof coins to be struck at the Melbourne Mint. Three are in museums, leaving only three available to private collectors.

And this particular coin is considered the best of the bunch. According to the sellers, it was handpicked by the deputy master of the mint, A. M. Le Souef, for his own private collection. That provenance made an already rare coin even more exciting to collectors.

But others claimed that the coin had never belonged to Le Souef. They pointed out that he had retired from his position at the mint in 1926, four years before the coin was struck.

If anything, the controversy added to the coin’s mystique.

So just how valuable can a copper coin really be? Well, the 1930 penny was never intended for circulation. But somehow a handful of coins still found their way into circulation.

This penny was in a different league. It was offered for sale by a leading Melbourne coin dealer in 2009. And while the details of the purchase are shrouded in mystery, it was expected to fetch around AUS $2 million.

This 1923 proof halfpenny came to auction in 2009. And its record-breaking price tag is perhaps what prompted the owner of the 1930 proof penny to put their coin up for sale too.

1923 halfpennies struck for circulation are considerable rarities. Only around 15,000 of them were made at the Melbourne Mint. That compares to well over a million pennies struck the previous year. The best quality example known to exist was sold in 2019 for $75,000.

But this particular coin is unique. It’s a proof coin, meaning it was crafted with exceptional quality and never intended for circulation. Proofs were produced for archival purposes, and in some cases for collectors. And this is the only proof of the 1923 halfpenny in existence. 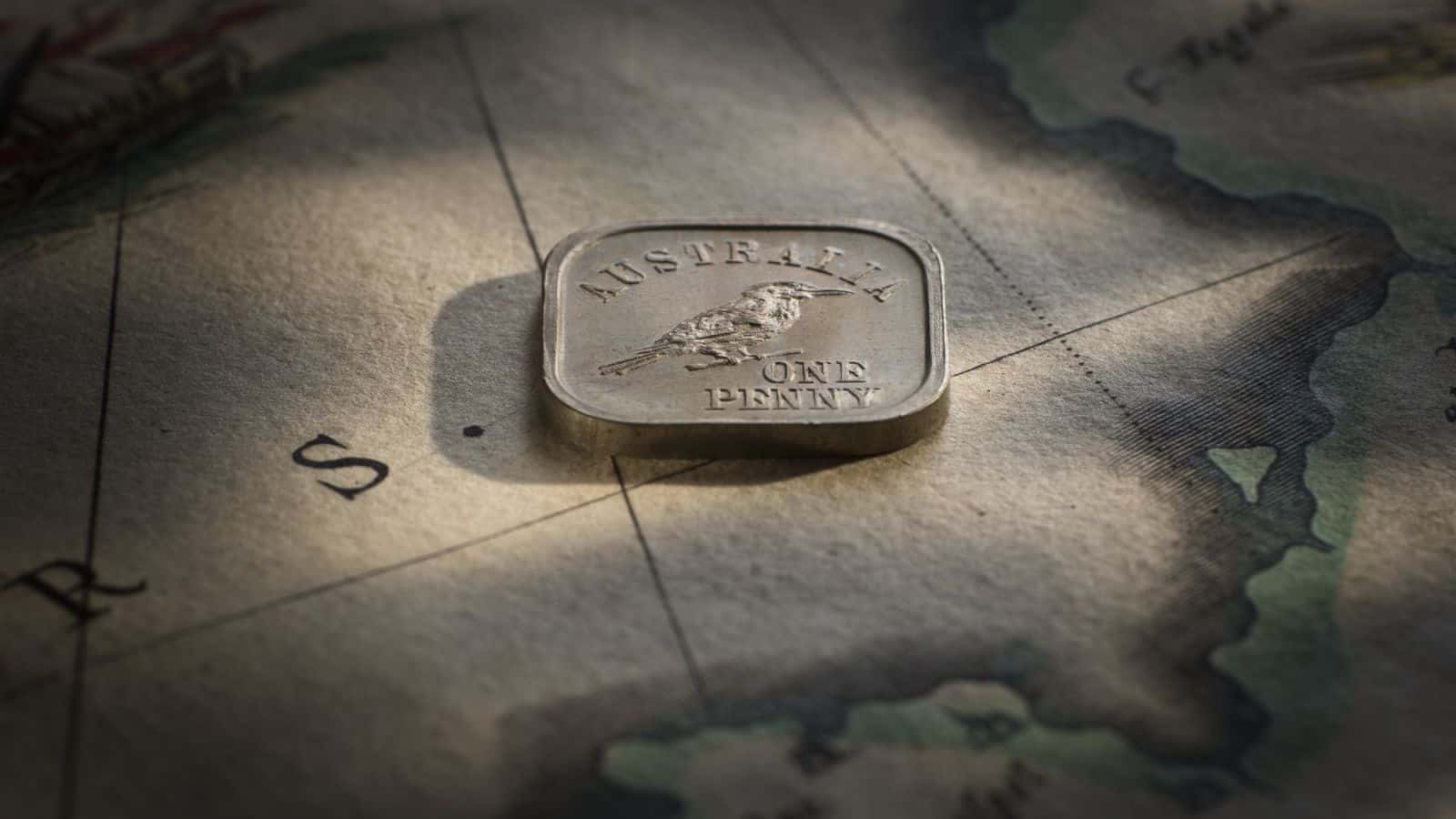 The square pennies minted in the early 1920s bear an image of a kookaburra on one side. The penny from 1920 is the rarest and most collectable of them all.

The coin was also made in a large number of different versions, referred to as “types”. The Type 9 was unusual in that the obverse side had the text (or “legend”) in a square.

But all the kookaburra coins are known have quality issues. The surfaces are often rather dull, with inconsistent tones to the metal.

This particular Type 9 specimen was special because of the quality of the strike. It was almost up to the standard of a proof, with crisp detailing on both sides. And the toning on both sides was superior to other examples too, with a warm golden tone on the obverse. 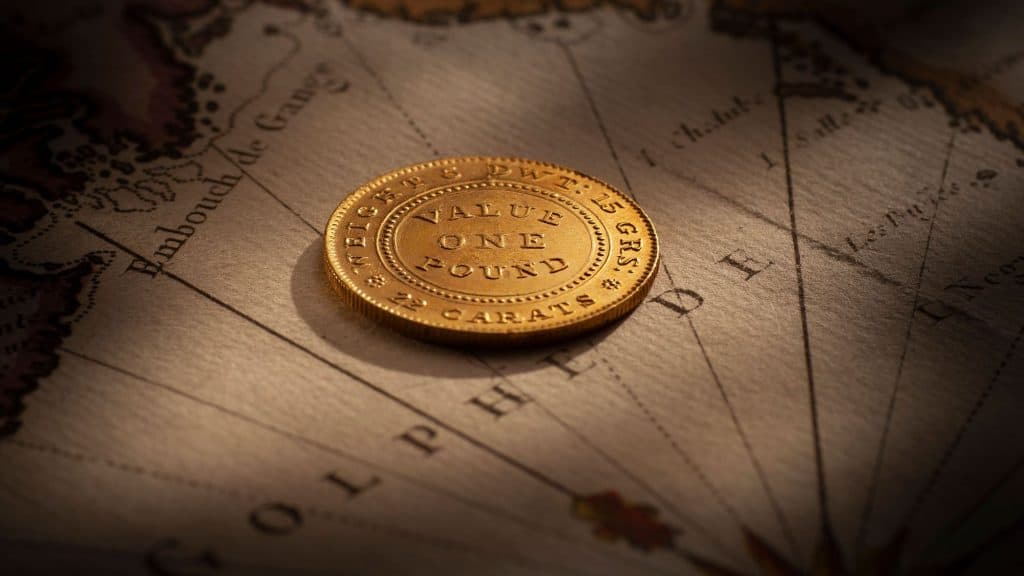 In this type, a flaw in the die resulted in a crack that runs through the letters “D W T” on one side of the coin. Only 40 such coins are known to have been produced. And of those, just three were uncirculated, leaving them in pristine condition.

This is one of those coins, and for many years it was owned by the American coin collector Mortimer Hammel. It came up for sale in August 2021, offered through the dealers Coinworks. It was quickly snapped up for AUS $600,000. That’s about US $410,000. 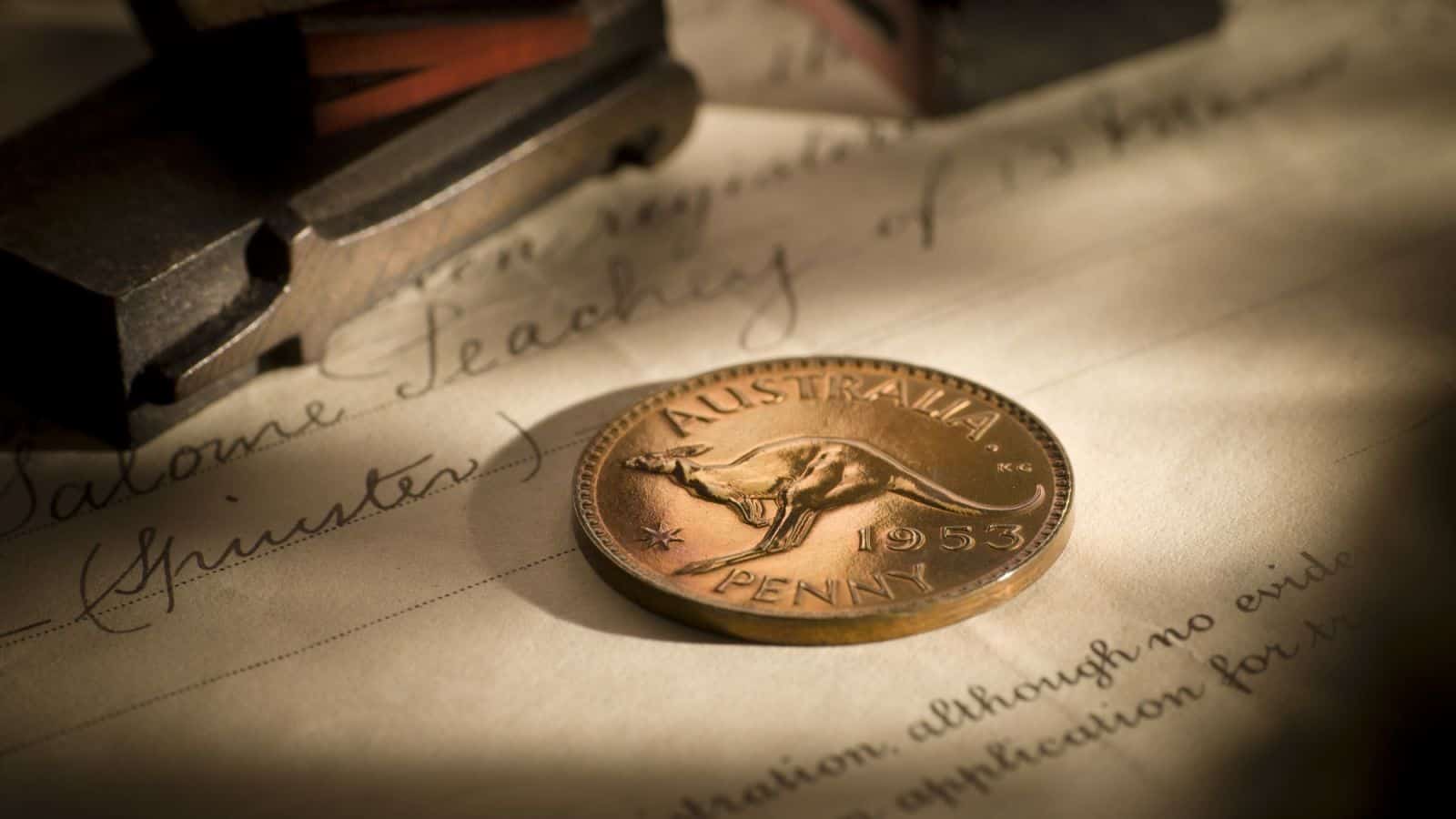 The Perth Mint first began striking coins in 1899. At that time, it was a branch of the London Mint, and its first tasks were to create Australian sovereigns and half sovereigns.

Making proof coins was a resource intensive process in the 1950s. Only around 20 proofs were typically produced. And even proofs of coins that are in plentiful supply in circulated versions can command high prices.

That’s the case with this 1953 proof Perth penny. It’s in excellent condition – described by the sellers as “superb FDC”. “FDC” stands for “fleur de coin”, meaning it’s pretty much perfect. 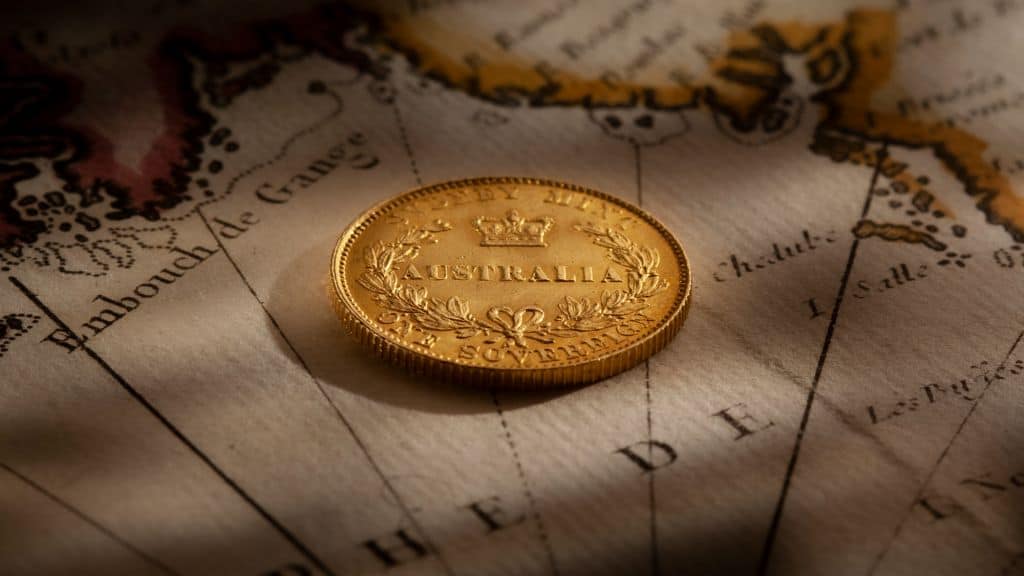 Australia’s first ever sovereigns were produced in 1855 at the Sydney Mint, giving them a special place in Australian history.

Over half a million coins were struck, but today they have become something of a rarity. Circulated coins in reasonable condition sell for around AUS $1,800.

This particular coin, however, had never been circulated. As a result, it was in the type of condition for which collectors were prepared to pay a significant premium. 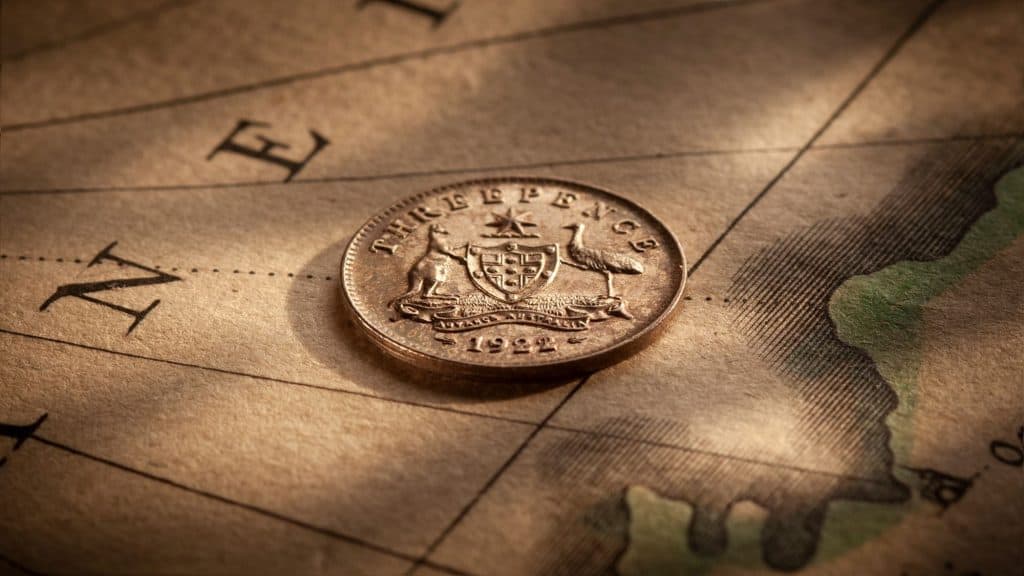 This particularly thruppenny bit is the rarest of all Australian coins produced for circulation. It’s unusual because of a flaw that’s known as an “overdate”.

This is just what you’d imagine – the last digit is a “1”, over which a “2” has been stamped. Both numerals are visible on the face of the coin.

How and why this came about has been the result of considerable debate amongst coin experts. Some believe that an old die was pressed into service. A simple punch, they believe, was used to replace the “1” with a “2”.

Others believe it’s simply a “filled die” – where part of the design was filled by grease or dirt.

Whatever its origins, the overdate is a rare coin. Only about 900 are believed to exist. And this example is the finest of all, in virtually uncirculated condition. 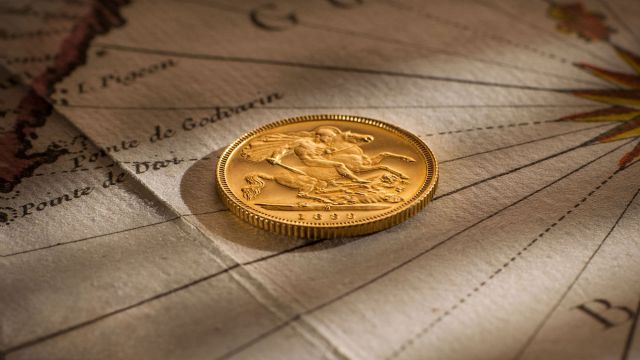 This beautiful gold coin dates from 1899. It’s a half sovereign that was struck as a “coin of record” at the Melbourne Mint.

Coins of record refer to proof coins that were struck in the Australian pre-decimal era. They were designed not for collectors, but to record a particular year’s mintage or design. As such, they are excellent quality, with crisp, clear strikes and highly polished fields.

And because they were produced for archives, rather than the private market, they are difficult to get hold of.

The Holey Dollar was one of the very first coins to be used in Australia, still a penal colony at the time. The governor of New South Wales, Lachlan Macquarie, enlisted the help of a convicted forger, William Henshall, to produce the coins.

The colony had already been running for 20 years without any currency. Convicts did not have money, and the soldiers supervising them were paid in promissory notes. But having had to pay 200 barrels of rum to purchase his own house, Macquarie felt it was time for a more practical approach.

He imported 40,000 Spanish silver dollars. A hole was punched in the middle of them to prevent them being used outside the colony. The doughnut shaped coin was them stamped with the denomination of five shillings and the date of 1813.

Most of the dollars were eventually melted down for bullion. Only about 300 are thought to survive, with about 200 of them privately owned. 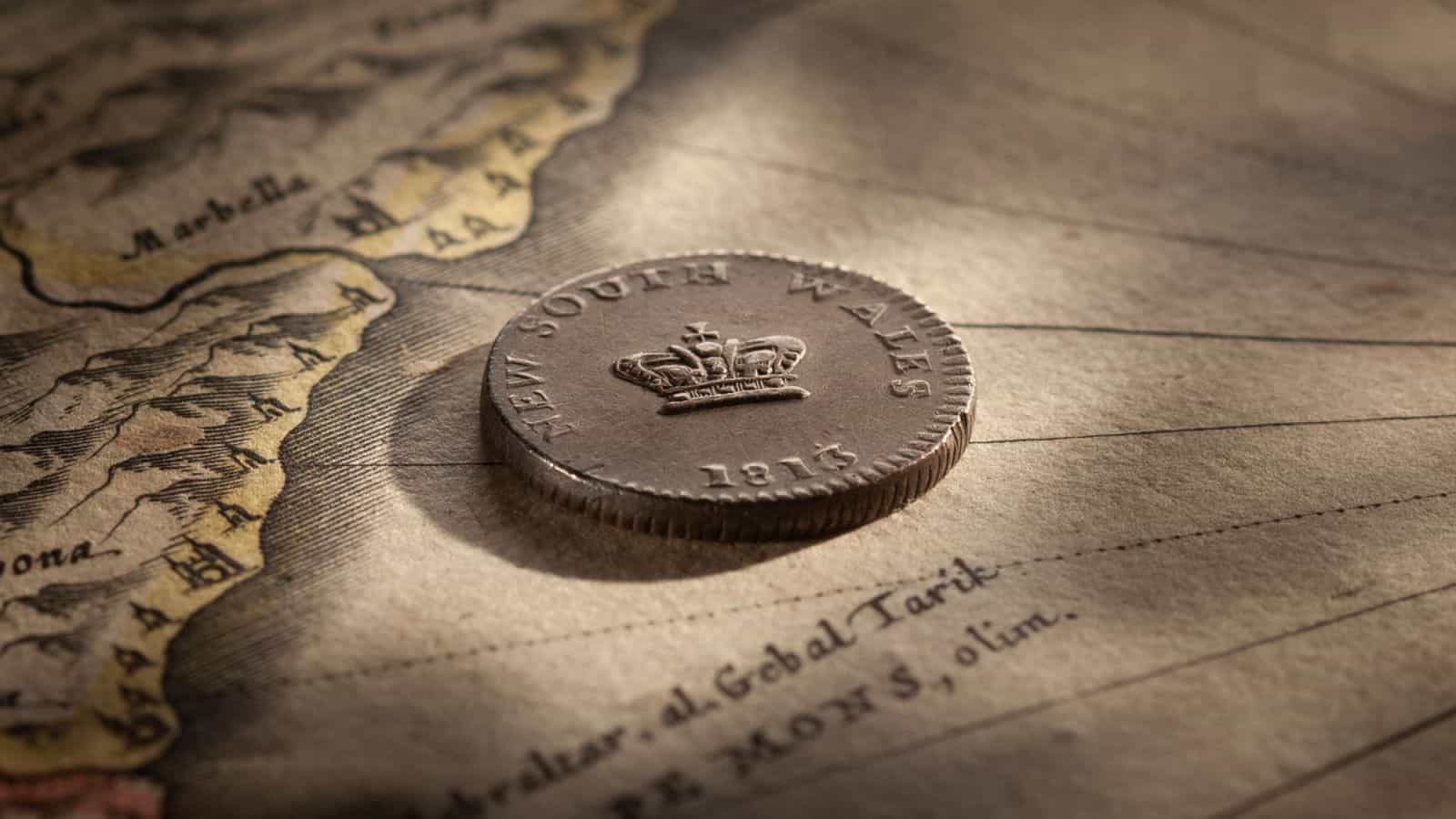 The partner to the 1813 Holey Dollar was the doughnut hole to the dollar’s doughnut. In other words, it was made from the silver cut out of the middle of the Spanish dollars. Its value was 15 pence, and it became known as a “Dump”.

The most sought-after examples have an “H” on the reverse, between the words “fifteen” and “pence”. The H signified Henshall, the man responsible for crafting the dies. For reasons unknown, only some of the dies carried his initial.

The edge of the coin also has “milling” – a pattern designed to show if anyone had shaved bits of silver off the coin.

This particular example has both the “H” and clear milling around the outside. It also has a dot above the “3” in the date, another rare feature. 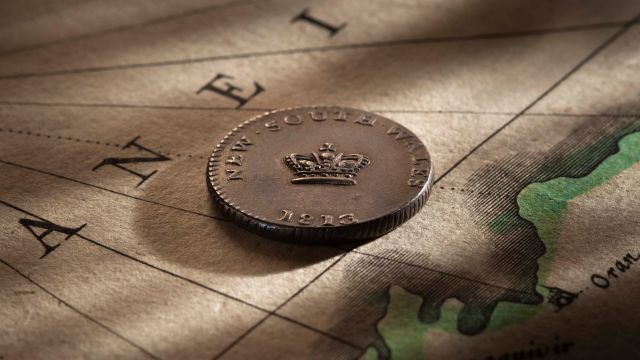 Four different dies were used to strike the 1813 dump. The A/1 die combination used in the version we’ve just seen is actually the most frequently found. They were used for about three quarters of the Dumps known to exist.

The D/2 dies account for about 20 per cent of the population. The rarest are the C/4 and E/3 dies. But they are very crude, possibly produced as test pieces prior to production.

This specimen uses the D/2 dies. They are the only dies where a cross is shown atop the orb in the design. The sought after “H” for Henshall is crisp and clear.

There’s also a full stop after the “New” and “South” in New South Wales. This is very rare, as the hollow depressions in the die used to form the full stop quickly became filled with dirt. It indicates that this was of the first coins to be struck using the dies. 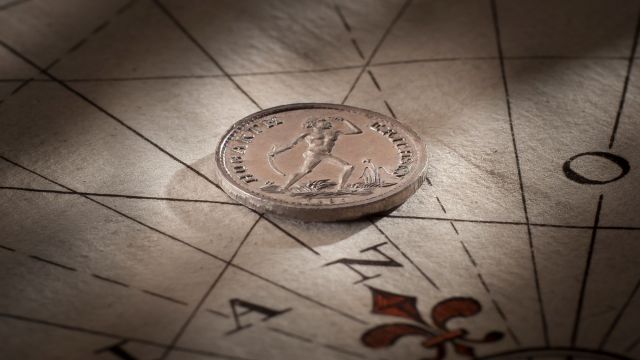 This 1860 coin saw the first ever representation of an Aboriginal Australian on coinage. It would be over 200 years before it was repeated, when a tribal elder appeared on the two-dollar coins produced for Australia’s bicentenary.

The design was sculpted by two Scandinavian jewellers, Julius Hogarth and Conrad Erichson. They had come to Australia to find gold. But having failed to do so, they set up a highly successful silversmiths in Sydney.

This particular coin is known as the “Marcus Clark”, after an earlier owner. It is considered the finest of the eight 1860 Aborigine threepences known to exist. It’s in mint state, and proof-like in quality.

This lovely sovereign was struck in 1899 at the Melbourne Mint. It carried the portrait of Queen Victoria commissioned to mark her diamond jubilee. And it was produced as a “coin of record”, an exceptional quality piece intended for the archives.

Only two coins of record are known to exist in private hands. Before it’s more recent sale, this one, in “brilliant and flawless” condition, had last changed hands in 1988. It had been bought then for AUS $9,000, considerably above its pre-sale estimate of up to AUS $6,000.

We hope you’ve enjoyed our tour of the most valuable Australian coins to have hit the market in recent years.

These small artefacts are much more than small pieces of copper, silver and gold. They’re miniature works of art, and tiny pieces of Australia’s history.

Whether you’re keen to buy, or just interested in what makes a coin valuable, we hope you’ve enjoyed learning more about them.