1880 was the second year in which the coin known as the “Morgan dollar” was minted. So is there anything special about that year? And how much could an 1880 Morgan dollar be worth?

We’re going to explore everything there is to know about the 1880 silver dollar value, history and key features. And we’ll also look into some of the interesting errors coins available.

History of the 1880 Silver Dollar

The so-called Morgan dollars were first minted in 1878, replacing the coins known as “Standing Liberty” dollars. They get their name from the man who engraved their designs, the Mint’s Assistant Engraver, George T. Morgan.

Morgan had come to the States from London to take up the role. He had been recommended by the Deputy Master of the Royal Mint there, C. W. Fremantle. And his appointment was to provide support to the Chief Engraver, William Barber.

The Morgan dollars were his first design. And they were to be produced in every year between 1878 and 1904. They were issued again in 1921. And in 2021, they were brought back to commemorate 100 years since the transition of the Morgan dollar to its successor, the Peace dollar.

Their composition was 90 per cent silver, with 10 per cent copper added for strength. Each coin measured 1.5 inches across and weighed in at just under 27 grams.

Millions of them were minted every year. In 1878 a new law, known as the Bland-Allison Act, had committed the Treasury to buying between $2 million and $4 million worth of silver every month. This silver was to be converted into coins.

The 1880 issue saw over 27 million coins struck. All the mint facilities were pressed into service. 12.6 million coins were minted in Philadelphia, almost 9 million in San Francisco, and well over 5 million in New Orleans. In addition, 495,000 coins were struck in Carson City.

Mintage figures stayed fairly steady each year until 1890. That year saw the repeal of the Bland-Allison Act. It was replaced by the Sherman Silver Purchase Act, which hugely increased the quantities of silver to be purchased by the Treasury.

The Sherman Act required 2 million dollar coins to be produced every month until 1891. But after that, mintages dropped sharply. In 1893, with inflation rampant and the economy in disarray, the Sherman Act was repealed.

The remaining silver in the Treasury’s stores was used to make Morgan dollars. When it finally ran out in 1904, the series came to an end.

Features of the 1880 Silver Dollar

The Obverse of the 1880 Silver Dollar 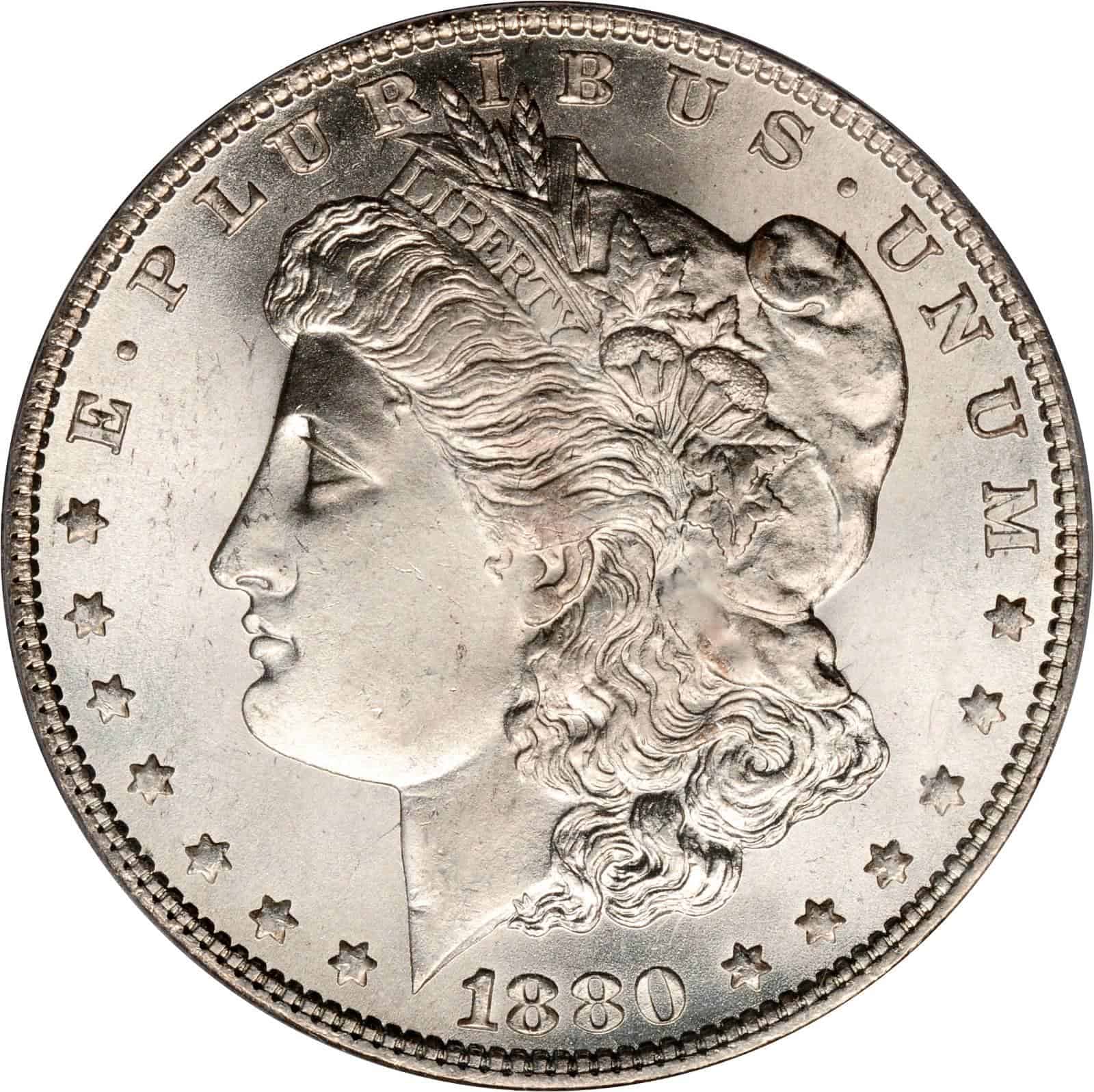 That face was to belong to a real woman – a teacher and philosopher from Philadelphia by the name of Anna Willess Williams. Anna had been recommended to Morgan by his friend, an artist called Thomas Eakins. Anna sat for Morgan on five occasions, and he pronounced her profile “perfect”.

The obverse of the coin carries the image of Lady Liberty facing left. Only her face and neck are shown. Her hair curls luxuriantly beneath a headband emblazoned with the word “Liberty” and decorated with leaves, flowers and ears of corn.

Her image is ringed in stars. The date appears beneath it and the words “E pluribus unum” are at the top. The motto is Latin, and it means “From the many, one”. It’s a reference to the many states forming the USA.

The Reverse of the 1880 Silver Dollar 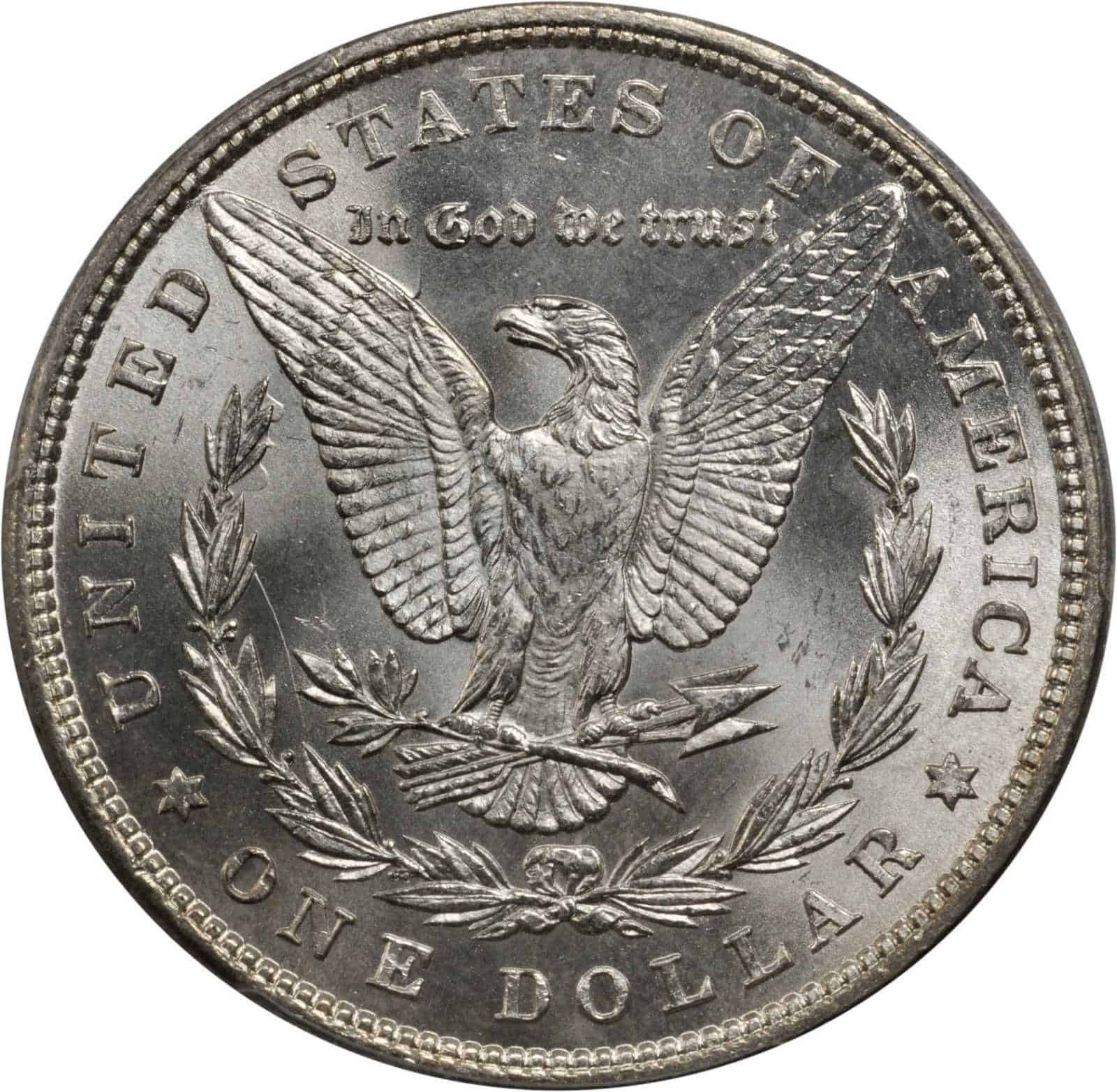 Turn the coin over, and you’ll see the majestic image of the bald eagle, symbol of America.

Two designs were produced for the reverse of the Morgan dollar, and both showed the eagle. The design by Morgan depicted an eagle perched on a bundle of arrows, its head tilted into the air and its beak slightly open.

The second design was produced by the Mint’s Chief Engraver, Barber. In this image, the eagle appears more static, almost like a heraldic device.

Both designs were submitted to the Mint Director, Henry Linderman. Linderman opted for Morgan’s offering. The design was slightly revised after a couple of weeks of coin production. The high relief meant that the dies were wearing out quickly, so the highest points were lowered.

Every eagle which had previously appeared on an American coin had had an odd number of tail feathers. The original image on the Morgan dollar, it was observed, had eight tail feathers. So the opportunity was also taken to revise this to seven.

The reverse of the coin has the name of the country at the top, and the denomination at the bottom.  Above the head of the eagle is the motto “In God we trust,” written in a Gothic style font.

The reverse also carries the mint mark if there is one. Coins minted in Philadelphia have no mint mark. For those minted in San Francisco, you’ll find an “S”, those minted in New Orleans have an “O”, and those from Carson City are marked with “CC”.

Other Features of the 1880 Silver Dollar

As with many other mintages of the Morgan dollar, there are a great many varieties of the 1880 dollar. The Professional Coin Grading Service, the PCGS, lists no fewer than 40 major, minor and die varieties for the Philadelphia dollar alone. That makes for fertile ground for collectors.

All the dollars have what’s known as a “reeded edge”. Turn them on their side and you’ll see a series of parallel grooves running at right angles to the coin surface. This was designed to prevent “coin clipping” – the fraudulent practice of slicing slivers of metal from the edge. 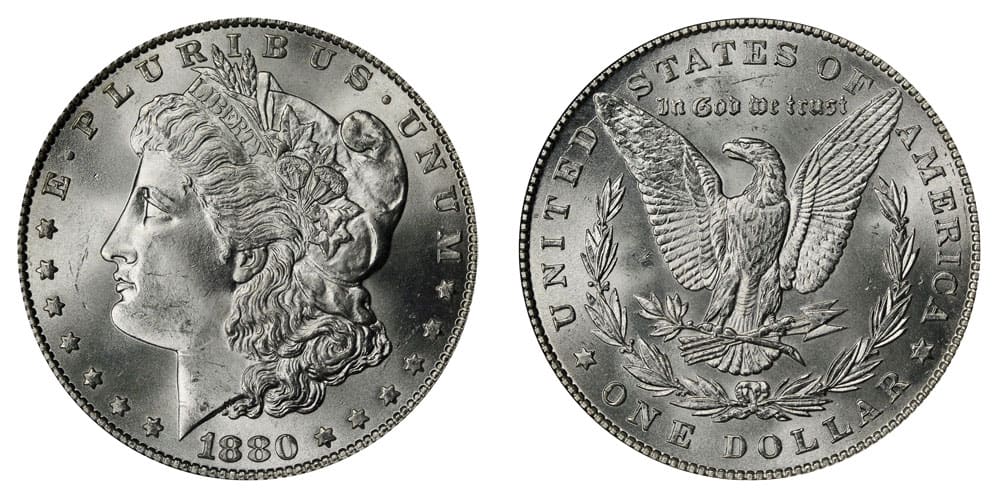 If your 1880 silver dollar was minted in Philadelphia, it won’t have a mint mark. Look on the reverse of the coin above the denomination. If there is a mint mark, it will appear just between the “D” and “O” of “dollar”.

1800 is a relatively common year for the Morgan dollar. That means most coins will be worth fairly modest amounts of money. A circulated coin graded XF45 is valued at around $50.

Values increase for uncirculated coins of higher quality. And if a coin has been designated “prooflike”  (PL) or “deep mirror prooflike” (DMPL), it will be worth more again.

At the highest grades, prices rise sharply. The finest known 1880 Philadelphia dollar is graded MS67, and that is valued at $60,000.

Like the Philadelphia dollar, the 1880 dollar was minted in large quantities in San Francisco. Nearly 9 million coins were struck.

At circulated grades, values are similar too. An XF45 coin will be worth around $50. But there are far more fine quality examples of the San Francisco dollar around. And that keeps a lid on values.

Even at MS67, a coin will just breach the four figure threshold. That’s because no fewer than 2,670 coins have been graded at that level by the PCGS. The value increases to just over $8,000 for a coin of the same grade with the DMPL designation.

It’s not until MS68+ that the numbers of graded coins reduce to double figures. The finest quality coins without a PL or DMPL designation known to exist are graded MS69. There are five of those. One was sold at auction most recently in 2021, netting $162,000. 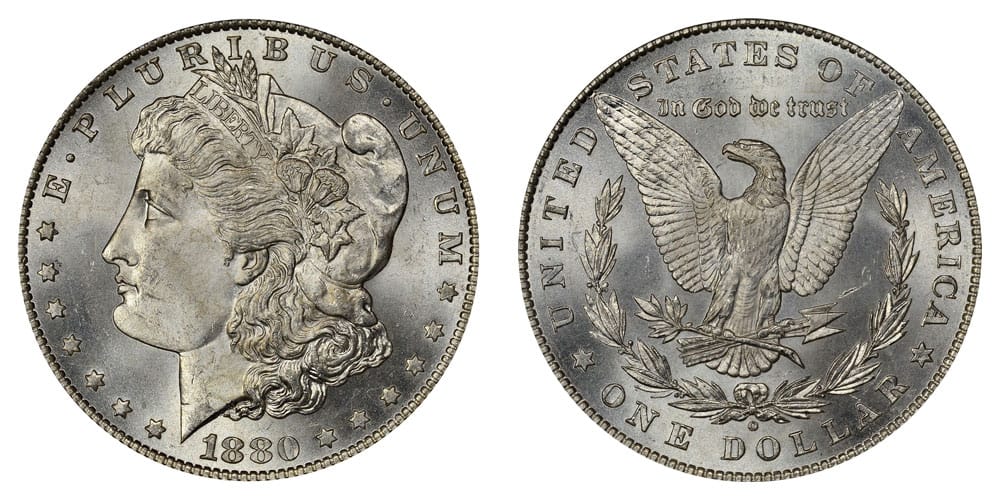 New Orleans Morgan dollars have an “O” on the reverse. Fewer of these were minted in 1880 – just over 5 million.

That’s reflected in a small premium for circulated coins. A coin graded extremely fine, XF45, is valued at $53, against $50 for the Philadelphia and San Francisco minted dollars.

But finding a fine quality example is much harder. And prices for premium coins with a PL or DMPL designation are amongst the highest for any 1880 Morgan dollars.

Prices for a deep mirror prooflike, even half a grade lower, are even higher. An MS65DMPL is valued today at $70,000. 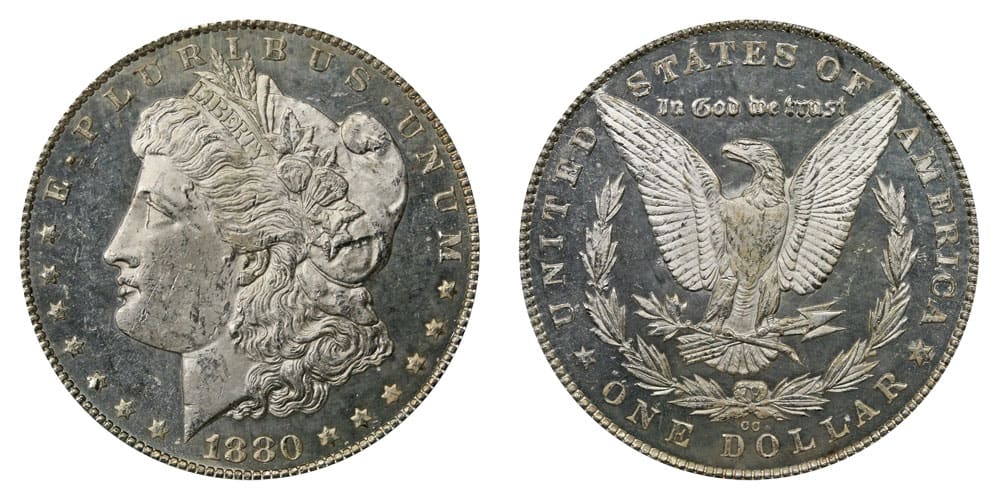 Carson City Morgan dollars of any year are a real favorite with collectors. That’s because so few coins were struck there compared to the other mint facilities.

In 1880, the Carson City facility struck just 495,000 coins. You can spot one by looking for the letters “CC” above the denomination on the reverse.

There are a wide range of different varieties too, providing plenty of interest for collectors. But there are still quite a large number of coins in existence. As of 2011, the PCGS had certified no fewer than 17,000.

The finest known example is graded MS67, but it isn’t prooflike. Its value today is around $22,000.

There is a huge number of different varieties of 1880 Morgan dollars. For the Carson City mintmark alone, the PCGS lists 15 major varieties, three minor, and 15 die varieties.

Amongst these are coins from the “GSA Hoard”. This was a cache of around three million uncirculated silver dollars held by the Treasury and sold between 1972 and 1980. “GSA” stands for the “General Services Administration” which handled the sale.

There’s relatively little information on the value of coins from the GSA hoard. But one 1880 Carson City dollar graded MS64DMPL sold in 2008 for just under $5,000.

The large quantity of coins minted in 1880 also means that there are a number of interesting error coins on the market.

Another overdated coin from San Francisco, a slightly different variety, sold at auction in 2019 for $48,000.

This YouTube video from Couch Collectibles takes you through a range of different error coins. And it includes a great close-up of an 1880 silver dollar showing an overdate of a “7” with an “8”.

What makes an 1880 silver dollar rare?

When it comes to mintmarks, the rarest 1880 silver dollars are those from Carson City. But at the very highest grade, any coin can become rare. Exactly what grade that is differs between the different coin varieties and mint facilities.

For coins struck at New Orleans, for example, a dollar of MS65 quality is extremely rare. While for Philadelphia dollars it’s not until MS68+ that coins become really rare.

Which 1880 silver dollar is worth a lot of money?

In coin collecting, rarity equals value. In uncirculated grades, coins minted in Carson City are more valuable than others.

But the fewer examples there are of any specific coin, the more valuable those examples will be. Error coins can fetch huge prices. And one of the most expensive 1880 silver dollars ever sold was minted in San Francisco. It was graded MS69 and sold at auction for over $160,000.