1879 was the second year of issue of one of the world’s most collectible coins, the Morgan silver dollar.

So how much is one of these coins worth? And what key criteria determine its value? That’s what we’re here to find out!

We’re going to look at the 1879 silver dollar value, as well as its history and key features. Step this way to find out more …

History of the 1879 Silver Dollar

1879 was only the second year of the minting of what became known as the Morgan dollar. Its nickname comes from the man who designed both the obverse and reverse, an Englishman called George T. Morgan.

The Morgan dollar replaced the Standing Liberty dollar. It was made from silver, with one tenth copper included in the mix to make it more resilient. Each coin had a diameter of 1.5 inches and weighed just under 27 grams.

Its creation went alongside the passage of new legislation, the Bland-Allison Act, which became law in 1878. It committed the Treasury to buying between 2 and 4 million dollars’ worth of silver every month. And that silver was to be used to make coins.

That meant that Morgan dollars were produced in large volumes. 1879 saw just over 27.5 million coins minted. And to keep up with that demand, all of the mint facilities were pressed into use. You can find Morgan dollars struck in Philadelphia, New Orleans, Carson City and San Francisco.

By far the highest number were struck in Philadelphia. The next highest volume came from San Francisco, which struck over 9 million coins. New Orleans minted just under 3 million, while Carson City minted 756,000.

All four mint facilities continued to strike Morgan dollars every year until 1904. They were revived for a single year in 1921, 15 years after the establishment of the mint facility in Denver. 1921 Morgan dollars are, therefore, the only ones from the original issue to carry a Denver mintmark.

It was decided to mint more coins in 2022, but issues with silver supply put the plans on hold.

Features of the 1879 Silver Dollar

The Obverse of the 1879 Silver Dollar 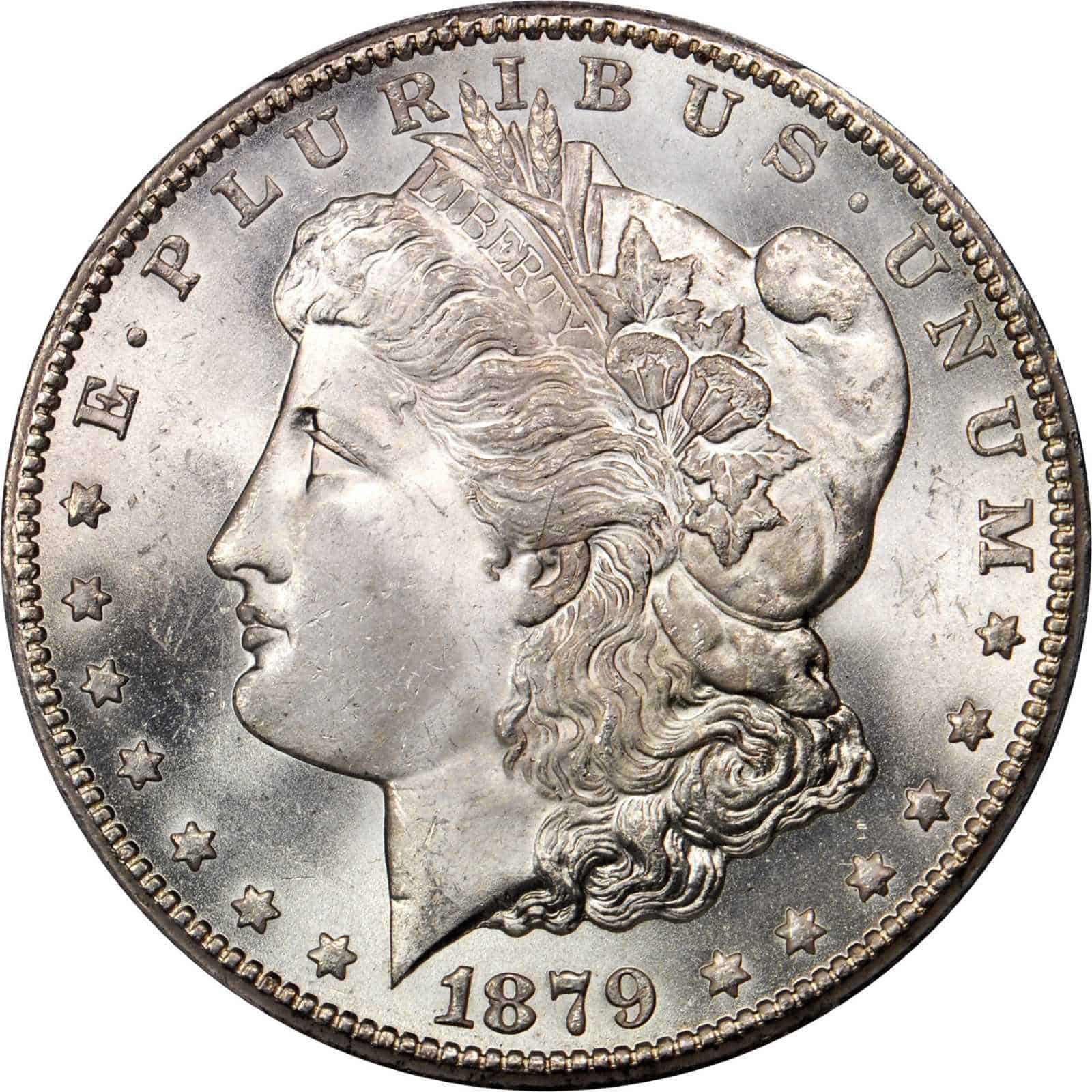 The obverse – or “heads” side – of the Morgan dollar carries the image of Lady Liberty. It’s a continuation from the design that preceded it, known as the “Standing Liberty”. But in this case, only Liberty’s head and neck are shown.

There’s another difference too. Traditional images of Liberty had been in classical Greek style. But for this one the designer, George Morgan, used the face of a real woman – and an American woman, at that.

She was Anna Willess Williams, and she was introduced to Morgan by his friend, the artist Thomas Eakins. Eakins was a friend of Anna’s father, and the young Anna had sat for several paintings for him.

Anna agreed that Morgan could use her profile for the image as long as she remained anonymous. But sadly for her, that was not to be. A Philadelphia newspaper revealed her name, and she quickly became known as the “silver dollar girl”.

Some accounts have it that the publicity caused her a lot of trouble, including losing her job and her fiancé. Whether or not that’s true, Anna didn’t publicly comment on the matter.

At least the results were to Morgan’s liking. Anna sat for him on five occasions, and he pronounced her profile “perfect”.

Her image appears facing left on the coin, surrounded by a ring of stars representing the states. There’s a tiny “M” for “Morgan” at the base of her neck. The date appears at the bottom, and the Latin motto “E pluribus unum” – meaning “From the many, one” – is at the top.

The Reverse of the 1879 Silver Dollar 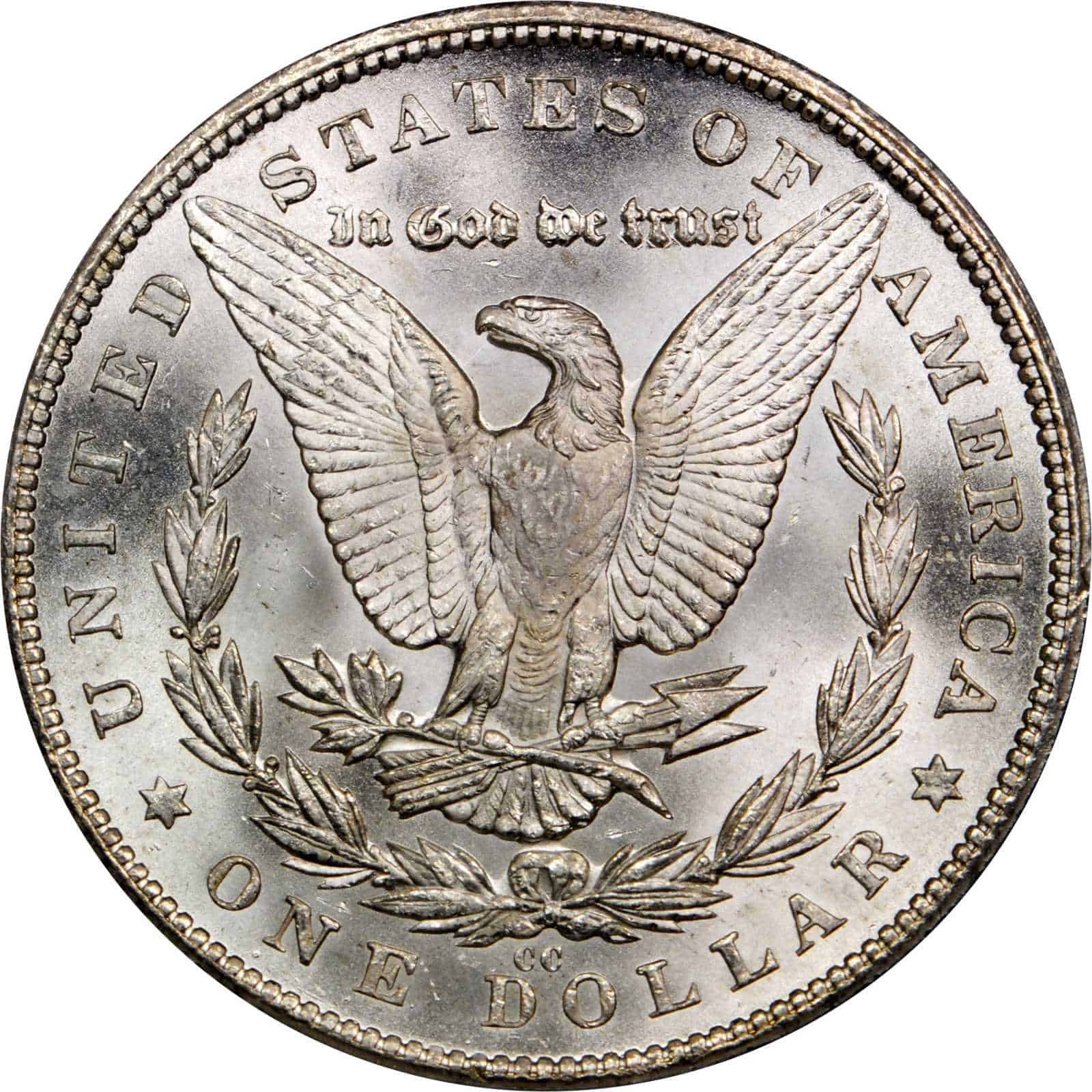 The reverse also carries a design by Morgan, a bald eagle with outstretched wings. The bird’s head is raised, and it perches on a bundle of arrows. A laurel wreath surrounds most of the image, while the tips of the eagle’s wings stretch almost to the edges of the coin.

Around the top of the coin are the words “United States of America”, curved in line with the coin edge. Below it, written on the horizontal, is “In God we trust”. The denomination is at the bottom of the coin.

Unless the coin was minted in Philadelphia, the reverse also carries the initials of the mint facility. These appear at the bottom, above the “D” and “O” of “DOLLAR”. “CC” denotes Carson City, “O” New Orleans and “S” San Francisco.

Other Features of the 1879 Silver Dollar

No proof coins were made in 1879. But Morgan dollars in mint state may have the designation “PL” or “DMPL”. These stand for “prooflike” and “deep mirror prooflike”, and they’re used for coins of exceptional detail. Deep mirror prooflike coins also have a pleasing contrast between glossy fields and frosted designs.

The edge of the coin is “reeded” – a series of parallel grooves that run perpendicular to the faces of the coin. This was intended to prevent “coin clipping”, cutting off slivers of silver.

This YouTube video from ModernMiner takes you through all the design features of the Morgan dollar. 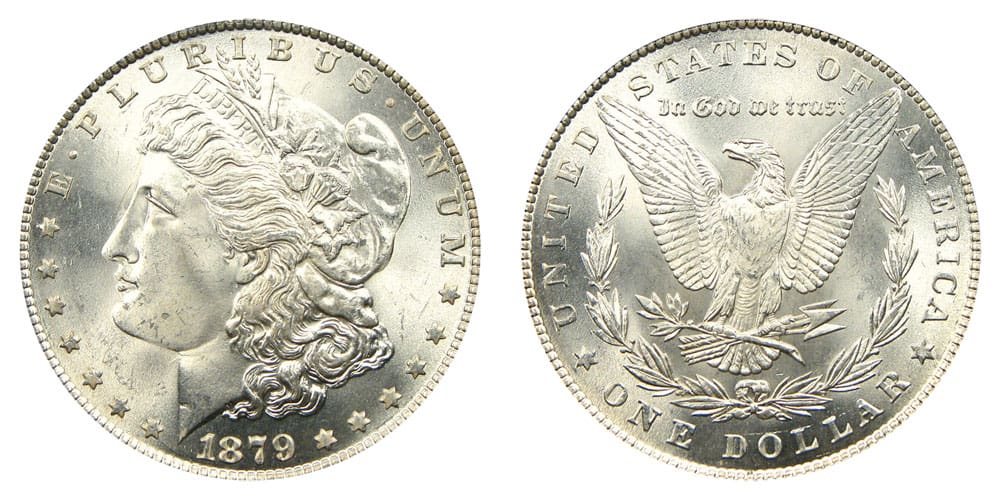 The silver Morgan dollars minted in Philadelphia – the ones without a mint mark – are readily available even over 100 years later. That’s because they were made in very large numbers – over 14 million were struck in 1879 alone.

While lots of them were later melted down, finding uncirculated coins is still not particularly difficult. And you can pick up a nice example, graded XF45, for about $50. (The XF here stands for “extremely fine”).

If you’re looking for an uncirculated – or “mint state” – coin, you’ll need to pay more. An MS63 coin will be worth around $150. And a gem quality coin – those graded 65 or above out of a possible maximum of 70 – are worth more again.

Prices rise steeply at MS68+, where the number of available coins dips into double digits. And the finest examples are graded MS67, and worth about $43,000. 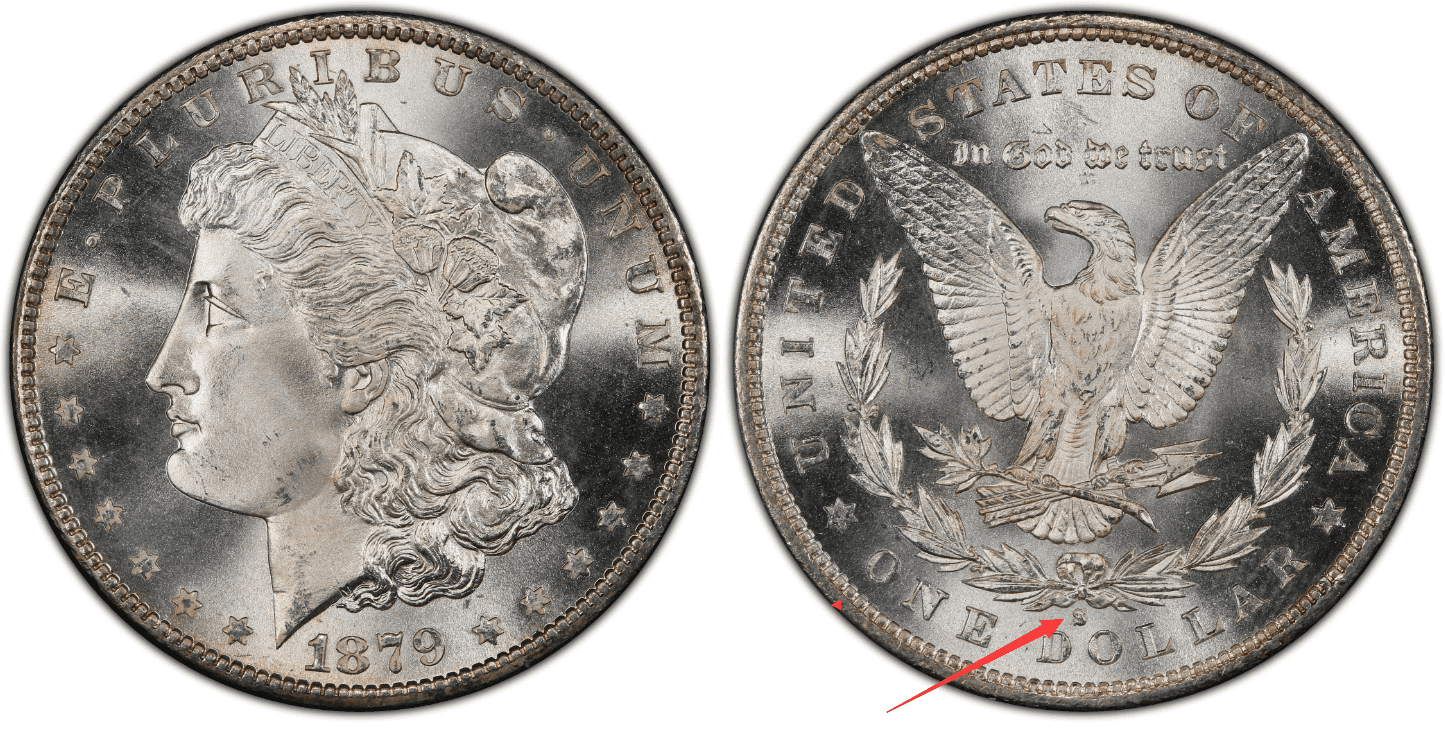 In 1879, far fewer coins were minted in San Francisco than in Philadelphia. But prices for mint state coins are generally lower with this mint mark. So why is that?

It’s because a large proportion of those coins weren’t released from the Mint at the time. Instead, they were issued over the decades. And man were offered for sale by the Treasury in the 1960s.

As such, there’s a strong supply of good quality mint state 1879 dollar coins from San Francisco. And that keeps prices relatively modest.

Even an MS67 example will be worth only around $1,100. Decent money, certainly, but it hardly compares to the $43,000 price tag on a Philadelphia coin of the same grade.

The 1879 S includes two different reverses. Some have the reverse from 1878, which has an eagle with a flat breast, and a flat feather on top of the bundle of arrows. An auction record was set in 2005 for a coin of this type graded MS66. It fetched $63,500.

In circulated grades, 1879 dollars struck in New Orleans are worth about the same as those struck in Philadelphia and San Francisco. An extremely fine coin is worth about $52.

There are plenty of examples of coins in mint state graded from MS60 to MS62. They become slightly scarcer at MS63, but there are still estimated to be between 20,000 and 30,000 survivors. As such, the value is around $110.

But at MS65 and above, the numbers fall sharply. Only between 350 and 500 coins are believed to exist. The finest examples to be graded by the PCGS are seven coins at MS66+, valued at about $30,000 each. 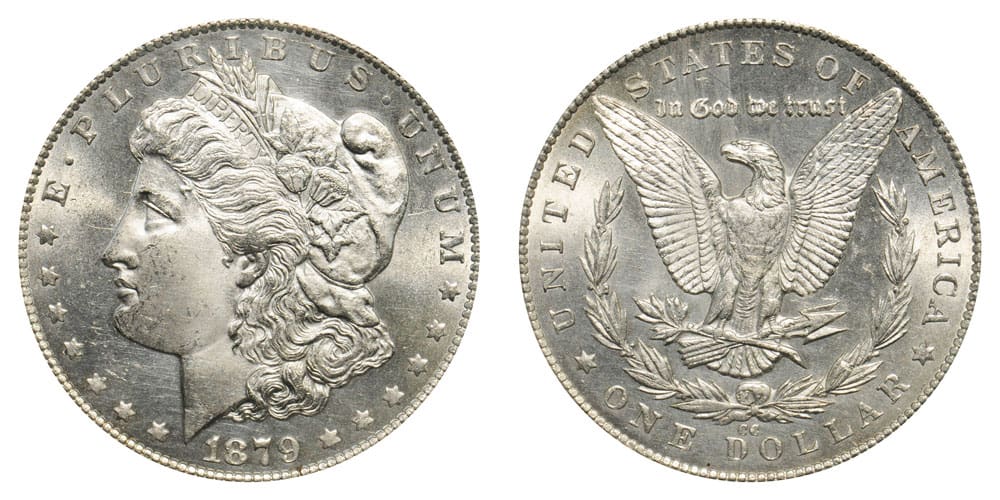 Carson City dollars were minted in smaller numbers than those from the other mint facilities. And their Wild West location gives them a romance that sees them highly valued by collectors.

An extremely fine circulated CC dollar (XF45) is valued at $2,400. There are hundreds of coins graded MS63, but keen demand for this mint mark means they’re still worth over $9,000 each.

There are two varieties of 1879 CC dollars, one with a mint mark that appears normal and one that looks rusty. The latter is sometimes known as the “capped die” or the “capped CC”.

The finest known examples with a normal mint mark are graded MS66+. Two such coins have been graded at this level, and they’re each valued at $290,000.

For the capped die variety, none have been graded finer than MS65+. Five are known to exist at this top level, and they’re valued at $62,500 apiece. 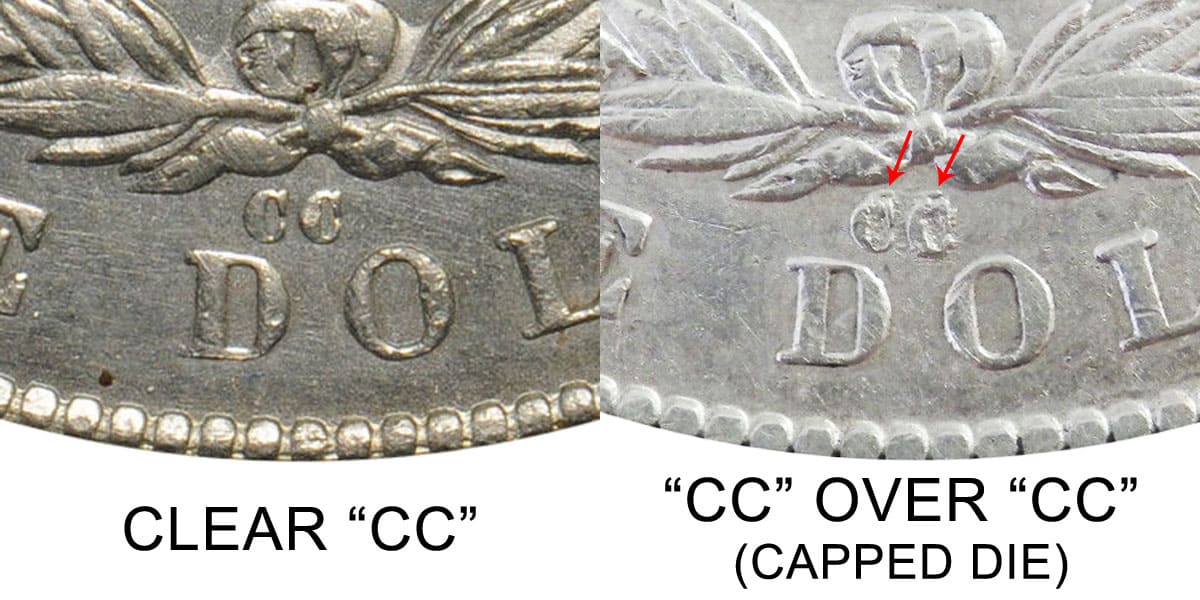 A capped die occurs when a coin sticks to the die when it’s struck. The die, with the coin attached, then goes on to strike other planchets.

The 1879 capped die coins struck in Carson City have distinctive rust from the die cap which appears around the mint mark. They’re much sought after by collectors.

And they feature a second error, what’s known as an “over mint mark”. A smaller “CC” was later effaced by a larger “CC”. The rust around the mint mark, however, makes this difficult to see.

The upsetting mill is an early stage in coin preparation. It creates the raised rims on both sides of the blank.

One 1879 dollar struck in San Francisco found its way back into the upsetting mill. This unusual mint error appeared on a coin graded MS61, and it sold at auction for over $8,000.

Another error to appear in a San Francisco dollar is the uncentered broadstrike. This occurs when a planchet is poorly positioned and ends up being struck outside the collar intended to hold it in place.

If the design is nevertheless fully present on both sides of the coin, it’s known as an uncentered broadstrike. If part of the design is cut off on one or both sides, it’s an off-center strike.

An example of an uncentered broadstruck 1879 S dollar, graded MS64+ and designated prooflike, sold at auction for $3,800.

For more details on 1879 Morgan dollars with errors, check out this YouTube video from Couch Collectibles.

Some mintmarks of 1879 silver dollars are rarer than others. The rarest in circulated grades are the Carson City dollars. And those with the “O” mintmark for New Orleans are slightly rarer than those struck in Philadelphia or San Francisco.

The higher the grade, the rarer the coin. Prooflike examples are more scarce, and coins designated “deep mirror prooflike” are about twice as rare again.

Where is the mint mark on an 1879 silver dollar?

Look for the mint mark on the reverse of the coin, the side with the image of an eagle. If one is present, it will appear as one or two letters just above the “D” and “O” in “DOLLAR”. If there’s no mint mark, it’s not an error – the coin was struck in Philadelphia, which didn’t use mint marks.