2009 was a very unusual year in the history of the penny. The bicentenary of Lincoln’s birth saw not one, but four new coin types minted to mark the occasion. But just how much are they worth today?

We’re going to look at the 2009 penny value. And we’ll also learn more about the designs, and what marks out a particular coin as interesting to collectors.

Read on to find out more!

* All values given are for coins designated as red.

2009 marked the 200 year anniversary of Abraham Lincoln’s birth. It was also the year set by the 2005 $1 Coin Act for the redesign of the cent’s reverse.

Not one but four different reverse designs were produced, each marking a different stage in Lincoln’s life.

The “Early years” coin featured a log cabin and the year 1809, the year in which Lincoln was born in Kentucky. The design gave it it’s nickname, the “log cabin penny”. The cent was launched on Lincoln’s birthday, February 12, at a high school in Hodgenville, the town of his birth.

The next coin in the sequence was the “Formative years” design. This showed Lincoln as a young man, his shirt sleeves rolled up. He is seated on a tree trunk, reading a book. A mallet resting near his knee shows that he has taken a break from his work rail splitting.

This coin was nicknamed the “Indiana penny”. Although there is nothing in the design to pinpoint its geographic location, Indiana was where Lincoln spent his formative years.

The third design referred to Lincoln’s professional life. It shows a formally attired Lincoln standing outside the State Capitol in Illinois, where he lived from 1830 to 1861. Its nickname is the “Illinois penny”.

The final design marked Lincoln’s presidency. It is the only reverse design of the series not to feature Lincoln himself. Instead, it shows the half-finished dome of the United States Capitol.

All four coins were released as uncirculated copper collectors’ coins. These had the same metal composition as the original cents minted in 1909: 90 per cent copper, and 5 percent tin and zinc.

Larger numbers of the coins were produced for circulation. These were made of 97.5 zinc with a copper coating, making them far less expensive to produce.

After the series concluded, the reverse was changed to a new design. Known as the “Union Shield”, this celebrated the unity of the states, which Lincoln had gone to such effort to preserve. 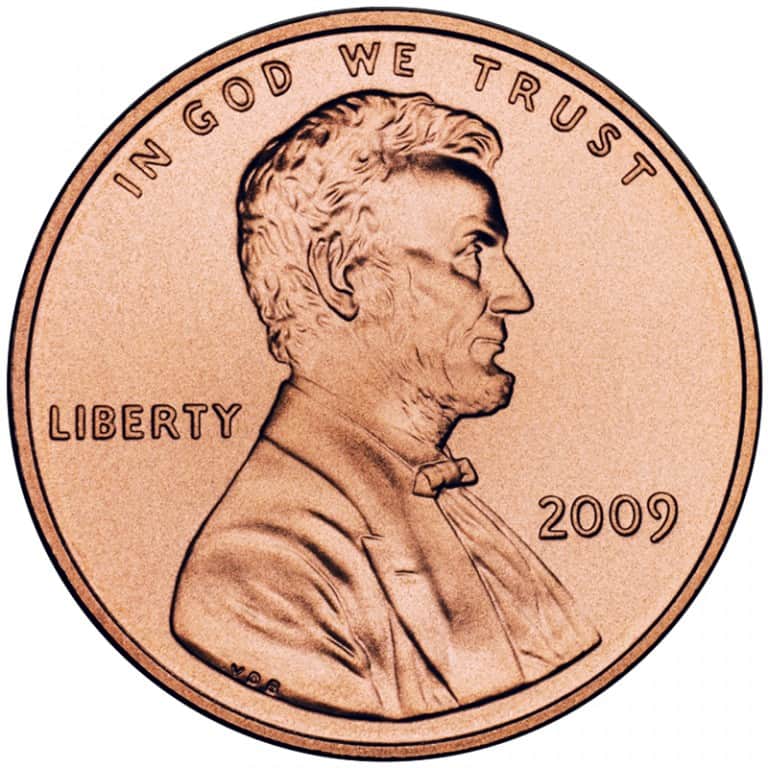 The obverse of the 2009 penny bears the same image of Lincoln that has appeared on every cent since 1909. The original had marked a major departure for US coins – until then, only Lady Liberty had appeared on the currency.

In the past, the idea of portraying real people on coins had met with general disapproval. But the centenary of Lincoln’s birth led to a change of heart. The idea of Lincoln appearing on a coin gained popular support.

The image on the obverse shows the familiar bust of Lincoln in profile. And just like the 1909 penny, the 2009 version carried the motto “In God we trust” above. The word “Liberty” appears to the left, behind the nape of Lincoln’s neck. And the date and mint mark appear on the right.

The Reverse of the 2009 Silver Dollar 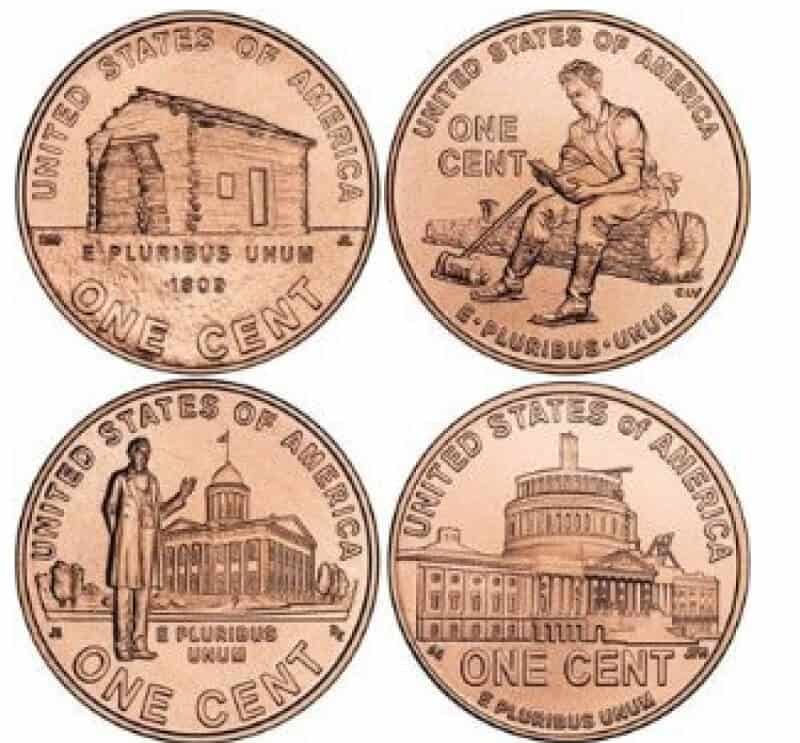 Four different designs were produced for the reverse of the 2009 pennies. Each showed Lincoln at a different stage of his life: early years, formative years, in his professional life, and as president.

The reverse of the early years coin, also known as the “log cabin” coin, was designed by Richard Masters and sculpted by Jim Licaretz. The initials of both men appear in the design.

The reverse of the formative years coin was designed by Charles Vickers. The image of Lincoln taking a break from his work splitting rails in order to read is a poignant one. Lincoln came from humble beginnings and was mostly self-educated.

The job of designing the professional life coin reverse went to Joel Iskowitz. The design was sculpted and engraved by Don Everhart.

And the presidency coin was designed by Susan Gamble and sculpted by Joseph Menna. It was the only reverse not to include Lincoln himself. The message was perhaps that the office of president was greater than any individual.

All four reverses have the words “United States of America” curving around the top. But while they all also carry the denomination and the Latin motto “E pluribus unum”, the positioning of these features varies.

The early years and professional life coins have the Latin motto beneath their central images. And for these designs, the denomination curves around the bottom edge.

In the formative years design, the denomination is to the left of the image of Lincoln, while the motto is at the bottom.

And in the presidency design, the denomination is printed horizontally beneath the image of the Capitol. It is the motto, “E pluribus unum”, which curves around the bottom.

Other Features of the 2009 Penny

The color of copper coins, including the 2009 penny, is important to their value. When brand new, copper has a red tone. But as it’s handled or comes into contact with the air, that color moves towards brown.

Red coins – namely those which have a red tone over at least 95 per cent of their surface area – are the most valuable. Next come coins designated red-brown, while brown coins are usually less expensive. (The values set out here are all for red coins.)

Take a look at this YouTube video from BigDCoins to look at all four 2009 penny designs. 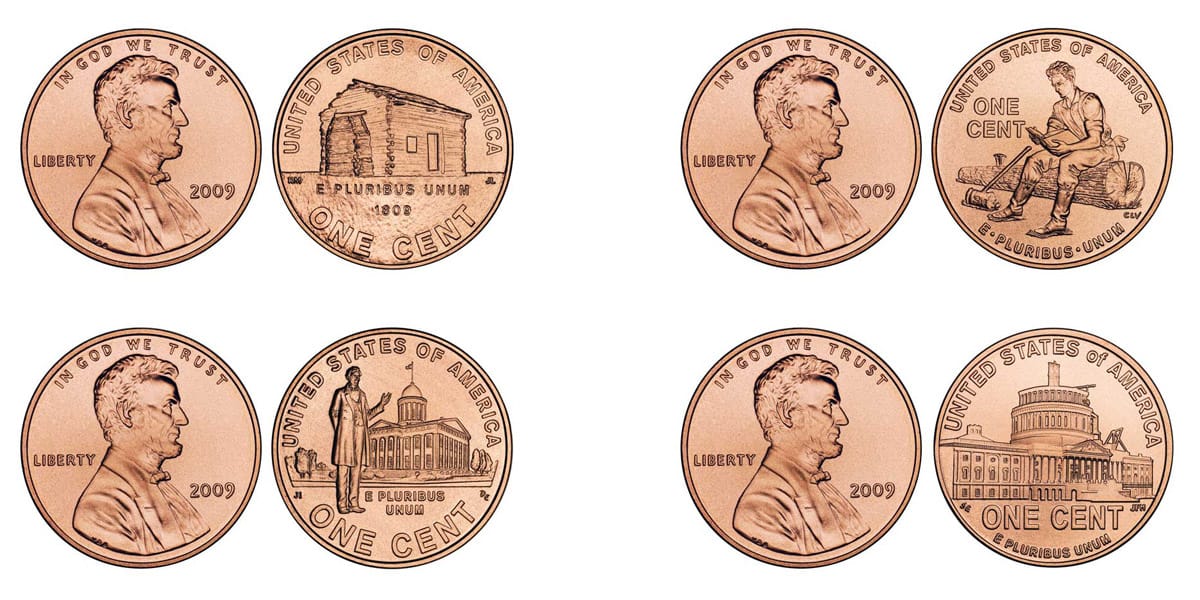 The plentiful supply of older coins and rocky economic conditions combined to keep a lid on numbers. But circulated coins are still easy to pick up, and generally not worth more than their face value.

Uncirculated coins, however, are worth considerably more. The higher their quality and condition, the rarer they are, and the higher the price they will fetch.

A 2009 Philadelphia penny graded MS63 is worth between $5 and $7, whatever reverse design it has. Values stay similar for all the designs until you reach the MS67 mark.

A 2009 P penny graded MS67 and with the presidency design is worth about $135. That rises to $225 for the early childhood coin, and $300 for the professional life version. The most valuable design at this grade is the formative years reverse, which is worth about $375.

Some “special strike” coins were also produced with a satin finish. Again, values for the different designs differ, depending on their rarity.

An early childhood coin graded MS69 will be worth about $60. But the finest known formative years special strike coin is graded MS68. It’s the sole example and worth around $3,500.

Some pennies were also presented at the “first day” ceremony to mark the issue of the bicentennial coins. At the time of writing, one such coin, graded MS68 by the NGC, was being offered for sale on eBay for $800. 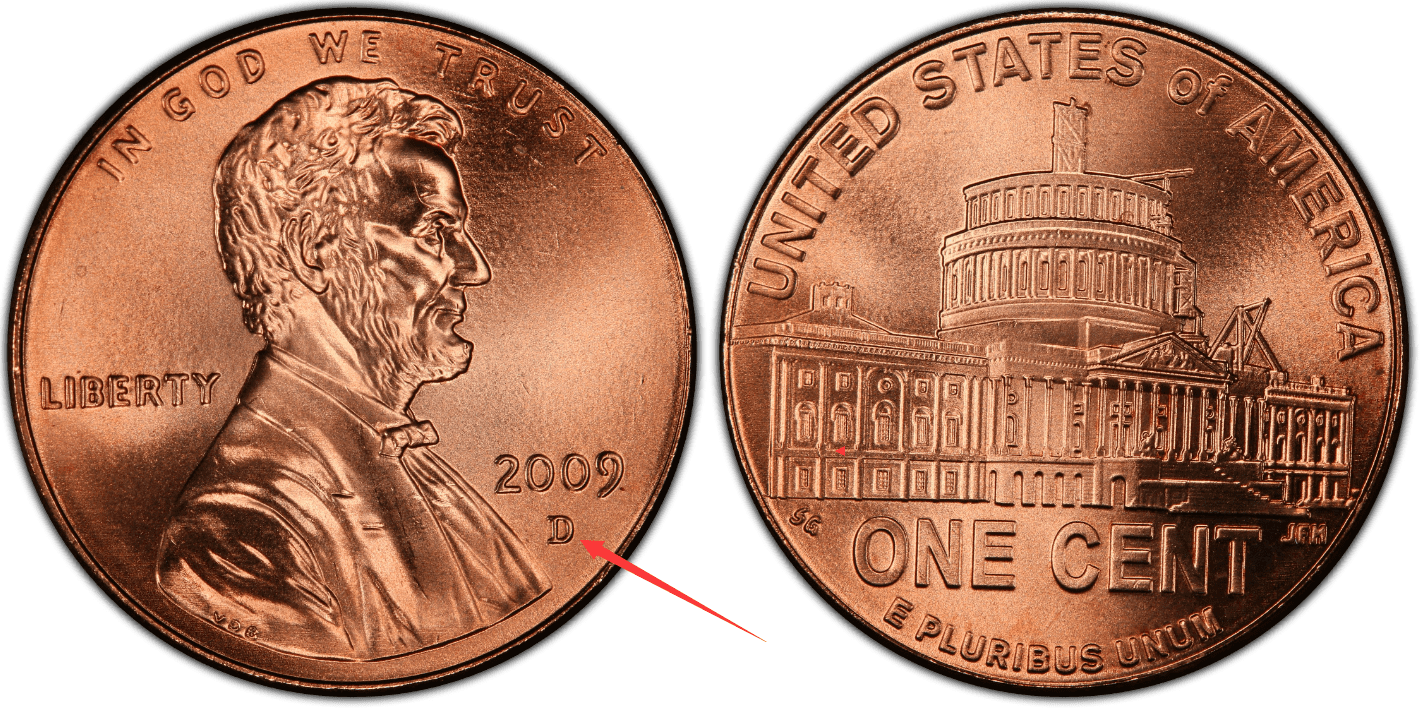 The Denver mint facility struck even more pennies in 2009 than the facility at Philadelphia – 198 million of them.

The prices for mint state coins up to MS65 are about the same as for those struck in Philadelphia – between $5 and $12. But at MS67 and above, there is more variation.

An MS67 Denver penny with the formative years reverse is worth about $180. But a penny of the same grade with the professional life reverse is worth $700. And the two known examples of an MS68 presidency penny from Denver are worth around $6,000 apiece.

Denver also produced special strike coins with a satin finish. The auction record for one of these was set in 2011 for a Denver penny graded SP69. It fetched a shade under $300. 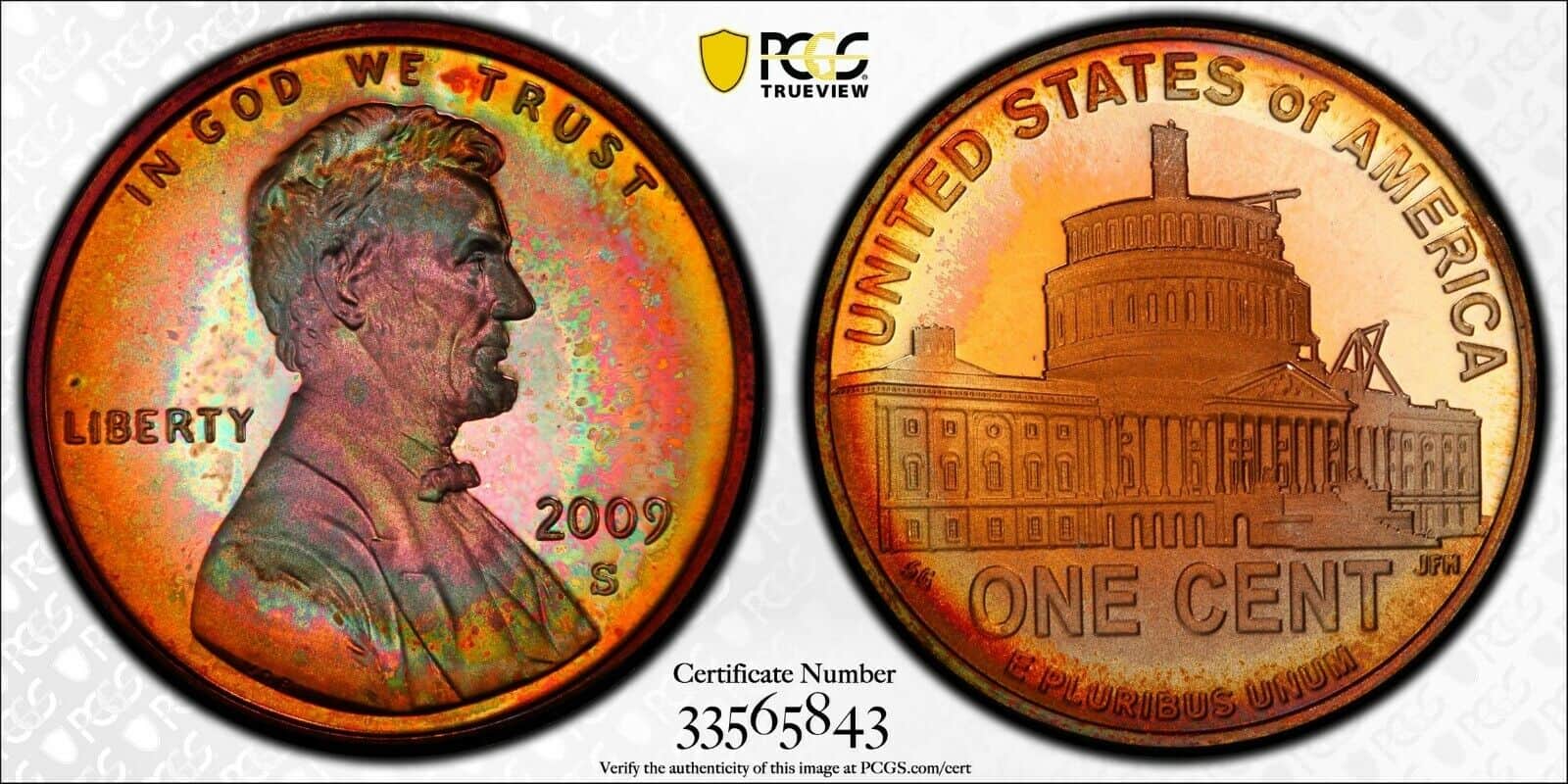 The San Francisco mint facility only produced proof coins for collectors. They struck about 2.2 million sets of proofs, one of each reverse design.

As with mint state coins, these were always intended as collectors’ items. And for that reason, they will almost all have been carefully stored, remaining in excellent condition. So they’re not scarce – which means they’re not hugely valuable either.

Modern coin production is a slick operation. But nonetheless, some errors do occasionally occur. And because they’re so rare, error coins can be valuable.

The Lincoln early years design has some examples of doubling. To spot these, you’ll need to examine the log cabin with a coin loupe or magnifier. Look for doubling on the circular ends of the logs at the front corner of the cabin.

These error coins aren’t, however, particularly valuable. Good quality examples are worth only around $10.

A number of double die errors can be identified on the reverse of the 2009 proofs. The design, you’ll remember, shows Lincoln seated on a fallen tree trunk, reading a book.

Look closely at the fingers holding his book. If you see an extra thumb or index finger, you have an error coin. (The different varieties are coded FS-802 and FS-806.) A coin with this error in almost uncirculated condition will be worth about $5. And at MS64, it will be worth around $50.

There are also a number of double die errors on coins with the professional life reverse design.

One of these has doubling on the columns of the Illinois Capitol building. At the time of writing, there’s no sale information to assess the value of this error.

The proof coins struck in San Francisco also have some errors. One such coin was horizontally misaligned in the press, resulting in an uneven rim around the design. The red coin, graded PF68 and with the “ultra cameo” designation from the NGC, sold at auction for $345.

This YouTube video from Couch Collectibles looks at a number of 2009 penny errors in more detail.

Is there anything special about a 2009 penny?

The mintage was much lower than the previous year. And unusually, four different designs were produced for the reverse, each one marking a different stage in Lincoln’s life.

The log cabin penny is the nickname for the Lincoln penny with the reverse design illustrating his early years. It shows a humble log cabin, similar to the place Lincoln is likely to have been born.

In circulated grades, it’s worth only its face value. If it’s a double die reverse error coin, it will be worth around $5, depending on its grade.

The most valuable examples are the highest quality mint state coins. For a Philadelphia log cabin penny, that will be a coin graded MS67+. That’s worth about $850.

And for a Denver coin, the highest available grade is MS67. The PCGS have graded just under 80 coins at this level, and they’re worth about $450.

I have 2 can you help me see their story/ value. Thank you and Happy Thanksgiving 🌹