The Westward Journey nickel series was a program that included commemorative coins minted in 2004 and 2005. The goal was to honor the 200th anniversary of the first expedition after the Louisiana Purchase (1804 to 1806) with two Jefferson nickel types made with two different reverse designs.

Both variations, the one with Ocean in view and the other with American bison (buffalo), were made after Jamie Franki’s idea. These coins also have a different obverse designed by Joe Fitzgerald, including Thomas Jefferson’s image and the stylized word Liberty. The 2005 Buffalo nickel value depends on the coin preservation level and possible errors.

History of the 2005 Buffalo Nickel

The 2005 Jefferson nickel is unique in many ways. It includes the new President’s image on the obverse and the two reverse variations, including:

That was the first time the US Mint made any change to the President’s profile. The idea was to honor the 200th anniversary of the Lewis and Clark Expedition that way.

The commission had the difficult task of selecting the three unique images for this coin type among the 144 designs proposed. However, this design lasted only that particular year, and the Monticello took its place on the nickel’s reverse again the following year.

Artist Joe Fitzgerald designed Jefferson’s image and the impressively handwritten word LIBERTY on the obverse. He also created the inscription OCEAN IN VIEW! O! THE JOY! for the second coin’s reverse variety.

He took these words from William Clark’s journal, where he described his reaction to the Pacific Ocean coast after a long journey from St. Louis.

Artist Jamie Franki came up with the GRAZING BUFFALO reverse design, symbolizing American Indians and wildlife Lewis and Clark met during their expedition.

The US Mint sculptors and engravers Donna Weaver, Don Everhart, and Norman Nemeth got the honor to create these beautiful coins. Even though the 2005 Buffalo nickel lasted only one year, it is still one of the most collectible modern American coins.

Features of the 2005 Buffalo Nickel

As you probably know, the US Mint produced five-cent with an Indian on the obverse and American buffalo on the reverse from 1913 to 1938.

The obverse of the 2005 Buffalo nickel 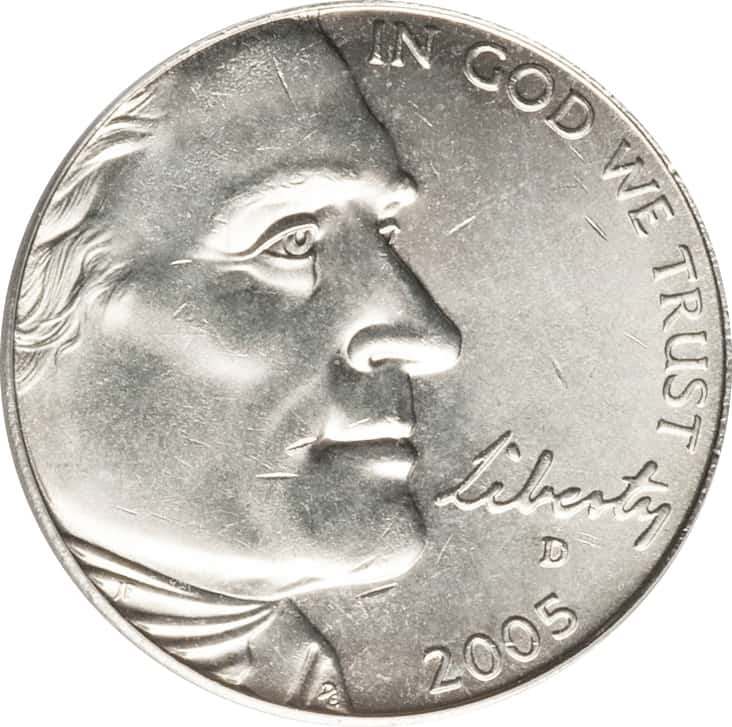 The 2005 Buffalo nickel has a magnified Jefferson’s image facing right. Joe Fitzgerald wanted to show him from a different perspective and did an excellent job with this coin.

The inscription IN GOD WE TRUST and the date 2005 were struck along the right coin rim. Curiosity about this piece is the word LIBERTY written based on the President’s handwriting. The used cursive calligraphy style is a rarity in American coinage.

The reverse of the 2005 Buffalo nickel 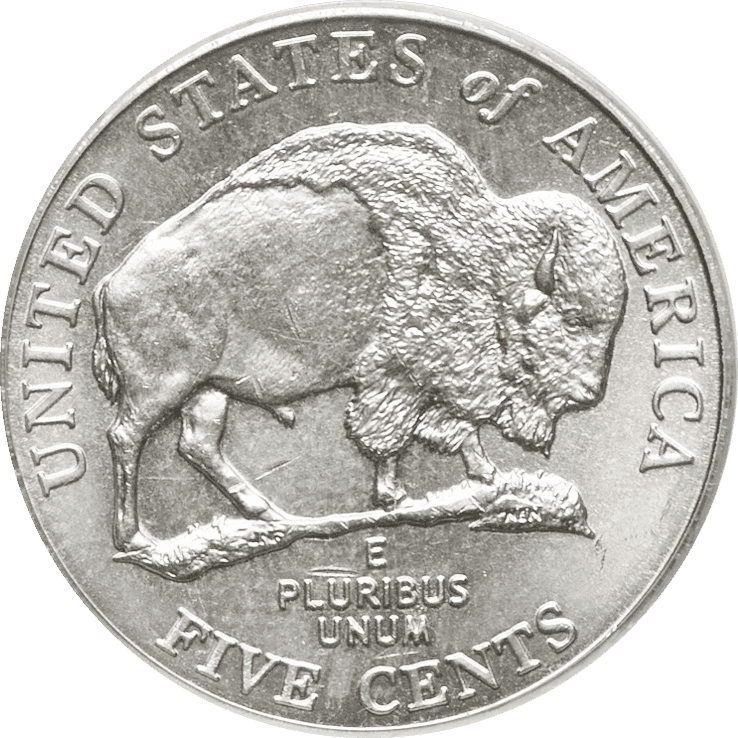 Once Jamie Franki got this demanding job, he created the reverse with an American bison based on an old, highly popular Buffalo nickel struck in the US Mint by 1938. This way, the new design combined the beauty of two of America’s favorite coins.

You can see the buffalo in the coin center with the inscription UNITED STATES OF AMERICA and the denomination FIVE CENTS along the rim. They almost enclose the animal in a circle.

Unlike the old version, this bison faces right, while the indispensable Latin motto E PLURIBUS UNUM is moved from the top and placed under the buffalo feet.

Other features of the 2005 Buffalo nickel

Three mints produced 939,344,679 commemorative Buffalo nickels in 2005. Those in Philadelphia and Denver minted almost the same amount of regular coins, while the San Francisco mint struck only 3,344,679 proof coins.

Thanks to the high mintage, these nickels are abundant on the current coin market, and you should typically pay only their face value. However, some well-preserved and valuable pieces and sought-after errors can reach high prices at auctions. 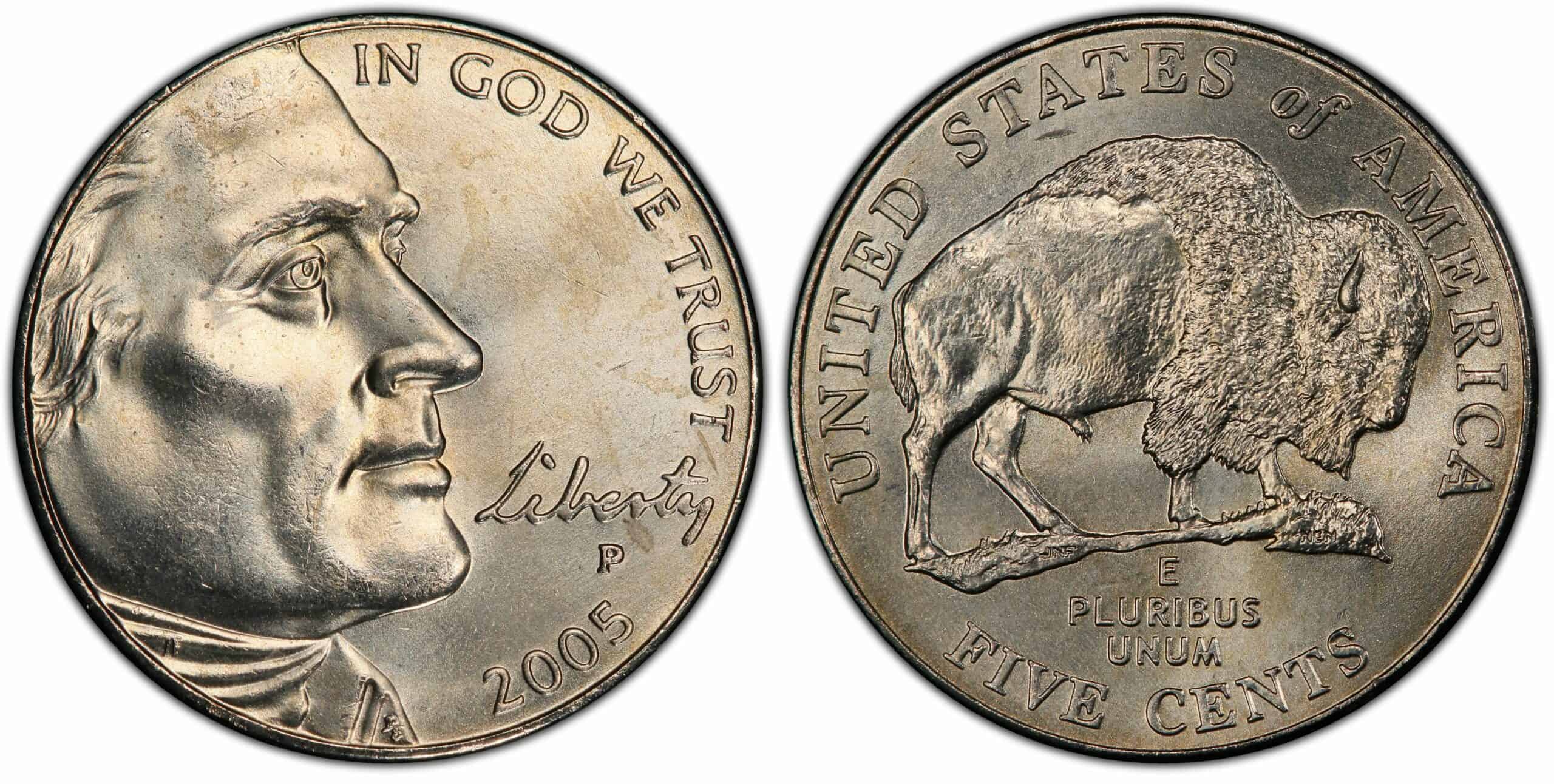 The Philadelphia mint struck both Westward Journey Series’ versions. They produced 448,320,000 Jefferson nickels with the American bison on the reverse. Depending on the grade, these coins with the P mint mark typically cost approximately $0.40 to $1.50.

The Philadelphia mint also produced these coins with the special strike, and most are worth $0.05 to $6. One collector paid $184 for the 2005 P SP 69 Bison with a satin finish at Heritage Auctions in 2008. 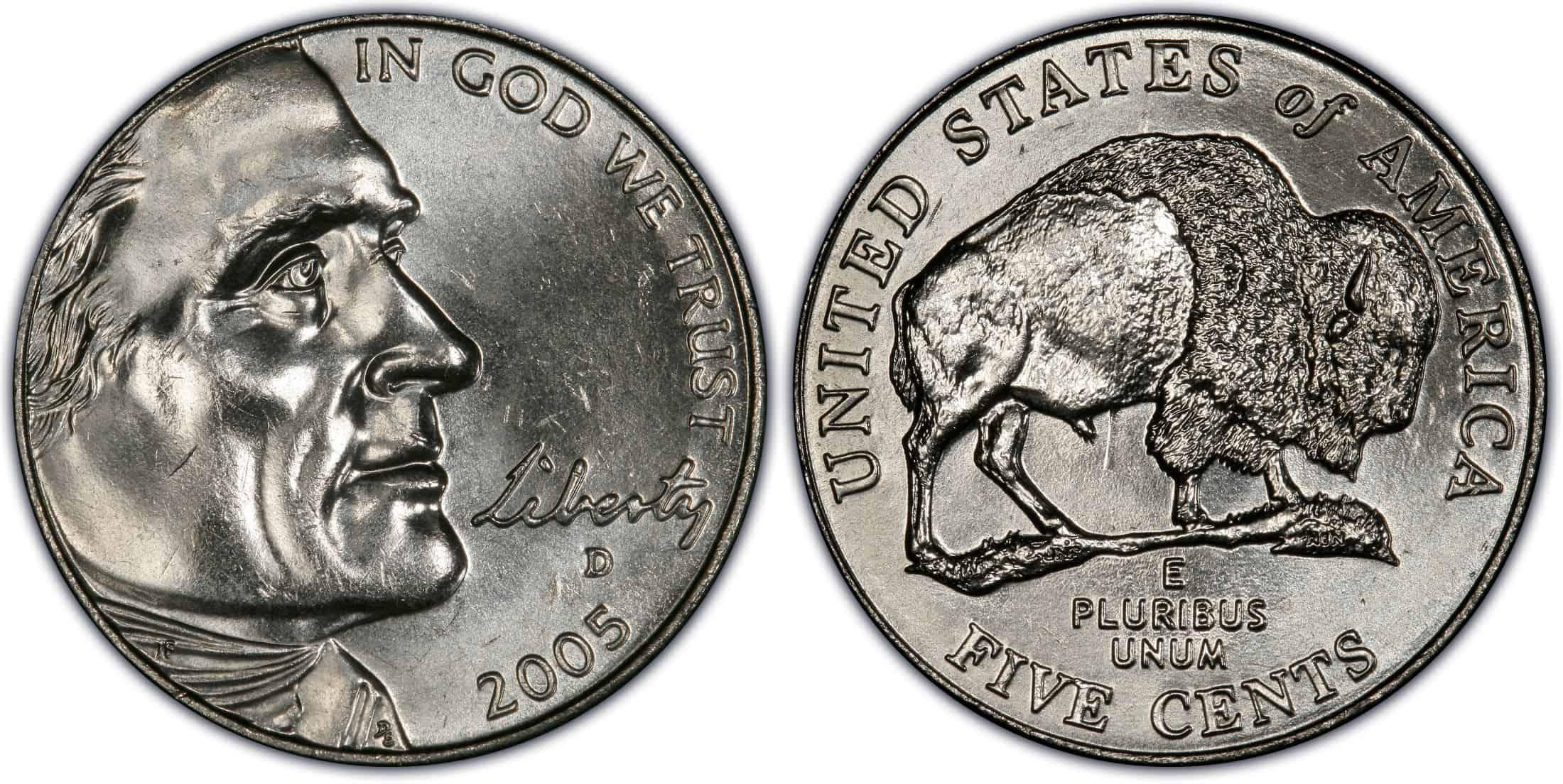 The Denver mint also struck 1,160,000 special strike Bison coins, and you can purchase them for approximately $0.05 to $20, depending on the preservation level. The most expensive 2005 D SP69 Buffalo nickel with satin finish reached $588 at Heritage Auctions in 2016. 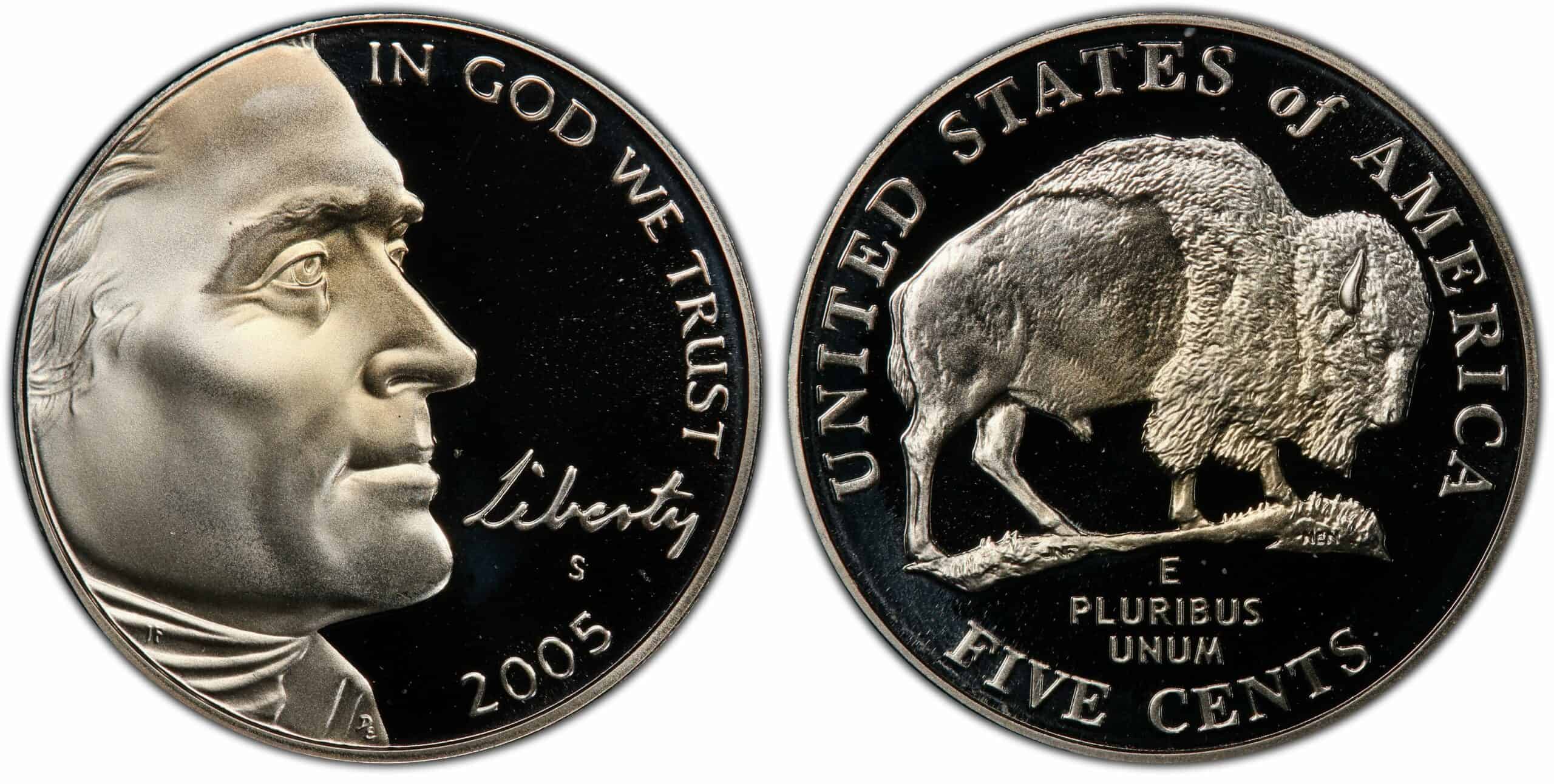 The San Francisco mint only produced Jefferson nickel proofs within the Westward Journey series in 2005. All contained an American bison on the reverse.

Besides some errors that regularly appear during the minting process, 2005 Buffalo nickel has a few specific and certified ones. The list includes the most appreciated, so-called Reverse Die Gouge mint errors typical only for this coin.

Die Gouge errors appear when a foreign item from the dies penetrates through the coin. It gets stuck there and creates weird shapes on the coin surface. In the case of the 2005 Buffalo nickels struck in the Denver mint, this imperfection is known as a Speared buffalo (bison) error.

Be aware that these errors are not visually identical because this object can affect different coin parts, but their characteristics are the same. Such a nickel has a spear (long line) that looks like it enters and exits the bison’s body.

These imperfections are relatively rare, and those coins’ value is in each error’s uniqueness. Depending on the preservation level, they typically cost $30 to $700, but some rarities can be worth thousands of dollars.

The current auction record for one 2005 D MS 66 Buffalo nickel (speared bison error) is $2,650. One collector set aside that money in 2021 when he bought this lovely coin on eBay.

No one precisely knows why this error type occurs, but it is probably a result of the too long struck planchets. The other option is that the planchet was raised under high temperatures.

It forced copper from the core to come up to the coin surface and appear over the nickel coat. Even though this error is pretty standard for 2005 Buffalo nickels, you should pay about $100 for one.

This error occurs when the mechanism that cuts planchets from the copper-nickel sheets restrikes them. In this case, the mechanism doesn’t fully eject the planchet, resulting in a small crescent moon cut from the coin.

This error type is similar to the Improperly Annealed one but more dramatic. In this case, copper comes up to the coin surface, and the entire planchet gets a thin (wash) copper layer.

FAQ about the 2005 Buffalo Nickel

What makes a 2005 Buffalo nickel rare?

This coin type from the Westward Journey series is a commemorative piece with a new obverse design, but its reverse is particularly interesting. It was the first time of seeing the buffalo between the American coinage after 1938 when Buffalo nickels were abolished.

They are collectible pieces, but collectors appreciate Speared Bison error coins the most. These nickels have a small line that goes through the buffalo body midsection, making this error well-known as a speared bison.

Which 2005 Buffalo nickel is worth a lot of money (according to PCGS)?

How much is the 2005 P Buffalo nickel worth?

Most Buffalo nickels produced in the Philadelphia mint are worth about $0.40 to $1.50, depending on the preservation levels. However, some coins in the high grade cost about $1,000.

What is the rarest 2005 Buffalo nickel?