If you were around back in 1999, you might remember how it felt like the end of the world! We were all concerned about Y2K and disappointed that we hadn’t seen any of the advances promised by Beyond 2000. This Australian tech show imagined the fancy toys we might have in the next millennium. Anyway, let’s dig into the 1999 Quarter Value to see what it’s worth.

History of the 1999 Quarter

An American Quarter or Quarter Dollar is a US coin worth 25 cents. It’s one of the two coin denominations listed in dollars. The backs of smaller coins are mostly marked in cents, but the two larger ones are marked in dollars. We have $1 coins, but they rarely circulate so they mostly live in bank vaults or the display cases of collectors. Below are the coin markings:

You’ll note that the 10c coin is marked as One Dime, and it’s the only American coin that officially wears its nickname on its back, but that’s another story. For now, let’s talk quarters. First off, George Washington didn’t believe in putting American leaders on coins. He felt it was too crass, and this was a man who offered his own silver spoons to be turned into coins!

But Washington is the 1st US President, and among the most beloved Founding Fathers, so 200 years after his birth, he was posthumously placed on the 25c coin. He has also appeared on circulating $1 bills since 1869, the Presidential $1 Coin of 1997, and the commemorative $5 gold bullion coin of 1999. The first Washington Quarter portrait was by John Flanagan.

He sculpted it in 1932, and William Cousins made slight modifications in 1999. Coins from 1932 to 1998 have JF at the neckline cut-off while quarters from 1999 to 2021 have both JF and WC for John Flanagan and William Cousins. In 1999, the mint decided to make 50 individual reverses to honor each American state. These were known as 50 States Quarters.

Features of the 1999 Quarter

1999 Quarters are part of the 50 State Quarters Series that ran from 1999 to 2008. They only released five designs a year though, so the quarters made in 1999 represented Delaware, New Jersey, Pennsylvania, Georgia, and Connecticut. Let’s discuss the key features of these coins.

The Obverse of the 1999 Quarter The obverse (heads side) of the 1999 Quarter features a portrait of George Washington facing left. It shows his head, neck, and ponytail, and was originally designed by John Flanagan. It was adapted by William Cousins to make more room for all the additional obverse elements.

The neckline cut-off has JF and WC to credit both designers. Liberty is on the left, under his chin, and In God We Trust is on the right. United States of America was moved to the front and runs along the upper collar of the coin. Quarter Dollar runs along the coin’s lower rim.

The Reverse of the 1999 Quarter 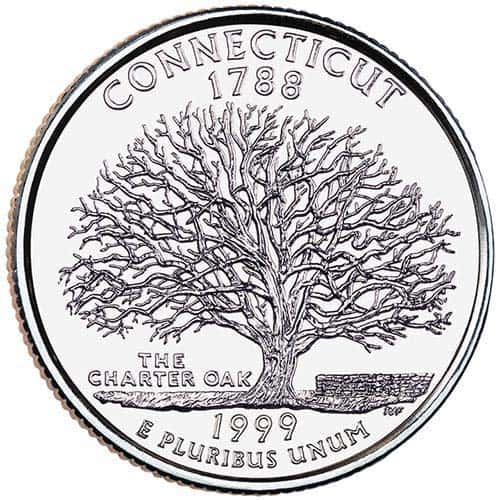 The reverse (tails side) of the 1999 Quarter has a template that gets modified for each state coin. At the top is the name of the state and the year it joined the Union. At the bottom is the mintage date followed by the motto E Pluribus Unum. The device itself will depend on the individual state and may include additional wording. Below are the five reverses from 1999.

Other Features of the 1999 Quarter

In 1999, a total of 4,430,940,000 Quarters were minted in various styles. Technically, they were all Washington Quarters because they all had George Washington on the obverse, but they had 50 different reverse designs, one for each US State. These coins included clad coins for circulation, clad proofs for collectors, and silver proofs offered at a higher premium price.

Aside from condition and errors, the mint mark on the 1999 Quarter can affect its resale value, so let’s look at each coin based on the location where it was minted. For reference, we’ll discuss the mints rather than the individual states, since their values are similar. 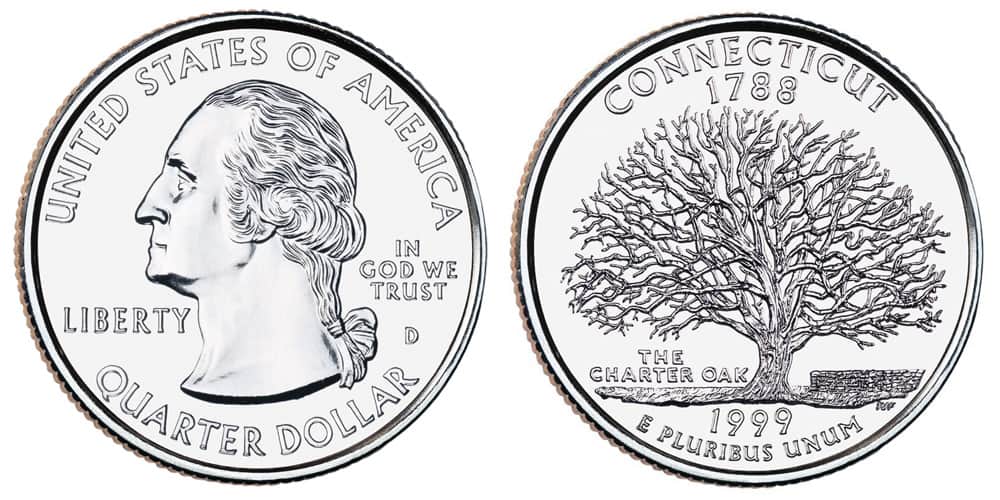 In 1999, the Denver Mint made Clad Quarters for all five states. They carried the D Mint Mark, and their mintage figures are described below. D Mint Marks are often low quality. 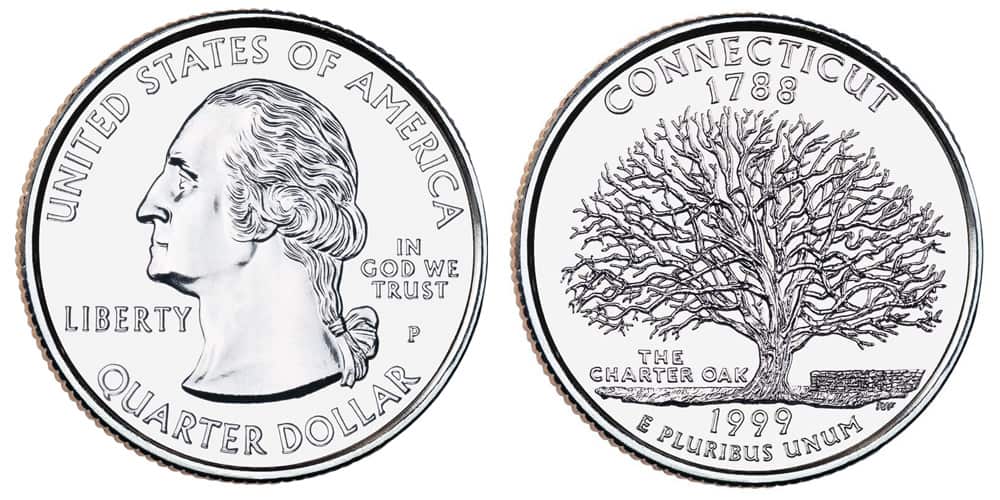 While these coins are evaluated within the same range, let’s start by looking at volumes. In 1999, the Philadelphia Mint produced the following coins with P Mint Marks for each state: 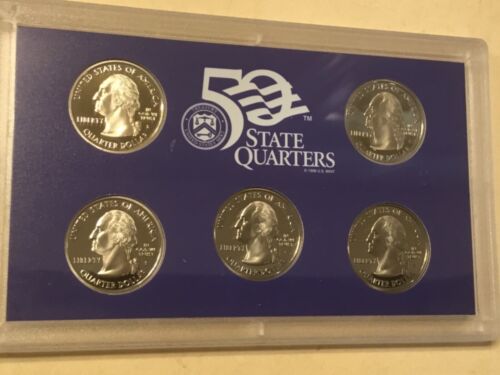 The San Francisco Mint only makes proof coins. They’re minted on pre-burnished planchets and their dies are specially treated. In 1999, Clad S-quarters were minted as shown below:

Coin collectors target coins from particular mints, so to avoid hoarding, San Francisco minted the same volumes for each state. But they’re only worth $40 even in PR 70 DCAM. 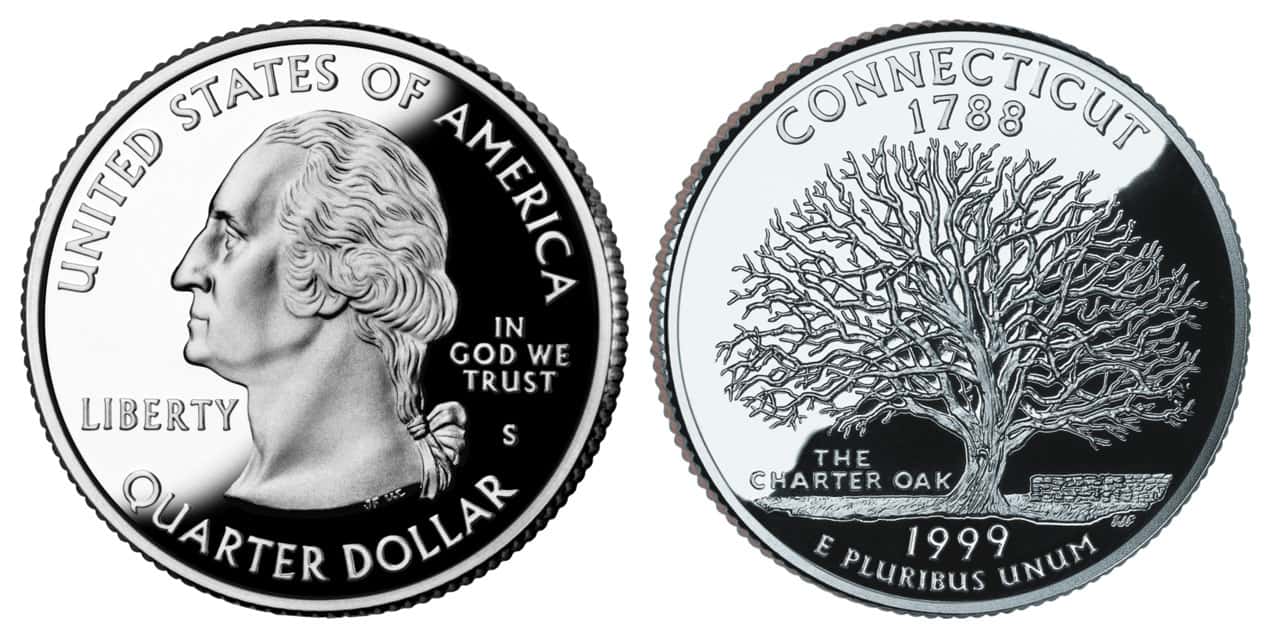 In 1999, San Francisco made both Clad Quarters and Silver Quarters, and both sets were proof quarters. Below are the mintage volumes for the 1999 Silver Quarters for all five states:

As with the clad proof quarters, the same number was made for each state to stop people from hoarding state proofs. But silver proof quarters can only earn $150 in PR 70 DCAM.

1999 doesn’t seem that long ago … until you realize it’s been over 20 years. That’s two whole decades! But in the coin-collecting world, that’s nothing, so these coins haven’t acquired any vintage cred yet. Still, the state coins have historic and sentimental value, so they’re likely to appreciate over time. For now, let’s look at a few important coin errors that raise their value.

Sometimes, a section of the coin gets sliced off at the mint. One clipped planchet error on a Delaware Quarter chopped off part of the boat at the back, and most of the word Liberty plus part of the Q on the front. Ungraded, it sold for $70 on eBay. Another Georgia Quarter with double curved clips plus an off-center error was graded MS 62 and sold for $325 in 2021.

In 1999, most of the 50 State Quarters were cupronickel, though about 4M silver proofs were coined. The clad coins have a pure copper core coated with 75% copper + 25% nickel. So if the clad layer is missing, the coin takes on the coppery color of its core. And this coin has a silvery front with a reddish back. In the high grade of MS 61, the coin sold for $430.

Coins are minted on blank discs called planchets. These are punched off metal sheets then fed into a hopper automatically. Each coin is struck multiple times to ensure clarity and detail. This coin somehow got jammed onto the feeder finger and struck multiple times so it has a weird jagged edge and obscured visuals. In MS 62, the quarter sold for almost $1,000.

Sometimes, after a coin is minted, it doesn’t exit the machine but instead sticks to the die and stamps the next coin. This is called a die cap error or a brockage error, and it can be worth $173 in MS 63. Then, if the planchet below it moves between strikes, you get a double strike error. This MS 65 Quarter has a brock + a distinct double strike, so it’s worth $1,200.

Planchets are punched automatically then robotically fed into the hopper. If they’re well-cut, they get that perfect circular shape. But if anything goes wrong, misshapen fragments or shards of scrap can be loaded into the machine and struck by the die. This seems to be the case here, plus the shard moved mid-strike. In MS 64, this off-center error is worth $400.

If two blanks are fed into the machine at the same time, they squeeze together so one surface gets the front design and the other gets the back design, leaving blanks on the two inner surfaces. Or it could be a double strike on overlapping coins, making a mated pair worth $2,000. It could even be a triple strike that mashes two coins together. That’s worth $3,120.

On occasion, the die itself needs to be shifted or tweaked to ensure accuracy. But if the die isn’t set correctly, bad things happen! In this case, an adjustment error led to a coin with barely any imprint. It could be mistaken for an extremely worn-out coin where all the detail has faded, but it was formally graded as a mint error by ANACS. In MS 60, it sold for $150.

Planchet sheets have predefined metal compositions and disc sizes. So if you strike a coin on the wrong planchet, it will have a different weight and diameter. That’s why the first thing to do when you get a coin is weigh it to confirm if it’s an off-center or a wrong planchet. This 5g quarter was struck on a nickel planchet. It’s worth $1,600 in mint state and $745 in AU 58.

We’ve explained how a die cap happens. And a lot of the time, that stuck disc will eventually slip off and mix with other coins. But before it does, it can obscure the patterns on any coin it strikes, creating blank spot brockages or mangled visuals. This multi-strike die cap blurred the reverse. It’s worth $790 in MS 65; from $900 to $1,400 in MS 66; and $1,600 in MS 67.

A brockage error can be caused by a die cap or by some other interrupting agent. Sometimes, it leaves one side of the coin blank, but other times, the obverse or reverse design bleeds through to the other side due to the pressure of the strike. In this case, the obverse brockage pressed the Charter Oak on both sides of the coin. Ungraded, it sold for over $3,000 on eBay.

American coins are struck in a head-to-tail 180° alignment. That means if you flip the coin vertically, the design stays upright, but if you flip it horizontally, the designs appear upside down. On this Georgia Quarter, the reverse was positioned at 135° instead of 180°. This error is reasonably valuable, so even in the mid-range grade of AU 58, it’s worth more than $200.

On occasion, a die moves while it’s being struck by the hub, causing doubled die errors on the obverse or reverse. These errors are then transferred to every coin made with that die, and since they’re so common, DDRs and DDOs on State Quarters are only worth $10 in mint state. But on clad proof coins, only one DDO has been graded so far. It’s worth over $2,500.

FAQs About the 1999 Quarter

The 1999 Quarter had five different designs so there’s plenty of scope for errors. But the most famous one is the Spitting Horse on the Delaware coin. It’s a mint error that makes it appear like the horse is spitting since a crack in the die transferred a slash below the horse’s mouth. It’s not an especially valuable error – it might net $40 or so in higher mint states like MS 65.