It’s important to study a coin’s backstory. Not just for your general knowledge, but also for profit-making purposes. For example, when a coin is first discovered – particularly an error coin – it can be quite pricy because it’s seen as one of a kind. But as collectors and resellers start to seek it out, it may end up being part of a variety, and that can shoot down its value.

That’s what happened with the 1995 Penny, particularly the DDO in Philadelphia and Denver Pennies. When this Lincoln Cent was first spotted, it fetched prices as high as $19,200. But today, so many exist in high grades that you’d be lucky to get $500 for one. Turns out they were so common that you can easily find them in coin rolls and pocket change as we speak!

Let’s take a few steps back and look at Lincoln Pennies in general. They were introduced in 1909 as the first coin to feature a US President. And they were only the second denomination (and the first circulating one) to feature the motto In God We Trust. This legend was almost an afterthought because when the mint redesigned the coin, it had too much negative space.

The initial design was by an external sculptor called Victor David Brenner, brought in by President Theodore Roosevelt to beautify the penny. It was part of a project that started in 1904, and it deeply miffed the in-house mint engravers because these new coins were nicer to look at … but tougher to mint. So Charles Barber made changes to ease the coining process.

These included pushing Lincoln lower on the coin, but that left excess space above his head, which Barber filled by adding In God We Trust. There was also some controversy around VDB, the designer’s initials, but this was later resolved in 1918. Then in 1959, the reverse design was changed by Frank Gasparro to celebrate Abraham Lincoln’s Sesquicentennial.

Victor Brenner’s initial reverse had two stalks of durum wheat on the back. But this new design had the Lincoln Memorial Building at the back, and he added his initials, FG, to mark the alteration. Let’s talk a little about this iconic building. It’s designed in the form of a temple in the Greek Doric style, and a 19-foot statue of the man sits on a chair inside it.

Some people feel this would have offended Lincoln’s humble sensibilities, but it was just one of many ironies surrounding the building. Another example? Lincoln is colloquially known for ending slavery. But while key African Americans were invited to the building’s launch in 1922, they had to sit in a segregated section away from their Caucasian counterparts. Ouch!

The building itself has been the site of many activist events, including the famous I Have a Dream speech by Martin Luther King Junior. The memorial is open to the public 24/7 and is part of a site that hosts multiple monuments to veterans of the Korean War, the Vietnam War, and even George Washington, so it’s quite a historic site. It was a good choice for the penny.

Speaking of this 1-Cent coin, it was initially 95% copper with the remainder in either copper or zinc, sometimes both. During the Second World War, that changed to 99% low-grade carbon steel coated in 1% zinc. Then from 1982 until today, the metal composition became 97.5% zinc plated with 2.5% copper for color. And this tiny coin has no reeds on its edges.

A lot of the choices concerning the penny have been influenced by the price and availability of copper. Before 1856, for instance, 1-cent coins were larger – almost 3cm in diameter. But when copper prices rose, the coin’s size was reduced to just under 2cm to ensure its melt value and production costs stayed below its face value. The same reason led to 1982’s zinc.

As we’ve just noted, the 1995 Penny is a Lincoln Memorial Penny designed by Frank Gasparro while he was still an assistant engraver at the US Mint. The memorial design was used from 1959 to 2008 when the Bicentennial Penny took over. And while contemporary coins aren’t usually that profitable, this 1-cent coin routinely sells for thousands of dollars. 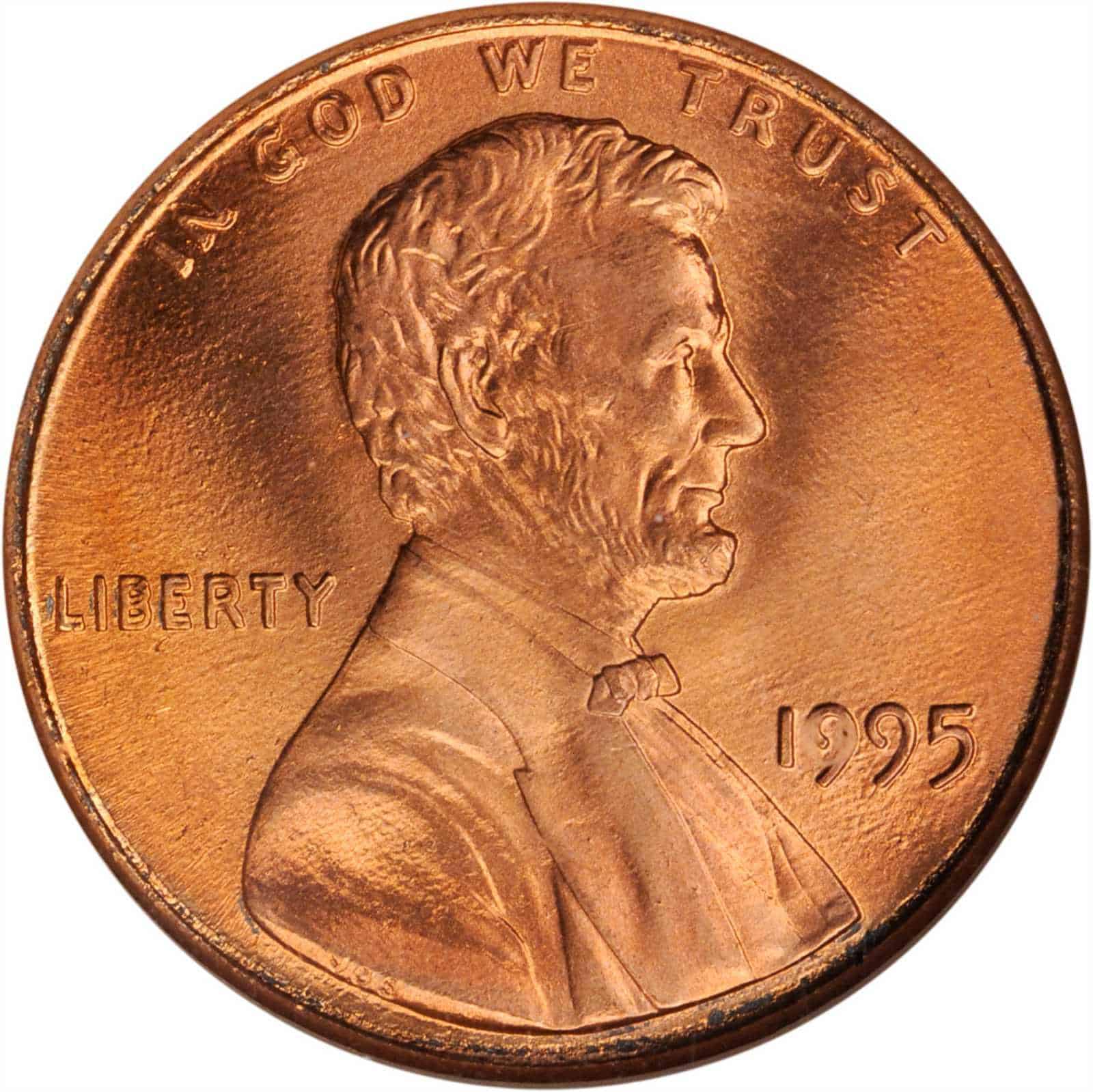 The obverse (heads side) of the 1995 Penny shows Abraham Lincoln, the 16th US President. He’s facing right in this device, with Liberty behind him and the mint date in front of him. On San Francisco and Denver Cents, the mint mark is right beneath the date. Above his head, it reads In God We Trust, and on his shoulder cut-off, a VDB is carefully scratched. 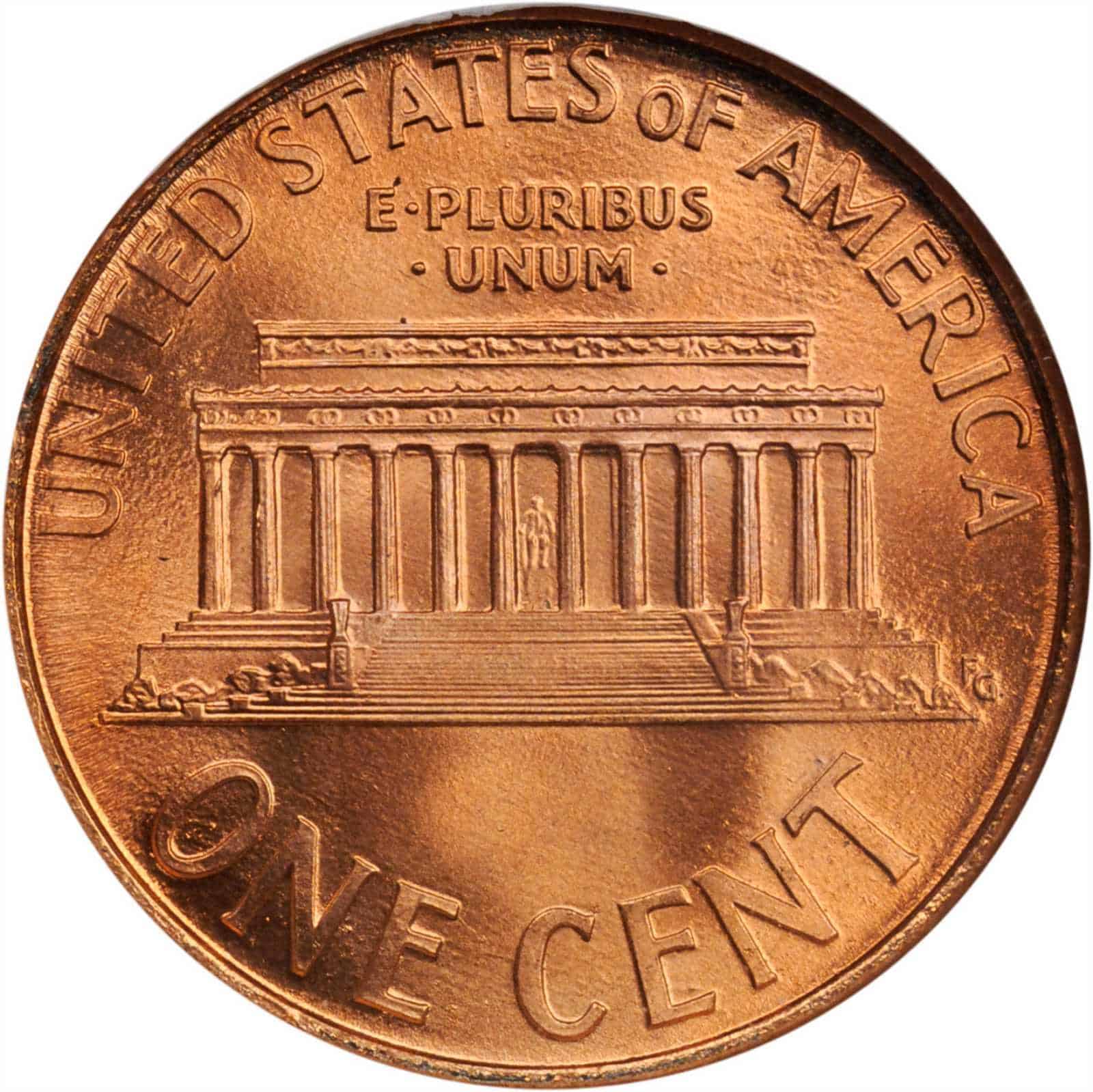 The reverse (tails side) of the 1995 Penny features the Lincoln Memorial Building, with the statue of Lincoln peeping through the central pillars. You can only see him on high-grade coins though. The top of the coin reads United States of America with E Pluribus Unum underneath. One Cent runs along the bottom of the coin, with FG next to the right rim.

Other Features of the 1995 Penny

The 1995 Lincoln Penny is made of 97.5% zinc with a top coat of 2.5% copper. It weighs 2.5g and is 19.05mm in diameter. In pop culture, this coin attracted a lot of attention when USA Today ran a story about it on March 6th, 1995. That famous front-page headline inspired a legion of new fans to start collecting coins as they sifted coin rolls for this priceless penny.

Coins are a curious pursuit because so many factors affect their value. For the 1995 Penny, lots of circulating samples are in mint state, so even at MS 65, all mint marks hover at $10. But once you get to MS 69, only one or two have been graded, so you start to see prices hit the $3,000 and $4,000 mark. Let’s review these coins by minting location to confirm rates. 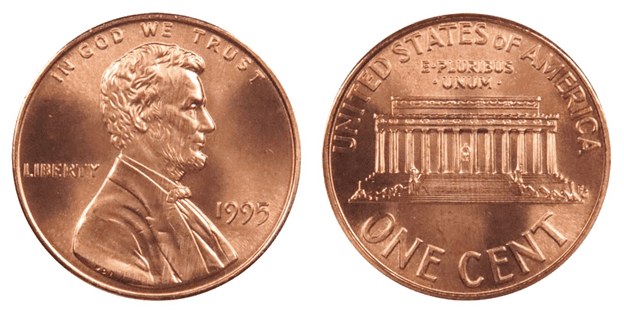 At the time of writing, fifteen graded 1995 (P) DDO Pennies were available for sale online, but there’s no record of how many of these coins were minted. The prices vary based on the condition of the coin and the clarity of the doubling. MS 68 RDs can sell from $315 to $490.

Both 1995 (P)s and 1995-Ds have graded DDO examples. But this error seems easier to spot on Philadelphia Pennies. Or maybe it just occurs less frequently in Denver Pennies. It has 3 variants that show doubling in We, Trust, and Liberty, as well as the date and mint mark. A few years back, you could sell an MS 66 RD for $600 and an MS 66+ RD for $950 on eBay. 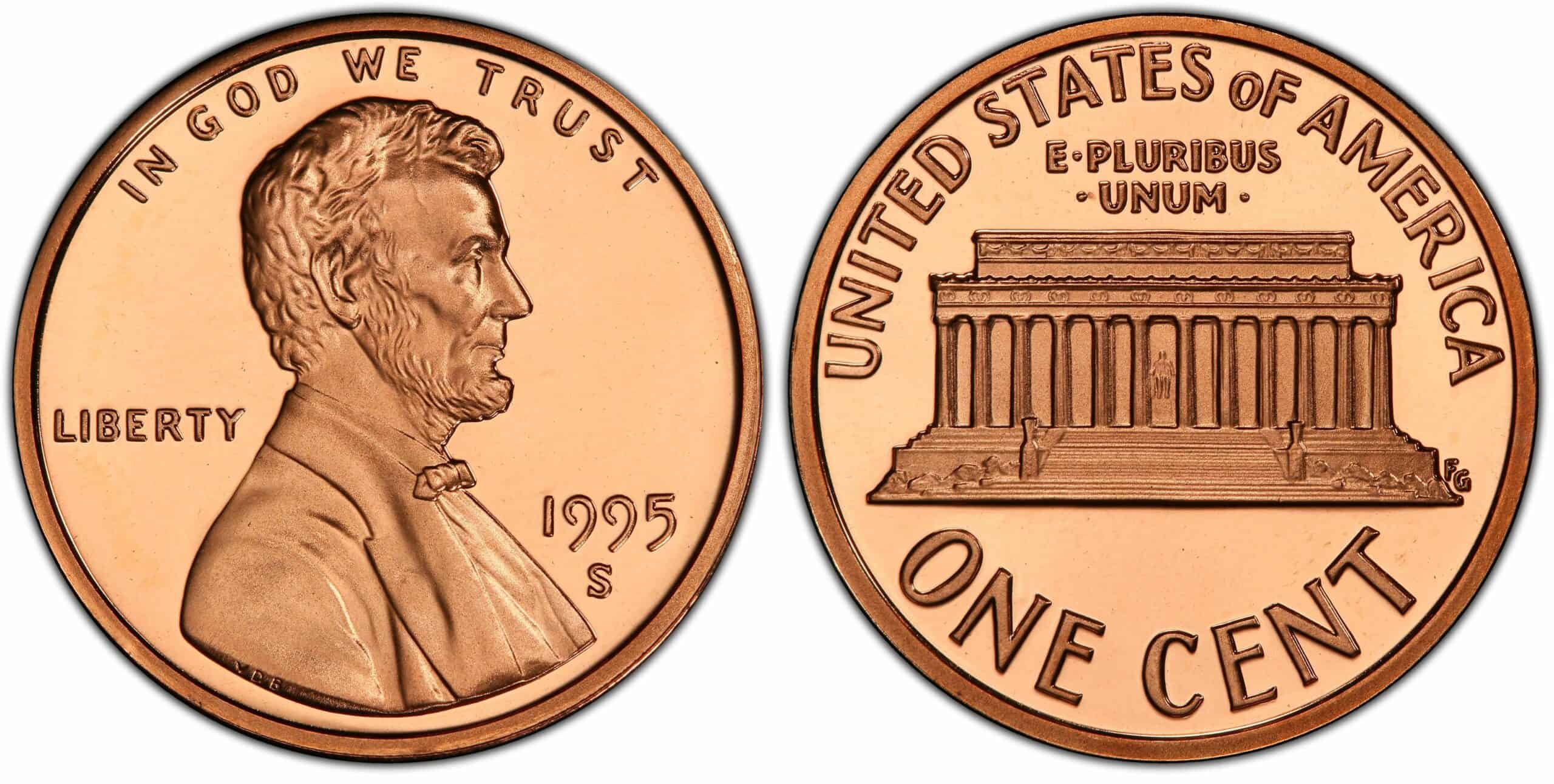 After 1965, the San Francisco Mint exclusively made proof coins and in 1995, it produced 2,797,481 Proof Pennies with the S Mint Mark. This coin is the red-headed step-child of the 1995 Penny family, pun intended. With those DDOs from Philadelphia and Denver getting so much attention, the S-Penny gets neglected. Even in the perfect PR 70 RD DCAM, it’s only $23.

As we’ve seen so far, 1995 was a pretty valuable year for pennies. But as with all coins, some errors can launch the price of this penny into the stratosphere. Let’s study a few top samples.

Stepping away from doubled dies, let’s look at a double denomination error. This is a coin struck on top of another coin that already has a device and a field. In this case, it’s a 1995 Penny struck on a flipped 1991 dime. On the back, you can see Roosevelt and the date behind the Memorial, and you can see One Dime on the front. In MS 66, it sold for $3,290 in 2017.

The outer frame of a coin is sometimes called the rim or the collar, and it’s typically made using a three-piece detachable mold. But if part or all of the mold breaks off, the metal in the coin spills out, creating a thinner, flatter coin. This is called a broad-struck error and while it’s not especially expensive, it’s a pretty coin to have. In MS 62, it’s worth about $20.

All coins are made on blank discs called planchets, which are struck from the top and bottom to imprint the design. They have to be struck multiple times to make sure all the words and images are clear, and if the disc wobbles between strikes, you get a double strike and/or an off-center error. A 75% off-center coin is between $80 to $120 while a 40% off-center is $90.

A mule error occurs when the reverse of one coin is struck onto the obverse of another coin. It could also be two obverses or two reverses from different denominations. On this coin, the obverse is a 1995 Lincoln Memorial Penny while the reverse is a Roosevelt Dime. The blank was probably a dime planchet due to the silver color. In MS 64, this coin sold for $57,000!

We saw a double denomination error earlier, but sometimes, a coin is struck on a blank from the wrong denomination. You can sometimes spot this by checking the color of the coin, but a smarter tactic is to weigh the coin. 1995 Pennies should be 2.5g but this one seems to be the right size and color, but it only weighs 1.66g. In MS 62 RB, the error coin is worth $100.

Remember how we said the 1995 Penny was copper on the outside and zinc on the inside? That copper layer is quite thin, which is why you can see the grey peeking through the red on some of the double-struck and off-center coins we’ve looked at. But on this particular penny, half the copper top coat seems washed off! In MS 64, an error like this is worth about $150.

What is the Error in the 1995 Lincoln Penny?

The main error in the 1995 Lincoln Penny is a DDO, which stands for Doubled Die Obverse. You can find it in both Philadelphia and Denver coins. To identify the error, grab a jeweler’s loupe or coin microscope and check the date, the word Liberty, the mint mark, and the motto In God We Trust. The doubling is often visible to the naked eye and can be worth thousands.