The 1994 one cent coin is known as a modern Lincoln penny. And it has lots in common with older pennies bearing the image of the same president.

But if you’ve found one of these coins in your pocket change, could it be worth holding on to? We’re going to investigate the 1994 penny value. We’ll find out what separates run-of-the-mill coins from something rare and special. And we’ll look into the history and design of the modern Lincoln penny.

The first pennies to carry the image of Abraham Lincoln were struck in 1909. They had a simple image of two ears of wheat on the reverse. But 50 years on, the 150th anniversary of Lincoln’s birth demanded a new design.

The new Lincoln pennies had the Lincoln Memorial in Washington DC on the reverse. And these were the first coins in the series that’s known as the modern Lincoln cent.

They were also notable for another reason. Look closely at the reverse, and you can see the statue of Lincoln in the center of the portico. That makes this one of only a few US coins to have an image of the same person on the obverse and reverse.

This image would remain in place until 2008, so all 1994 pennies have the Lincoln Memorial reverse. But 2009 was the bicentenary of Lincoln’s birth, so it was once again time for a new design. That year saw four new reverses commemorating different stages of Lincoln’s life.

Those coins were produced for just a single year. In 2010, a new reverse showing the “Union shield” was introduced. It’s the same design that’s used for the cent today.

The earliest Lincoln pennies were made of bronze, but rising copper prices meant that the metal was becoming almost as valuable as the coin. As a result, people began to hoard the coins, hoping to realise a profit when copper prices rose again.

So in 1973, over 1.5 million cents were struck in aluminum instead. But the vending machine industry said that the coins would block their machines, and they were withdrawn. Bronze-clad aluminum cents were also produced but never used.

Nevertheless, the writing was on the wall for the copper cent. In 1982, the composition was changed to copper plated zinc. All 1994 pennies – and all present day cents – are made from this recipe. 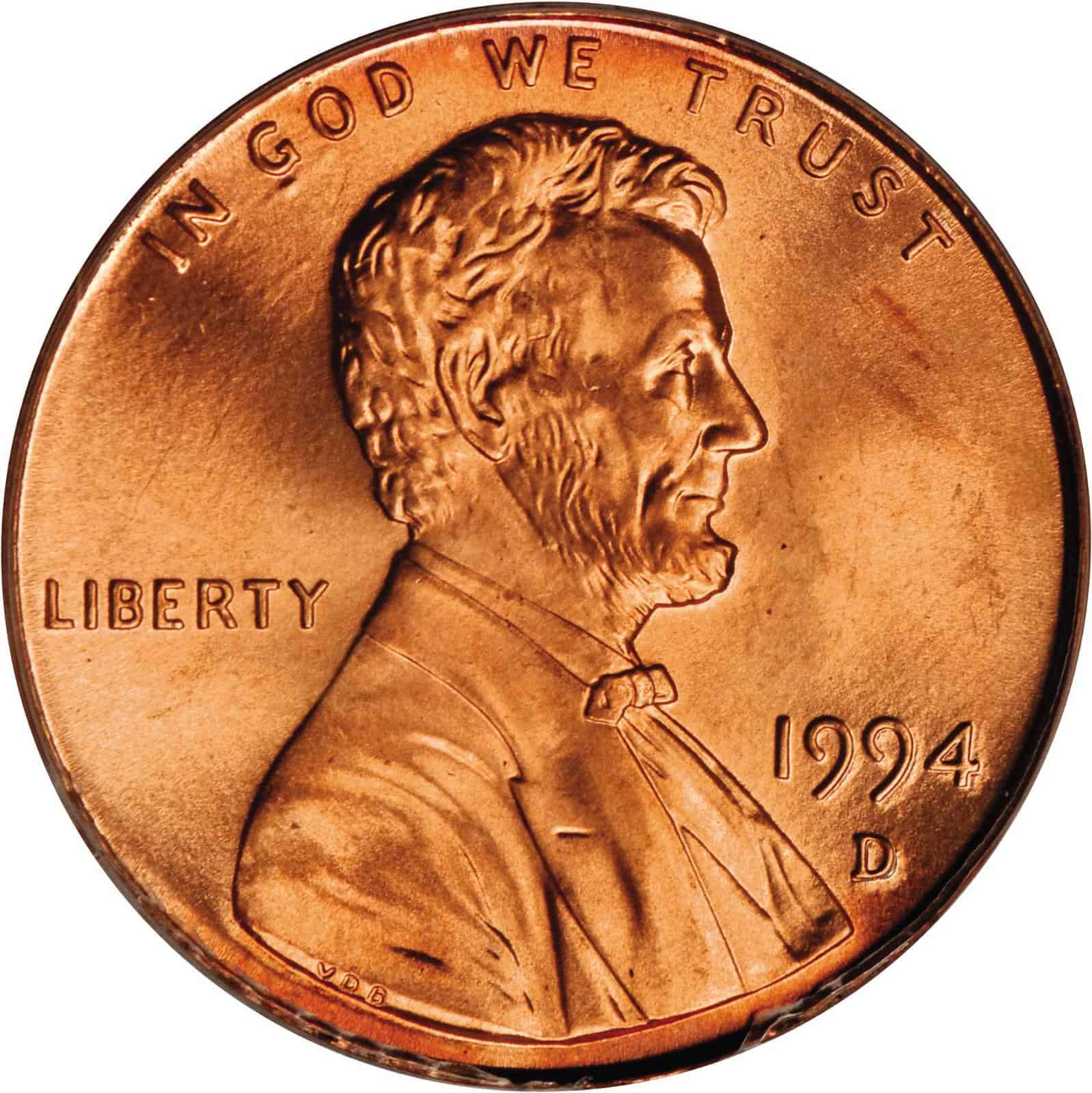 The obverse of a 1994 penny has the same portrait of Abraham Lincoln that has been on the “heads” sides of pennies since 1909.

The portrait was the work of Victor David Brenner. Brenner was a sculptor, and he is believed to have worked from a photograph of Lincoln taken at the studio of Matthew Brady.

Lincoln is shown dressed in a smart jacket and cravat, facing right. Brenner said that he had imagined the president as he would have looked if reading to a child. This, he felt, would show him at his brightest and most engaging.

Brenner’s initials, VDB, can be seen discreetly tucked below the edge of Lincoln’s shoulder. They had originally been placed on the reverse of the coin but had attracted criticism for being too large.

Despite Brenner’s protests they were removed and were only reinstated in 1918. This time, though, they were placed on the obverse, in the position they still enjoy today.

Above the bust of Lincoln is the motto “In God We Trust”. To the left is the word “Liberty”, while the date is to the right. 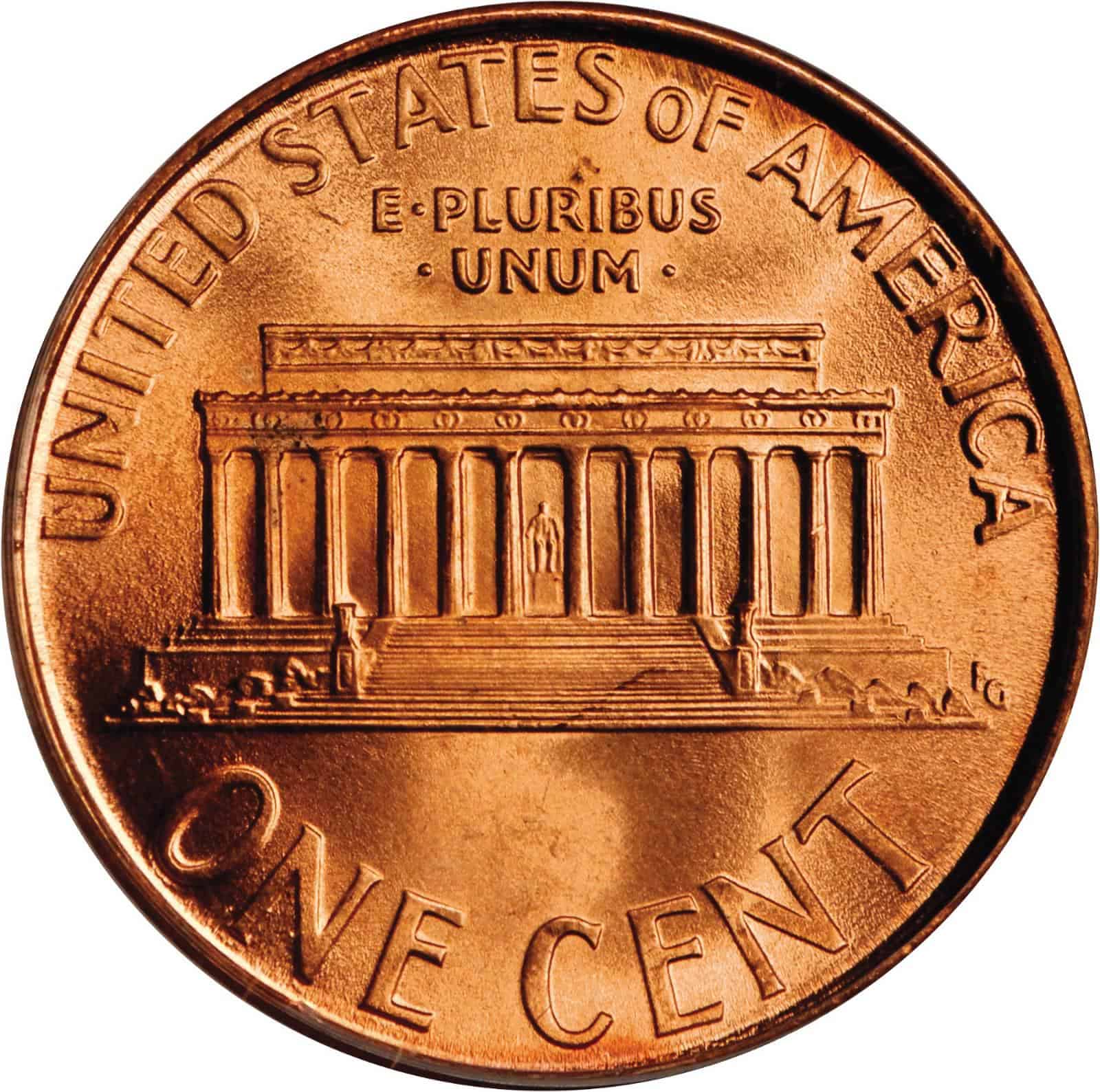 The 1994 penny has an image of the Lincoln Memorial in Washington DC on the reverse.

It’s the same image that had been used since 1959, and it was the work of Frank Gasparro. At the time he designed it, he was Assistant Engraver at the Mint. He was promoted to Chief Engraver in 1965, a position he held until 1981.

There are different views on the artistic merit of the design. The Treasury Secretary, Robert B. Anderson, called it “impressive”. But historian and numismatist Don Taxay described it as looking “like a trolley car”. (Once you’ve seen the similarity, it’s hard to unsee it!)

The motto “E pluribus unum” appears above the Memorial. It’s Latin for “From the many, one”, and refers to the creation of the USA from the many states.

The name of the country is above the Memorial, curving along the top edge of the coin. The denomination is at the bottom.

Other Features of the 1994 Penny

The 1994 penny was struck in Philadelphia and Denver, with proofs struck in San Francisco. While earlier coins from Philadelphia don’t have a mint mark, from 1980 almost all denominations have a “P” to signify their origin. We say “almost all”, because there is one exception – the cent.

Philadelphia did briefly add a mint mark to its pennies, but that happened only in 2017. So if your 1994 penny doesn’t have a mint mark, it’s because it comes from Philadelphia.

As a copper clad coin, the 1994 penny also varies significantly in color. Copper starts life red, but it turns brown as it’s exposed to the air. The independent coin grading agencies will designate a color for each penny they assess:

This YouTube video from CoinOpp shows you how to color grade Lincoln pennies. 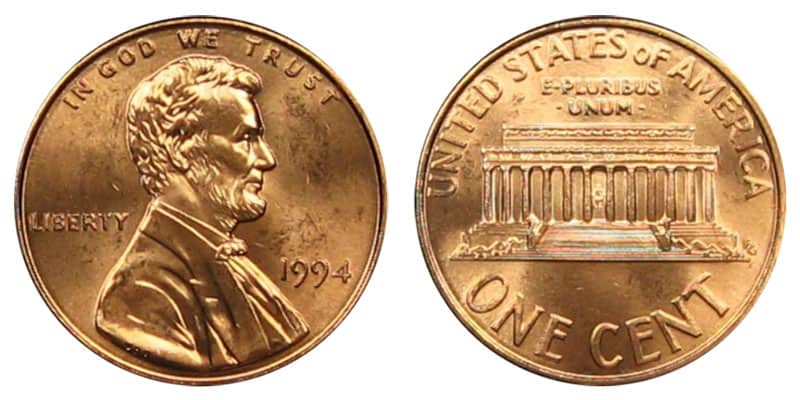 Over 6.5 billion pennies were struck at the Philadelphia mint facility in 1994. So these are far from rare! In circulated condition, they will generally be worth only their face value unless they have an interesting error.

Red coins in mint state, though, can be worth much more. Indeed, values are surprisingly punchy for 1-cent coins minted only around 30 years ago.

But the finest example known to exist is a single penny graded an almost perfect MS69. And that one is valued at an astonishing $13,000.

Even more 1994 pennies were struck in Denver than in Philadelphia. Over seven billion of them came out of that facility. So if one of them is going to be worth more than its face value, it has to be something special.

That usually means a red coin in mint condition. A 1994 Denver penny graded MS63 is valued at the same $6 as its Philadelphia counterpart.

And if you want a gem quality example graded MS65, you can expect to pay around $10. That might not be a huge sum of money – but it’s still 1,000 times the coin’s face value.

It’s not until MS68+ that one of these coins will break the three-figure threshold. The PCGS values a 1994 D penny at that grade at $400.

At MS69, the value leaps again. That’s the highest grade given to any coin by the PCGS so far. Four coins have been identified to date, and they’re each valued at $3,750. 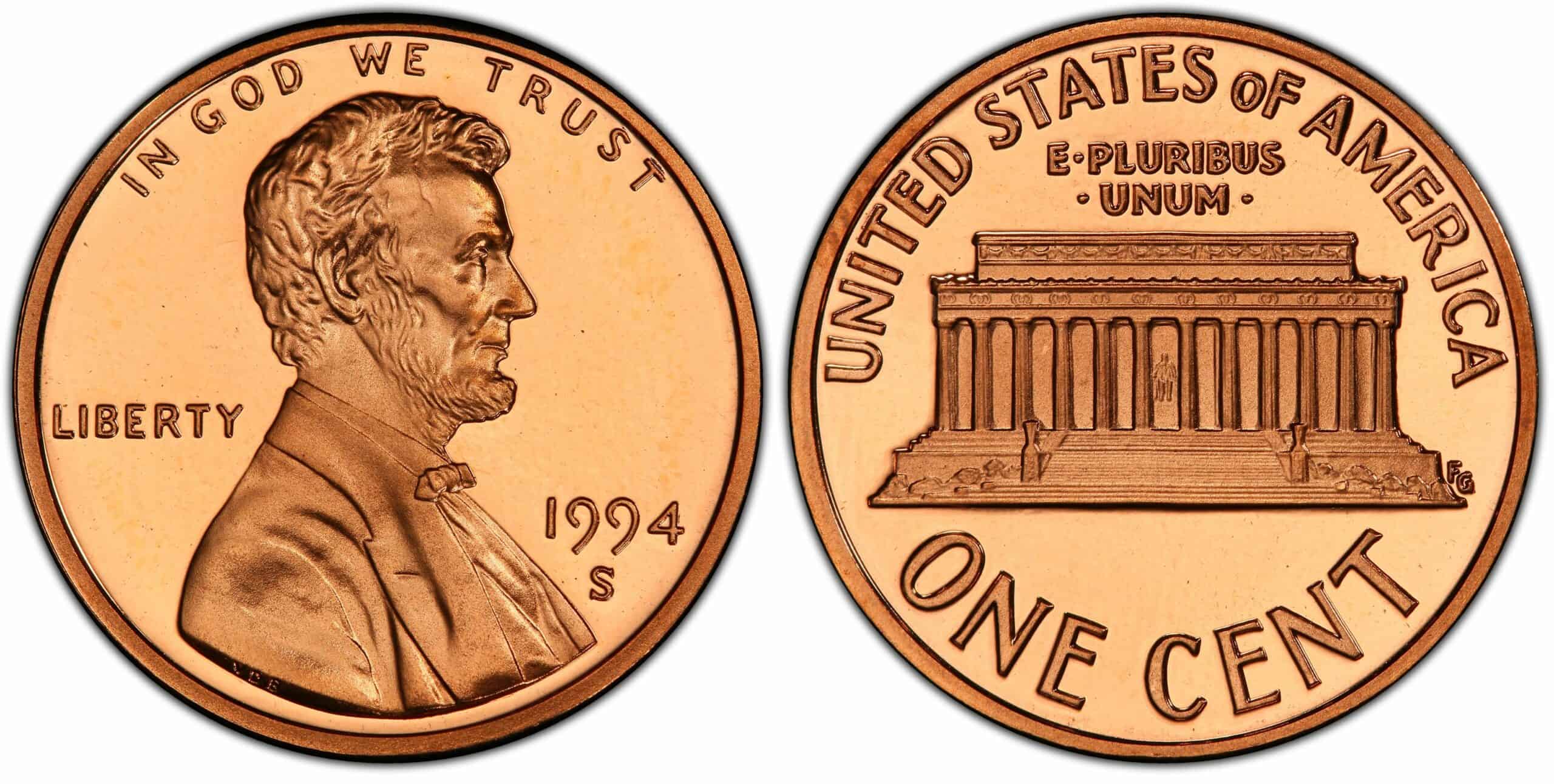 Over 3.25 million proofs were struck, and they’re all graded as deep cameos, often abbreviated to DCAM. These are proof coins that have a particularly attractive contrast between glossy fields and frosted devices.

The highest price ever fetched for one of these coins was for a perfect PR70 deep cameo penny. It sold at auction in 2002 for almost $2,000.

But spending that much money on a relatively recent coin can be a gamble. At the time of that auction, only 23 1994 S proofs had been given the perfect PR70 DCAM designation. Today, that figure has increased more than tenfold, and the PCGS places their value at just $42.

One 1994 penny from Philadelphia combined two different kinds of errors.

Broadstruck coins are those that weren’t held firmly by the collar as they were struck. As a result, the metal is able to press out beyond what should have been the coin edge.

A multistruck coin results from a coin not being ejected from the coin press after it’s been struck. It’s then struck repeatedly, leaving multiple images.

The penny in question had been graded MS64 red by the PCGS. And when it was sold at auction it fetched just under $70. 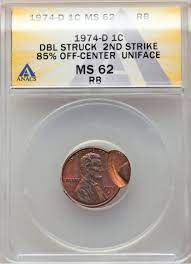 Here’s another penny that combines two different kinds of striking errors. A 1994 Philadelphia penny wasn’t ejected from the coin press and was struck a second time. And in this case, the second strike was 85 per cent off-center.

The coin was graded MS62 red by the PCGS and sold at auction for $180.

Double die errors stem from an error during production of the die used to strike the planchets. That itself has to be struck several times to capture every part of the design. And if it moves between strikes, a double image will be created which is then transferred to the coins.

Double die errors can be either double die obverse (DDO) or double die reverse (DDR), depending which side of the coin the doubled die was used for.

With the 1994 Philadelphia penny, the doubling is on the reverse. You can see it on the pillars towards the center of the Lincoln Memorial.

A coin with this error graded AU58 brown (almost uncirculated) sold at auction for $50. But as ever, the value climbs with coin condition. A coin with the same error but graded MS67 red sold for over $1,500.

This YouTube video from Couch Collectibles looks at all these errors and more.

Most 1994 pennies aren’t rare. Several billion of them were struck, so you won’t have to look too hard to find them! But amongst them are some much rarer examples.

Coins in the highest mint state grades are more difficult to find. (These are coins that have never been circulated, so are in pristine condition.)

Coins with evidence of errors made by the mint during production are also much rarer. A good one to look out for amongst 1994 pennies is the double die reverse. Look closely at the pillars of the Lincoln Memorial. If you can see shadowy pillars alongside the real ones, this is a double die reverse.

Unless they have an interesting error, circulated 1994 pennies won’t be worth more than their face value. But red coins with a high mint state grade can be considerably more valuable.