Have you come across a 1989 quarter and wondered whether it is worth any money?

The 1989 quarter value depends largely on the coin’s condition. If you are lucky enough to come across a new, undamaged 1989 Washington quarter, the coin might be worth a lot of money.

The 1989 quarter error coins can also be worth thousands of dollars depending on the nature of the error—so it helps to learn the type of errors to look for when grading your coins.

In this article, I will explain everything you need to know about the value of Washington quarters from 1989. You will learn about the coin’s history, its interesting features, errors that might be worth a lot of money, and the value of the different 1989 quarter varieties.

History of the 1989 Quarter

The 1989 quarter belongs to the Washington quarter series, first struck in 1932. The quarter is the present-day 25-cent or quarter of a dollar and espouses a long, interesting history.

In 1924, Congress set up the United States Bicentennial Commission, responsible for organizing the celebrations for the 200th anniversary of the birth of the country’s first president, George Washington. These celebrations would occur in 1932.

As part of the celebrations, the Bicentennial Commission proposed that the U.S. Mint produce a Washington dollar with the President’s portrait to replace the Walking Liberty design on the half dollar.

The committee launched a competition to find an artist for designing the coin. The coin’s obverse design was to be based on the Washington statute sculpted by Jean-Antoine Houdon. The artist was free to create a reverse design of their liking.

After artists submitted their entries, the Commission of Fine Arts (CFA) and the Bicentennial Committee chose Laura Gardin Fraser’s designs for the medal and the half dollar. However, some legislators proposed a law to create a commemorative Washington quarter instead of the half dollar. Congress approved the proposal for the new quarter to replace the Standing Liberty quarter.

The Treasury held another competition overriding the previous one. The Fine Arts Commission still selected Fraser’s design, but the Secretary of the Treasury, Andrew Mellon, opted for the design of a different artist, John Flanagan. Despite opposition from the Committee and Commission, Mellon’s decision to go with Flanagan’s design stood.

Minting of the new Washington quarter began in July 1932, and the coins were released into circulation by August 1932.

More than 1 billion quarters were minted in Philadelphia, Denver, and San Francisco in 1989. Therefore, the 1989 Washington quarter is not rare but in some cases, it can be worth more than face value.

Features Of The 1989 Quarter

In this section, we look at the unique physical attributes so you’ll know what to look for in a 1989 quarter that might be worth some good money.

The Obverse of The 1989 Quarter 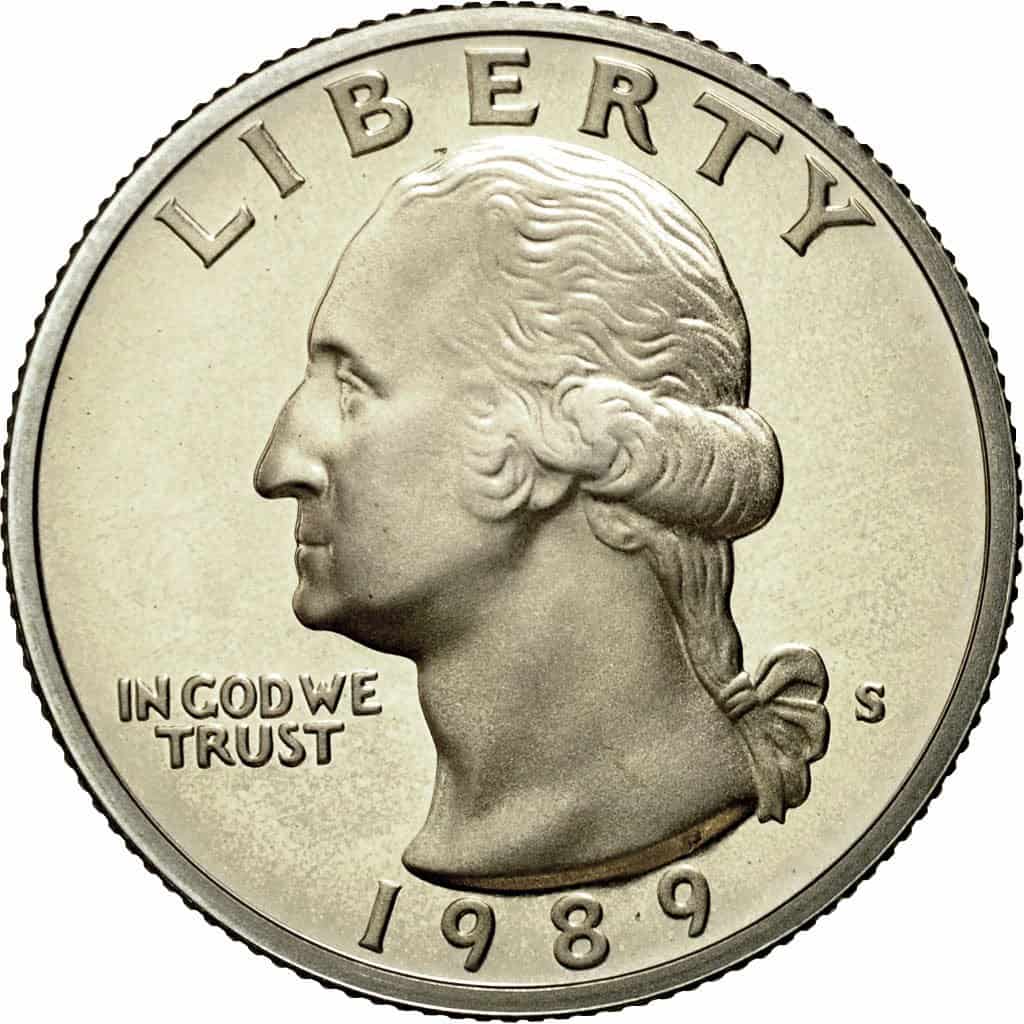 The obverse is also known as the heads. On the obverse side of the 1989 quarter is a left-facing portrait of George Washington based on Jean-Antoine Houdon’s 1785 sculpture of the first president of the United States of America.

The motto IN GOD WE TRUST is imposed on the left of the coin adjacent to the President’s throat.

The mint mark appears on the right behind the President’s low-hanging ponytail.

The Reverse of the 1989 Quarter 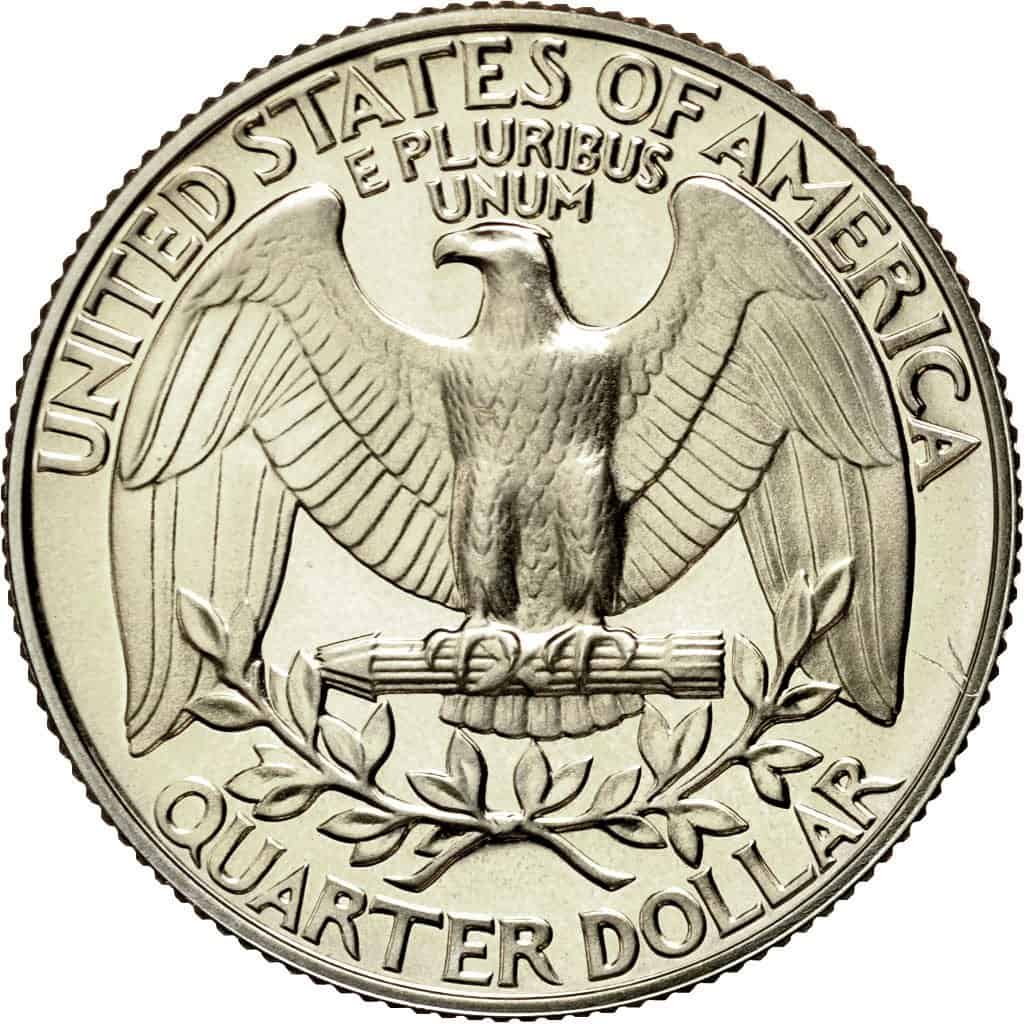 The reverse is also known as the tails. On the 1989 quarter, the reverse features a left-facing bald eagle with its wings spread out wide. The eagle is perched on a bundle of arrows, and two olive branches frame the eagle from underneath.

The words UNITED STATES OF AMERICA appear around the top of the coin, followed by the motto E PLURIBUS UNUM right below it.

The words QUARTER DOLLAR appear around the bottom of the coin’s reverse.

Other Features of the 1989 Quarter

The 1989 Washington quarters were minted at the Denver, Philadelphia, and San Francisco mints.

The Denver and San Francisco coins have a mintmark D and S, respectively, which appear on the quarter’s obverse on the right side and behind President’s ponytail. The 1989 quarters from the Philadelphia mint do not have a mintmark.

If you are curious about the value of your 1989 quarter, this section is for you. There are three varieties of Washington quarters from 1989 and each is valued differently.

The three 1989 quarter varieties are:

Let’s look at each coin variety and find out whether your 1989 quarter is worth more than face value.

Most of these coins were released into circulation, so the 1989 quarters you will likely come across would be worn and even damaged. Worn or slightly damaged Washington quarters from 1989 are worth face value or 25 cents.

Because most of these coins were released into circulation, it isn’t easy to find 1989 quarters in mint uncirculated conditions or grades higher than mint state (MS) 65.

The most valuable 1989-P quarter was auctioned in 2007 in mint state M67 for $1955, according to the Professional Coin Grading Service (PCGS). 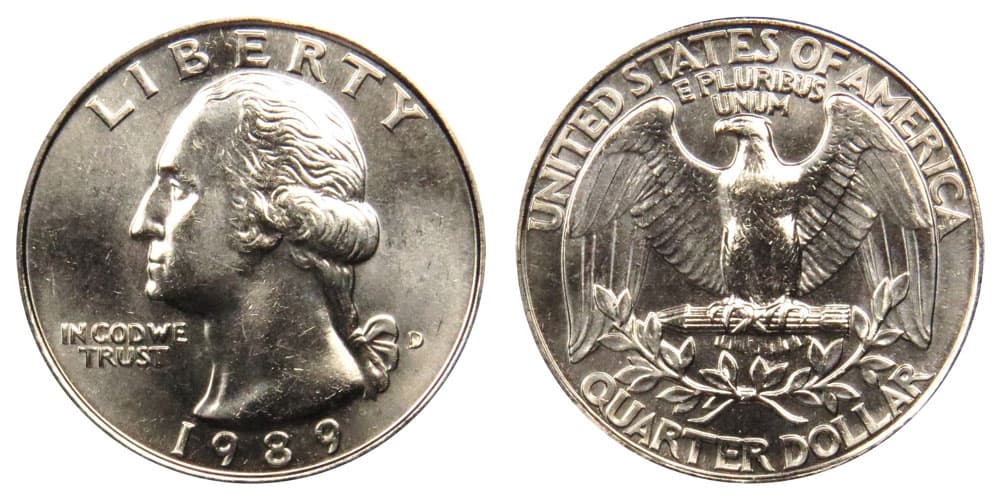 The 1989 quarters minted at the Denver facility have a D mintmark on the obverse. A total of 896,535,597 of these coins were minted that year.

The mint produced most Washington quarters in the 1980s; the 1989 quarter could have been better struck. These coins are extremely common and you will mostly find them in poor condition.

Examples of MS65 coins from this year are difficult to find. They are worth slightly more than face value, but you can obtain them inexpensively.

Finding 1989 quarters in higher grades ranging from MS66 and above is extremely difficult; there are less than a dozen known examples of exceptionally mint, uncirculated 1989 Washington quarters. 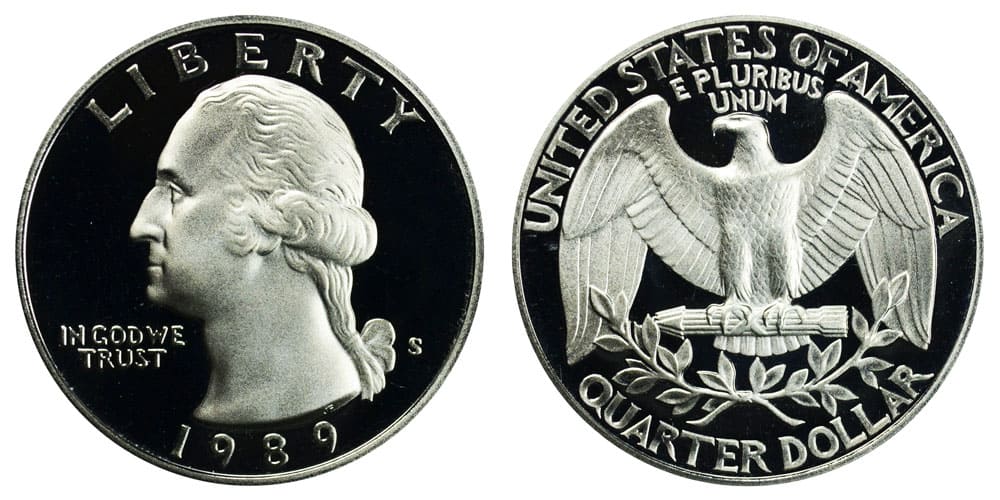 In 1989, the San Francisco mint produced 3,220,194 proof coins. Instead of releasing these into circulation, the Mint placed them in sets and sold them to collectors.

Proof coins from this year are relatively easy to come by, too. The best part is that these proof coins are worth more than face value and range between $1.15 and $70. 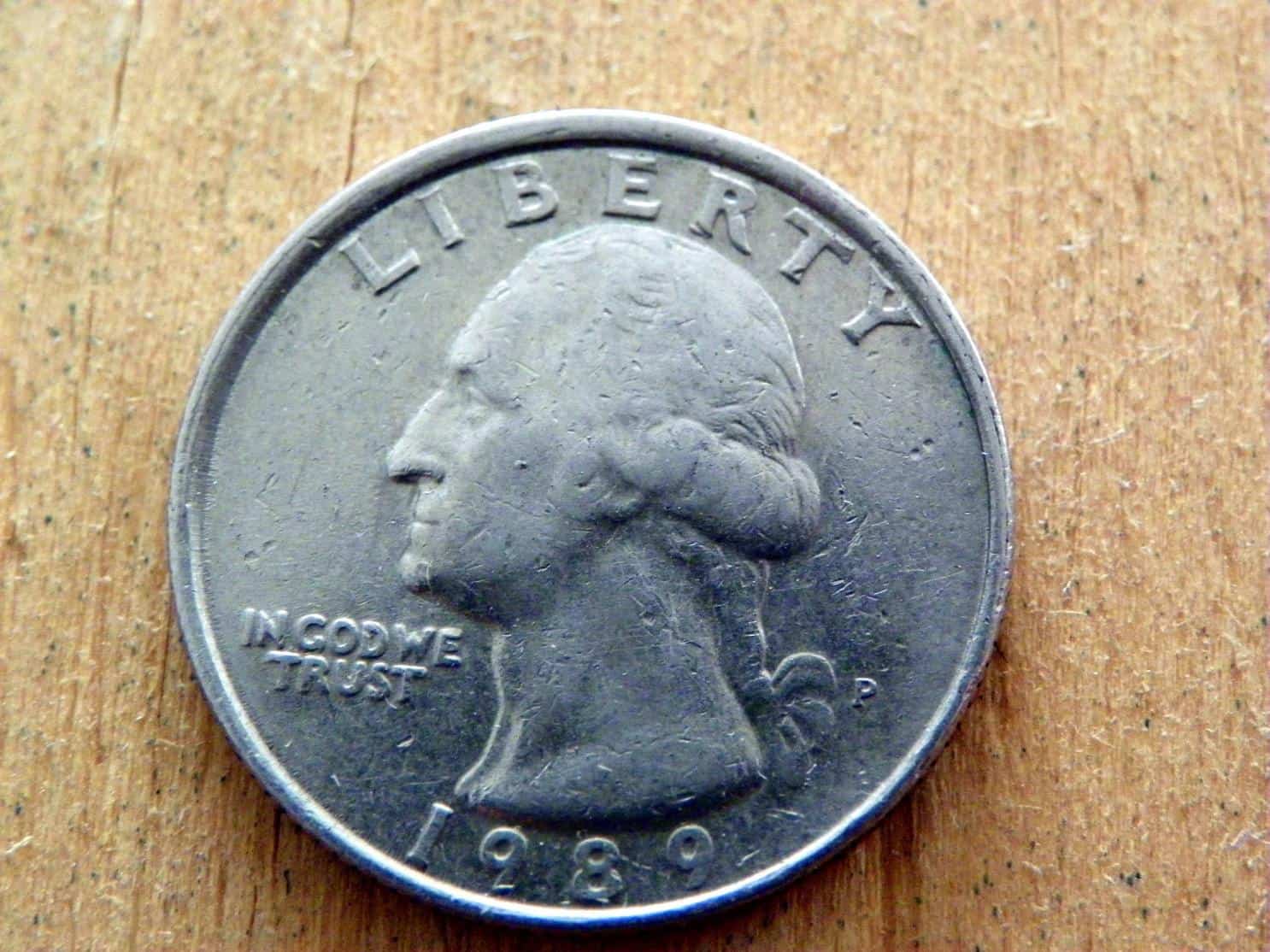 The truth is, most 1989 quarters are found in circulated condition and are generally worth face value. Interestingly, some of the most valuable Washington quarters from 1989 are imperfect and have glaring errors.

If you are keen on collecting high-value 1989 quarters, these are the errors you should be looking for that might be worth hundreds or thousands of dollars.

The doubled die error is one of the most valuable. Ideally, the more dramatic the error, the more valuable the coin will be.

There are only a few examples of 1989 doubled die errors that significantly alter the coin’s appearance. The existing examples have subtle doubling on the letters, and the coins are worth about $50 or more, depending on how visible the doubling is.

The off-center error is another popular variety. This error happens when the die strikes the blank planchet off-center, so some of the design is missing.

The value of the error will depend on whether the date is visible and the percentage of the missing design. A quarter with 5% to 10% of its design missing might be worth $20 to $30.

The 1989 quarters that have as much as 50% of their design off or missing are rare but these coins may be worth more than $100.

Broadstrike errors are quite interesting and may be worth some good money depending on the extent of the error.

This error occurs when the die strikes outside the collar holding the coin during minting. Striking the collar causes the stricken side of the coin to appear flatter, thinner and wider than normal, i.e. the coin appears broader than its actual size.

A broadstrike error is different from a coin whose edges are worn. Coins with worn edges are common and typically worth face value.

Inspect the coin thoroughly to ensure that it is a true broadstrike and has not been intentionally altered to smoothen the edges. A true 1989 quarter broadstrike is worth between $20 and $30.

Let’s now look at some common questions collectors have about the 1989 quarter value.

The 1989 quarter is quite common, given that the Mint released close to a billion such coins into circulation. Because they are common or easy to find even in pocket change, the circulated 1989 Washington quarters are generally inexpensive to buy. If you want to sell, you should sell these coins at face value because that’s how much they are worth. That said, you might need to part with a few dollars or several hundred if you want to buy a 1989 quarter in a mint, uncirculated state. You could earn a neat amount if you are selling mint state 1989 quarters.

What is a 1989 Washington quarter with no mintmark worth?

A 1989 quarter with no mintmark means it was manufactured in Philadelphia. If this coin has been in circulation, it is generally worth face value or slightly more at $2 to $8.50. There was an incident in which a no-mintmark coin was found in Boston, which is quite unlikely—most coins in the city have a D mark showing the coin was manufactured in Denver. After some investigation, numismatics discovered that the Boston coins that had been struck with no mintmark were actually an error and may be worth hundreds of dollars!

The most sought-after 1989 quarters are those in mint, uncirculated condition. These coins have a shiny, silky appearance, as though they have just come from the mint. However, these coins are extremely rare and only a few hundred examples of 1989 Washington quarters struck at the Philadelphia, Denver, and San Francisco mints are known to exist. It would be best if you also looked for errors such as doubled die, broadstrike and off-center, as these may increase the value of your 1989 quarter.

We're any quarters from 1989 mint marked with the letter p from the Philadelphia mint because I have 2 of them. But the way your article reads the p mint mark shouldn't exist. Could you please clarify this for me.