In the world of coin collection, certain years are known for their rarity and their highly sought-after errors. These are known as key dates, and it helps to familiarise yourself with the most important ones. Others are called conditional rarities because they have segmented criteria. 1989 is neither, but we’re still interested in authenticating the 1989 Penny Value.

The Lincoln Cent or Lincoln Penny was introduced in 1909, a hundred years after the birth of Abraham Lincoln. It was the first time an American President had appeared on American coins since George Washington had shot down the practice back when the republic began. He felt it was too pompous and imperial. But after Lincoln, lots of presidents were minted.

Eventually, even Washington himself was placed on a circulating coin, and he also popped up on several commemorative coins like the Presidential $1 coin and the commemorative $5 gold bullion coin. But let’s get back to Lincoln. From 1909 to 1959, his portrait was on the obverse (heads side), and the reverse (tails side) of the coin had two stalks of durum wheat.

Both these designs were done by Victor David Brenner aka Avigdor ben Gershon. And despite the controversy surrounding his accreditation, his initials were formally restored onto the coin in 1918. But starting 1959, a new reverse design was selected. It was done by Frank Gasparro, who was an assistant mint engraver at the time, and later rose to Chief.

This new reverse design featured the Lincoln Memorial Building, selected to celebrate 150 years since Lincoln’s birth. And while Gasparro had never been to the memorial in person, he did a fairly decent job of sculpting it. Not everyone agreed, but considering how popular the coin still is, his depiction was sufficient. The 1989 Penny is a Lincoln Memorial Penny.

Like all Lincoln Memorial Pennies, this 1-cent coin is eye-grabbing in high grades. If you find one in top condition, you can count the steps at the building entrance and spot Abe Lincoln’s seated statue peeking through those central pillars of the memorial. Let’s take a closer look. 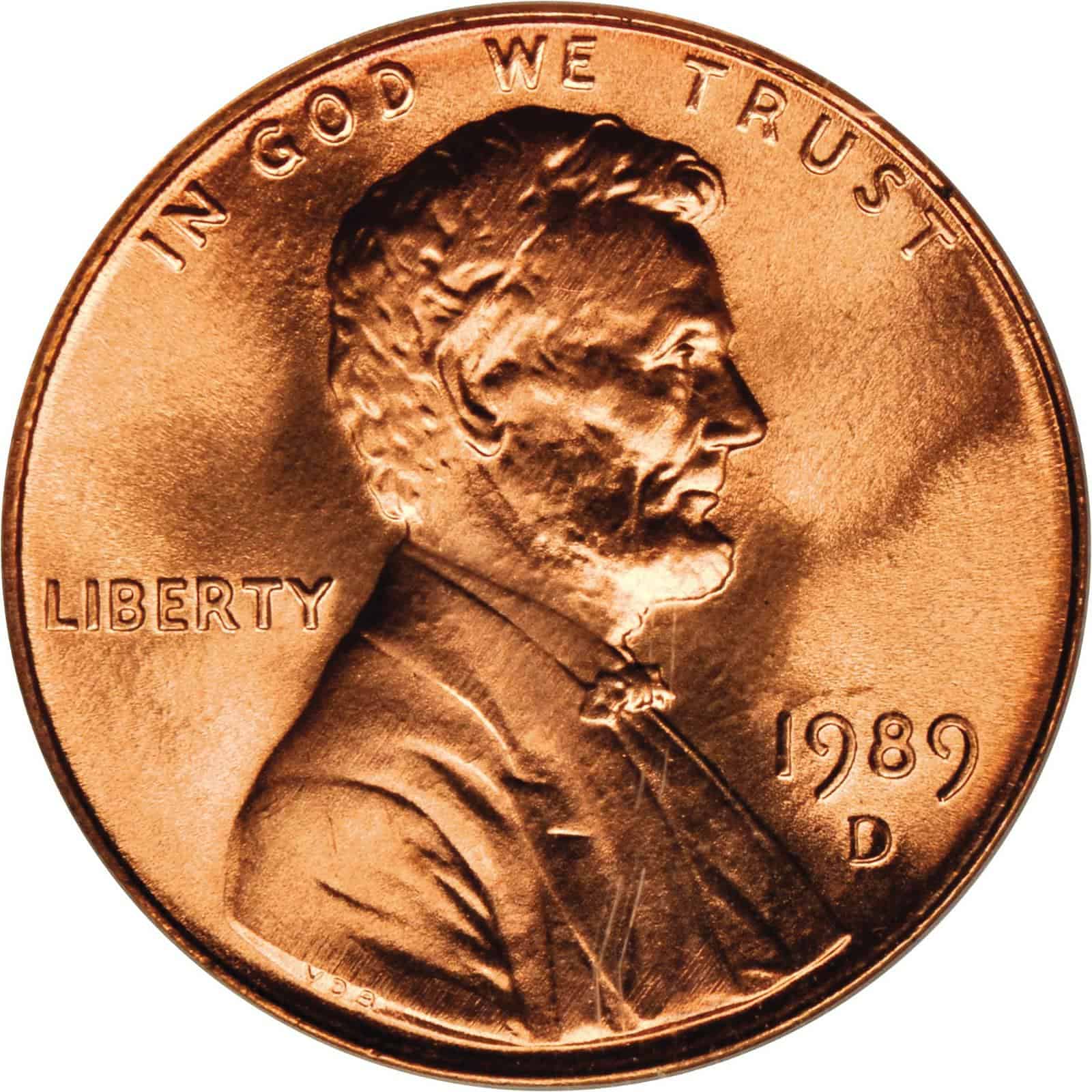 The obverse (heads side) of the 1989 Penny features the right-facing profile of Abraham Lincoln, the 16th President of the United States. This same portrait had previously appeared on a desk plaque made for Gorham Manufacturing in 1907. It was designed by Victor David Brenner, though intense media controversy kept his initials off the coin in circumspect years.

But in 1989, that coveted VDB appears at the shoulder cut-off. Above Lincoln’s head, the legend reads In God We Trust. Behind his back is the legend Liberty, and in front of his chest lies the mint year and the mint mark. Although the 1989 Penny is largely made of zinc, its outermost surfaces are plated with 2.5% copper to ensure that trademark reddish coloring. 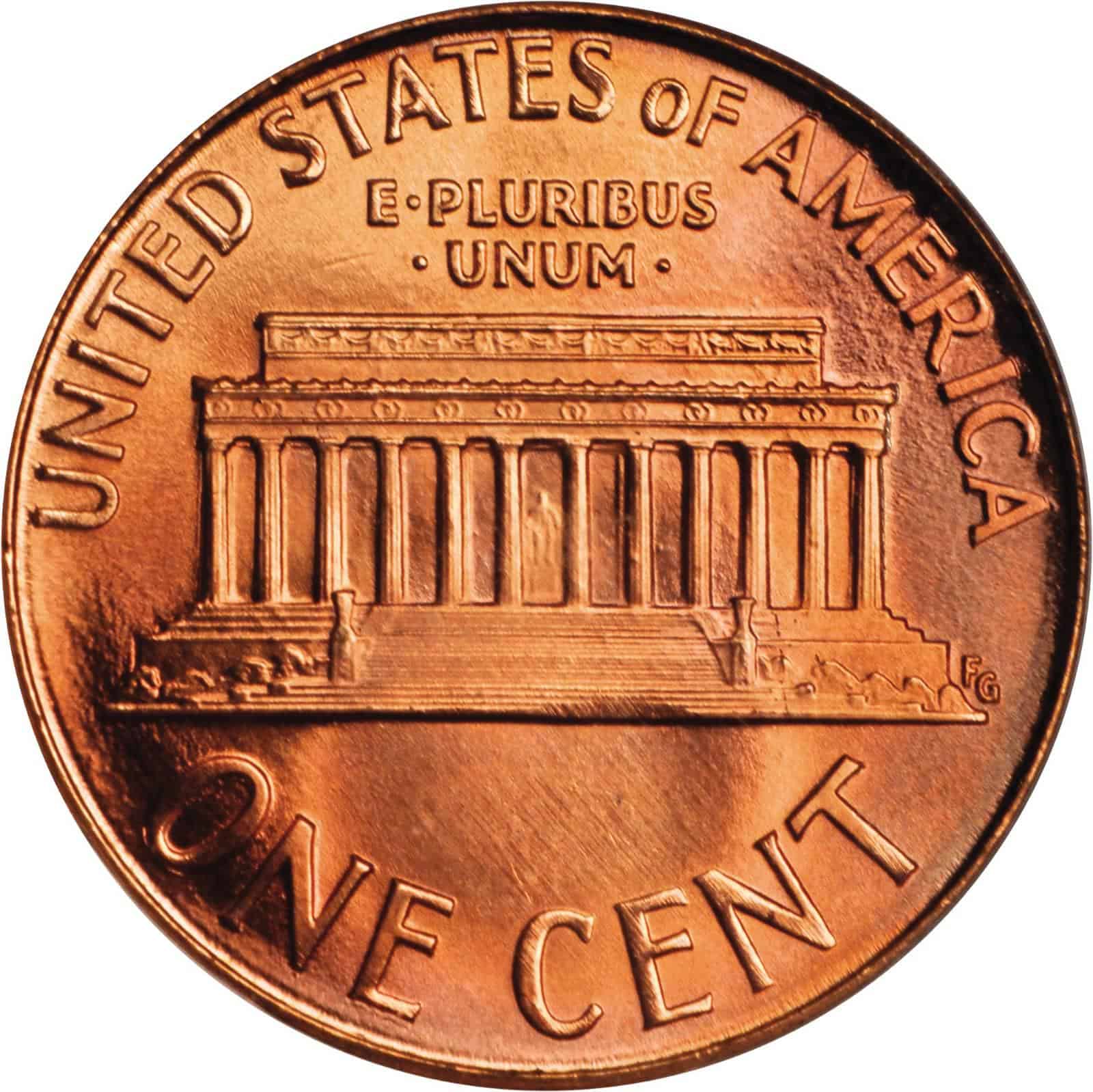 The reverse (tails side) of the 1989 Penny was designed by Frank Gasparro while was still an assistant engraver at the mint. You can find his initials, FG, on the right corner of the Lincoln Memorial. The building is perfectly centered, and the top of the coin reads United States of America, with E Pluribus Unum underneath. The bottom has the denomination, One Cent.

Other Features of the 1989 Penny

Sometimes, a penny is only worth its face value of one cent. Or for pre-1982 coins, it may be worth the melt value of its copper content. But depending on rarity, timing, and mint marks, you can get hundreds or even thousands of dollars in the secondary market. Let’s explore! 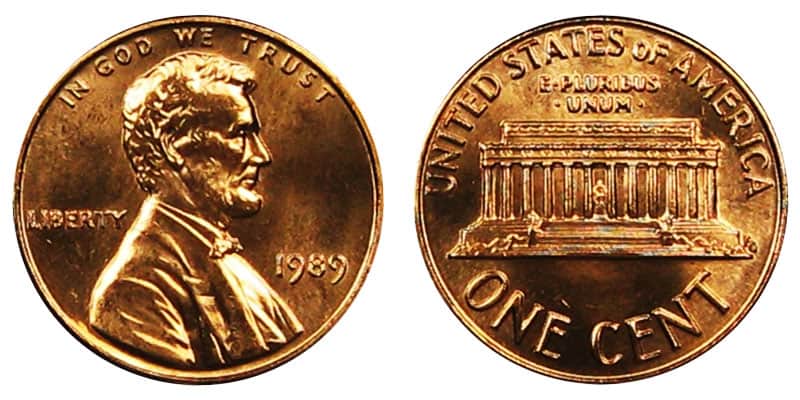 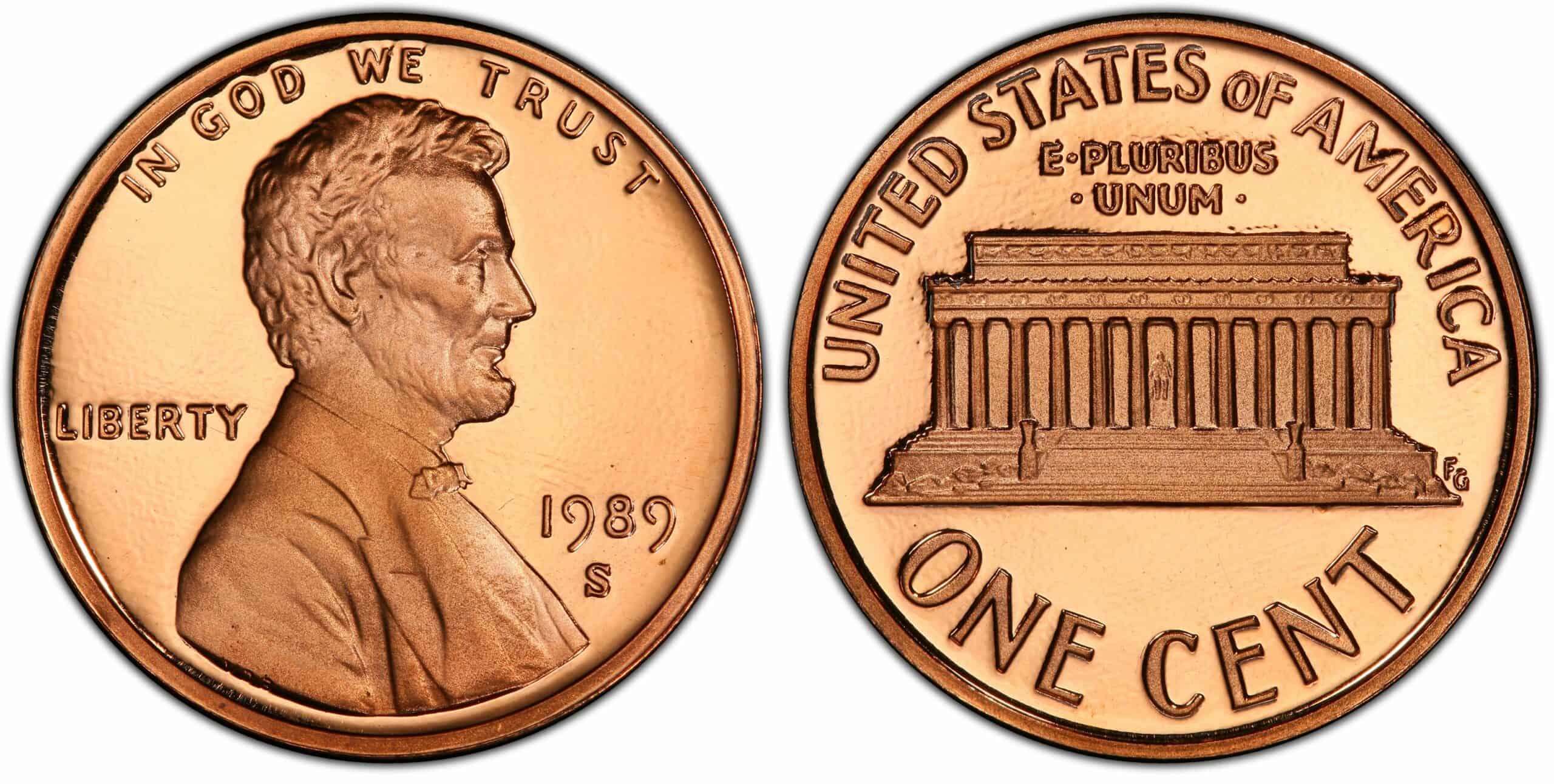 By 1989, the San Francisco Mint focused exclusively on proof coins. They differ from other coins because the planchet is burnished before punching and striking, ensuring that mirror-like finish. And the dies are treated with special chemicals to deepen the haze on the frosted device. The shiniest proofs are graded Deep Cameo or Ultra Cameo, often the first 50 to 100.

After that, the shine starts to fade, so subsequent coins may be graded Cameo if they have a strong enough contrast. In 1989, the San Francisco Mint made 3,220,194 Proof Pennies with the S Mint Mark. In the perfect grade of PR 70 RD DCAM, the coin was worth $37 in 2019. But prices vary depending on when you sell the coin, and some samples can go up to $300. 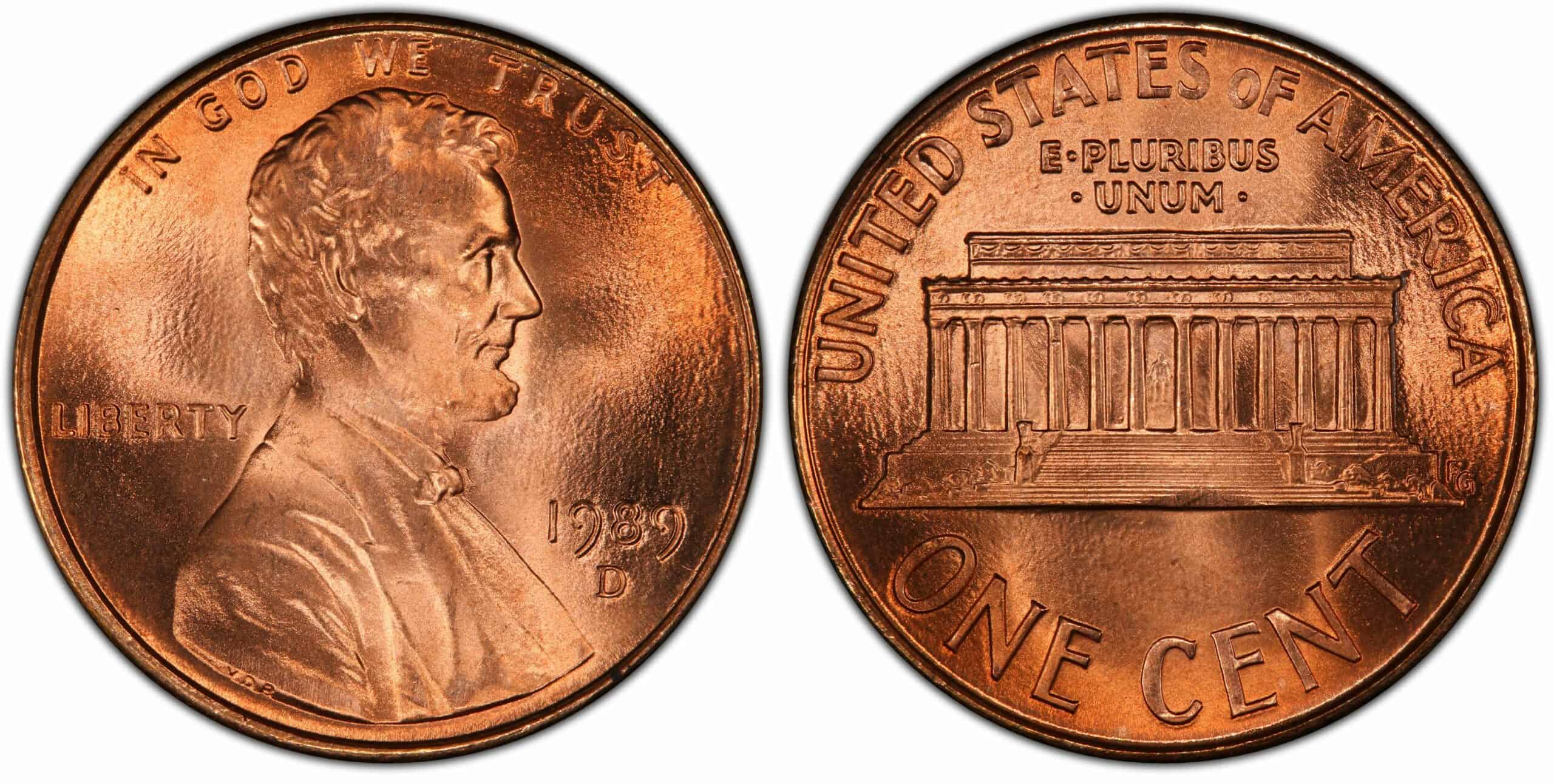 Pennies are graded according to their physical condition as well as their color. The latter starts with RD for red, the highest grade, followed by RB for reddish-brown, and finally BN for brown. But errors can add even more value to your 1-cent coin, so let’s look into a few.

Coins are minted on blank discs called planchets which are punched out of planchet sheets. Every sheet is calibrated with a designated metal composition and diameter according to its denomination. If a penny is struck on the wrong planchet, its weight, diameter, and color differs. One MS 67 penny struck 15% off-center on a dime planchet was worth $1,092.50.

A coin might be struck on a planchet of the wrong denomination. This could cause some of its features to be chopped off. But if the coin is struck on a coin that has already passed through the mint, it might show designs from both coins. This MS 66 penny was struck on a clad dime with its faces flipped. You can see Dime and America on the front! It sold for $998.

Ordinarily, the planchet will lie flat inside the machine and be struck several times to ensure all the coin’s details come out clearly. But if the planchet’s positioning was wonky, it might bend or fold during the first strike and continue to flatten with subsequent strikes. In MS 66 RD, this penny was worth $1,233.75 in 2018, but another sample was down to $960 in 2021.

The previous double denomination error was aligned back to front. This one has the obverse on the obverse and the reverse on the reverse. But the penny was struck on a dime at a 90° orientation. So you can see a sideways Franklin Roosevelt underneath the upright Lincoln, and on the back, there’s a fasces under the Lincoln Memorial. In MS 65, it sold for $2,115.

Starting 1982, Pennies were struck on planchets that were 97.5% zinc coated with 2.5% copper. These lightweight coins only weighed 2.5g while earlier 95% copper coins weighed 3.11g. The mass of the coin is the clearest tell, and in MS 65 RD, this wrong planchet error sold for a whopping $7,500 in 2018. It earned this price because only one is known to exist.

As dies get older, they start to crack and break. This creates cracks and gashes that end up on any coins made with these aging dies, and the error is known as a cud break. It may appear as a narrow line or slash, or it may look like part of the coin was scooped or scraped out, leaving a hollow portion. In MS 67 RD, this cud error on the mint date sold for $90 in 2021.

DDOs and DDRs are some of the easiest errors to spot. They happen if the die shifts between strikes, causing doubling, tripling, or quadrupling on the die, which is then transferred to all coins minted with that damaged die. In some years, these errors can get expensive. But in 1989, doubled-die obverses and doubled-die reverses are only worth $10 to $15 in MS 65 RD.

If the die moves between hub strikes, you get DDOs, TDR, QDOs, etc. These are doubled-die, tripled-die, or quadrupled-die errors like the one we listed above. But if it’s the planchet that shifted between die strikes, you get an off-center error that’s categorized by the angle of its misalignment. This high grade 10% Off-Centre in MS 64 RD only sold for about $20 on eBay.

Grading a coin costs $30 (plus shipping) on the lower side, so unless you’re sure your coin is exceptional, you might go at a loss getting it graded. You’re better off doing a visual online assessment then posting it on eBay. One double-clipped coin was dramatically off-center, but its value came from the visible date that attracted 1989 collectors. It sold on eBay for $50.

1989 Penny Struck on a Dime Planchet

The difference between a wrong planchet error and a double denomination error is timing. A wrong planchet error occurs on a blank disc while a double denomination error is on a coin that has already been minted, so it will display the overlapping designs of both coins. This is a penny struck on a 10-cent blank so the top is partly chopped off. In MS 65, it sold for $370.

Think of coins in the minting machine as a conveyor belt system. The planchet punch drops blanks into the hopper, which feeds them into the mint. And each blank is struck multiple times. But sometimes, the die comes down before the previous coin has exited, so the two coins overlap. This can cause an indent, and this error was worth over $145 in MS 64 RD.

For a coin to be formed, the obverse die strikes the top of the coin, and the reverse die strikes the bottom. But if the system has the slightest delay, the two dies can sometimes bang into each other before the planchet is in position, so their patterns partially imprint each other. The next blank to be struck by either die could then have an error. But it’s only worth $20.

I think I have one of those rare pennies cuz it only weighs 2.5