Pennies are the most popular coins among collectors, whether you’re a pro or a newbie. And the 1988 Lincoln Cent was a Memorial Cent (1959 to 2008). It had the Lincoln Memorial on the back. Let’s study this iconic coin further so we can fully appreciate the 1988 Penny Value.

The Lincoln Cent or Lincoln Penny first showed up in 1909 to celebrate 1oo years since the birth of Abraham Lincoln, the 16th President of the United States. He was born on 12th February 1809, and this date is important to coin collectors because several redesigns were done to mark key anniversaries such as his 150th Sesquicentennial and 200th Bicentennial.

Anniversaries are also important for resellers because you can fetch better prices in those landmark years. The Memorial Cent, for example, celebrated Lincoln’s 150th anniversary by placing the Lincoln Memorial building on the back of the coin. This replaced the wheat stalks on the Wheat Penny that had been used from its inception in 1909 until the redesign of 1959.

Similarly, on the 200th anniversary in 2009, the Lincoln Memorial behind the coin was replaced by four commemorative designs that marked milestones from Lincoln’s life. These included the log cabin where he was born, his first job as a rail splitter, and his government work as a legislator. After this, we switched the (Union) Shield Cent that we still use today.

As you can see, the reverse (tails side) of the coin has changed several times, but the obverse (heads side) remained the same throughout. It was designed by Avigdor ben Gershon, better known as Victor David Brenner, the anglicized name he adopted when his family came to New York back in 1890. He took up the family trade from his dad – sealing and engraving.

But to boost his personal fortunes and expand his professional opportunities, he learned English, French, sculpting, and medal-making. He attended night school at two prestigious institutions – Cooper Union in New York and Académie Julian in Paris. The first was a college for Science and Art. The second was a private art school for sculpture and painting.

He then furthered his education on the job by working as an assistant to Augustus Saint-Gaudens. This prompted his big break because, in 1904, President Theodore Roosevelt expressed dissatisfaction with the state of US currency. In-house Mint Engravers often designed coins in traditional styles that were easy to reproduce and economical to mint.

But Roosevelt, the 26th US President, wanted coins to be pretty and artistic. He asked the mint to hire popular professional artists to do the job, starting with Saint-Gaudens. But this sculptor only managed to redesign the gold $10 and $20 coins (eagle and double-eagle) before succumbing to cancer. Several of his assistants stepped in to wind up the commission.

They included Brenner for the penny and James Earle Fraser for the Buffalo Nickel. But these coins faced multiple snafus as the Chief Mint Engraver, Charles E. Barber, clashed with these external artists that he felt were invading his territory. Barber was especially against the Lincoln Cent, and it got so bad that Brenner’s initials were removed from the 1c coin!

This was a personal affront since sculptors were always allowed to sign their coins, including the ones that worked for the mint! And just to show how serious this was, Brenner’s initials weren’t reinstated until the year after Barber died! Still, in December 1958, Frank Gasparro sculpted the Lincoln Memorial on the back of the coin. He was the Assistant Mint Engraver.

Gasparro won an internal contest between the in-house mint engravers, and it probably helped his career because he was later promoted to Chief Mint Engraver from 1965 to 1981. In that capacity, he designed several coins and medals including the Eisenhower and Susan B. Anthony Dollars, as well as the Kennedy Half Dollar. The 1988 Penny bears his reverse.

But while the public and the mint loved his design, his peers did not. The Treasury Secretary compared it to a trolley car while coin historian Walter Breen called it an artistic disaster. It’s worth noting that Gasparro never saw the memorial in person before he sculpted it. But it’s still a popular and visually pleasing coin, especially with the sharp definition of high grades.

Here’s a fun fact about US coins – the ones from Philadelphia never had mint marks and were classified as (P). However, war coins had a big P so they could easily be taken out of circulation later. And while other denominations started using the P Mint Mark in 1979, the penny didn’t earn its P until 2017. But it was only used for that year and disappeared in 2018.

This essentially means that while other 1988 coins carried the P Mint Mark, the 1988 Penny did not. As for proof pennies, they’re coined on pre-polished blanks using specially treated dies. This procedure means the first 50 to 100 coins have super-shiny backdrops and frosted images with deep contrast. These are graded Deep Cameo (DCAM). The next grade is Cameo.

Before we describe the features of the 1988 Penny, let’s review some jargon so you don’t get lost. The words on the coin are called legends or mottos while the images are called devices. Conversely, the backdrop is called the field. Coin designs are stamped on blank discs called planchets, and the stamping is done by striking with steel templates called working dies. 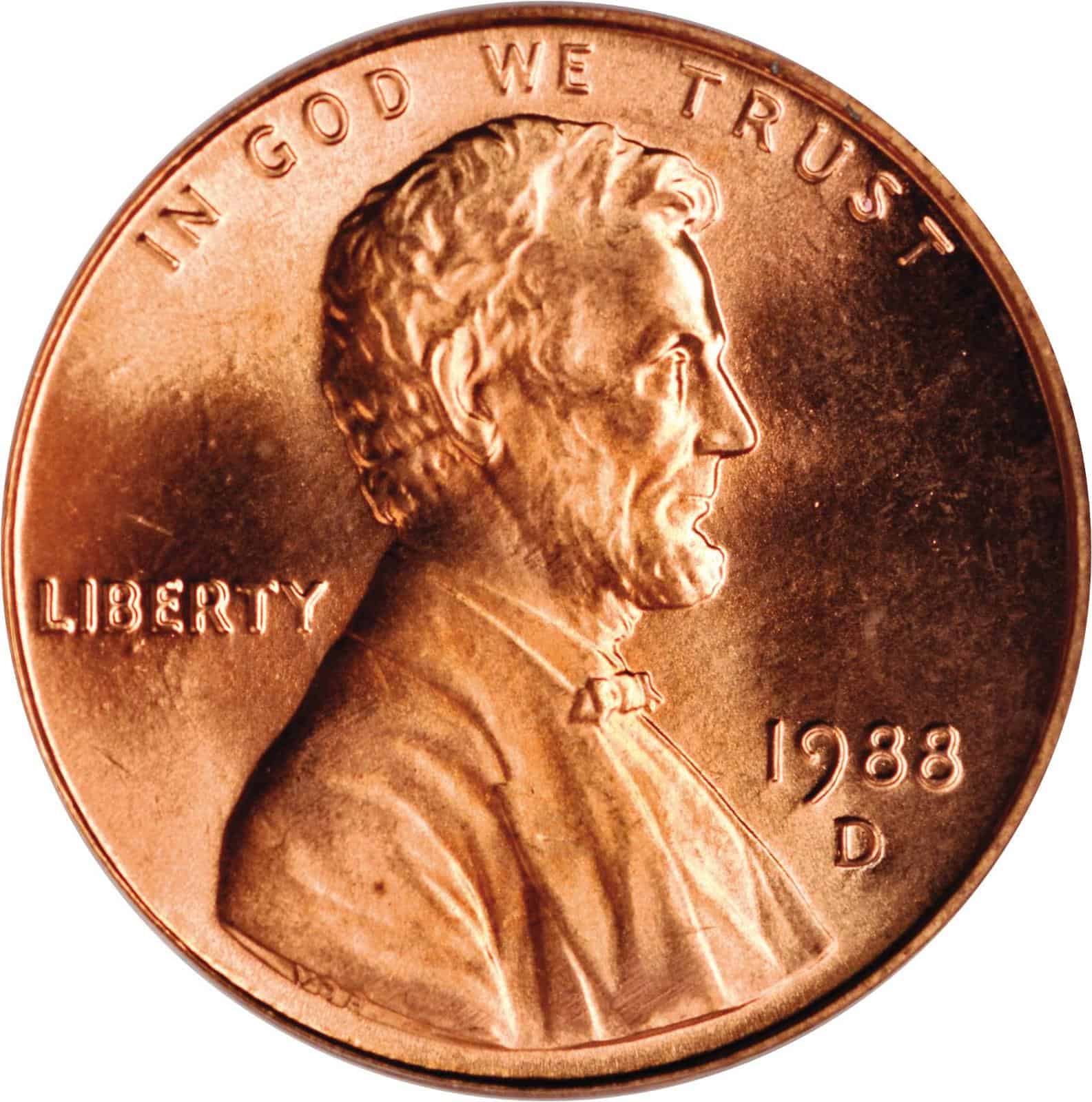 The obverse (heads side) of the 1988 Penny carries a portrait of President Abraham Lincoln. It faces right and was designed by Victor David Brenner off a device he had earlier used on a 1907 desk plaque for Gorham Manufacturing. VDB’s initials appear on the shoulder cut-off.

The top of the coin reads In God We Trust, with Liberty on the left, behind Lincoln’s collar. On the right side of the obverse, at about chest level, you’ll find the mintage date with the mint mark (S or D) directly below it. This mint mark was puncheoned by hand until 1989. 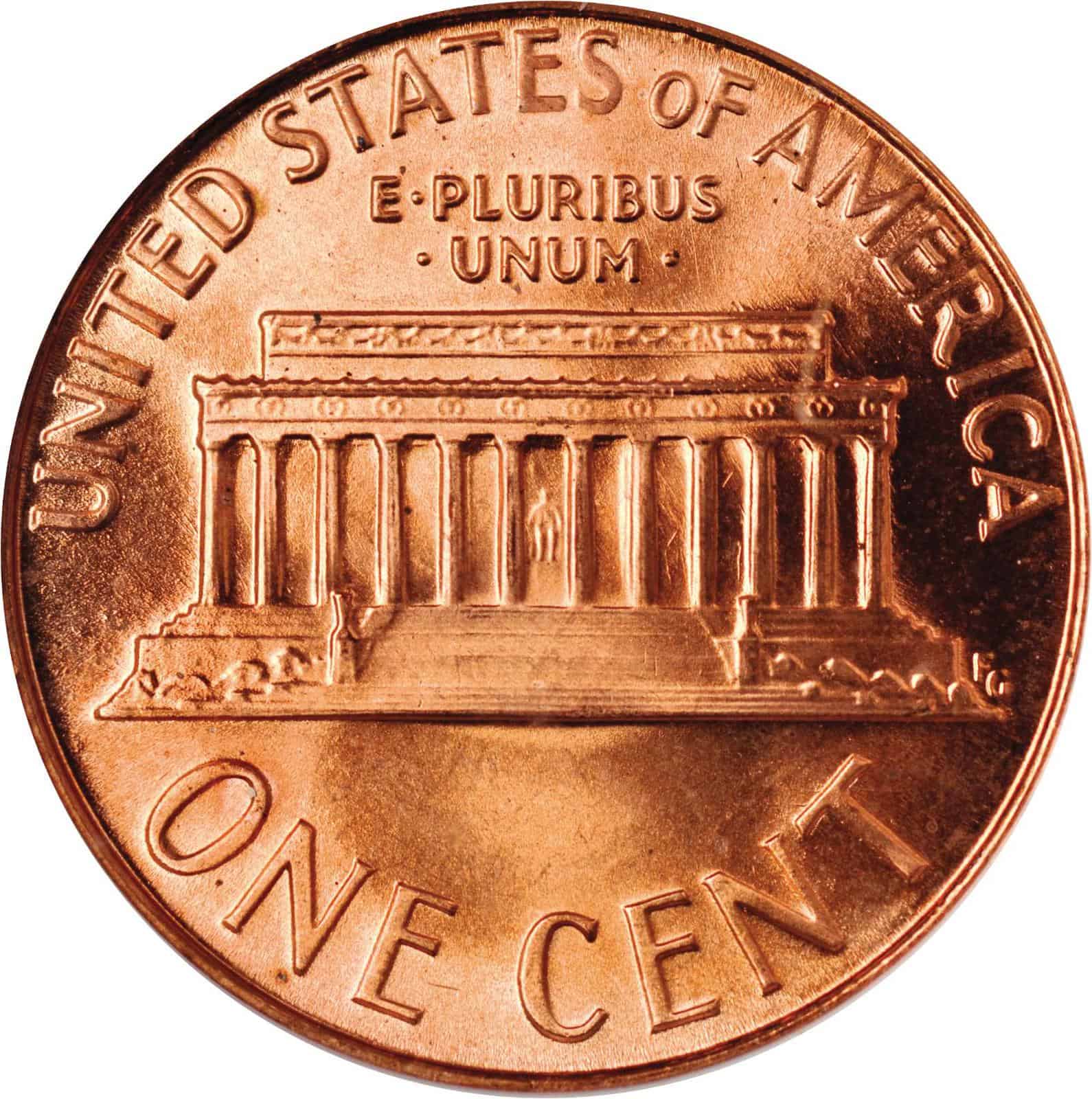 The reverse (tails side) of the 1988 Penny bears a head-on sculpture of the Lincoln Memorial. It was designed by Frank Gasparro, and his initials, FG, are on the right, at the corner of the bottom step. On high-grade coins, you can see Lincoln’s statue between the central columns.

The top of the coin reads United States of America with E Pluribus Unum beneath it in a smaller font. You’ll notice that the O in Of is smaller than the other letters, and there’s a dot between E and Pluribus, plus on both sides of Unum. The bottom of the coin says One Cent.

Other Features of the 1988 Penny

For reference, the earlier 95% copper cents weighed 3.11g while the steel war pennies were 2.7g, so the 1988 Penny is among the lightest set. That said, all Lincoln Cents have smooth or plain edges without reeds. They’re graded as RD (red), RB (reddish-brown), or BN (brown). RD is the most valuable grade, but unless they have errors, these pennies aren’t worth much.

As we just mentioned, 1988 isn’t a key year for Lincoln Cents. They have no precious metals and barely any copper. But San Francisco coins may draw some interest. More on that later. 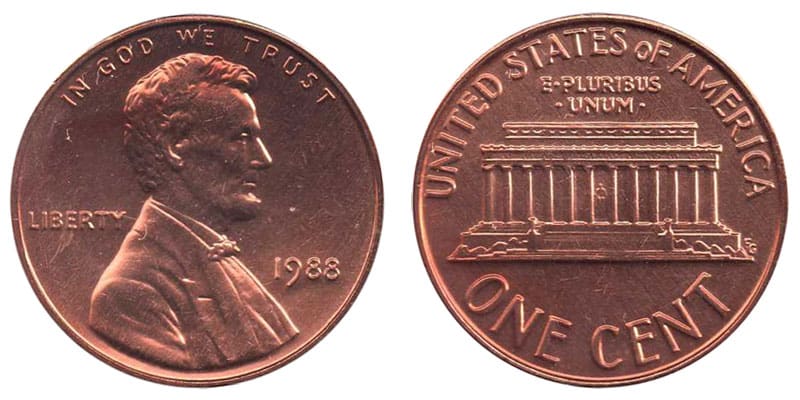 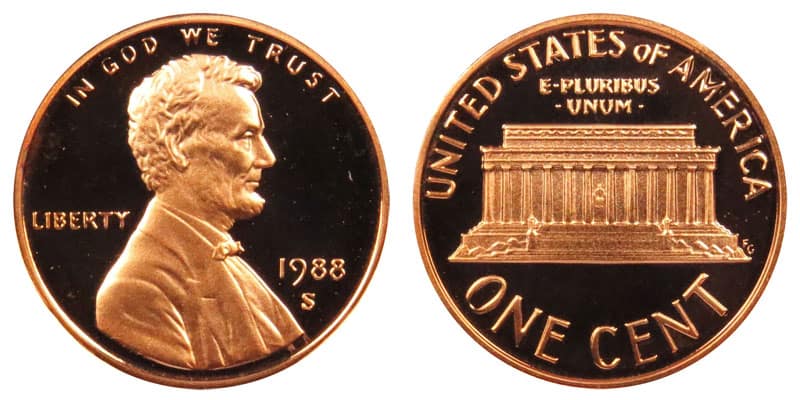 From 1955 to 1968, the coinage section of the San Francisco Mint was officially closed, so any circulating coins made there were designated (S) and had no mint marks. From 1968, it was the main source of proof coins, and this became almost exclusive after 1975. The 3,262,948 pennies coined in 1988 were all proofs. This was also the year when the mint regained status.

How so? From 1962 to 1988, it was known as the San Francisco Assay Office to maintain the integrity of its proofs. But on March 31st, 1988, it went back to being a mint, which is part of the reason these pennies draw so much attention. The perfect grade, PR 70 DCAM, sold for $1,438 in 2004. For PCGS, Deep Cameo is the highest grade while NGC’s is Ultra Cameo. 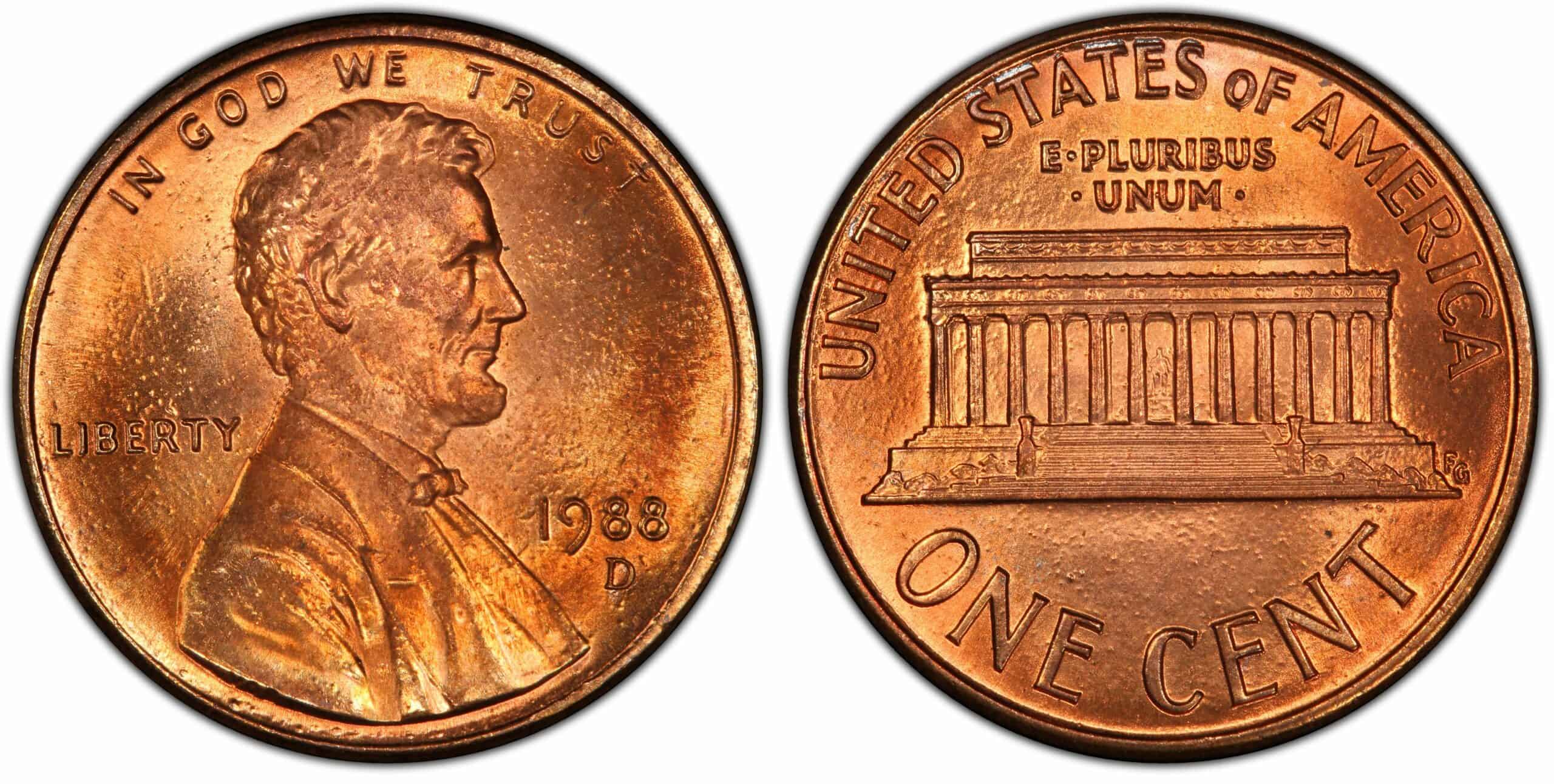 The most valuable coins from any year or denomination are the mint states in high grades. The second most valuable ones are error coins, though some flaws are more expensive than others. Let’s look through a few examples of these coinage mistakes and what they’re worth.

DDO means Double-Die Obverse. It happens because the hub has to strike the die several times to ensure the detailing is perfect. But if the die moves between strikes, it can cause a doubling or tripling error that will transfer to all coins made with that die. This DDO creates a visible doubling effect on Lincoln’s earlobe. In MS 66 RD, it auctioned for $3,120 in 2021.

DDO errors are often clearest on the letters and numbers of the coin, so check the dates and legends carefully. Some DDOs are visible at a glance while others need closer perusal with a jewel loupe or a coin microscope. If you spot DDOs on the date and mint mark, they count as two errors since the date was machined. They’re worth $30 in AU 50 and up to $75 in MS 65.

As we said earlier, 1988 was one of the years when mint marks were still manually punched. So if the staffer didn’t have a steady hand, you might see a D on top of another D aka D/D or D over D, but at a slight angle or with some overlap. You might see a D/S or vice versa if the coins were moved between mints. A D/D is usually $10 but an MS 65 RD was $305 in 2018.

Transitional errors happen when a coin’s design, font, style, or metal composition is about to change e.g. steel/copper in 1942 or bronze/zinc in 1982. This results in coins accidentally minted with the incoming or outgoing design. In 1989, the reverse changed slightly, so 1988 pennies with a 1989 reverse are transitional errors. In MS 64 RD, this flaw is worth $150.

Indent errors occur when something smashes the planchet while it’s being struck, creating a noticeable indent on the coin. It’s similar to a struck-through error, but it’s more drastic since a strikethrough (or struck-thru) might have an etching or shadow of the foreign object while an indent seems to scoop out a section of the metal. In MS 62 RB, the coin is only worth $19.

If the die shifts while it’s being struck by the hub, you can end up with a doubled-die, tripled-die, or quadrupled-die. But if it’s the planchet that shifts between die strikes, you’ll get an off-center error that leaves part of the coin blank. This 35% off-center error leaves 2/3 of the lower front and 2/3 of the upper back unmarked. In MS 64 RD, this penny sold for only $24.

Coins have planchets with varying metal compositions, based on the year and denomination of the coin. So if, say, a steel penny is struck on a copper blank, that’s called a wrong planchet error. But if a coin that’s already minted is passed through the machine again, it’s a double denomination error. This 1988 penny was struck on a dime, and in MS 68, it sold for $1,540.

Not especially. 11,346,550,443 copper-plated Lincoln Cents were coined that year. And in the world of numismatics, 1988 feels like last week. So these coins haven’t acquired the vintage they need to be rare or valuable. You can find millions of them in circulation at all grades.

Not really. The 1988 Penny is 97.5% zinc with a top coat of 2.5% copper. These are both base metals, and since the coin only weighs 2.5g, its melt value is negligible. So even in mint state, these coins are typically worth 30 cents, though you might get $5 or so for high proof grades.

I have one for sale .if interested, just message me, thanks