The 1985 quarter is known as a Washington quarter. But is it worth holding on to if you find one of these coins in your pocket change?

We’re going to answer that question. We’ll look at the 1985 quarter value, and the factors that influence how much individual coins are worth. And we’ll explore these coins’ history and design too.

Ready to find out how much your coin might be worth? Step this way!

History of the 1985 Quarter

The 1985 quarter is one of those known as Washington quarters. They get their nickname from the image on the obverse, George Washington, the first president of the USA.

The first Washington quarters were struck in 1932. That year marked 200 years since Washington’s birth. At that point, the coins were made mostly of silver. But rising silver prices in the 1960s put paid to that.

More and more people were hoarding the coins instead of spending them. With the value of their metal content increasing rapidly, the hope was that they would soon be worth more as bullion than their face value.

The Mint couldn’t continue producing coins that were not being used. And production costs were rising too. So in 1965, the silver quarter was replaced by one made from copper and clad in a mixture of copper and nickel. The cladding maintained the quarter’s silver color.

Changing the metal meant that some changes were needed to the design too. The areas of higher relief were lowered so that all the design details could be stamped onto the harder coin.

In 1974, other small changes were made, sharpening some areas of the design. Other minor modifications continued to be made over the next twenty years.

The 1985 quarters from Philadelphia are amongst the earliest coins from that facility to carry the “P” mint mark. Philadelphia had not used mint marks on quarters (and most other coins) until 1980.

Features of the 1985 Quarter

The Obverse of the 1985 Quarter 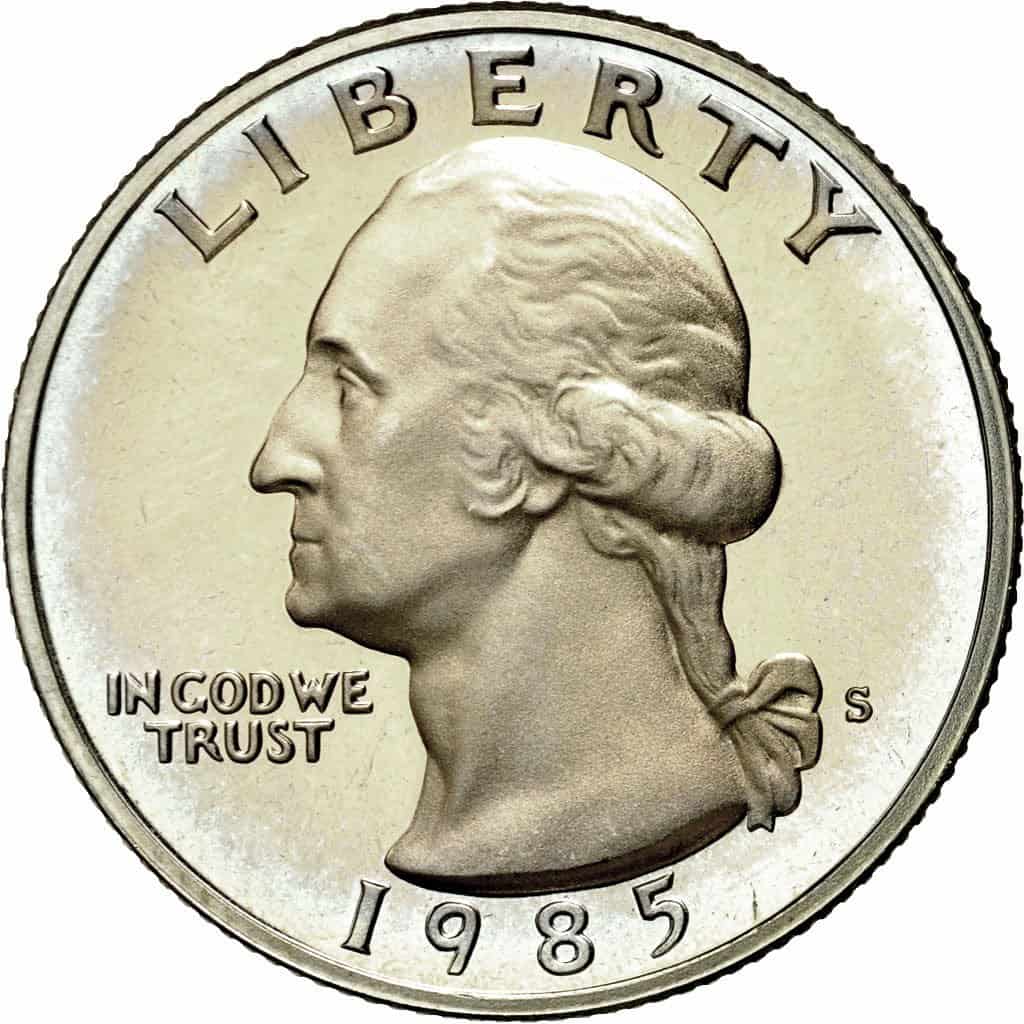 The obverse of the 1985 quarter is what gives it the nickname of Washington quarter. It shows the bust of George Washington in profile facing left.

The portrait was sculpted by John Flanagan, and it’s a choice that’s been the subject of hot debate over the years.

The original plan to commemorate 200 years since Washington’s birth had been to produce a special edition half dollar. That would have been minted in 1932 only.

A committee had been set up to oversee arrangements for the bicentenary. And they had already selected a portrait for the half dollar by another artist, Laura Gardin Fraser.

But when the plans changed to a permanent quarter with Washington’s image, the decision became the Treasury Secretary’s.

The man in question, Andrew W. Mellon, preferred Flanagan’s image. And although he’d left office by the time the coin was launched, his successor refused the committee’s pleas to reopen the decision.

Both Flanagan’s and Fraser’s images were based on a bust by the French sculptor Jean-Antoine Houdon. This was considered the archetypal Washington image. Flanagan’s portrait is clearly the same man, but he has added a large roll of hair to the back of his head.

The word “Liberty” appears above the portrait, and the date is at the bottom. To the left of the coin, alongside Washington’s neck, is the motto “In God We Trust”.

All 1985 quarters also have a mint mark on the obverse. Look for a small “P” for Philadelphia, a “D” for Denver, or an “S” for San Francisco. It appears towards the right-hand side, level with the ribbon around Washington’s hair.

The Reverse of the 1985 Quarter 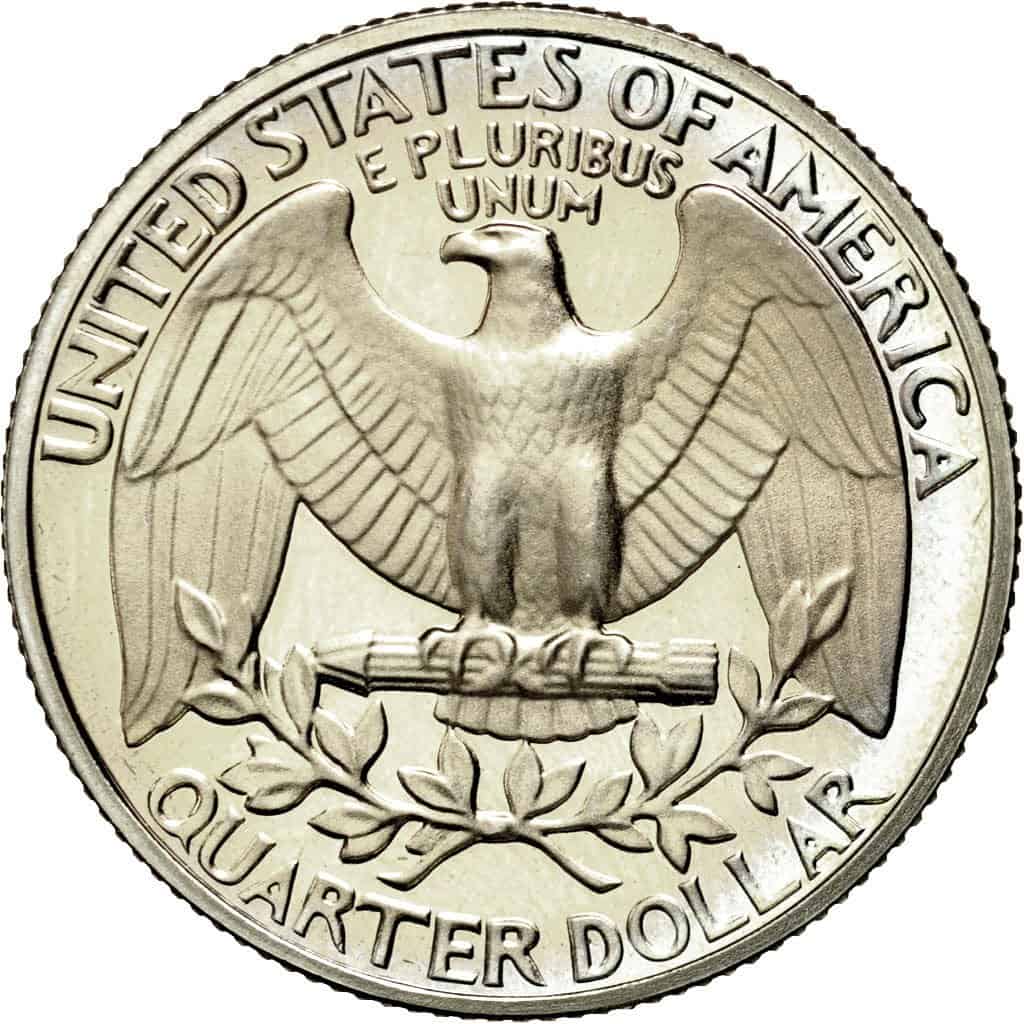 The design for the reverse of the 1985 quarter was also created by Flanagan. It shows an eagle, the traditional emblem of the USA, perched on a bundle of arrows. An olive branch for peace appears below.

The eagle takes up most of the coin surface, leaving just enough space for text at the top and bottom. Immediately above its head is the Latin motto “E pluribus unum”, which means “From the many, one”. It’s a reference to the states coming together to form the USA.

Above the motto is the name of the country, following the curve of the coin edge. The denomination runs along the bottom edge of the coin, written in full as “QUARTER DOLLAR”.

In earlier mintages, it’s possible to spot a difference between the reverse of business strikes and proof coins. On proofs, the letters “ES” in “STATES” are separate and distinct. In business strike coins, they almost blur together.

Proof quarters were struck in 1985 at the mint facility at San Francisco. By then, however, the difference between the proof and business strike reverses had been eliminated.

Other Features of the 1985 Quarter

The 1985 quarter has a diameter of 24.3 millimeters. The silver quarters produced until 1965 weighed 6.25 grams. But the copper clad versions were slightly lighter, and 1985 quarters weigh only 5.67 grams.

Turn one on its side, and you’ll see it has what’s known as a “reeded edge”. The reeds are a series of parallel grooves along the edge of the coin, running at right angles to the faces.

These were originally introduced to coins in the eighteenth century. The idea was to make it obvious if precious metals had been shaved from the coin edges, reducing their value.

This YouTube video from DC Coin World looks in detail at a 1985 quarter from Philadelphia. 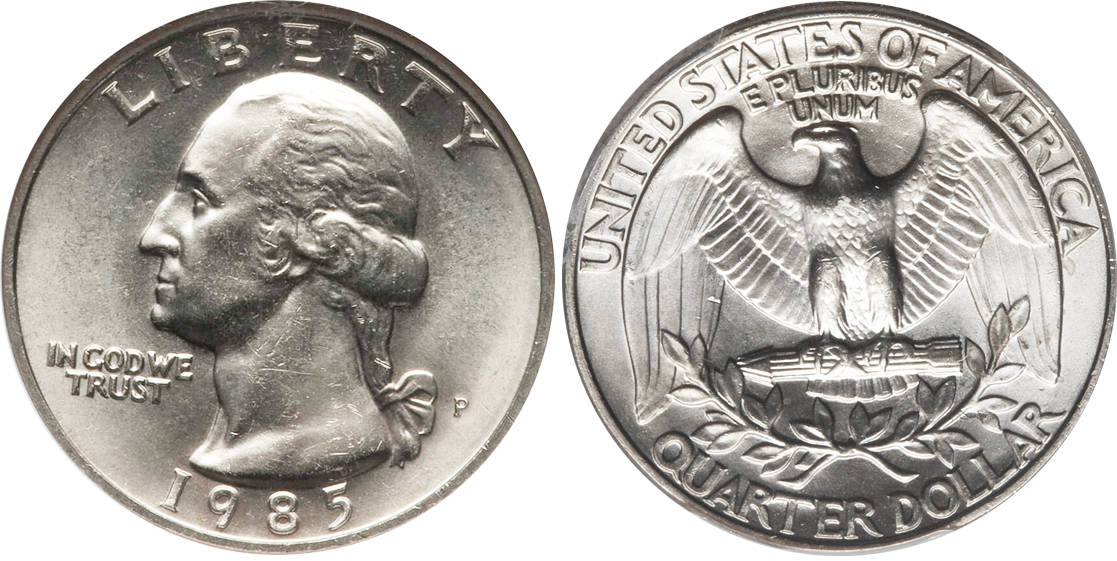 The 1985 quarter minted in Philadelphia can be identified by its mint mark. Look for a “P” near the right-hand side of the coin, just level with the bottom of Washington’s braid.

The Philadelphia facility struck almost 776 million of these quarters in 1985. So tracking one down won’t be difficult. Finding one in excellent condition, however, is another matter entirely.

Circulated coins are generally worth only their face value. The exception is if they show an interesting mint error – and we’ll talk more about those later.

Even mint state coins can be very modest in their value. The lowest mint state grade, MS60, is valued at just $1 by the independent coin graders the PCGS.

The better the condition, of course, the rarer the coin and the more valuable it will be. At MS65, the lowest grade for a “gem quality” coin, the value rises to $12.

1985 saw fewer quarters struck in Denver than in Philadelphia. But that doesn’t make a Denver mint mark scarce. Almost 520 million coins still emerged from the presses that year.

Just as with 1985 Philadelphia quarters, then, the value of circulated coins is usually no more than 25 cents. (As ever, an interesting error will add value.)

At MS65, the Denver quarter has a slight premium over the Philadelphia one. The PCGS places its value at $16, compared to $12 for the Philly equivalent. At MS67, though, the value is markedly lower – $550 compared to $775. So why is that the case?

The answer is that for 1985 Philadelphia quarters, an MS67 is a best-in-class coin. For Denver quarters though, two coins have been graded at MS67+. They’re valued at $4,250 apiece. 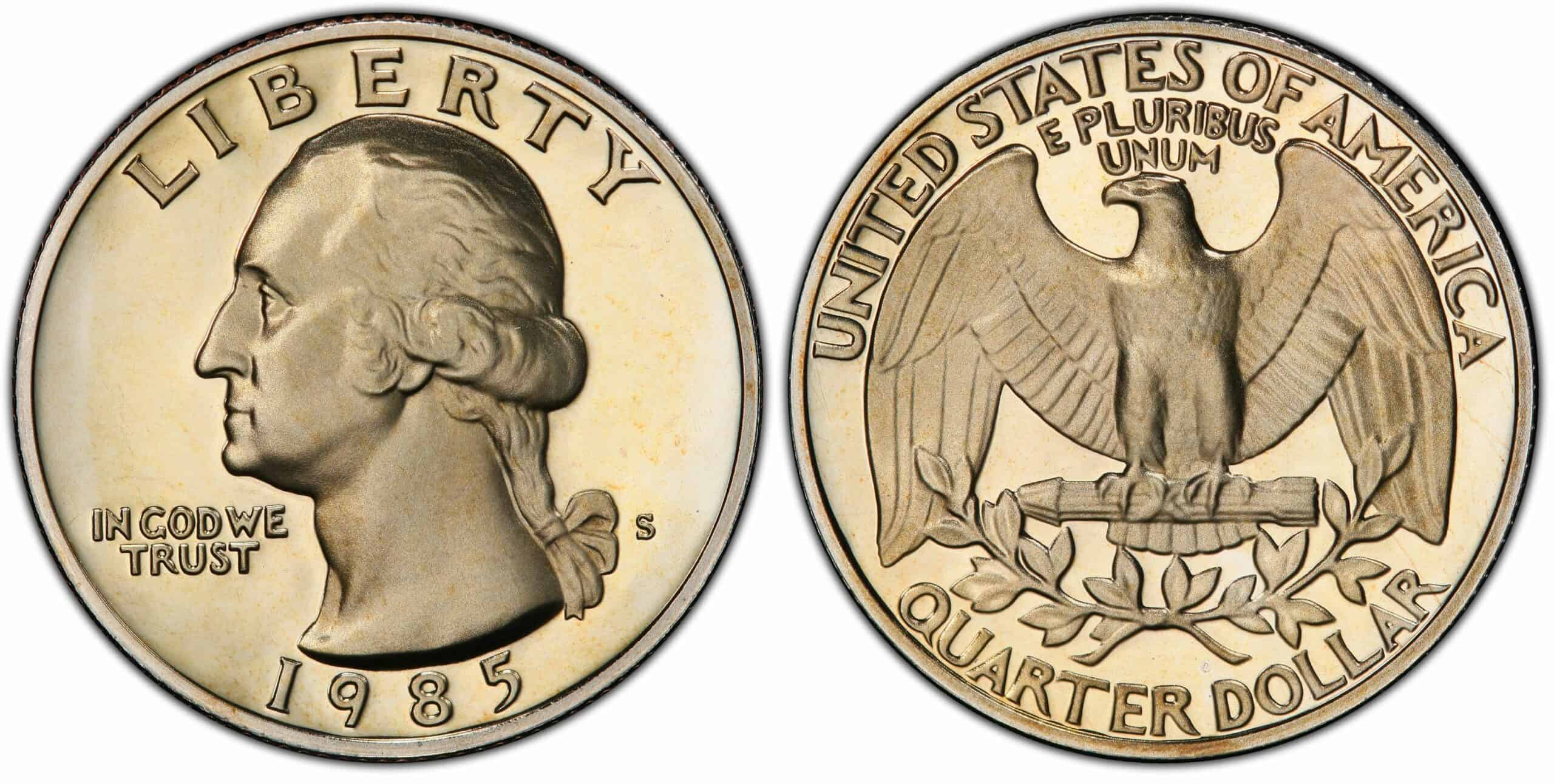 The quarters struck in San Francisco in 1985 were all proof coins. These are coins struck to high standards on carefully prepared planchets and with special dies. They’re designed to achieve exceptional detail and beauty, and they’re aimed primarily at coin collectors.

3.36 million proof quarters were struck in 1985, so numbers are dramatically lower than for business strikes. And all the coins are what’s known as deep cameos – the best of the best, with beautiful contrast between glossy fields and frosted devices.

But despite all this, their values are modest.

That’s because these coins were marketed as collectors’ items. The people who bought them generally stored them away carefully. So they’re not difficult to find today. And because scarcity drives value, that means prices aren’t as high as you might expect.

Proof coins have the prefix PR to their grading. A proof 1985 S quarter graded PR61 is valued by the PCGS at only $6. And values increase only slowly through the grades.

Even a near-perfect PR69 deep cameo quarter is only worth about $16. And an unbeatable PR70 deep cameo is valued at $50.

Owning one of these coins, then, won’t mean you can give up your day job! But it does provide an opportunity to enjoy a superior quality coin for a very modest outlay. 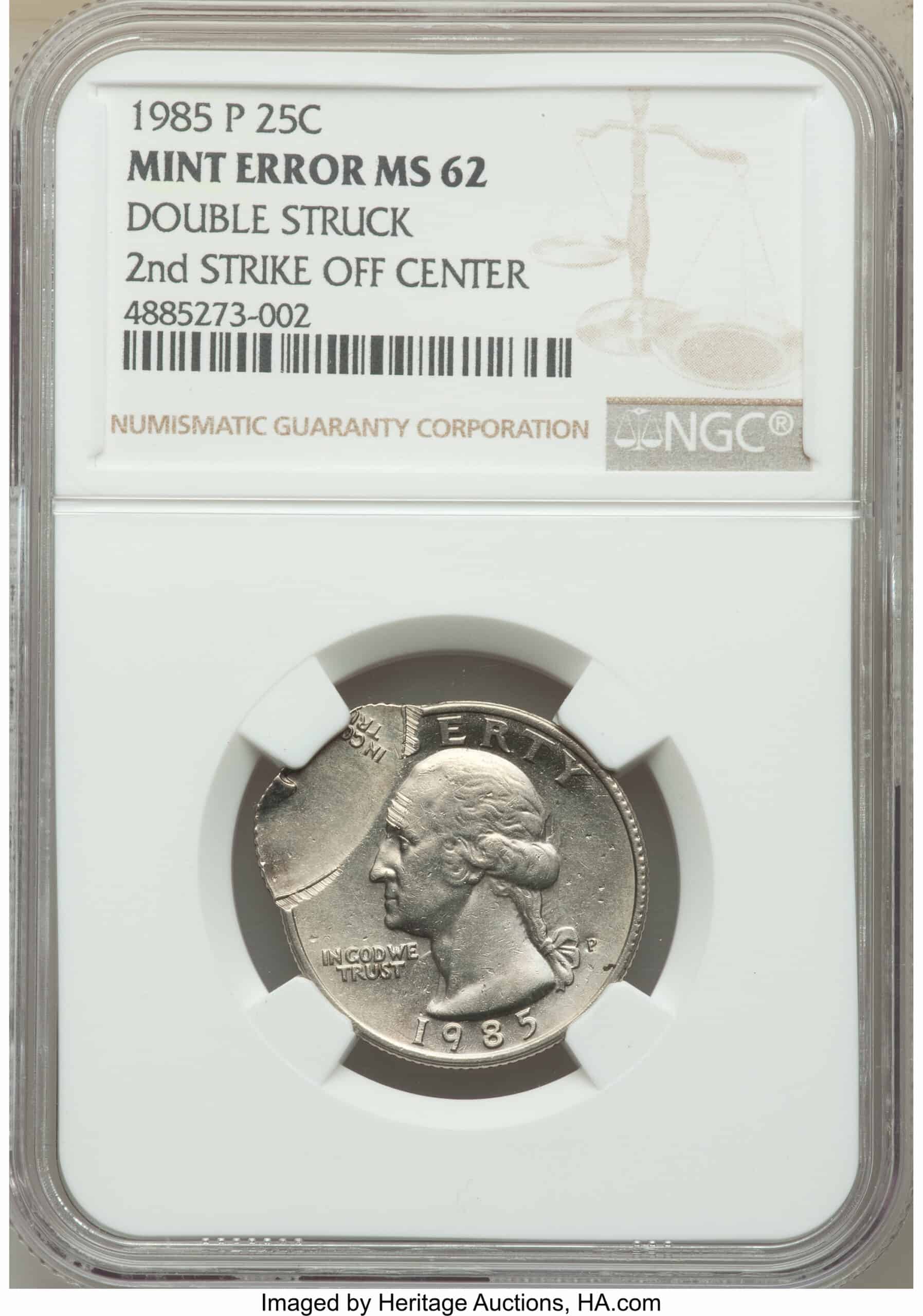 Doublestruck coins are an error that occurs when a coin isn’t ejected from the press after it’s been struck. As a result, it’s struck for a second time. And in the case of this particular 1985 quarter from the Philadelphia mint facility, that second strike was significantly off-center.

Collectors tend to like off-center strikes, and this one was dramatic. It was graded MS62 by the NGC, and it sold at auction for $190. Another coin with a similar error at the same grade achieved an auction price of $250.

(1985) Doublestruck, Both Strikes Off Center

Sometimes both the first and second strike of a double struck coin are off center. That was the case for one 1985 quarter. You need to look closely to spot that it’s dated 1985 – most of the final digit is missing.

It’s a very unusual looking coin. The two strikes sit at the top and bottom of the planchet, with an area of blank metal between them.

It was graded AU58 (about uncirculated) by the NGC. And it sold at auction for $280.

Sometimes planchets just aren’t ejected from the press – even after two strikes. In this case, you’ll get a multistruck coin.

One multistruck example of a 1985 Philadelphia quarter came up for sale at auction. To the untutored eye, it looks a bit of a mess!

But as a rare error graded MS66 by the NGC, it was highly desirable to collectors. It crossed the block for over $800.

The Philadelphia mint provided another multistruck error coin with a difference. In this case, the coin had been struck three times. And every one of those strikes was off-center.

The result was a dramatic (some might say striking!) looking coin. It was graded MS65 by the NGC. And it was sold at auction for $760.

Take a look at this YouTube video from Couch Collectibles to learn more about 1985 quarter errors, what they look like, and how much they’re worth.

In short, no. Hundreds of millions of them were made, so finding one isn’t a red-letter day. But some specific examples are rare.

Coins with a mint error, like those struck off center or struck multiple times, are rare. And uncirculated coins – those referred to as mint state – are rarer too. The finer the quality of the coin, the more of a rarity it will be.

What makes a 1985 P quarter valuable?

1985 quarters marked with a “P” were struck at the mint facility at Philadelphia. More coins were struck there than at either of the other two facilities employed in making 1985 quarters, Denver and San Francisco.

I have a 1985 P with what looks like 2 to 3 ridges around the rim of the face. There is a slight indentation that cuts through some of the lettering of Liberty cutting into the R-T-Y then fading until it picks up again on the other side of the L. From what I can see using my Loupe is it only effects the Obverse side.

I have an 85 P but the one I have George has a hole in his neck! Value anybody??