The quarter struck in 1983 was known as a Washington quarter. It’s a series of coins that’s still being produced today. So is there anything about this mintage that’s special? And if you have one of these coins, could it be valuable?

That’s what we’re going to find out! We’re going to explore the 1983 quarter value. And we’ll look at the different factors that separate a collectable coin from the rest.

History of the 1983 Quarter

The Washington Quarter was first minted in 1932. It was produced to celebrate the bicentenary of the birth of George Washington, the first president of the United States. And back then, the coin was made mostly of silver.

That changed in 1965. The price of silver was rising rapidly, and people had begun hoarding the coins, hoping to make a profit on the metal content.

At first, the Mint responded by continuing to strike coins dated 1964 into 1965.  More 1964 coins, it was hoped, would prevent people holding onto them.

But that didn’t work. In June 1965, President Lyndon B. Johnson announced that silver would no longer be used in dimes and quarters. Instead, they would be made of copper clad in an alloy of copper and nickel to give them a silver color.

The amount of silver in the half dollar was also to be reduced from 90 to 40 per cent.

The design of the quarter was modified to adapt to the new composition. The relief was lowered, making it easier to get the best possible detail in each coin.

At first, the new clad quarters were struck without mint marks. But from 1968 onwards, San Francisco and Denver added their marks (S and D respectively) to the reverse.

1983 quarters for circulation were struck at Denver and Philadelphia. The San Francisco mint facility struck proof coins, coins with exceptional detail, targeted at collectors. By 1983, coins from all three facilities could be identified by the mint mark on their reverse.

Features of the 1983 Quarter

The Obverse of the 1983 Quarter 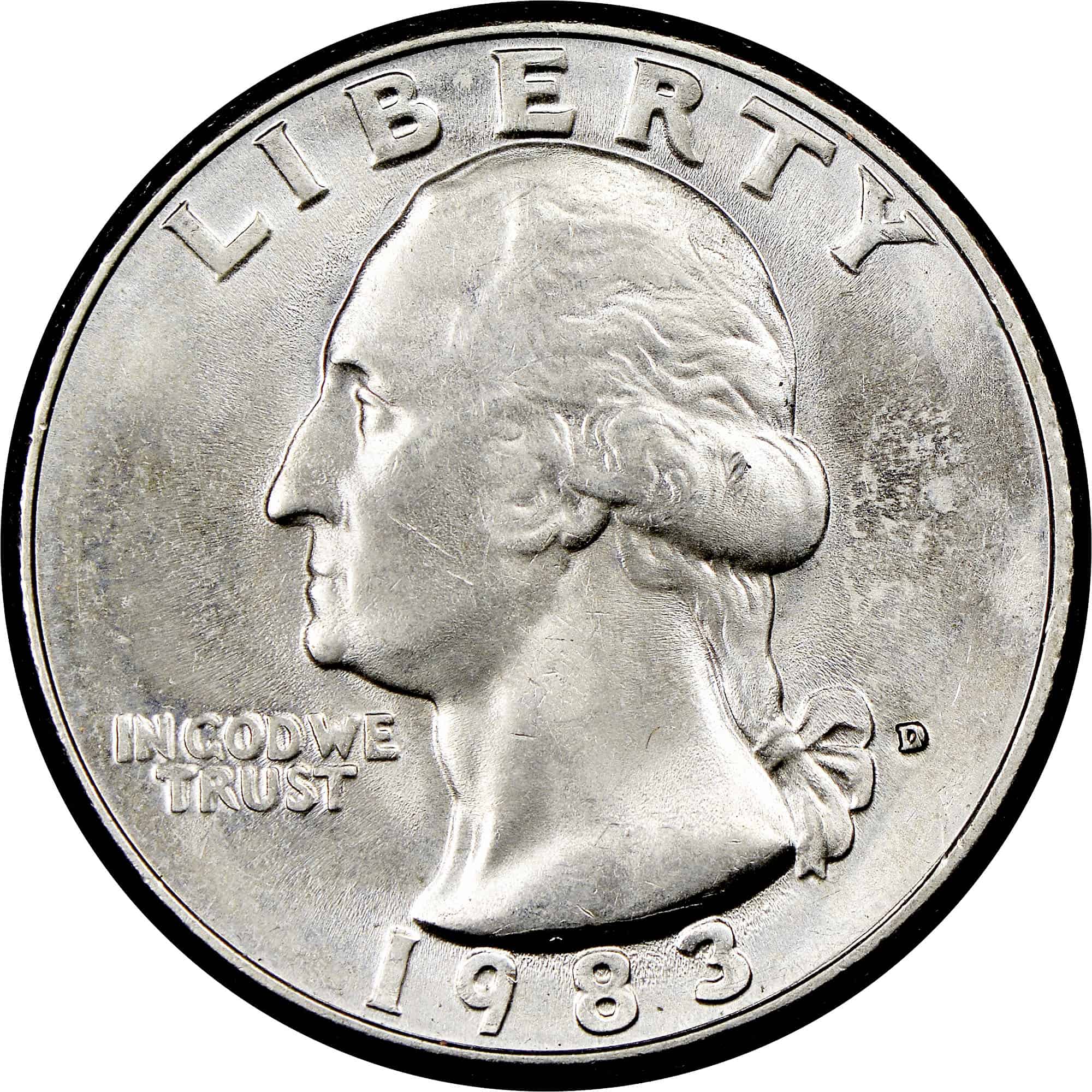 The obverse of the 1983 quarter carries the portrait of George Washington, the first US president. The image is the work of a sculptor named John Flanagan. And its choice has been the subject of considerable controversy over the years.

That’s because the coin originally intended to commemorate Washington was a half dollar. A bicentennial committee had been established, and it had selected a portrait by Laura Gardin Fraser for the coin.

But then it was decided that, instead of a single commemorative half-dollar, Washington’s portrait would appear on all future quarters. The committee recommended that Fraser’s design still be used, but the Treasury secretary, Andrew W Mellon disagreed.

Mellon preferred Flanagan’s image. He had stood down from his role before the coin was issued. But his successor, Ogden L. Mills, declined to reopen the matter.

Flanagan’s Washington, like Fraser’s, was based on a bust of Washington by the French sculptor Jean-Antoine Houdon. Washington is shown in profile facing left. He has a large roll of hair not present on the Houdon bust.

The word “Liberty” follows the top edge of the coin, while the date is at the bottom. The words “In God we trust” appear to the left of Washington’s neck. The mint mark is to the right of the bust, just level with the ribbon that secures his braid.

The Reverse of the 1983 Quarter 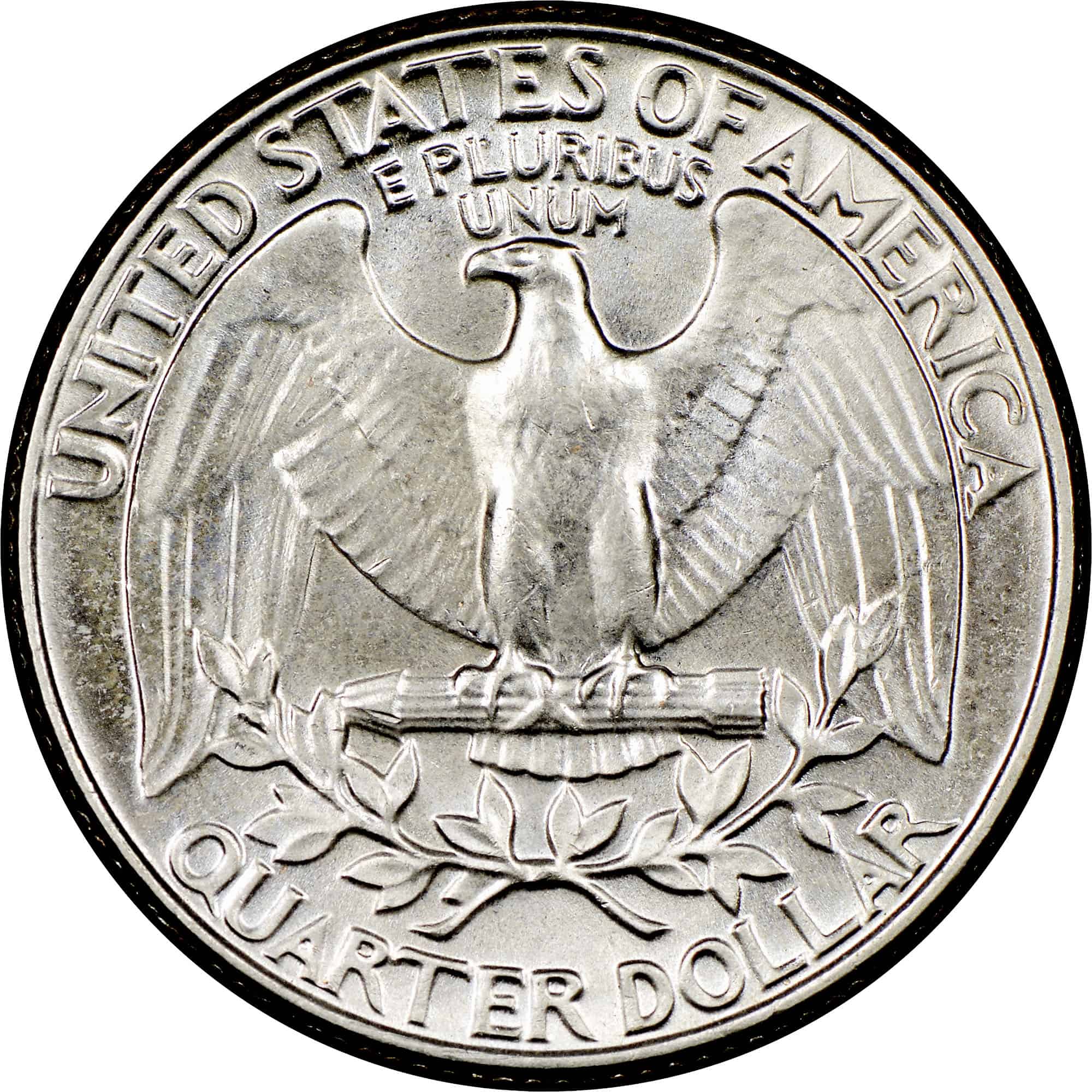 The reverse was also designed by Flanagan. It shows an eagle with outstretched wings perched on a bundle of arrows. Below it are two olive branches, symbolizing peace.

In 1932, when the Washington quarter was launched, the reverse prompted speculation as to what kind of eagle was depicted. The New York Times consulted an ornithologist for a definitive view. He concluded that it was a bald eagle, the traditional emblem of the United States.

The eagle takes up almost all the reverse. The country name is at the top of the coin, following its edge. Below it, and immediately above the eagle’s head, is the Latin motto “E pluribus unum”. This means “From the many, one” and refers to the creation of the USA from the many states.

The denomination is inscribed along the bottom edge of the coin, written as “QUARTER DOLLAR”.

Other Features of the 1983 Quarter

1983 quarters measure 24.3 millimeters in diameter and weigh 5.67 grams. They have what’s known as a “reeded edge”. Turn the coin on its side, and you’ll see a series of grooves running perpendicular to the coin face.

These aren’t just decorative. They were originally used back in the eighteenth century as an anti-fraud device. They made it obvious if the edges of coins, then made of gold and silver, had been clipped to remove precious metal.

Some of the 1983 quarters are known as “Spitting Eagle” quarters. They can be identified by a line that appears below the eagle’s beak, making it look as if it’s spitting. (For more information on the Spitting Eagle quarter, check out the section on varieties and errors.)

This YouTube video from BigDCoins looks at the 1983 quarter in more detail. 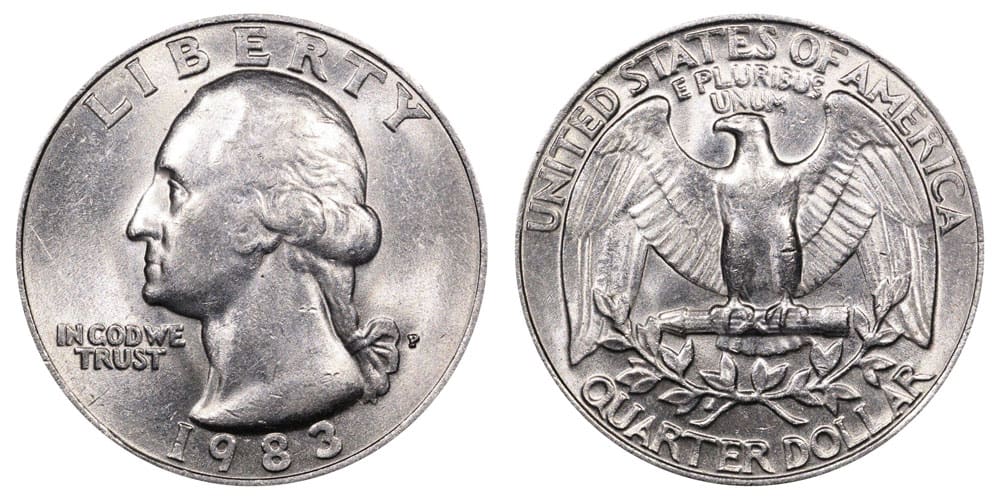 The 1983 quarter is one of the earliest coins to carry the Philadelphia mint mark. Philadelphia was the first mint facility, so originally it hadn’t needed any marks to distinguish its coins from those struck elsewhere. That eventually changed in 1982.

The following year saw over 673 million quarters struck in Philadelphia. That means that there are still a lot of them about. And unless they’re in uncirculated condition, or have an interesting error, they won’t be worth more than their face value.

The mint facility at Denver struck nearly as many 1983 quarters as the one at Philadelphia – almost 618 million of them.

For that reason, standard circulated coins will only be worth their face value. But here again, mint state coins can be considerably more valuable.

Values at lower mint state grades tend to sit slightly below their Philadelphia counterparts – $10 for an MS63 Denver quarter, and $38 for a gem quality MS65 example.

But at higher grades, they’re rarer – and hence more valuable. The finest known examples are graded MS67 and worth twice the amount of a Philadelphia quarter at the same grade. The PCGS values them at $1,250.

The relatively modest value for a best-in-class coin reflects how many of them there are. The PCGS has graded no fewer than 37 coins at MS67. 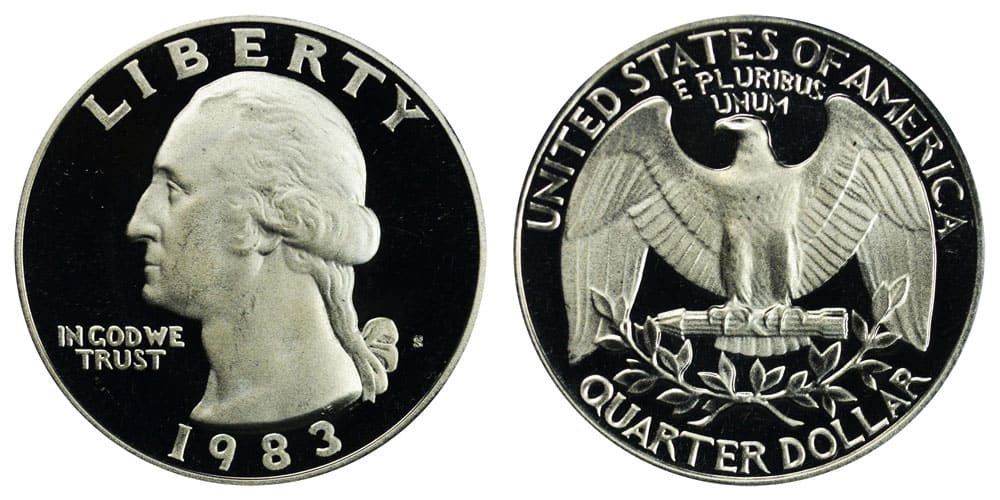 The 1983 quarters struck at San Francisco were all proof coins. These were specially struck using high quality dies on carefully selected planchets. They were never designed for circulation, instead being purchased by collectors.

Over 3 million proofs were struck in 1983, and they’re all what’s known as “deep cameos”. This is a designation given to proof coins of the highest quality. They have an attractive contrast between highly polished fields (the flat parts of the coin) and frosted designs.

These then, are beautiful coins. But they’re not as valuable as you might expect. Because they were targeted at collectors, they were carefully stored away. And with over 3 million coins produced less than 50 years ago, they’re still in plentiful supply.

The good news is that this means you can acquire a high quality coin without spending a huge amount of money. Proofs graded PR$64 to PR66 are valued at only $5. And that value increases by just a dollar at PR67. 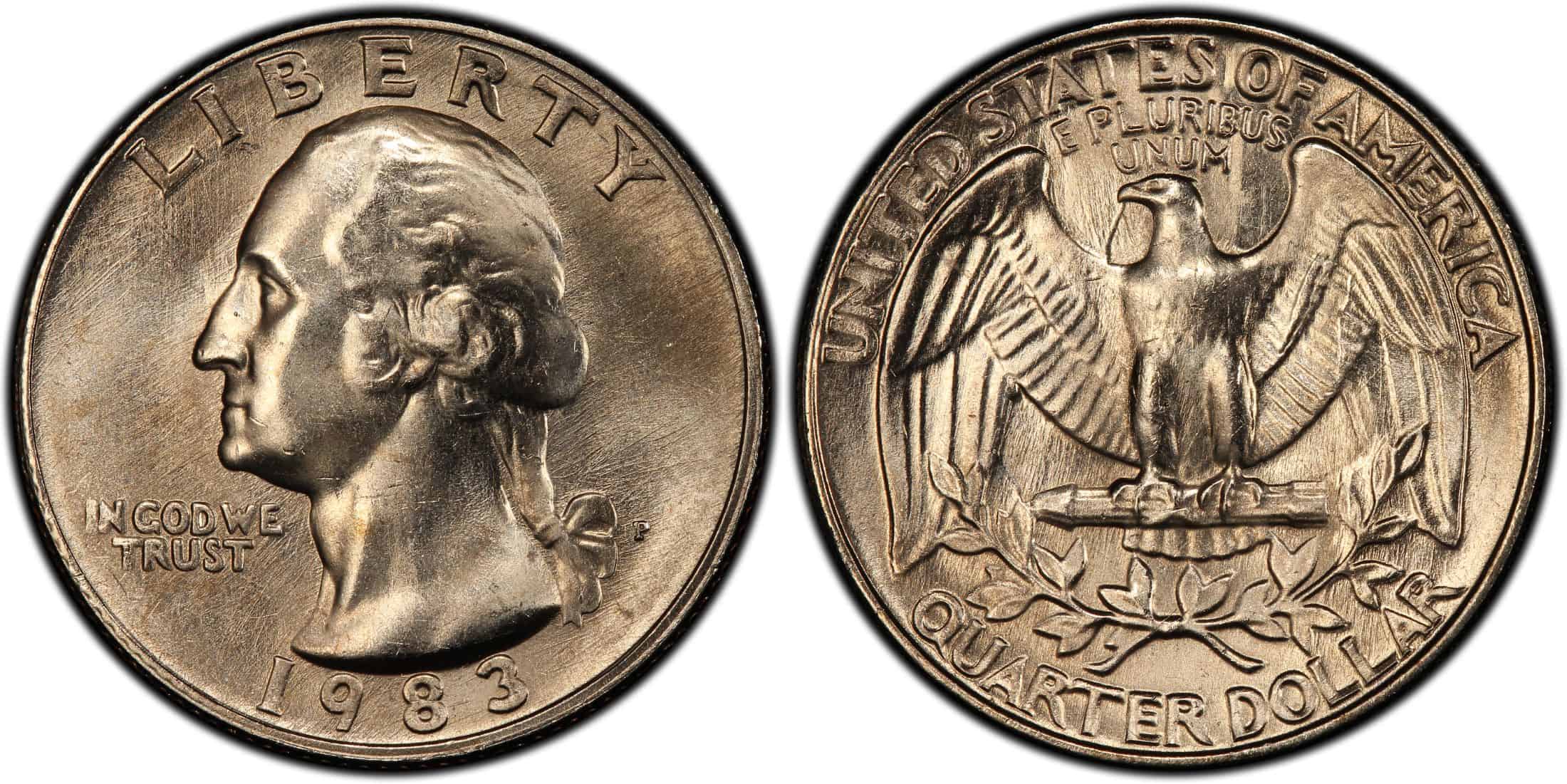 The 1983 Spitting Eagle quarter is probably one of the best known Washington quarter varieties.

It gets its name from a die clash – a mark formed when two dies clashed together without a planchet between them. That left a line on the reverse die, positioned next to the eagle’s beak.

The Spitting Eagle quarter was minted in Philadelphia. Both the major coin grading agencies, the PCGS and the NGC, recognize it as a separate variety. And these coins command considerable premiums over standard 1983 quarters.

Overstruck on an Amusement Token

The auction record for a 1983 Philadelphia quarter is held by an error coin. Instead of being struck on a blank planchet, it was somehow struck on an amusement token.

No-one knows for sure how it happened. But it’s likely to have been a deliberate act, perhaps by a mint employee or planchet supplier. The resulting coin would have been valuable, but it was highly unlikely they would ever have been able to retrieve it.

Much of the design of the amusement token can still be seen. Fortuitously, this includes the legend “This Is My Lucky Day” on the obverse, surrounded by lucky clovers. The writing slants diagonally over Washington’s face.

A few half cent coins have been found struck on TAL tokens. Aside from those, however, this is the only known coin of any denomination to have been struck on an amusement token. It sold at auction in 2014 for almost $16,000.

Sometimes the planchet is struck off-center, moving the design towards the edge of the coin. This is a rare type of mint error. Depending on the quality of the coin and how much off-center it’s been struck, it can be valuable.

One such coin, graded MS66 by the NGC, sold at auction for $50. Had it been struck further off-center, it would have been worth far more.

Another coin was struck 70 per cent off center. Only the “83” of the date was visible, together with the lower right edge of Washington’s bust and the mint mark for Philadelphia. The lack of details meant that, while it was certified authentic by the NGC, they didn’t grade it.

That coin sold at auction for over $150.

Take a look at this YouTube video from Couch Collectibles to find out more about 1983 error quarters.

With 1983 quarters, there’s no mint mark that automatically makes it rare or valuable. The vast majority of coins will only be worth their face value – 25 cents.

But if you find a coin that’s in superb condition, or has an interesting error, it will be worth more. Exactly how much depends on its grading or how interesting the error is.

One variety it’s easy to look out for is the Spitting Eagle quarter. That has a line on the reverse which runs diagonally left down from the eagle’s beak. And it’s much rarer than standard 1983 quarters.

How much is a 1983 Spitting Eagle quarter worth?

1983 Spitting Eagle quarters are a favorite with collectors. But exactly how much an individual coin is worth depends on its condition.

In circulated grades, an “extremely fine” coin is worth between $1 and $2. That’s a coin with only the slightest signs of wear to the highest parts of the design, and just a few minor scratches and marks.

If you get your hands on an uncirculated Spitting Eagle quarter, the value can be much higher. A “gem quality” MS65 coin will be worth around $85. And at MS66+, the highest known grade of this coin, the value is $500.