Production of Washington quarters as a one-year commemorative coin began in 1932, as the second such a coin in the US Mint history. Thanks to this coin, George Washington was the second American President whose profile appeared on the American coin’s obverse.

The original composition included 90% silver, but it was changed in 1965 due to increased silver prices on the stock market. However, the coin’s appearance remained unchanged until 1998. Those from the earlier period are trendy among collectors, but the 1981 quarter value and popularity are insignificant.

History of the 1981 Washington Quarter

The Washington quarter dollar is a coin created at the Treasury Department’s request to commemorate the bicentennial of the first US President’s birth. First, Congress established the Bicentennial Commission to manage the celebration organization.

According to the law at the time, the position of the Commission chairperson belonged to the US President. At the time of its establishment in 1924, Calvin Coolidge was in that position, and Herbert Hoover took over in 1929.

Due to the inactivity of the existing Commission, Congress established the new one in December 1929. The Committee members sent the first conceptual solution to President Hoover in April of the same year, but he didn’t like the idea and rejected it.

Hoover’s veto resulted from an utterly justified concern about possible coin counterfeiting. He knew numerous commemorative coin designs were minted during the 1920s, which could have created great fraud opportunities.

Unfortunately, that was not the only concern of President Hoover. One of the Great Depression consequences was a decrease in coin demand, making the mintage of some types only a few thousand.

Despite the President’s attitude, the Committee decided to announce a competition for the new coin design. The request made to the competition participants was to base the obverse design on the bust of Washington, created by Jean Antoine Houdon. The reverse design should have included a national symbol such as a shield or an eagle.

Out of almost a hundred submitted design solutions, Committee members chose Laura Gardin Fraser’s design. By the law, then-Treasury Secretary Mellon had a duty to approve the chosen solution. Unfortunately, he rejected her work and preferred John Flanagan’s design.

Even after Mellon left office in early 1932, this decision remained in force despite the pressure on the newly appointed Treasury Secretary.

However, Flanagan’s design didn’t work out well. The motto IN GOD WE TRUST was almost illegible on the quarters minted from 1932 to the beginning of 1934. Plus, the details of Washington’s hair wore out, and the coin quickly lost its beauty.

For these reasons, it was necessary to modify the dies. Despite initial issues, the US Mint still produces Washington quarters with minor changes in composition and appearance.

Features of the 1981 Washington Quarter

When you collect coins, you probably want them to be in the mint state because such pieces increase your collection value. However, it can be challenging with Washington quarters because most produced in 1981 were in circulation, and many showed significant signs of wear.

The obverse of the 1981 Washington quarter 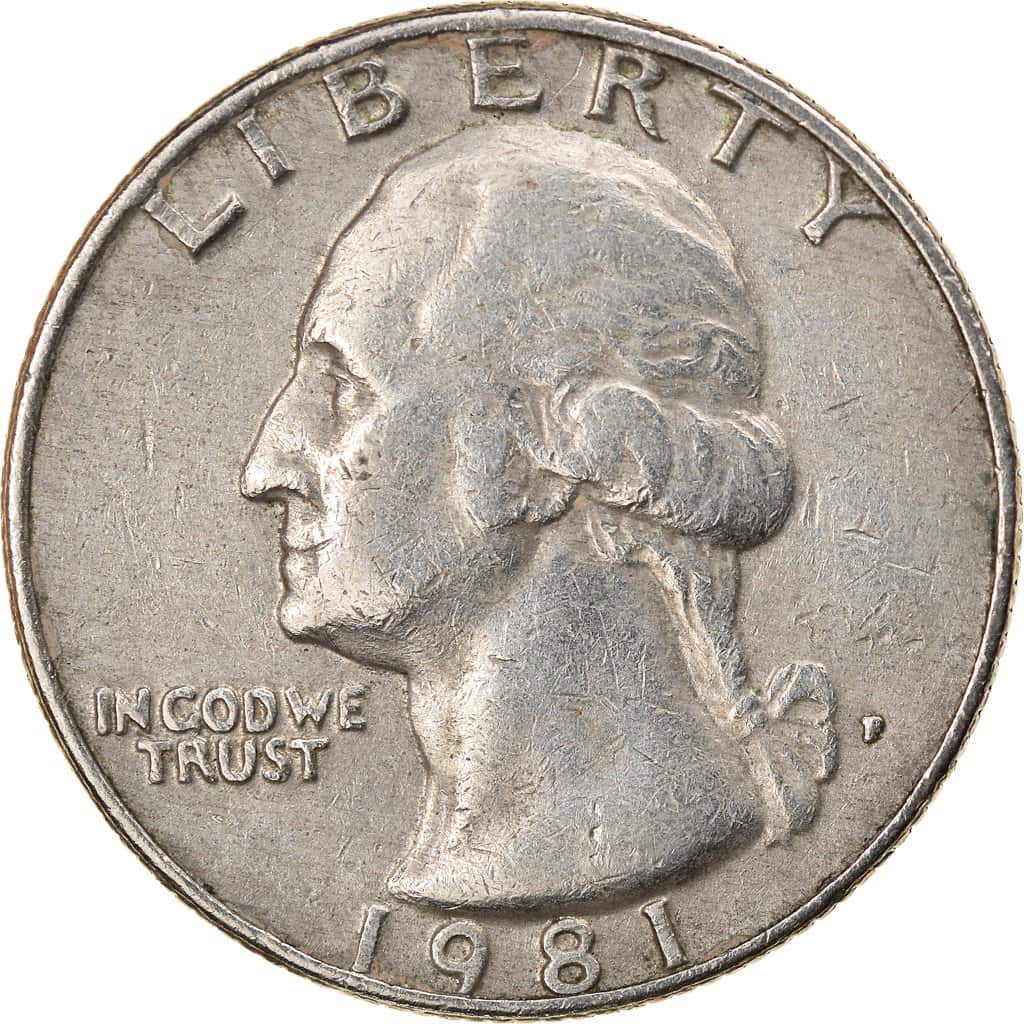 In addition, you can see there are certain inscriptions next to the former President’s profile. Above his head is the word LIBERTY, while the phrase IN GOD WE TRUST is directly in front of his face. The minting date is visible on the bottom rim.

The reverse of the 1981 Washington quarter 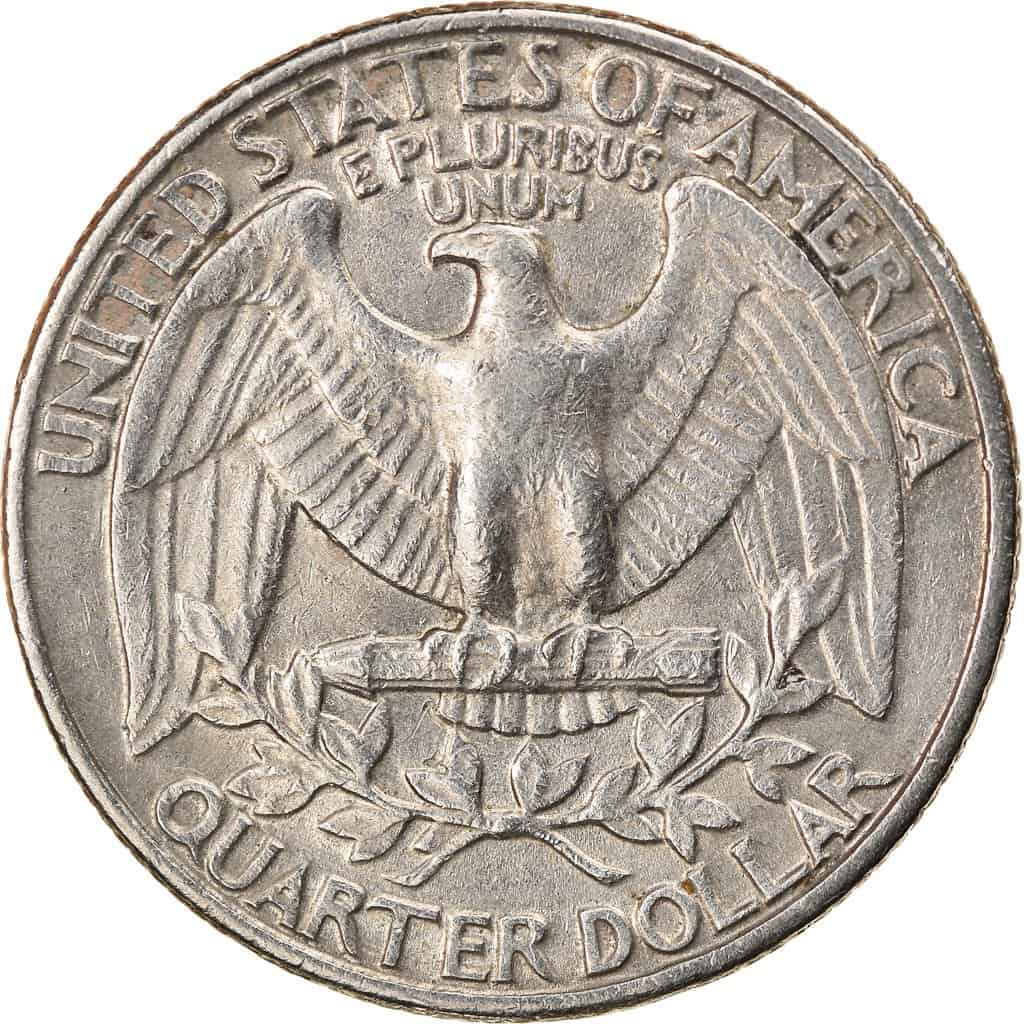 Looking at the Washington quarter reverse, you can see the dominant American bald eagle figure in the center. It is the same eagle as the one depicted on the President’s seal since it is the US national bird.

You can make out two symbols that balance the design. Below the bird with widely outstretched wings is two crossed olive branches as a peace symbol. On the other hand, an arrow bundle in the eagle’s talons is a clear war symbol.

The famous Latin saying E PLURIBUS UNUM is directly above its head, struck between the wing tips. The denomination mark QUARTER is written below the olive branches, while the name of the country stretches along the upper rim.

Other features of the 1981 Washington quarter

During the 1980s, the US Mint had a multi-million Washington quarter mintage. In 1981, three mints produced an impressive number of 1,181,501,916 coins, including those from regular strikes and proofs. 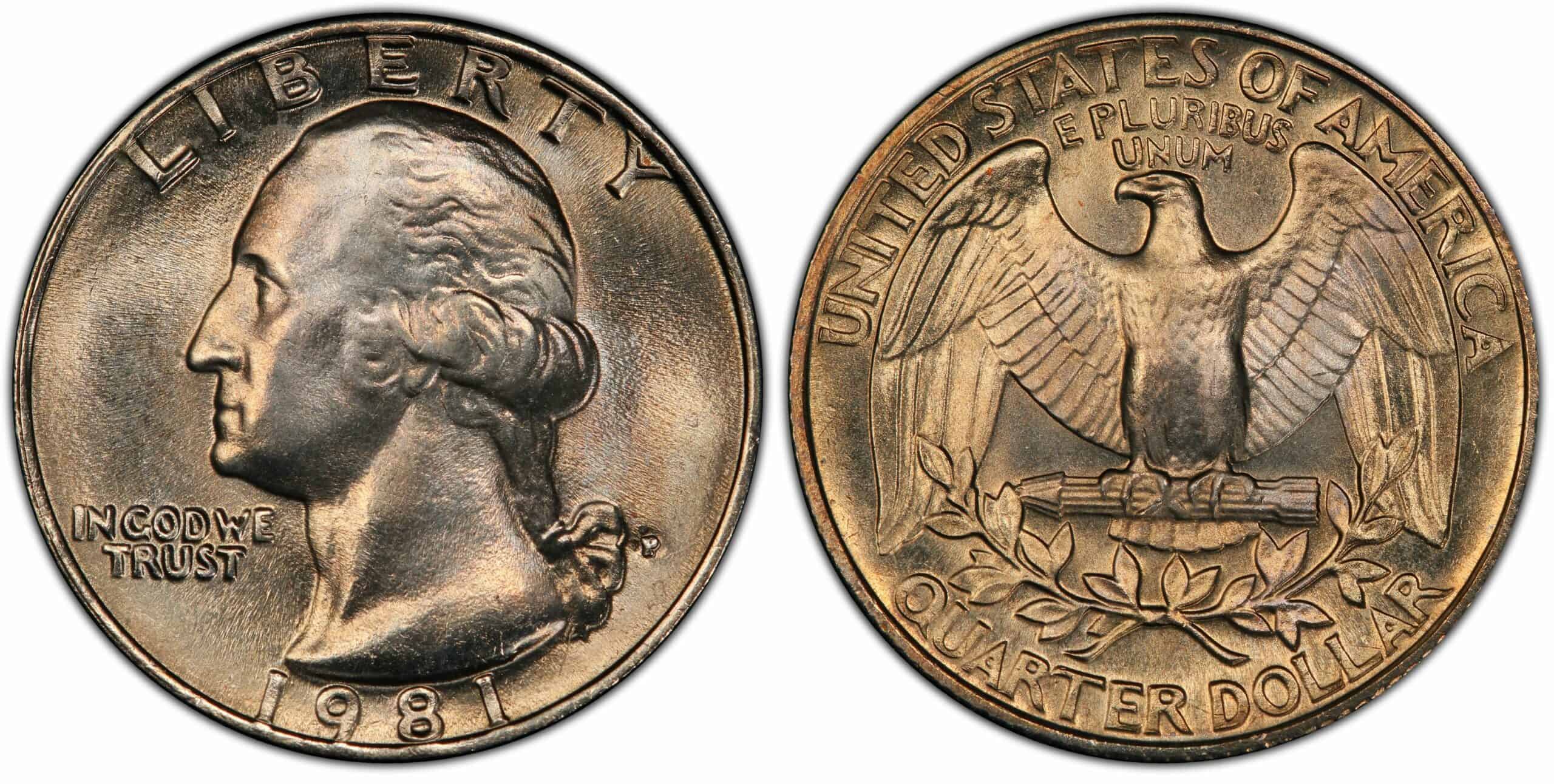 Like in many previous cases, the Philadelphia mint minted the highest number of quarters in 1981. You can find the mint mark P struck on slightly more than 600 million coins, distinguishing them from quarters from the other two mints.

These quarters are readily available on the market and are often inexpensive. You can buy a coin in average circulation condition for as little as 25 cents, while pieces in the mint state typically cost a bit more. In most cases, you should set aside about $7 for specimens with an MS 65 rating.

On the other hand, an excellently preserved quarter can reach a better price at an auction. For instance, the most expensive 1981 P Washington quarter was the one graded MS 67. This coin was paid $700 on eBay.

As many as 575,72,833 Washington quarters bear the D mint mark, which was the second-largest mintage in 1981. As always, this letter is a sure sign that the Denver mint produced your quarter.

The high mintage resulted in this coin’s high availability, and you can buy most at a very affordable price. Specimens from circulation in average condition cost only 25 cents, while the value of pieces in an MS 65 grade is slightly less than $7.

These quarters have never recorded surprising amounts at auctions. The most expensive specimen was the 1981 D MS 67 Washington quarter sold for a modest $375 in 2011. 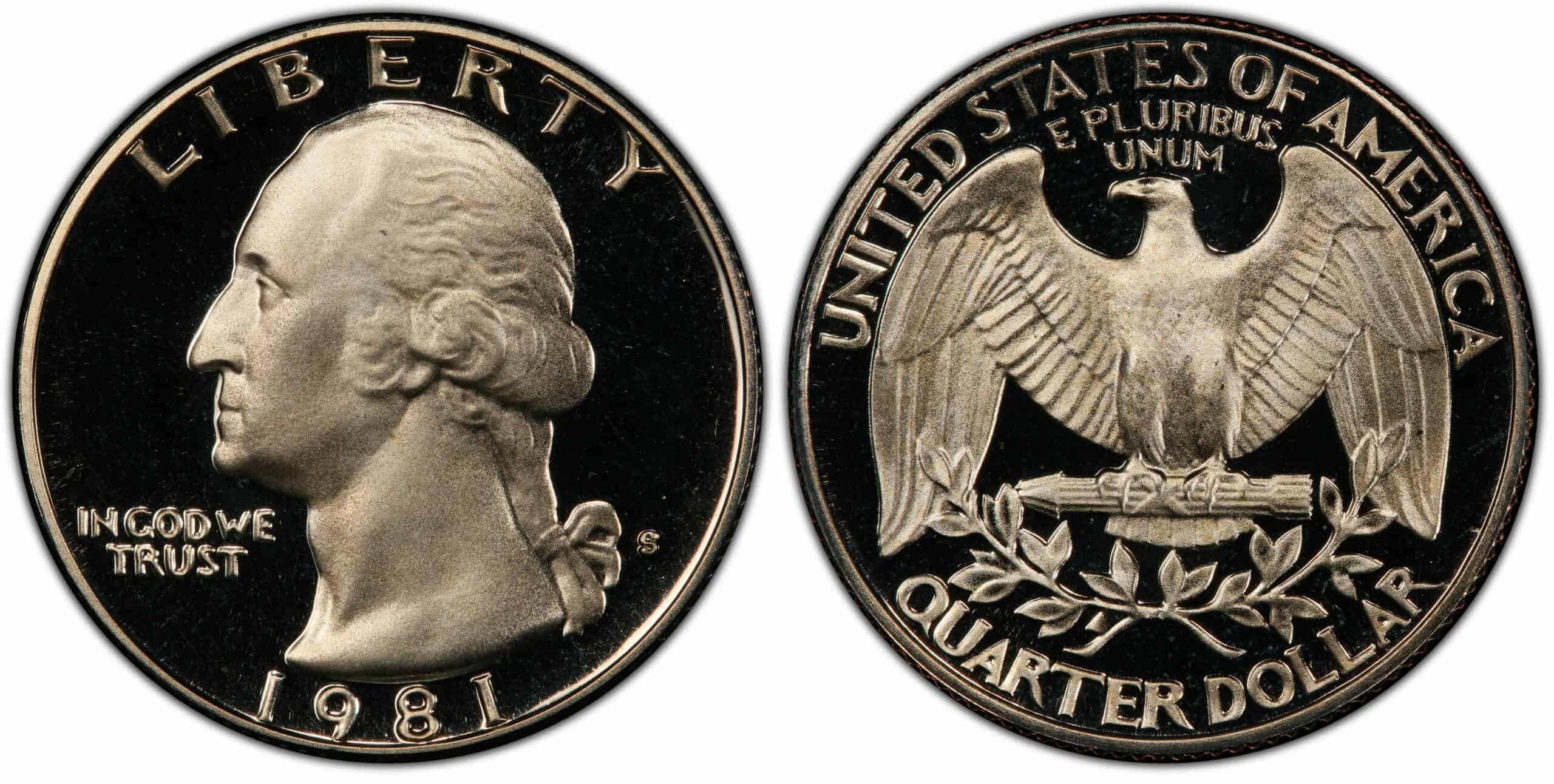 In 1981, the San Francisco mint minted only proof specimens of the Washington quarter. A mintage of 4,063,083 included two coin variants:

Despite low mintage and these two varieties, these quarters’ value is relatively low. A coin in an average condition rarely exceeds its face value. However, the price of specimens in the mint state differs depending on the type.

During minting, it is often impossible to avoid the appearance of some imperfections on the coins. Since collectors mostly look for such specimens, they are often more expensive than regular ones. Believe it or not, some quarters with an error can reach tens of thousands of dollars.

When you come across a coin with this error type, you can see a blank crescent-shaped area on its rim. It occurs when one part of the design is missing due to a wrongly placed planchet. As a result, the punch of the die is imprecise and fails to strike a coin over the entire surface.

In this case, a quarter’s value determines the distance of the design from the center. The greater this distance and the higher the percentage of the missing design, the coin is more pricey.

One of the most common minting errors occurs when the die strikes the same planchet two, three, or more times. You can spot doubling on the mint mark, letters, and numbers if you have such a quarter.

This coin type has a visible double-strike mint error. You can notice that the first die strike occurs with a partially flip-over lower rim.

The second strike comes with another planchet between this piece and the inverted die. The date and mint mark are visible from both strikes, with the second strike leaving a much sharper impression in the date area.

Several 1981 Washington quarters have an error with the filled mint marks P and D. Although they are generally considered collectible, they are not significantly valuable on the coin market.

A few 1981 Washington quarters from Philadelphia were mistakenly minted on the wrong 5-cent planchet. Some collectors will pay about $100 for such a piece.

Quarter struck on a dime planchet

You can find the Washington quarter from 1981 struck on a dime plate. The obverse design is not centered because of the difference in two coin sizes, so you can notice that the word LIBERTY and the mint mark are closer to the right edge.

FAQ about the 1981 Washington Quarter

What makes a 1981 Washington quarter rare?

A mintage of nearly 1.2 billion Washington quarters minted in 1981 ensures this coin’s availability on the coin market. For this reason, none of these coins are considered rare.

Which 1981 Washington quarter is worth a lot of money?

How much is the 1981 P Washington quarter worth?

The 1981 P Washington quarter value is low, thanks to the high mintage. The average preserved coin usually doesn’t exceed its face value, and you can buy it for about 25 cents. Even coins in the mint state typically have an affordable price of less than $7.

The Washington quarter is one of the longest-lasting coins of the US Mint. Their production began in 1932, and today you can hardly find these first examples on the coin market, particularly in the mint state. When looking for the rarest piece, it is definitely the 1932 D Washington quarter sold for $143,750.