The US mint started minting Washington quarters back in 1932. Even though the initial plan was to strike a one-year commemorative coin, the production continued. Initially, this quarter contained 90% silver, but the high price of silver on the stock market in 1965 led to a change in this composition.

Despite the compound change, the Washington quarter kept its appearance until 1998 and became one of the most famous American coins. Nowadays, collectors mainly focus on finding coins from the early 1930s and 1940s, but modern pieces are also collectible. The 1980 quarter value is modest, but novices appreciate it.

History of the 1980 Washington Quarter

The Washington quarter is one of the most popular and longest-running American coins. The minting of this initially one-year commemorative piece began in 1932 to mark the bicentennial of the President’s birth.

Since this was an important jubilee for many American citizens, preparations for its celebration began as early as 1924. Congress established the Bicentennial Commission in December of that year for that purpose.

The US President performed the duties of the Commission President. Calvin Coolidge held that position in 1924, while Herbert Hoover took it over in 1929.

Since the original Commission was not active enough, Congress formed a new group, the George Washington Bicentennial Committee, in 1930. Their first solution was a commemorative specimen that reached President Hoover in April 1930. However, Hoover vetoed it, expressing concern about possible counterfeiting.

In addition to this proposal, the committee had another one. They wanted the commemorative coin to be a half dollar instead of a quarter. That way, they would replace the existing Walking Liberty half-dollar. Even though that design caused numerous problems during minting, the change didn’t happen.

Then, the committee announced an open competition for the commemorative coins’ design. The competition condition meant that the quarter obverse should be made based on a particular Jean-Antoine Houdon’s bust of the 1st American President. On the other hand, artists had no restrictions in making the reverse.

From the 97 received applications, the winning design was a sculptor Laura Gardin Fraser’s work featuring Washington’s bust facing right. By law, the Secretary of the Treasury at that time, Andrew W. Mellon, had to approve this choice.

Unfortunately, he decided to ignore the competition and asked renowned sculptor John Flanagan to make the new coin design. President of the Commission of Fine Arts, Charles W. Moore, protested Mellon’s decision, but nothing happened.

Some officials claimed that the Secretary of the Treasury’s decision was discriminatory and that he rejected Laura Gardin Fraser’s solution only because she was a woman. However, there were no official confirmations of that.

Features of the 1980 Washington Quarter

While collecting coins for your collection, you will often come across significantly damaged specimens spending years in circulation. Since these modern quarters are abundant on the market, your goal should be to find the one in the best possible condition.

The obverse of the 1980 Washington quarter 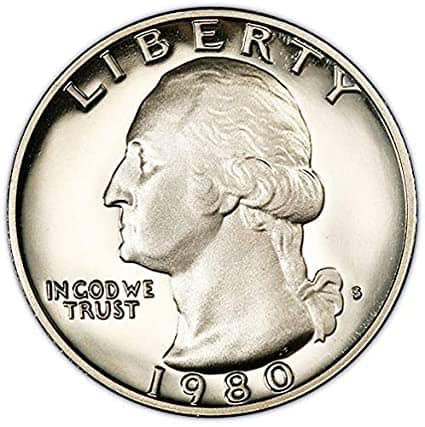 A bust of the 1st American President and one of the Founding Fathers, George Washington, occupies the quarter’s obverse center. You can see his left profile and admire his unique hairstyle tied with a bow in a ponytail.

You can see the word LIBERTY above the President’s head, while the mint mark P for Philadelphia, D for Denver, and S for San Francisco is next to the bow.

The phrase IN GOD WE TRUST is on the left coin side, directly in front of Washington’s profile. The obverse also depicts the mintage year, and you can see it on the lower rim below the central image.

The reverse of the 1980 Washington quarter 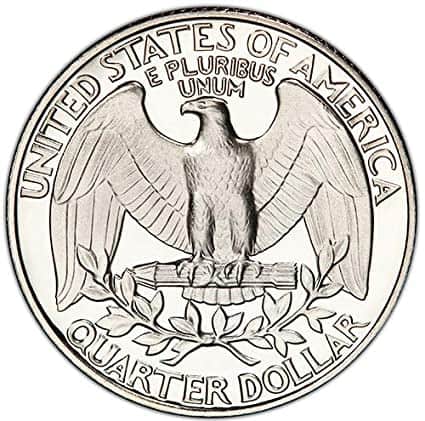 An American bald eagle with spread wings is centrally positioned on the Washington quarter reverse. This eagle, famous as the national symbol of the US, holds an arrow bundle in its claws.

Besides this symbol of war, you can see two crossed olive branches symbolizing peace under its talons. There are also a couple of inscriptions on this coin side. You can read the saying E PLURIBUS UNUM placed between the eagle’s spread wings, just above its head.

Above the entire composition is the country name stretched along the upper rim. Finally, the denomination QUARTER is struck below olive branches.

Other features of the 1980 Washington quarter

The US Mint released many Washington quarters into circulation in 1980. Three mints produced 1,157,714,293 coins with different mint marks, depending on their location.

The Philadelphia mint minted the most Washington quarters in 1980. Precisely 635,832,000 specimens came into circulation with the letter P on the obverse, representing the mint mark. It was the first series produced in Philadelphia with the struck mint mark in history.

Due to this coin’s large circulation, its value in the current coin market is not too high. For a circulated specimen in average condition, you only need to set aside 25 cents, which is its nominal value. Although a piece in the mint state is worth a bit more, the sum of about $7 is still quite affordable.

On the other hand, individual specimens can reach even higher prices at auctions. For instance, one collector bought the 1980 P MS 67+ Washington quarter for $900 in 2019. 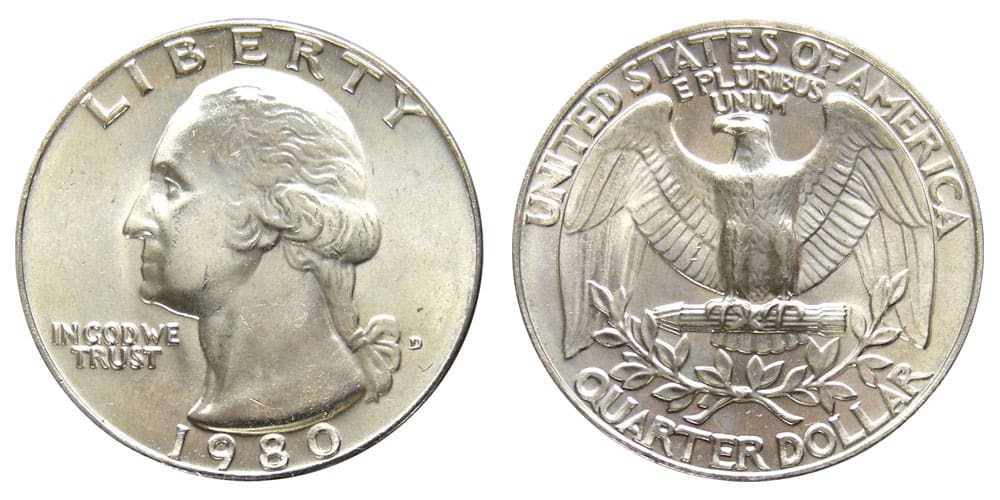 With a little less than 520 million pieces, the Denver mint had the second-highest Washington quarter’s mintage that year. You can quickly recognize these specimens by the letter D struck on the obverse, right of the bow in Washington’s hair.

Such a high mintage affects these coins’ value, making them pretty insignificant. For instance, most quarters in the average condition that have spent years in circulation are worth only 25 cents. Even a piece in the mint state doesn’t cost too much, and you can find the beautiful coin for less than $7.

On the other hand, selling these pieces at an auction can be surprising and bring more than a decent profit. Thus, one lovely 1980 D Washington quarter reached $1,380 in 2007. 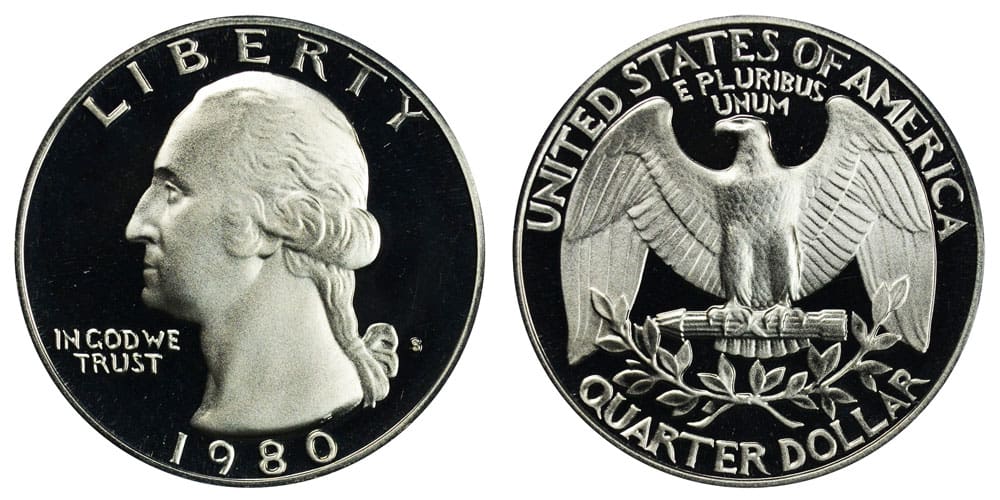 In 1980, the San Francisco mint produced only proof Washington quarters, and the circulation of slightly more than 3,5 million ensured this coin’s easy availability on the market. You can distinguish these pieces from other quarters by the S mint mark struck on the obverse.

Even though they are proof specimens, their value is relatively low. In most cases, you should spend less than 70 cents for a coin in the average condition. Interestingly, even a quarter in the mint state is not a demanding investment, and you can find one beautiful piece for about 4.5 dollars.

On the other hand, some proof quarters can reach higher sums, depending on their grade and luster. One collector sold the 1980 S PR 70 Washington quarter with deep cameo contrast for $253 at an auction in 2004.

Numerous mistakes can occur during coin production because none minting process is perfect. Even though errors are less common in modern coinage, you can find a few imperfect pieces among the 1980 Washington quarters. Such specimens are always more valuable than those from the regular strike.

When you look at a coin with this error type, you can notice that part of the design is missing from the surface. At the same time, there is an empty crescent-shaped area on the opposite side.

The error occurs when the die strikes the coin imprecisely due to an incorrectly placed planchet. The distance of the design from the center determines the coin value. In other words, the smaller the design percentage is visible, the higher the quarter value.

Quarter struck on a damaged planchet

Sometimes, you can come across a Washington quarter mistakenly struck on the wrong plate. For instance, you can find the 1980 Washington quarters produced in the Philadelphia mint that were struck on a 5-cent planchet. Since these specimens are rare, their value is typically a few hundred dollars.

Missing clad layer on the obverse

Sometimes you can come across a quarter whose copper core is wholly or partially visible on one coin side. Partial errors where about 50% of the outer layer is missing are more challenging to find than those without the clad layer on the entire surface.

Interestingly, collectors are more interested in specimens that don’t have a clad layer on the entire surface, regardless of whether it is the reverse or obverse. However, both variants are collectible and cost approximately $75 to $200.

1980 was the first year the Philadelphia mint began minting coins with the P mint mark. Several Washington quarters produced that year have an error with a filled-in P, and some collectors consider them collectible.

Due to their millions of mintage, Washington quarters are one of the most affordable pieces on the coin market nowadays. Since most modern quarters, including those minted in 1980, are in circulation, their value doesn’t exceed their face value.

Even pieces in the mint state are pretty affordable, but the final price always depends on the minting date, mint mark, and coin condition. Like other modern coins, Washington quarters produced in 1980 are inexpensive, but you can expect their value to increase over the years.

FAQ about the 1980 Washington Quarter

What makes a 1980 Washington quarter unique?

The Washington quarters minted in the Philadelphia mint in 1980 are unique as the first pieces in the set with the P mint mark struck on the obverse.

Which 1980 Washington quarter is worth a lot of money?

How much is the 1980 P Washington quarter worth?

Most modern Washington quarters, including those from 1980, come with a high mintage, affecting their value. Therefore, you can buy a coin in average condition for as little as 25 cents. Specimens in the mint state cost more, and you can get one for nearly $7.

What is the most expensive Washington quarter?

The US Mint started producing the Washington quarter in 1932. Since most of these coins were in circulation, finding those in the mint state can take time and effort.

Therefore, you shouldn’t be surprised that the 1932 D Washington quarter is considered the rarest and most pricey coin in the set. One rare specimen in perfect condition was sold for $143,750 in 2008.