Kennedy half dollars replaced the Franklin halves in 1964, shortly after John F. Kennedy was assassinated in Texas. The new Gilroy Roberts coin design honored the beloved 35th American President and provided an opportunity for Americans to preserve the memory of this sad event for only fifty cents.

Unlike the first pieces made of silver, copper content makes the 1979 half dollar value pretty modest. Even though the US Mint regularly struck these halves from 1964 to 2002, it was challenging to find them in circulation by the early 1980s. Let’s meet this lovely and historically significant coin.

History of the 1979 Kennedy Half-dollar

The first US silver Flowing Hair half dollars appeared in circulation in 1794 and 1795. Then, Draped Bust replaced this design in the following decade. In 1807, the US Mint started producing Capped Bust until 1839, when Seated Liberty came instead of it.

In 1892, the Barber half-dollar appeared on a scene and lasted until 1916. Americans got a new coin design that year, and Walking Liberty stayed in circulation until 1947 as the last American coinage showing Lady Liberty.

After the Lincoln penny broke the long-standing tradition of minting fictional characters on the coin obverse, the US Mint introduced the Franklin half-dollar in 1948. Its mintage unplanned interrupted after President Kennedy’s assassination in 1963.

That year, the 50-cent coin with a Kennedy image on the obverse was created in a hurry. The first pieces were released into circulation only a few months after the unfortunate event.

The Mint director, Eva Adams, was fast and talked with the chief engraver about creating new coins within a few hours of Kennedy’s assassination. The primary question was which denomination to choose from.

They hesitated between the silver dollar, half-dollar, and quarter and left Jacqueline Kennedy to decide. Since she wanted to avoid replacing President Washington’s profile, the final choice was to replace Benjamin Franklin. Therefore, the decision was to create a new half-dollar with John Fitzgerald Kennedy on the obverse.

Congress accepted the new design solution only a month after Kennedy’s death, and the coin was authorized on 30th December 1963. The minting promptly started in Philadelphia and Denver mints on 11th February 1964.

Unfortunately, Americans refused to use new silver coins as a means of payment and started hoarding them, probably for three reasons. These specimens were inexpensive souvenirs reminding them of a beloved and unfortunately died President.

On the other hand, silver coins were a safe investment in those turbulent times. Last but not least, most people predicted that these historically significant coins were potentially collectible items and wanted to save them for the future and wait for their value to increase.

Due to all these reasons, halves appearing the following year came with reduced silver content. The US Mint produced clad-silver coins with only 40% silver from 1965 to 1970, but even that was not a sustainable solution.

Therefore, the current Kennedy half dollars contain copper and nickel. Their core is made of pure copper, but the outer layer is an alloy with added 25% nickel. However, you can find a few exceptions to the rule, including:

Even though the US Mint has produced these coins primarily for annual sets since 2002, the Federal Reserve has a right to order them for circulation when necessary.

Features of the 1979 Kennedy Half-dollar

The 1979 Kennedy half-dollar is an elegant coin, like all others from the series. Thanks to a late mintage year, it is not particularly valuable, but you can quickly find highly preserved specimens. Most collectors are happy to buy this lovely coin and complete their collections. 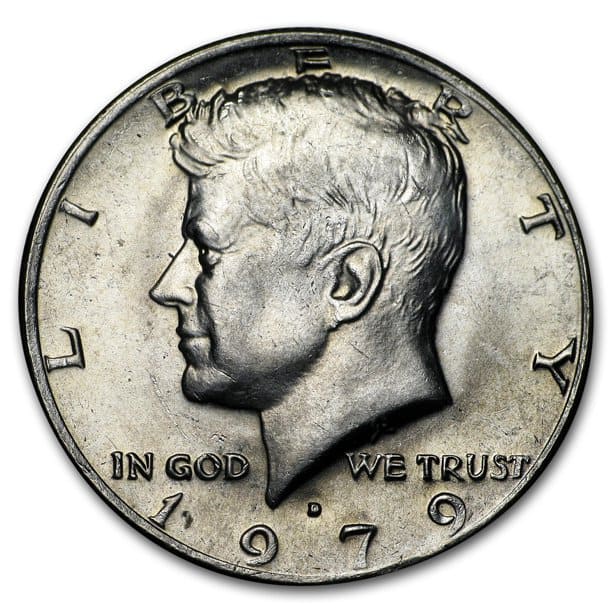 The 1979 Kennedy half-dollar obverse shows a left-facing portrait of John F. Kennedy, the 35th President of the US. Chief engraver Gilroy Roberts based it on his previous work, the Kennedy Inaugural Medal.

Along the coin rim, you can see struck LIBERTY and the DATE, while the divided IN GOD WE TRUST motto is just below the image. You can determine the mint where this particular coin was produced based on the mint mark placed above the minting year. 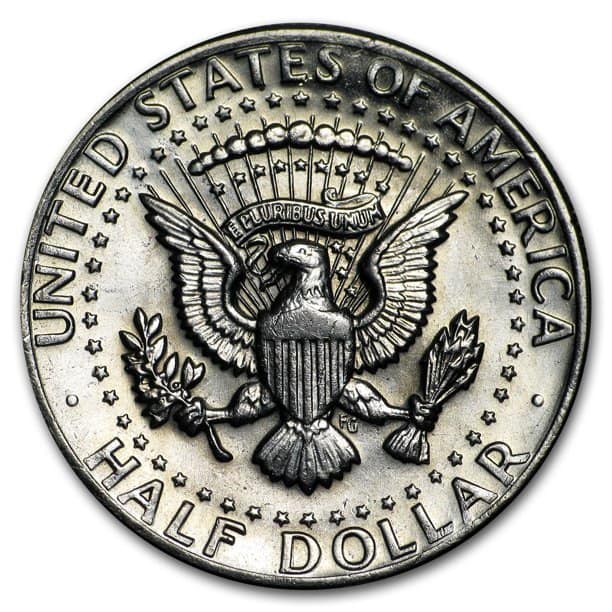 Engraver Frank Gasparro created a beautiful but a bit cluttered reverse design of the 1979 Kennedy half-dollar. You can see the presidential coat of arms with an eagle in the central position.

The eagle has outspread wings and holds 13 arrows in its left claw, symbolizing the first states. In another talon is an olive branch as a symbol of peace. The entire composition is surrounded by 50 stars dedicated to current American states.

The eagle, the national bird of the United States, wears a shield in front of its chest. Besides this image, there are also three inscriptions, including:

Other features of the 1979 Kennedy half-dollar

Each clad piece has a center of pure copper and an outer layer combining copper and nickel. In other words, these coins contain a high percentage of copper, with only 8.33% nickel. Its thickness is 2.15 mm (0.085 inches).

Value Guides of the 1979 Kennedy Half-dollar

While two mints produced Kennedy half dollars from regular strikes in 1979, the one in San Francisco minted only proof coins. The entire mintage this year was 87,804,597 pieces, including those without the mint mark or two different letters struck on the obverse.

Unlike the first coins and those released as sets for collectors during the last two decades, halves minted this particular year came with a clad composition. Therefore, they have only collectible value, and pieces in poor condition are neither attractive to collectors nor investors.

However, copper is valuable metal on the stock market these days, so these specimens’ value increasingly depends on its price. Sometimes, people consider old copper-clad coins, including the 1979 Kennedy half dollars, a new kind of investment and collect them only because of copper content. 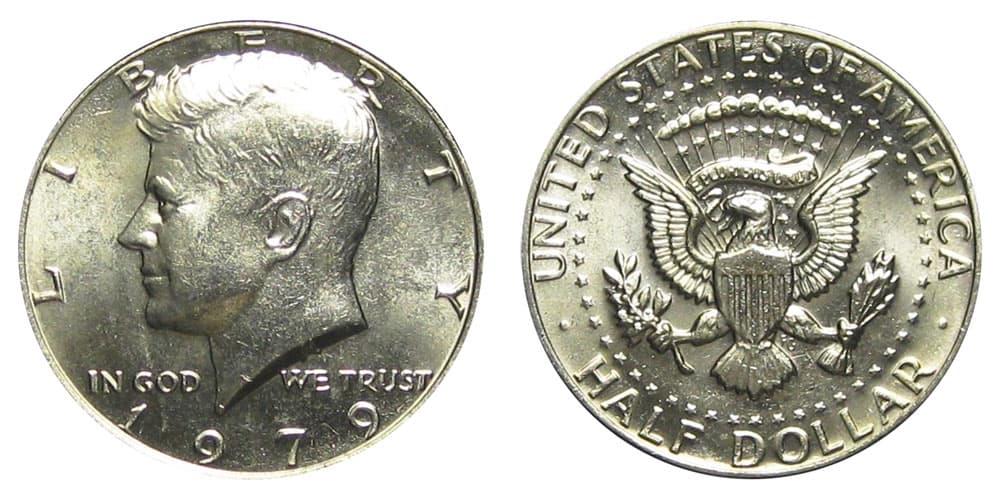 Most of the 68,312,000 No Mint mark halves struck in the Philadelphia mint are abundant on the coin market and affordable. That makes these pieces attractive for new collectors and those with limited budgets.

Well-preserved half dollars from this mint are typically worth $0.75 to $23, depending on quality, and only excellent pieces cost $275. However, you can always find a few exceptions, like a costly specimen sold at Heritage Auctions in 2013. This exciting coin became a part of a private collection for $4,113. 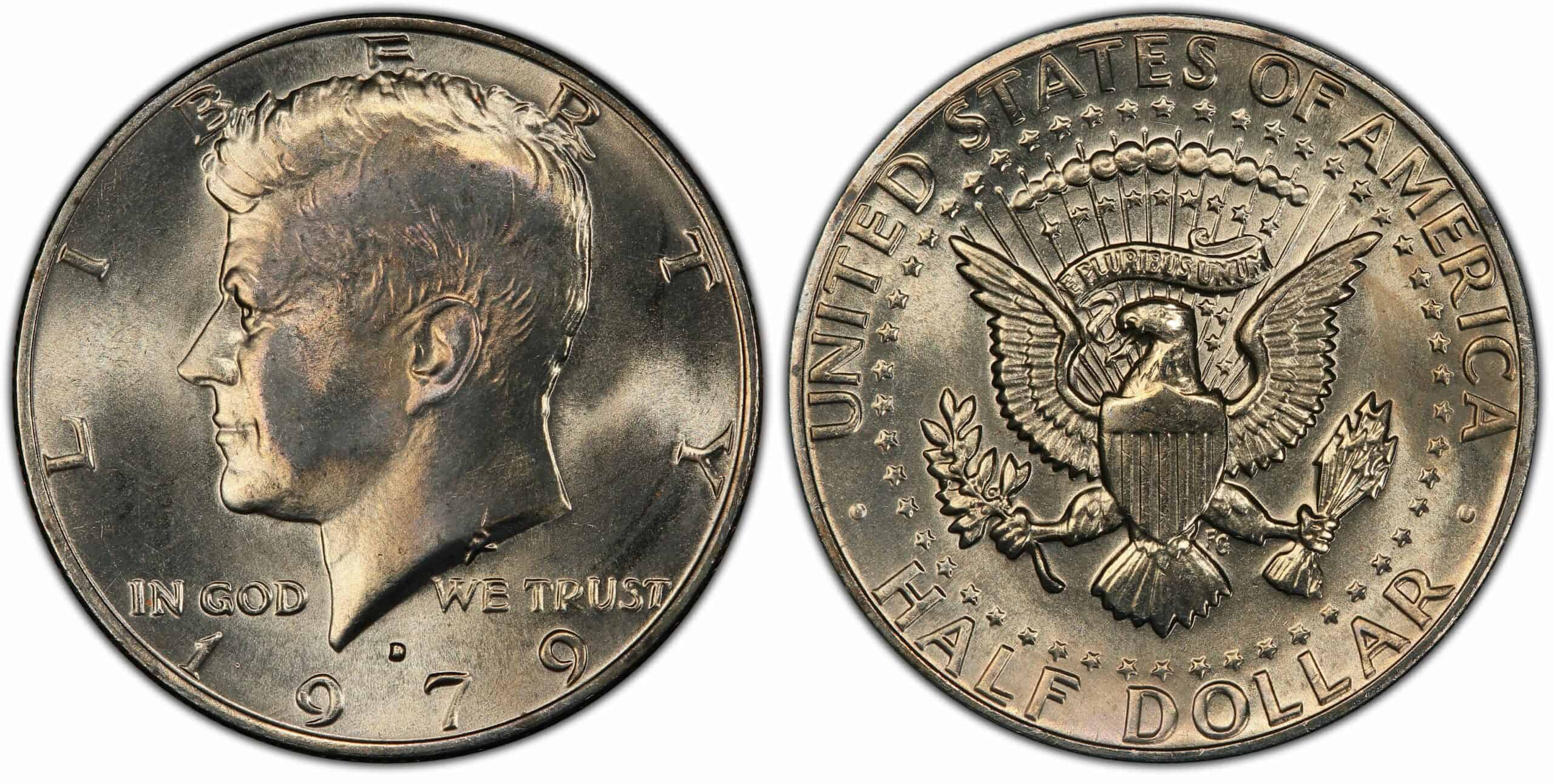 However, you can also find super-quality specimens on the market. For instance, one collector paid $2,703 for one of these beautiful coins in 2017. 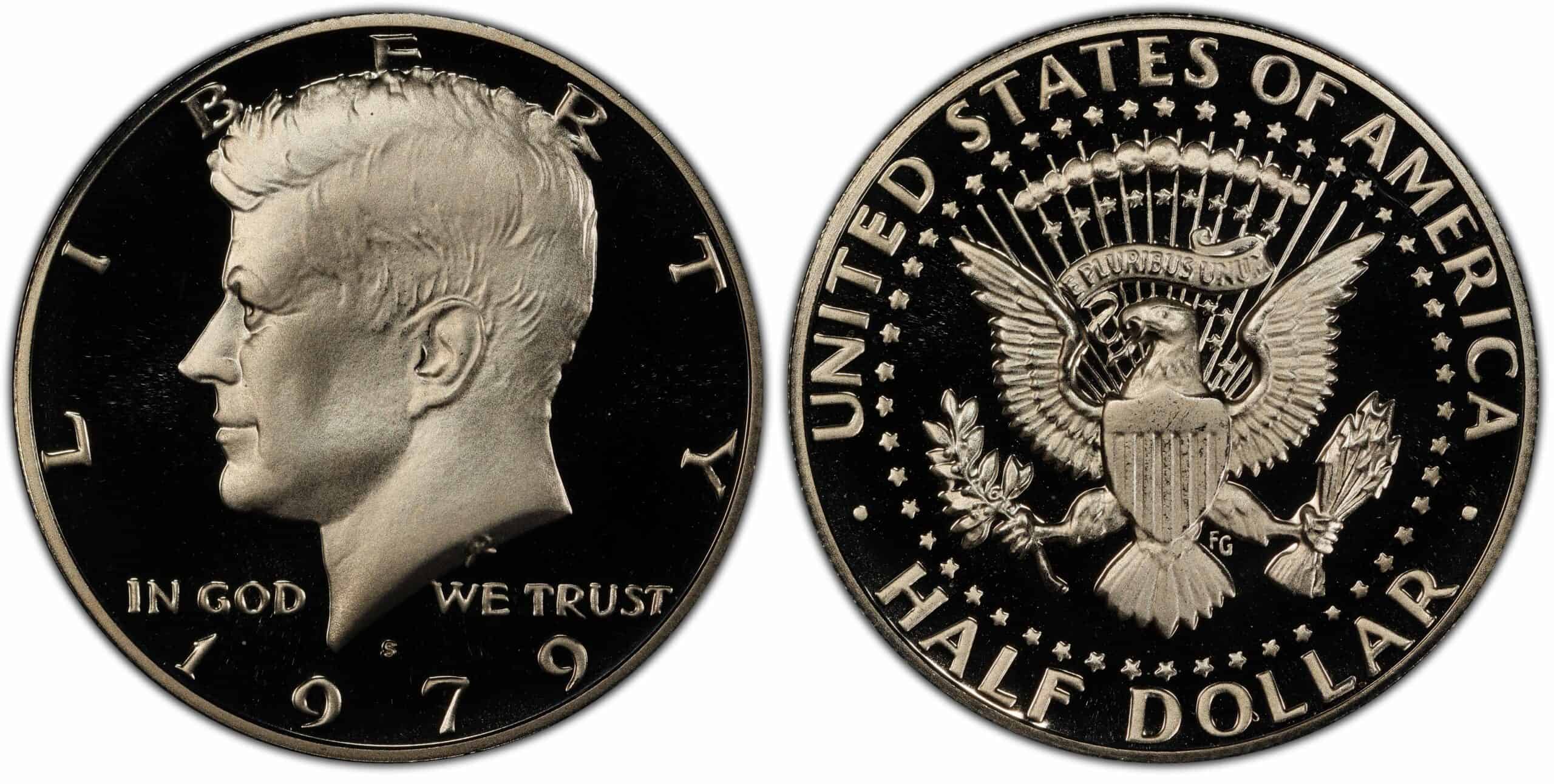 In 1979, the San Francisco mint struck two different coin types. All 3,677,175 pieces were proofs, without halves from the regular strikes. You can recognize the following:

The Type 1 coins are more affordable and typically come with a price range of $3 to $35, depending on the preservation level. On the other hand, you should set aside $9.50 to $130 for specimens with the clean-cut mint mark.

The most expensive coin struck this year in San Francisco was paid $3,738. One collector bought the 1979 S Kennedy half-dollar Type 2 in perfect condition and with deep cameo contrast at Heritage Auctions in 2007.

Errors are not particularly common among Kennedy half-dollars struck in 1979, making it bad news for collectors. Believe it or not, some of these dedicated coin admirers prefer collecting only or mostly imperfect coins.

A rare error you can find in coins minted this year is the one accidentally struck on the so-called Anthony planchet. This planchet type was slightly tinier than the corresponding die, resulting in halves with missing elements.

Besides this well-known error, you can also find 1979 half-dollar coins with broad strikes, off-center strikes, missing clad layers, and strike-through.

FAQ about the 1979 Kennedy half-dollar

What makes 1979 Kennedy half dollars rare?

As expected, the 1979 Kennedy half dollars are too modern to be too expensive. Only pieces from San Francisco can cost more, while specimens struck on the Anthony planchet are considered relatively rare.

Which 1979 Kennedy half-dollar is worth a lot of money?

How much do No Mint mark 1979 Kennedy half dollars cost?

Most 1979 Kennedy half dollars are inexpensive coins, and their price is $0.75 to $23, depending on their quality. If you prefer specimens in ultimate condition, you should pay $275 for one with an MS 67 rating.

What are the most valuable Kennedy half-dollar coins?

Undoubtedly the most costly Kennedy half-dollar is the one from Denver produced in 1964. It won an auction record in 2016 when it sold for an impressive $22,325 at LRC Auctions. However, the list of pricey halves also includes coins bought at other auctions, like: