Rob Paulsen » 1978 Silver Dollar Value Guides: How Much is it Worth Today?

There’s something wonderful about the classic silver dollar. Its size, weight and luster set it apart from modern versions. The last one was minted in 1978, marking a moment in US numismatic history.

So what does that mean for the 1978 silver dollar value? We’re going to look at that question. And we’ll also cover the history and features of this fascinating coin.

History of the 1978 Silver Dollar

Classic large, silver dollars had gone out of favor for some years before the arrival of the Eisenhower dollar. No other coin in this format had been minted since the last “Peace Dollar” in 1935. But by 1971, two factors combined to change that.

One was that the US gaming industry needed new silver dollars for use in slot machines up and down the country. With no new large-scale dollars having been produced for over 30 years, the issue was becoming ever more pressing.

Then, in March 1969, former president Dwight D. Eisenhower died. There were calls to honor him on the nation’s coinage. After a couple of years of wrangling over what the coins would be made from, the first Eisenhower dollars were minted in 1971.

The rise in silver prices since 1965 meant that a silver coin was too expensive to produce. So the new dollars were made with a copper core and clad in a mixture of nickel and copper. For the collecting market, some coins were also produced with a silver cladding, making them 40 percent silver.

The first proof coins were presented in a plastic holder inside a brown wooden box. The first mint state silver coins were enclosed in film and a blue envelope. That gave rise to the nicknames “brown Ikes” and “blue Ikes”, by which the coins are still known today.

The new coins were large and heavy, which meant that they weren’t popular for everyday use. Their main advantage was in gaming, where they were often used in place of casino tokens. One coin expert estimated that 70 percent of circulating Eisenhower dollars were being used in casinos.

By 1978, the writing was on the wall for the Eisenhower dollar. Money was being spent minting coins which did not circulate. The appetite for collecting had diminished too. No 40 percent silver dollars were minted after 1974.

It was replaced by a smaller dollar, bearing the image of women’s rights campaigner Susan B. Anthony, in 1979.

Features of the 1978 Silver Dollar

The Obverse of the 1978 Silver Dollar 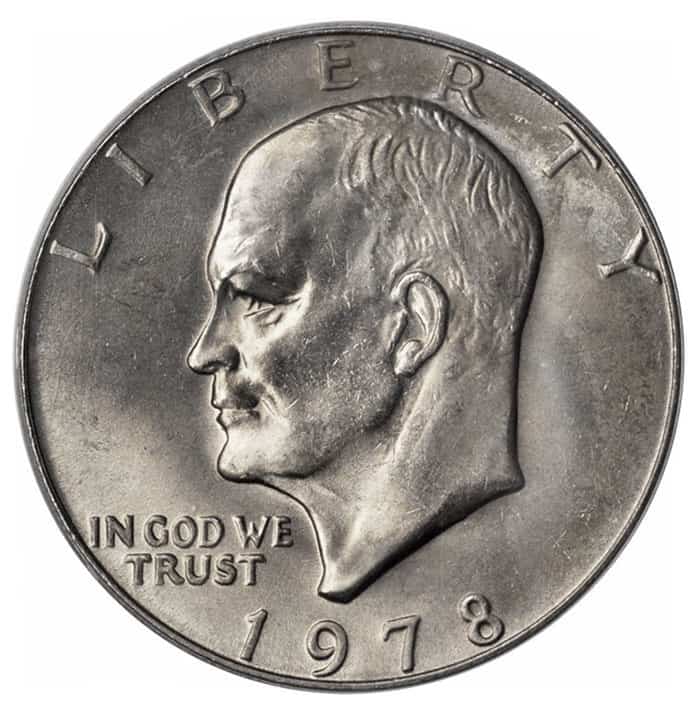 The obverse of the Eisenhower dollars, including the 1978 silver dollar, carries the portrait of Dwight D. Eisenhower. It was based on a sketch completed over 20 years earlier by the Mint’s chief engraver, Frank Gasparro.

In 1945, Gasparro had attended a rally to celebrate the Allied troops’ victory in the Second World War. There, he had caught a glimpse of Eisenhower, and had sketched a portrait on the spot.

Also on the obverse of the coin is the motto “In God We Trust”. This appears to the left of Eisenhower’s portrait, just below his chin. The word “Liberty” is wrapped around the coin’s top edge, while the year of minting is at the bottom.

For coins struck in Philadelphia, there’s no mint mark. But for those minted in San Francisco or Denver, a small “S” or “D” respectively appears just above the third digit in the date.

The Reverse of the 1978 Silver Dollar 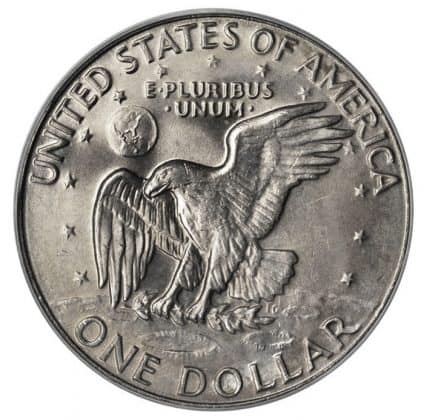 Frank Gasparro had just six weeks to design the Eisenhower dollar. He prepared two different designs for the reverse, both of which involved an eagle. The tight timescale meant he was grateful for the time he’d previously spent researching the birds.

One design featured a formal eagle of the type used in heraldry. The other was based on the patch created to commemorate the landing of Apollo 11. It was this latter design that was approved for use.

It shows an eagle descending to the moon, one wing raised, and an olive branch clutched in its talons. The Earth can be seen in the distance, above the eagle’s head.

The design is ringed in stars. Wrapped around the top of the coin are the words “United States of America” with the motto “E pluribus unum” below. It’s Latin for “from the many, one”, referring to the multiple states forming one country.

At the bottom of the coin is the denomination “One dollar”.

Other Features of the 1978 Silver Dollar

The Eisenhower dollar was crafted with a copper core. The majority of coins were clad in copper and nickel, while a smaller number were clad in silver. The silver version was made as a collector’s piece, but none of these coins were minted in 1978.

The edges of all the coins have a reeded finish – a series of parallel grooves that run perpendicular to the surfaces.

The Eisenhower dollar is the only large-format dollar ever minted in copper and nickel. And the 1978 silver dollar is notable as the last dollar coin minted in the original, larger size.

You can find out more about the different compositions of the Eisenhower dollar in this YouTube video. 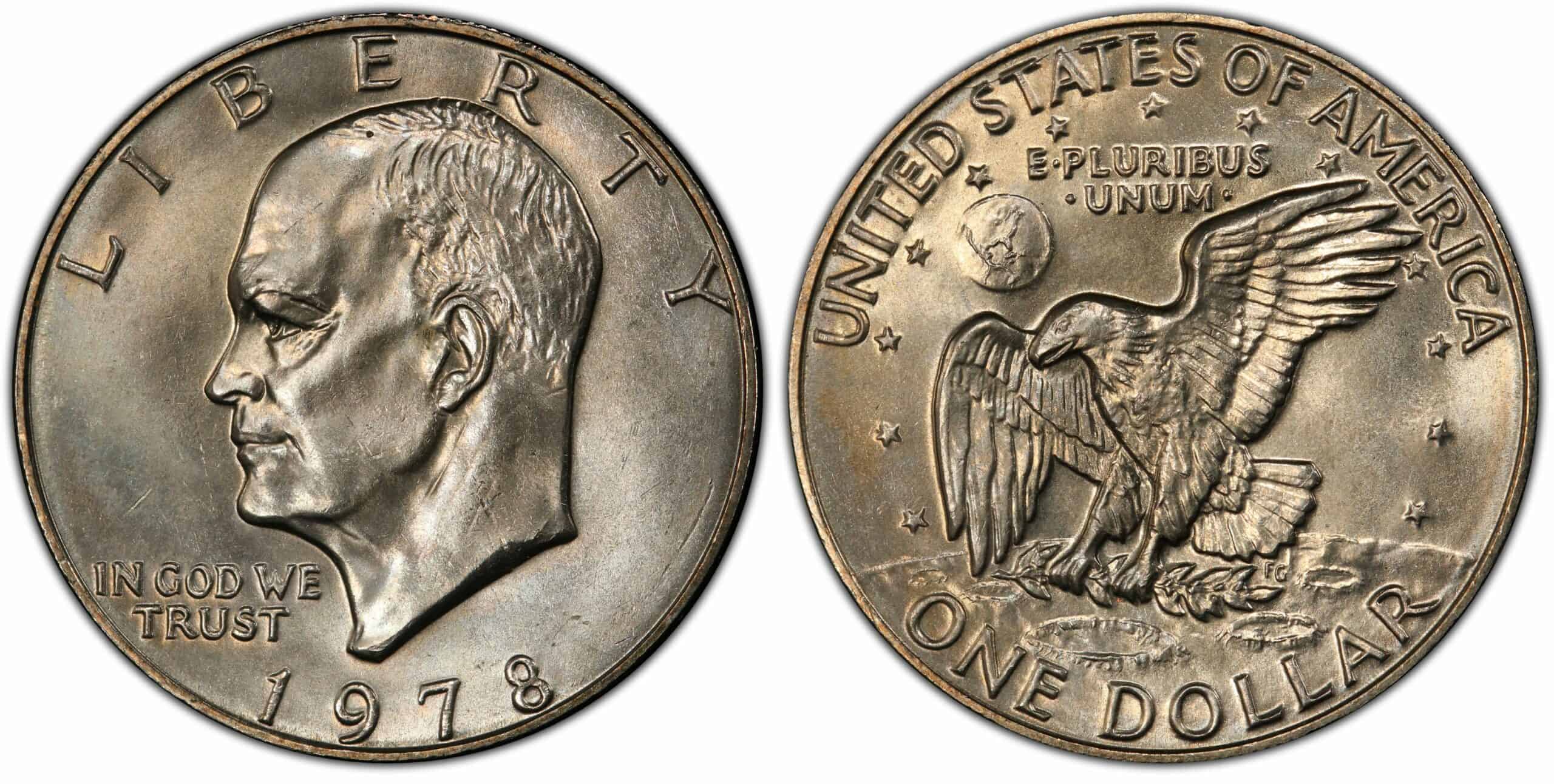 Although 1978 was to be the final year Eisenhower dollars were minted, they were still made in large numbers. The Philadelphia mint struck nearly 26 million coins for circulation, while the Denver mint struck over 33 million.

That means that today, circulated examples aren’t rare and generally aren’t valuable. Depending on its condition, a 1978 silver dollar can be picked up for anything from its face value to $2.

When it comes to uncirculated coins, their value is largely dependent on their quality. And there can be a major difference in the value of coins even one grade point apart.

The Eisenhower dollars that are generally most difficult to find in excellent condition are those struck in 1971 and 1972. The strikes in those years were relatively poor, and most coins destined for circulation were nicked or scratched when they were transported from the mint.

In addition, no mint sets were produced in those years, so getting hold of the coins was more challenging for collectors.

The PCGS, an independent coin grading service, has graded around 500 coins minted in Philadelphia at MS66. The number is similar for those minted in Denver.

But at MS67, the numbers are only seven coins from Philadelphia and four from Denver. And at present, no coin of finer quality is known to exist.

Proof coins were struck for collectors, so they are of the highest quality. They use special dies and specially selected and polished planchets. But that doesn’t necessarily mean they’re always the most valuable coins.

All the proof coins of the Eisenhower dollar were minted in San Francisco, and they were produced in large numbers. In 1978 alone, the mint churned out well over 3 million proofs. And because they were sold to collectors, most were stored carefully and kept in great condition.

If you’re looking for a fine quality specimen of a 1978 silver dollar without spending a fortune, then proofs are the way to go. You can pick up a proof graded 69 out of 70, with a “deep cameo” designation, for just $30 or so. 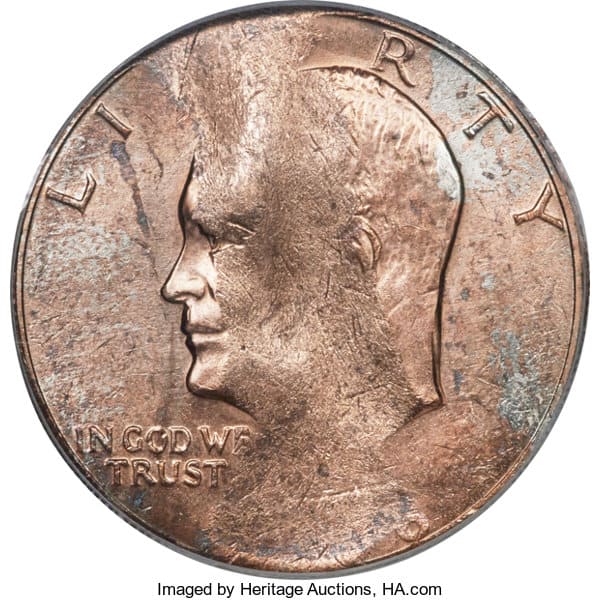 Very occasionally a planchet – the metal disc on which the coin is struck – is defective. That can lead to coins that look quite different.

One such example was a coin struck on a strip of metal where the cladding had run out. The result looked more copper than silver. And the details were missing from the center of the design on both sides. It was graded MS63, and sold at auction for $700.

Another 1978 dollar with the cladding missing from the reverse and graded MS65 sold for $1,400. 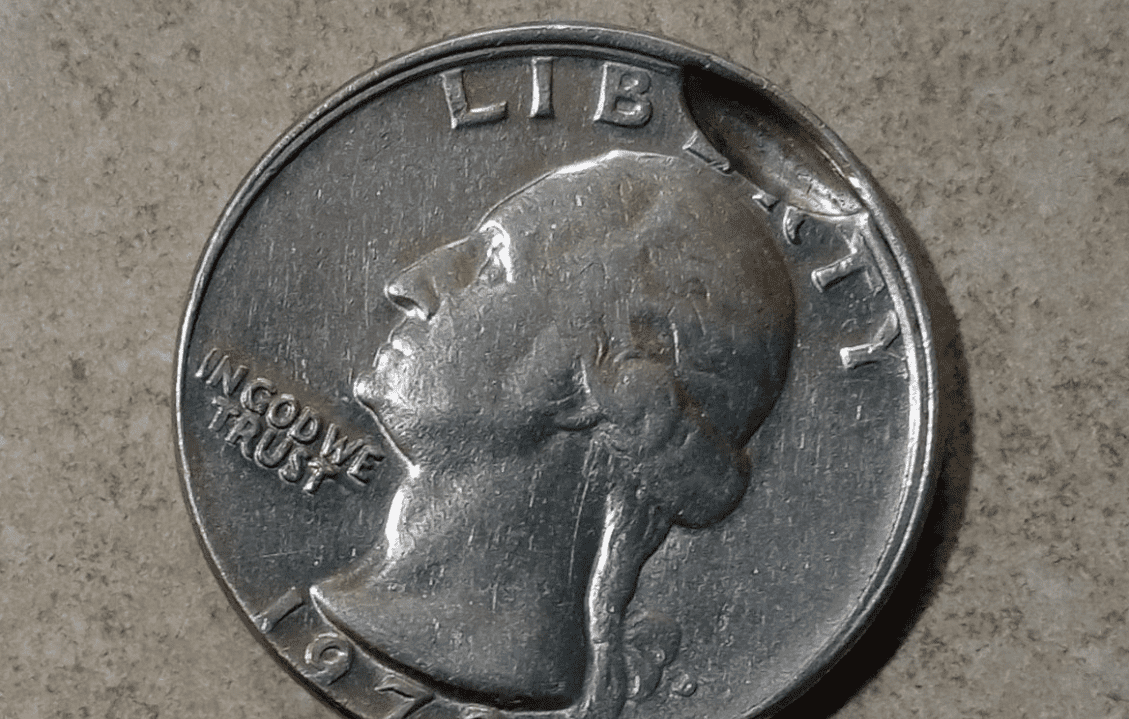 An indented strike happens when a blank planchet bounces so that it’s struck on the edge. That results in an indent on the coin, or sometimes in a coin that’s bent or folded.

A 1978 dollar with a 10 per cent indent on the obverse was presented at auction in 2016. It was graded MS62 by the PCGS, and the error was rather less spectacular than some indented strikes. It nevertheless sold for just under $180.

1978 Silver Dollar Broadstruck Out of Collar 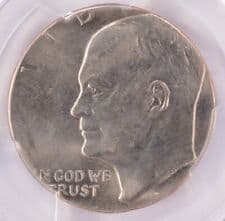 Another example of a striking error is when a coin is “broadstruck”. This happens when the collar that holds the metal in place is lost during the striking process.

As a result, the metal oozes outwards. The result is a deformed rim and a design that’s too close to the edge in some places, and too far away in others.

Another type of error is what’s known as “brockage”. This occurs when a coin that’s already been minted sticks to the die. That coin then strikes the next blank, producing a mirror image of the design.

The result is a coin with one normal side, and a mirror image of the same design on the other. Or sometimes the brockage is on only part of the coin.

A 1978 silver dollar with this error was presented at auction in 2009. At the moment it was struck, the obverse die had been partly blocked by the previous coin. The brockage was estimated at 10 per cent, and the coin was graded MS64. It sold for $750.

You can take a look at many of these errors in this YouTube video from Couch Collectibles.

What makes a 1978 silver dollar rare?

The 1978 silver dollar was produced in large numbers at all three US mint facilities, Philadelphia, Denver and San Francisco. So finding a circulated coin is easy, and you won’t have to pay much more than its face value.

Even proof coins of the highest quality are surprisingly common. That’s because they were produced in large numbers for collectors, and stored away carefully.

Among the rarest coins are those in mint state at the highest grades.

It’s possible that more examples will emerge as more modern-era coins are presented to coin grading services. But at present, the best quality coins known from either Denver or Philadelphia are graded MS67.  And to date, the numbers for both populations are in single figures.

Error coins are rare too, with particular errors sometimes creating a coin that’s truly one of a kind.

Which 1978 silver dollar is worth a lot of money?

Most 1978 dollars aren’t rare or valuable. But coins in mint state graded 66 will fetch in the low three figures. And those graded MS67 will fetch high four-figure sums.

Error coins are valuable too. The prices here depend on the rarity of the error, as well as how spectacular it looks.

Sometimes an error coin is also highly graded. A 1978 silver dollar combined a grading of MS67 with a strike that was 10 per cent off-center. It appeared at auction in 2017 and sold for just under $2,000.

Where is the mint mark on the 1978 silver dollar?

The coins that were struck in Philadelphia don’t carry a mint mark. Those made in San Francisco or Denver, however, do.

Look for it just above the third or fourth digits of the date, at the bottom of the obverse.