1977 silver dollars are amongst those known as “Eisenhower dollars”. The series was minted from 1971 to 1979 and marked a return to a larger, heavier dollar.

But how much is one of these dollars worth today? Is it just its face value? Or could it be worth more to collectors?

We’re going to look at the 1977 silver dollar value. And we’ll find out what features mark out the average coin from something that’s rarer and more collectable.

History of the 1977 Silver Dollar

The 1977 silver dollar is the penultimate mintage of the Eisenhower dollar, launched in 1971. It was a return to a larger, heavier dollar coin after a break of some 36 years. And when the last of the series was minted in 1978, it marked the end of the format.

The rising price of silver in the 1960s had led to a number of changes to coinage. In 1965, legislation was passed banning the use of silver in coins for five years. The expectation was that this would be reviewed in 1970.

With that date approaching, there began to be calls for new silver dollar coins. These came mainly from the US gaming industry. Silver dollars had largely been replaced by tokens in casinos, but punters preferred the real thing. A new silver dollar was in hot demand.

Then, in March 1969, Dwight D. Eisenhower, the former president of the United States, died. Calls to honor him in the nation’s currency joined with those for a new silver dollar. The Eisenhower dollar was the result.

Silver was still expensive, so most of the new dollars were silver in name only. The coins produced for circulation had a copper core plated in an alloy of copper and nickel. For collectors, a version with silver cladding, amounting to 40 per cent silver by weight, was minted too.

The new coins were popular with collectors, but not so successful for everyday use. People found them too large and heavy.

Research by the US Treasury found that most coins were used in only one transaction. And by one estimate, 70 per cent of circulating silver dollars were being used only in casinos.

As a result, the Eisenhower dollar was replaced by a smaller, lighter dollar coin in 1979. This one commemorated the women’s rights campaigner Susan B. Anthony.

Features of the 1977 Silver Dollar

The Obverse of the 1977 Silver Dollar 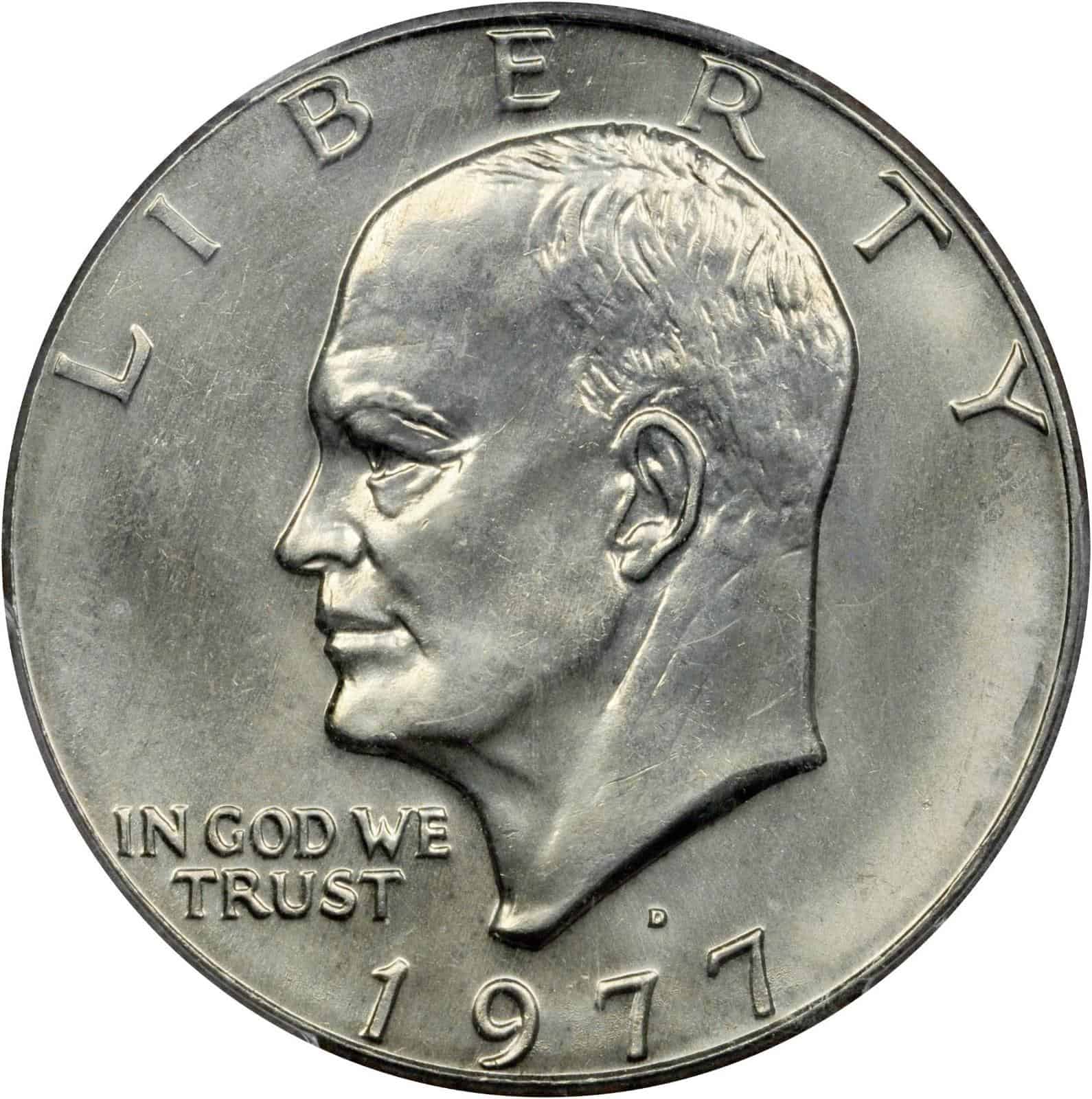 All the Eisenhower dollars have the same image on the obverse – a portrait of the late president. It was the work of Frank Gasparro, the US Mint’s chief engraver. And it was based on a sketch he had made of General Eisenhower at a 1945 rally to celebrate the Allied victory in World War II.

Gasparro had only six weeks to complete the designs for both sides of the coin. He nevertheless found the time to consult with Eisenhower’s widow, Mamie, and gained her approval.

Along with the portrait, the obverse carries the words “Liberty”, “In God We Trust” and the date wrapped around the bottom edge.

Only the coins struck in San Francisco and Denver have a mint mark – “S” for San Francisco and “D” for Denver. These were punched by hand, so their position varies slightly in each coin. Look for them just above the two 7s in the date.

The Reverse of the 1977 Silver Dollar 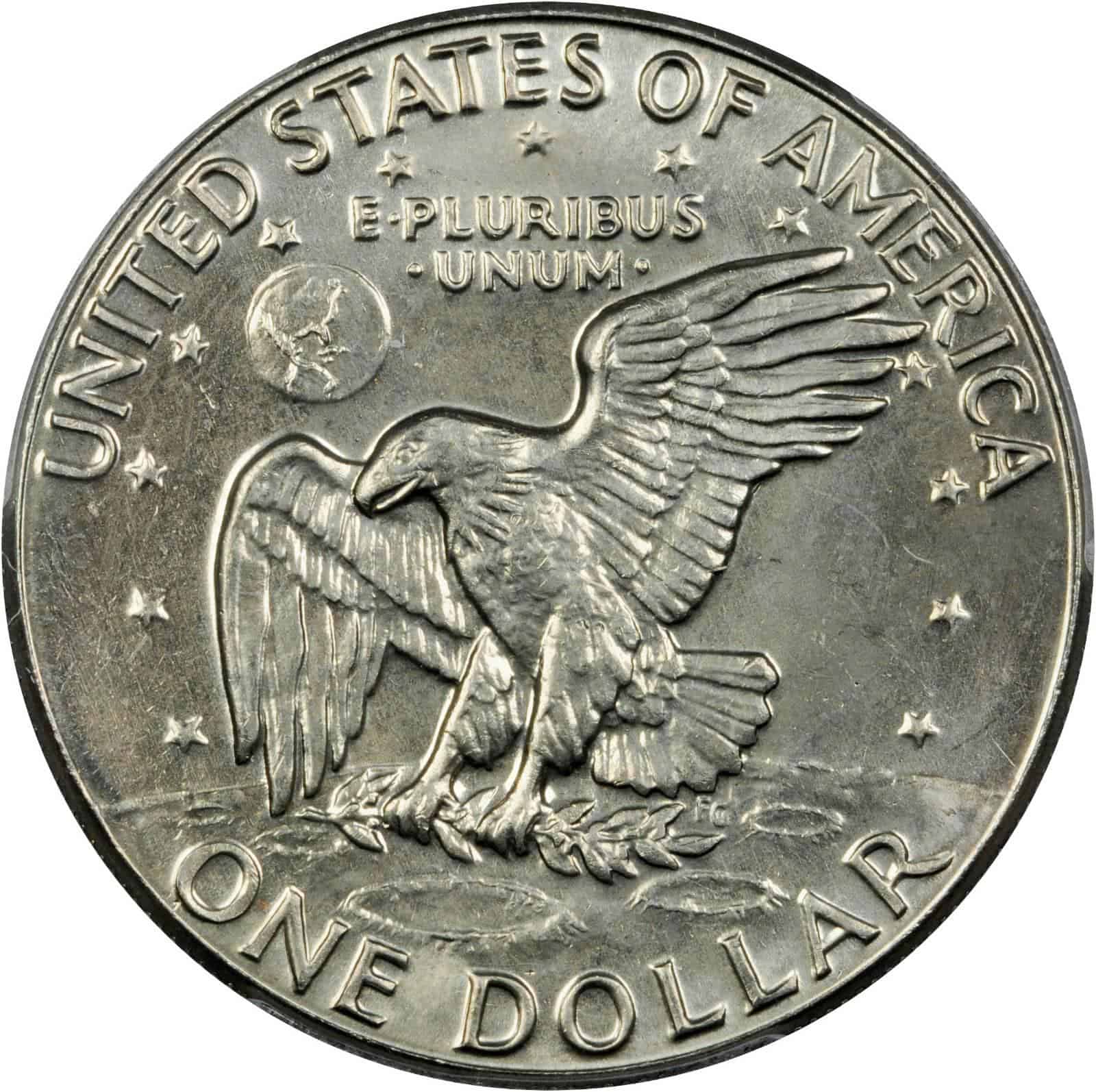 Gasparro designed two different images for the reverse, both using the eagle, the emblem of the United States.

The image that was eventually used was based on as space mission patch. It had been created by Michael D. Collins and others to mark the Apollo 11 lunar mission. It showed an eagle landing on the moon, an olive branch between its talons.

The expression on the eagle’s face was the subject of some controversy. There were complaints that it appeared too fierce. A peeved Gasparro amended the design to create what he called a “pleasant looking” visage.

The design is surrounded by stars, with the words “United States of America” above it and the denomination “one dollar” below. Towards the top of the coin is the Latin motto “E pluribus unum”, which means, “From the many, one”. It refers to the union of the states.

Other Features of the 1977 Silver Dollar

The 1977 dollar was produced with a copper core clad in an alloy of copper and nickel. The Eisenhower dollars are the only large format dollar coins ever produced in anything except silver.

Turn the coin on its side, and you’ll see parallel grooves all around the edge. This is known as a “reeded edge”. The design was first used in US coins at the end of the eighteenth century. And it was designed to stop people clipping the edges of gold and silver coins.

The mint marks on the 1977 silver dollar are unusually small for the size of the coin. They appear to have been produced using a similar sized punch to the one used for a dime.

You can take a closer look at the obverse and reverse of the 1977 Eisenhower dollar in this YouTube video.

By 1977, it was becoming clear that the larger format silver dollar was not proving successful with the public. The mintage in 1977 was much lower than for previous years. Only 12.6 million coins were struck in Philadelphia. And just under 33 million were struck in Denver.

That might sound like a lot of coins. But in contrast, in 1972, 92.5 million silver dollars were struck in Denver alone.

Nevertheless, as a relatively modern coin, there are still plenty of them to be found in circulated grades. And if you want to add one to your collection, it will cost you barely more than its face value. Expect to pay between $1.10 and $1.25. 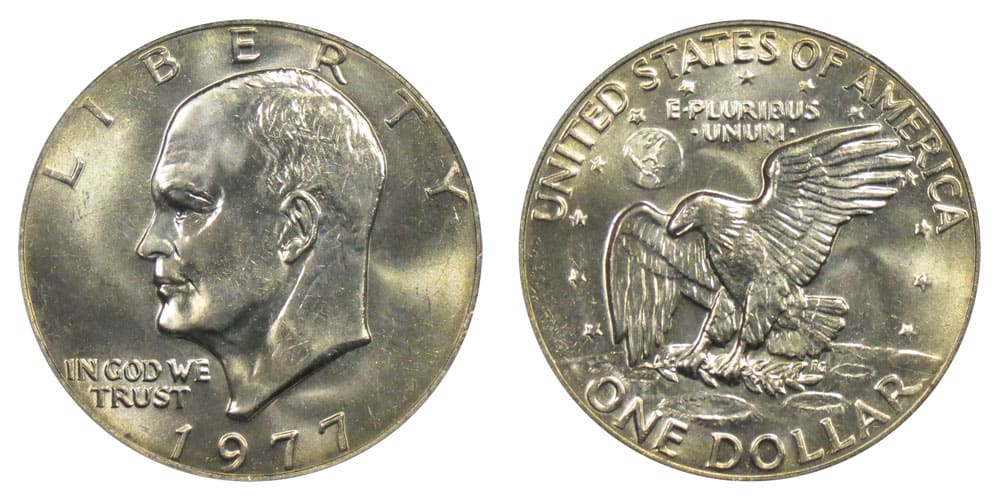 For uncirculated coins, the value depends on their quality. Lower quality coins – those graded mint state (MS) 60 to 63 generally sell for between $5 and $20.

But the big jump in price comes with coins graded MS67. There are far fewer of these, and only a couple at MS67+. That makes them the crème de la crème of 1977 silver dollars. 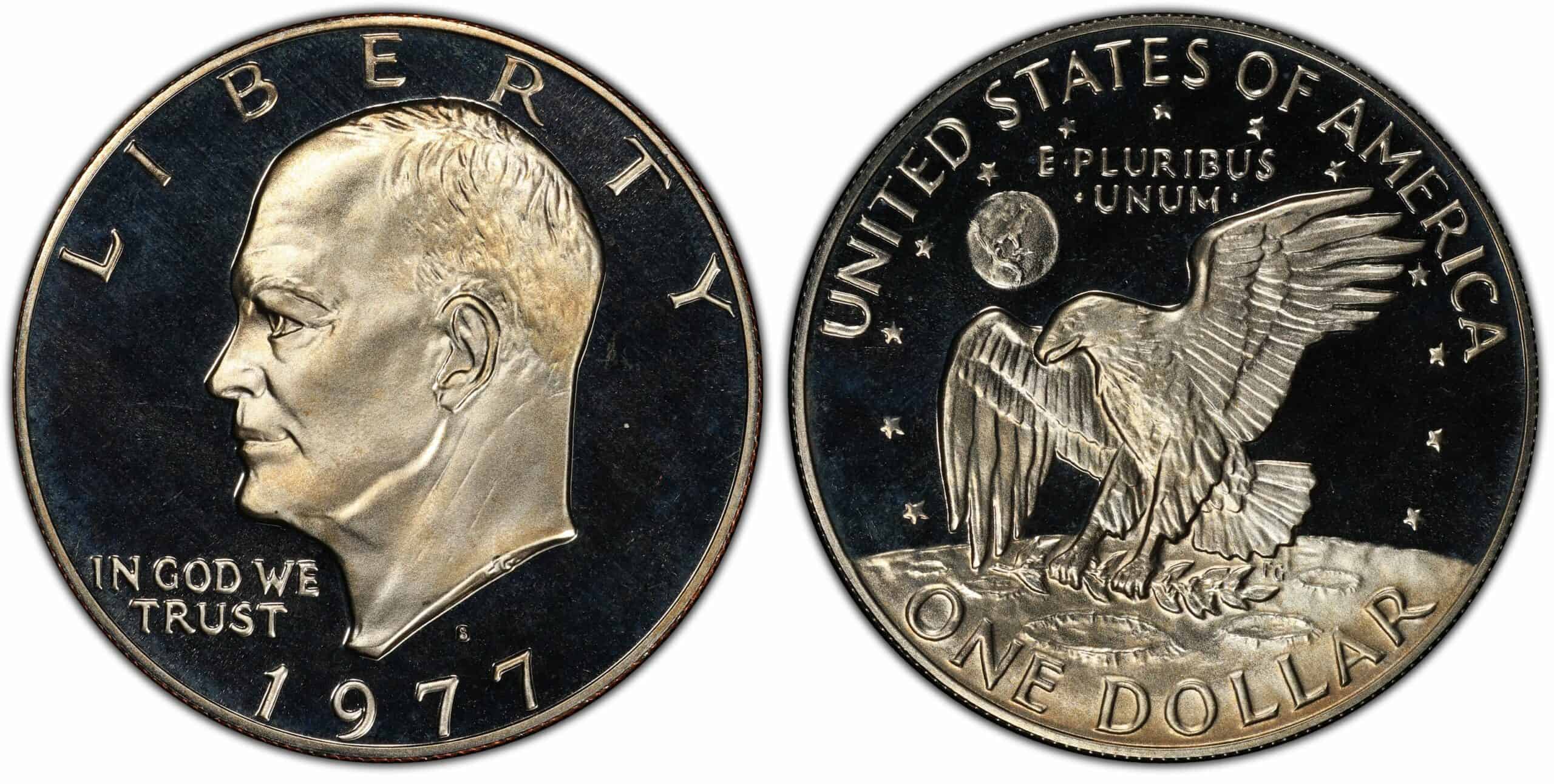 Proof versions of the 1977 silver dollar were struck in San Francisco and destined for the collectors’ market. The planchets were specially selected for their superior quality and polished to a high shine. Brand new dies were used too, producing beautifully detailed strikes.

3,251,252 proof silver dollars were struck that year. And most of those were carefully stored away after their purchase, ensuring they stayed in the best possible condition.

Most proofs today sell for anywhere between $7 and $15. But prices for the best quality examples are far higher. Those with the highest grading of 70 and the deep cameo designation can fetch anything from $400 to $700.

And occasionally a coin is sold for a price that far exceeds those levels. That was the case in 2008, when a 1977-S silver proof crossed the block at auction for a record-setting $7,015. 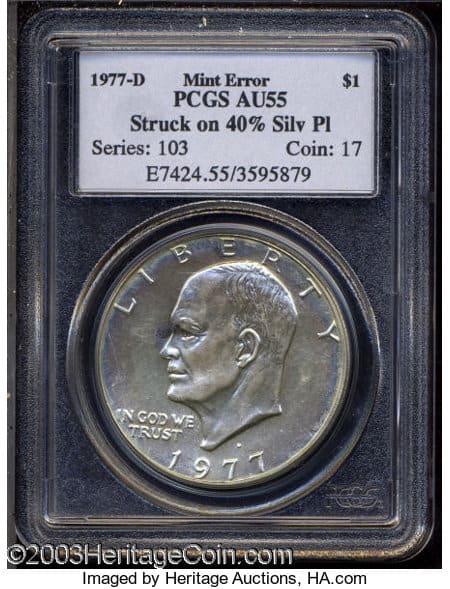 Some Eisenhower dollars were struck on a 40 percent silver planchet. These were made between 1971 and 1974. And in 1976, a special edition silver Eisenhower dollar was struck to celebrate the bicentenary of the Declaration of Independence.

But 1977 saw a handful of coins minted in Denver struck on the 40 per cent silver planchets left over from the previous year. These kinds of errors are known as “transition errors” – and they’re both rare and highly collectable.

One such coin, graded MS63 by the Numismatic Guaranty Company, came to auction in 2017. It had previously been sold just three years earlier, realizing a price of $12,925. When it crossed the block again, that price had risen significantly. The winning collector paid $17,625 to take it home. 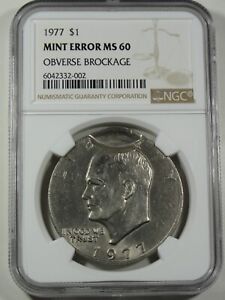 Very occasionally, a coin that has already been struck attaches itself to the moving die. It then strikes the next planchet, imprinting it with a mirror image of the design.

Coin collectors call this type of error “brockage”. Sometimes the whole of one side of a coin has the error. But more often, the obverse die is only partly blocked by the preceding coin.

That was the case for a 1977 silver dollar graded MS60 by the PCGS. It showed brockage on the obverse – a small ellipse at the top of the coin. Amusingly, it was positioned in such a way that it appeared to give Eisenhower a halo.

At the time of writing, it was being offered for sale through eBay at a fixed price of $1,200.

Die cap errors occur when a planchet sticks to the obverse die, repeatedly striking blanks. The result is a coin with a domed appearance on one side and a high rim where the metal has wrapped around the die. It looks a bit like a bottle top.

A particularly good example of this error in a 1977 silver dollar was presented at auction in 2006. It was also very highly graded at MS67. And it achieved the astonishing price of $29,900.

This YouTube video from Couch Collectibles takes you through a number of different 1977 silver dollar error coins.

What makes a 1977 silver dollar rare?

The 1977 silver dollar wasn’t produced in the same quantities as other mintages of the Eisenhower dollar. But it was still made in large numbers, and you can find circulated coins very easily.

Rarer are the finest examples of uncirculated coins. The better the quality, the fewer of them survive and the more expensive they are. Only 54 1977 silver dollars have been graded MS67 by the PCGS. And only two have been graded higher, at MS67+.

Also rare are coins produced by the Mint in error. Of these, transition errors – those resulting from a change to the coin composition or design – are among the rarest of all.

Which 1977 silver dollar is worth a lot of money?

The 1977 silver dollar with the biggest price tag is one that should never have existed. It’s the 1977 coin struck in error on the part-silver planchets left over from the previous year’s bicentennial coins.

Only a handful of these are known to exist, and you’ll have to pay big money to get hold of them. They appear for sale only very rarely. And the last time one was sold, it fetched north of $17,000.

The highest quality mint state silver dollars are valuable too. Find one graded MS67, and it could be worth anywhere from around $1,200 to $7,000. Those minted in Denver command a premium.

Where is the mint mark on the 1977 silver dollar?

But you’ll have to look closely to spot the mint mark. It’s very small on the 1977 dollars, the size better suited to a smaller coin like a dime. It appears on the obverse, just above the date.

The exact position varies slightly on each coin. That’s because the mint mark was punched by hand. Look for it somewhere between the two sevens in the date.