The US Mint started the Kennedy half-dollar production shortly after the President’s assassination in Dallas, TX, in 1963. The first coins were released in circulation in early 1964, replacing Franklin half dollars minted from 1948 to 1963.

The 1977 half dollar value is relatively low since this coin is modern, with high mintage, and without precious metal content. However, you should know that copper is pretty expensive these days. Therefore, these coins are typically worth more than their face value, regardless of condition.

History of the 1977 Kennedy Half-dollar

The US coinage includes several fifty-cent dollar designs since 1794, when the first such a coin went into circulation. Besides Kennedy half dollars that appear in three types, depending on the metal used for minting, all previous pieces contained silver.

The reason for the production of this coin is sad, and Eva Adams, then-director of the US Mint, reacted like lightning. She spoke with Gilroy Roberts, the chief engraver, about new coinage with Kennedy’s portrait only a few hours after the assassination.

They asked Jacqueline Kennedy about her attitude toward a new coin type. She selected the half-dollar to avoid changing existing pieces with the Washington image.

Congress approved the new half-dollar only a month after President’s death, and it was authorized by the end of the year. Following the quick procedure, the first ceremonial strike with modifying design started in two mints in February 1964.

The new halves were an enduring memorial honoring the beloved President. A sorrowing nation considered new coinage a souvenir and immediately started collecting these silver halves, causing a shortage in the market.

The Treasury Department data shows that 70,000 coins were sold out by the end of the first day after releasing them into circulation.

At the same time, most banks ran out of newly minted halves by noon, despite efforts to limit purchasing to only 40 pieces per buyer. The exceptionally high demand was in banks from Philadelphia and Boston.

The situation on the market became untenable, and Congress gave special permission to the US Mint to proceed with minting 1964-dated halves in 1965, increasing the mintage.

An additional international precious metal shortage forced the US Mint to change politics and start production of Kennedy half dollars with reduced silver content in the next year. For the following five years, Americans grabbed every silver-clad coin with undiminished zeal.

Due to this atypical situation, coins minted from 1971 to the present have contained a copper-nickel alloy. However, you can find pure silver specimens as a part of proof sets intended for collectors.

At the moment of the Kennedy half-dollar minting, halves were the most reliable and convenient American coins. They were suitable for daily exchange since Americans used them to pay for everyday shopping necessities.

However, the new half-dollar changed the situation on the open market. Since average citizens considered coins with Kennedy on the obverse souvenirs instead of monetary pieces intended for exchange, they lost their original purpose.

Therefore, you can rarely see this coin type in circulation, and some machines can’t even accept the currency of this dimension. Finally, the Kennedy half-dollar became a legacy and almost disappeared from the market, although banks regularly have stocks of these coins in the vaults.

In 2002, the US Mint finally accepted reality and stopped minting these coins for monetary circulation. Nowadays, mints occasionally strike new pieces for collections, and you can notice that new generations are unaware that coins they sometimes come across are legal currency.

Nowadays, you can recognize several factors affecting the Kennedy half-dollar price, including:

Year – The year is always one of the crucial factors for collectors, but it is even more important in this case. Knowing the minting year, you can infallible determine the coin composition. That is particularly significant for pieces without precious metal since they are worth practically nothing in low grades.

Compound – As expected, the most expensive is the first half dollars minted in 1964 because of age and 90% silver content. Collectors also appreciate silver-clad pieces, while those without precious metal are the least collectible.

Condition – Like all other collectible coins, the Kennedy half-dollars’ prices depend on quality. You can be sure that the most pricey are specimens in the highest grades, while low-rated pieces can be interesting for collectors or not, depending on the precious metal content.

Those made of pure silver or even silver clad are worth the silver price even in the worst condition. Specimens made of copper and nickel are often valuable only in the mint state, while you can buy damaged and worn-out pieces for the price of copper they contain.

Varieties and errors – Collectors like having Kennedy half-dollar varieties and errors, making them valuable. However, the final price depends on demand and each piece’s rarity and collectability. All in all, this series has no particularly rare or expensive issues.

Features of the 1977 Kennedy Half-dollar

The 1977 Kennedy half dollars are beautiful modern coins with a stylish design made by two talented engravers. Like other coins from the series, they honor the American President who tragically died in Dallas. 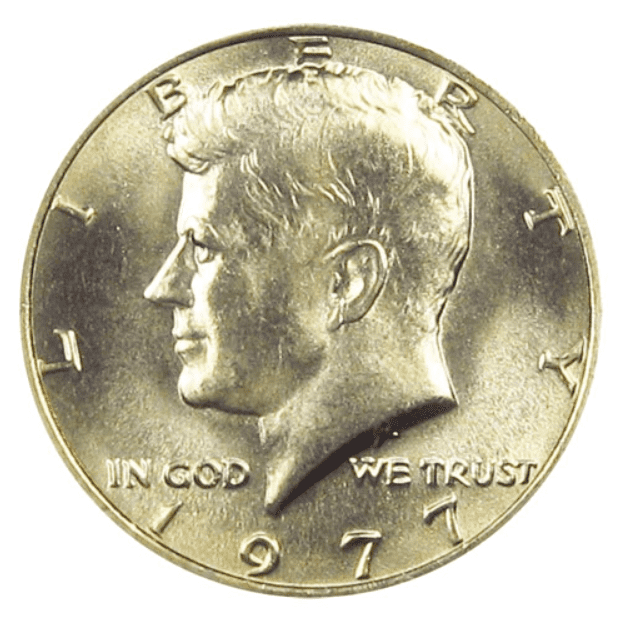 Although the design for this coin was hastily made right after the assassination of the 35th US President, it turned out pretty well. Gilroy Roberts depicted John Fitzgerald Kennedy’s portrait taking up most of the coin’s front side.

He surrounded it by LIBERTY and the DATE struck along the entire rim. You can also see the inscription, IN GOD WE TRUST, at the foot of the central composition and the mint mark below it. 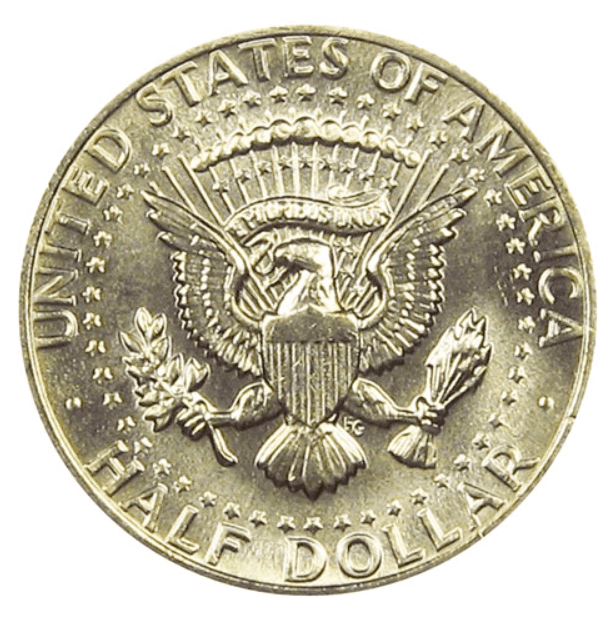 The reverse of the Kennedy half-dollar minted in 1977 is the same as in the previous pieces. Frank Gasparro did an excellent job with this design. The country name and denomination surround a centrally positioned heraldic eagle with the Latin inscription above its head.

The eagle, representing the American national bird, wears a shield on its chest and holds two symbols in its talons:

There is also a circle of 50 five-pointed stars around the eagle, one for each state.

Other features of the 1977 Kennedy half-dollar

The 1977 Kennedy half-dollar is a round coin of fifty cents with a reeded edge. Its composition includes 91.67% copper and a low nickel percentage in total. Since this coin is a clad type, it contains a copper core coated with a layer made of 75% copper, while the rest is nickel.

Value Guides of the 1977 Kennedy Half-dollar

In 1977, the US Mint struck 78,298,258 Kennedy half-dollars in three different mints. Two types came with the mint mark, while those from Philadelphia are without a particular letter on the obverse. 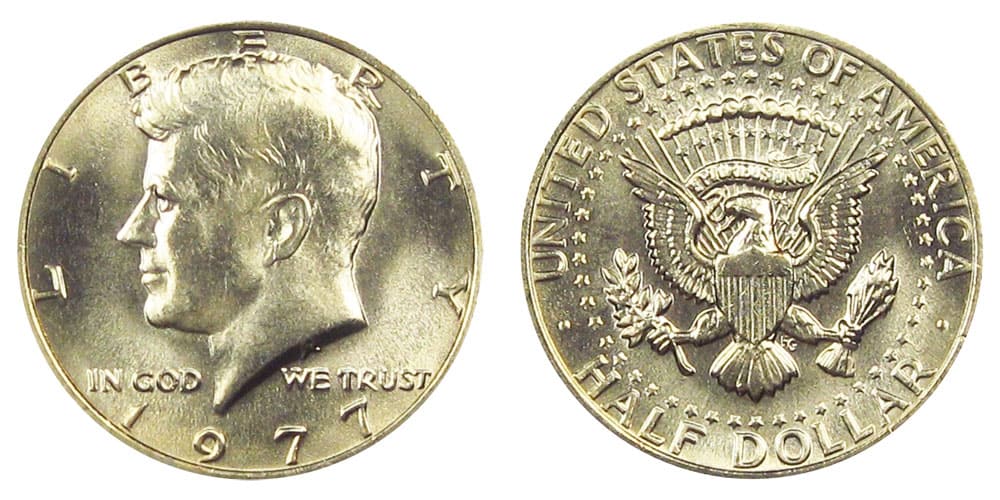 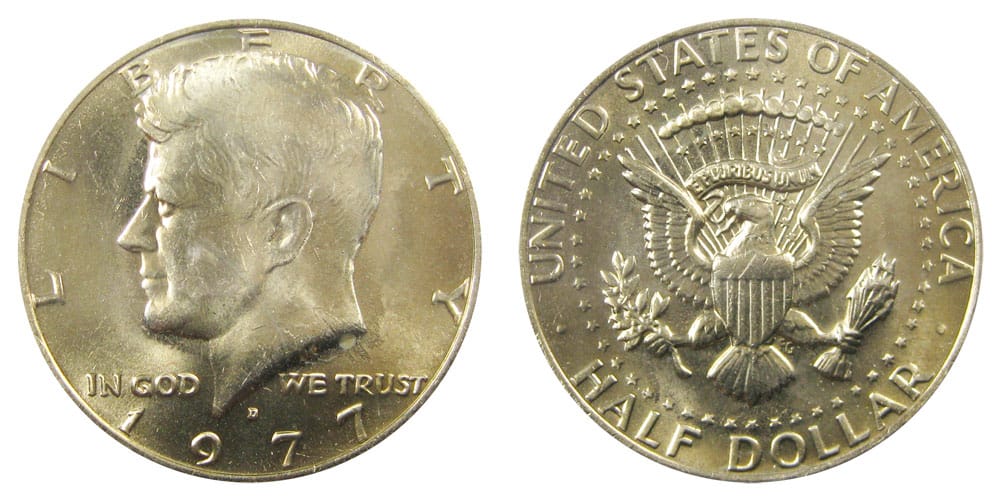 One of the halves produced in this mint is the most expensive Kennedy half-dollar struck this year. On collector bought this coin with MS 64 rating for $9,200, which was a fantastic price for this coin type. 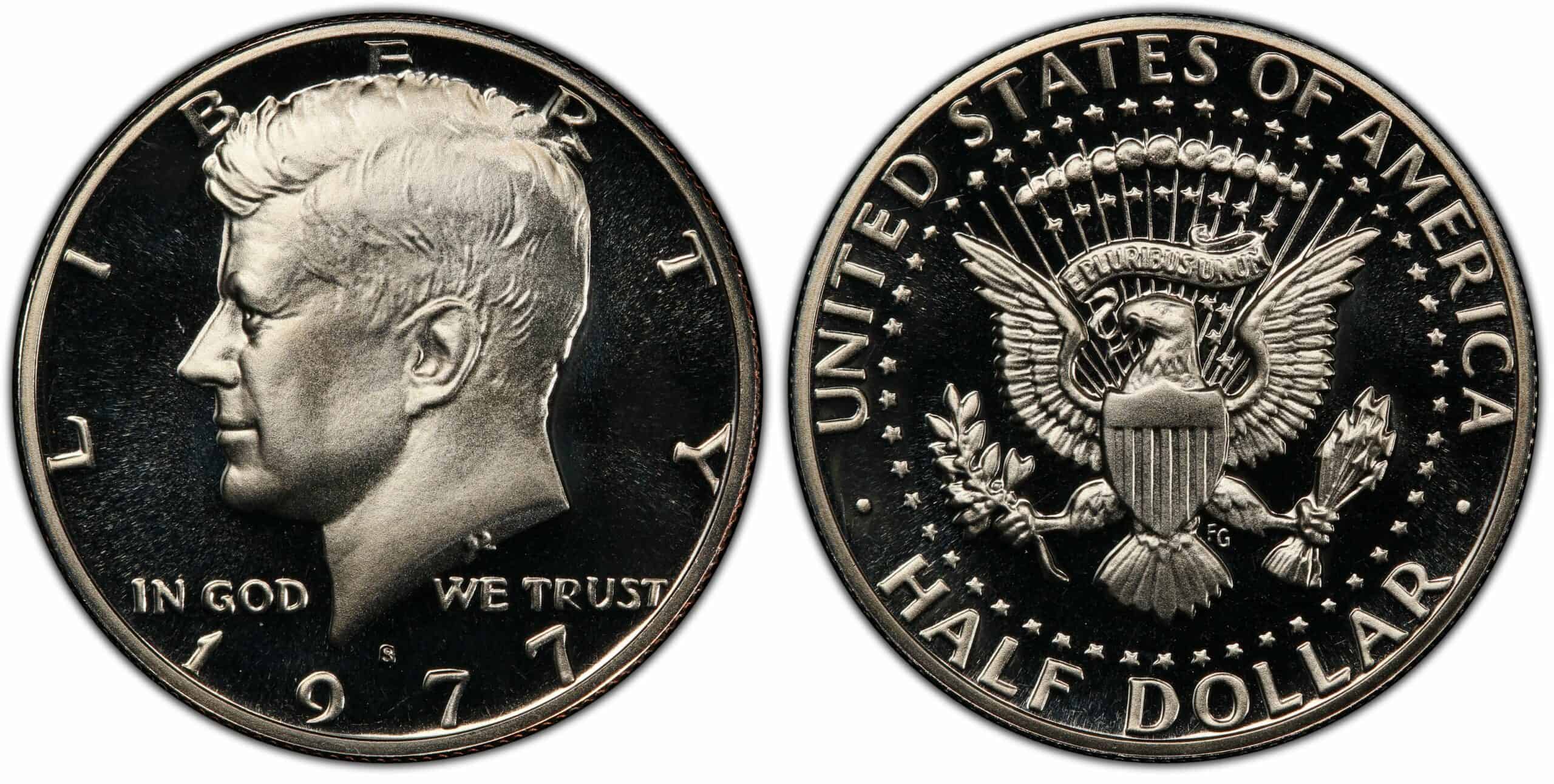 You can find one error characteristic only for Kennedy half dollars struck in Denver in 1977, making them unique in the entire series. Besides, there are a few less significant imperfections, like Double Die Obverse coins with a slightly higher value compared with those from regular strikes.

The 1977 D Kennedy half-dollar on a silver-clad planchet

The Denver mint produced 31,449,106 halves on blanks covered in copper and nickel alloy. Somehow, a few pieces were struck on a silver-clad planchet. It is known that it was used in the San Francisco mint for bicentennial half dollars the previous year, but how it ended up in the wrong place was a mystery.

Unlike coins from regular strikes weighing 0.4 ounces (11.34 g), these errors are heavier and weigh 0.40565 ounces (11.5 g). Collectors found about ten such halves with a silver-clad surface, and each piece is worth a few thousand dollars.

FAQ about the 1977 Kennedy Half-dollar

The rarest Kennedy half dollars struck in 1977 are errors from Denver. These pieces were made on the silver planchet and are valuable nowadays for collectors interested in error coins.

Which 1977 Kennedy half-dollar is the most costly?

How much is the 1977 Kennedy half-dollar (No Mint mark) worth?

Half-dollars produced in the Philadelphia mint in 1977 are common coins with a relatively low price. These inexpensive pieces come with a price range from $0.70 to $30 in most cases, but the best-rating ones are worth about $145.

What is the most expensive and collectible Kennedy half-dollar?

Interestingly, numerous Kennedy half dollars are worth far more than their face value, but a few are particularly pricey. These coins reached tens of thousands of dollars at auctions, and the top-notch ones are: