Three mints produced Eisenhower dollars, but only the one in San Francisco minted silver coins. Well, it is valid unless we count that one from Philadelphia. Interestingly, most pieces never circulated throughout the US, and people could see them only in casinos on the West Coast.

The 1976 Silver dollar value is pretty modest, although they are relatively rare. Only top-notch pieces can be worth hundreds, sometimes even thousands of dollars. Other Ike dollar varieties are made of copper and nickel and can sometimes be more expensive than silver specimens. It is pretty weird, right?

1969 was one of the crucial years in US history. Dwight Eisenhower, a WW2 American general and the 34the President, passed away only a few months before the first landing on the Moon.

In that period, the US Mint planned to start producing a new dollar, and Congress looked for a coin design to honor both events. Frank Gasparro managed to create a dollar that adequately commemorated the 1969 Apollo 11 Moon mission and respected the war hero and proud American President.

The Eisenhower dollar, minted from 1971 to 1978, was the first one-dollar coin after the US Mint ended the Peace dollars production in 1935. The curiosity was that pieces intended for circulation didn’t contain silver, and only collectible pieces contained 40% of this precious metal.

Eisenhower dollar struck in 1975 and 1976 came with the 1776-1976 date, and only the San Francisco mint produced silver pieces. You can recognize two clad types, Type 1 and Type 2, minted in all three mints. On the other hand, silver Bicentennial pieces can be only with the Type 1 reverse.

The difference is in the lettering thickness. Bicentennial Ike dollars Type 1 came with bold letters on the reverse, while Type 2 is recognizable after thin lettering. Type 1 coins are rare in high grades, while Type 2 typically comes with a better rating and quality strikes.

Interestingly, new dollars mostly appeared in Nevada casinos, where they replaced tokens. These coins are highly collectible nowadays, thanks to limited minting and time of use, low price, and several variations.

Since a huge number of Ike dollars was melted because of silver content, surviving pieces are often worth more than their face value. Some high-quality specimens reach a few hundred or even thousand dollars at auctions and represent a jackpot for every collector.

Frank Gasparro designed the Eisenhower dollar to honor Dwight Eisenhower, the 34th American President. These coins minted from 1971 to 1978 were the last of the big coin types produced for circulation, but they never widely circulated in most parts of the US.

The obverse of the 1976 Eisenhower silver dollar 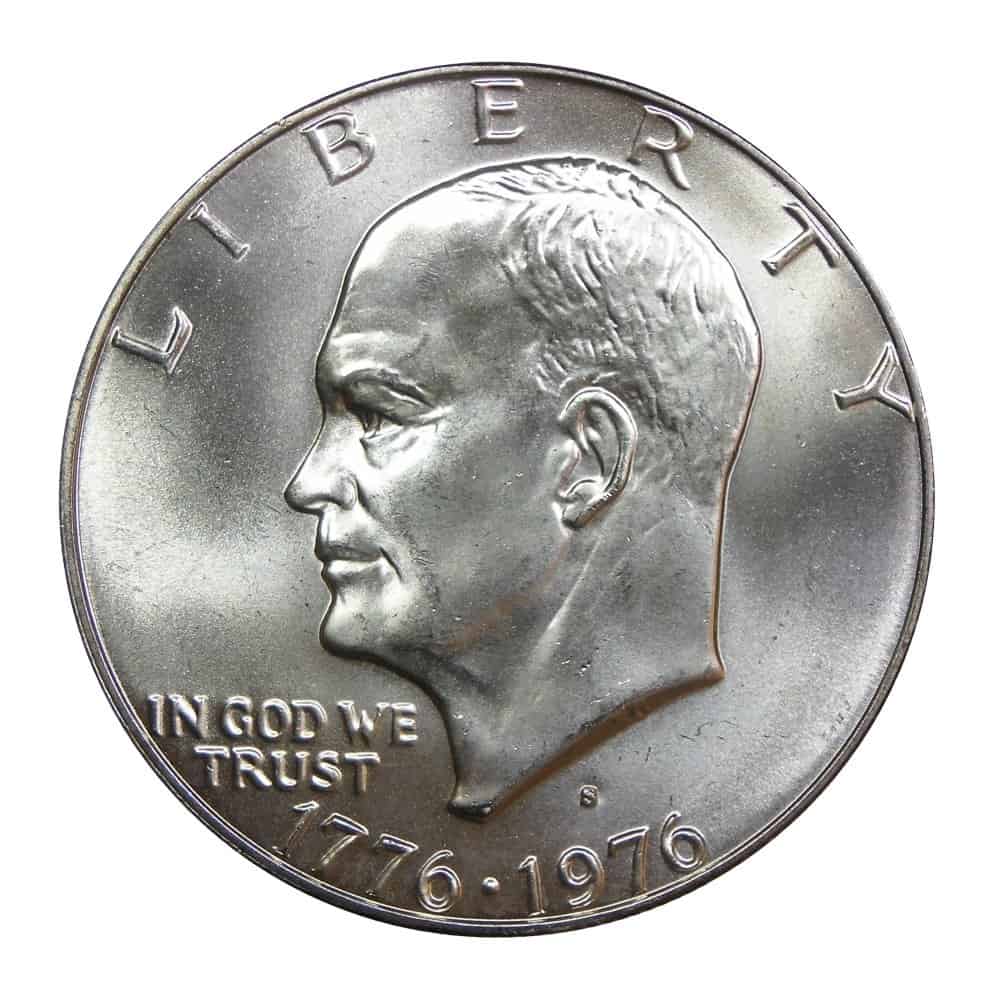 Designer and sculptor Frank Gasparro was the 10th Chief Engraver of the US Mint at those time. He created the 1976 Silver dollar obverse with centrally positioned Eisenhower’s portrait facing left. Above the 34th US President’s head is the word LIBERTY, while the bicentennial double date 1776-1976 is struck below his image.

The motto IN GOD WE TRUST completes a simple design of this coin side. Since only the San Francisco mint produced silver dollars this year, all have a small letter S on the right side between the President’s neck and the date.

Remember that the Philadelphia mint struck one Eisenhower silver dollar Type 2 in 1976. This rare piece doesn’t have the letter S on the obverse.

The reverse of the 1976 Eisenhower silver dollar 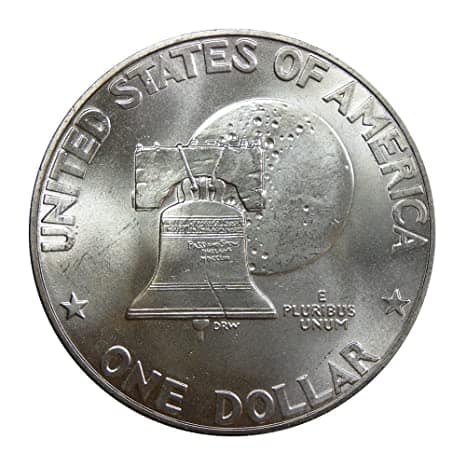 David R. Williams was a 22-year-old art student when he won the competition for the reverse design of the bicentennial Eisenhower dollar. The idea was to create an edition minted in 1976 only to honor the Declaration of Independence’s 200th anniversary.

Unlike a regular Eisenhower dollar with the American eagle struck on the reverse, this commemorative coin has the Liberty bell in the center instead. This symbol of freedom is placed in front of the Moon.

The idea was to remind Americans of the historical landing of Apollo 11 on the Earth’s satellite in 1969. The country name, the UNITED STATES OF AMERICA, is proudly struck above the composition, while the denomination ONE DOLLAR is written along the bottom coin rim.

The reverse also includes the Latin saying E PLURIBUS UNUM right of the bell. Plus, there are two stars placed between the country name and denomination and designer’s initials, DRW, just under the bottom bell edge.

Other features of the 1976 Eisenhower silver dollar

This round coin with 198 reeds on edge is thick 0.10157 inches (2.58 mm) and has a diameter of 1.5 inches (38.1 mm). What sets it apart from the standard Ike dollar is the double date and unique reverse design created especially for this anniversary year.

The US Mint produced special Ike commemorative dollars with changed reverse in 1976 to celebrate America’s Bicentennial. The San Francisco mint produced 4,908,319 uncirculated Ike silver dollars in 1976, of 17,753,141 pieces struck during the minting period.

The Philadelphia mint struck only one 1976 No S Eisenhower dollar Type 2 (40% silver). This Ike silver dollar was the only one without the S mint mark, and collectors consider it the rarest modern American coin.

No one can say how and why this unique silver dollar came about. Even though you can hear a few theories, there are no confirmations for any of them.

One of the possibilities is that the Philadelphia mint struck the one-of-a-kind silver dollar as the strike trial version, but it ended up in circulation by mistake.

The other possibility is that one of the Congress members got it for some reason and mistakenly used it as an ordinary coin. It was discovered in a Woodward and Lathrop department store in Washington, DC, and finally ended up in Mitchell Spivack’s hands.

This coin expert considers this unique Eisenhower coin as the rarest piece in US coinage history. It is one of a kind, plus it was minted to commemorate the US Independence’s 200th anniversary. What better could a collector expect?

The value of this unique silver dollar with a double 1776-1976 date has not yet been officially established. It is highly likely that it will never be offered at a public auction, so its price is a frequent source of debate and confusion among collectors.

The San Francisco mint produced 4,908,319 Eisenhower dollars in 1976 as a part of the US Bicentennial coinage. All were in a group of Type 1 coins with thick, sans-serif letters.

These pieces contain 40% silver, so even coins in the worst condition are worth at least the silver melt value of about $6. On the other hand, you can get about $14 for one coin in high grades.

The most expensive Ike silver dollar struck in the San Francisco mint is the one in an MS 69 grade. One collector paid $4,560 for it at Heritage Auctions in 2019.

Besides buying individual silver bicentennial dollars, you can also find them in 3-piece sets. They contain a quarter and half-dollar beside a dollar coin. 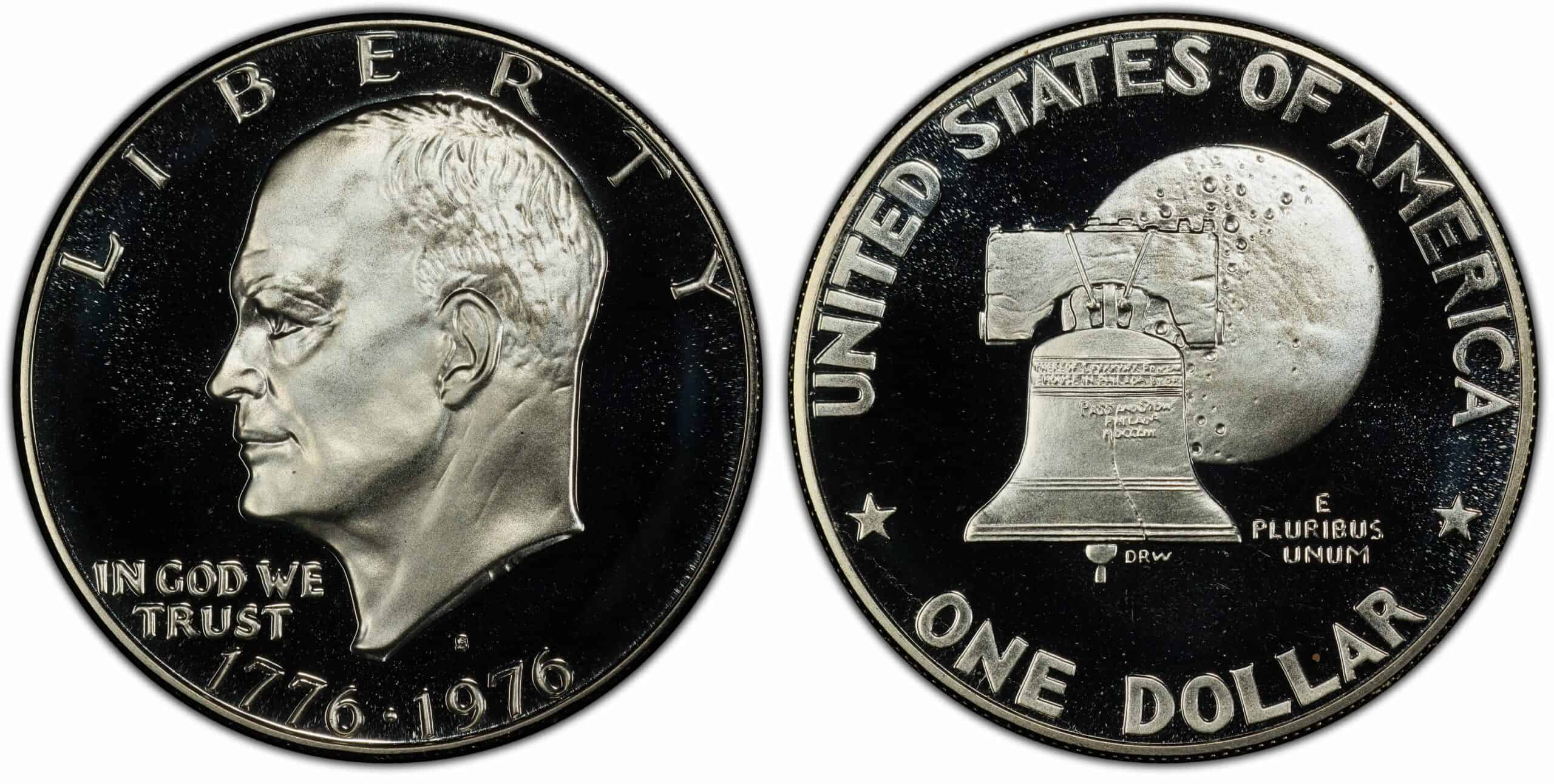 The San Francisco mint produced 3,998,621 Ike silver proof dollars. However, their actual number on the market is significantly lower because a part was melted due to the precious metal content. You can buy it along with a quarter and a half-dollar in a 3-piece mint set.

The most expensive Ike silver dollar is the one in PR 70 grade with deep cameo contrast. It was sold at Heritage Auctions in 2008 for an impressive $6,900.

Reverse indented by a quarter-dollar planchet

Error coins are excellent examples of how something can go wrong during the minting. The interesting thing is that collectors consider the oddest coins the most attractive and desirable.

One of these pieces, with a strange reverse edged by a quarter-dollar planchet, reached almost $2,000. It occurred as a result of mixing a Washington quarter dollar planchet with the one intended for the Eisenhower dollar.

FAQ about the 1976 Eisenhower Silver Dollar

The Philadelphia mint struck only one 1976 bicentennial Ike silver dollar without the S mint mark as a striking trial. Therefore, collectors consider it the rarest modern American coin.

Which 1976 Eisenhower silver dollar is worth a lot of money (according to PCGS)?

Interestingly, they are not the most expensive Ike dollars struck this year. For comparison, one collector paid $25,300 for the 1976 S PR 70 Eisenhower clad dollar Type 1 at Heritage Auctions in 2011.

How much is the 1976 No Mint mark Eisenhower silver dollar worth?

No one knows the price of the 1976 No S Eisenhower dollar Type 2 (40% silver) since the only piece ever produced has never been on the market.

How to know whether the 1976 Eisenhower dollar is silver?

In most cases, you can recognize the Eisenhower silver dollar by its edge. If you can only see a silver edge without a strip, you can be sure that this piece is made of this precious metal. On the other hand, clad coins have a copper stripe along the edge.