The year 1976 was memorable for many Americans, and the entire country celebrated the 200th anniversary when the Founding Fathers signed the Declaration of Independence. As expected, the US Mint prepared commemorative coins for this special occasion despite stopping the commemorative coin program in 1954.

After Congress accepted the law about a temporary quarter reverse’s redesign, three mints struck five quarter types during 1975 and 1976. The 1976 Quarter value significantly varies, depending on the coin type, composition, and the mint they came from. Let’s take a look.

History of the 1976 Washington Quarter

Three mints struck five 1976 Washington quarter varieties to commemorate two centuries of independence. They were the first pieces from the US commemorative coin program after a break from 1954.

The minting of coins with the double 1776-1976 date started on July 4, 1975, and lasted throughout 1976, so you can’t find any coin struck in 1975. The idea was to prevent coin hoarding and to enable their timely availability.

Since the US Mint released almost 1.7 billion pieces into circulation, these coins are not particularly expensive. However, both silver and clad bicentennial quarters are the most collected coin in American coinage history, thanks to their significance and uniqueness.

Features of the 1976 Washington Quarter

The obverse of the 1976 Washington quarter 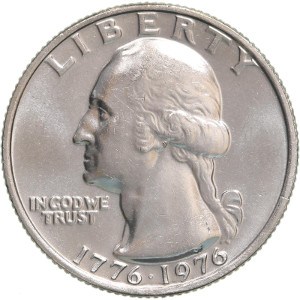 Designer and engraver John Flanagan based the Washington image on the President’s portrait made by French sculptor Jean-Antoine Houdon in 1785. You can see the American motto IN GOD WE TRUST, in front of his bust facing left.

The obverse design is pretty simple compared to old American coinage. The word LIBERTY placed on the top is struck along the coin rim, while the date 1796-1976 is below the portrait. A small letter D or S is placed on the right side, next to the President’s bow tiding his hair in a ponytail.

The reverse of the 1976 Washington quarter 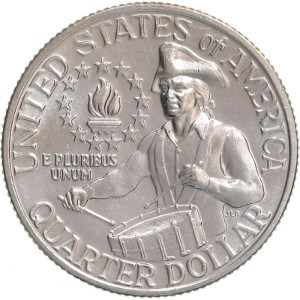 Such a special occasion required a unique coin reverse, and designer and engraver Jack L. Ahr did an excellent job with this commemorative quarter. He placed a revolutionary drummer instead of the traditional eagle in the reverse center.

Along the coin rim, you can see the UNITED STATES OF AMERICA and the denomination QUARTER DOLLAR. They surround the soldier and a torch inside the thirteen stars circle on his left side. Finally, the motto, E PLURIBUS UNUM, is below the torch.

Other features of the 1976 Washington quarter

You can find two types of bicentennial quarters minted in 1976 when it comes to the metals they contain. The 1976 clad Washington quarter contains 91.67% copper.

The silver Washington quarter is actually a silver-clad coin made of 60% copper and 40% silver. Its core contains 20.9% silver, while a coat has 80% of this precious metal. 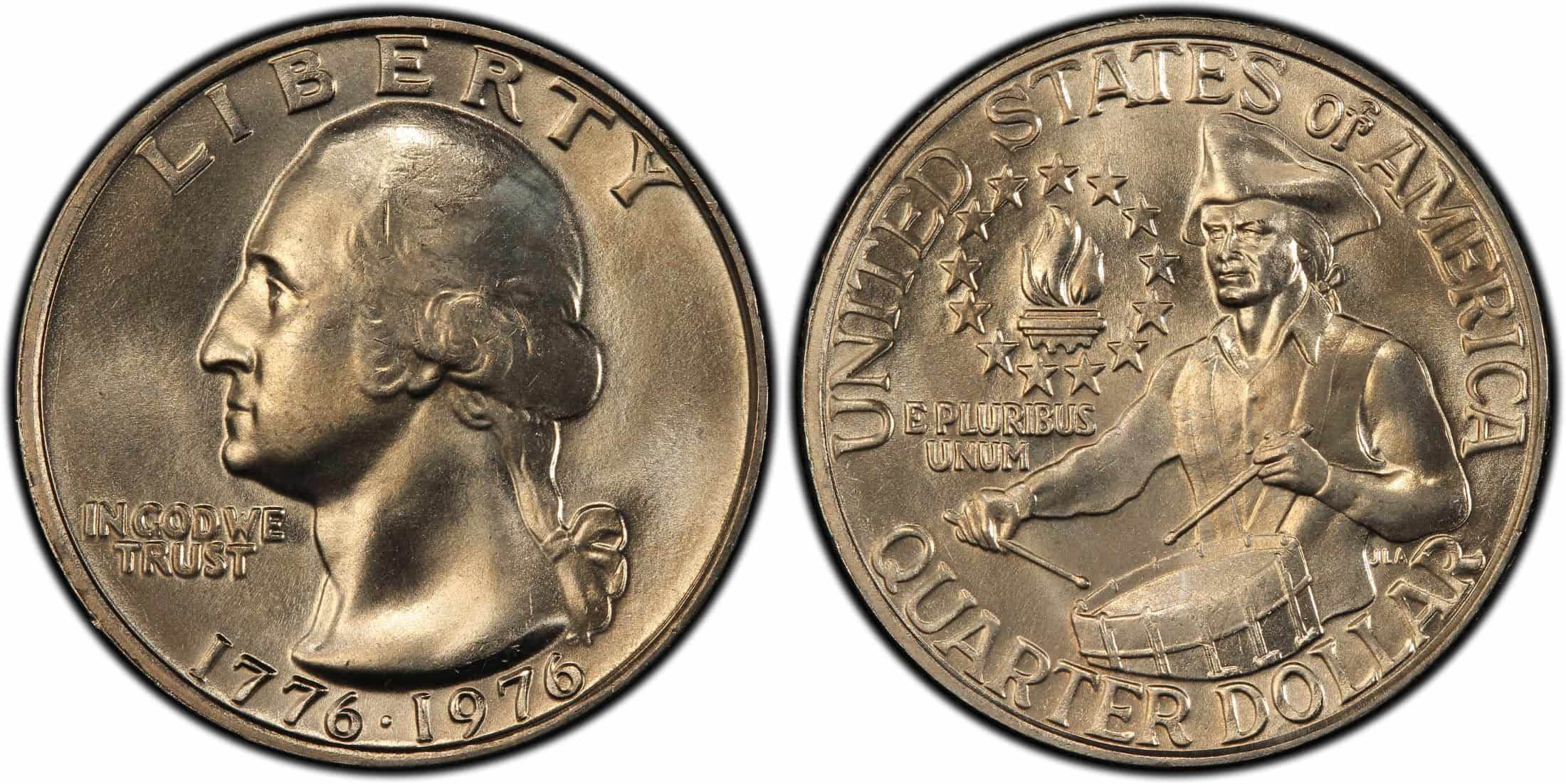 The Philadelphia mint struck 809,784,016 clad Washington quarters without the mint mark in 1976. They contained a copper core with a layer of 75% copper with added nickel, making these coins copper pieces with 91.67% of this metal in total.

Pieces in circulation are worth their face value, while you can get $0.35 to $60 for those in the mint state. The most expensive bicentennial No Mint mark Washington quarter in MS 70 grade minted this year is the one sold on eBay in 2022 for $1,200. 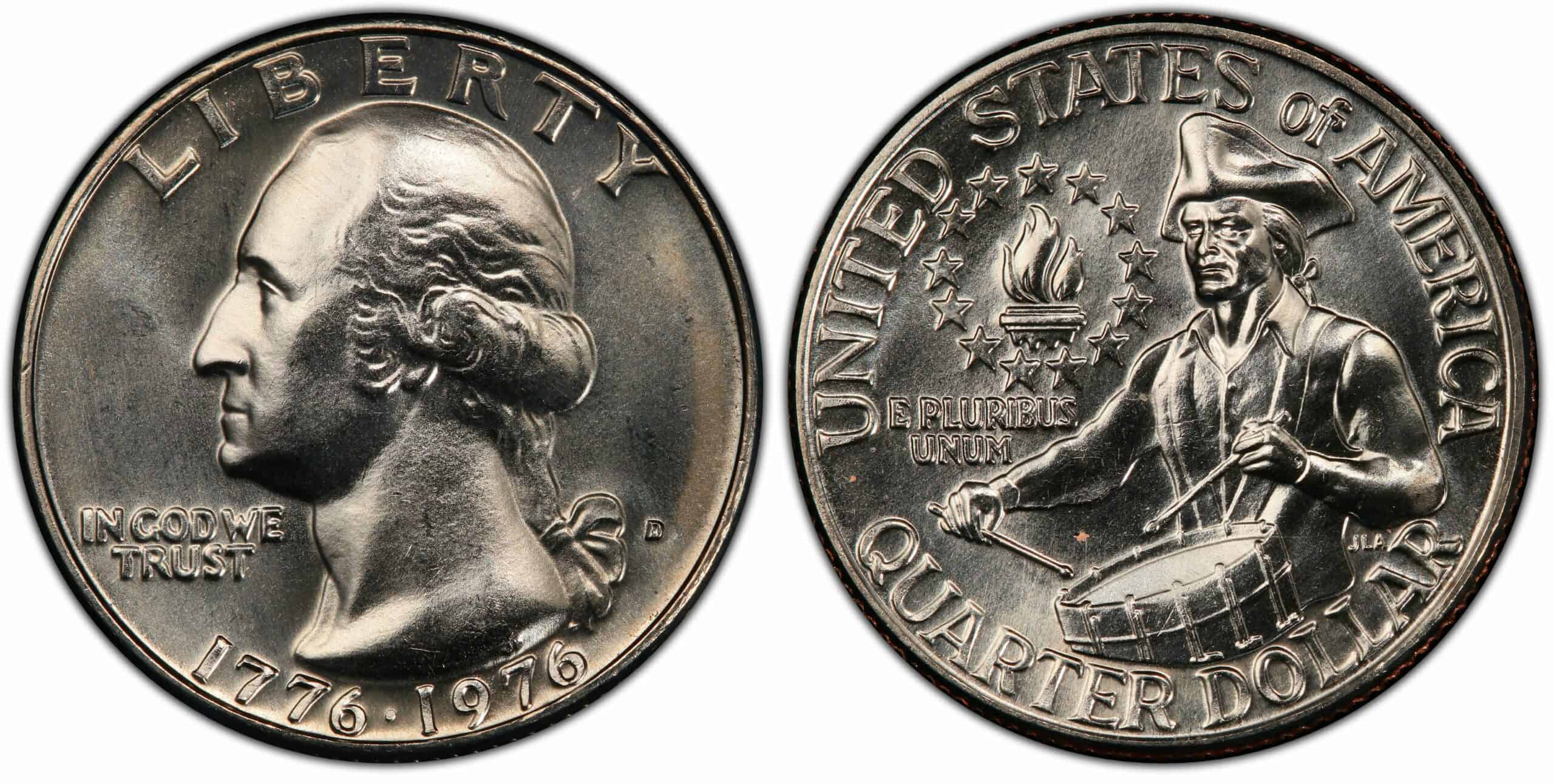 The most expensive was the specimen that appeared at Heritage Auctions. One collector paid $6,463 for this beautiful 1976 D MS 68 clad Washington quarter in 2017. 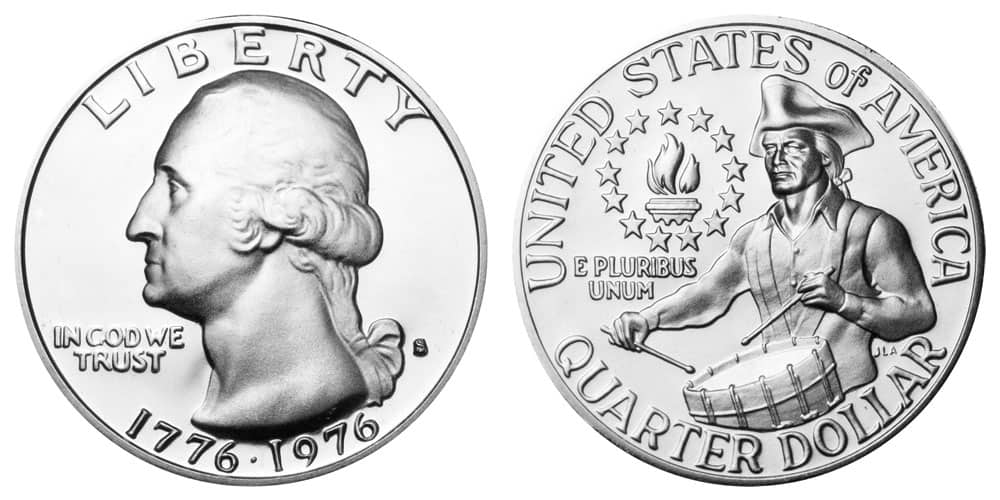 The San Francisco mint produced three coin types in 1976, including the one from regular strike and two proof quarters. All survived silver-clad coins made of 40% silver with copper are worth $1.41 to $84 on the current market.

Even though experts estimate that pieces in MS 69 grade are worth about $6,000, one owner sold his specimen for a significantly lower price. Someone paid an unbelievably low $6 for the 1976 S MS 69 DCAM silver Washington quarter on eBay in 2022.

On the other hand, the most expensive 1976 S MS 69 silver Washington quarter was sold at Heritage Auctions in 2019. One collector set aside an impressive $19,200 to add this gem to his collection. 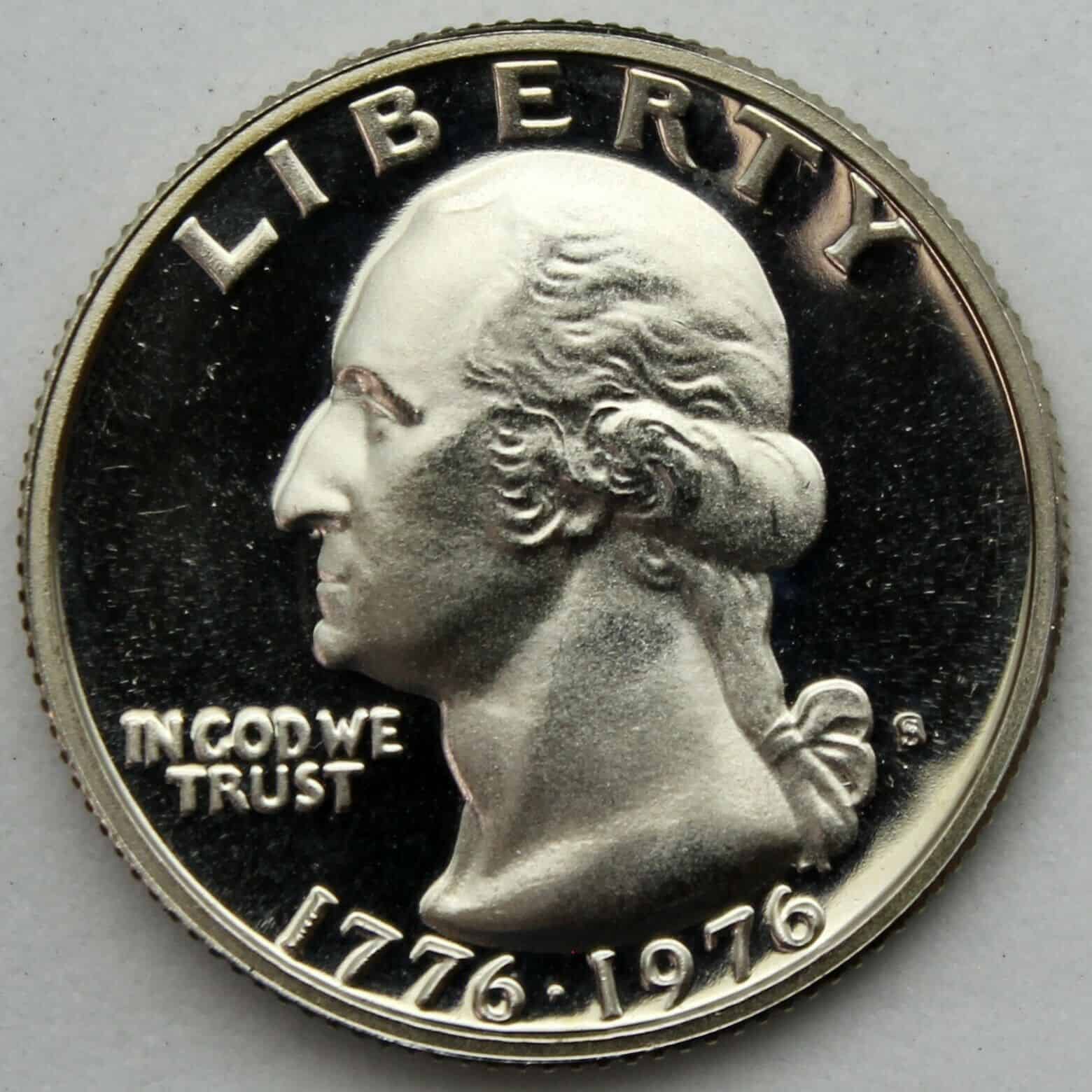 Precisely 4,000,000 silver proof Washington quarters with the S mint mark came from the San Francisco mint this year. You can buy one of these beautiful pieces for a relatively modest $8 to $28, but those in MS 70 grade often cost about $180.

However, you can find more valuable coins with beautiful toning and excellent texture for significantly higher prices. For instance, one collector paid $13,500 for the 1976 S PR 25 silver proof Washington quarter on eBay in 2019, despite its low grade. 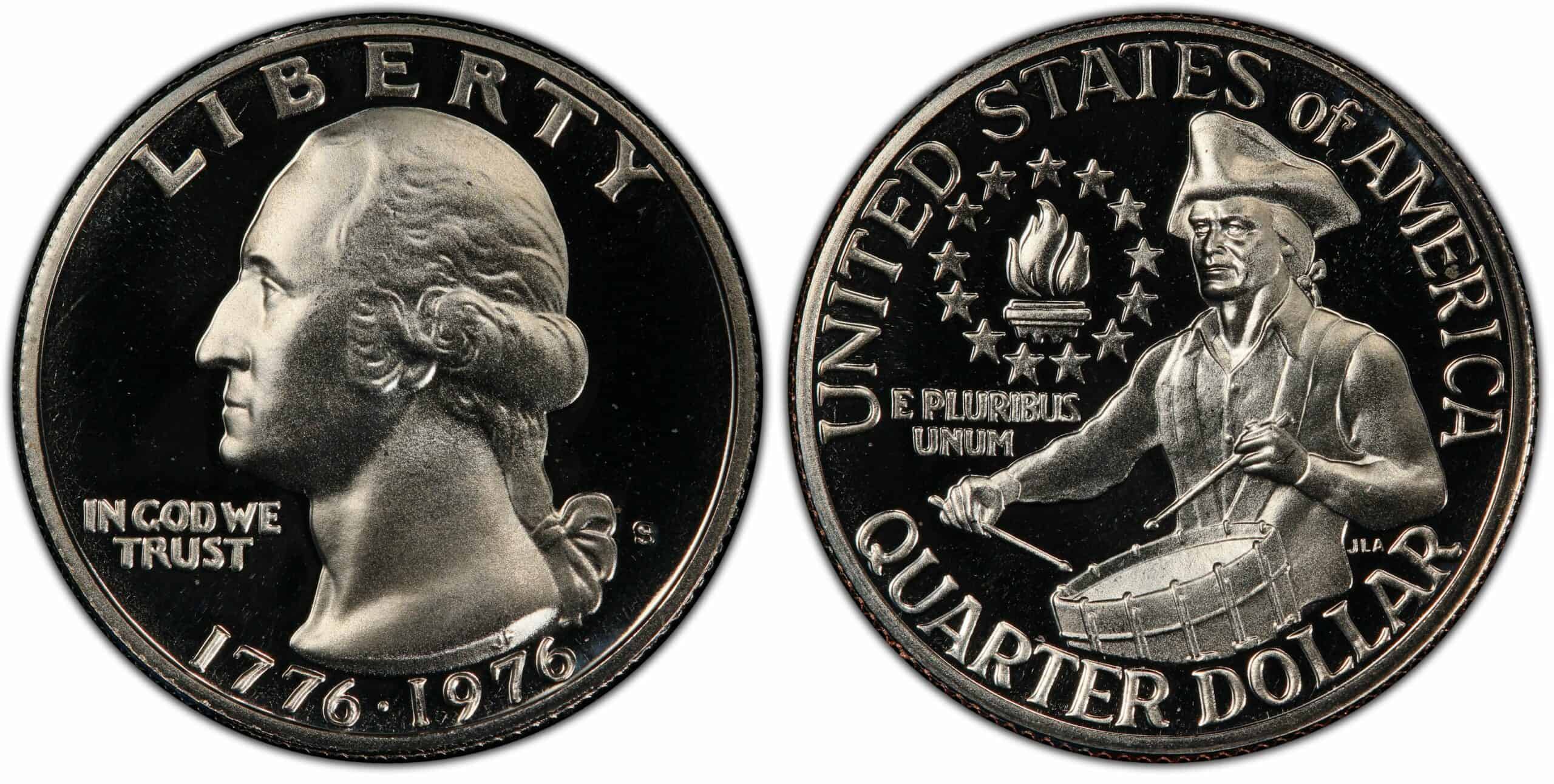 The San Francisco mint struck 7,059,099 proof clad bicentennial Washington quarters in 1976. Depending on the preservation level, you can purchase the most available pieces for $4 to $85.

All three of the most expensive quarters minted this year were sold at auctions. One collector purchased the 1976 S PR 69 clad Washington quarter for $6,038 in 2010 at Bowers & Merena auction.

The 1976 bicentennial Washington quarter is unique in itself, but error coins can be rare and highly collectible nowadays.

Overstruck quarters appeared when a coin die extra pressed an already fully struck coin. Since these specimens are rare and collectors consider them personalized, you can expect that each piece is expensive. For instance, one beautiful piece with this error type was sold at an auction for $12,000.

The 1976 D Washington quarter sometimes has a die cap error on the obverse. It appeared when the planchet came into the press before the previous coin was ejected.

The result is a coin with a sharp obverse impression, while the one on the reverse was softer. One specimen with these characteristics reached $2,880 at a Stack’s Bowers auction.

Coins made with improperly centered dies and struck twice have various doublings on the obverse and reverse. Collectors have recognized several doubled die quarters over the years, and most reach high auction prices. Depending on its condition, you can buy one for $800 to $3,250.

In rare cases, a piece of cloth obstructed the coin surface in the moment of striking so that you can notice a weaving pattern on the obverse. Since such an error makes a quarter valuable and collectible, one of these pieces was unsurprisingly paid $881.25 at an auction.

FAQ about the 1976 Washington quarter

What were Washington quarter types minted in 1976?

Which 1976 Washington quarter is worth a lot of money (according to PCGS)?

How much is the 1976 No Mint mark Washington quarter worth?

Average 1976 Washington quarters in low grade are worth their face value. On the other hand, you should pay $0.35 to $60 for those in the mint state.

What is the rarest 1976 Washington quarter?

Overstruck, coveted, and Doubled Die bicentennial Washington quarter errors are rare and typically pricey coins most collectors want to add to their collections.