The 1975 Lincoln Memorial penny is a modern coin struck in three mints, including San Francisco, that minted only proofs. Interestingly, this coin is the most produced piece in the US coinage.

The first pennies contained wheat stalks on the reverse. However, those minted from 1959 to 2008 came with the Lincoln Memorial on that side, while the obverse stayed unchanged. This series is highly collectible nowadays because of these coins’ historical significance and relatively low 1975 penny value.

History of the 1975 Lincoln Memorial Penny

The first Lincoln penny appeared in circulation in 1909 to commemorate the 100th birth anniversary of the favorite American President, Abraham Lincoln. In his honor, the US Mint changed the previous policy of avoiding using real persons for the coins’ obverse.

The reason was George Washington’s attitude that depicting genuine people on coins sounded too monarchical. As expected, traditionalists found the new decision controversial and initially fought against it.

On the other hand, most Americans were delighted with the new penny design. After that first step, minting historical figures on different American coinage became common.

Fifty years after the US Mint struck the first Lincoln pennies, the reverse was redesigned, and the Lincoln Memorial replaced wheat ears. In 1959, the new design became a way of celebrating Abraham Lincoln’s 150th birth anniversary and 50 years of the Lincoln penny minting.

This new cent type was minted until 2008, when four new coins replaced it. The idea was to honor the different stages of this great man and the 16th US President’s life.

As for the Lincoln Memorial penny, it is technically an outdated series nowadays, but experts estimate that several billion of these coins are still in circulation. The reason is the US laws against copper coins melting and exporting.

However, Americans don’t care about it and still like their unique penny with unusual design rarity. Well, Frank Gasparro designed the new reverse with the central positioned Memorial but added the Lincoln figure between pillars.

That way, this penny became a unique coin with a genuine person in 1909 and a unique piece with the same person on both penny sides in 1959.

Features of the 1975 Lincoln Memorial Penny

The 1975 Lincoln Memorial penny is a standard modern coin of relatively low value. A high mintage makes the entire series cheap, and serious collectors are rarely interested in it. However, these coins are an excellent opportunity for novices to start a new collection with specimens in the highest possible grades.

The obverse of the 1975 Lincoln Memorial penny 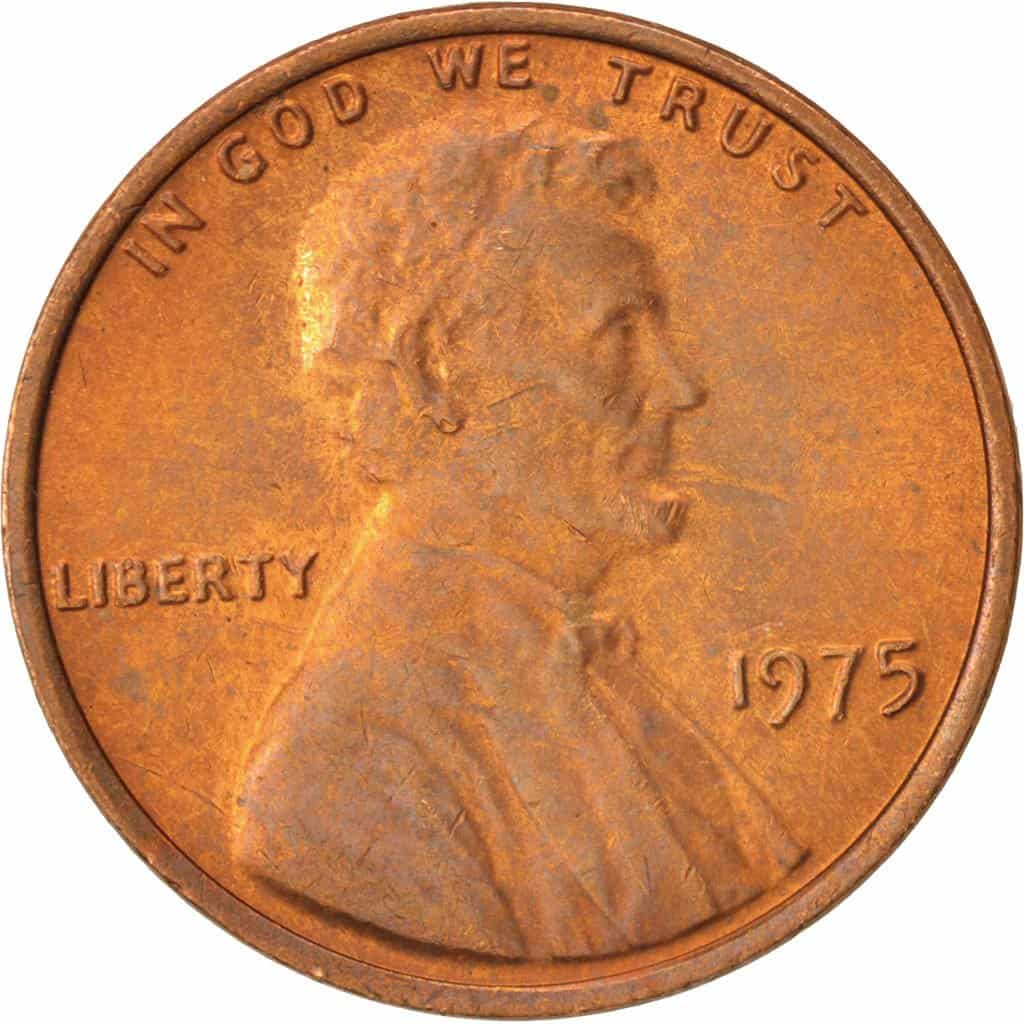 Like other Lincoln Memorial pennies designed by Victor Brenner, those minted in 1975 have the Abraham Lincoln bust on the obverse. Besides the word LIBERTI and the DATE struck on the opposite bust sides, the modest and elegant design includes the inscription IN GOD WE TRUST along the top coin rim.

The reverse of the 1975 Lincoln Memorial penny 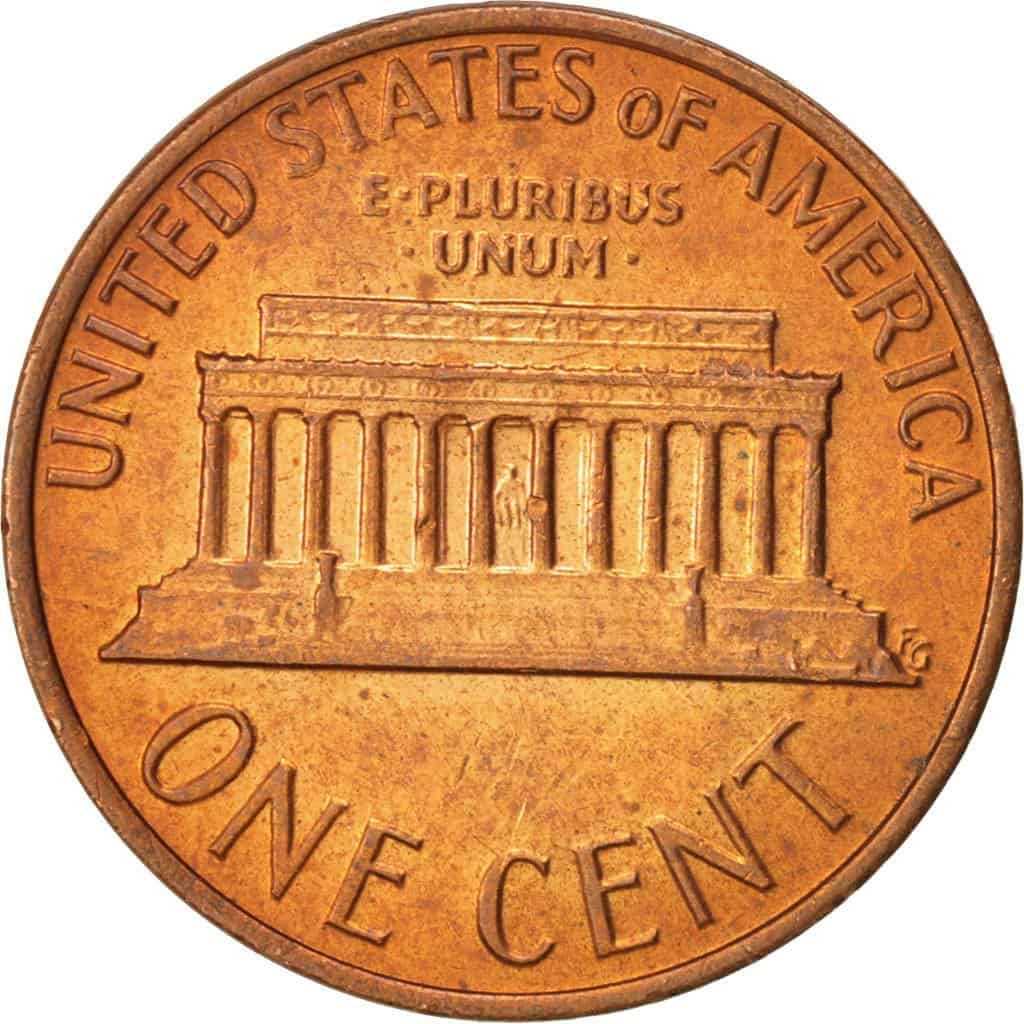 You can see the Lincoln memorial building in the reverse center, designed by Frank Gasparro. It was framed by the name UNITED STATES OF AMERICA and ONE CENT, representing the denomination.

Interestingly, you can spot a small Lincoln figure inside the Memorial, making this coin unique with the same person on both sides. Finally, there is E PLURIBUS UNUM, the required motto struck above the Memorial.

Other features of the 1975 Lincoln Memorial penny

Three mints produced 9,959,566,892 Lincoln Memorial pennies in 1974, but only two coin types were from the regular strike. The San Francisco mint struck only proofs that year, meaning all such coins came with the S mint mark. 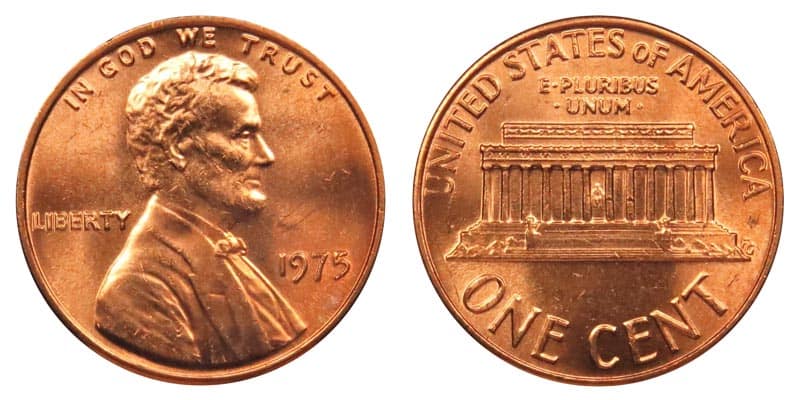 The 1975 Lincoln Memorial penny had a high mintage of 5,451,476,142 pieces from regular strikes produced in Philadelphia. It was noticed that this mint also minted 66 coins with an aluminum pattern, but they were never released to the public.

Lincoln pennies struck this year are abundant on the market, and their prices are typically under a dollar. Only those in the highest grades with desirable red toning can cost more, and you should pay $13 to $65 per piece with a rating over MS 66.

On the other hand, auction records can be surprisingly high. For instance, one collector paid $900 for a beautiful brown coin in 2020, but the one with the red toning reached $9,000 two years before. 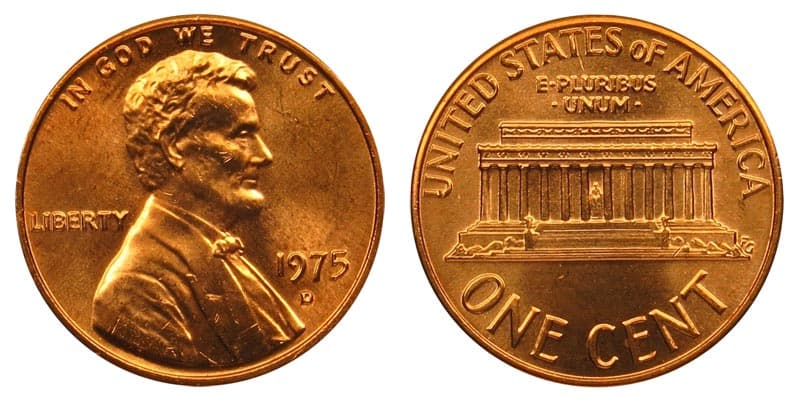 One brown piece was paid almost $500 on eBay in 2022, while you can expect red-colored ones to be more pricey. One collector added such a piece to his collection for $4,113. 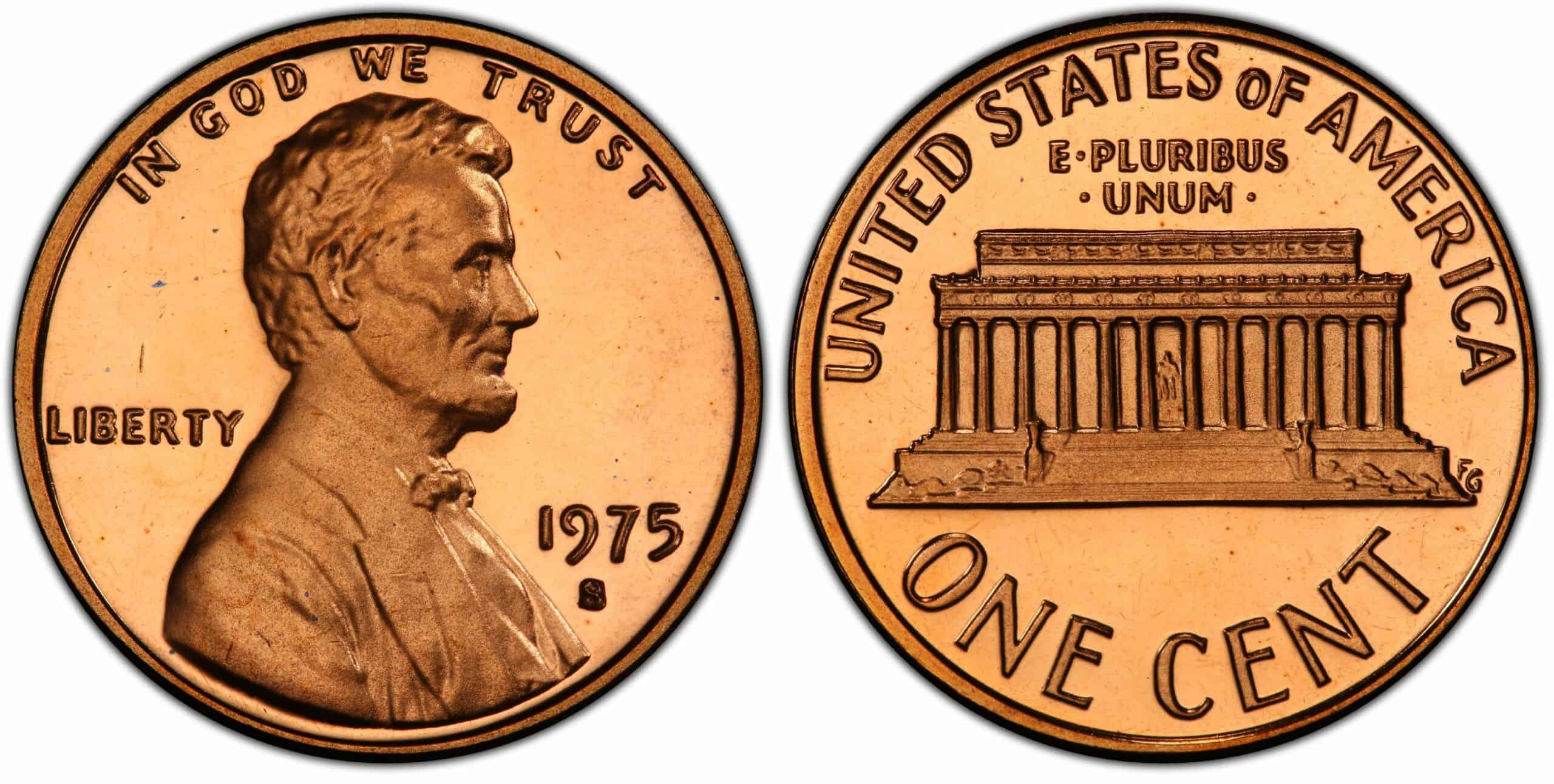 The San Francisco mint didn’t produce regular Lincoln Memorial pennies in 1975, so the entire mintage of 2,845,450 pieces were proof coins. However, such a high mintage resulted in low prices, and you can buy most coins for 20 cents to a max of $8. Only well-preserved coins in a PR 69 grade are worth $25.

The auction records are also modest, and one penny with a cameo contrast changed hands for $95. The only exception was the specimen with deep cameo contrast that reached $1,150 at an auction in 2002.

In 1975, mints produced numerous coins with different errors. Besides a few valuable types, most are common and worth only a few bucks. However, these pennies are always more pricey than regular pieces in the series, so finding one can bring you some unexpected cash.

No one knows how 10-cent or Dime blank planchet appeared in the penny pile, but a 1975 die struck a bunch of coins on it, making a silver-look penny. However, these coins didn’t contain this precious metal but were made of aluminum. You can find them for $200 to $600 on average.

This error appears when the die breaks due to age, and its pieces crack and fall off. As a result, coins struck on such a die come with raised lines or bumps. Collectors like these specimens, and they are prepared to pay $3 to $150, depending on the imperfection’s size, shape, prominence, and location.

The most collectible is specimens with a die cud, a die break variety with flattish bumps on the coin rim. Most coins with such an error cost $100 to $200, but the price can be even higher in some cases.

The BIE error is the most common die break type in the Lincoln penny series. You can notice it in the word LIBERTY as a vertical raised line between the letters B and E, reminding the capital I. You can buy a coin minted in Philadelphia for $5 to $10, while those with the D mint mark are worth $50.

Only the 1975 Lincoln Memorial pennies from Denver come with a capped die error on the obverse, while the reverse is untouched. Lincoln’s image on the obverse is invisible, and the date is barely observable because of the capped die.

An average coin with this imperfection type costs about $50, but the price can be even higher, depending on the error degree.

This unique 1975 D Lincoln Memorial penny error is visible on the coin rim, making it look damaged. Most such pieces are worth $60, but pennies with more than one double strike cost $60. Collectors appreciate coins with errors on different surface parts or even both sides and are prepared to pay more for these rare specimens.

You can’t find significant doubled die errors among the 1975 Lincoln Memorial pennies, but some pieces with minor errors appear on the market from time to time. Most pieces were minted in Denver, but it is possible to find a few among coins struck in the Philadelphia mint.

There is no rule, and DDO and DDR imperfections are equally prevalent and typically cost $25 to $100, depending on the variety. In most cases, the error occurs in the DATE, but it is not mandatory.

This atypical error combines two common imperfections. Such a coin appears after a die strikes a planchet twice, but the second strike is off-center.

This error type is rare since it appears after the planchet folds over on itself before the die strikes the coin.

This fascinating 1975 Lincoln penny error was possible because of hand-punching the mint mark onto a die. The result was different issues, including tilted mint marks and doubling. Such a penny typically costs $3 to $10, but drastic re-punched mint mark variety always brings a premium.

FAQ about the 1975 Lincoln Memorial Penny

Thanks to a total mintage of almost ten billion and a relatively recent minting year, the 1975 Lincoln Memorial pennies are common and inexpensive coins. However, you can find rare and valuable minting errors on the market, including the Silver penny.

Which 1975 Lincoln Memorial penny is worth a lot of money?

How much did the 1975 No Mint mark Lincoln Memorial penny cost?

Since the 1975 Lincoln Memorial pennies are abundant on the market, they are worth less than a dollar. Only red pieces in the highest grades cost $13 to $65. However, one such specimen reached $9,000 at an auction.

What is the most expensive Lincoln Memorial penny?

Undoubtedly the most costly Lincoln Memorial penny is the one minted in Philadelphia in 1999. This cent reached an impressive $138,000 at an auction. As for errors, the 1969 S DDO Lincoln cent won the auction record after one collector purchased it for $126,500.

Have a 1975 no mint mark that has a silver dark tone and I have never seen another penny or coin like it, could someone please tell me how to find out about it and where, it's Double Died obverse also