Although the US Mint intended to issue only a commemorative Washington quarter series in 1932, these coins in a modified form have stayed in circulation to this day. Almost every coin collector currently owns at least a part of this quarter series.

Some Washington quarters are worth much more than others because many factors affect their price. That also applies to the 1974 quarter value that depends on the total mintage, the mint mark, and rare errors. Let’s see.

History of the 1974 Washington Quarter

The history of the Washington quarter begins two years before its first issue. Initially, the US Congress planned to celebrate the 200th anniversary of George Washington’s birth by issuing a half-dollar and a medal.

Then, they announced a competition to replace the previous Standing Liberty quarter, and sculptor Laura Gardin Fraser‘s design won. However, the decision was changed, probably because the winner was a woman. The US Mint organized the second round to get the desirable look of the new US quarter.

Sculptor John Flanagan won this time with his design featuring the President’s bust on the obverse. The reverse was in an American style with a heraldic bald eagle in the center.

Initially, the idea was to make the Washington quarter a one-year issue. However, the public accepted this coin well, and the production continued.

Up to 1965, the Washington quarter contained 90% silver and 10% copper. However, the 1974 quarter has a so-called cupro-nickel composition, which means it contains a copper core and a layer made of a copper and nickel combination.

Features of the 1974 Washington Quarter

Three mints produced the 1974 Washington quarters, with a total mintage of 1,157,228,868 pieces. That means they are pretty available and easy to obtain on the current coin market. All share the same design, with the mint mark or lack of it as the only detail you can use to distinguish them.

The obverse of the 1974 Washington quarter 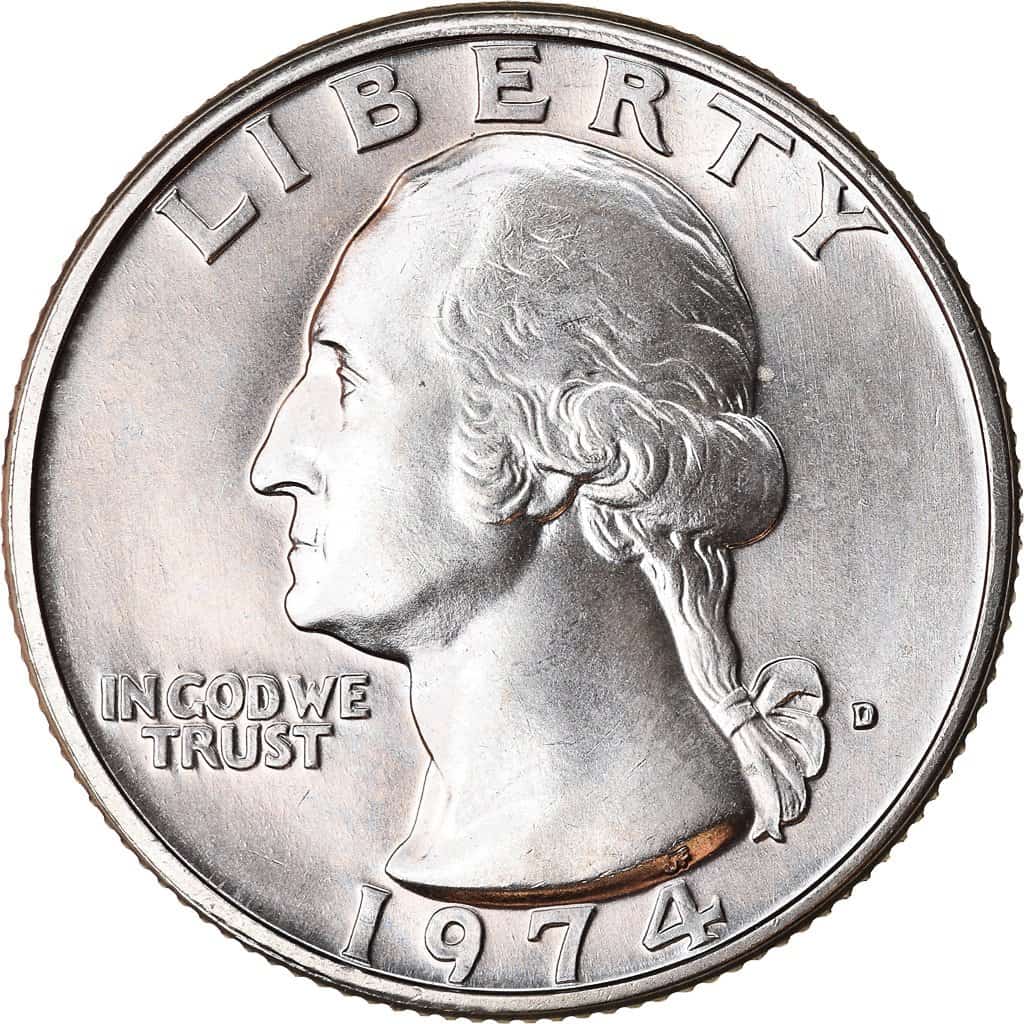 The sculptor John Flanagan designed the 1974 Washington quarter with the first American President on the obverse. A sculptor made his portrait based on Jean-Antoine Houdon’s model from 1785.

The President’s profile is in the coin center, and you can read IN GOD WE TRUST in front of him. There is also the word LIBERTY above his head, while the issue date is below the bust.

If you observe the coin closely, you can see the initials JF on the line of the President’s neck, just above the number 4 in the date. Coins made in Denver and San Francisco also have the mint mark on the right side of the coin. You can notice it behind the ribbons in the President’s hair.

The reverse of the 1974 Washington quarter 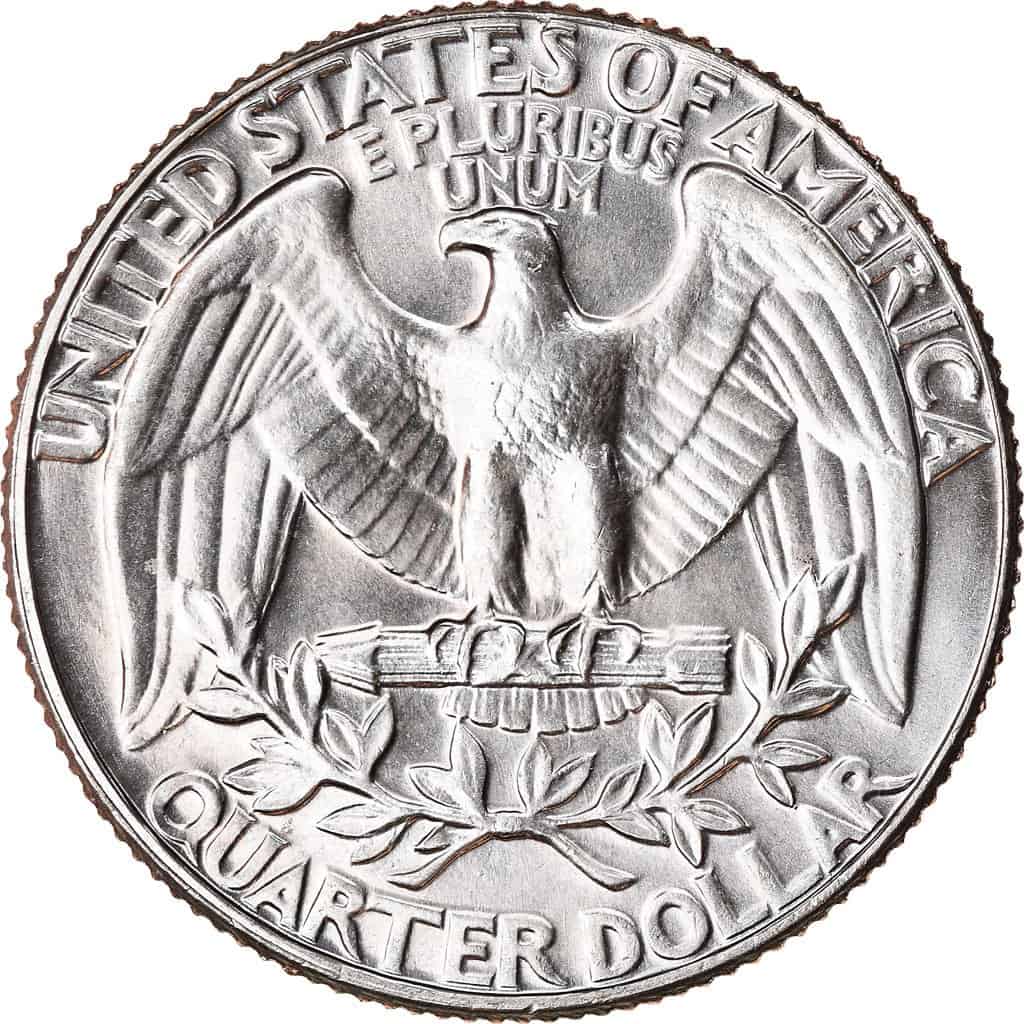 The Washington quarter’s reverse is rich in detail. The crucial motif is the bold eagle, the national bird of the United States since 1782. Its wings are widespread, and you can see a bunch of arrows in its talons, symbols of war.

Two olive branches are located below the arrows as a symbol of peace. The mandatory QUARTER DOLLAR denomination is at the coin bottom, below these branches.

This coin also features the engravings UNITED STATES OF AMERICA on top and the traditional US slogan E PLURIBUS UNUM. This Latin saying symbolizes the unity of all US states.

Other features of the 1974 Washington quarter

The 1974 Washington quarter’s metal compound is complex and consists of two parts. The coin core contains pure copper covered with an alloy of 75% copper and 25% nickel.

The initial US Mint idea was to issue a Washington half-dollar, but the final decision was a coin with a $0.25 face value. It has the traditional round shape while its edge is reeded with a total of 119 reeds.

Three mints produced 1974 Washington quarters. Aside from the mint mark, these coins vary in their value. No-mint mint mark quarters are the most common, while the proof coins have the highest price. 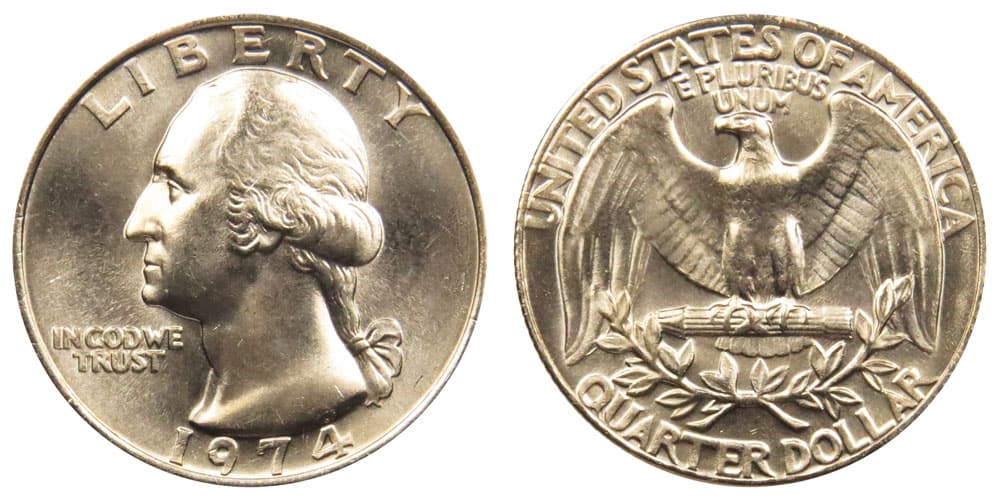 The Philadelphia mint struck most of the 1974 Washington quarters, 801,456,000 total. All coins went into circulation, meaning people regularly used them in everyday financial transactions. None of the Philadelphia-made 1974 quarters have the struck mint mark.

Unfortunately, minting in bulk resulted in this coin being common and generally worth only slightly more than its face value. The only exception is high-quality coins that are typically worth a few dollars.

For instance, the 1974 Washington quarter produced in Philadelphia in an MS 65 grade costs about $5. On the other hand, several other pieces can bring you a decent amount of money.

Finding a well-preserved piece in the mint state can bring you over a thousand dollars at auctions. The 1974 MS 67+ Washington quarter sold for $2,115 at Legend Rare Coin Auctions in 2020 is the most expensive in the series.

The Denver mint issued significantly fewer Washington quarters than the Philadelphia mint in 1974, only 353,160,300. As I have already mentioned, you can confirm the mint by finding the D letter on the obverse, right of the President’s bust.

As expected, the result of lower mintage is the coins’ higher value. An average 1974 D quarter in an MS 65 grade is typically worth about $9, twice as much as the same grade piece without the mint mark.

All these coins went into circulation, so those worn out by hand-to-hand transactions are not worth much. That also means they are available and easily affordable, even for novice collectors.

However, top-notch coins can fetch high prices, including the record value of this coin of $1,450. One collector set aside that sum for the 1974 D MS 67+ Washington quarter in 2021. 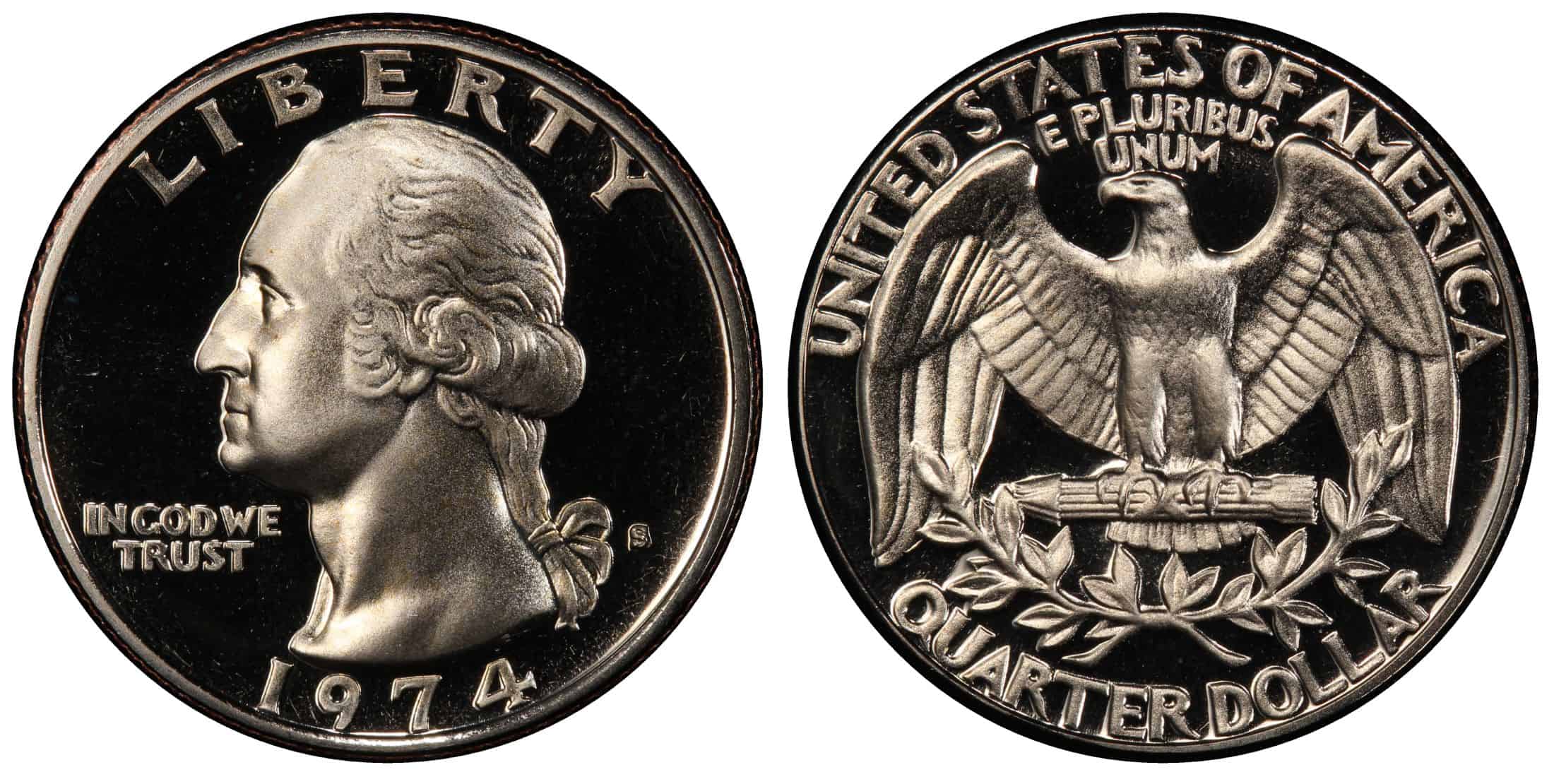 The San Francisco mint’s share of the 1974 quarter production is pretty low, with only 2,612,568 minted coins. Be aware that these pieces are proof coins that can be very valuable and sought after among collectors.

Since these proofs were never in circulation, all were in an uncirculated condition and well-preserved. They were typically highly polished and struck multiple times, so all the finest details and lines in the design were clear and sharp.

The 1974 S Washington quarters were primarily struck for collectors and presentations. Therefore, you can often find 1974 S quarters with a cameo or deep cameo contrast.

These exclusive coins are deeply polished and highly reflective, and you can sell them for much more than pieces from a regular strike.

The proof coins with a cameo contrast have a mirror-like luster, while the design details, like letters and bust, appear milky and white. They are not reflective, and you can clearly distinguish them from the rest of the coin.

In the case of the DCAM quarters, it goes one step further. At first glance, it may even look black and white due to the high contrast between the field and design. Some collectors describe the pronounced white details on the deep cameo coin as frosty and creamy.

Both coin types are scarce and worth a lot because their way of production is unique. It is no coincidence that the most valuable 1974 S PR 70 DCAM Washington quarter was sold for $10,925 at an auction in 2009.

The 1974 Washington quarter had a high mintage, and over a billion coins were produced. That means you can occasionally run into an error quarter and sell it for a much higher price than the regular coin.

Some die cracks and chips are expected, but there are several error quarters that you should keep an eye on. 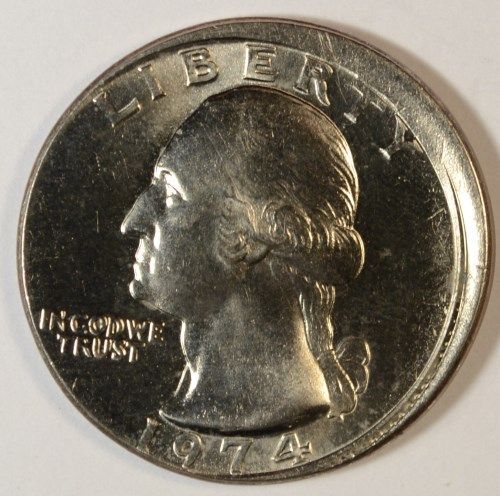 Although finding a 1974 off-center Washington quarter can be challenging, some pieces appear on the market from time to time. You can find it on Etsy or eBay for $20 to $50. 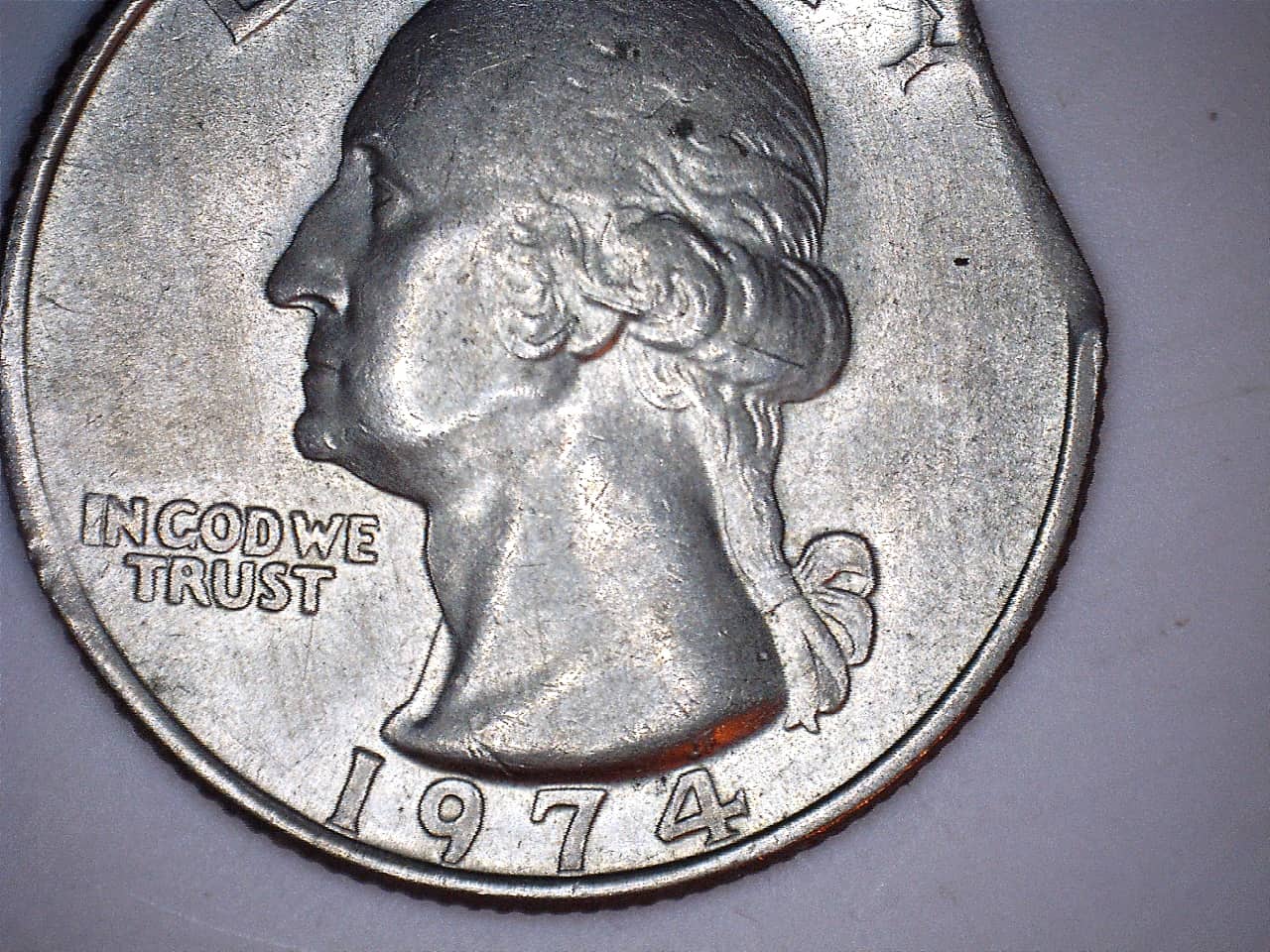 The 1974 Washington quarter with the clipper planchet error looks broken and like it is missing a part. That happens when the metal sheet imprecisely strikes a blank metal during the minting. The more clipped coin is the higher its value.

You can commonly find this error among coins struck in the Philadelphia mint. Most of these quarters cost about $14 on eBay.

Interestingly, it is impossible to find Washington quarters minted in 1975. In 1974, all three US mints made preparations for the 1976 Bicentennial quarter production, plus they struck 1974 quarters parallel with preparing new coins.

Since pieces with the 1776-1976 date minted in the San Francisco mint contained 40% silver, many collectors believe there are 1974 silver Washington quarters. They point out that some silver planchets were probably used for the 1974 coins by mistake. Supposedly, the price of such a coin would be several thousand dollars.

However, the fact is that an allegedly 1974 silver quarter is selling on eBay for just $125. Keep in mind that the existence of this error quarter is down to speculation. Also, its desirability creates an opportunity for fraudsters and counterfeit.

FAQ about the 1974 Washington Quarter

What makes a 1974 Washington quarter rare?

In general, the 1974 Washington quarter is not a scarce coin. You can quickly obtain it in good condition for a little over its face value. That said, mint state pieces are rare and desirable among collectors.

Which 1974 Washington quarter is worth a lot of money?

How much is the 1974 No Mint mark Washington quarter worth?

The Philadelphia mint produced over 800 million quarters without the mint mark in 1974. Most of these coins are not worth much, and you can buy those in an MS 65 grade for about five dollars.

The rule of thumb is that the higher the coin quality, the more it is worth. For instance, one collector paid $2,115 for the 1974 Washington quarter in 2020, making it the most expensive in the series.

What is the rarest 1974 Washington quarter?

All 1974 proof quarters are considered scarce and valuable, but those with deep cameo contrast are the hardest to obtain. The auction record holds the 1974 S PR 70 DCAM Washington quarter. One collector paid an enormous $10,925 for it at an auction in 2009.