The US Mint produced Eisenhower dollars from 1971 to 1978. It was the same in 1974, but only the mint in San Francisco minted silver coins. You can recognize two types of specimens made of silver struck that year, those from regular strikes and proofs.

As expected, the 1974 silver dollar value depends on the coin type. However, you shouldn’t count on high prices since these pieces contain only 40% of precious metal. On the other hand, each silver dollar is worth something, regardless of the condition.

History of the 1974 Eisenhower Dollar

The US Mint stopped producing silver dollar coins in 1935, and most disappeared from circulation by 1964. Even though the new law allowed the mint in Denver to produce Peace dollars, none of these pieces were released to circulation.

The ongoing silver shortage caused approving the Coinage Act of 1965, which made it possible to remove silver from American coinage entirely. President Johnson approved it in July 1965. The US Mint produced only clad half dollars, quarters, and dimes from that moment.

However, President Nixon allowed the Eisenhower dollars’ minting in 1970 by signing the corresponding law. Interestingly, the same law authorized the sale of 2.8 million Morgan dollars produced in the Carson City mint and stored in vaults by that moment.

When the US Mint produced the first Ike silver dollars in 1971, they became the first circulating dollar coins with one American President’s portrait on the obverse. Plus, these dollars were the first ones struck in silver after 1935.

Features of the 1974 Eisenhower Dollar

The obverse of the 1974 Eisenhower dollar 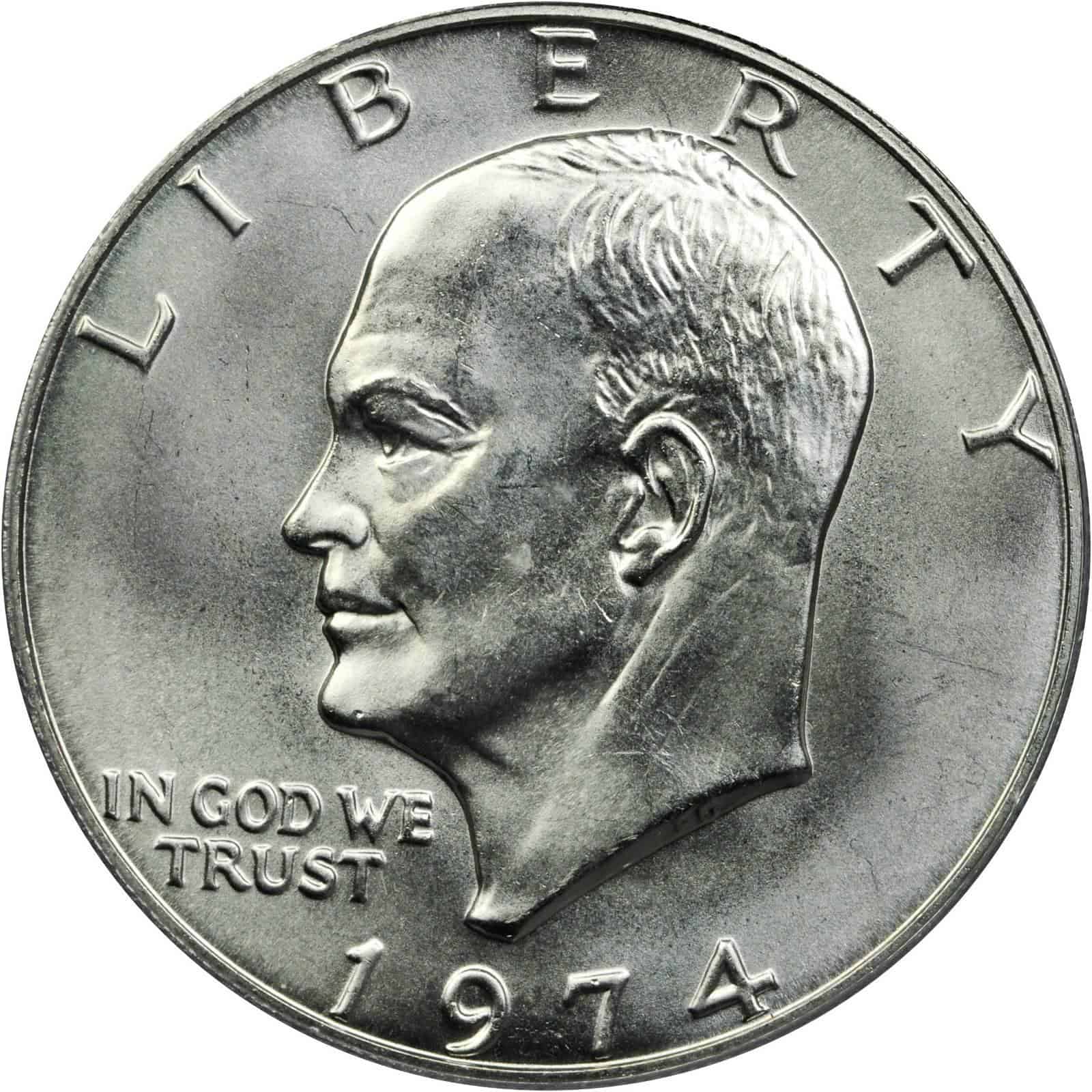 Chief Engraver Frank Gasparro designed the 1974 Eisenhower dollar obverse with the 34th American President on the obverse. The simple coin look includes the minting date, 1974, and the word LIBERTY around the centrally positioned portrait.

The required motto, IN GOD WE TRUST, written in smaller letters, is placed on the left. You can also notice the mint mark S below the bust in all pieces minted in San Francisco.

The reverse of the 1974 Eisenhower dollar 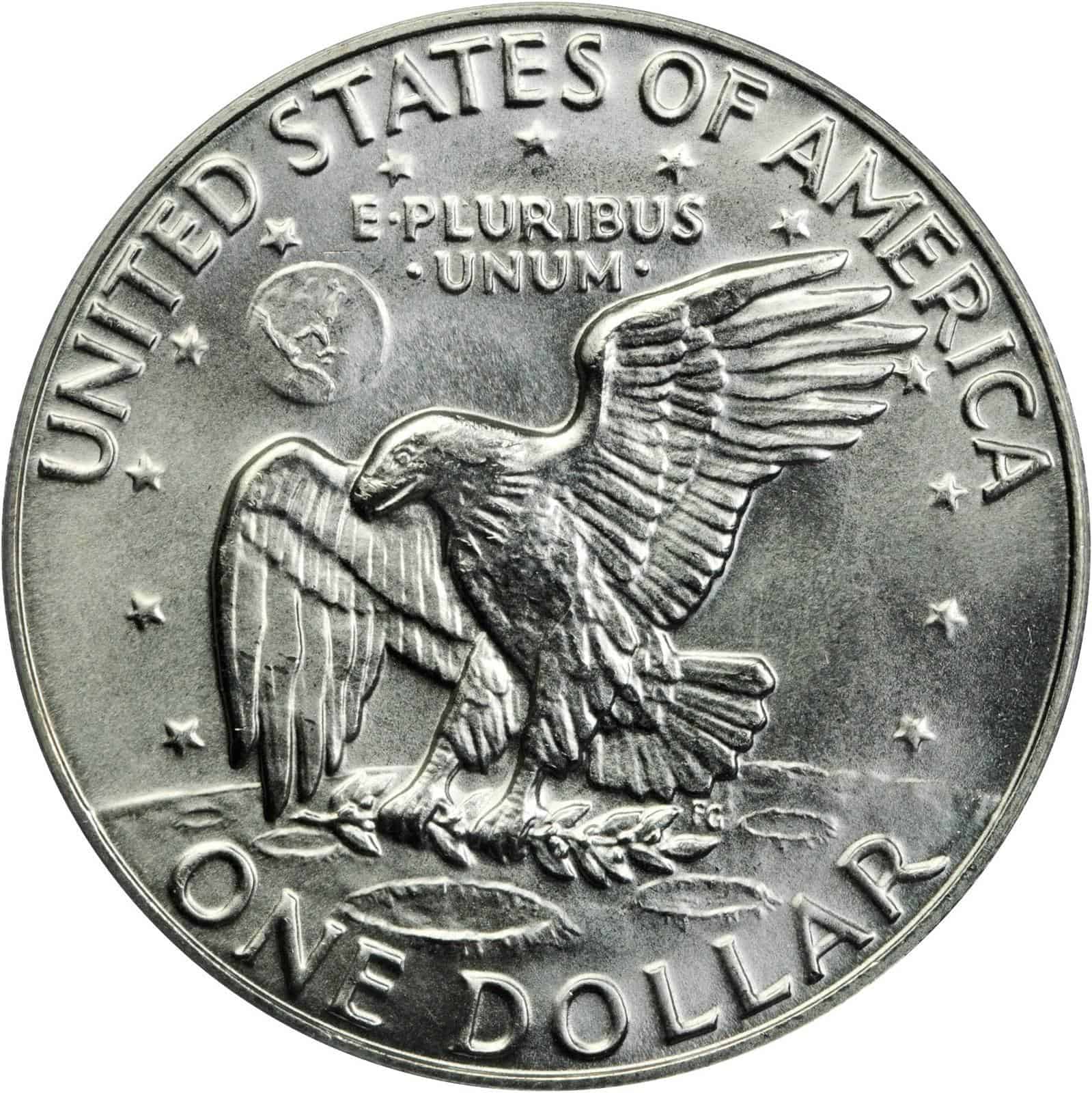 The 1974 Eisenhower dollar reverse should have honored the first Apollo 11 landing on the Moon. You can see an American bald eagle with olive branches in its talons flying right above the crater-pocked surface of the Earth’s satellite.

Above its head are the Earth and the inscription E PLURIBUS UNUM, while the thirteen stars surround the composition. The legend UNITED STATES OF AMERICA and denomination struck along the edge frame the entire design.

Other features of the 1974 Eisenhower dollar

As expected, silver dollars struck in the San Francisco mint are more collectible than the clad ones produced in the other two mints. You can notice two coin types made of precious metal, including those from regular strike and proof coins.

The quickest way to determine silver dollars from those made of copper is to find the mint mark on the obverse. Another step is to check the coin edge for a copper stripe presence. Only specimens without that copper line are made of pure precious metal, while you can see it on clad pieces. 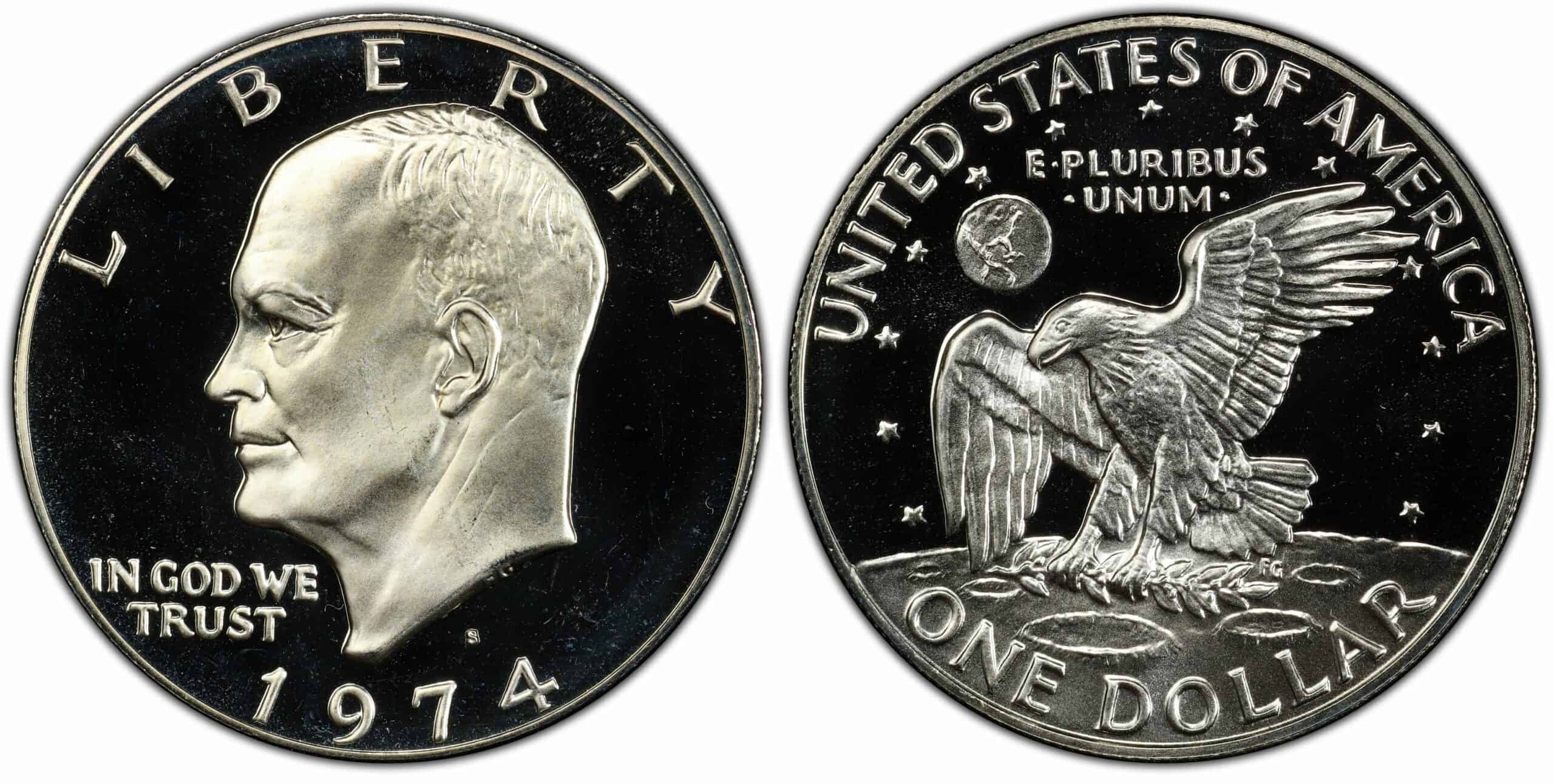 Unlike the 1974 clad Eisenhower dollar proof coins worth $4 to $13, those made of silver with beautiful deep cameo contrast typically cost $10 to $20. Collectors will pay about $500 only for top-rated specimens with a PR 70 rating.

Be prepared that those coins often reach high prices at auction, like the 1974 S GEM proof Eisenhower silver dollar. One collector paid $2,300 in 2001 to add this beautiful piece to his collection.

The undoubtedly most expensive proof silver dollar struck this year is the one with impressive deep cameo contrast. It won the auction record of $4,600 at Heritage Auctions in 2007. 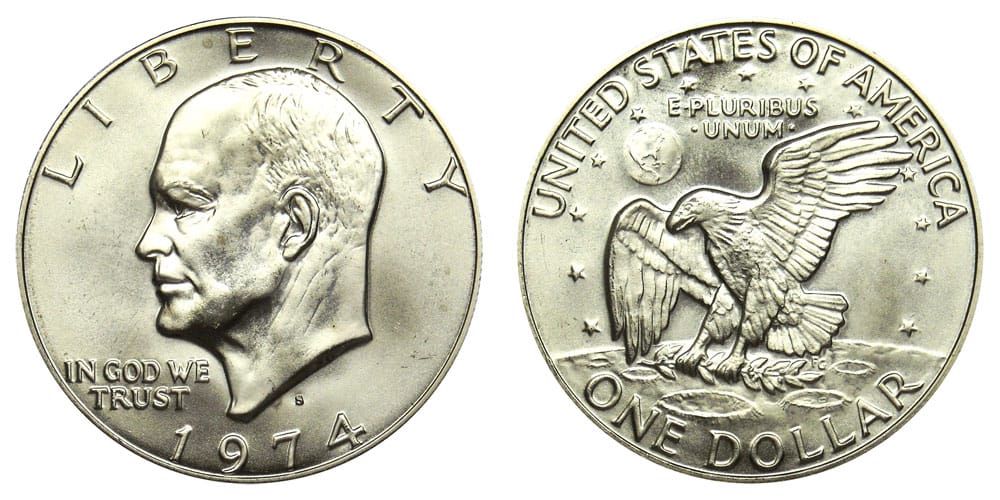 Their value is approximately $4 to $13 on the coin market. One thing is quite weird when it comes to these coins. Unlike silver pieces in perfect condition worth about $500, those with clad composition and in the same highest grade can reach $5,000. 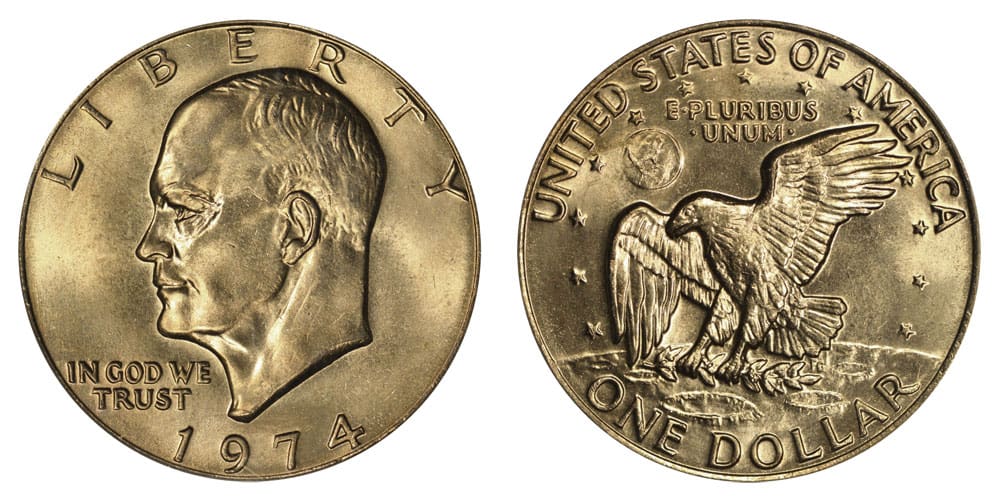 Interestingly, such pieces can be expensive once you find them at an auction. For instance, the 1974 MS 67 Eisenhower dollar reached an incredible price of $6,600 in 2021.

Even though the 1974 Ike silver dollars always cost more than their face value, errors are even more valuable. Remember that it refers only to pieces made of precious metal, while those with clad composition are not in a group of silver dollar errors.

As I have already mentioned, silver Ike dollars were minted only in the San Francisco mint. No one knows how 25 to 30 pieces were struck on the silver planchet mistakenly brought to the Denver mint.

These error coins were made with a regular die intended for clad dollars, but the planchet was wrong. One Las Vegas blackjack dealer discovered the first such a proof-like dollar. The coin was beautiful and with a unique peripheral golden-brown patina.

All found pieces with this error type are expensive, and collectors often set aside about $8,000 to get one.

This rare error appears on the 1974 Ike silver dollar edge. Such pieces come without reeds and raised rims and are typically wider than regular ones. An average broad-strike error specimen made of silver is often worth about $700.

The double-die Ike silver dollars are quite rare coins, and their price depends on how prominent that doubling is. Close checking at doubling in the lettering, date, Moon craters, and President’s eye can often pay off. These coins usually cost $100 to $500, depending on how dramatic the imperfection is.

Off-center coins are always collectible, but their price depends on the error percentage. Most collectors appreciate only pieces with at least 50% off-center design, and you can expect to find those dollars for $500 to $2,000 at the coin market.

FAQ about the 1974 Eisenhower Dollar

The rarest coins in this series are those struck in Denver on a regular die intended for clad dollars but on the 40% silver planchet. Since only 25 to 30 such coins were made, you can expect them to be costly. In most cases, their price is approximately $8,000.

Which 1974 Eisenhower silver dollar is worth a lot of money?

Interestingly, a few Eisenhower dollars without the silver content reached pretty impressive prices at auctions. In fact, the one minted in Denver is the most expensive coin in the series.

How much is the 1974 S Eisenhower silver dollar worth?

If you have an unlimited budget, you can consider one of the rare and collectible pieces with an MS 69 rating worth approximately $5,500 to $7,000. The most expensive silver coin produced that year was the 1974 S MS 68+ Ike dollar. One collector purchased it for an impressive $13,513.

What is the most pricey Eisenhower silver dollar?

The most pricey Eisenhower dollar is the one minted in the San Francisco mint in 1973. This silver-proof coin was sold for $40,250 at Heritage Auctions in 2008.