1972 was the second year in which the coins known as “Eisenhower dollars” were minted. They were large, heavy coins, quite unlike the modern dollar. And while most of them aren’t especially valuable today, a few are highly prized by collectors.

So what’s the difference between them? We’re going to explore the 1972 silver dollar value. And we’ll find out how to tell if your coin is worth big money.

History of the 1972 Silver Dollar

1971 saw the launch of a new silver dollar. It was known as the Eisenhower, or Ike, dollar after the portrait of the former president which appeared on one side.

The new coin was a return to the larger, heavier silver dollars that had last been issued in the 1930s. And it was the result of an unlikely combination of lobbysists: the gambling industry, and Eisenhower supporters.

For many years, American casinos had been using tokens in the place of dollar coins. But gamblers preferred to use the real thing, and the supply of large silver dollars was dwindling.

Legislation introduced in response to rising silver prices had forbidden the use of the metal in coins until 1970. But as that date grew closer, the calls for a new silver dollar became louder.

Eisenhower’s death in March 1969 led to calls for the former leader to be commemorated with a coin. A new silver dollar, honoring Eisenhower, would kill two birds with one stone.

Silver, however, was still expensive. A real silver dollar would be costly to produce. So a compromise was struck. The new Eisenhower dollars would be made of base metal and colored silver with a coating of copper and nickel.

But for collectors, a smaller number of silver-clad coins would be produced. These would have a copper core, but a silver coating that would make them 40 per cent silver overall.

The silver-clad coins were minted in San Francisco from 1971 to 1974. Proof coins were presented in brown wooden boxes, while mint state coins were in blue envelopes. These coins are known as “brown Ikes” and “blue Ikes” to this day.

In 1972, the series was still young, and the year saw a variety of different coins being produced. Standard coins for circulation were struck in the Philadelphia and Denver mints. And both mint state and proof silver-clad coins were minted in San Francisco.

But as time went by, it became clear that the new coins weren’t popular outside casinos. They were too cumbersome for everyday use. In 1979, the Eisenhower dollar was replaced by the smaller, lighter Susan B. Anthony dollar.

Features of the 1972 Silver Dollar

The Obverse of the 1972 Silver Dollar 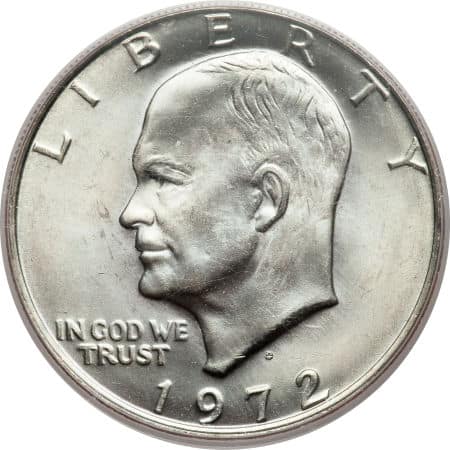 The obverse – the “heads” side – of all Eisenhower dollars carry the former president’s portrait. It was based on a sketch by the Mint’s chief engraver, Frank Gasparro, completed in 1945. Gasparro had caught a glimpse of Eisenhower at a VE Day rally, and had taken his likeness on the spot.

The obverse also carries a mint mark – if one is present. Coins minted in Philadelphia don’t have a mint mark. But a “D” on the coin signifies it was minted in Denver, and an “S” means it came from San Francisco.

The mint marks were applied by hand using a punch and a mallet. Look for the letter above the third or fourth digits of the date, which appears at the bottom of the obverse.

Also on this side of the coin is the word “Liberty” and the motto, “In God we trust”.

There are three different types of 1972 dollar. Most of the differences between them are visible on the reverse. But there are some variations in the obverse too.

The variety known as Type 3 features stronger furrows on Eisenhower’s neck and crisper detail on his hair. And the “R” in “Liberty” lacks the serif on the bottom left of the letter, giving rise to the term “Peg Leg”.

The Reverse of the 1972 Silver Dollar 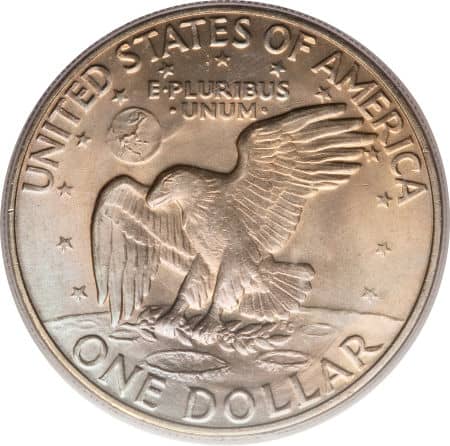 Gasparro also crafted the image for the reverse of the 1972 silver dollar, but based it on an existing design. The image of an eagle landing on the moon came from a patch designed by the astronaut Michael D. Collins and others. It had been created to mark the successful Apollo 11 mission.

The eagle holds an olive branch clutched in its talons, symbolizing its peaceful intent. And in the background, above its head, floats a tiny planet Earth.

The image is ringed with stars, with “United States of America” above and “One dollar” below. Also present is the Latin motto, “E pluribus unum”. This means “From the many, one”, and refers to the union of the states.

At first glance, the reverse of the 1972 silver dollar looks the same on every coin. But look more closely at the depiction of the planet Earth, and you’ll see some subtle differences.

Type 1 coins show the planet in low relief, looking slightly flattened. And the Caribbean islands are raised above the coin surface.

Type 2 coins resulted from a die that should have been used for the silver proofs in San Francisco wrongly being sent to Philadelphia. In these coins the earth is round, Florida points due south, and the Caribbean islands are impressed into the coin surface.

Type 3 coins were struck from half-way through 1972, using new technology. And here the impressed islands are replaced with a clearly defined island cluster.

This YouTube video from Coin Week walks you through the differences between the three types.

Other Features of the 1972 Silver Dollar

The 1972 silver dollar – in common with all the Eisenhower dollars – has what’s known as a “reeded edge”.

Turn it on its side and you’ll see a series of grooves running perpendicular to the surface of the coin. The design was first used back in the 1780s to prevent “coin clipping”. This was when unscrupulous traders would slice small pieces of gold or silver off the edges of coins. 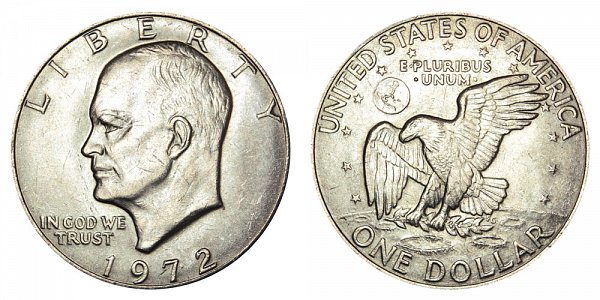 Almost 48 million 1972 dollars were minted in Philadelphia and designed for regular circulation. Many of these are the Type 1 variety. So finding a coin with a weak image of the Earth doesn’t necessarily mean it’s valuable. Most are worth little more than their face value.

But find an uncirculated coin in excellent condition, and that changes. The highest quality 1972 Type 1 silver dollars known to exist are graded MS (mint state) 66 out of a possible 70. Only four of them have been found to date. And if you find one, it’s worth a lot of money. 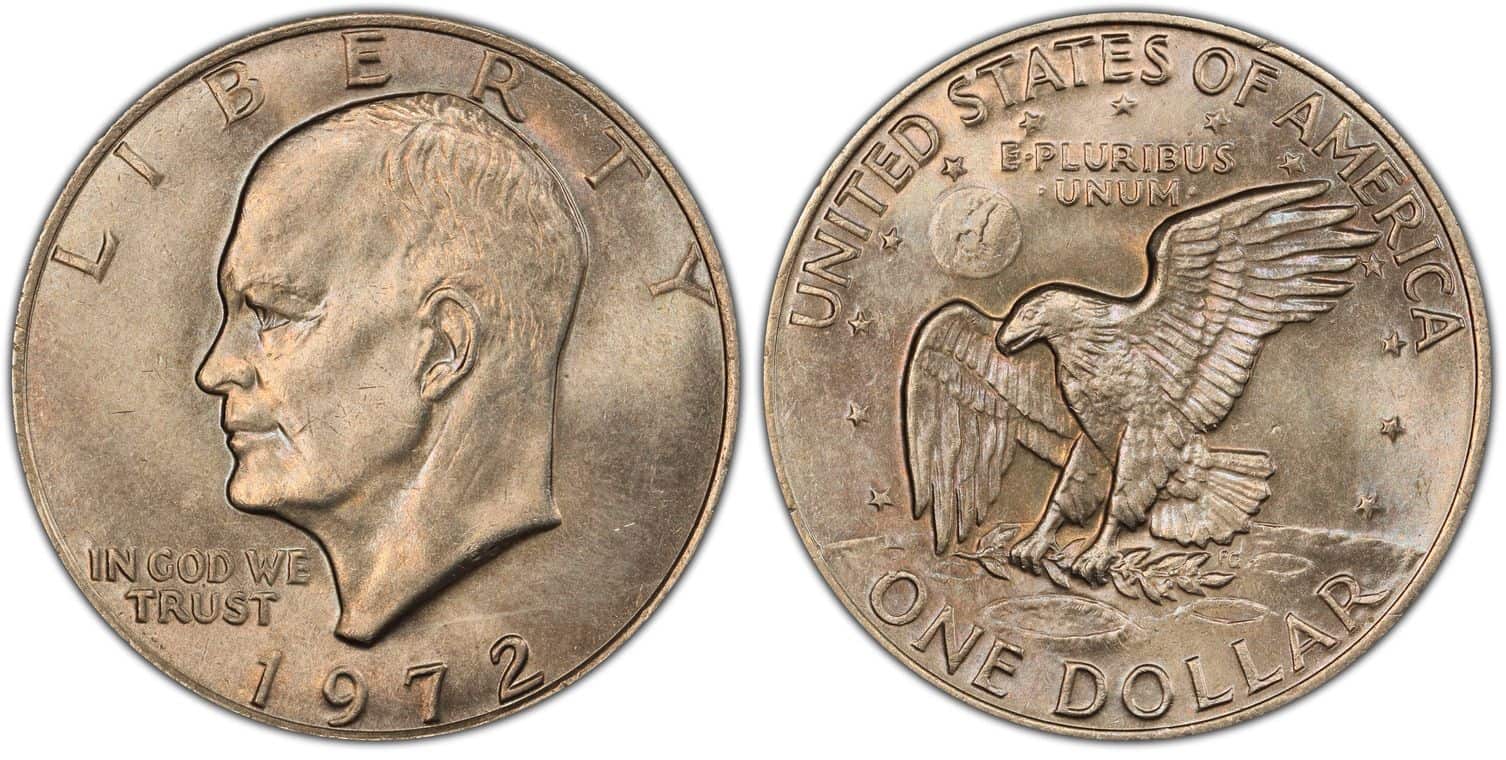 The Type 2 coins are considerably rarer. They were struck in Philadelphia from dies that were supposed to have been used for the silver-clad dollar coins in San Francisco.

So if you find one of these in any condition, it will be worth much more than a dollar. A standard circulated coin will sell today for about $30.

Find one of the finest quality, however, and prices increase dramatically. A coin graded MS63 can fetch anything between $75 and $150. Go up a couple of points to MS65, and it will fetch about $1,000.

The finest examples known to exist are graded MS66. The PGCS has graded nine coins at this level, and the NGC two. Prices fluctuate over time, but the auction record was set in August 2022 when a Type 2 1972 dollar graded MS66 crossed the block for $14,400.

It’s a similar story for Type 3 silver dollars. The Type 3 began to be produced roughly half way through the year. But there are still plenty of them to be found. And in circulated grades, they can be bought for little more than their face value.

But if you want to get your hands on one of the finest examples, it will cost you considerably more. The highest graded Type 3 coin known to exist is one graded MS66+ by the PCGS. That one sold at auction in July 2022 for $5,880, a new record for a Type 3. 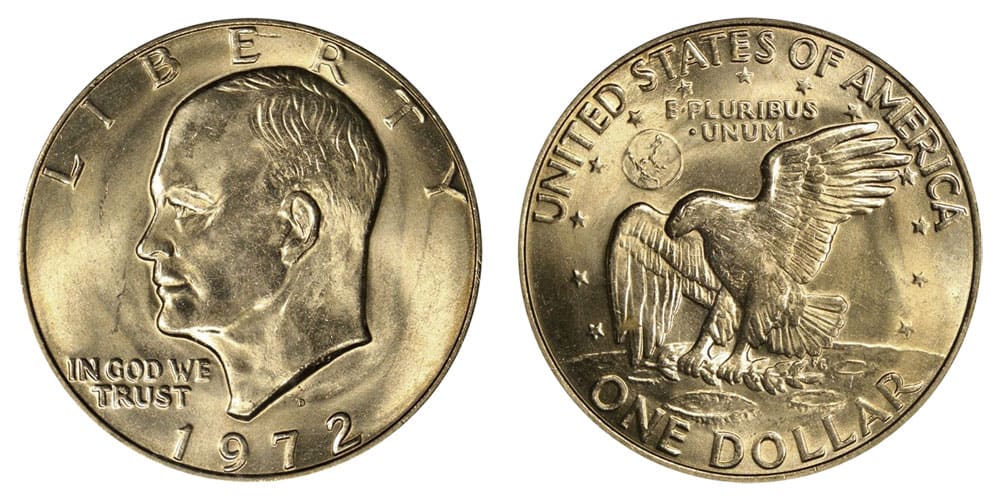 Like Philadelphia dollars, those minted in Denver aren’t worth much more than their face value in circulated grades.

Go up a few grade points, though, and the coins become rarer and more valuable. Coins graded MS66 can sell for anything between $50 and $550.

That’s still pretty good value in comparison to Philadelphia dollars at the same grade. But that’s because the Denver dollar is available at a higher grade, MS67. And if you want an MS67 example, it will cost you between $1,500 and $9,800.

Two different types of silver-clad dollars were minted in 1972, both in San Francisco. There were mint state coins, never intended for circulation. And there were proofs, struck with special dies on the highest quality polished planchets.

You might expect these coins to be the most valuable 1972 silver dollars of all. But in fact, that’s not the case.

Although minted in smaller numbers than coins for circulation, the numbers produced were still far from modest. Just under 2.2 million uncirculated “blue Ikes” were struck, and just over $1.8 million “brown Ikes”, the proofs.

Because the coins were destined for collectors, they were stored carefully. So finding good quality examples today isn’t difficult – and prices remain conservative as a result. 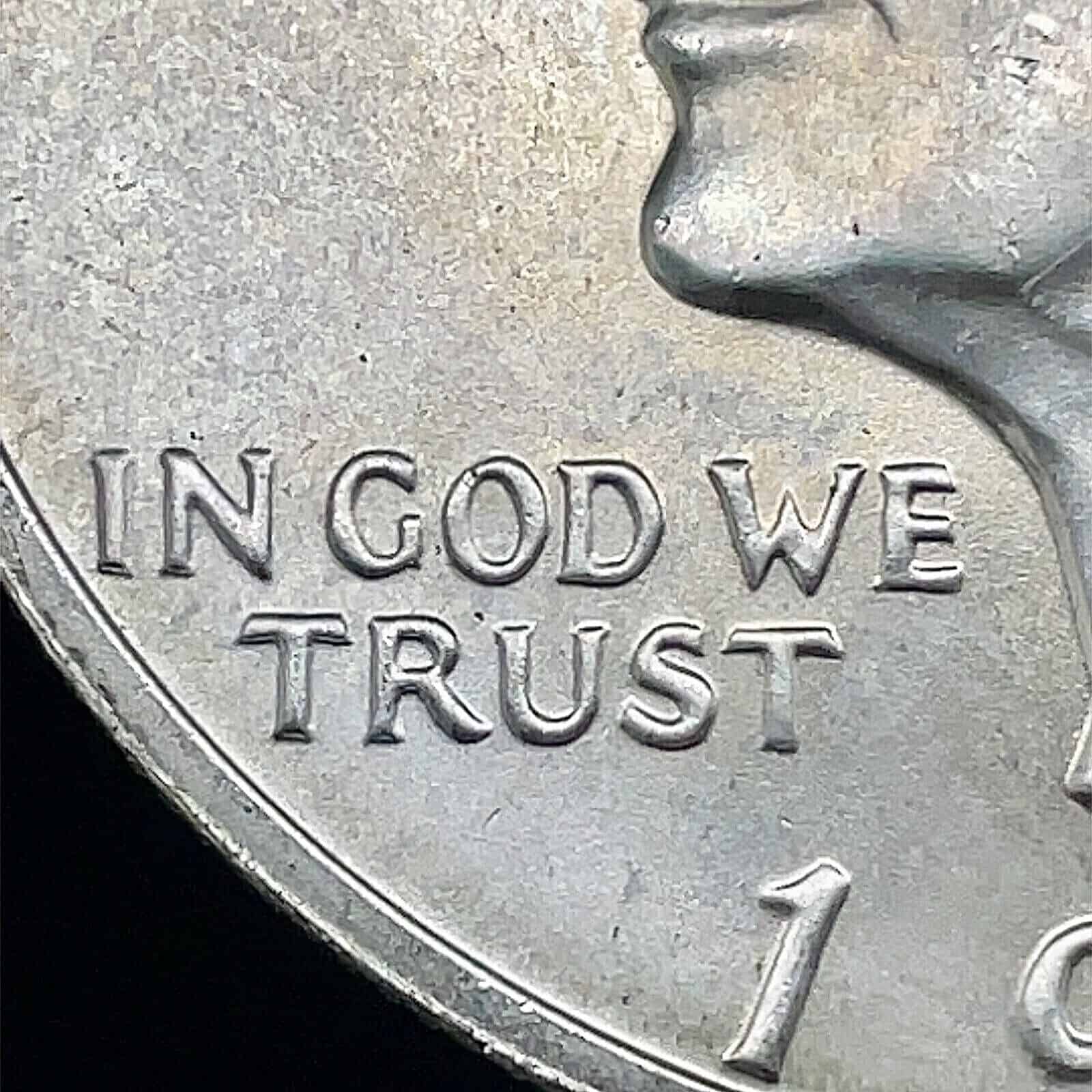 A double die error is one of the more common error types. It occurs when the planchet moves slightly between strikes of the die, producing a doubled image.

The value of double die errors depends on both how marked the error is, and the quality of the coin. Sometimes errors will be visible on both sides of the coin, sometimes on only one.

Sometimes a planchet is clipped during the minting process. A sliver of metal is cut off, giving the coin an unusual shape.

Prices seem to have appreciated since then. At the time of writing, a coin with a more minor clip was being offered for sale at $100.

What makes a 1972 silver dollar rare?

Most 1972 silver dollars aren’t rare. But base metal coins graded mint state 66 and above certainly are.

And even circulated coins of the Type 2 variety are uncommon. Look closely at the Earth on the obverse to identify which type of Philadelphia coin you have. If the Caribbean islands are incised on the surface instead of raised above it, you have a Type 2.

Which 1972 silver dollar is worth a lot of money?

Rarity goes alongside value. Philadelphia coins graded MS66 or MS66+ are the rarest, while for Denver coins, the finest examples are graded MS67.

Error coins can be valuable too, especially if the error is on a good quality coin.