The penny issued in 1971 looks very similar to those issued for the previous sixty years. It’s known as a Lincoln penny, after the image of the president on its obverse.

If you have one of these coins, you might be wondering if it could be valuable. That’s what we’re here to find out!

We’re going to investigate the 1971 penny value. And we’ll also explore its history, design and some of the interesting error coins out there.

The cent – often called the penny after the British coin – was first issued with Lincoln’s portrait in 1909. The year marked a century since Lincoln’s birth. And it was the first American coin to bear an image of a real person. Earlier “heads” sides of coins had depicted the mythological Lady Liberty.

Lincoln pennies are still being produced today. But the new coins are quite different to those issued in 1971.

That’s partly because of what they’re made from. The original Lincoln pennies were 95 per cent copper. There was a brief switch to steel in 1943, to release copper for munitions in the Second World War. And in 1973, rising copper prices saw coins dated 1974 made from aluminum.

In both cases, the experiments were short-lived. The 1971 penny was made from the original recipe of 95 per cent copper. But in 1981, the composition changed for good.

Once again, it was rising copper prices that lay behind the change. Today’s coins are made from copper-clad zinc instead. They still have the characteristic red and brown color, but are much cheaper to produce.

Another difference between the 1971 penny and today’s cents is their appearance. The portrait of Lincoln is very similar. But turn the coin over, and the reverse is completely different. Today you’ll see a shield, known as the “Union Shield” and signifying unity.

But back in 1971, the image on the reverse was the Lincoln Memorial in Washington DC. It had first been introduced on the pennies struck in 1959. Before that, the image had been two ears of durum wheat.

The Lincoln Memorial continued to be used until four new commemorative reverses were designed for the Lincoln bicentenary in 2009. And it’s for that reason that cents bearing this design are sometimes referred to as “Lincoln memorial pennies”.

The “heads” side of a coin is known to collectors as the “obverse”. And if you look at the obverse of a 1971 penny, it will look very similar to a modern cent.

It carries the same portrait of Abraham Lincoln, the former president, that has appeared on cents since 1909. The image was the work of a sculptor named Victor David Brenner. And he in turn based his portrait on a photograph of Lincoln taken at the studio of Matthew Brady.

Lincoln is shown wearing a jacket and cravat, with only his head and shoulders visible. He faces to the right. Brenner later explained that he’d imagined Lincoln as he would have looked when reading to children, giving him a bright expression.

At the lower edge of Lincoln’s shoulder are a set of tiny letters. They are “VDB”, Brenner’s initials. They had originally appeared on the reverse of the coin, but attracted controversy. Some felt they were too large, and they were removed – despite Brenner’s protests.

They were not reinstated until 1918, when they were moved to their current position.

The words “In God We Trust” appear above Lincoln’s image. “Liberty” is inscribed to the left, and the date is to the right.

If your penny was minted in Philadelphia, the first mint facility, it won’t have a mint mark. But if it was minted in Denver or San Francisco, there’ll be a “D” or an “S” respectively. Look for it just below the date. 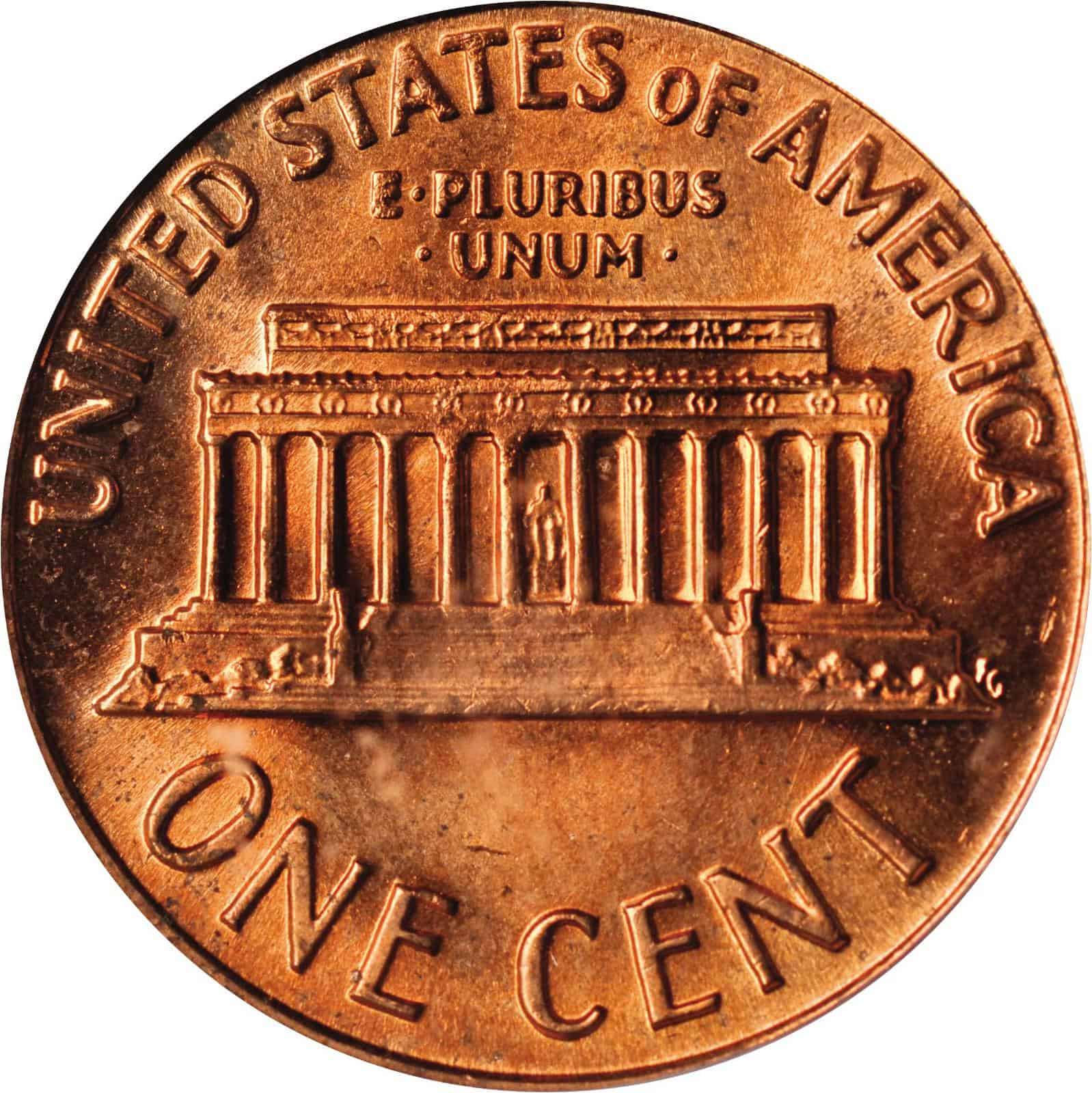 The reverse of the 1971 penny depicts the Lincoln Memorial in Washington DC. Look closely, and you can see Lincoln’s statue in the middle of the portico. That makes it one of the few American coins to portray the same person on both the obverse and reverse.

The image is the work of Frank Gasparro. It was first used in 1959, to mark 150 years after Lincoln’s birth. At that time, Gasparro was the Mint’s Assistant Engraver. But by the time the 1971 penny was rolling out of the presses, Gasparro had been promoted to Chief Engraver. He remained in that post until 1981.

The Latin motto “E pluribus unum”, meaning “From the many, one”, appears above the Memorial. It’s a reference to the creation of the USA from the many states.

Above it, curving along the top edge of the coin, is inscribed “United States of America”. And at the bottom, also following the coin edge, is the denomination.

Other Features of the 1971 Penny

As a copper coin, the 1971 penny can be graded as one of three different colors.

When the copper is new, it’s a bright red shade. That begins to darken and turn brown as it’s exposed to oxygen or handled. And how red or brown an individual coin is can make a big difference to its value.

All other things being equal, coins that have retained at least 95 per cent of their red color are the most valuable. They’re designated “red” as part of their grading, and you may see the abbreviation “RD” in their description when they’re offered for sale.

Coins that are at least 95 per cent brown are graded “brown”, or BN. They’re the least valuable. And those that are somewhere in the middle are “red and brown”, or RB.

Note that the percentages here refer to the color on both sides of the coin.

For relatively modern coins, like the 1971 penny, only red coins are usually worth more than their face value. But there are exceptions, and error coins graded brown, or red and brown, can be valuable too.

This YouTube video from CoinOpp takes you through the different designs of Lincoln cents through the years. 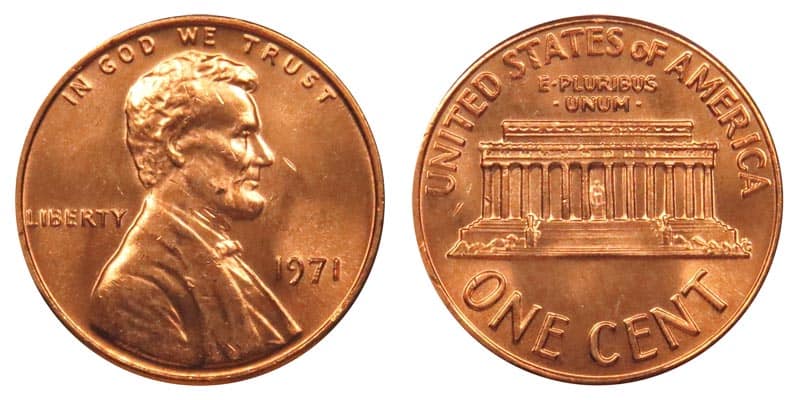 If your penny doesn’t have a mint mark, that means it was minted in Philadelphia. Just under two billion pennies were struck in Philadelphia in 1971. That means that they’re still easy to find today. And the vast majority won’t be worth more than their face value.

But if you have an uncirculated red coin, in excellent condition, that will change. At MS63 (the MS here stands for “mint state”), that 1 cent coin is worth $11. Not a bad return. And the value climbs with the quality.

A gem quality MS65 penny is worth around $40. At MS67, that rises to $185. And the finest quality 1971 pennies known to exist are graded MS67+. The independent coin grading agency, the PCGS, has graded seven coins at this level. And they’re valued at around $4,600 apiece.

You can spot a 1971 penny minted in Denver by the small “D” on the reverse. Look for it on the right-hand side of the coin, just beneath the date.

1971 saw even more pennies minted in Denver than in Philadelphia – almost three billion of them. So just as with their Philadelphia counterparts, most will only be worth a cent.

Uncirculated coins in higher grades will, though, be worth more. And while mint state coins up to MS64 are less valuable than Philadelphia pennies, that changes at MS64+ and above.

A red, gem quality MS65 Denver penny from 1971 is valued at around $22. And because it’s much harder to find high quality examples, an MS67 coin will be worth around $275.

That’s the highest known grade for a 1971 Denver penny. Its relatively modest value reflects availability. To date, the PCGS has graded 275 coins at this level. 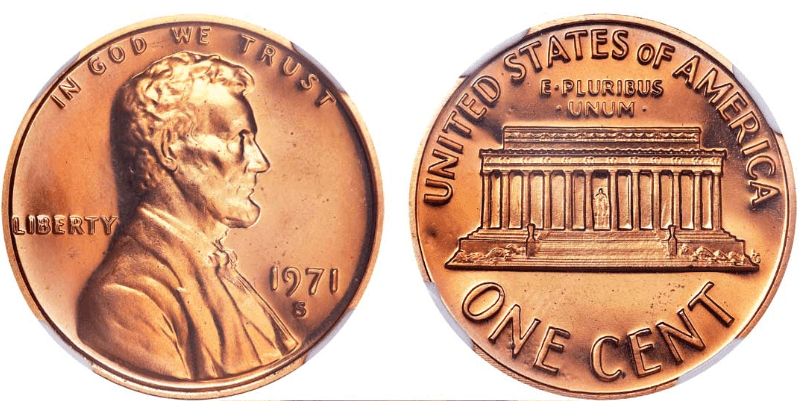 The San Francisco mint facility struck both regular and proof pennies in 1971. But while the proof coins are finer quality, highly graded mint state examples can be rarer – and hence more valuable.

Both regular strikes and proofs carry the San Francisco mint mark. The “S” appears on the reverse, below the date.

Fewer coins were struck there for circulation than in Philadelphia or Denver. But over half a billion were still produced, so they’re not rare at lower grades. You’ll need a red coin in mint state for it to be worth more than its face value. 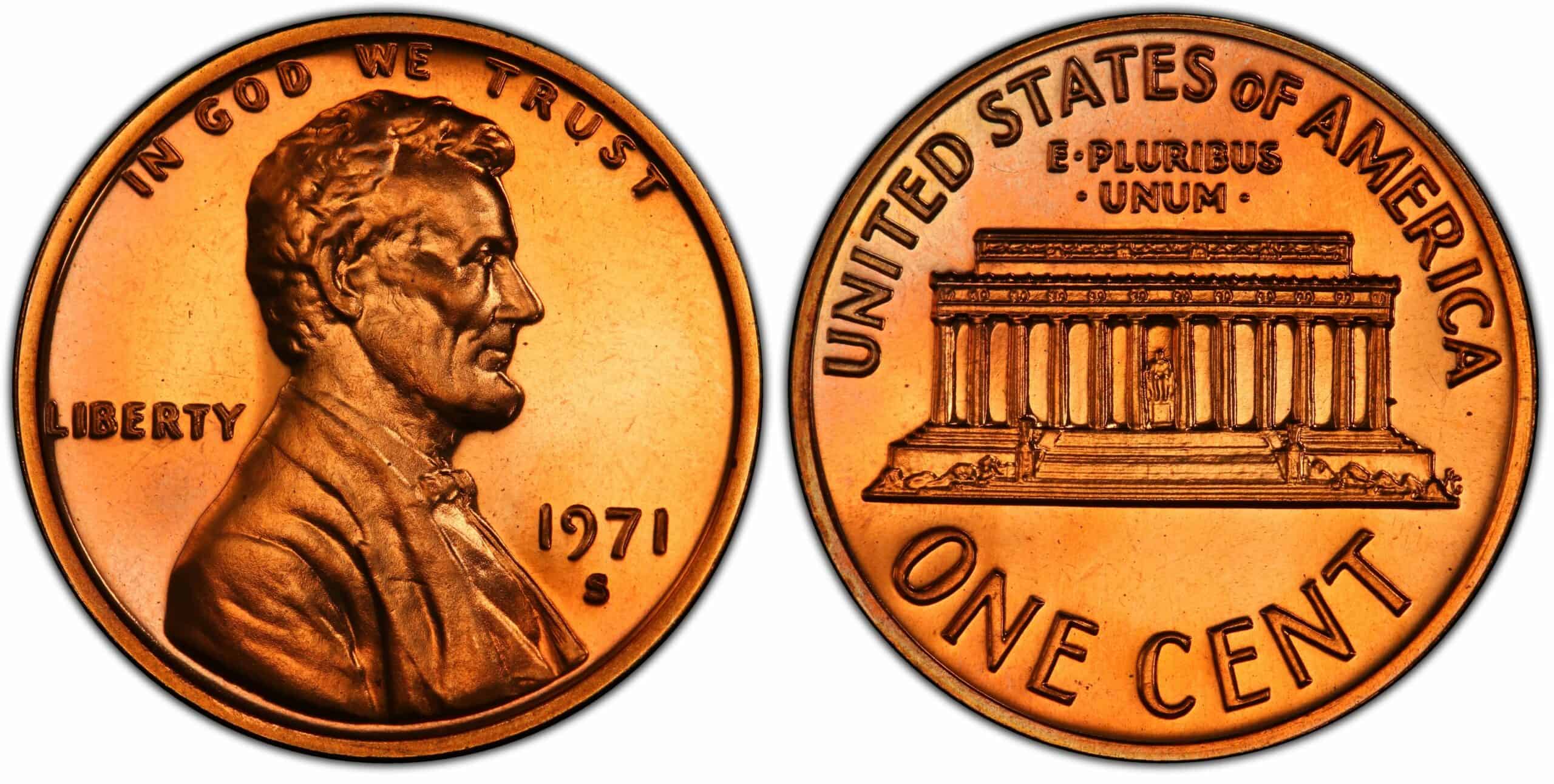 Proof coins can be separated into three categories: deep cameos, cameos, and those without either designation.

The latter category contains the most affordable coins. Cameos – coins with an attractive contrast between glossy fields and frosted devices, are usually more expensive. And deep cameos – those with a stronger contrast – are more valuable again.

Just how much of a premium is added by the cameo or deep cameo designation varies according to the coin grade. Unusually, at PR68 the PCGS values both undesignated and cameo coins at $20 apiece. And at PR66, the difference in value between a cameo and deep cameo is just $1.

But at the highest levels, values can be very different. At PR69, an undesignated 1971 proof penny is valued at $32. If that proof is designated a cameo, the value rises to $100. And because deep cameos are so rare at this level, such a coin is valued at $4,100.

The 1971 Philadelphia penny includes examples of a type of error known as a “double die”.

This occurs as the die is being made. Years ago, the die had to be struck repeatedly to transfer every element of the design from the hub. And if it moved during this process, the example was a double image. This was then transferred onto every coin struck by the die.

With the 1971 (P) penny, the error occurs on a die used to strike the obverse of the coin. The doubling isn’t as easy to see as on some other mintages with double die obverses. You’ll probably need a microscope or loupe to spot it. It’s strongest on the words “Liberty” and “In God We Trust”.

But while it might not be the most dramatic example of doubling, it is one of the rarest. Only a few hundred examples are believed to exist, with fewer than 50 at MS65 and above.

The auction record, though, was for a red Philadelphia penny graded MS66. It combined the double die obverse with a misaligned die that produced a slightly off-center image. It sold at auction in 2011 for just under $15,000.

The doubling is apparent on the words “Liberty”, “In God We Trust”, and – in some varieties – on the date too.

Today, the finest known red example of a 1971 S proof double die obverse is graded MS68 and valued at just over $1,000. And a coin at the same grade with the cameo designation is worth around $1,500.

This YouTube video from Couch Collectibles looks at these, and more, examples of 1971 penny errors.

Are pennies from 1971 worth anything?

Most 1971 pennies aren’t worth more than their face value. That’s because they were produced in large quantities, and they’re still easy to find today.

But if you find a coin in exceptional condition, or with a rare error, it can be valuable. One 1971 coin with a double image on the reverse, struck with a misaligned die, sold for almost $15,000 at auction.

1971 pennies with an S mint mark were produced in San Francisco. San Francisco produced fewer pennies for circulation in 1971 than the facilities in Denver or Philadelphia. But it still struck over half a billion coins that year – so they’re not rare.

What would make a 1971-S penny rare would be a very high-quality coin, or one that had an interesting error. Look for doubling on the letters of “United States of America” and “Liberty”. Coins with this error are far rarer and can be valuable.