Shortly after the assassination of then-President John F. Kennedy, the US Mint redesigned the existing half-dollar coin in his honor. Thus, the first specimen appeared as early as 1964, just a few months after this horrible event.

The 1971 Half dollar value is pretty low since these coins are not particularly scarce and collectible pieces of American coinage. Only specimens with a rating above MS 67 or rare errors can be pricey.

History of the 1971 Kennedy Half Dollar

The Kennedy half-dollar is a commemorative coin designed after the favorite American President’s assassination. The first minted copy appeared in 1964, just a few months after his death.

Everything was organized fast, and Congress approved a new design for the new coin within a month after the unfortunate event in Dallas. The quick finding of the conceptual solution was possible due to the use of the already existing work of a prominent sculptor Gilroy Roberts.

Then-mint director Eva Adams notified chief engraver Gilroy Roberts of a change in the coin’s design. The only question was whether it would be a dollar, a half dollar, or a quarter.

The late President’s widow, Jacqueline Kennedy, expressed her wish to choose a half-dollar. She reasoned that replacing George Washington in the quarter wouldn’t be patriotic.

The new obverse design was Roberts’s work, and he based his idea on the already existing bust from the Presidential Series Kennedy medal. Similarly, Frank Gasparro modified the existing design from the same medal to create the reverse.

Initially, the early Kennedy half-dollar contained 90% silver, but it caused a significant problem with the number of circulated pieces. Since the silver price on the stock market continuously raised, many Americans found melting coins more profitable than using them as coinage.

Learned from that experience, the US Mint quickly changed the metal composition as early as 1965 and reduced the silver percentage to 40%. The complete silver elimination from the half-dollar took place in 1971, making this coin the first specimen made of copper and nickel alloy in American coinage history.

Features of the 1971 Kennedy Half Dollar

The characteristic that distinguishes the 1971 Kennedy half-dollar from other pieces struck in the previous series is the metal alloy used for minting. It is actually the first US half-dollar that contained alloy without even a minimal silver percentage.

The obverse of the 1971 Kennedy half-dollar 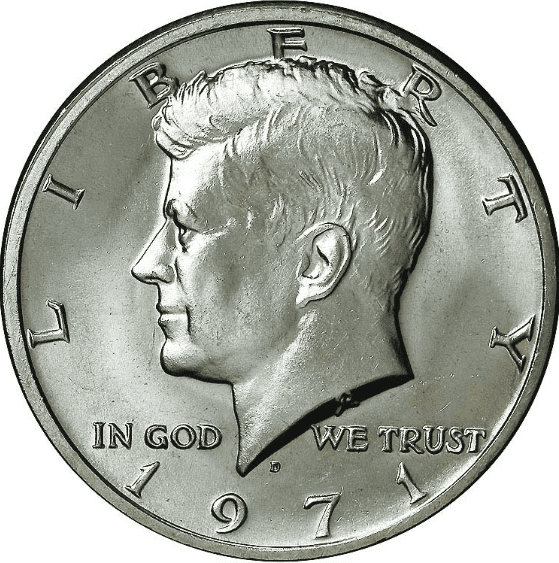 A dominant depiction of the assassinated President Kennedy’s bust is on the obverse. The profile facing to the left is in the coin’s central part, while you can see the word LIBERTY on the upper rim, partially covered by his hair.

Below the bust is the phrase IN GOD WE TRUST divided into two parts. You can also find the mint mark below the bust, while the minting DATE extends along the bottom coin rim.

The reverse of the 1971 Kennedy half-dollar 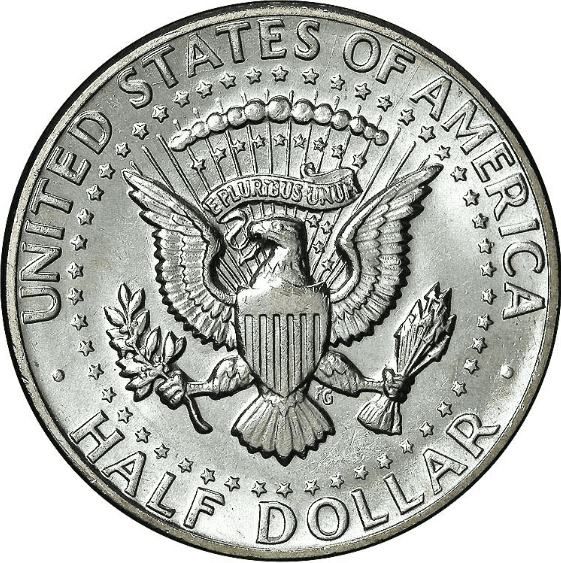 The 1971 Kennedy half-dollar reverse design is essentially a combination of several elements from other coins. The central part shows an American bald eagle with spread wings with the American President’s coat of arms on its chest.

You can see an olive branch in its left claw, while a bundle of arrows is in the right one. Above the eagle’s head is a band on which is written the mandatory Latin saying E PLURIBUS UNUM.

The UNITED STATE OF AMERICA stretches along the upper rim, while the HALF DOLLAR denomination is on the bottom. Finally, a ring of 50 stars separates the eagle design from the inscription.

Other features of the 1971 Kennedy half-dollar

Three mints produced a little less than half a billion Kennedy half-dollars in 1971. Since it was the first half-dollar minted without silver content, this date was interesting for collectors. 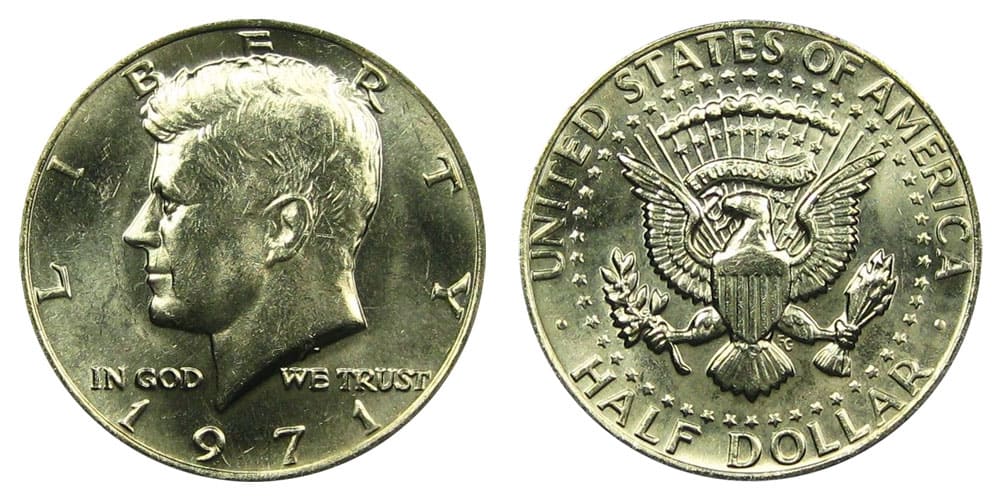 The 155,460,000 Kennedy half-dollar produced in the Philadelphia mint in 1971 was not the highest mintage that year. As always, the mint mark absence confirms that you have a coin from this mint.

Due to their large number, these coins’ value on the coin market is pretty low. You can buy a circulated specimen in average condition for slightly more than its nominal value, or about 60 cents. Those in the mint state are more valuable, and you can get $45 or more for such coins.

Fortunately, some of these half-dollars reached significant prices at auctions. For instance, one specimen was paid $1,560 in 2018 primarily because of its extraordinary beauty and high grade.

On the other hand, pieces graded MS 64 and MS 62 reached significantly lower prices at auctions. Collectors bought them for a modest $575 and $374. 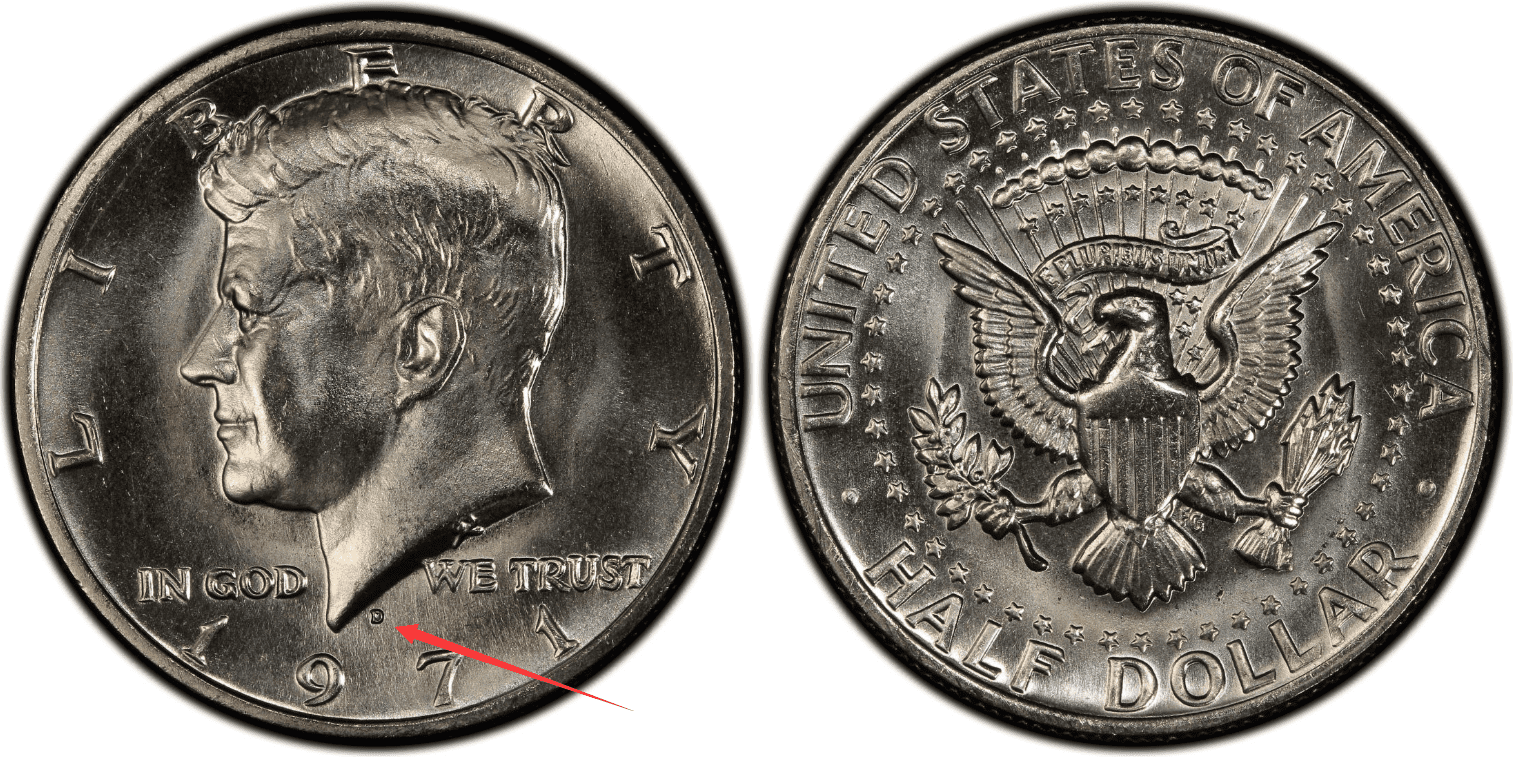 The mint in Denver was responsible for the highest Kennedy half-dollar production in 1971 since 302,097,424 minted pieces were almost two-thirds of the total mintage. You can easily distinguish a coin from this mint by the D mint mark struck on the obverse.

Such a high number resulted in their abundance in the coin market, affecting the half-dollar value. Most pieces never reach significant prices, and those in circulated condition are not even collectible.

Even though you can expect only 60 cents for a circulated specimen in average condition, it is still a higher price than the coin’s nominal value. Even a well-preserved piece in the mint state doesn’t have an exceptionally high price and can be yours for less than $3.

However, some specimens can reach incredible prices at auctions. For instance, the 1971 D MS 61 Kennedy half-dollar reached a remarkable $13,000 on eBay in 2018.

On the other hand, two specimens in AU 55 grade were sold for significantly less money at two separate auctions in 2003. One collector bought one of these coins for $6,038 at Heritage Auctions, while the second coin was paid $3,910 at Goldenberg Auctioneers. 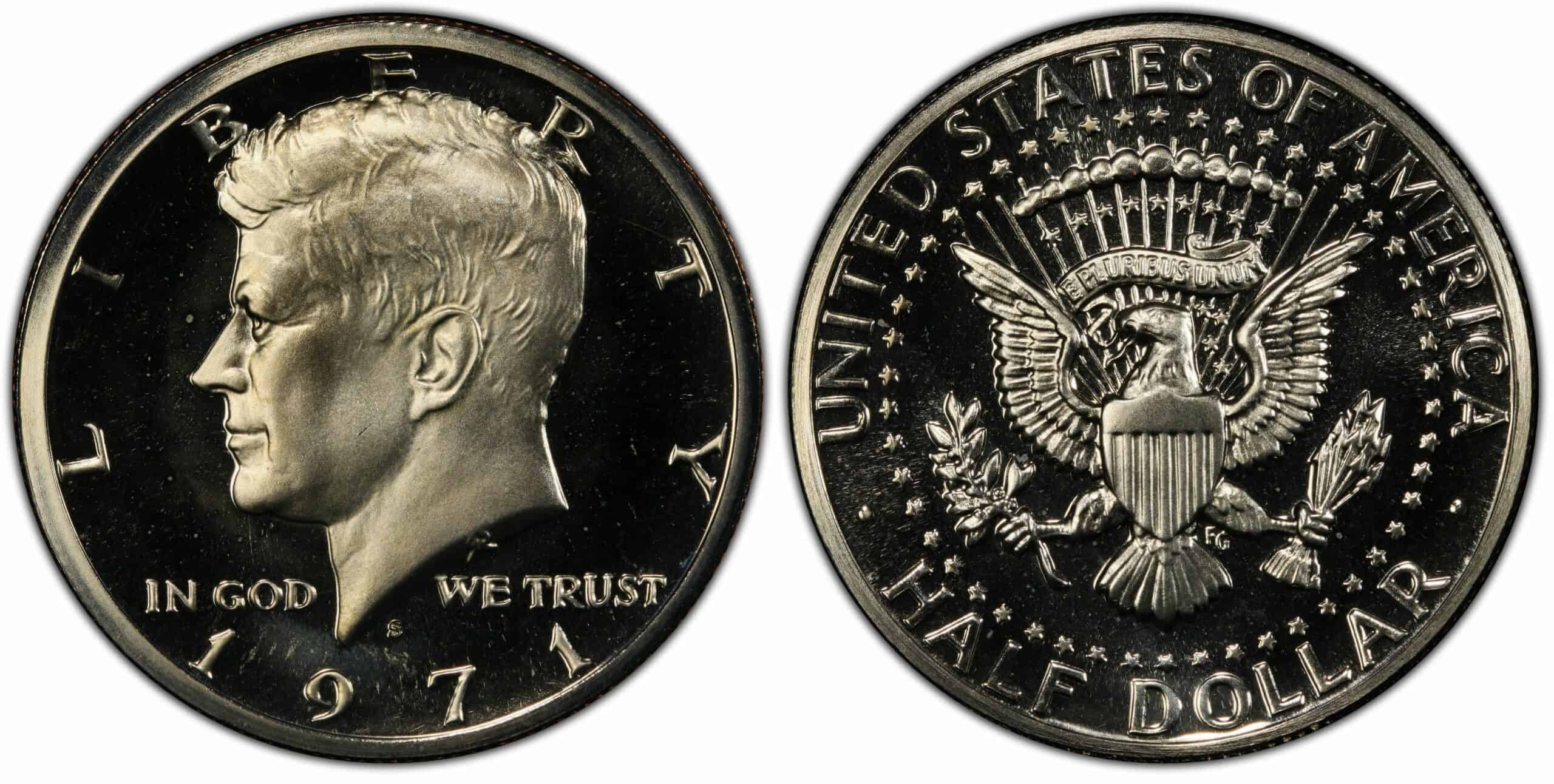 The San Francisco mint had the lowest Kennedy half-dollar mintage in 1971. It produced 3,244,183 pieces, but there were no coins from the regular strike. This mint released only proof coins this year, and you could recognize them by the mint mark S on the obverse.

Since these proof coins were of the highest quality, their value is slightly higher than the others from this series. Typically, you need to set aside about one dollar for a specimen in average condition.

On the other hand, coins in the mint state can cost up to $850, depending on the variation. As expected, the half-dollar with a deep cameo contrast will be the most expensive.

You can see that these coins’ value increases with a struck quality. For instance, the proof coin with a deep cameo contrast is always valuable. One collector bought it for an impressive $12,000 in 2018, while the most pricey standard proof was paid a modest $1,821 at Heritage Auctions in 2013.

Average 1971 Kennedy half-dollars never come with a significant value due to their large mintage. Therefore, their prices are barely higher than their face value. However, errors that occur during minting typically cost more.

Since 1971, the Kennedy half-dollar contained copper and nickel instead of silver. However, some silver planchets remained in the bins for raw planchets. Then, they got into the machine and struck coins with the new date.

The exact number of these specimens is unknown. However, they are definitely scarce and expensive, reaching over 10,000 dollars at auctions.

The 1971 Kennedy half-dollar struck on a nickel planchet has a plain edge instead of standard reeds. Also, you can notice that it looks like as it comes with a missing piece along the rim. The reason is the nickel planchet diameter that is not wide enough for a standard half-dollar. 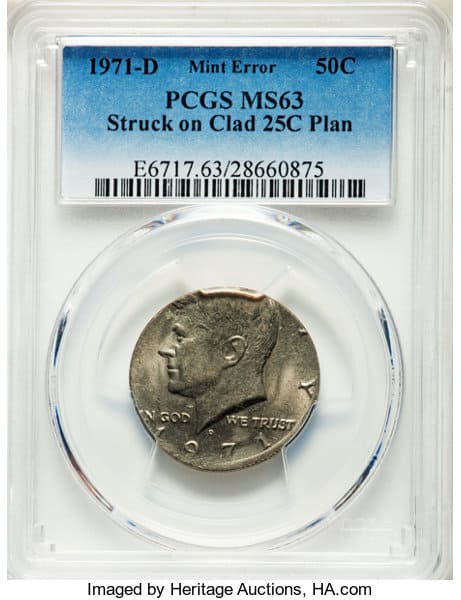 Similar to the error on the nickel planchet, you can see that the 1971 Kennedy half-dollar produced on the clad quarter planchet also looks incomplete. The reason is also the same, and the error appears when the planchet type is not big enough for a half-dollar.

The penny planchet is visibly thinner and smaller than the half-dollar one. Since this coin comes with a large missing part, you can quickly visually recognize this error. 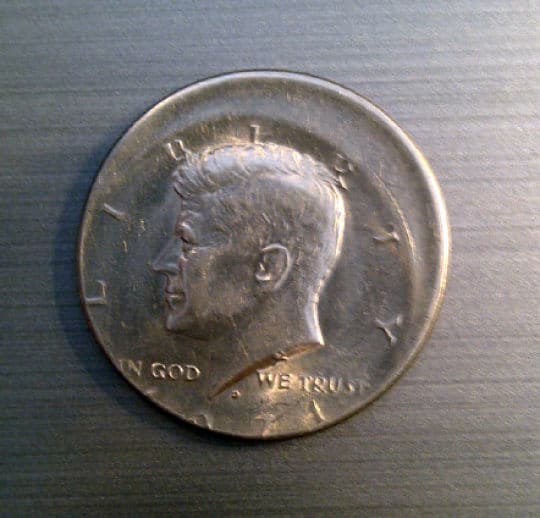 This common error occurs when the improperly placed die hits the tile off-center. You can notice such a coin by the crescent-shaped part on the surface.

Off-strike can be from 5% to 95% from the center, and each half-dollar value varies depending on that feature. As expected, the most collectible and valuable are those with the highest error percentage.

This error appears when the die hits the planchet two or three times. It is a common mistake in many series, including the 1971 Kennedy half-dollar.

The only way to notice such imperfection is to carefully look at the mint mark and check the details on letters and numbers. If you see a slight doubling, you can be sure that you have a potentially valuable coin.

This coin comes with the visible lack of the part in a unique crescent shape. This error typically occurs when the die mistakenly catches the coin edge and cuts it off.

FAQ about the 1971 Kennedy Half Dollar

What makes a 1971 Kennedy half-dollar rare?

The 1971 Kennedy half-dollar mintage was close to half a billion pieces, making this coin abundant. However, some errors can be scarce and collectible.

Which 1971 Kennedy half-dollar is worth a lot of money?

How much is the 1971 No Mint mark Kennedy half-dollar worth?

The coin’s value primarily depends on its condition. For instance, you can pay about 60 cents for the 1971 No mint mark Kennedy half-dollar in the average condition.

On the other hand, the piece in the mint state can reach $60 at auctions. On a good auction day, a high-grading half-dollar can bring you up to $2,500.

What is the rarest 1971 Kennedy half-dollar?

In 1971, the Kennedy half-dollar composition changed, and these pieces came without silver content. However, some 1971 D halves were mistakenly minted on silver planchets. These specimens are rare and can reach significant sums at auctions.