The 1970 quarter is one of those known as the “Washington quarter”. But is there anything about this year that marks it out as special? And what might one of these coins be worth?

We’re going to investigate the 1970 quarter value. We’ll find out what makes a coin interesting and valuable to collectors. And we’ll learn more about its history and features.

So if you’re ready, let’s dive in!

History of the 1970 Quarter

The quarter issued in 1970 was one of a series known as Washington quarters. They get their name from the image of George Washington that appears on their obverse.

Washington quarters were first introduced in 1932, but there had been many quarter coins before that. The first were produced in 1796, and after 1831, they never went out of production.

The denomination came from Spanish currency, where it was the practice to divide milled dollars into eighths. The divided dollar was known as the “piece of eight” renowned in pirate legend.

Two eighths equalled one quarter. And it’s for this reason that the quarter is still colloquially referred to as “two bits”.

The Washington quarter was made of 90 per cent silver until 1964. But the rising silver price meant that a more cost effective option was required. New quarters were made with a copper core clad in a silver-colored coating of cupronickel.

The new composition was given the nickname the “Johnson sandwich” after Lyndon B. Johnson, the president at the time. All 1970 quarters are made in this way.

These coins honored each state in the order it joined the union or ratified the Constitution. The aim was to interest a new generation of coin collectors, and in that it was highly successful. The 50 States quarters are among the most widely collected of any coin in the world.

Features of the 1970 Quarter

The Obverse of the 1970 Quarter 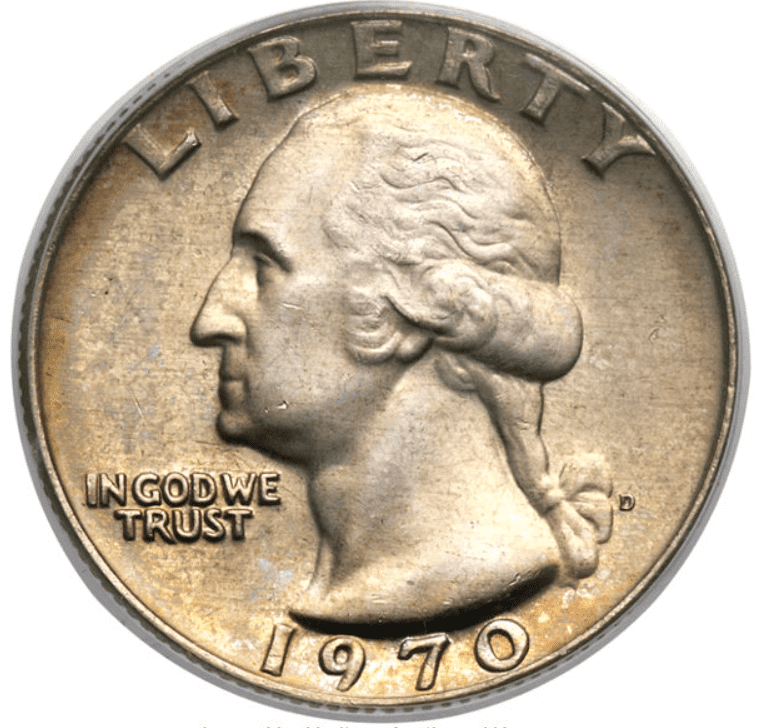 The obverse, or “heads” side, of the 1970 quarter bears the image of George Washington, the USA’s first president. The design had first been used in 1932, the bicentenary of Washington’s birth.

It was sculpted by John Flanagan, a decision that caused controversy at the time. It had originally been proposed to honor Washington with a half-dollar coin. And the bicentennial committee had already recommended a design for that coin by the artist Laura Gardin Fraser.

But the Treasury had not been involved in that decision, and declined to be bound by it. A new design competition was run for the quarter, and the committee again recommended Fraser’s design. But the Treasury Secretary disagreed, selecting Flanagan’s design instead.

Both portraits had, in any case, been based on the same source material. This was a bust of Washington that had been created during his lifetime by the French sculptor Jean-Antoine Houdon. The bust had been produced using a plaster of Paris mask placed on Washington’s face.

The former president appears in profile on the coins, facing to the left. The words “In God we trust” appear on the left of the image, level with Washington’s neck. The word “Liberty” curves along the top edge of the obverse, while the date curves along the bottom.

Quarters struck at San Francisco or Denver will have a mint mark. This appears on the right of the obverse, level with the ribbon that secures Washington’s hair.

The Reverse of the 1970 Quarter 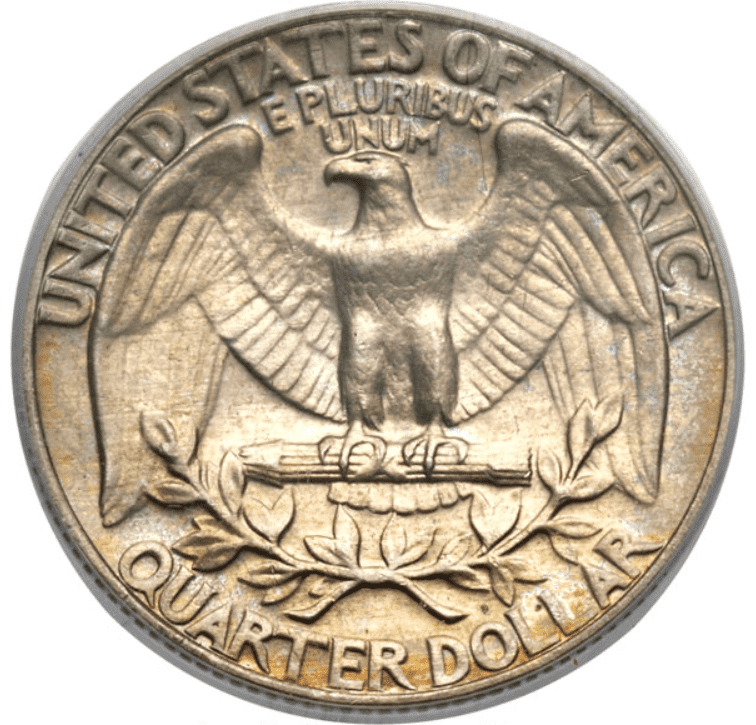 The reverse of the 1970 quarter was also designed by Flanagan. It shows the bald eagle, symbol of the United States, perched on a fletch of arrows. Its wings are outstretched and, like Washington on the other side, it faces left. Below it is an olive branch, symbolizing peace.

The Latin motto “E pluribus unum” appears curving over the eagle’s head. It means “From the many, one”, and reflects the creation of a single country from the union of the states.

The words “United States of America” run around the top edge of the coin. At the bottom is the denomination, written in full as “One quarter”. It too curves to follow the coin’s lower edge.

Other Features of the 1970 Quarter

Each 1970 quarter measures 24.3 millimeters in diameter and weighs 5.67 grams. Turn the coin on its side and you’ll see a series of grooves running around the edge, perpendicular to the coin face. This is known as a “reeded edge”.

It’s not merely a decorative device. Reeded edges were first introduced in England as early as the 17th century, and they were intended to stop fraud.

Coins made of precious metals like silver or gold would have slivers of the metal cut or filed from the edges. This practice was known as “coin clipping”, and it reduced the value of the coins. Over time, coins could be clipped multiple times.

To detect this, merchants used weighing scales to check that the coin was the right weight. If the coins were too light, buyers would have to provide additional payment to make up the difference.

But this too was open to fraud, with some unscrupulous traders changing their scales so that coins would always show as being underweight.

The reeded edge was introduced to put a stop to all such shenanigans. The design meant that it would be immediately obvious just by looking at it if a coin had been clipped. 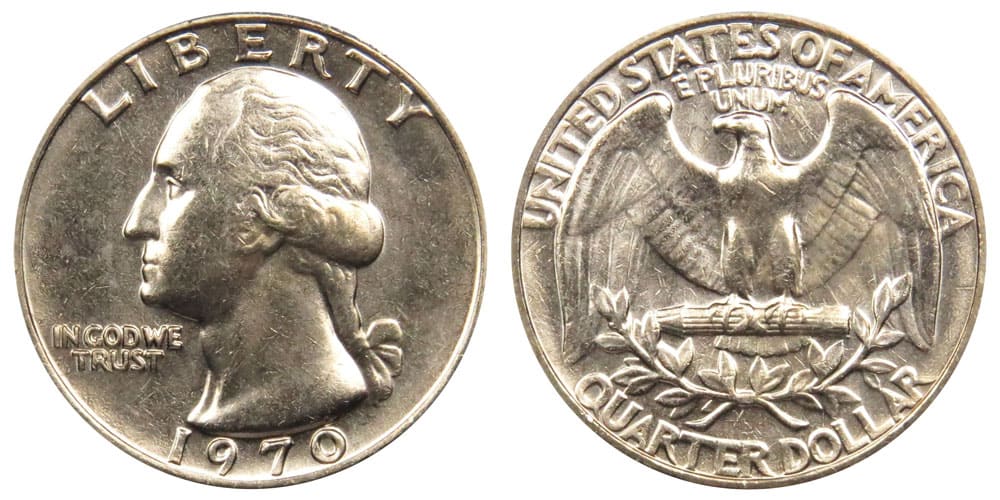 As we’ve seen, the quarters minted in Philadelphia can be identified by the absence of a mint mark. Over 130 million of them were made. And because they were produced only around 50 years ago, they’re still easy to find.

That means that standard, circulated quarters won’t be worth anything more than their face value. And even uncirculated coins aren’t particularly valuable.

The lowest grade mint state 1970 Philadelphia quarter, MS60, is valued at just $1 by the PCGS. And in all likelihood, you’ll be able to pick one up for even less than that.

It’s even fairly common in gem quality grades like MS65 and MS66. An MS66 example will be worth in the region of $55.

Denver produced more 1970 quarters than either Philadelphia or San Francisco – over 417 million of them. So just as with the Philadelphia quarters, circulated coins are only worth their face value.

Even excellent quality mint state coins are also readily available, keeping prices modest. At MS60, you won’t need to pay more than a dollar. And figures stay in double digits right up to MS67, where a 1970 Denver quarter is valued at about $70.

The quarters struck in San Francisco in 1970 were proofs. These are coins struck with specially prepared dies on carefully selected planchets. The results are beautifully detailed designs with reflective fields (i.e. the flat areas of the design).

San Francisco minted nearly 2.7 million proof quarters in 1970. And because they were destined for collectors prepared to pay more than their face value, they were stored with great care. That means they’re still easy to find today – which keeps prices lower than you might expect.

More valuable are proofs which are designated as cameos (the abbreviation “CAM” will appear in the coin description). These are coins that have a beautiful contrast between glossy fields and frosted designs. And coins with a stronger contrast are designated deep cameos, abbreviated to DCAM. One particular error coin made waves when it was offered for sale on eBay at $35,000. So what made it so valuable?

It was a 1970 proof quarter and it was graded PR65 by the NGC. But instead of being struck on a carefully selected and highly polished planchet, it had been struck on a Canadian quarter instead.

The origins of the coin are shrouded in mystery. Perhaps it was produced intentionally for a dare, or to create a collectible rarity. Whatever the reason, it was found in a proof set of coins.

It didn’t have the usual shiny finish of a proof coin. And when examined closely, it was possible to make out the faint outline of King George at right angles to Washington’s portrait.

Another error to emerge from the San Francisco mint facility was a doublestruck 1970 quarter with clashed dies. The word “Liberty”, the phrase “In God we trust”, and the date all appear twice on the obverse.

The coin was in excellent condition too, graded PR66 CAM by the PCGS. And when it was presented at auction, it realized a price of over $1,900.

Sometimes something goes wrong with the process of making a die. That results in a doubled image which is then transferred onto all the coins struck by the die.

There are examples of double die errors on the obverse of 1970 quarters. The doubling is most obvious on the date, where you can spot it on the “1” and the “7”.

Die errors were also made on the dies used for the design on the reverse of 1970 quarters. In this case, look for doubling on the letters of “United States of America”.

This YouTube video from Couch Collectibles covers both the double die errors in 1970 quarters. And it highlights other error varieties in other 1970s quarters too.

What 1970 quarters are worth money?

Most 1970 quarters aren’t worth more than their face value. The values increase for mint state or proof coins, but even then, most won’t make you a fortune.

Error coins are more valuable. Exactly how much they’ll be worth to collectors will depend on the rarity of the error, as well as how dramatic it looks.

Examples of double die errors can be found amongst 1970 quarters, with the doubling on either the obverse or reverse. And these coins can be worth more serious money, even in higher circulated grades.

1970 quarters minted in Denver can be identified by the “D” on the obverse. Denver produced more of these coins than any other mint facility. So unless your coin is in exceptional condition, or has some kind of error, it won’t be worth more than its face value.