There is hardly to find a collector who doesn’t own at least one of the Lincoln pennies produced since 1909. These coins stayed unchanged by 1958 when the US Mint started issuing the Lincoln Memorial penny collection with a different reverse.

Many factors define the 1970 penny value, but its rarity and condition are always crucial. Coins struck this year have a few varieties and errors that can bring you some profit.

History of the 1970 Lincoln Penny

The intriguing Lincoln penny history started in 1909 when this coin type replaced the Indian Head pennies. Unlike modern versions, these first pieces had engraved VDB, the designer’s initials.

Since they were oversized, most Americans didn’t like such swagger, and the US Mint quickly removed them. After almost a decade of using the original design without initials, they appeared again in the 1918 penny for short.

Interestingly, VDB engraving was the only design change on the Lincoln penny reverse by 1958. That year, the US Mint replaced ears of wheat with Lincoln Memorial to commemorate the President’s 150th birth anniversary. These coins became one of the favorite American coinage, and their minting continued by 2008.

The Lincoln penny’s metal composition has also changed several times. The first pennies contained 95% copper. The first change was made during WWII when the US Mint used zinc-plated steel to strike coins in 1943.

It was a necessary change because the army needed copper during the war, but Americans hated this coin because of its quick tarnishing and damage. The US Mint restored the initial combination the very next year, and that composition didn’t change until 1982.

After 1982, modern pennies had 97.5% zinc with added copper because of high copper prices that made Lincoln’s penny production unprofitable.

Features of the 1970 Lincoln Penny

Three mints produced the 1970 Lincoln Memorial penny in Denver, Philadelphia, and San Francisco. However, all these coins share the same design, and you can only distinguish them by the mint mark if there is one.

The 1970 Lincoln penny is not a rare coin since the total mintage for that particular year was 5,482,946,714 pieces, and most went into circulation.

The obverse of the 1970 Lincoln penny 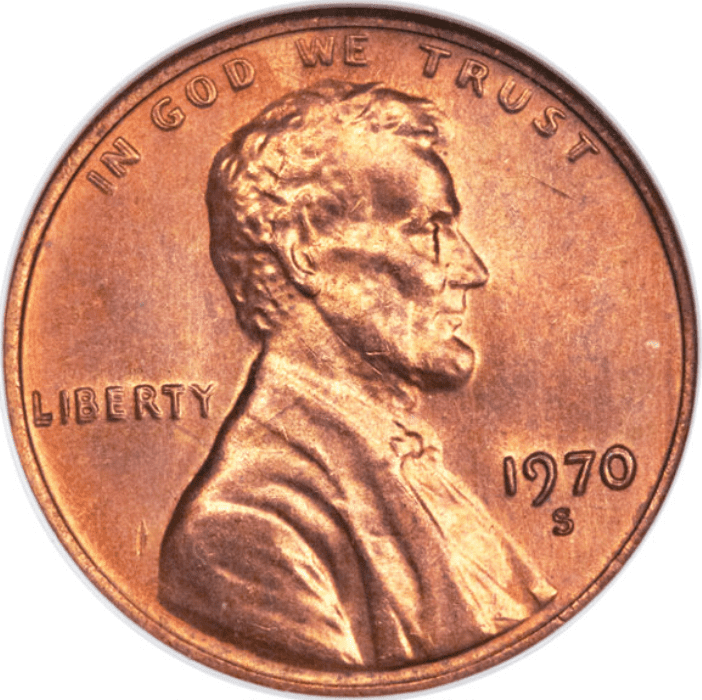 As I have already mentioned, the US Mint started with Lincoln penny production in 1909. The American medalist and designer Victor David Brenner created the original design for both coin sides.

However, the 1970 penny kept only the original obverse, while wheat stalks on the reverse were replaced with the Lincoln Memorial in 1959. It showed the 16th US President Abraham Lincoln’s profile bust. Allegedly, Brenner used an old photograph from 1864 as inspiration.

You can see the inscription IN GOD WE TRUST above the President’s head, while the issue date is on the coin’s right side, in front of the bust. The word LIBERTY is on the left, behind Lincoln’s back.

If you have a 1970 penny from the Denver or San Francisco mint, you will also see letters D or S. The corresponding mint mark is struck below the date.

The reverse of the 1970 Lincoln penny 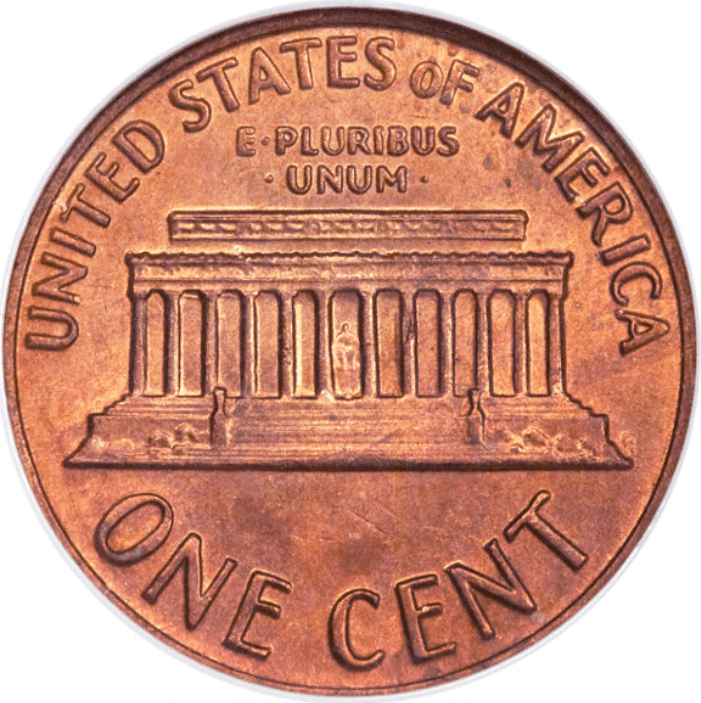 In 1952, the US Mint decision-makers thought about redesigning the Lincoln cent. However, removing Lincoln from the coin obverse was not an option, probably for political reasons.

Therefore, the Mint compromised, and chief engraver Frank Gasparro created a new reverse design. The original Brenner’s obverse stayed unchanged, and the President’s bust has been kept until now.

The Memorial penny reverse’s central motif was the Lincoln Memorial in Washington, DC. The designer reduced the original ONE CENT denomination and placed it under the Memorial.

On the top rim, you can also read the inscription UNITED STATES OF AMERICA. The traditional slogan E PLURIBUS UNUM was located just above the famous building.

Other features of the 1970 Lincoln penny

Even though well-preserved 1970 pennies are common, they are typically worth more than their face value. Plus, some pieces won a premium price at auctions. 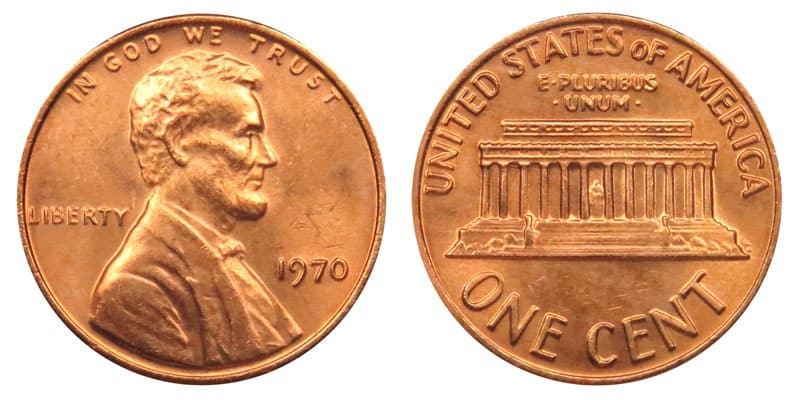 The Philadelphia mint issued 1,898,315,000 Lincoln pennies without the mint mark in 1970. Since they are abundant, most cost less than a dollar.

Some specimens in the highest grades can cost about $40 to $400, depending on their color. One of the most precious red pieces won the auction record in 2016 when one collector paid $2,820 for it at Heritage Auctions. 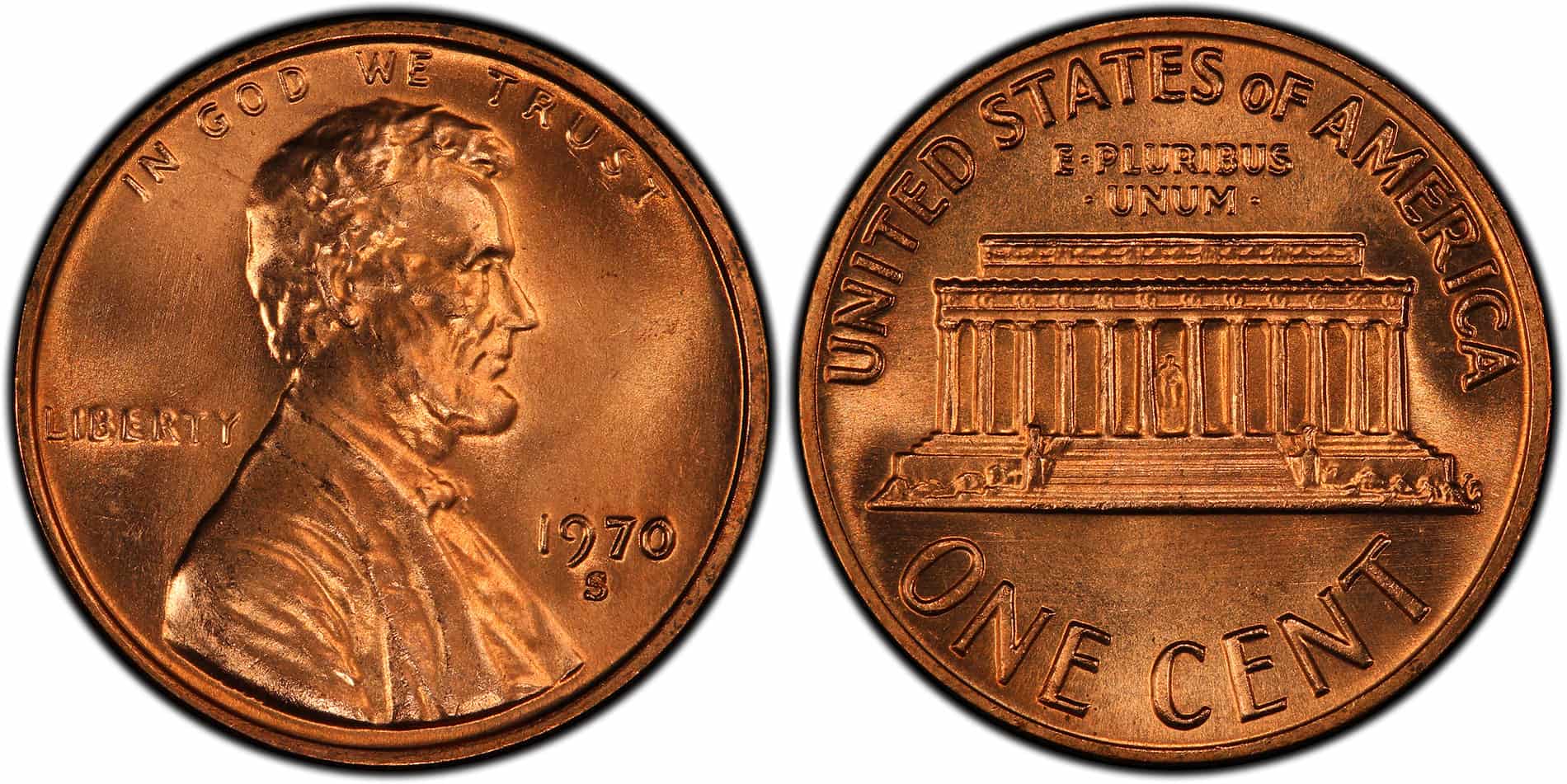 The San Francisco mint produced the smallest percentage of 1970 pennies, making them a bit more pricey. A total of 690,560,004 coins with the S mint mark went into circulation. These pennies came in two variations, which further increased their value.

The difference between these two variations is in the number look. All four digits are aligned on the top in pennies with the small date. Coins with a large date have numbers 7 and 0 that exceed the regular size.

While the 1970 S large date penny costs only $0.56, you should set aside almost $65 for the 1970 S small date penny variation. As always, the most expensive are cons with beautiful red toning. 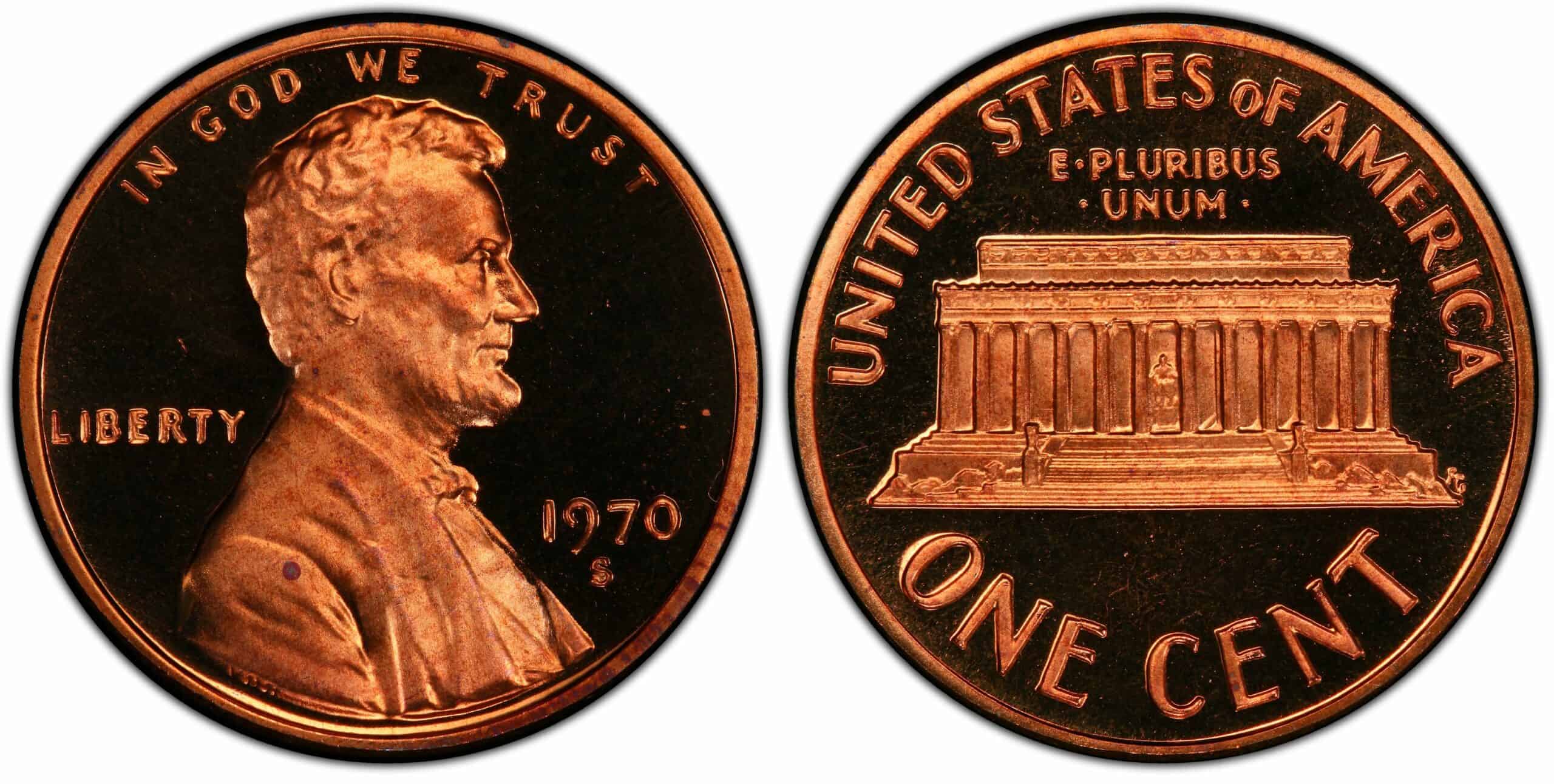 As expected, proofs are the most valuable examples of the 1970 Lincoln pennies. The San Francisco mint produced proof coins this year, so they came with the S mint mark on the obverse.

While pieces with a large date are worth only $1.13, the small date variation costs about $45. However, some of the coins in perfect condition can be pricey.

For instance, the most expensive red coin with a small date was sold in 2004 for $1,323. On the other hand, one collector paid an impressive $18,400 for the one with the DCAM contrast at Heritage Auctions in 2005.

As for the pennies with the large date, one collector paid $2,530 for a beautiful red specimen in 2003. The most expensive was the one with the DCAM contrast, which reached $3,220 at Heritage Auctions in 2002.

The mints produced pennies in bulk, so many came with different errors. However, the 1970 Lincoln penny is well-known after one specific imperfection from the San Francisco mint.

The double die error coin is the rarest penny produced in 1970, so you can expect it to be valuable. Doubling is apparent in inscriptions IN GOD WE TRUST and LIBERTY, and you can see it with the naked eye.

Depending on the color, some of these pieces in the mint state are worth several thousand dollars. For instance, the most expensive is the one with the large date in an MS 66 grade with beautiful red toning.

FAQ about the 1970 Lincoln Penny

What makes a 1970 Lincoln penny rare?

The 1970 Lincoln penny is not rare, but variations with a small date or coins with a DDO error can be scarce, particularly in high grades.

Which 1970 Lincoln penny is worth a lot of money?

How much is the 1970 No Mint mark Lincoln penny worth?

What is the rarest 1970 Lincoln penny?

The San Francisco mint produced the rarest 1970 Lincoln penny variation with a small date. Besides, it struck the rarest and most expensive DDO error with a large date in the series.

The legend says that somewhere exists at least one 1970 S DDO Lincoln penny with a small date, but most collectors doubt its existence. Finding this piece would undoubtedly bring fortune to the owner.