The US Mint started minting Roosevelt dimes in 1946, a few months after Franklin D. Roosevelt died. It was a tribute to the remarkable man who led the USA to victory in WWII.

The 1970 dime value is relatively low because billions of these coins were minted. However, rare specimens, particularly so-called Full Bands, can be worth hundreds, sometimes thousands of dollars.

History of the 1970 Roosevelt Dime

Roosevelt dimes appeared in 1946 and are still an American currency used in circulation. These coins contained 90% silver for almost two decades, but that was changed in 1965. From that year, all dimes have been made of copper and nickel alloy except for collector’s silver pieces minted from 1992 to 2018.

These coins’ history was very turbulent and a bit mysterious. From the start, it was questionable who was the real obverse and reverse designer. Officially, it was John Ray Sinnock, and you can see his initials on the obverse.

However, many numismatics believe that sculptor Selma Burke was the real author. The used design significantly resembled the bas-relief she gave as a gift to the President five years earlier.

Besides these technical doubts, most Americans believed that the initials JS belonged to Soviet leader Joseph Stalin. The Mint issued a statement identifying the designer, no matter how absurd those claims were.

On the other hand, many loved the new coin that honored the beloved war President who passed away after contributing to the Allied victory in WWII.

As you know, Franklin Delano Roosevelt was the only four-term American President in history and also suffered from polio. Therefore, creating a coin with his profile seemed natural and symbolized an extraordinary life and the struggle with a horrible disease.

After a four decades-long tradition of organizing a competition for the best coin design, the US Mint engaged Chief Engraver John R. Sinnock this time. However, the federal Commission rejected his first idea and wanted to invite five accomplished sculptors to finish the demanding job.

Unfortunately, the Mint Director disagreed because of a tight deadline. Namely, new dimes needed to be finished by the 1946 March of Dimes campaign organized on the next ex-President Roosevelt’s birthday.

Therefore, John Sinnock improved the design by replacing a small central image and a large motto. Then, he created a recognizable look you can find on all dimes minted for almost eight decades.

The Commission approved the new design on 8th January 1946, and the Mint got an assignment to produce enough coinage by Roosevelt’s birthday on 20th January.

The 1970 Roosevelt dime belongs to a long-lasting series minted from 1946 to these days. All coins produced after 1965 were made of copper and nickel, but many collectors appreciate them as a valuable part of American history.

The obverse of the 1970 Roosevelt dime 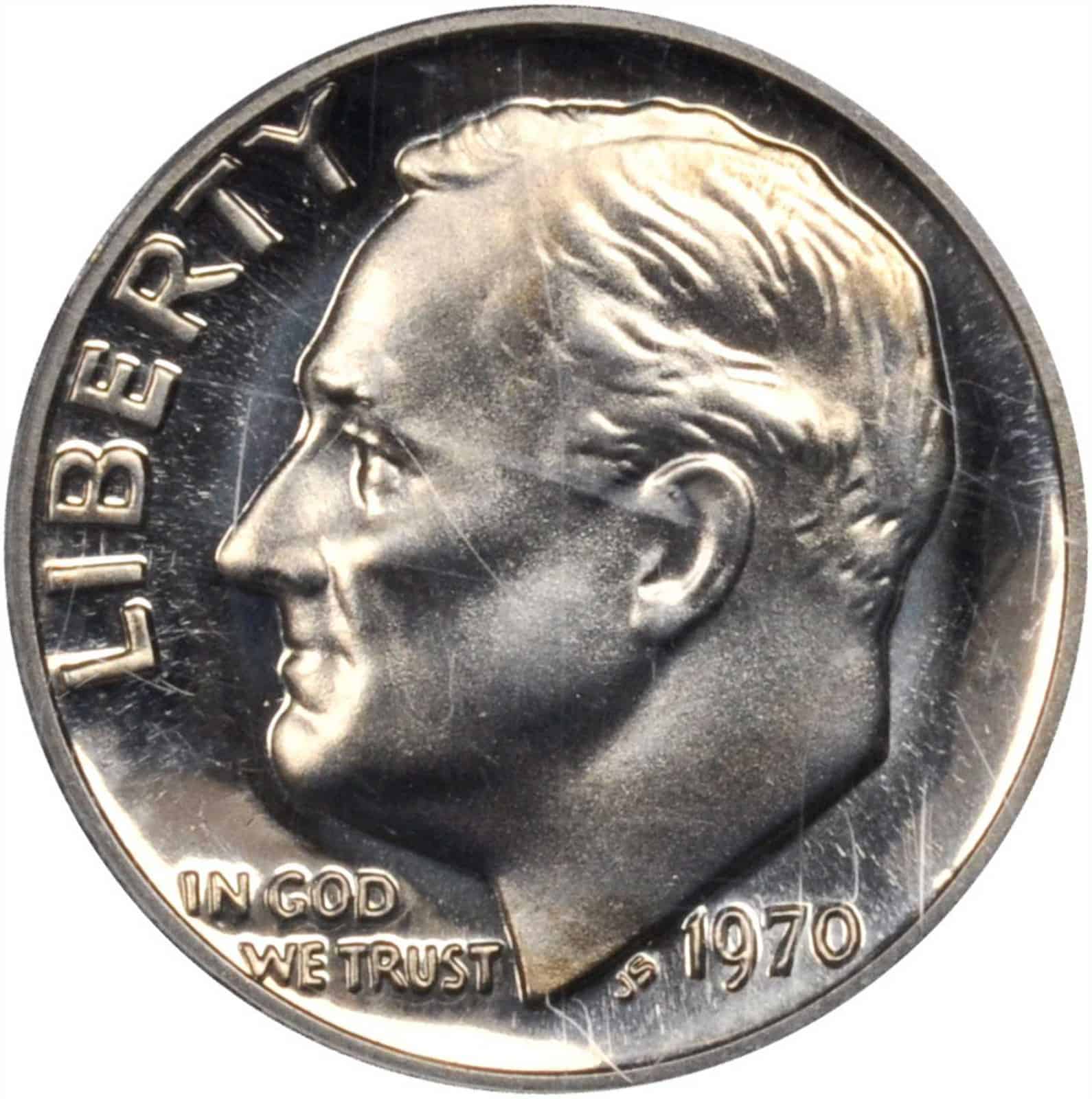 The 1970 Roosevelt dime obverse includes the centrally positioned President’s portrait facing left. The word LIBERTY is struck along the left coin rim, while you can see the famous inscription IN GOD WE TRUST and the DATE 1970 below his neck.

Coins minted in San Francisco and Denver have a small mint mark above the date. Finally, dimes from all three mints include the designer initials JS positioned below the President’s neck bottom line.

The reverse of the 1970 Roosevelt dime 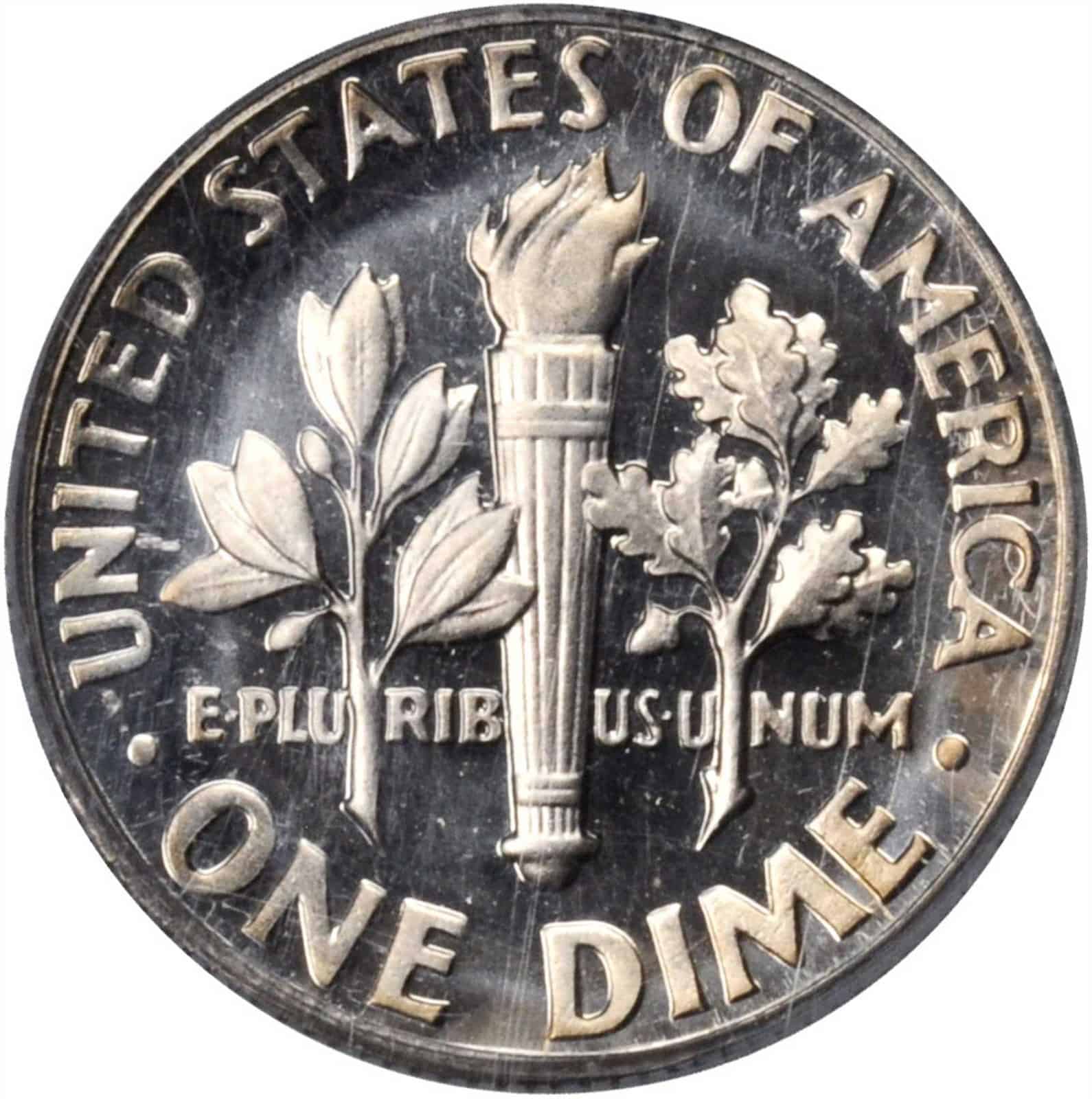 The 1970 Roosevelt dime comes with a pretty complicated reverse design. You can notice the torch of Liberty in the center, surrounded by an olive branch from the left and an oak branch on the right. All three are recognizable symbols:

Around these three symbols is an inscription UNITED STATES OF AMERICA along the top coin rim and the denomination ONE DIME on the bottom.

The Latin saying E PLURIBUS UNUM makes the design even more complicated. However, it is mandatory since the US law regarding coinage requires adding that detail.

Other features of the 1970 Roosevelt dime

The US Mint struck 1,103,144,910 Roosevelt dimes in 1970 in three state mints. However, only those in Philadelphia and Denver produced regular strikes, while the one located in San Francisco minted only proof coins this year. 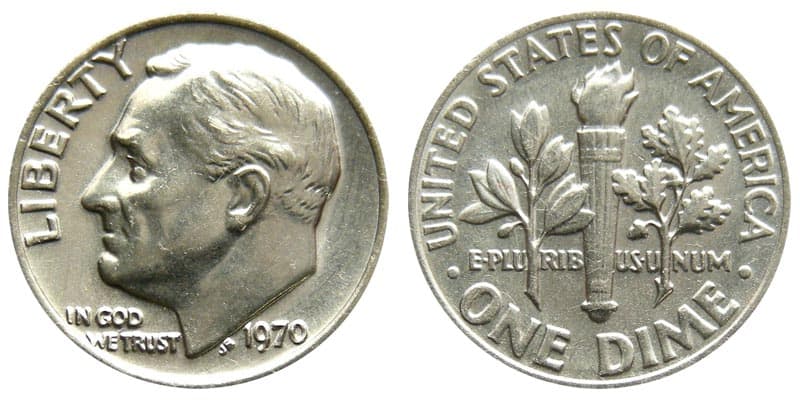 The Philadelphia mint produced  345,570,000 Roosevelt dimes without the mint mark in 1970. They are pretty inexpensive in low grades, and you can buy one of these coins for less than a dollar. Only pieces with MS 67 rating can reach $950. 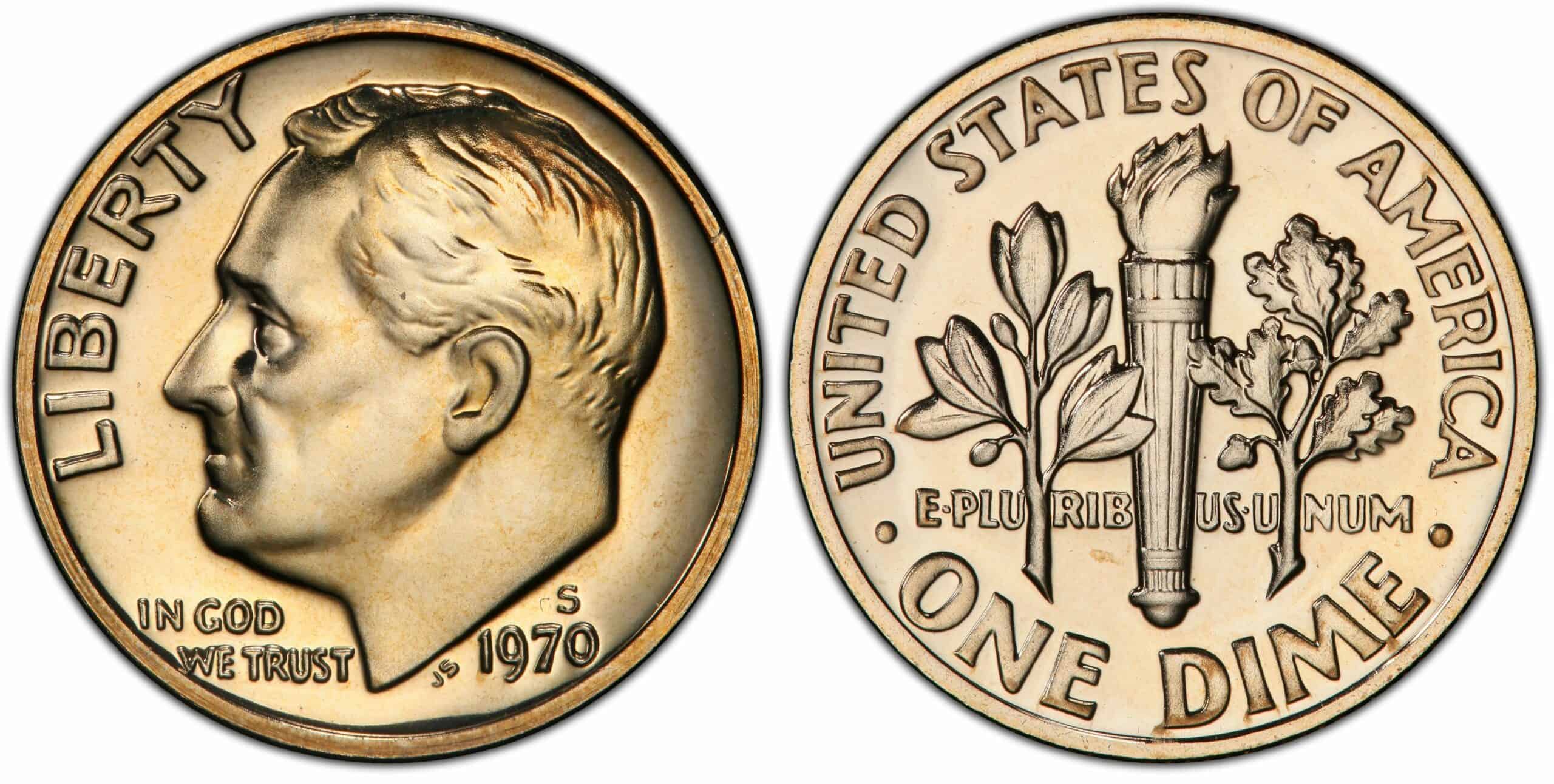 The San Francisco mint didn’t produce Roosevelt dimes from the regular strike but was in charge of minting 2,632,810 proofs in 1971. Most pieces are inexpensive, but their price is still several times higher than their face value.

Depending on the condition, you can find these coins for $1 to $6, but some top-notch ones are even more pricey. For instance, one beautiful specimen in a PR 69 grade with deep cameo contrast won an auction record after one collector set aside $288 for it in 2003.

You can find a few recognizable errors among 1970 Roosevelt dimes that can be expensive. However, you should be careful with value estimation since many imperfections are only signs of wear due to the long time spent in circulation.

Besides 1969 with the same problem, some Roosevelt dimes struck in the Philadelphia and Denver mints in 1970 came with the 1968 S proof reverse. Most people are unaware that dies used for each year always come with subtle design differences, differentiating those from each particular year possible.

Mints occasionally purposefully combine obverse dies with reverse ones produced for a previous or following year. Besides these so-called transitional reverses, such matching sometimes happens accidentally. That happened with 1970 dimes.

The result of this mistake was dimes without a well-defined torch flame. The reason was using the 1968 S proof reverse Roosevelt dime’s business working die for minting coins struck two years later.

These error pieces are typically valuable, and you can get a few hundred dollars per one. For instance, one collector paid $485 for the 1970 D Rev 68 MS 66 FS Roosevelt dime on eBay in 2018. 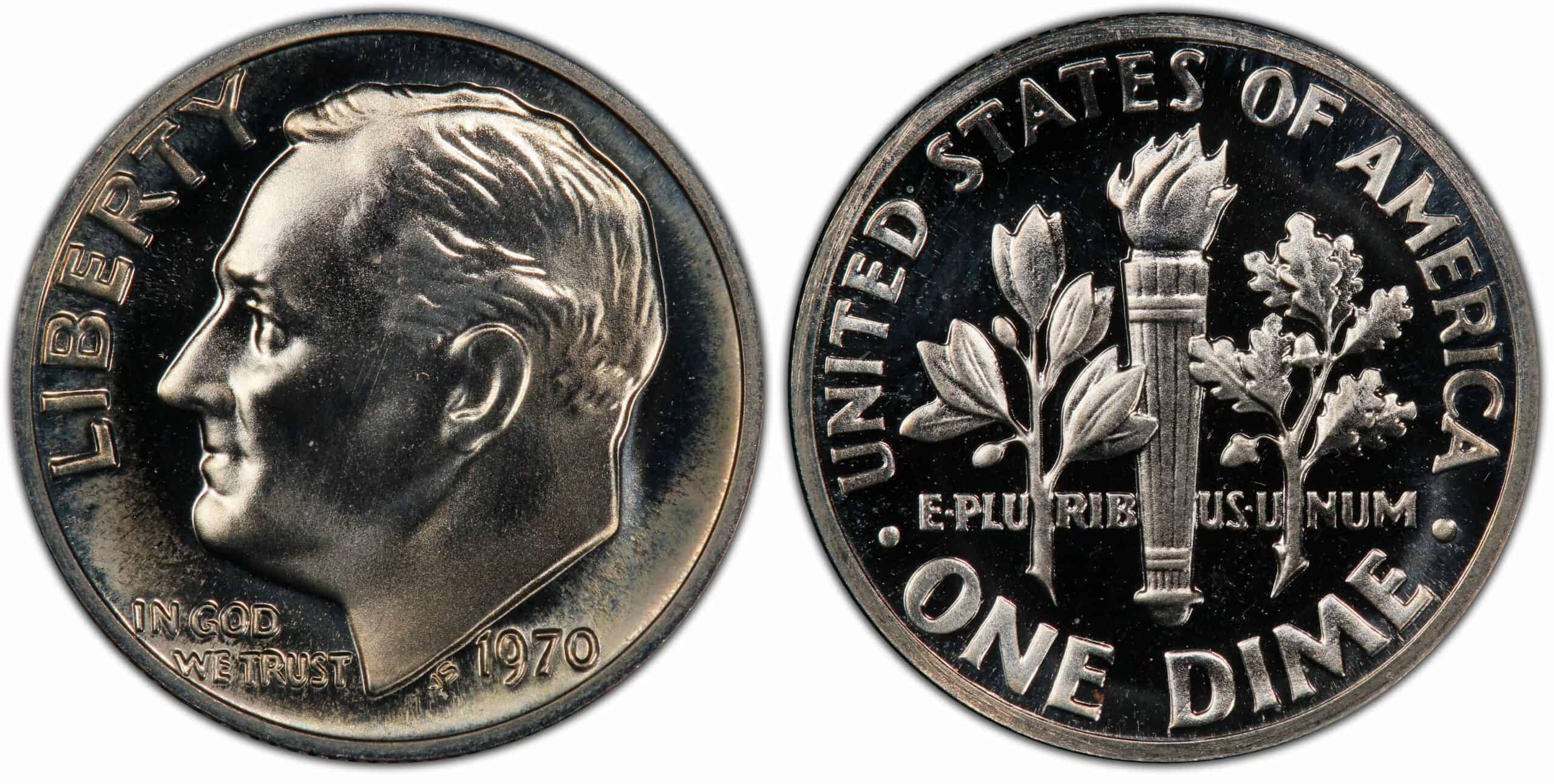 Most coins without the mint mark are those from regular strikes minted in Philadelphia. However, the San Francisco mint struck about 2,200 pieces of dimes without the required S mint mark. Experts estimate that approximately 1,000 to 1,500 such coins still exist.

This year was only one of three, including 1968 and 1983, with this error type. All these dimes were proofs and were never released into circulation, and you could sometimes find them in old proof sets.

Such a situation makes them collectible and pricey. Collectors often set aside at least $500 for these pieces. One in an MS 69 grade won an auction record of $1,610 at Heritage Auctions in 2003.

In most cases, this error is one of the most sought-after among collectors. The affected coin occurs when the die strikes a coin twice at slightly different angles.

The price depends on the error degree because some are visible with the naked eye, while you need to use a magnifying glass to notice others. While minor doubling costs about $10 or $20, you can get at least $500 for noticeable ones.

This relatively standard error is a result of a misaligned die. It also appears when the dime is not centered with the die. These coins are typically worth about $5, but the price varies depending on the off-center percentage.

Broad-struck dimes are a result of minting outside of the retaining collar. In this case, there is no collar to contain it while striking, and such a coin is thinner and wider. You can find these errors for approximately $10 to $20.

FAQ about the 1970 Roosevelt Dime

What makes a 1970 Roosevelt dime rare?

Errors are often the most expensive pieces in every series. In this case, the most famous error coin is the 1970 No S proof Roosevelt dime. Since it is rare, you should expect these specimens to be costly. Collectors are prepared to pay up to $3,000 for those with cameo and deep cameo contrast at auctions.

Which 1970 Roosevelt dime is worth a lot of money?

How much is the 1970 No Mint mark Roosevelt dime worth?

Are there any rare Roosevelt dimes?

For now, it is known that only two 1975 PR 68 No S Roosevelt dimes exist, making them one of the rarest American coins. One of these pieces was sold in 2019 for an astonishing $456,000 at Heritage Auctions.