In 1965, other coin denominations were switched from mostly silver to cupronickel cladding. The Half Dollar kept its silver a little longer, though the proportion was reduced to less than half. This directly affected the 1969 Half Dollar Value, and it still does, so let’s dig in and see!

History of the 1969 Half Dollar

Usually, commemorative coins mark a special place, milestone, or anniversary. The US Mint uses them to tap into significant national events and earn extra cash in the process. The JFK Half Dollar was different. Within hours of his assassination, both the government and the public were asking for him to be placed on a coin, and the mint insisted this wasn’t for profit.

That’s why it was never described as a commemorative coin, even though everyone saw it that way. Yes, it sold at viral levels, but revenue was never the goal. The reason they made this coin was everybody loved Kennedy, even cynical politicians! So while some coins take decades of debate, the JFK Half Dollar was approved, minted, and released within weeks!!

Business strikes of the Kennedy Half Dollar have an ironic life story. At first, they were in such high demand that few entered circulation. They went from the bank or the mint straight into secret stashes. But even after the coin shortage was over and the silver content was gone, people just weren’t used to seeing them in public, so nobody really wanted them anymore.

Eventually, banks stopped ordering them, since no one was using them except in casinos and at sporting events. By 2002, Kennedy Half Dollars were only made for collectors. Business strikes eventually resumed in 2021, and you can now see contemporary (clad) Kennedy Half Dollars circulating. Older coins pop up too, but the lack of rarity has killed their resale value.

Designing the 1969 Kennedy Half Dollar

Let’s start with the innards of this Kennedy Half Dollar. Yes, it was 60% copper and 40% silver, but the metal mix wasn’t quite so direct. The mint needed to ensure the coin retained a similar sheen to earlier 90% silver sets. So the core of the coin was 79% copper and 21% silver. To keep the color comparable, the outer layers were 80% silver and 20% copper.

That’s how you get the total 60:40 ratio even though the inside is mostly copper and the outside is mostly silver. It’s also why 1969 Half Dollars don’t have that tell-tale reddish tinge that you find on the rims of newer cupronickel-clad Half Dollars. Nice! And what about the device – which is the technical name for images on a coin? How did they get it done so fast?

They only had a few weeks to work with, so they built it up from existing artwork. Gilroy Roberts had designed a Presidential Medal that Kennedy himself had seen and approved before he was shot, so Roberts tweaked it for the obverse. Meanwhile, Gasparro took the reverse from the same medal and adjusted it to suit a coin. These changes were quite quick.

For the obverse (heads side), Roberts removed the coat, collar, and tie for better balance. Then he moved the profile lower down the coin to make room for a legend above it. JFK’s brother Bobby and his widow Jackie O asked Roberts to redefine the hair, so he did that too. They suggested a full frontal portrait as well, but Roberts advised against it – not enough time!

But he did convince them that a left-facing profile was more flattering than a face-forward headshot, so they weren’t too disappointed. Meanwhile, for the reverse, Gasparro took out the two torches and the quotation. He enlarged and centered the Presidential Seal, leaving minimal room for the legends required by law i.e. E Pluribus Unum, coin denomination, etc.

Features of the 1969 Half Dollar

The 1969 Half Dollar is a beautiful coin with deep sentimental value. It has a wide mix of elements that include radiant rays, stars, clouds, claws, peace, war, and so much more! And in 1969, business strike coins (i.e. coins minted for circulation aka everyday use) were only made at the Denver Mint while San Francisco produced a limited number of proof coins.

The Obverse of the 1969 Half Dollar

The obverse (heads side) of the 1969 Half Dollar features a portrait of John F. Kennedy, the 35th US President. He faces left, and the coin is so closely cropped that the legend Liberty is partially hidden in his hair. The coin was designed by Chief Mint Engraver Gilroy Roberts.

The right-facing profile only goes up to the neck, so the initials GR are on the neckline cut-off. In God appears on the left of his neck while We Trust sits on the right. The mint mark is centered below the neck, and the mint date runs along the lower collar of this 50-cent coin.

The Reverse of the 1969 Half Dollar 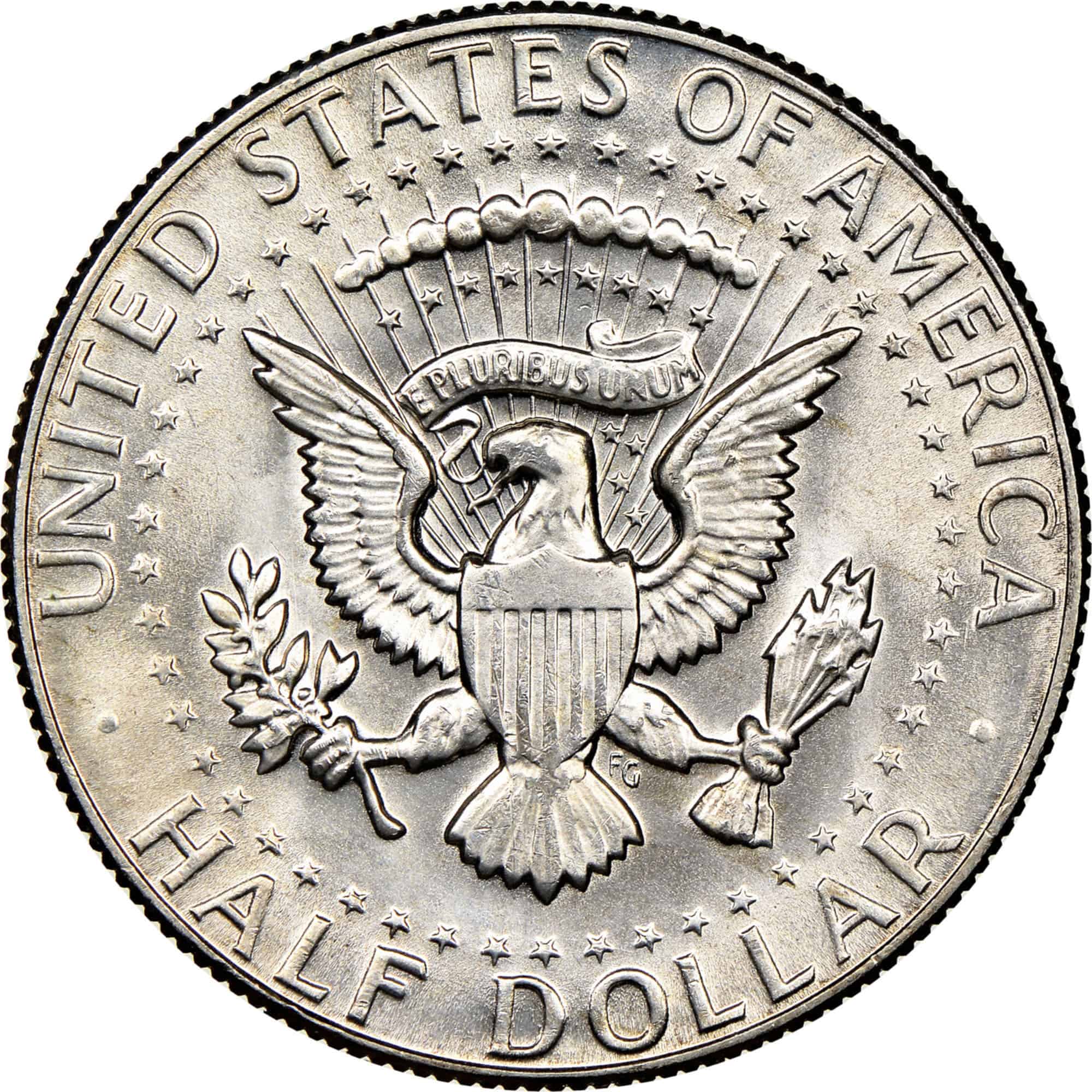 The reverse (tails side) of the 1969 Half Dollar bears the Seal of the United States President. This seal comprises an eagle with its wings outstretched and a shield on its chest. The eagle is circled by 50 stars. It holds 13 arrows in its right talon and an olive branch in its left talon. At the top of the coin, it says United States of America, with a dot on either side of the legend.

The shield has 13 stripes, and around the eagle’s head, 13 clouds and 9 stars float, with 4 more stars at the neck. The eagle holds a banner in its beak with our national motto, E Pluribus Unum. The designer was assistant mint engraver Frank Gasparro, and his initials, FG, are tucked below the right leg. The denomination, Half Dollar, runs along the bottom.

Other Features of the 1969 Half Dollar

These stretched from Columbian Half Dollars in 1892 to Booker Ts in 1946. All these coins were made to celebrate something (or someone) important while also currying public favor and raising extra revenue for the mint. Either way, the 1969 Half Dollar was 40% silver and 60% copper. It was 30.6mm in diameter, 2.15mm thick, had edge reeds, and weighed 11.5g.

The 1960s Coin Shortage was caused by spiking silver prices. Melted coins were worth more than their face value, so citizens hoarded them for bullion. Then, out of habit, they started stashing other denominations too, even if they had no silver content. But Mint Director Eva Adams decided it was numismatists that were hiding these coins due to their mint marks.

She figured they were targeting specific mints so she asked for all mint marks to be removed. As a result, all coins made from 1965 to 1967 had no mint marks, and many were deliberately marked with the wrong year. In 1968, mint marks reappeared, so marked coins from 1969 were still drawing interest. No Half Dollars were made in Philadelphia that year though. 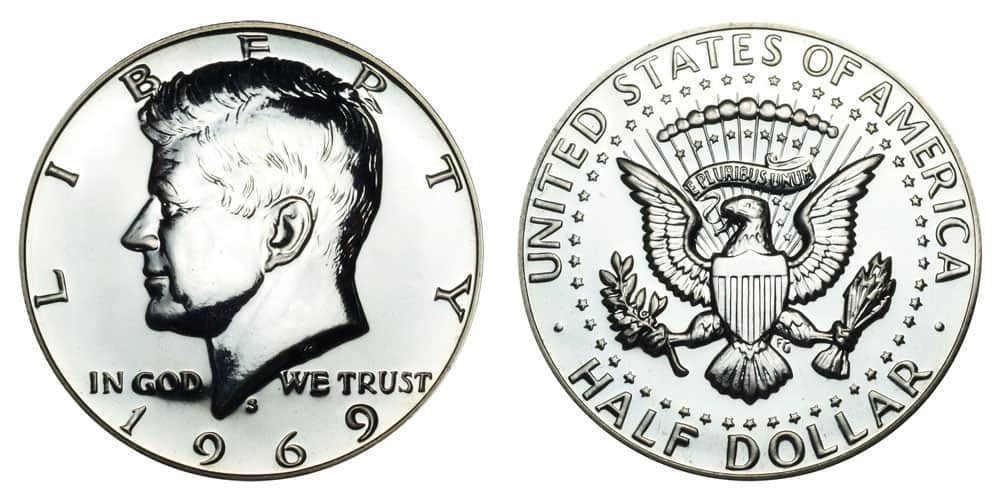 The San Francisco Mint coinage section was closed from 1955 to 1968. A few circulating coins were still made there, quietly, but they’re classified as (S) and didn’t have any mint marks. The plan was to designate it as a proof coin hub, pun intended, and from 1962 to 1968, it was known as the San Francisco Assay Office to ensure proof coin quality control.

Why does this matter? Well, PCGS (Professional Coin Grading Service) rates proofs as PR whole NGC (Numismatic Guaranty Company/Corporation) marks them PF. But this isn’t a description of quality. It’s a category of coins made on planchet sheets that are polished before the discs are cut into shape. These pre-burnished blanks are then struck with dies.

The dies themselves are specially treated to produce that characteristic mirrored field and frosted device. The first super-shiny 50 to 100 are graded Deep Cameo or DCAM by PCGS while NGC calls the Ultra Cameo. The less shiny ones that follow are graded Cameo. But business strikes or circulation coins are only polished after striking and use normal dies.

Most business strikes aren’t polished at all, so if they’re extra shiny but weren’t made with pre-burnished planchets or chemically enhanced dies, they’ll be graded as PL for Proof-Like or DPL for Deep-Proof-Like. In terms of mintage, San Francisco made 2,934,731 proofs that year. In the almost perfect grade of PR 69 DCAM, this coin once sold for $630. That’s not much! 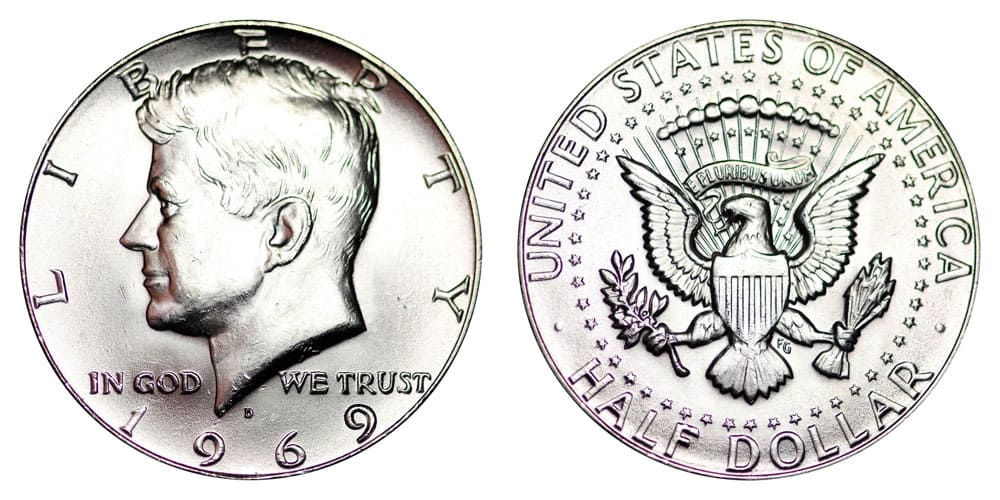 If you have a cheeky sense of humor, anything from 1969 inspires a naughty grin. But in the coin reselling space, errors are just as important as mint marks and mintage dates. So let’s look at some of the 1969 Half Dollar errors that can make your 50-cent coin more valuable.

DDO means doubled-die obverse. It happens at the hubbing stage if the die shifts between strikes. That’s why the second strike doesn’t hit at the exact same spot. This type of doubling is most visible on the words and numbers. ANACS graded this coin as MS 63, but the error is barely visible without a coin microscope or jeweler’s loupe, so it’s only worth about $20.

Until 1989, mint marks were punched by hand after all the other features on a coin had been machined into place. So re-punched mint marks (RPM) could easily happen due to unsteady coin grips. And the mint marks on Half Dollars seem inordinately tiny because the coin itself is so big! This error is worth $10 in AU 50, $20 in MS 63, and can be $35 to $40 in MS 65.

DDR means doubled-die reverse and happens during hubbing when the tails side of the die wobbles between hub strikes. As with all DDRs, the doubling effect is clearest on words and numbers, so check the TES in United States at the top of the coin. A coin microscope helps you spot this better, and the error is worth $20 in AU 50, $40 in MS 63, and $75 in MS 65.

FAQs About the 1969 Half Dollar

The 1969 Half Dollar is part of the Kennedy Series, which had only been around for a year when the coin shortage officially began. So JFK Half Dollars hardly ever entered circulation. From 1965, the silver in the Half Dollar reduced from 90% to 40% – that’s less than half! And 1969 had lower mintage numbers, with no more business strike Half Dollars coined in 1970.

Also, since everyone and their grandmother was silver stacking Kennedy coins for their melt value (as well as their sentimental attachment to JFK), these silver coins seemed pretty rare. Almost all got hoarded, so when they finally did come out of sock drawers and cigar boxes, they were in pretty good condition. Today, high-mint states aren’t especially rare or valuable.