As a great lyrical philosopher, Joe once crooned, “69 was a very good year, if you know what I mean my dear!” But RnB vocals aside, 1969 was the year of Woodstock, the Moon Landing, the Hartford Race Riots, Pelé’s 1,000th goal, and the Brady Bunch. But what was so special about 25-cent coins that year? Let’s look into this and verify the 1969 Quarter Value.

History of the 1969 Quarter

The Quarter or Quarter Dollar is a US coin worth 25 cents. And while most countries have a 20-cent coin instead, the US dollar was based on the Silver Spanish Dollar that we commonly used before developing our own local currency. This Spanish Dollar was called the 8-Reale and it could be physically sliced into 8 wedges worth 12.5 cents each, known as a Piece-of-8.

Two Pieces-of-8 were worth 25 cents, so when we started making smaller denominations, we opted for 25 cents instead of 20. Hence, the quarter was born. It was initially a silver coin, but by 1964, the silver shortage meant the mint was going at a loss by minting silver coins. The melt value was higher than the face value, so people hoarded most silver coins as bullion.

This led to a coin shortage which the mint erroneously blamed on numismatists. The Mint Director, Eva Adams, believed collectors were hiding coins based on their mint marks, so she ordered for all coins to be made without these location markers from 1965 to 1967. When this didn’t resolve the shortage, they took silver out of circulating coins including quarters.

From Silver to Sandwich – The 60s Coin Shortage

Starting in 1965, quarters were made of 91.67% copper and 8.33% nickel. These coins had three layers. The center was pure copper while the other two layers were 75% copper and 25% nickel. It was called the Johnson Sandwich after President Lyndon B. Johnson, but since the outer layer was clad, you could sometimes see the copper layer peeking through the sides.

This copper toning was especially visible on the reeds because they experienced the most wear and tear in circulation. The 1969 Quarter was a Washington Quarter. They were issued from 1932 to 1998, and even contemporary quarters have George Washington on the heads side aka the obverse. The reverse has a series of commemorative designs that keep changing.

Curiously, Washington never wanted to be on coins because that was a distasteful habit from the British Monarchy. But 200 years after his birth (and 133 years after his death), the mint honored him by placing him on the 25-cent coin. And subsequently, the reverse of this denomination has been used to celebrate important figures and events in American history.

These include the 50 State Quarters, each with its own reverse; and the American Women Quarters that honor significant American Women such as Maya Angelou, Maria Tallchief, Anna May Wong, Sally Ride, Adelina Otero-Warren, Bessie Coleman, and Eleanor Roosevelt. They still feature George Washington obverses, but it’s a new design by Laura Gardin Fraser.

Features of the 1969 Quarter

A lot happened in 1969, both good and bad. But the physical appearance of the 1969 Quarter hadn’t changed much from the previous years. It still had the Flanagan design and the clad composition. But in case you’re unfamiliar, we’ll describe the key characteristics of the coin.

The Obverse of the 1969 Quarter 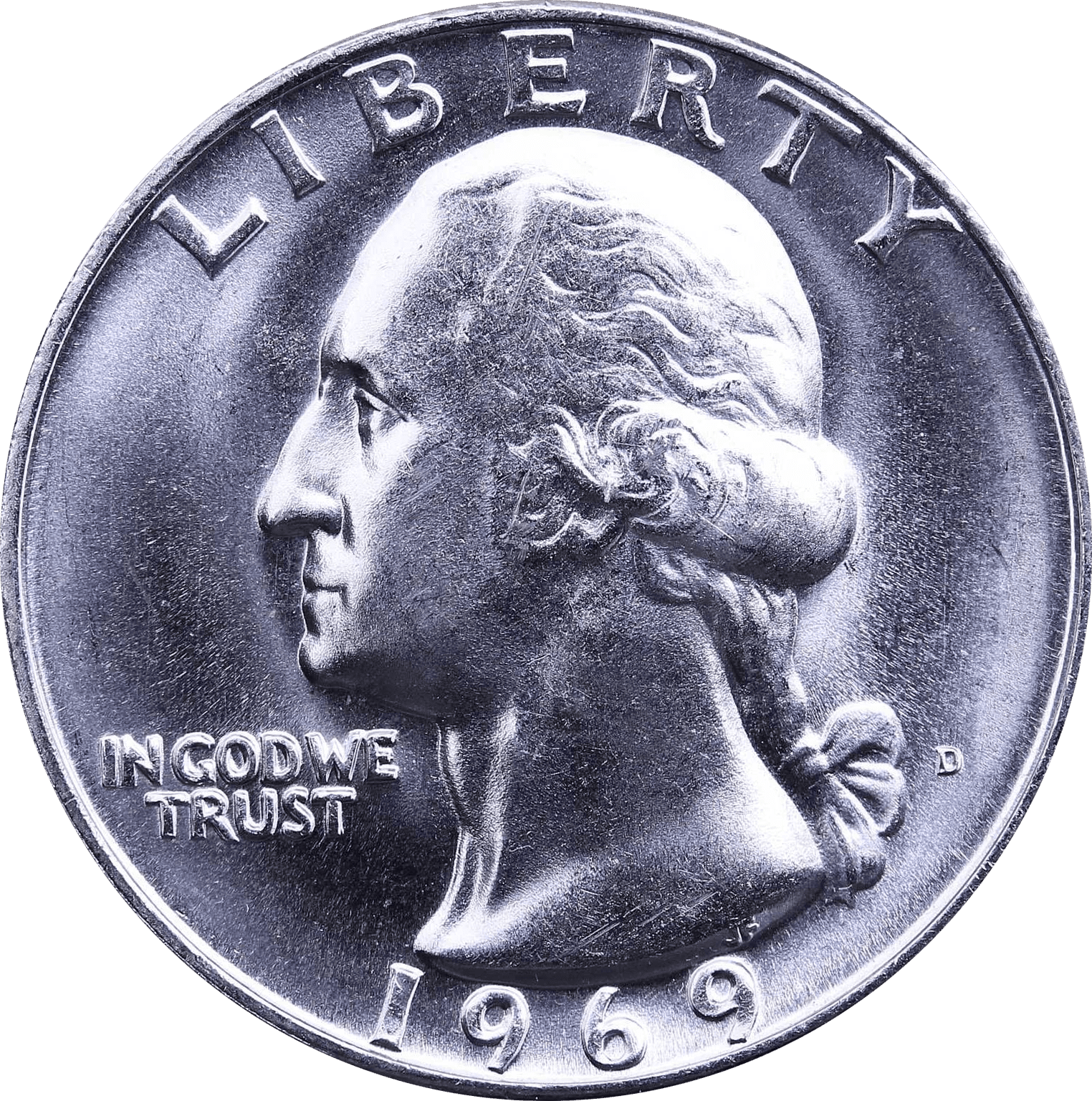 The obverse (heads side) of the 1969 Quarter features a portrait of George Washington facing left. It only shows his head, neck, and ponytail, with the mint mark right next to the ribbon in his hair. The mintage year is at the bottom of the coin under his neck, and the neckline cut-off has a stylized JF for the designer, John Flanagan. The coin also has two legends on it.

At the top, it reads Liberty, and on the right, near his Adam’s apple, it reads In God We Trust. Washington would probably be displeased to have his face on a coin because he felt it was too imperial. But he was also a very democratic man so he would likely have accepted the will of the people. We first put him on the coin in 1932 to mark 200 years after his birth.

The Reverse of the 1969 Quarter 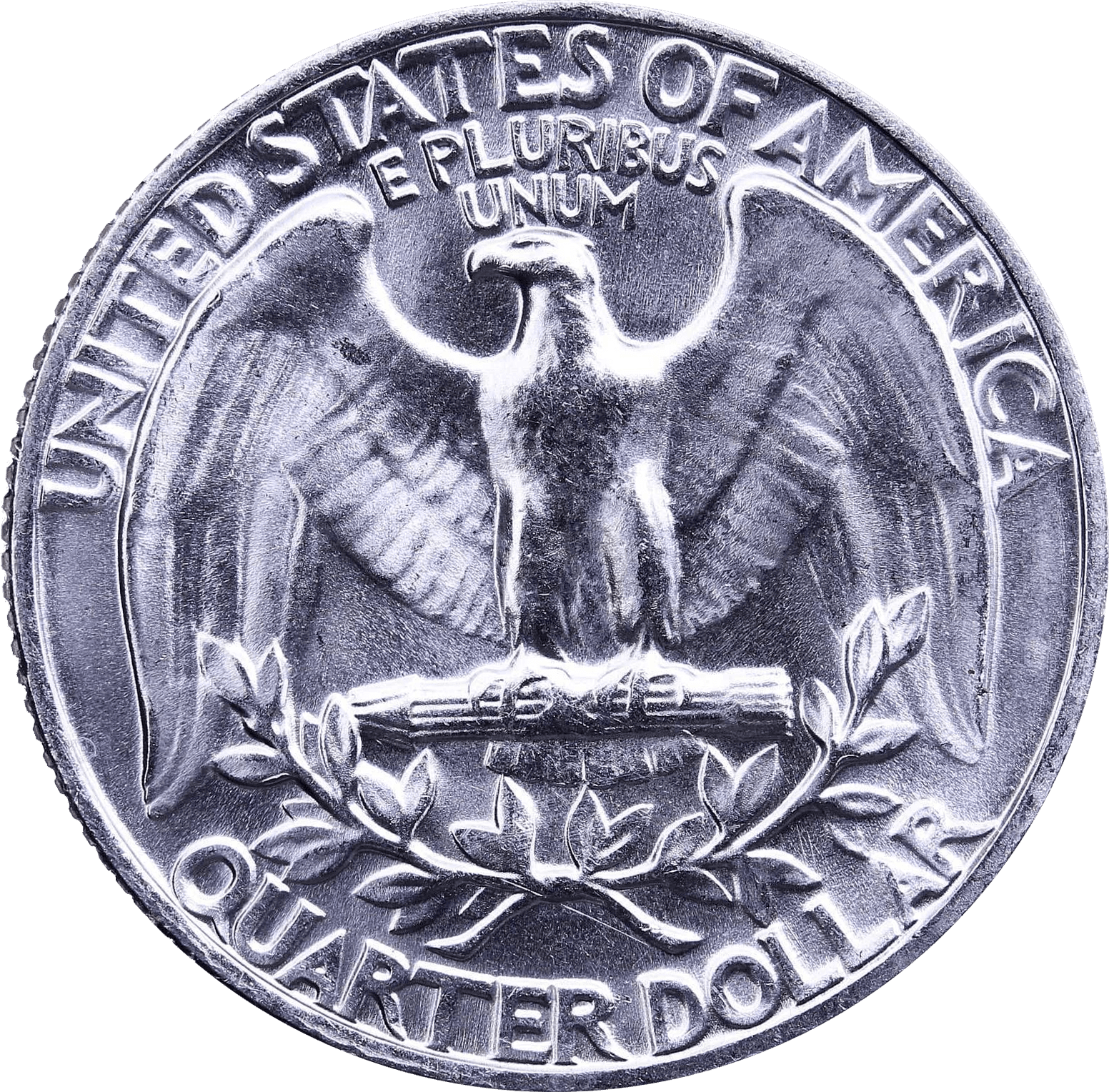 The reverse (tails side) of the 1969 Quarter features an eagle holding 13 arrows in its talons. The arrows represent the first 13 states of the union, and beneath the arrows are two olive branches. At the top of the coin, United States of America is stamped along the rim, followed by E Pluribus Unum above the eagle’s head. The bottom of the coin reads Quarter Dollar.

Other Features of the 1969 Quarter

In 1969, the Quarter was a clad coin with a pure copper core and cupronickel casing. This brought its combined metal composition to 91.67% copper and 8.33% nickel. It was 24.3mm in diameter and 1.75mm thick, weighing in at 5.67g. The coin has a reeded edge with 119 reeds. If you find a 1969 Washington Quarter that weighs less, it may be a valuable error.

Regarding mint marks, let’s talk about proofs and SMS. They both have a mirror-like sparkle, but their minting process is different. The planchets for proof coins are polished before punching, so they take on a burnished appearance. They’re struck multiple times, and the dies are also chemically treated to heighten their shimmering field and frosted devices.

The glossiest ones are graded Deep Cameo or Ultra Cameo while the next hundred or so are Cameo, once the sparkle starts to fade. On the other hand, a circulating coin may have the shine of a proof, but if it’s not made with special dies and planchets, it’ll be graded PL or DPL for proof-like or deep proof-like. Some Uncirculated Mint Sets can be just as shiny as proofs.

But because they’re special mint sets, the planchet isn’t pre-burnished and the coins are only struck once at high pressure. These coins are sold in sets that have one sample each from all the circulating coins and mints. A 1969 mint set would have a (P), D, and S coin from 1969, and might be graded PL or DPL in the wild. Let’s look at the individual values of each mint. 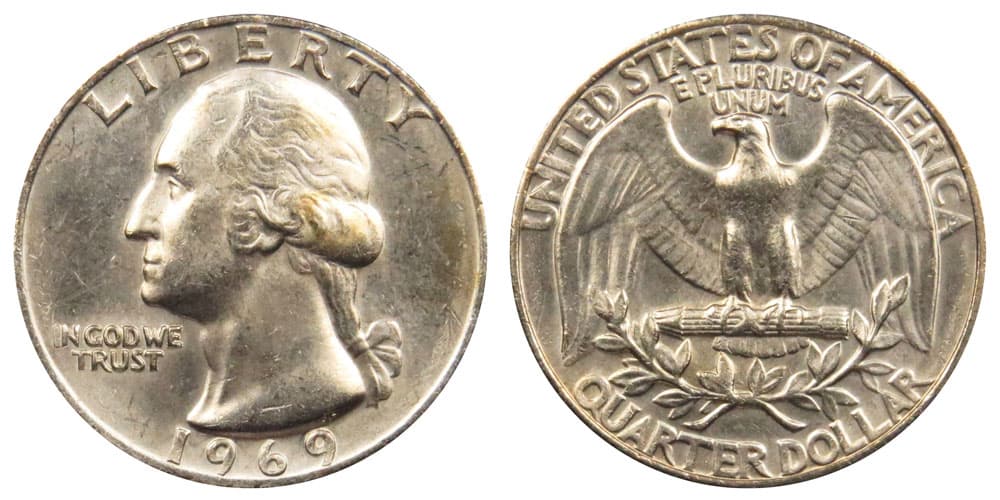 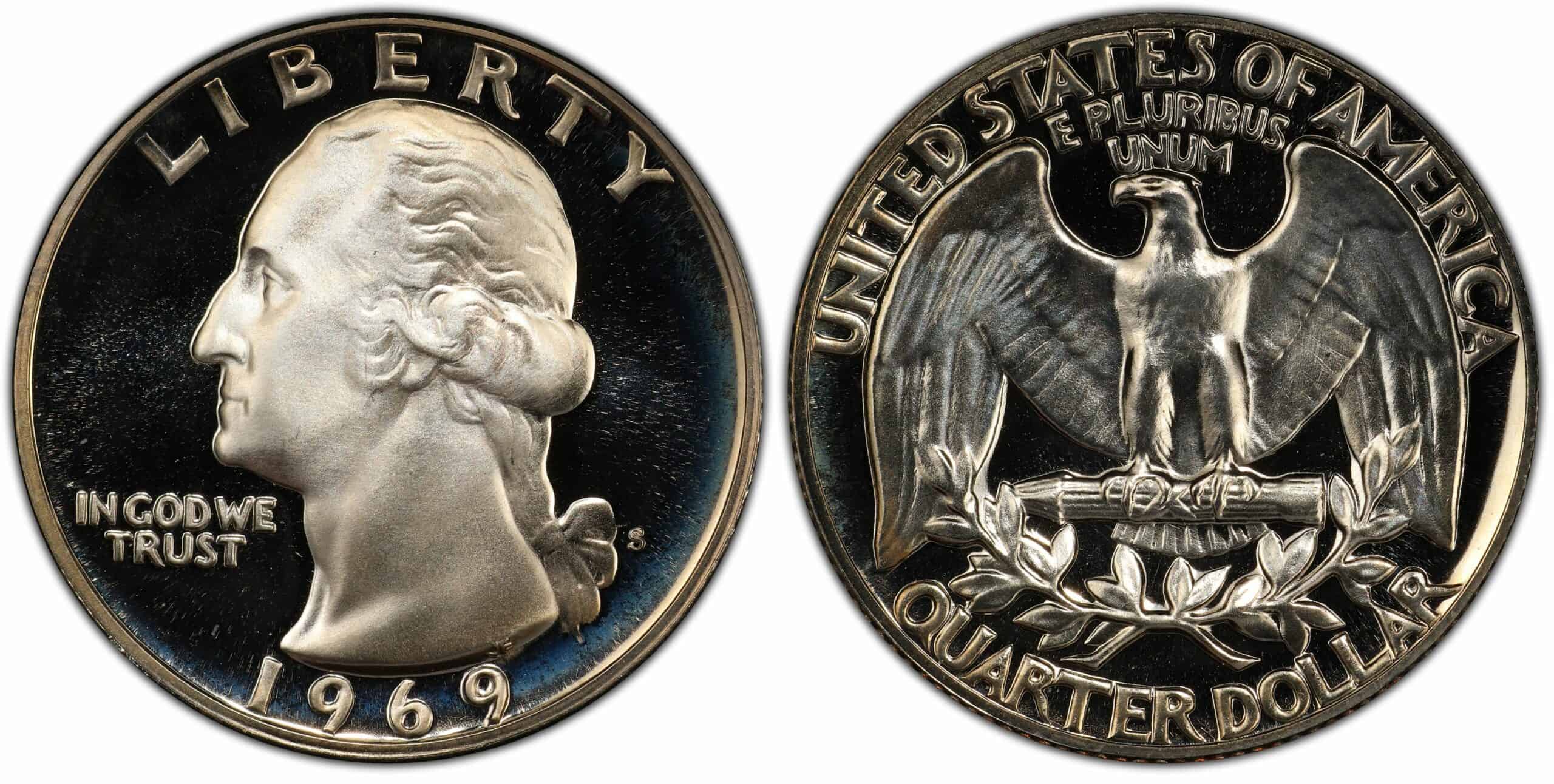 The San Francisco Mint made 2,934,631 Proof Quarters in 1969. And while proof quarters are pretty and eye-catching, they don’t sell as well as circulating coins. This is because they’re all kept pristine, so almost every coin is in excellent condition and you’re unlikely to find one in a coin roll. A PR 69 DCAM once sold for $870, but another sample sold for $1,410 in 2013. 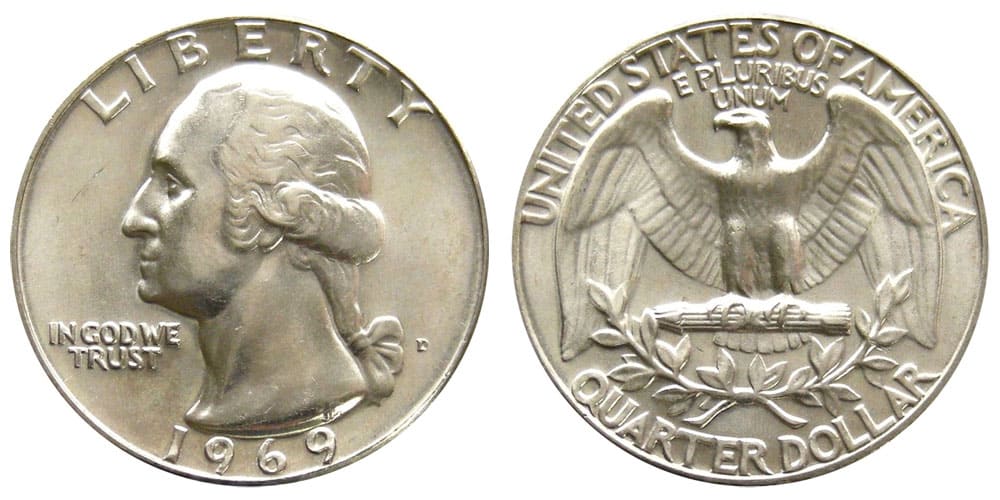 Mint errors can raise the value of a coin way beyond its face value, and different mistakes earn various premiums. But first, let’s refresh the jargon. A planchet is a blank metal disc that gets stamped to make a coin. And errors are defined by where they occur on the coin, whether it’s the obverse, the reverse, or both sides of the coin. Let’s explore a few flaws.

Planchet sheets don’t just dictate the size of the coin. They define its metal composition as well, so a quarter struck on a 1c planchet would be smaller and lighter. This 1969 (P) Quarter should weigh 5.67g. But because it’s struck on a 1c planchet, it weighs 3.11g and has the word Liberty sliced off. In MS 65 BN, it sold for $805. And for the record, that BN means brown.

Coins struck on 1c planchets are pretty common, so here’s another sample from the Denver Mint. For reference, pennies are graded as RD for red, RB for reddish-brown, or BN for brown, with RD as the best color grade. So this coin graded MS 64 RD earns more than the previous one even though the whole of Washington’s head remains intact. It went for $1,483.

ANACS and PCGS rate their proof coins as PR while NGC rates them as PF, but it’s the same thing. Also, PCGS coins tend to fetch higher prices than the other two, just so you know. That said, a mated pair error comes as two separate coins. It occurs when two blanks are fed into the machine at the same time, so each one gets half the design. In PF 67, it’s worth $2,760.

Because proof coins are so cute and shiny, we assume they’d have fewer errors. But if the die shifted between hub strikes, that same flaw will transfer onto every coin made with that die. This is called a variety, and the 1969 DDO Variety (double die obverse) is visible on Liberty and on the date. In PR 67, this coin error sold for over $300. Not bad for a 25-cent coin!

1969 Quarter Struck on a Nickel Planchet

Sending a coin to NGC or PCGS for grading costs at least $30 before shipping, so unless you’re sure it’s in mint state, it may not be worth the cost. A cheaper idea is to confirm the error and then sell it on eBay. Still, one 1969 Quarter struck on a 5c planchet and graded MS 65 sold for $129.50. Spot the error by weighing the coin (it was 4.9g) and checking its diameter.

When coins are being minted, the planchet sheet is punched into discs of the right diameter. These discs are then loaded into a hopper and automatically fed into the machine. Two might be accidentally fed at the same time to cause a mated pair, or a truncated fragmented might be pressed by the die. This 2.01g fragment was partially stamped. In MS 62, it’s worth $240.

FAQs About the 1969 Quarter

Where can I find a reputable coin dealer in the United States.