Wondering if your 1967 Kennedy half dollar is worth anything? You’ve come to the right place.

We’re going to look at the 1967 half dollar value and find out what makes one of these coins collectable. We’ll also explore their interesting history and design. And lastly, we’ll find out about some of the error coins that are known to exist, and just how much they’re worth.

History of the 1967 Half Dollar

The half dollar as a coin denomination has existed since the end of the eighteenth century. The first coins were struck in December 1795 and bore the image of an eagle, emblem of the USA.

Fast forward almost 200 years, and the half dollar minted in 1967 is one of the series known as Kennedy half dollars. They take their name from the man who appears on their obverse, President John F. Kennedy.

Kennedy dollars were first produced in 1964. They honored the 35th president. But unlike other coins paying homage to past presidents, in this case the coins didn’t mark the anniversary of his birth. Instead, they were a memorial.

Congress authorised the coins a month after Kennedy’s assassination in 1963. The Mint engravers Frank Gasparro and Gilroy Roberts had already produced designs, allowing the new coins to be prepared quickly. The first were struck just two months after Kennedy’s death.

Three denominations were originally in the running to honor Kennedy – the quarter dollar, half dollar and dollar coins. The decision was left to his widow, Jacqueline Kennedy. She chose the half dollar rather than displace Washington on the other two coins.

The rising silver price was also affecting dimes and quarters. They too were being hoarded in the expectation that their silver might soon be worth more than the coins’ face value.

In 1965, Congress took action. The silver content was eliminated from dimes and quarters. And for the Kennedy half dollar, it was reduced from 90 per cent to 40 per cent.

1967 half dollars, then, are made of 40 per cent silver. Things were to stay that way until 1970. But the coins were still being hoarded, and in 1971 the silver was removed from this denomination too.

By then, people were more used to collecting than using half dollars. And while use increased slightly when cupronickel replaced silver altogether, they were still unpopular as an everyday coin. Many half dollars were also returned when gaming machines switched to coinless operation.

As a result, the Mint and government found themselves with large reserves of half dollars. And from 2002 onwards, only a small number of coins have been struck each year for collectors.

Features of the 1967 Half Dollar

The Obverse of the 1967 Half Dollar 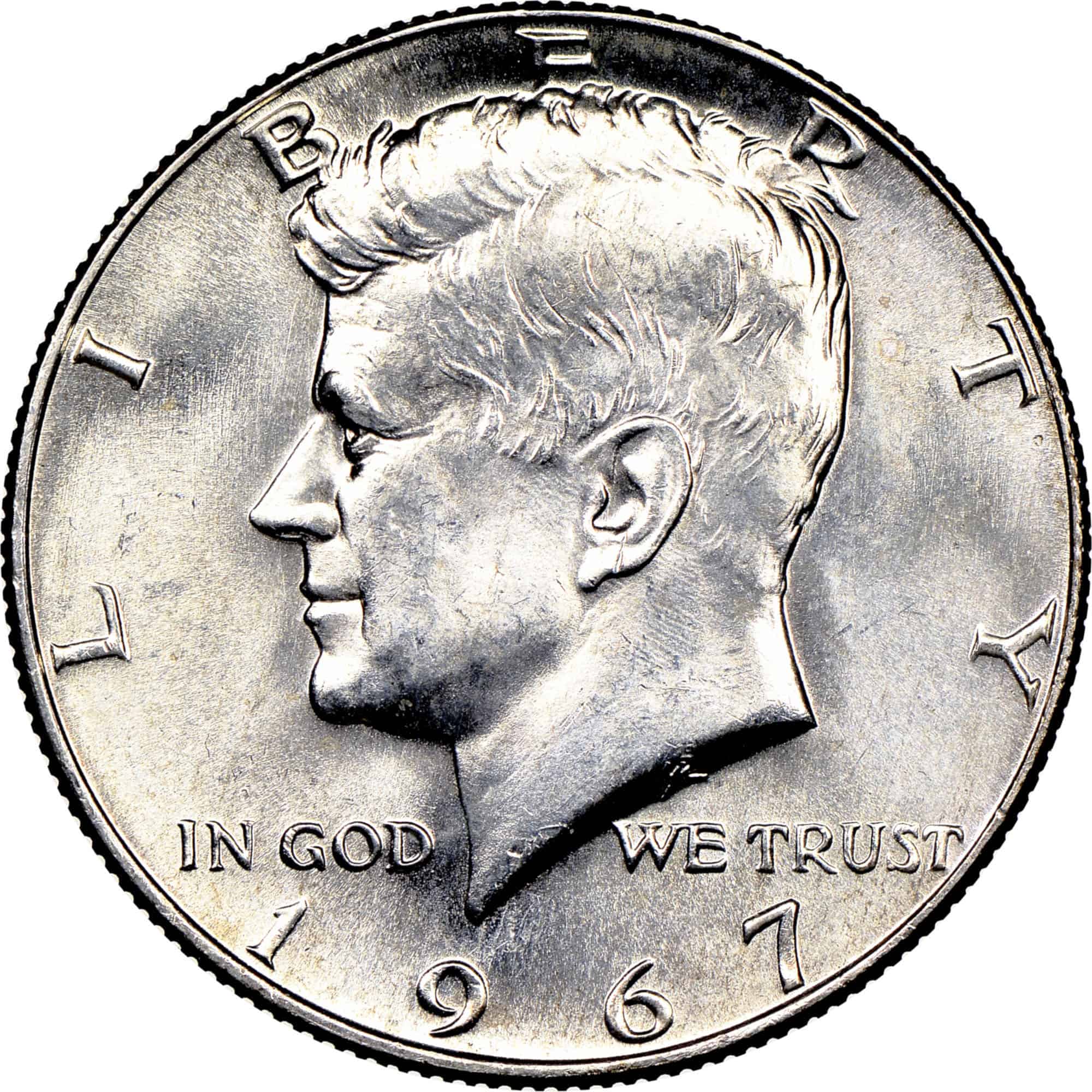 The obverse of the 1967 half dollar shows John F. Kennedy in profile facing left. To prepare the coin quickly, the design was based on one that already existed. The Mint engraver Gilroy Roberts had crafted a portrait of Kennedy that had been used in the Mint’s Presidential Series of medals.

Roberts had met Kennedy in person to show him early drafts of the portrait. Its subject hadn’t expressed an opinion on it, but Roberts nevertheless made some changes after the meeting.

The final image used in the Presidential Series had been approved by Kennedy himself. And Roberts amended it only slightly for use on the new half dollar. The version prepared for the coins showed Kennedy with a slight smile in place of the more neutral expression on the medal.

The Mint produced trial strikes, and Jacqueline and Robert Kennedy were invited to view them. The former First Lady expressed approval, whilst also suggesting a change to the depiction of her late husband’s hair.

Kennedy’s portrait dominates the coin. His hair obscures the lower edges of the “B”, “E” and “R” of “LIBERTY”, which curve along the top of the coin. Roberts’ monogram appears discreetly on the lower edge of Kennedy’s neck.

The motto “In God We Trust” appears towards the bottom, two words on each side of Kennedy’s neck. The date follows the curve of the lower coin edge.

The Reverse of the 1967 Half Dollar 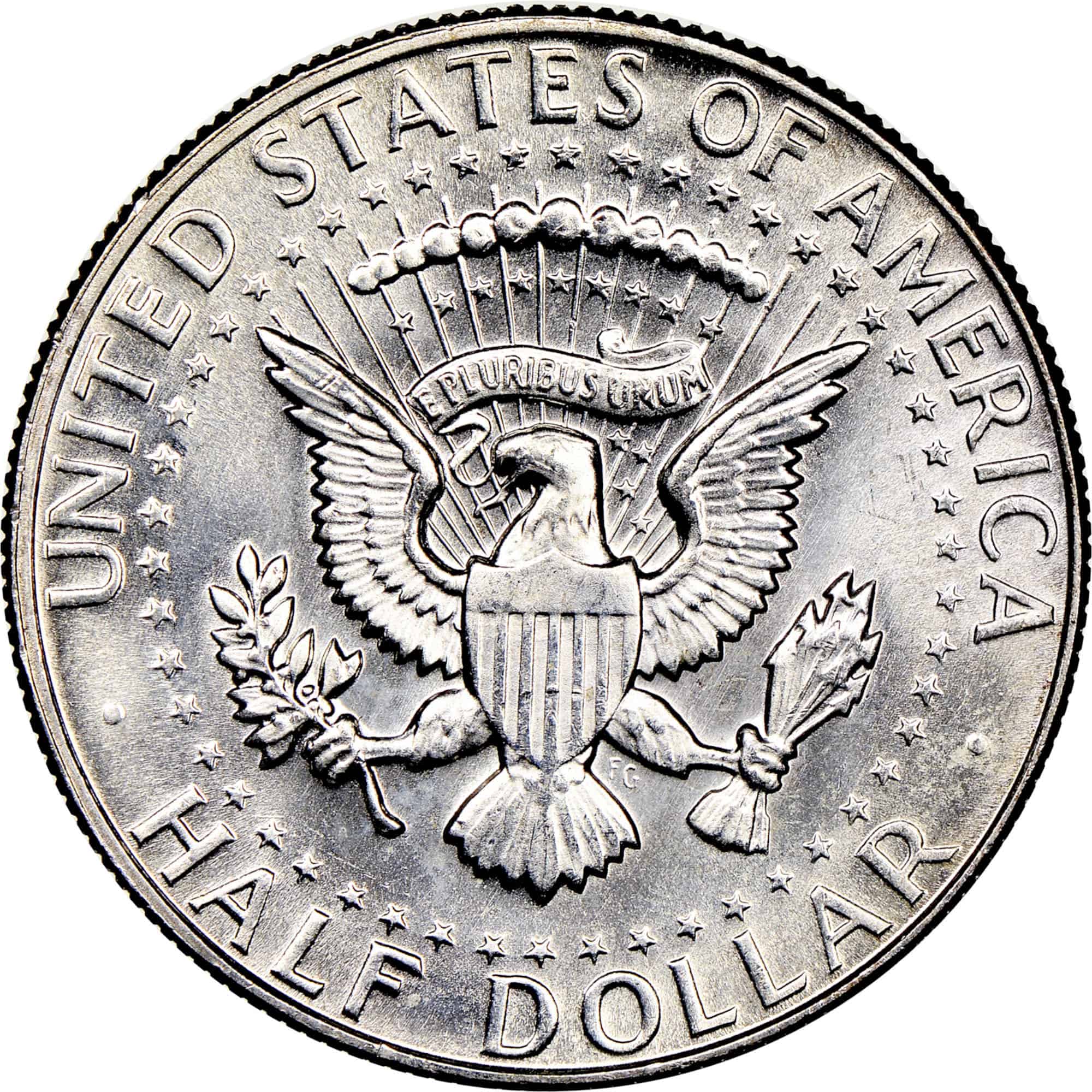 The image on the reverse (or “tails” side) of the 1967 half dollar was also taken from a pre-existing design. In this case it was the work of Frank Gasparro, then Assistant Engraver at the Mint. (He would succeed Gilroy Roberts as Chief Engraver a month after the Kennedy half dollar was launched.)

Gasparro’s design had also been used originally for the Kennedy medal in the Mint’s Presidential Series. It had been developed further for a Kennedy Appreciation Medal, produced in 1962.

It shows the Presidential Seal, a heraldic eagle and shield. In one set of talons the eagle clutches a sprig of olive, in the other a fletch of arrows. The image is surrounded by stars, representing the states. Gasparro’s initials appear under the eagle’s right leg.

Above the eagle’s head is a banner with the Latin motto “E pluribus unum”. This means “From the many, one”, referencing the union of the states.

The words “UNITED STATES OF AMERICA” curve along the top edge. The denomination, “ONE DOLLAR”, curves along the bottom.

Other Features of the 1967 Half Dollar

Kennedy half dollars were struck only in Philadelphia. Philadelphia didn’t use mint marks on any of its coins until 1979. As a result, you won’t find a mint mark on either side of the 1967 half dollar.

Each coin is 30.61 millimeters in diameter. Its edge is decorated with 150 “reeds” – vertical grooves which run perpendicular to the coin faces.

This YouTube video from DC Coin World looks at the history of the Kennedy half dollar from 1964 to 2021. 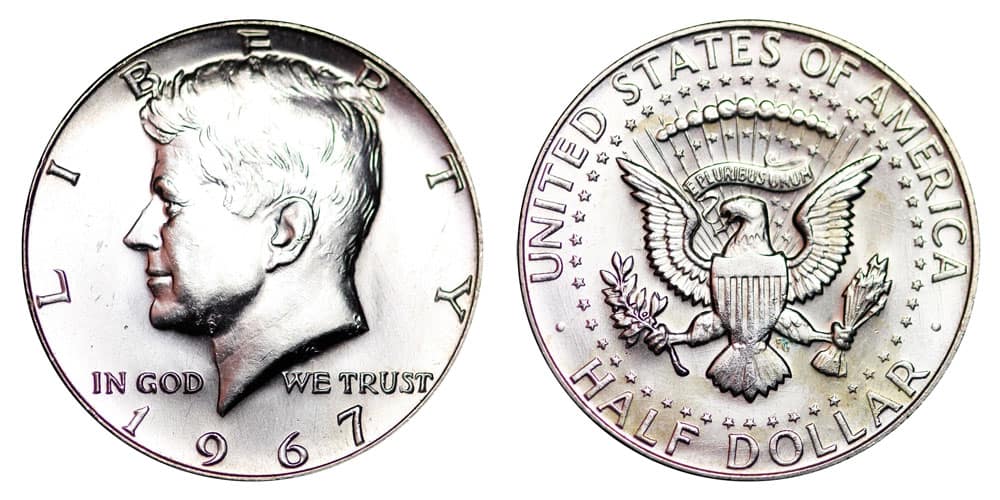 All half dollar coins have an intrinsic value, because of their silver content. And even circulated coins can be worth much more than their face value.

Coins are graded from 1 to 70, depending on their quality and condition. A 1967 half dollar graded extremely fine – XF45 – will be worth around $5.

Those values might sound modest. That’s because the Kennedy half dollars were seen as collectors’ items from the moment they were minted. As a result, people stored them with care. And with over 295 million half dollars minted in 1967, they’re still easy to find.

Today, the PCGS has graded seven coins at this level, and values them at $5,500 each.

No proof Kennedy half dollars were struck in 1967. But collectors looking to get their hands on prime coins could buy what was known as a Special Mint Set (SMS). These contained a single example of every denomination from that year.

1.8 million SMS half dollars were struck in 1967. All of them were minted in Philadelphia. And because they were targeted at the collecting market, they’re even more likely than business strike coins to have survived in excellent condition.

That means it’s possible to find a beautiful coin without having to spend much money. Prices are generally lower than business strike coins at equivalent grades.

SMS coins are worth more if they’re designated cameos or deep cameos. The designation is awarded to coins that have a pleasing contrast between reflective fields and frosting on the raised parts of the design. For a coin to be a deep cameo, that contrast must be particularly strong. 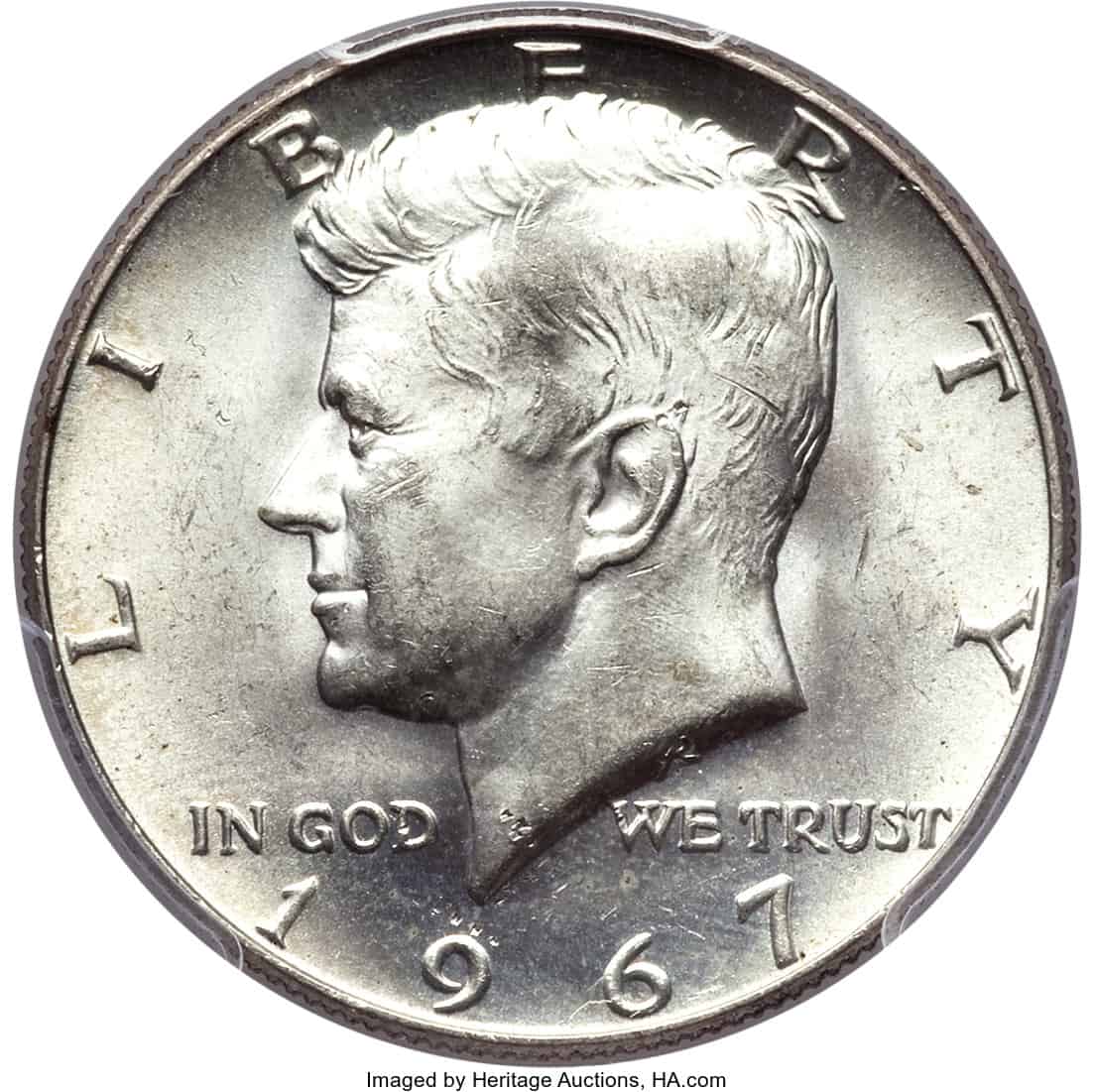 Double die errors happen when there’s a problem making the die that strikes the coins. The die has to be struck repeatedly to capture every detail of the design. And if it moves – however slightly – between strikes, a double image is created. That’s then transferred to the coins struck with the die.

There are two different varieties of double die errors on the obverse of 1967 half dollars. They’re coded FS-102 and FS-103.

Look for evidence of the doubling on the letters of “LIBERTY”, especially the “I” and the “B”. And it’s also on the motto “IN GOD WE TRUST”, particularly clear in the word “GOD”. An MS64 example of the FS-102 variety, the finest quality known to exist, sold at auction in 2016 for $2,115.

The 1967 Kennedy half dollar also has a double die error on the die used to strike the reverse. This variety is coded FS-801. And here, you want to look for doubling on the stars that surround the eagle.

Even coins produced for Special Mint Sets sometimes have errors. And in the case of the 1967 half dollar, there’s a quintuple die obverse. The code for this is FS-101.

The exact nature of the doubling on the coin here is the subject of some debate. Some numismatists claim that the image is quintupled (i.e. there are five separate images), some that it’s sextupled (i.e. six images). Whatever the answer, it’s most obvious on the right-hand side of the coin.

You’ll need a loupe or microscope to see it. Look first at the left-hand edge of the “B” in “LIBERTY”. The multiple images can also be seen on the upper left serif of the “E”, at the foot of the “T”, and the serifs of the “Y”. It also appears on the crown of Kennedy’s head, the “7” of the date and the words “WE TRUST”.

Check out this YouTube video from Couch Collectibles to see examples of 1967 half dollar error coins.

Almost 300 million half dollars were struck in 1967. So although almost six decades have passed, this isn’t a rare coin.

There are rarer examples though. Business strikes in gem quality grades are harder to find and more valuable. And there are some interesting and rare error coins too.

You’ll be looking a long time before you find the mint mark on a 1967 half dollar. That’s because they were all struck at the mint facility in Philadelphia. And Philadelphia didn’t add a mint mark to any of its coins until 1979.