1966 was an unusual year for pennies. As well as the coins that bear that date, most of the pennies dated 1965 were actually minted in 1966 too.

Here, though, we’re going to focus on the 1966 penny value. By that, we mean the one with the date “1966” on the obverse. And along the way, we’ll find out some interesting facts about the coin, as well as the error coins available.

The penny struck in 1966 is a type known as the Lincoln penny. The 1 cent coin had borne the image of the former president on its obverse since 1909. And the portrait that appears on the 1966 coin is essentially unchanged.

The reverse, though, had changed in 1959. The year marked 150 years since Lincoln’s birth. And to celebrate, the old design – a simple image of two ears of wheat – was replaced with a depiction of the Lincoln Memorial.

There was another key difference between the 1966 penny and its earlier incarnations too. The metal composition of the original Lincoln pennies was 95 per cent copper, with the remainder being tin and zinc.

There was a brief change to steel pennies in 1943, to release copper for the war effort. After that, the composition returned to 95 per cent copper. But from 1962, the tin content was removed. 1966 pennies, then, are 95 per cent copper and 5 per cent zinc.

1964 saw the rising price of silver leading to coins being hoarded. And with fewer coins for change circulating, the hoarding soon spread to copper coins, including the humble penny.

The Mint’s director, Eva Adams, felt that the problem was being exacerbated by coin collectors removing pennies from circulation. She therefore decreed that mintmarks should no longer appear on coins to designate where they had been struck.

We know that over 811 million 1966 pennies were struck Philadelphia, which never used mintmarks anyway. Over 991 million were struck in Denver, and over 383 million in San Francisco.

But with no mint marks appearing on the coins, there’s no way to tell them apart. Mint marks were eventually restored to Lincoln pennies in 1968.

No proof coins were minted between 1965 and 1967 either. Instead, over 2 million cons were produced for “Special Mint Sets” destined for collectors. These sets contained one coin of each denomination and had a special satin finish. They were all produced at the San Francisco mint.

The Lincoln penny is still being minted today. The reverse now features the design of the “Union shield”. This was introduced in 2010 and marks Lincoln’s achievement in maintaining the union of the states. The obverse of the penny minted in 1966 bears the same bust of Abraham Lincoln that has appeared on cents since 1909. Lincoln is shown in profile, facing to the right.

It was designed by Victor David Brenner, who based his portrait on a photograph of the late president taken at the studio of Matthew Brady. It was the first time a portrait of a real person had appeared on American coins.

There had originally been controversy over the size of Brenner’s initials, which had appeared on the reverse of the coin. These were soon deleted but restored in 1918, this time on the obverse. You can spot them on the lower edge of Lincoln’s shoulder.

The motto “In God We Trust” appears above Lincoln’s image. The word “Liberty” is on the left, just level with the nape of the president’s neck. On the right of the portrait, a little lower down, appears the date. The reverse of the 1966 penny carries the image of the Lincoln Memorial in Washington DC. It’s the same image that you’ll find on all Lincoln pennies from 1959 to 2009. It was then replaced with a series of four different reverses marking the bicentenary of Lincoln’s birth.

Look closely, and you can see the outline of the statue of Lincoln at the center of the portico. So these coins carry the image of the same person on both the obverse and reverse. The 1959 Lincoln penny was the first US coin to do this.

The image of the Lincoln Memorial was the work of the Mint’s then Assistant Engraver, Frank Gasparro. By the time the 1966 penny was struck, Gasparro had become the Chief Engraver, taking up post the previous year.

Around the top of the coin, the words “United States of America” follow the curve of the edge. Beneath them is the motto “E pluribus unum”. It’s Latin for “From the many, one” and refers to the union of the states as a single country.

The denomination, “One cent”, curves along the bottom edge of the coin.

Other Features of the 1966 Penny

The lack of mint marks on any coins makes the 1966 penny rather unusual. While coins struck at the original mint facility in Philadelphia never had mint marks, 1966 pennies were struck in San Francisco and Denver too. These would usually have been identified by an “S” or a “D” respectively.

As a copper coin, 1966 pennies also appear in a number of different shades. Copper changes color from red to brown as it’s handled and exposed to the air.

A coin with at least 95 per cent of its original red tone is graded red (RD). Those that are at least 95 brown are graded brown (BN). And those that are somewhere in between are red-brown (RB).

All other things being equal, red coins are more desirable – and hence valuable – than their red-brown or brown counterparts.

This YouTube video from CoinOpp looks at all the modern Lincoln penny designs. 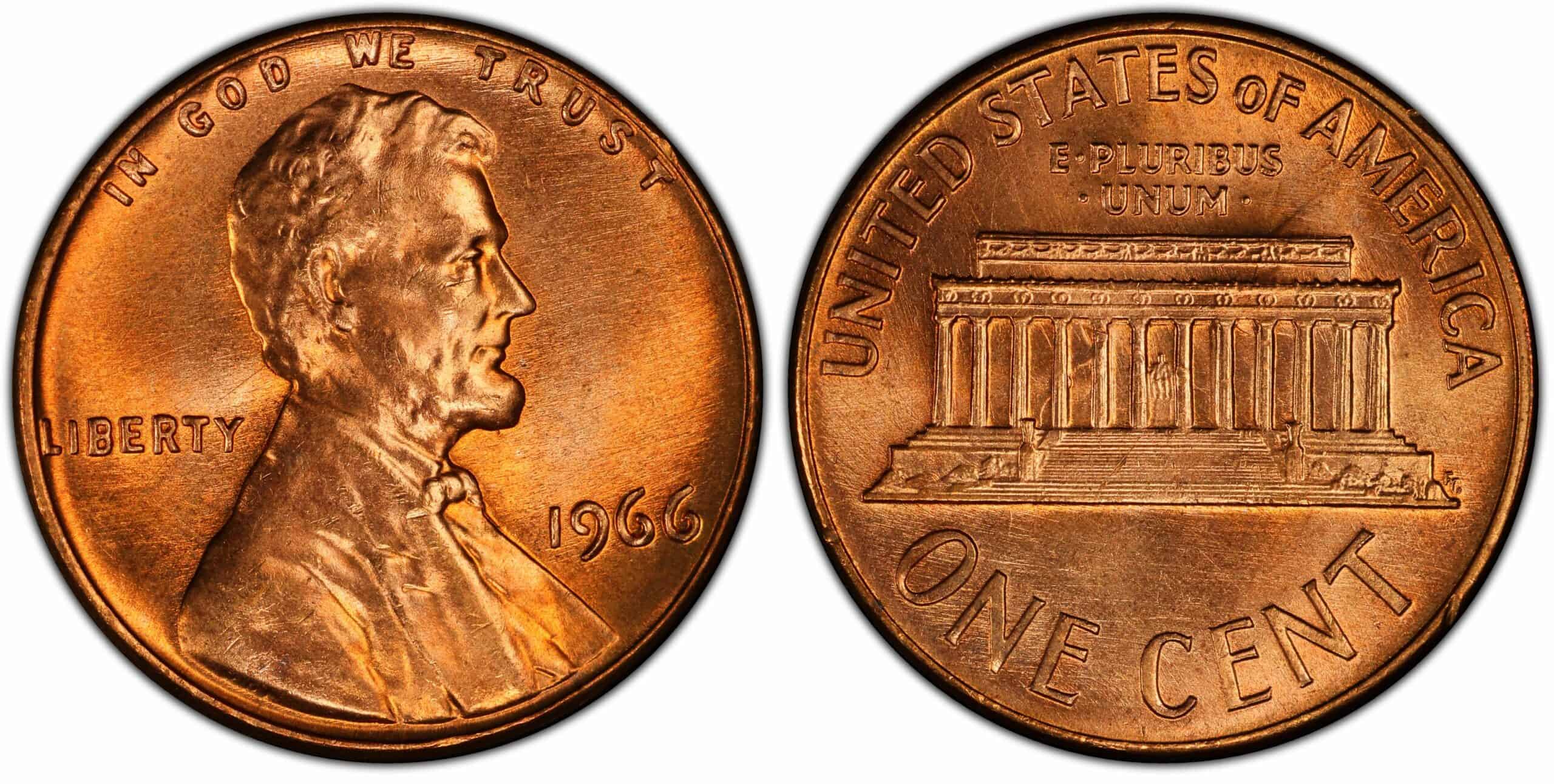 Far fewer 1966 pennies were struck at the San Francisco mint facility than at Philadelphia or Denver. But with no mint mark to identify them, it’s impossible for collectors to find them.

So when it comes to this coin, the mint facility can’t influence its value. Instead the key factors are condition and color.

Red pennies are the most valuable. They must have at least 95 per cent of their original red copper color on both sides. And to be designated red at the highest grades (MS69 or MS70), that color must be rich and deep. A little mellowing is allowed at MS67 and MS68.

Circulated coins, by definition, won’t be designated red. That’s because they’ll have been handled in everyday transactions, changing the color. And they’re generally only worth their face value.

Mint state red coins, however, are worth considerably more. A coin graded MS63 is valued by the independent coin graders the PCGS at $7. That rises to $18 at MS65. 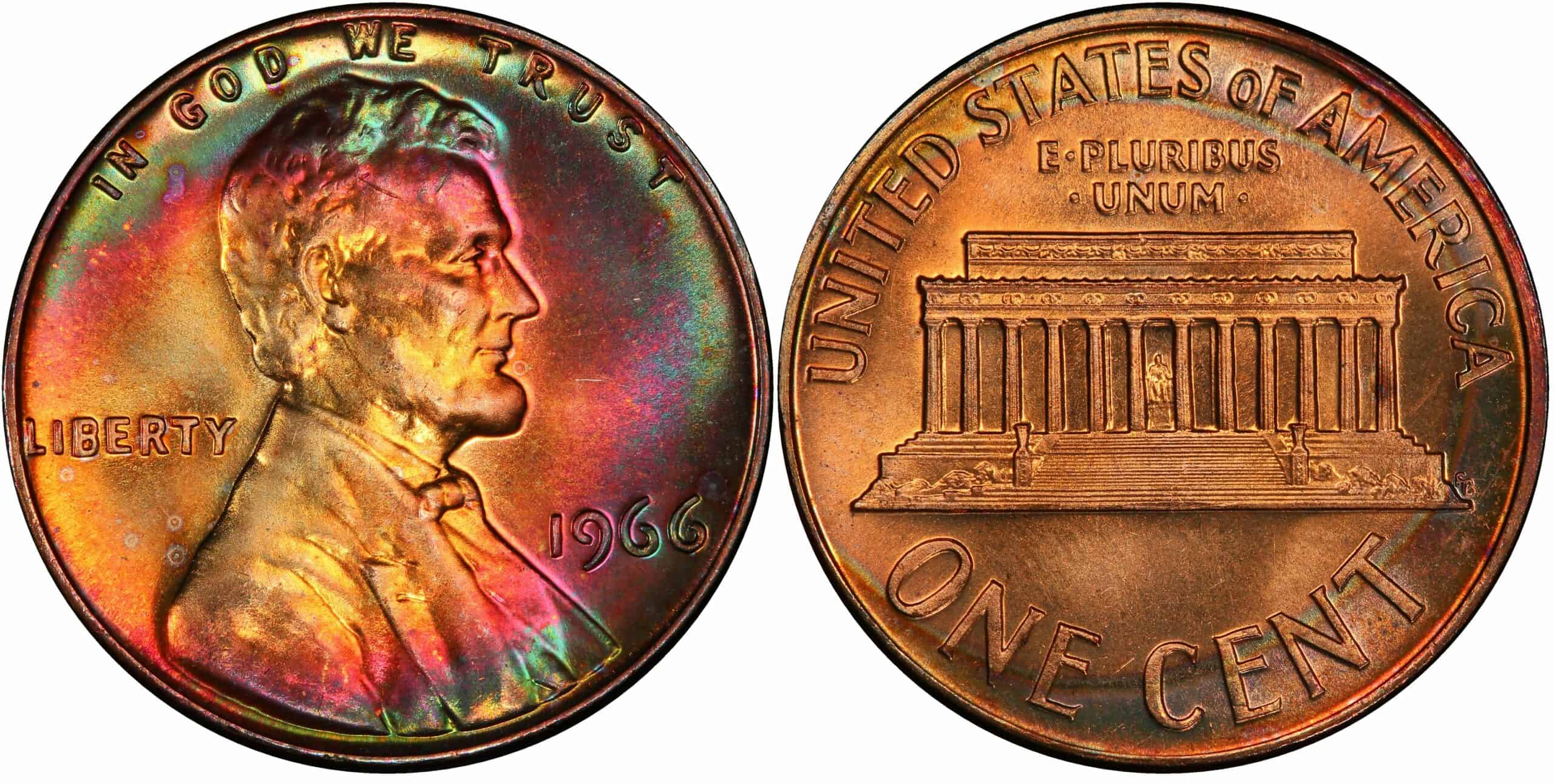 If your 1966 penny is red-brown, it will usually only be worth around its face value in circulated grades. But if you have a mint state example, that changes.

An example at MS63 is only slightly less valuable than a red coin at the same level. The PCGS values it at $6, as against $7 for red. At MS65, a red-brown coin is valued at $10. The finest examples graded by the PCGS are MS66. They’re valued at about $20.

Every now and again, though, a coin crops up for which collectors are willing to pay much more. That was the case for a coin graded MS65 RB, but which had striking rainbow toning in neon colors. That set an auction record in 2022, when it was sold on eBay for $200. 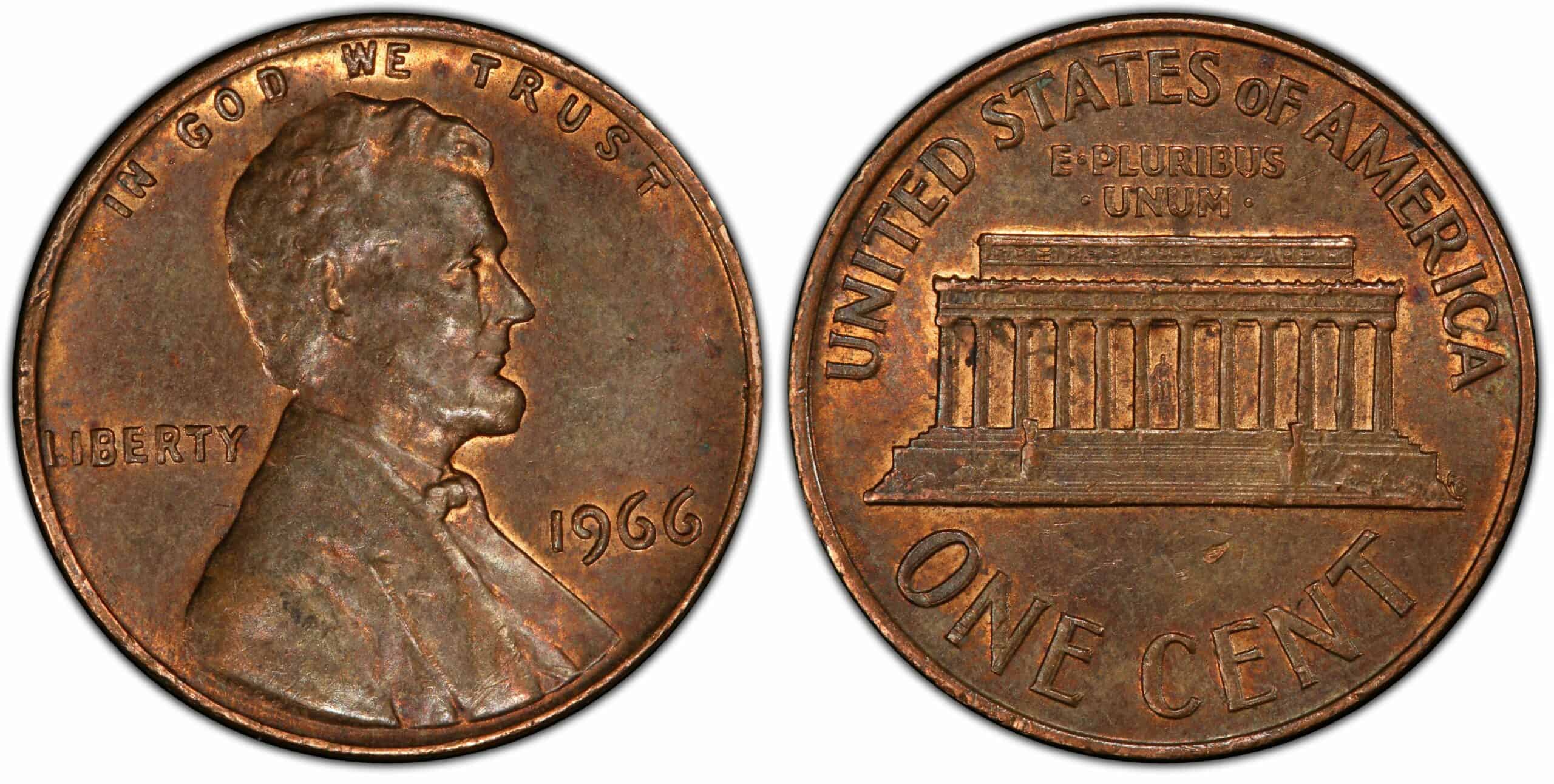 As with red-brown coins, most brown 1966 Lincoln pennies will be worth only around their face value. The highest graded coins aren’t likely to be designated brown. So that leaves only a small window for brown 1966 pennies to command higher prices.

A coin graded at MS65 is valued at about $2. Error coins, however, may be brown, and they can be far more valuable. We’ll look at those later. 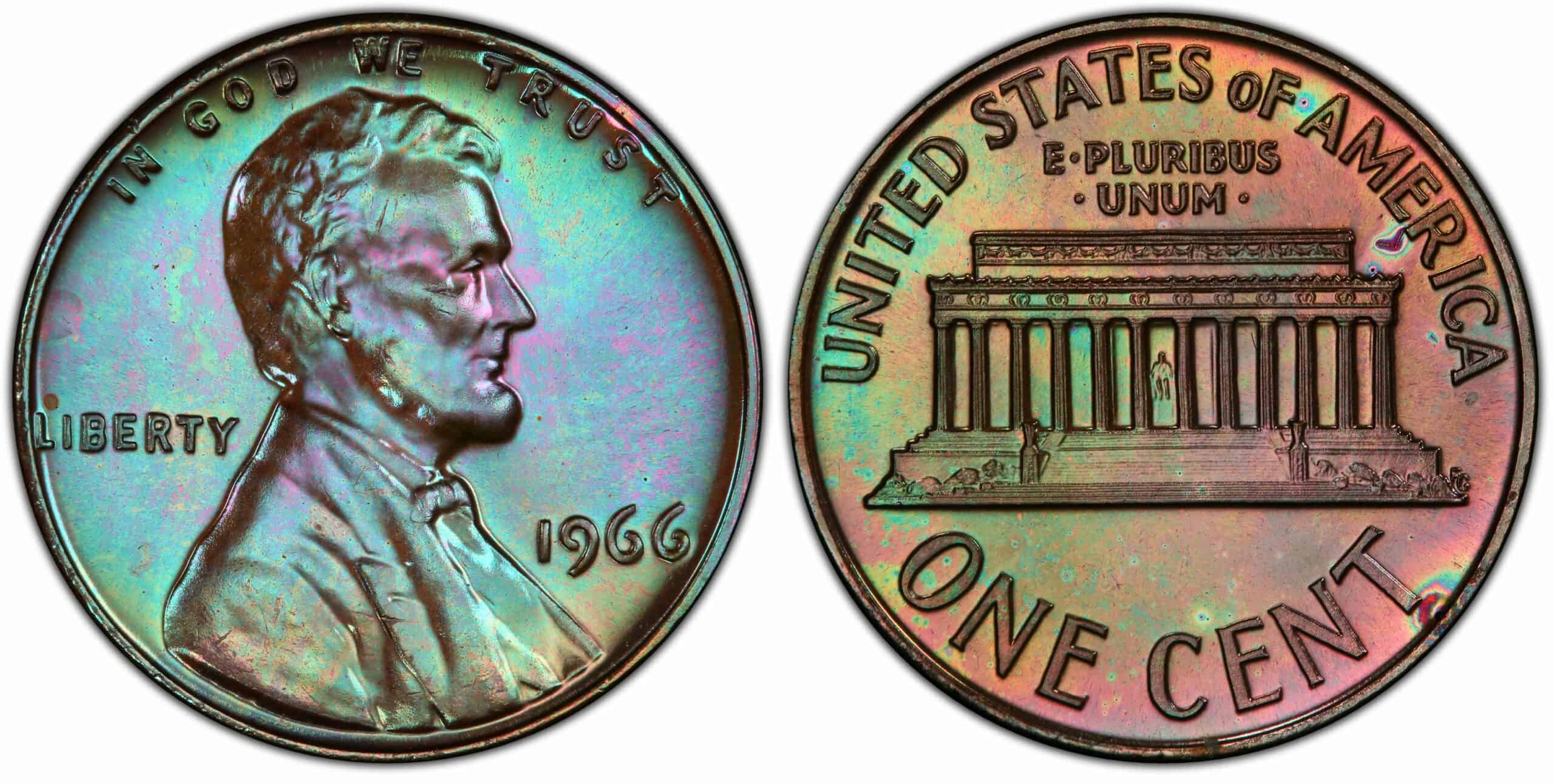 In 1966 the San Francisco mint struck over 2 million Lincoln coins for Special Mint Sets. These were produced specially for collectors, in the absence of any proof or uncirculated coin sets.

They can be distinguished from other Lincoln pennies by their satin finish. And because there are many more of them at high grades than mint state red pennies, their prices are generally lower. An MS65 RD SMS is valued at $10, while at MS67 the value is a modest $28.

But special strike coins can be far more valuable if they’re designated as cameos or deep cameos. These are coins with an attractive contrast between reflective fields and frosted designs. 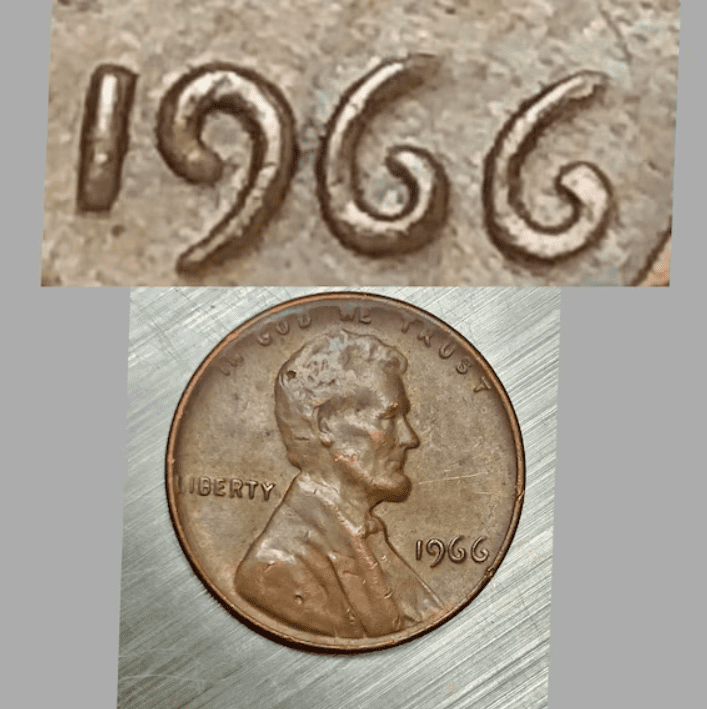 The 1966 penny has double die varieties on both the obverse and reverse. Double die errors occur while the die was being made, creating a double image. That’s then transferred onto the coins when they’re struck.

Look for evidence of the error in the 1966 penny around the date. The “1” is fatter at the top than the bottom, and its lower edge is on a diagonal. The doubling is also visible on the motto, particularly on the word “Trust”.

A double die obverse coin in mint state and graded red is worth good money. At MS60, the PCGS values it at $240, rising to $615 at MS64. And even in extremely fine to about uncirculated condition, coins will fetch between $50 and $100.

Some 1966 pennies show evidence of an error on the reverse die. Here the evidence of doubling appears on the denomination, with split lines throughout the letters.

In 2022, an unusual Lincoln penny was presented for sale on eBay. It combined two errors: it had been double struck, and there was a die adjustment error. The latter occurs when the coin press has been adjusted and has struck the coin with insufficient force.

This YouTube video from BlueRidgeSilverhound looks at a number of 1966 penny errors. (Just ignore the incorrect information at the beginning about the coins only being minted at Philadelphia. That’s a common misunderstanding that arises from the absence of mint marks.)

No 1966 pennies had mint marks. This was a special measure taken by the Mint to discourage coin hoarding.

The value of a 1966 penny will depend on its condition and color. The finest red coins are worth around $900. Error coins, or coins with especially attractive toning, can be worth even more.

What is the most valuable 1966 penny?

The auction record for a 1966 penny went to an error coin. It had been double struck and the die was misaligned. It was certified as authentic by the Numismatic Guaranty Company, and sold on eBay for a best offer around the $25,000 mark.