The 1965 dime is one of those known as Roosevelt dimes. But is there anything special about that mintage? And if you have one of these coins, how much might it be worth?

We’re going to explore the 1965 dime value, and the factors that determine it. And we’ll take a look at its history, key features and interesting varieties along the way.

Ready to find out more? Let’s get started!

1965 was a very interesting year in the history of the dime. Until then, dimes had been made of 90 per cent silver. But silver was expensive – and becoming more so. A more cost effective solution was needed.

1965 saw the introduction of a new type of dime. This coin had a solid copper core, clad in a cupronickel alloy. The cladding was comprised of three quarters copper and one quarter silver. And it gave the new coin a similar silver appearance to the old one.

It was also a similar weight – just under 2.3 grams, compared to the 2.5 grams of the silver coin. And it conducted electricity in a similar way. This was important, as it meant the new coins could be used in existing vending machines.

Another interesting feature of the 1965 dime is that none of the coins have mint marks. This was again a result of the rising price of silver.

1964 had seen silver coins being hoarded. And with fewer dimes in circulation, there was pressure on copper coins too. Even cents started to be hoarded, as people struggled to find change.

Eva Adams, the Mint Director, believed that the problem was being made worse by collectors. She ordered that the coins minted in 1965 should carry no mint marks. This, the theory went, would make them less appealing to collectors, and less likely to be removed from circulation.

The absence of mint marks has caused some confusion. Some collectors believe it means that 1966 dimes were struck only in Philadelphia. As the US Mint’s original facility, the Philadelphia mint did not use a mint mark until 1980.

But in fact, 1965 dimes were struck at all three Mint facilities then in use – Philadelphia, Denver and San Francisco. It’s just that the lack of mint marks means there’s no way of telling where any individual coin originated. 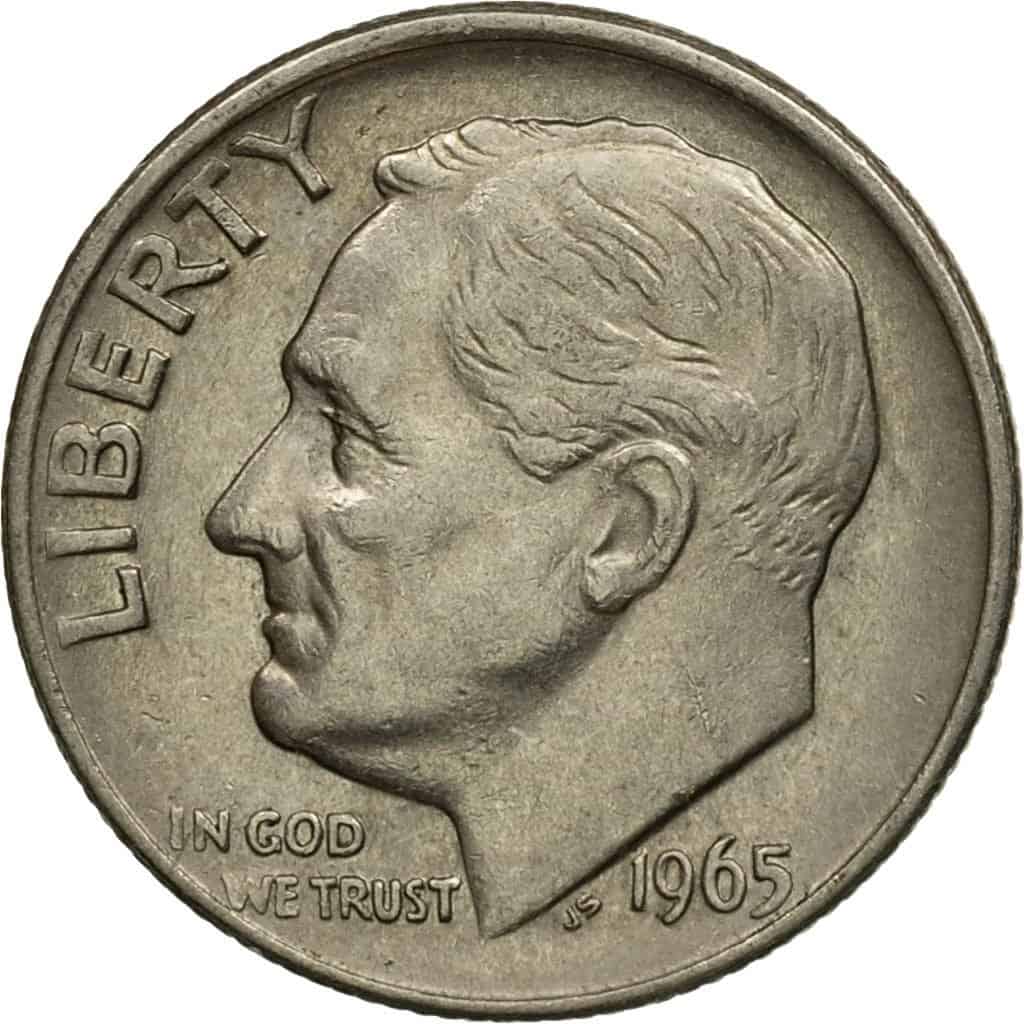 The obverse of the 1965 dime carries the image of former president Franklin Delano Roosevelt. It was the same portrait that had appeared on dimes since 1946, the year after Roosevelt’s death.

The image shows the head and neck of Roosevelt in profile, facing left. It was created by the artist John R. Sinnock, and his initials appear on a diagonal at the base of the bust.

Their appearance gave rise to the rumor that they honored the Russian leader Josef Stalin. The initials had been placed there, so the story went, by a soviet agent at the Mint. The belief was so widespread that the Mint decided to release a statement to put the record straight.

Nevertheless, the rumor was reignited when the Franklin half dollar was released in 1948, also designed by Sinnock – who by then probably wished his parents had called him George. It’s a timely reminder that ludicrous conspiracy theories are, sadly, nothing new.

But back to the 1966 penny. The word “Liberty” faces Roosevelt, curving along the left edge of the coin. The motto “In God we trust” is squeezed to the left of the portrait. It’s so close to the edge that the letter “W” slightly overlaps the band around the coin. The date appears to the right, again squeezed close to the band.

This is the only denomination where the design has not changed in any major way since 1965. Smaller changes, though, have been made.

In 2000, Roosevelt’s portrait was made slightly smaller, allowing the text to move away from the edges of the coins. This improved the design’s resilience to wear and tear. 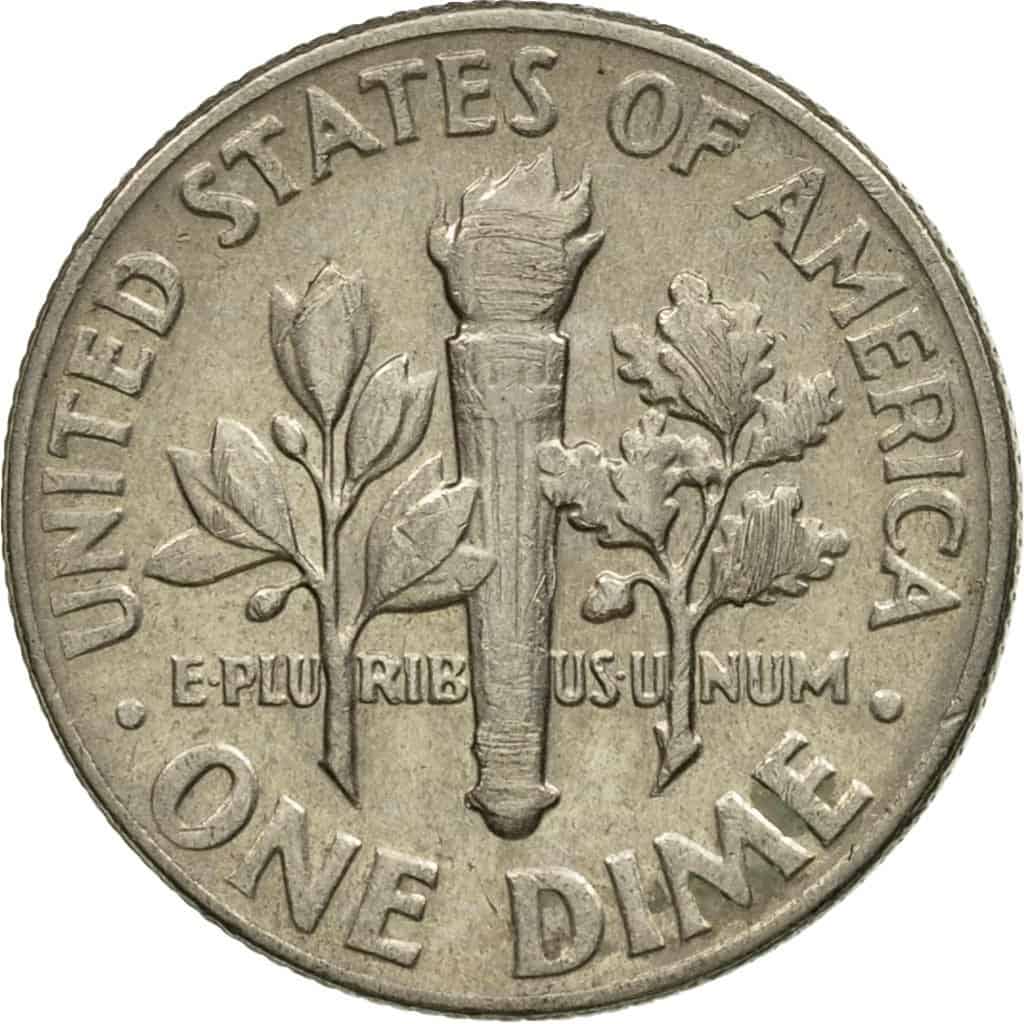 The reverse of the 1965 dime features a design of a torch, a sprig of oak and a sprig of an olive tree. The torch is in the center, and represents liberty. The olive sprig is to its left, representing peace. And the oak leaves are on the right, symbolizing independence and strength.

There are a number of small variations to the reverse design of Roosevelt dimes, of interest to collectors. These center around the detail on the torch. In 1965 dimes, the flame of the torch has no grooves. But in some other years, there’s one deep groove, and in others, two grooves.

In 1964, dimes struck at Denver or San Francisco had the mint mark “D” or “S” respectively. These appeared to the left of the torch, but are absent from 1965 dimes. When they were reinstated in 1968, they were moved to the obverse, where they appeared above the date.

In addition to the central design, the 1965 dime has the words “United States of America” around the top edge of the coin. The denomination curves around the bottom edge.

The Latin motto “E pluribus unum” appears running through the base of the torch and sprigs. It means “From the many, one”, and refers to the union of the states in a single country.

Other Features of the 1965 Dime

The absence of mint marks from the 1965 dime eliminates one criterion by which individual coins can be distinguished from one another. But this mintage saw a variant in the reverse design, which is hotly collected.

It’s known as the “full band”, and it’s a mark of the quality of the strike. The torch on the reverse of the coin has two bands circling it at the bottom and two at the top. In “full band” coins, these bands are clear and complete, with distinct separation between each line.

The independent coin grading company, the PCGS, began designating coins as “full band” in 2003. The designation is also sometimes known as “full torch”, and appears with the abbreviation FB or FT in coin descriptions.

This YouTube video from BigDCoins looks at the 1965 dime in detail.

The issues with hoarding of silver coins meant that dimes were in short supply by 1965. As a result, the 1965 mintage, with its new, cheaper composition, was struck in great numbers. Over 1.6 billion coins came out of the mint facilities.

As a result, they’re still easy to find today. And most 1965 dimes won’t be worth more than their face value.

But there are some exceptions to this. If you find a mint state coin in excellent condition, it could be worth a lot more.

The chances of this are about the same as finding similar quality dimes from other years in the 1960s. Even coins graded MS66 – one point above the minimum for “gem quality” – are readily available.

Far rarer than the standard 1965 dimes are those designated as “full band” or “full torch”. These exhibit a far higher quality of strike and are usually among the first coins produced from a new die. It’s that which allows the bands on the torch on the reverse to be completely and clearly delineated.

The PCGS has graded only 151 1965 dimes as full band at any level. So it’s not surprising that prices are much higher than for regular examples.

A coin graded MS63 with the FB designation is valued at $15 – three times as much as its equivalent without the designation. Today, an MS68 FB 1965 dime is valued at nearly $4,000.

MS68 is the highest grade at PCGS. But a coin graded MS69 FB by the NGC came up for auction back in 2017. At that time, it sold for $1,528. With MS68 FB examples making almost twice that amount at auction two years later, it’s likely that the price would be much higher today.

No proof dimes were produced in 1965. But instead, the Mint produced millions of dimes for Special Mint Sets. These were targeted at collectors, with the sets containing one example of each denomination for the year.

Special Mint Set (also known as “special strike”) coins are high quality strikes. But they’re also in plentiful supply, even at the highest grades. That makes prices much lower than for equivalent grades in regular strike coins.

You can pick up a 1965 SMS dime graded MS65 for around $7. That’s less than the regular strike at the same grade. And it’s about an eighth of the value of a coin with the full band designation. Even at MS68, prices rise to only $26.

If you have one of these coins, then, it’s unlikely to make your fortune. But on the plus side, it’s possible to find a beautifully struck coin to add to your collection for a modest outlay.

As we’ve seen, 1965 was the first year that dimes were made from a copper core with a cupronickel cladding. And that change in composition produced an opportunity for an error – 1965 dimes made from silver planchets intended for the previous year’s coins.

This type of error is known as a transitional off-metal error, and it’s extremely rare. That means any silver 1965 dimes, in any condition, are valuable. Most change hands for between $3,000 and $6,000.

Broadstrike errors occur when the collar that’s supposed to hold the planchet isn’t in place properly when it’s struck. The collar forms the rim and edge of the coin. So with a broadstruck error, the edge won’t be properly formed, but the full design will be present on both sides.

Sometimes dies break as they’re striking coins, leading to parts of the design being missing. That was the case for a 1965 dime with a die break (also known as a cud) above the letters “T” and “Y” of “Liberty”. In this case, it was very small, limiting its desirability to collectors.

Even graded MS65, this coin sold for only $20. Examples with larger and more dramatic die breaks, however, can be worth more.

The new metal composition meant that coins were vulnerable to cladding errors. Examples of 1965 dimes with this type of error range from those produced without an obverse at all, to those that are only partially clad.

The value is often quite modest. A 1965 dime graded MS64 by ANACS and partially missing its reverse clad layer sold for $90.

This YouTube video from Couch Collectibles looks at a number of 1965 dime errors.

None of dimes struck in 1965 have a mint mark, so the absence of one doesn’t mean your coin was struck in Philadelphia. Most are worth only their face value. But if you have a coin in excellent condition, it could be worth more.

Get out a microscope or loupe, and take a close look at the two sets of bands on the torch which appears on the reverse. If they’re both complete and clearly delineated, you may have a full band dime. In mint state, these can be worth anything from $5 to thousands, depending on condition.

Error coins can be worth more too. If you have a dime made of silver rather than clad in cupronickel, it will be worth thousands of dollars.

There are two ways to do this. The first is to look closely at the edge of the coin. If you see a copper colored strip, it’s a copper-clad coin. If there’s no sign of any copper, it’s possible you have a silver coin.

To be sure, you need to weigh it – and you’ll need a very accurate set of scales.