The 1964 dime is one of the series known as Roosevelt dimes, coins that are still being produced today. But is there anything about that year that makes them special? And if so, just how much might they be worth?

That’s what we’re here to find out. We’re going to look at the 1964 dime value, its history and its design. And we’ll find out what separates collectible coins from those that are worth only their face value.

The 1964 dime is known as a Roosevelt dime. It gets its nickname from the man who appears on the obverse, President Franklin D. Roosevelt.

The original decision to commemorate Roosevelt on a coin, whilst gaining strong public support, wasn’t universally approved of. Some argued that Roosevelt was not of the same stature as the other presidents commemorated on US coins – Washington, Lincoln and Jefferson.

Others, including the editor of the coin collectors’ magazine, The Numismatist, argued that the existing Mercury dime was too beautiful to be replaced. Another objection was that the dime was too small to do justice to Roosevelt’s portrait.

Nevertheless, the plans went ahead, and the first Roosevelt dimes were struck in 1946, a year after the former president’s death. Since then, new Roosevelt dimes have been struck every year, and they’re still being minted today.

The earliest dimes were made mostly of silver, with the addition of 10 per cent copper for strength. But the 1964 dime was the last to use this composition.

Silver was in great demand in the early 1960s, both for coins and in industry. The silver price was rising, and people began to hoard silver coins, including dimes, hoping to realise a profit.

At first, more coins were produced, in an effort to stop the hoarding. That led to huge mintage figures for 1964 dimes. Nearly a billion were struck in Philadelphia, with another 1.35 billion struck in Denver.

But the coins continued to be hoarded. So in 1965, the Coinage Act was passed, authorizing the production of dimes with a copper core clad in cupronickel. The new dimes were issued that same year. They were slightly lighter, weighing 2.268 grams, rather than the 2.5 grams of the silver coins.

The obverse – or “heads” side – of the 1964 dime carries the portrait of Franklin D. Roosevelt. It is the work of John R. Sinnock, the Mint’s Chief Engraver. His initials appear beneath the lower edge of the Roosevelt bust, and slightly to its left.

The image of Roosevelt has been the subject of some controversy. The African American artist, Selma Burke, claimed that Sinnock had copied her work. It was a position she maintained until her death.

It would not have been the first time Sinnock had copied another artist’s work without crediting them. He had done so with his depiction of the Liberty Bell, which appeared on two half-dollar coin designs.

But Sinnock had drawn Rooselvelt from life in 1933. And contemporary accounts relate him as having used those drawings, together with photographs, to create the new portrait.

It seems this is a question that will never be settled either way.

Roosevelt’s image faces the word “Liberty”, which curves around the left-hand edge of the coin. At the bottom left, beneath his chin, are the words “In God We Trust”. The date appears on the right-hand side. 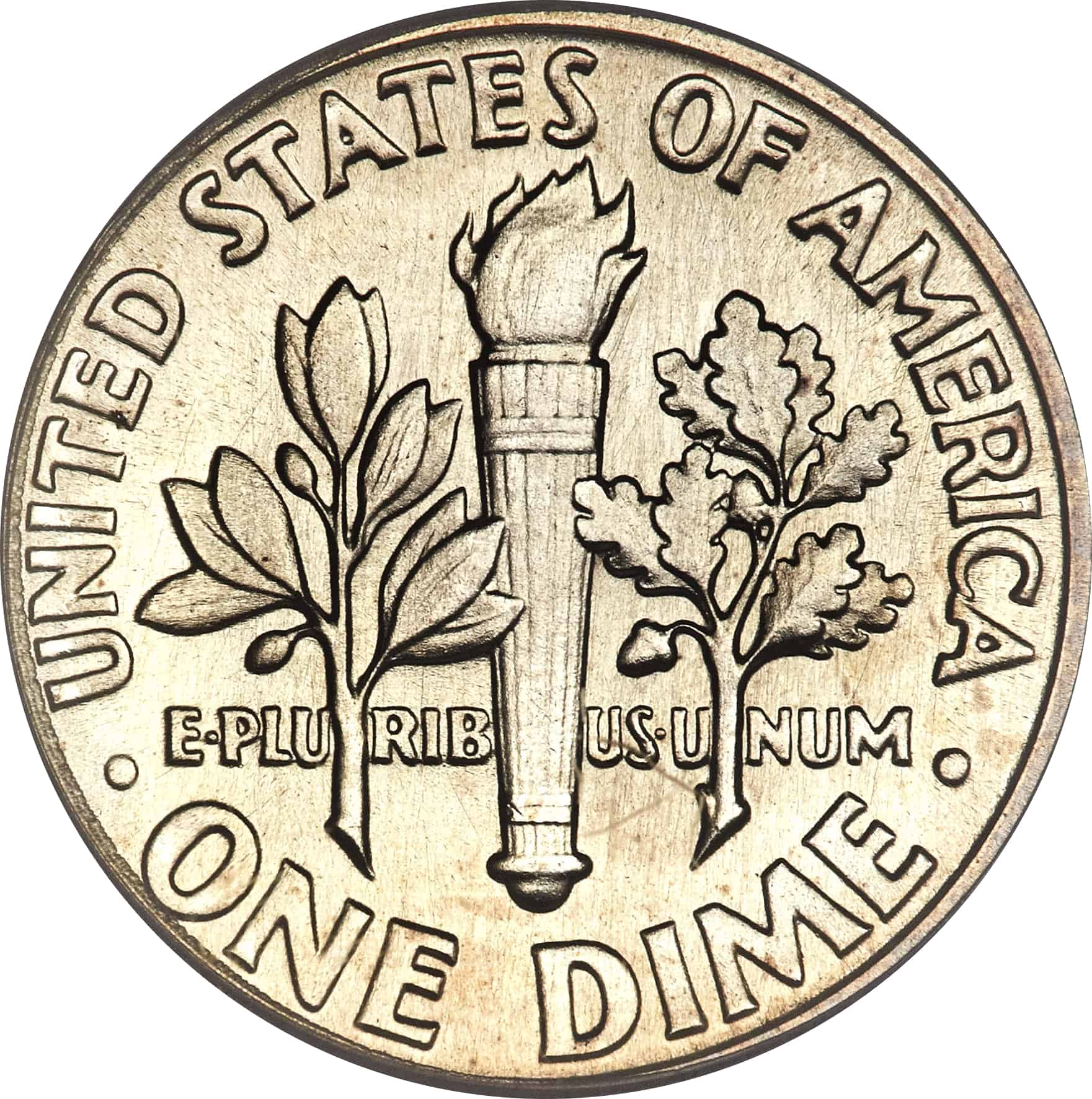 Sinnock also produced the design for the reverse of the 1964 dime. It shows a flaming torch – possibly Liberty’s torch – flanked by a sprig of olive and one of oak.

It was not the first design to have been submitted by Sinnock. Another version showed a hand grasping the torch, together with sprigs of olive and oak leaves. Yet another showed the torch surrounded by four scrolls, with the names of the four freedoms written upon them.

The Chairman of the Commission of Fine Arts, Gilmore Clarke, recommended the choice of the torch with olive and oak. The olive represents peace, while the oak symbolizes strength and dignity.

The words “E pluribus unum”, Latin for “From the many, one” run through the design on the horizontal. The country name curves along the top edge of the coin, while the denomination is at the bottom.

Other Features of the 1964 Dime

Some 1964 dimes are known as “full band” dimes, often shortened to “FB” in coin descriptions. This designation refers to the quality of the strike. And the bands are those that appear on the reverse of the coin, at the top and bottom of the torch.

In order for a coin to be designated “full band”, both sets of bands must be clear and distinct. Each set contains two bands, and these must also be fully separated from each other with a complete, unbroken line.

You may also hear about “full torch”, or FT, Roosevelt dimes. The PCGS tends to use “FB”, while the NGC uses “FT”. The NGC adds in a requirement for the vertical lines of the torch to be clearly defined too.

Full band or full torch 1964 dimes are generally worth more than coins of the same grade without those designations.

This YouTube video from JBCoinsInc explains the difference between the FB and FT designations, complete with images. 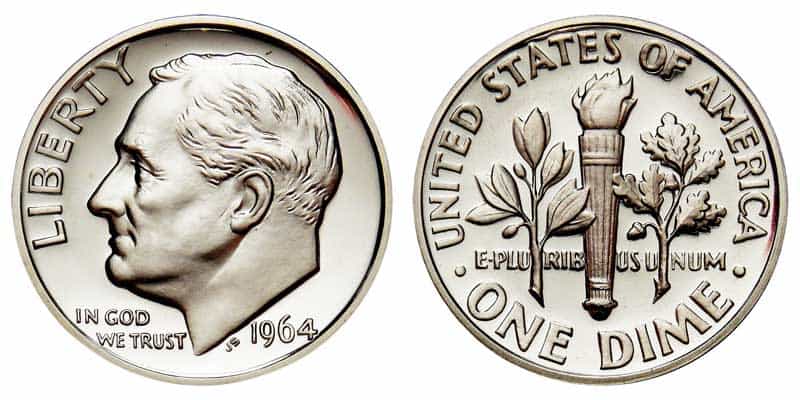 Almost a billion dimes were struck in Philadelphia in 1964. The large volume and relative modernity means they’re still easy to find today.

You can identify a dime minted in Philadelphia by the lack of mint mark. If there’s no letter on the reverse of the coin, next to the torch, it’s a Philadelphia dime.

A coin in extremely fine condition (XF45) will be worth around $3. XF45 coins have been circulated, but aren’t too worn. They will show some minor signs of wear on the highest parts of the design. And they may still have some luster in protected areas.

The finest known example without the full band designation is graded MS68. That changed hands at auction in 2021, selling for $384.

A full band designation will generally make a coin more valuable. At lower mint state grades, the difference can be relatively minor – just a dollar or so up to MS65. But the $50 value of a 1964 Philadelphia dime graded MS67 increases to $300 if it’s designated as full band.

Even more dimes were minted in Denver than in Philadelphia in 1964. Over 1.3 billion coins were struck, so they’re still easy to find today.

As with Philadelphia dimes, condition is key to value. And here again, a full band (or full torch) designation will make a coin more desirable to collectors.

At most grades, prices are about the same as their Philadelphia counterparts. An extremely fine, XF45, dime will be worth around $3. That increases to $4 at MS60, and $5 at MS60 and designated full band.

It’s not until the higher mint state grades that prices rise significantly. An MS67 Denver dime is valued at only around $30. But if it’s designated full band, it will be worth over ten times that amount. 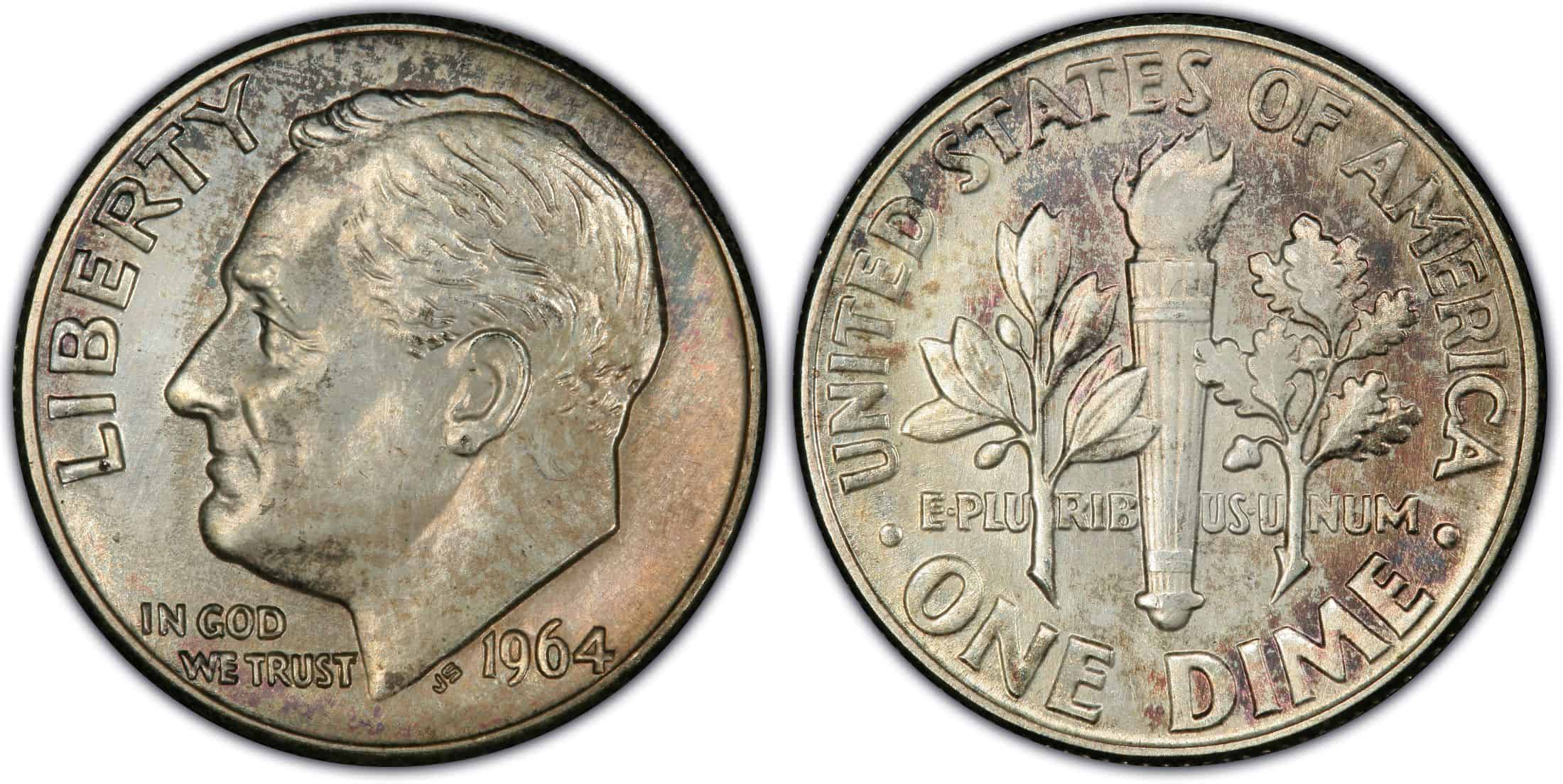 1964 saw the production of some 1964 special strike coins for what’s known as “Special Mint Sets” (SMS). These sets were usually produced in years where there were no proof coins.  The sets were aimed at collectors and contained one example of each denomination for that year.

Whatever the reason, these are rare coins. Only between 20 and 50 1964 Special Mint Sets are believed to exist. So that makes them very valuable.

The coins were struck in Philadelphia, so don’t have a mint mark. You can tell them apart from standard and proof coins by their special finish. They have a smooth, satiny look, shinier than regular strikes, but less glossy than proofs. And they’re usually well-struck and clean, with sharp, square edges. 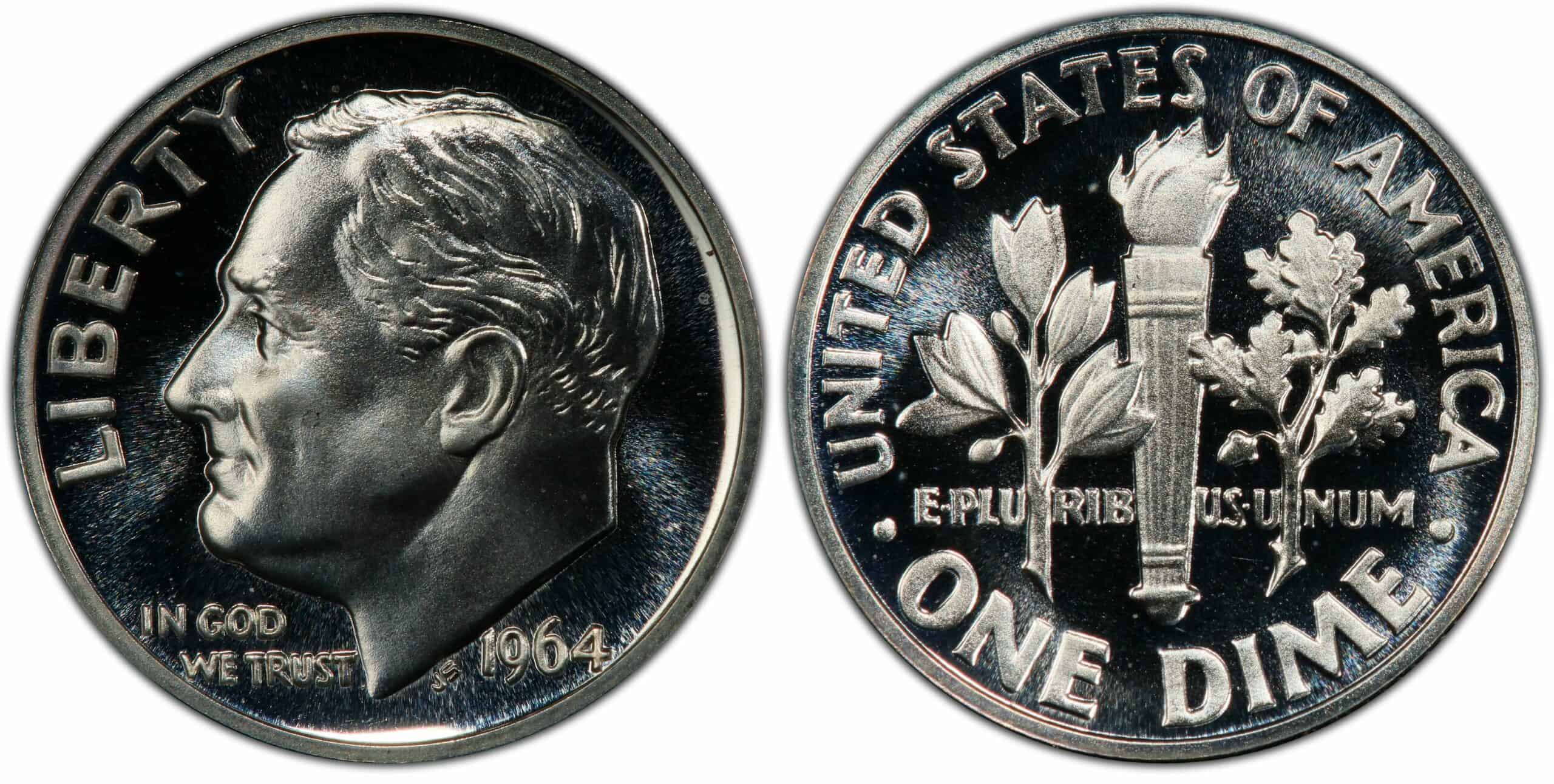 1964 proof dimes were made in far higher numbers than those for Special Mint Sets. Almost four million of them were struck. And that means it’s possible to purchase a very attractive coin for quite a modest price.

That value increases if the coin is designated a cameo or deep cameo. These designations are used for coins that have an attractive contrast between reflective fields and frosted devices. Deep cameos are coins where the contrast is particularly strong. 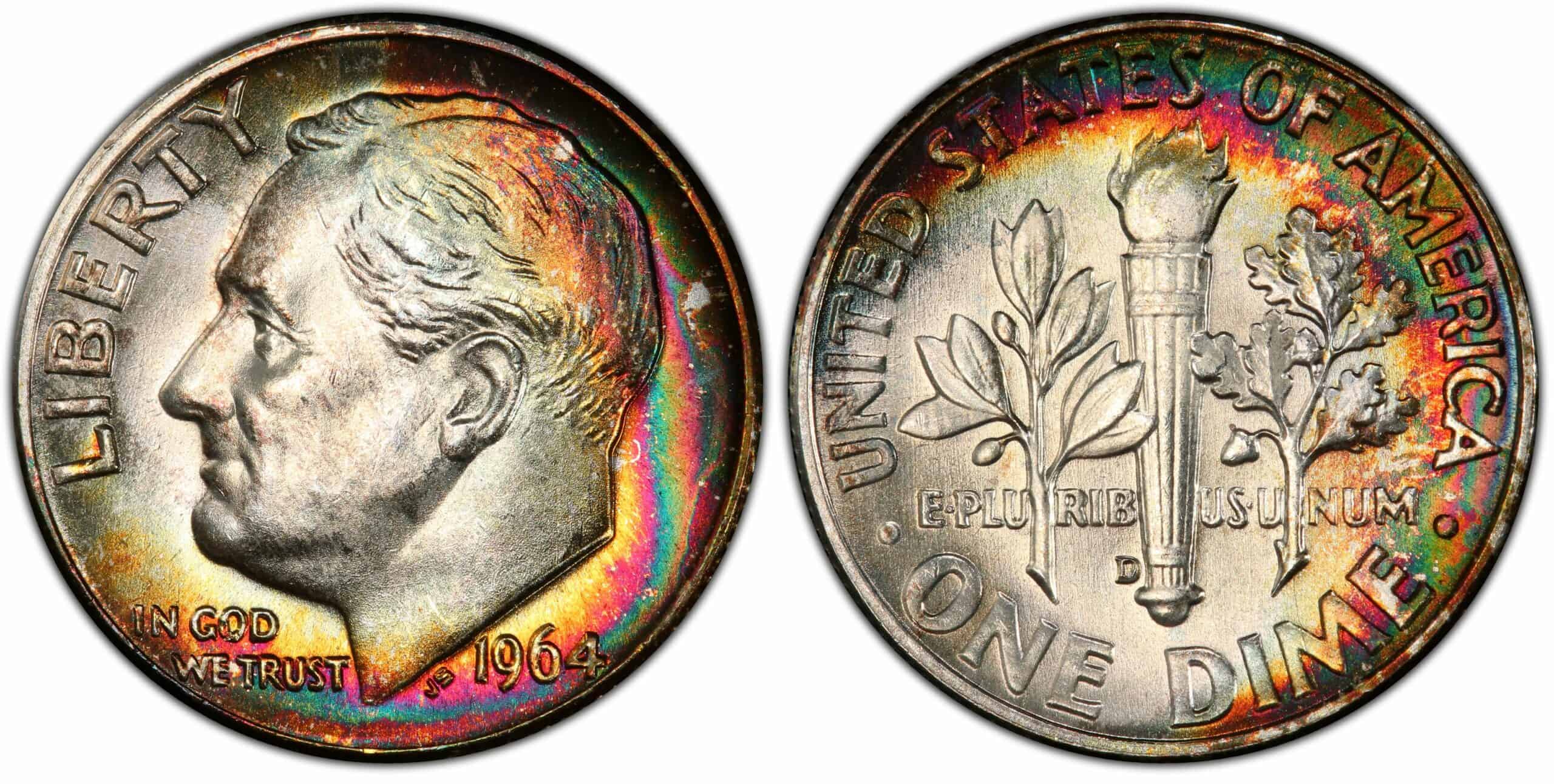 There are a huge number of varieties of 1964 dimes, both from Philadelphia and Denver. These include 10 repunched mint marks for the Denver dimes., and no fewer than 44 different double die errors from both mint facilities.

This interesting error occurred when some reeding – the strip around the edge of the coin – had fallen off a coin. It then got in the way when the next coin was struck, resulting in it being pressed into the obverse.

One dime struck in Philadelphia was struck on a defective planchet, the metal disc used to make the coin. In this case, the upper right portion of the planchet was missing. The resulting coin weighed just 2.2 grams, instead of the 2.5 grams it should have been.

Die cap errors happen when the coin isn’t properly ejected after being struck. It sticks to the die and is then struck repeatedly. The metal curves up at the edges, eventually looking a bit like a bottle cap.

This particular coin was stuck to the reverse die. It was graded MS66 by the NGC, and had the full torch designation. It sold at auction in 2009 for $460.

This interesting coin was double struck. And between the two strikes, the coin flipped, creating a coin with the obverse and reverse designs on the same side.

This Washington quarter was struck on an already-struck 1964 D Roosevelt dime. Parts of the Roosevelt bust and the date are visible on the obverse. Who knows how it happened.

This YouTube video from BlueRidgeSilverhound shows all these error coins.

The value of a 1964 dime can vary widely. Coins in excellent condition will always be worth at least a few dollars. And those at the very highest grades can be worth hundreds, or even thousands.

Look out for coins with interesting errors too. There are lots of different varieties of 1964 Roosevelt dimes, and some of them can be collectable. Look for signs of doubling and repunched mintmarks.

And if you spot a coin with a satin finish, you could be in luck. If it’s a 1964 Special Mint Set dime, it will be worth thousands of dollars.