1964 marks an important milestone in American coinage. It was the last year of the true silver quarter. Since then, the coins struck for circulation have been made of copper and nickel.

So for the 1964 quarter, value is an interesting question. Are all these coins collectable because of their place in numismatic history? Or are some coins more valuable than others?

Let’s take a look and find out!

*Only one 1964 quarter type B reverse is known to exist graded at MS67. There’s no sale information on the coin, and independent coin grading service the PCGS has not estimated its value.

History of the 1964 Quarter

The quarter as a denomination was first minted in 1796. And since 1831, it has been a consistent part of the nation’s coinage.

The idea of a quarter came from Spanish coins. In the eighteenth century, Spanish dollars were regular divided into eight slices – the “pieces of eight” well-known from pirate stories.

To this day, a quarter is sometimes referred to as “two bits”. The expression refers back to its value as two pieces of eight.

Various designs have been used for the quarter through the years. Many bore the image of Lady Liberty. But 1932, the bicentenary of George Washington’s birth, saw the first quarters produced with his image. They proved popular with the public, and the design remained the same until 1965.

It was the rising price of silver that finally brought changes. The quarter was made of 90 per cent silver, and members of the public were increasingly hoarding the coins.

To begin with, the Treasury responded by increasing supply, in the hope this would stop the hoarding. Coins marked 1964 continued to be produced into 1965. But the production depleted the Treasury’s reserves of silver. And silver prices continued to rise.

As a result, the composition of the coins was changed. The 90 per cent silver quarters were replaced by quarters with a copper core and a cladding of copper and nickel. All quarters dated 1965 were made from this new combination of metals.

Features of the 1964 Quarter

The Obverse of the 1964 Quarter 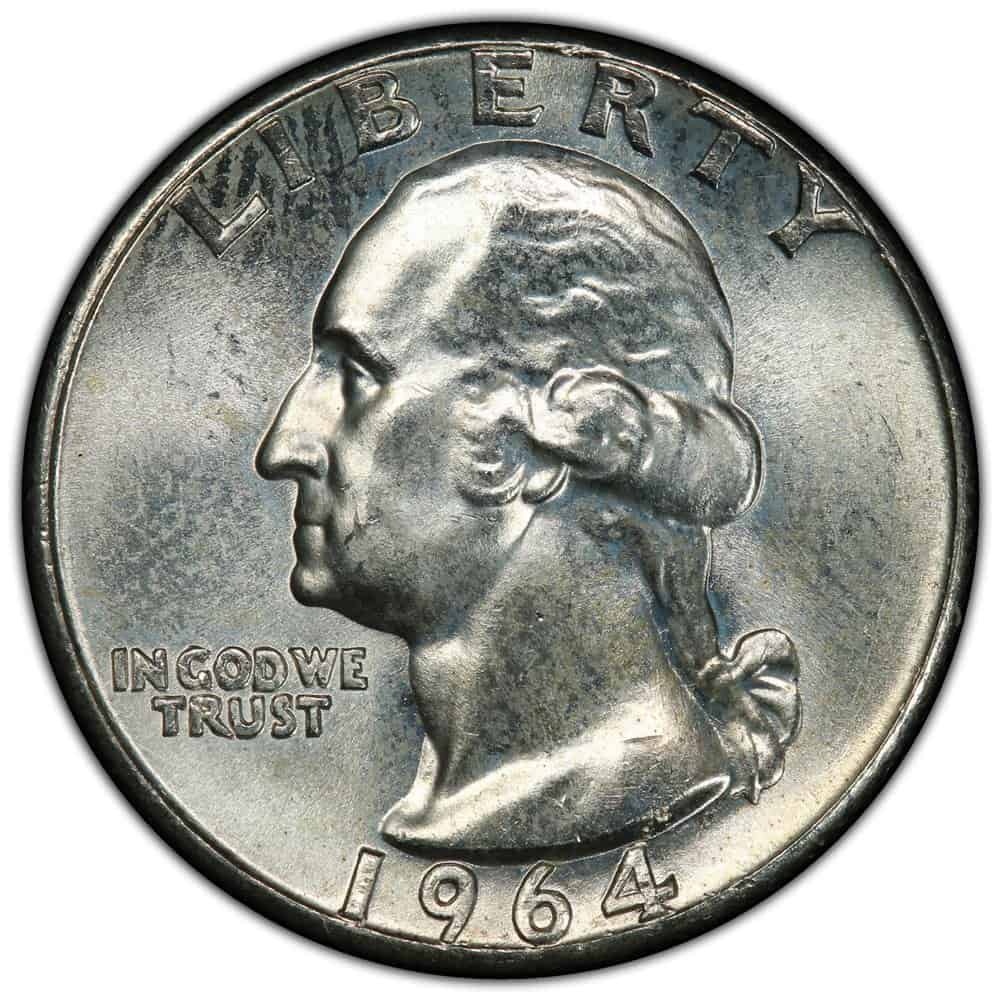 The portrait of Washington which appears on the obverse of the 1964 quarter was sculpted by John Flanagan. The choice of Flanagan’s portrait, however, was controversial.

It had originally been proposed to mint a half-dollar to celebrate Washington’s bicentenary. A design competition was held. The Bicentennial Committee and Fine Arts Commission reviewed the entries and recommended a design by Laura Gardin Fraser.

But it was later decided that the commemorative coin should be a quarter instead. And the Treasury decided to hold a new design competition. It specified that the design should be based on the bust of Washington sculpted in 1785 by Jean-Antoine Houdon.

The bust was based on a mask made from plaster of Paris that had been applied to Washington’s face. It was generally considered the best representations of the former president, and had already been used for various medals. Laura Fraser had also based her portrait on it.

Once again, the Fine Arts Commission recommended Laura Fraser’s design. But the Secretary of the Treasury, Andrew W. Mellon, unexpectedly disagreed and selected Flanagan’s portrait instead.

Despite various attempts to persuade him to think again, he remained firm. And when he was succeeded in office by Ogden L. Mills, Mills declined to reopen the matter.

In Flanagan’s portrait, Washington faces left. The design was well suited to coins. Because it was in low relief, it was easy for the dies to achieve a clear strike.

Above Washington’s head curves the word “Liberty”. The date curves around the lower edge of the coin. And the motto “In God we trust” sits to the left of Washington’s bust, just below his chin.

The Reverse of the 1964 Quarter 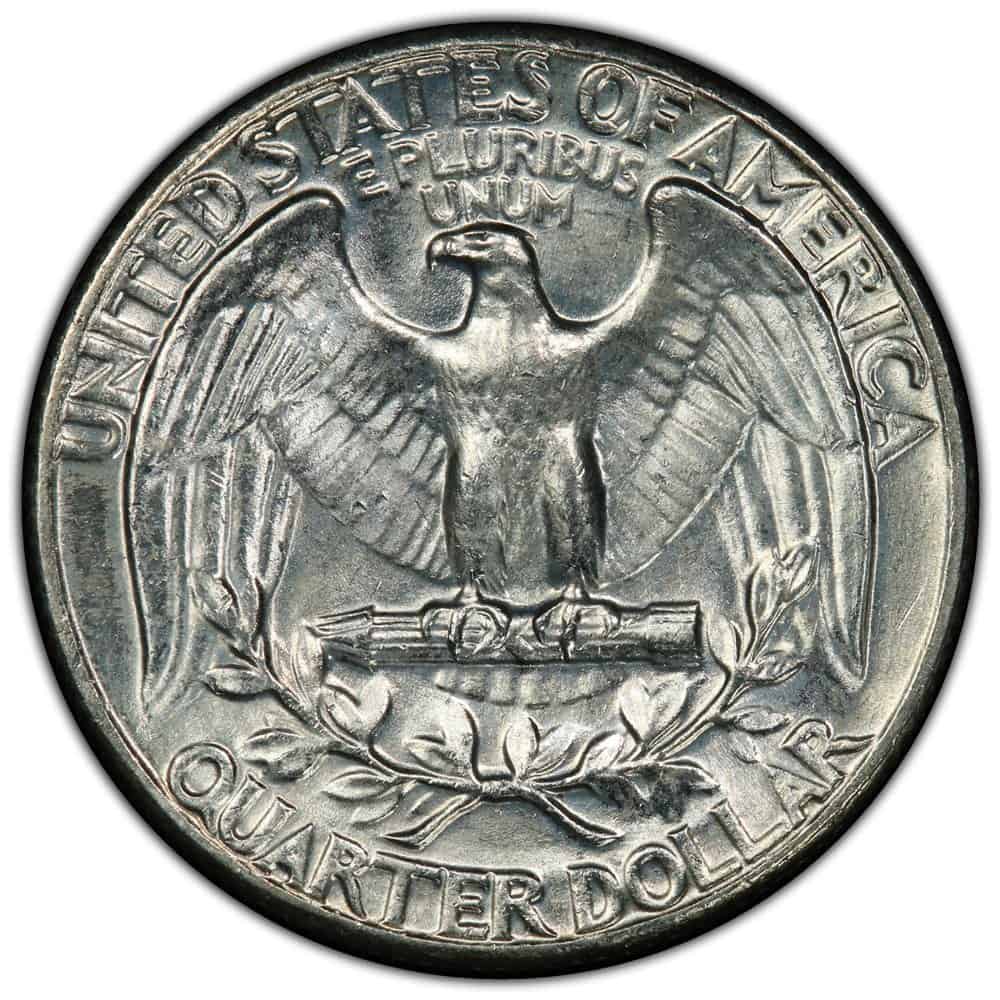 The reverse of the coin was also designed by Flanagan. It shows an eagle with its wings outstretched, perched on a bundle of arrows. Beneath it, two olive branches curve upwards.

The denomination “Quarter dollar” appears at the bottom of the reverse, curving around the edge. This is mirrored by a curving “United States of America” at the top.

Beneath that, written on the horizontal, is the Latin motto “E pluribus unum”. It means “from the many, one”, and refers to the union of the states.

Other Features of the 1964 Quarter

The key feature that distinguishes the 1964 quarter from modern examples is its composition. Coins made in 1964 were made of 90 per cent silver. After that, standard quarters were made from a combination of copper and nickel.

This YouTube video from BigDCoins shows the difference between the 1964 and 1965 quarters.

1964 saw quarters being minted at both Philadelphia and Denver. Those struck in Philadelphia don’t have a mint mark, but those from Denver have a “D” on the reverse. Look for it beneath the center of the olive branches.

Turn the coin on its side, and you’ll see that it has a series of grooves which run perpendicular to the coin faces. This is called a “reeded edge”, and it originated towards the end of the eighteenth century. It was intended to prevent slivers of metal being clipped from the edges of gold or silver coins. 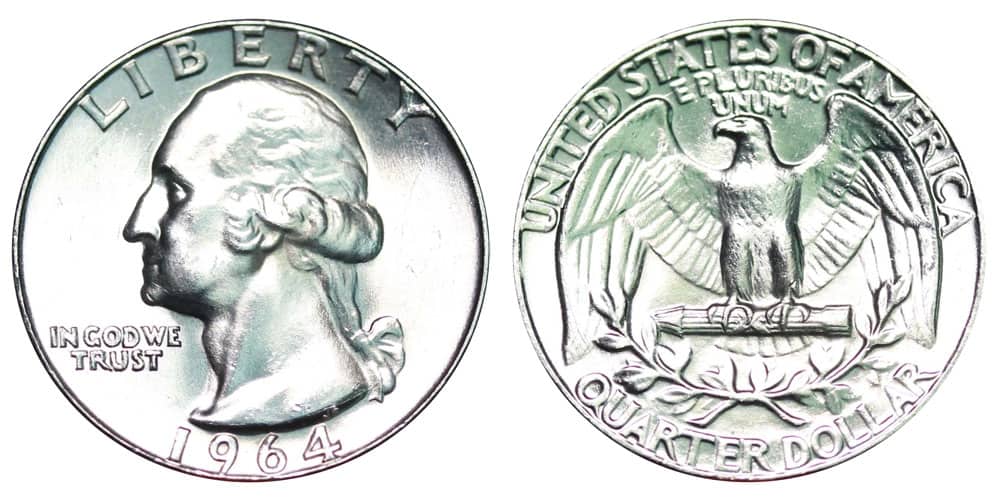 1964 quarters without a mint mark were struck in Philadelphia. They are slightly rarer than the Denver coins: 560 million coins emerged from the Philadelphia presses, compared to over 704 million from Denver.

The high mintage means that finding coins in circulated grades isn’t difficult. But in mint state, they’re less common. An extremely fine 1964 quarter is worth about $6. But prices rise steeply through the gem grades. An MS65 coin is worth about $36, while at MS67, that value rises to $675.

The highest graded Philadelphia 1964 quarters known to exist are those graded MS67+. The PCGS have graded a dozen at that level. And they’re worth around $3,750 a pop.

The Denver quarter, as we’ve seen, was minted in slightly highly numbers than its Philly counterpart. And values are modest unless you’ve got a coin that’s of excellent quality and condition.

While the San Francisco mint didn’t strike any quarters for circulation in 1964, it did strike proof coins. Like the Philadelphia coins, the proofs don’t have a mint mark. They were destined for collectors, and almost 4 million of them were struck.

As a result, they’re still easy to find today, and prices are relatively modest. You can pick up a proof graded PR63 for about $10. And even coins graded PR67 can be bought for less than $30.

There is, though, a big jump in value for coins with a perfect PR70 grading. They command a price of about $1,150. And a coin graded PR69 and designated a “deep cameo” is worth around $750. 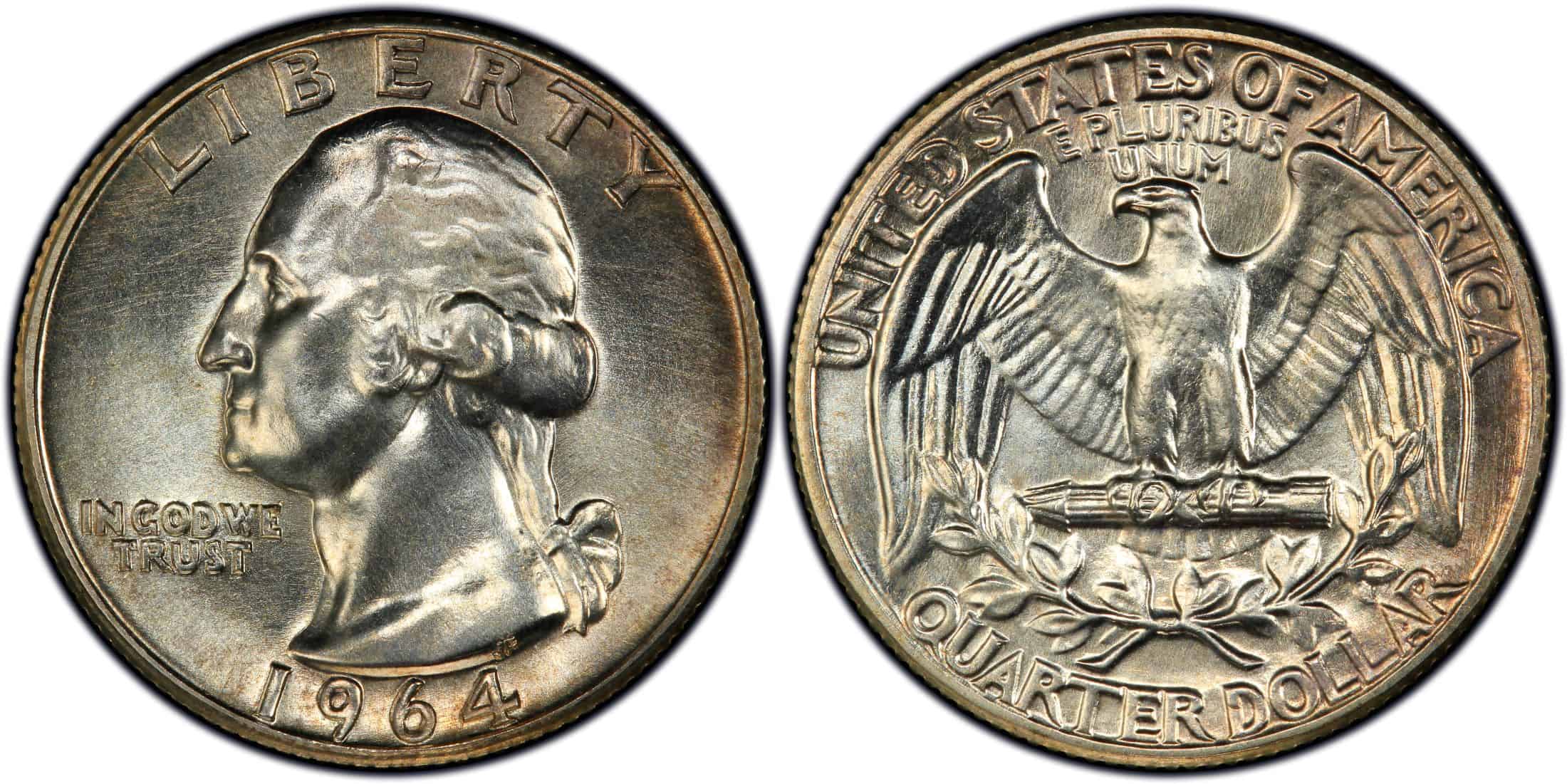 The mint produced no proof sets of coins from 1965 to 1967, instead offering what it called a “Special Mint Set”. These included a coin of each denomination produced that year in the San Francisco mint facility.

The coins from 1965 to 1967 replaced proof and mint state sets for those years. But a Special Mint Set was also produced in 1964. No-one knows why, or exactly how many sets were produced. But estimates of numbers vary from just 20 to 50. 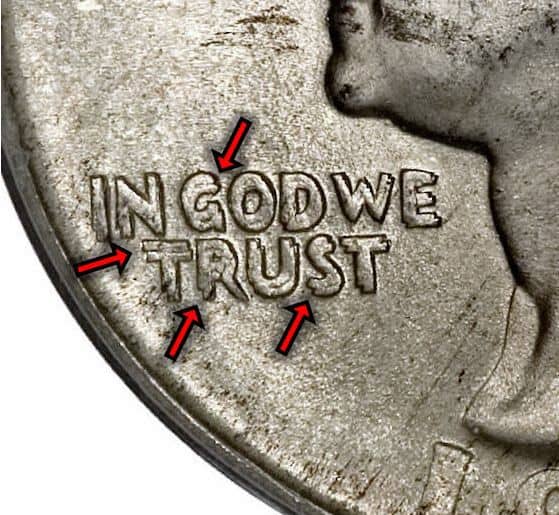 A number of different varieties of double die errors are known to exist amongst 1964 quarters. On the obverse, there’s only one variety. The doubling can be seen in the letters of the phrase “In God we trust”.

A 1964 quarter struck in Philadelphia with this error sold on online auction site eBay in 2018. It was graded MS64 and fetched $145. The highest known quality of this error coin is one point higher at MS65. Find one of these, and it will be worth about $250. 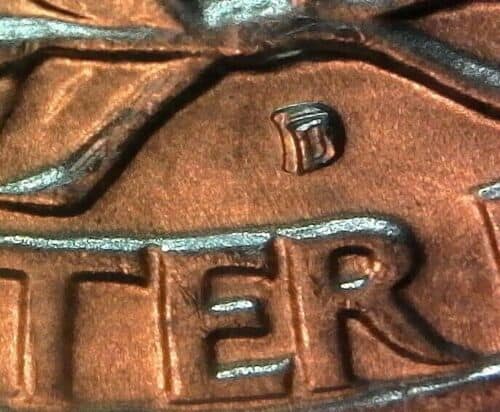 In circulated extremely fine condition, they’ll be worth between $40 and $50. But the FS-804 die pairing is worth $120 at the same grade.

Prices for gem quality coins are much higher. Examples graded MS65 are worth between $650 and $2,000 depending on the variety.

The Type B reverse is one that was used in error, having been intended for proof coins. It can be spotted by looking at the letters “E” and the “S” at the end of “States”. In a Type B coin, unlike the standard (or “Type A” variety), there’s a clear gap between the two letters.

1965 saw changes to the design on the reverse of the Washington quarter. It also saw the silver coins replaced with a copper coin clad in copper and nickel.

That transition led to another type of error: some coins being struck with the 1964 obverse and the 1965 reverse. This is sometimes referred to as the Type C reverse.

This YouTube video from Couch Collectibles looks at different errors in 1964 quarters.

Most circulated 1964 quarters aren’t particularly rare. The coins minted in Philadelphia are slightly rarer than those from Denver – but both are still widely available.

Rarer, though, are coins of the best quality, those graded MS65 and above. There are also a number of interesting error coins that are considerably harder to find. And perhaps rarest of all are the 1964 quarters produced for Special Mint Sets.

A 1964 quarter will always have some value associated with its silver content. That will vary over time, but you can usually pick up a standard 1964 quarter in extremely fine condition for about $6. At MS67, such coins will be worth several hundred dollars.

Proof 1964 quarters aren’t particularly valuable unless they’re the best possible quality. Decent examples can sell for anything from $10 to $30. But if you have a proof with a perfect grading of PR70, or one graded PR69 with a “deep cameo” designation, it’ll be worth around $1,000.

Error coins can be worth anything from tens to thousands of dollars, depending on their quality. Amongst the most valuable is the transition error – the 1964 obverse with the 1965 clad reverse. At MS66, that’s worth well over $2,000.

I have a 1964 no mint mark with no ( I ). In god we trust , were the I would be there is a raised fridge line starting at the edge and going past were the top of the I would end. The eagles talans look to have extra talon in both the middle class that wrap around the front of the log it is perched on. The ( Q ) in the word quarter looks to be holly in the middle of the letter.there is a raised notch above the letter ( A ) on the word states the leg on the letter ( R ) is raked out at the bottom farther than the other ( R ) in the same word. It has more errors than just those mentioned.