A nickel is a 5-cent US coin coated with nickel – that’s how it got its nickname. It was first minted in 1866, but our particular interest is in the 1964 Jefferson Nickel. It’s a popular coin among collectors and traders, so in this article, we’re going to verify the 1964 Nickel Value.

The first ever 5-cent coin was a silver half dime minted from 1793 to 1873. Although it was spelled disme, the ‘s’ was silent and was eventually dropped altogether. As the story goes, Thomas Jefferson raided his cabinets for silverware and handed it over to the mint so they could make those first 1,500 silver half dimes. But the Civil War made people hoard coins.

Paper money was introduced to fill the gap before base metal coins came into play. They started with cupronickel 2-cent and 3-cent coins clad with nickel. Once these were accepted by the public, the clad 5-cent coin aka the nickel showed up in 1866. By the 1890s, nickels were in demand for use in slot machines, snack machines, and coin-fed musical instruments.

Nickelodeons used them too – you could watch continuous film reels that were 12 minutes long. And even in the west, gold and silver coins faded in popularity as the nickel took hold. Back then, nickels were only minted in Philadelphia, but after 1906, Congress allowed the other mints to work on the coins. By 1912, nickels were issued in Denver and San Francisco.

The Buffalo Nickel (1913 to 1938) that came before was quite popular with the public, so it circulated well. But it was hard to produce. It wore out the dies rather quickly, and the design on the coin became less and less distinct as it passed through multiple hands. The mint was glad for a chance to change it, and they eagerly switched to the Jefferson Nickel in 1938.

The 1964 nickel is also a Jefferson nickel. Like the original one from 1938, it was designed by Felix Oscar Schlag. Schlag’s design was a contest winner, and he earned $1,000 for his work. He did have to modify his initial design, but once it was approved, it stayed on the coin until 2004. Unlike other coin makers, his initials (FS) weren’t stamped on the coin until 1966.

The coin shortage of the 1960s (due to hoarding) meant the mint stopped putting mint marks on coins to discourage silver stacking. So the 1964 nickel was the last 5-cent coin to bear mint marks until 1968. 1964 Nickels came from the Philadelphia and Denver mints, so you won’t find any with the S mint mark. But the 1964 SMS can be quite valuable – $8,000+!

That said, you may see lots of 1964 Nickels (as well as nickels from other years) listed as FS. And this may be confusing because 1964 Nickels don’t have Felix Schlag’s initials! Well, in this context, the FS stands for Full Steps. It describes coins that are in such good condition that you can count 5 or 6 of the stairs leading to Monticello. These can sell for over $30,000!

Features of the 1964 Nickel

Nickels aren’t worth much today, and officials want to phase them out along with the penny. But collectors still study and trade this coin, so let’s review some of its most distinctive traits. 1,028,622,762 nickels were minted in Philadelphia and 1,787,297,160 in Denver, with none in San Francisco. It was the largest batch to date, possibly because most were made in 1965.

The Obverse of the 1964 Nickel 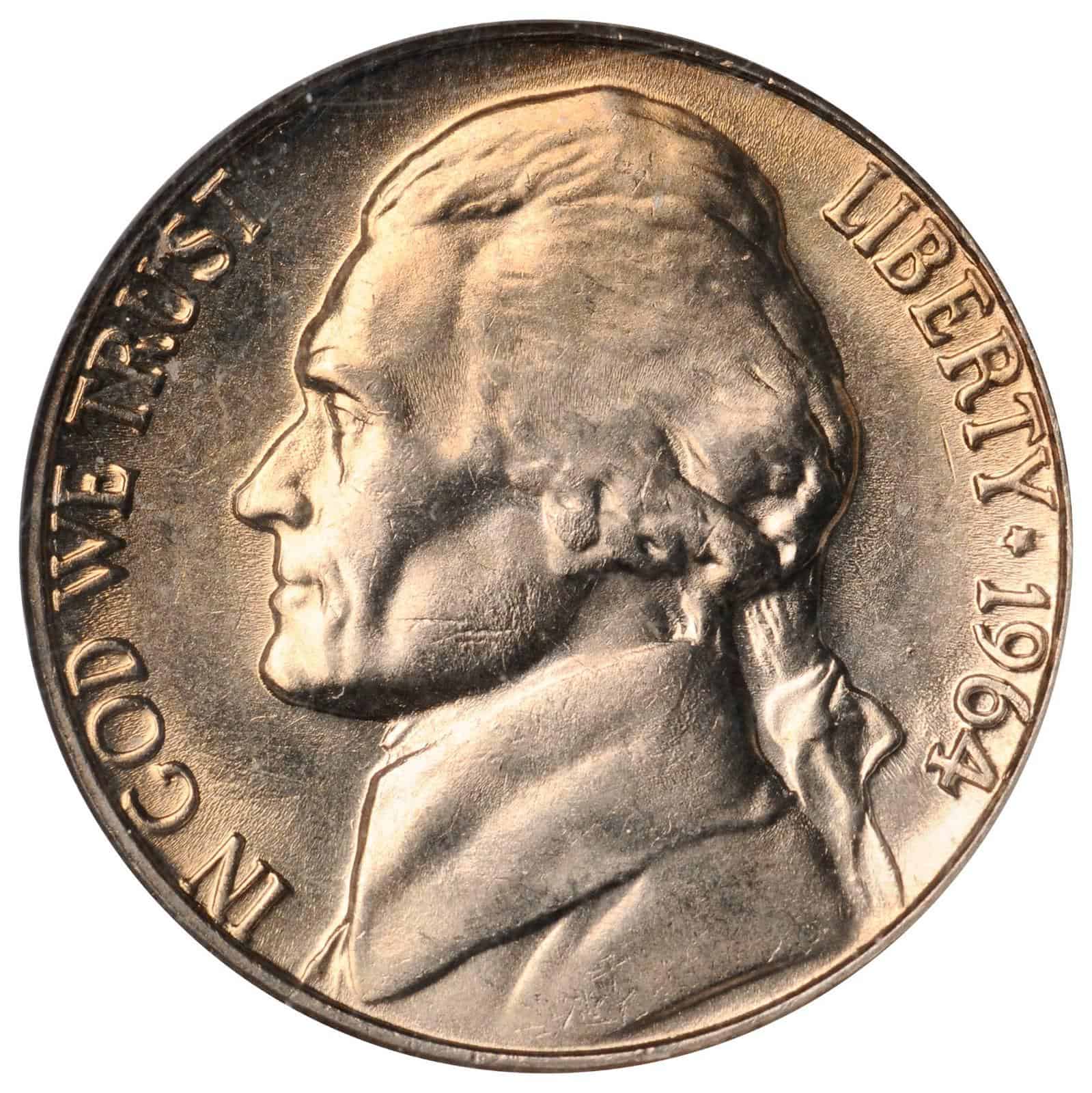 The obverse (heads side) of the 1964 nickel features Thomas Jefferson. He was one of the Founding Fathers and served as the 3rd US President. Schlag based his portrait on a bust sculpted by Jean-Antoine Houdon. The portrait is in profile and faces left, with the words In God We Trust in front of his face. Behind his head, the word Liberty runs along the collar.

The minting year is after the legend Liberty. Officials didn’t like the font that Schlag used so he was asked to change it. During the War Years (1942 to 1945), nickel was diverted to the war effort, so these War Nickels have a different alloy that’s 56% silver, 35% copper, and 9% manganese. But 1964 nickels have the same metal composition as earlier pre-war coinage.

The Reverse of the 1964 Nickel 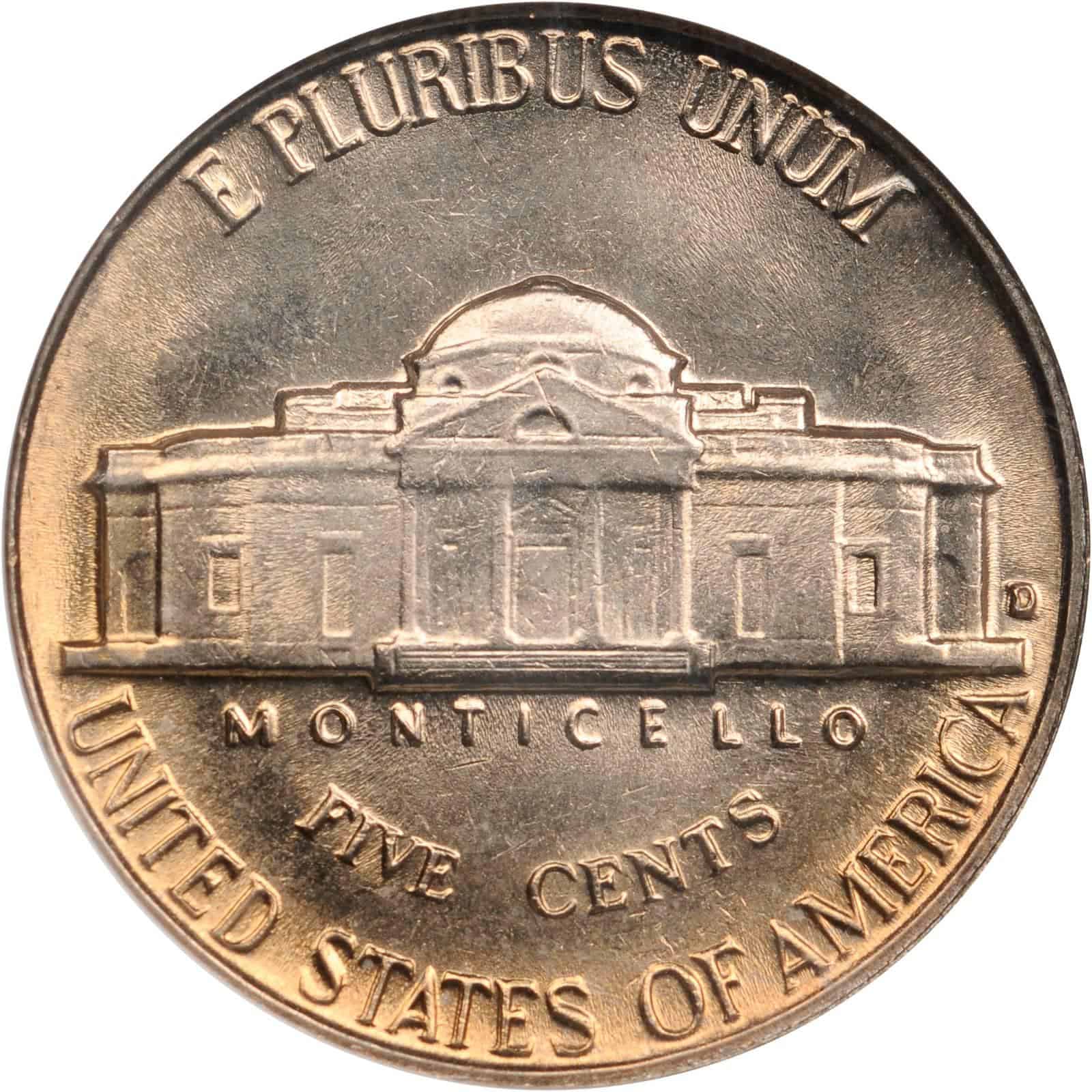 The reverse (tails side) of the 1964 nickel features Monticello – that’s the formal name for Thomas Jefferson’s house in Charlottesville, Virginia. Along the top collar is the legend E Pluribus Unum. The word Monticello is stamped below the building, and the coin also has its denomination spelled out as ‘Five Cents’. The bottom collar reads United States of America.

In the original design, Schlag had sculpted Monticello at an angle with some trees in the background. The mint made him change it to a straight-on image that faced forward. This design was used until 2003 when it was temporarily replaced by special edition Lewis and Clark designs. After 2004, Schlag’s reverse resumed, though the front design was changed.

Other Features of the 1964 Nickel

Nickels are made of 25% nickel and 75% copper. They’re sometimes described as bronze, cupronickel, or clad coins. The core of the coin is copper with nickel plating on top to mimic the appearance of those original silver half di(s)mes. Nickels weigh 5g and have a diameter of 21.21mm (0.835”). They’re 1.95mm thick (0.077”) and have a smooth edge without reeding.

Some earlier Liberty Head nickels aka V nickels (1883 to 1913) had V instead of 5 and didn’t have the word ‘CENTS’. They were slightly wider at 22mm (0.87”). Fraudsters plated them in gold, added reeding on the edge, and passed them off as gold $5 coins. Charles Barber, the Mint Engraver, shrunk the coins to 21.21mm and added ‘CENTS’ to reduce counterfeiting.

Because so many 1964 Nickels were minted, most are only worth their face value. But the melt value changes according to the market price of copper and nickel. Also, since the coin is so common, collectors don’t pay attention to anything below Mint State. And even then, unless you get a rarity like an FS or SMS, you’re unlikely to make much profit from nickels.

Over a million 1964 nickels were coined in Philadelphia, so they have no mint mark. At low grades, the coin is barely worth its face value of 5 cents. But if you can find Full Steps coins, the price goes up. A 5FS or 6FS (meaning 5 or all 6 of the steps are discernible) can go for anything from $20 to $15,000. This is because the FS coins are harder to find in the wild. 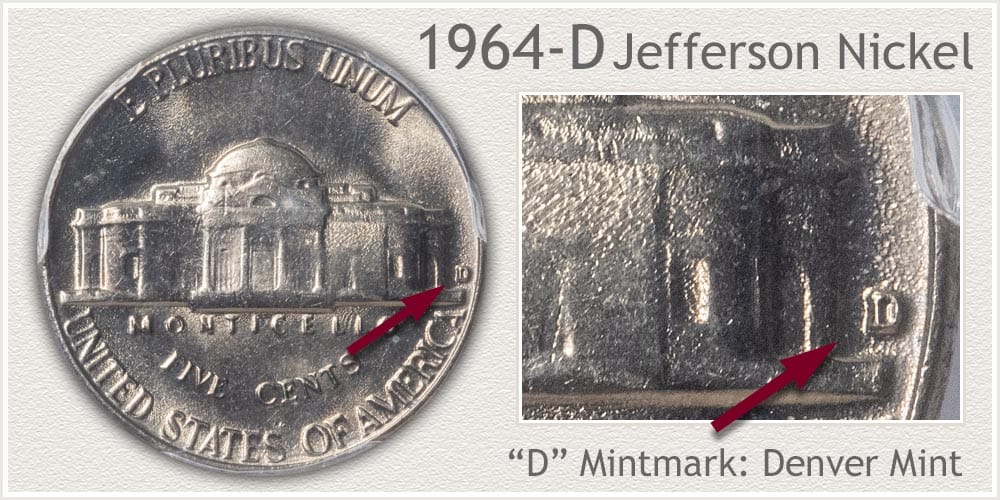 Coins with errors can sometimes fetch better prices than flawless coins. But this depends on the type of error. Let’s look through some common coin errors and see how they measure up.

Nickels have silver toning on the outside and are copper-colored on the inside. A wrongly annealed coin is when part of the nickel plating on the top comes off during minting. When you look at the coin, it may have a silvery surface with a copper-toned splotch or vice versa. They look cool but aren’t pricy. One 1964 MS 62 sold for $40, though it’s still more than 5c.

Ordinarily, the edge of a coin is made using an incusion machine, a three-piece collar, or both. With the three-piece, the planchet expands to fit the collar. The three pieces are then detached to release the coin. If any of the three break off during minting, the metal on the planchet ‘spills over’ aka a broadstruck error. 1964 Broadstruck MS 62 Nickels go for $55.

When coins have errors (or are fake), you can often tell by weighing the coin. Nickels should be 5g so anything less or more confirms an error. Nickels struck on penny planchets (1c) weigh 3.0g and are copper toned. Even in lower grades, this error is valuable. A 1964 Nickel struck on a 1c planchet sold for $180, and it was only AU58. In MS 62 RB, it sold for $299.

Some errors are harder to explain … how can you strike a US coin on a planchet from another country? Well, the Philippines was once a US Territory, so that may be part of it. Either way, you can spot a 1964 nickel struck on a 10-centavo planchet by weighing it. This one is only 2.06g and because it’s graded MS 64, this 1964 error nickel sold for over $1,000. 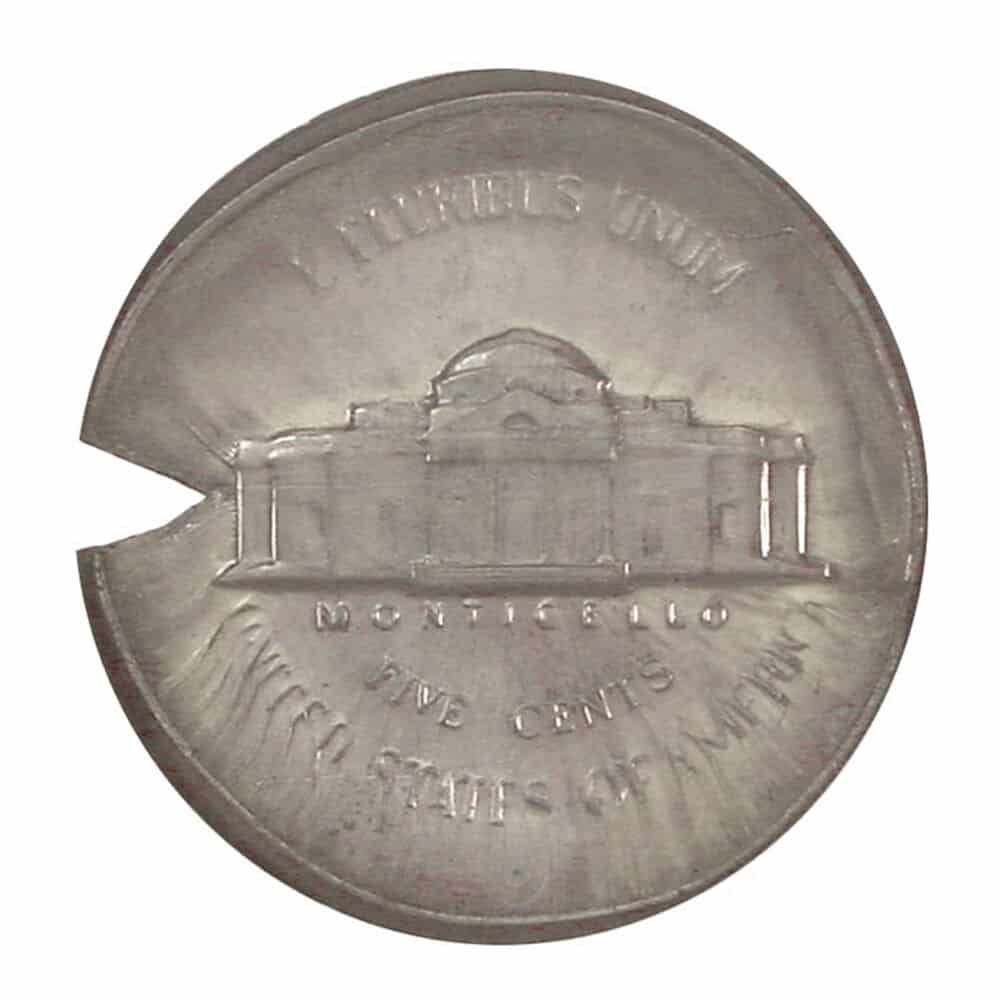 A brockage error means the same mistake appears on both sides of the coin. This could be a cut that slices through the front and back or a planchet indent. The description of the error is based on where the flaw was formed. On this coin, that’s an obverse broadstrike towards the lower left of the coin, causing a V-notch at the bottom. The 1964 MS 64 error sold for $90. 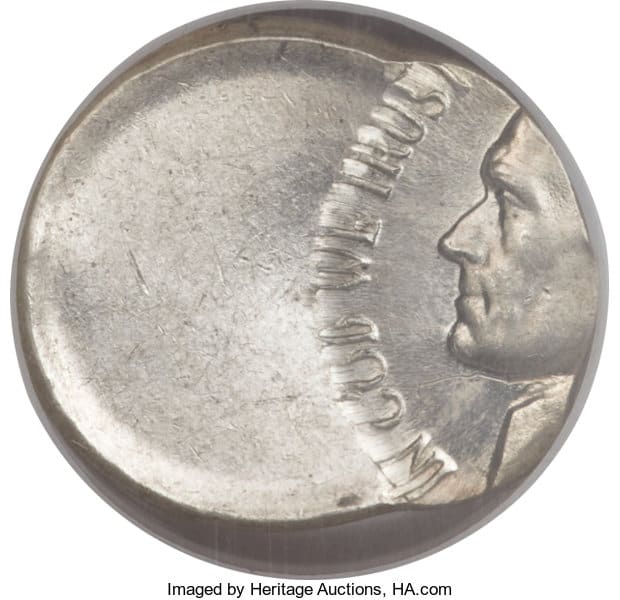 Before 1965, dimes were minted with 90% silver and 10% copper. After that, they had the same cupronickel composition as nickels. So if a 1964 nickel was struck on a silver planchet, the value would be not just in the error, but also in the silver content, since the coin has a higher melt value. This 1964 nickel had an off-center error to boot. It fetched over $1,000.

As we said before, a brockage error is when the same mistake occurs on both sides of the coin creating a sort of mirror image. If the error happens late in the minting process, it can be more drastic. This sample coin has brockage that cut the front and back of the coin across the middle. The design stretched, so it looks like its edges melted off. In MS 62, it’s worth $402.

Sometimes, an object gets between the die and the planchet during minting. This leaves a visible imprint on the finished coin, and it’s called a strikethrough or struck-thru error. The error will be categorized by the size of the strikethrough and the material that covered the coin. This 1964 MS 64 Nickel was struck-thru with cloth or wire mesh. It sold for $862.

Coins are struck multiple times during minting. (Except for SMS coins that are only struck once, but with extra pressure for clarity.) The planchet might shift between strikes, causing a double-punch error. If the coin is already a high grade, its price rises. This 1964 D/D FS RPM MS 65 sold for $2,800. RPM means re-punched mint mark. D/D is a D on top of another D.

This coin error demonstrates the multiple strikes on a typical coin. It was struck four times, but three of them were off-center, meaning this planchet was dancing around a lot! Since this coin essentially has three errors in one, and because it’s a high-grade coin to begin with, it got a pretty good price considering its 5c face value. The 1964 MS 64 error nickel sold for $1,200.

How Can You Tell a 1964 Special Strike Nickel?

A special strike isn’t a circulated coin or a designated proof, but it often has the sharpness and definition of a proof coin. The angle of the edge is distinct, the features are well-defined, and the surface has a satin finish. Only 12 to 24 of these coins have popped in public spaces.

In other denominations, SMS means Special Mint Set. These are coins issued from 1965 to 1967 because no proof coins were minted during those years. They came in sets of five (1c, 5c, 50c, 25c, and 50c) without mint marks. Since they hadn’t been introduced in 1964, nickels of that caliber are categorized as Special Strikes instead, but they’ll still be designated as SMS.

I have 2 1964 Nickel No Mint Mark, PCGS MS67. One Reverse, stairs on top of Monticello is Clearly no lines and the other one is both Obverse and Reverse has dots on it.